Worlds de PEZ: On The Ground For The Road Races!

The first road race is won and done at the World Championships and our man Ed Hood was there rubbing shoulders with the best to get the lowdown on the circuit and the expert’s favorites for Sunday.

Kris was trying to find a spot for his bike at the press centre, he went to lean it against the UCI cabin; ‘no bikes at the UCI office!’ said the security guy.

Kris took a run round the circuit last night and was impressed by the fact that the whole of the 16 K was being cleaned. 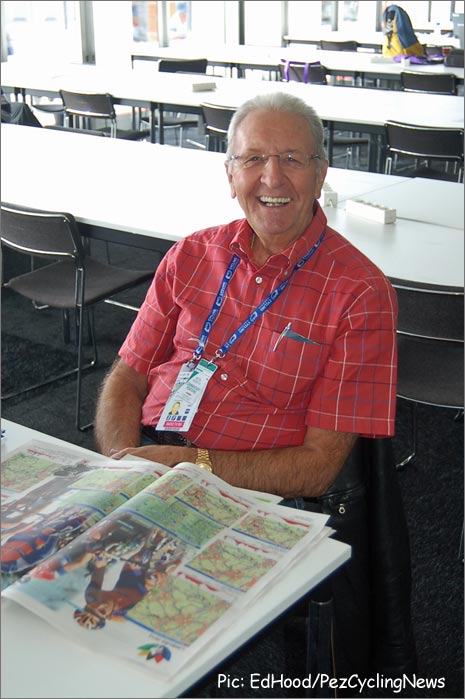 We were chatting to former four times world professional pursuit champion and BBC TV commentator, Hugh Porter this morning and he picked up on that point.

“The circuit is very well surfaced and fast, so I think it’s possible that there might be a bigger group at the finish than people think on Sunday.

At Geelong, two years ago there was a challenging parcours but there was still a big group at the line.

Boonen will be there, Gilbert, Sagan – and I think that the Aussie, Gerrans won’t be far away.’ 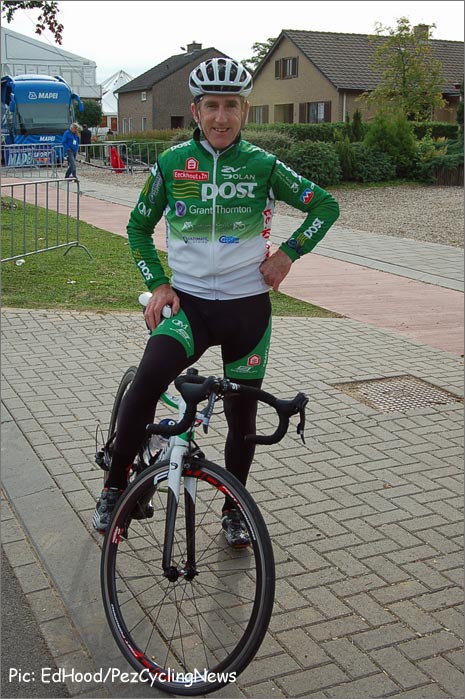 The Spaniards are strong but there’s friction, Contador, Valverde and Rodriguez are all a similar style of rider.

Sagan I’m not so sure about, I saw him the other day and he looked a bit heavy, here,’ patting his backside. 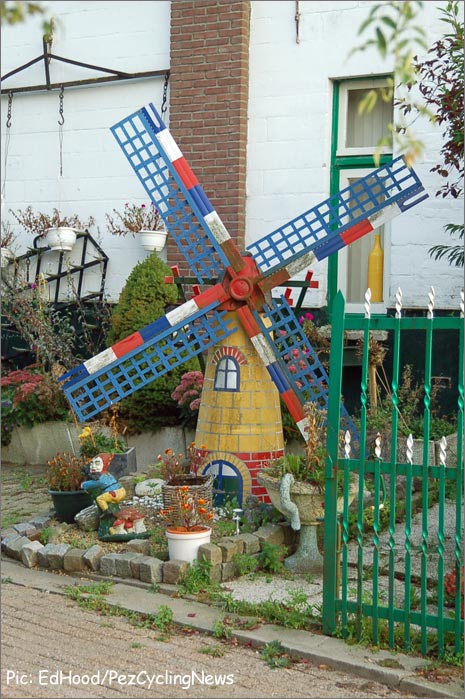 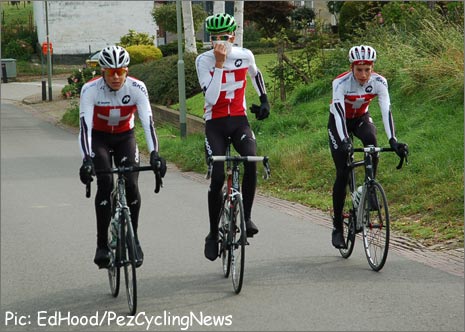 As well as Hugh and Sean, I bumped into the Swiss U23 team on my trek across the fields and past the windmills to the press centre, this morning.

‘Hello’ they said as they pedalled past – nice, polite lads who didn’t stick their tongues out at me like those cheeky GB monkeys, the other day.

We decide that we needed a look at the Cycle Expo at the top of the Cauberg and duly wandered the kilometre up to the tents.

There were plenty of teams training on the parcours – this is a course you can’t know too well. Up at Expo, we noticed that the trend to charge for team post cards continues – five euros.

It’s not how it’s meant to be. 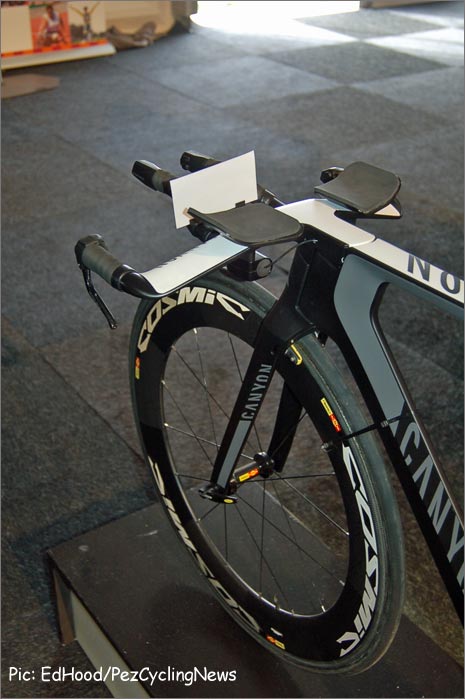 But we liked the Canyon TT bike – mean, neat and looking fast while it stands still. 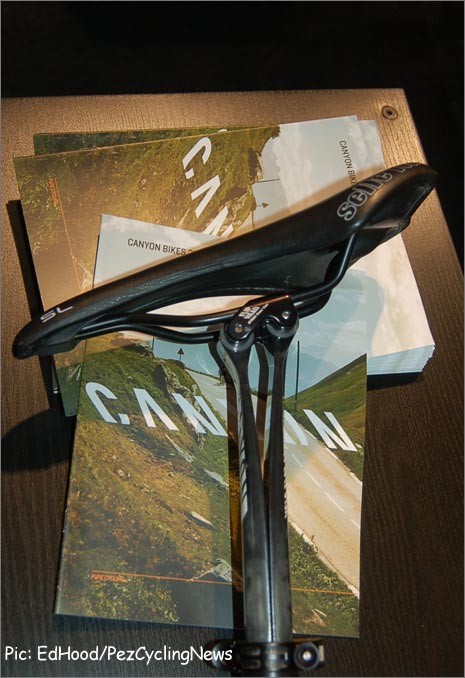 Canyon also had the latest in super light ‘compliant’ seat pillars on display.

This year’s ‘must have’ accessory is a Worlds cell phone cover. 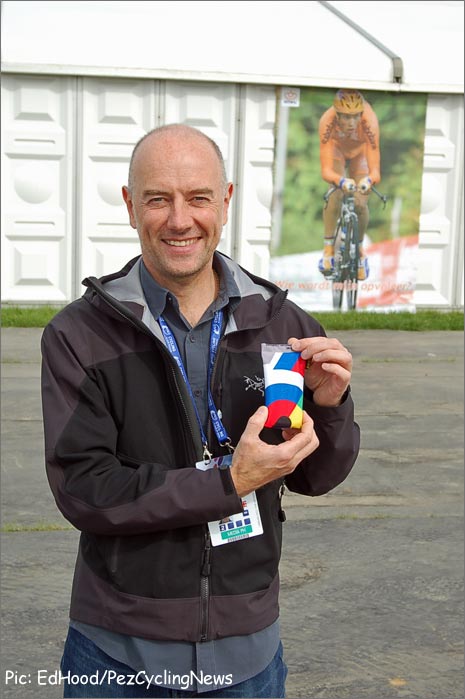 Photog John Young stumped up and will be THE man on the club run when he receives a call. 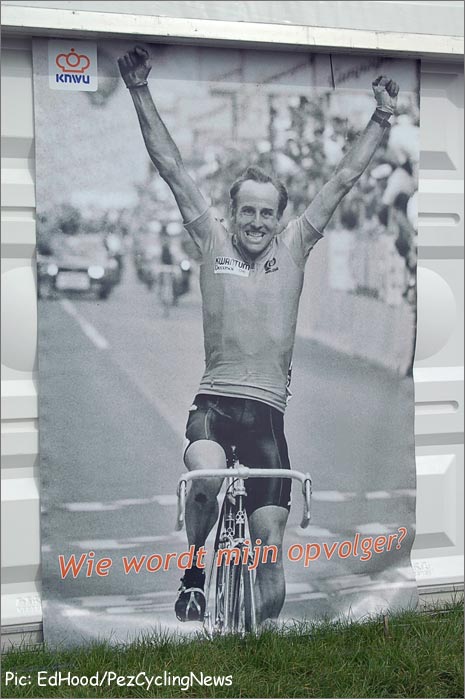 There were some great pictures of the Netherlands finest at Expo; we especially liked the one of Joop Zoetemelk winning the Worlds in Bassano back in ’85.

We were there as ‘Joopie’ rode away in slow motion whilst Lemond and Argentin sat and looked at each other – until it was too late. 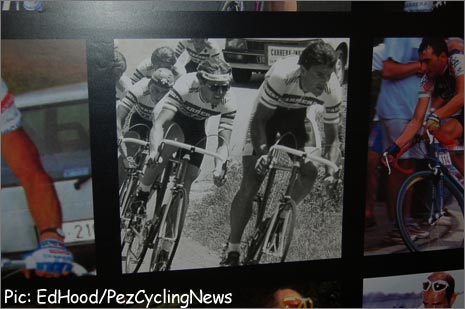 And there was a nice pic of Italian kilometre rider turned roadman/madman big Guido Bontempi leading the Carrera team, ‘back in the day.’ 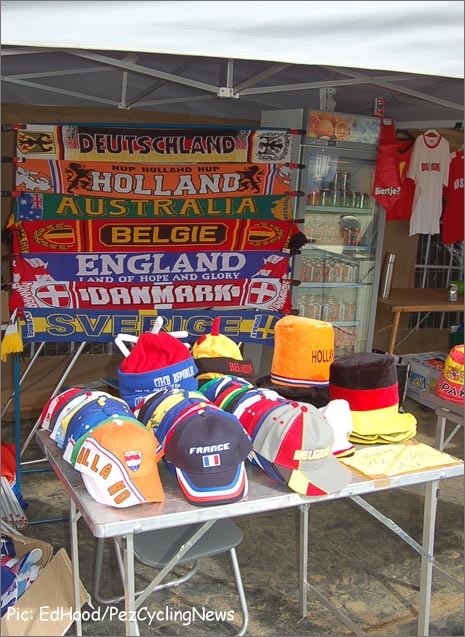 And if you ‘want to get ahead, get a hat’ – or a scarf, to support your nation. 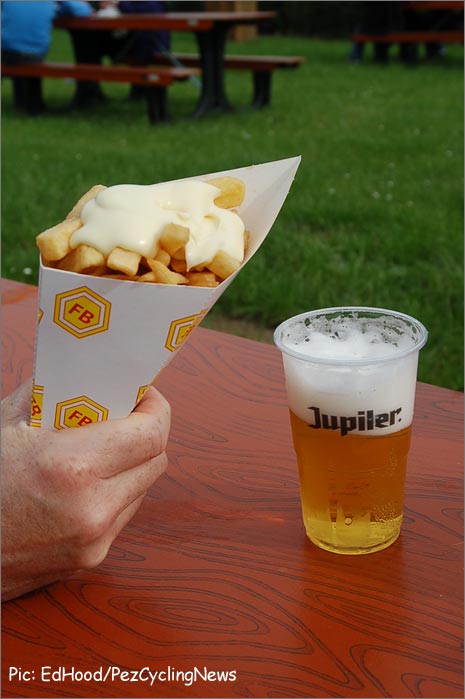 Frites and pils came next; at extortionate prices – but if you can’t stiff the visitors, what’s the point?

Back at the press centre, the junior ladies were gathering for their road race and in a shock move we decided to spectate.

In junior racing the first ritual is the gear check, with a metal ‘U’ track used to check the distance covered by one pedal revolution – the juniors being on restricted gears. 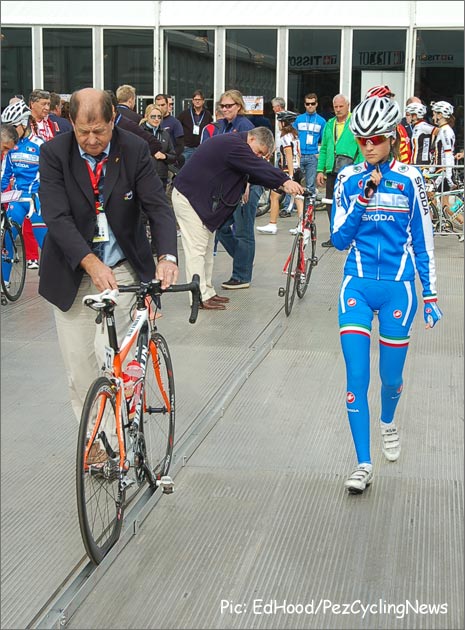 The track is the same colour as the aluminium decking meaning that the photogs keep kicking it and the commissars keep getting upset.

As the Irish photog said; ‘sure, why don’t they paint the thing orange so you can see it?’ 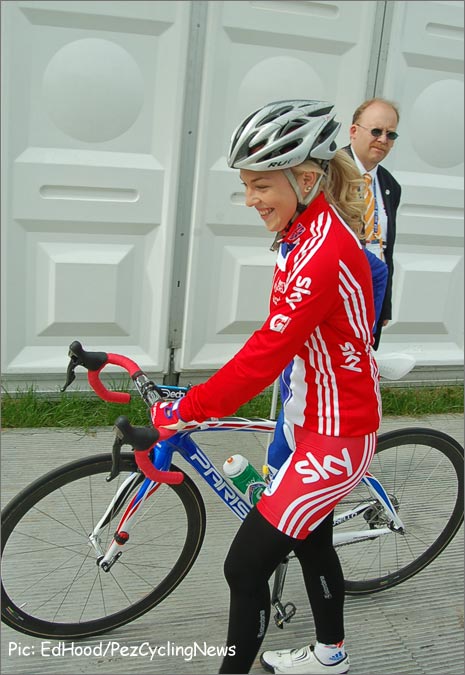 Defending champion Lucy Garner was all smiles – and would be the same at the finish, too. 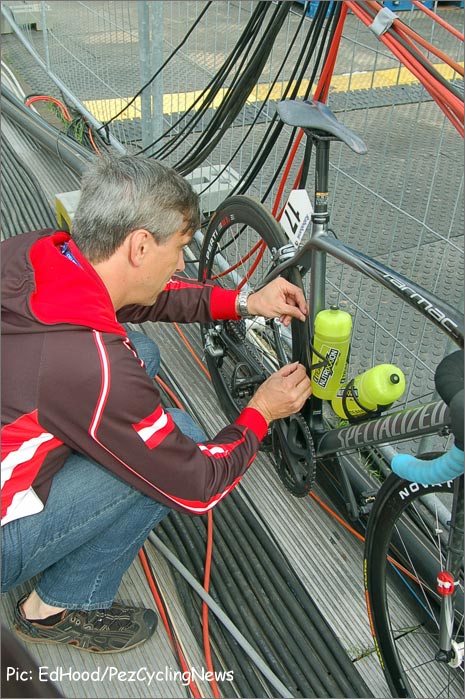 One lass’s bike had worlds bands on the seat tube – high drama, the bands had to be taped up, immediately.

It’s no wonder that folks think the UCI’s sense of priorities is all messed up. 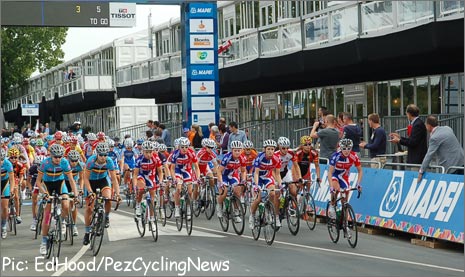 As the girls lined up and the flag dropped, Kris posed the question; ‘how long ’til the first crash?’

Ten minutes was the answer to that one.

For reasons we’re not really sure of, there’s no TV coverage of the race.

This means that sitting in the stands there’s no feed to the TV screens and no commentary, making it impossible to know what’s happening. 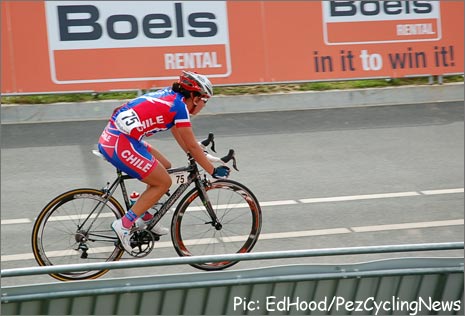 At the end of lap one it was compatto and pretty pedestrian, fence to fence with the Chilean lass last past us @ 4:23.

Lap two and it was a little brisker with the Italians and Dutch on the front. 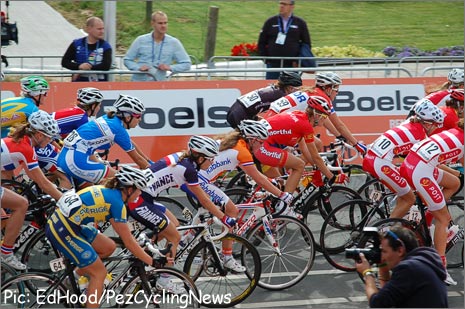 All three of last year’s medallists ride, with Lucy Garner looking to hang on to that rainbow jersey and give GB a ‘double’ to go with Barker’s TT gold.

Hitherto, the only girl to win back to back junior ladies road titles is Nicole Cooke – also from GB.

But as the peloton came through at end of lap three, it was bad news for Lucy – some of her squadra were off the back

‘The cards are starting to get laid down’ says our home commentator as a we hear a break has gone.

The extended mix of Boney M’s ‘Rasputin’ blasts out of the PA as a group crawls past at 11 minutes plus.

Garner is well there as The Netherlands girls drill it on the front, with the field down from 82 to 62. 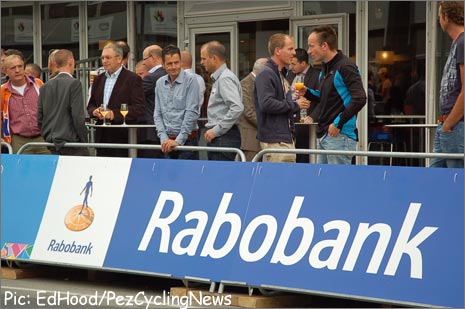 Meanwhile, over at the Rabobank hospitality suite the vodka and orange and orange is going down a treat – the ViP’s having ventured out to hear the bell.

It’s splitting on the Cauberg, we hear – commentary having been re-established. 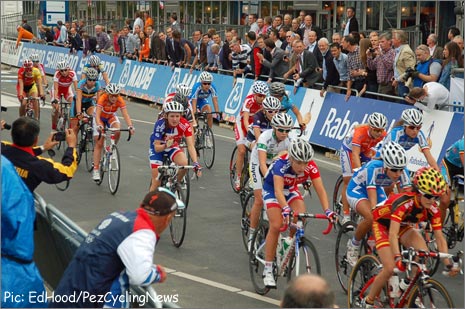 The bell – and the peloton is much reduced to just 27 girls with Garner and Barker both there.

But there are a lot of girls for whom it’s over; including maybe some of Garner’s team.

On the last lap, the commentators can’t tell us what’s happening – we’ll soon find out. 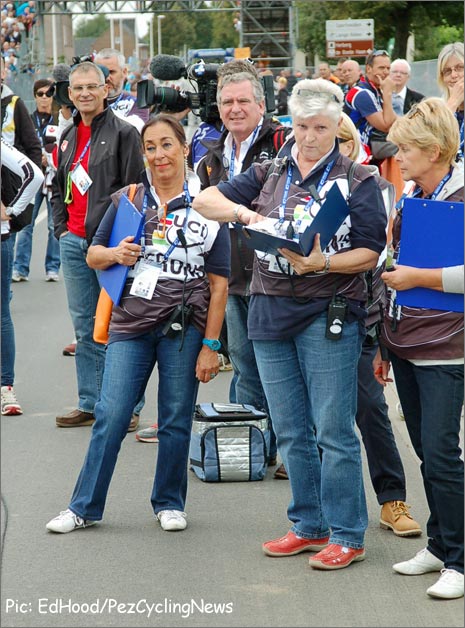 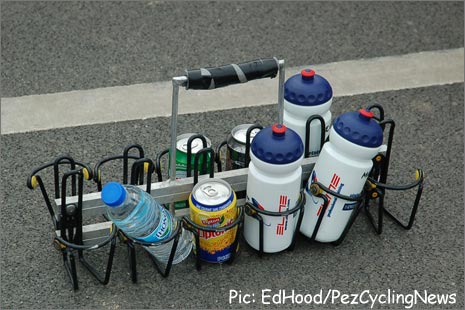 The police cars and bikes blast in, the UCI dope test chaperones are poised, the soigneurs have the drinks ready and the PA tells us that Barker is leading out Garner.

She does it again! 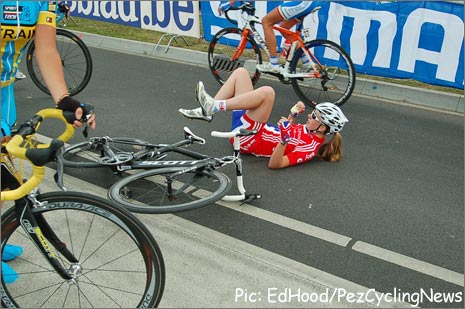 One of her team mates crosses the line and promptly falls of at my feet. 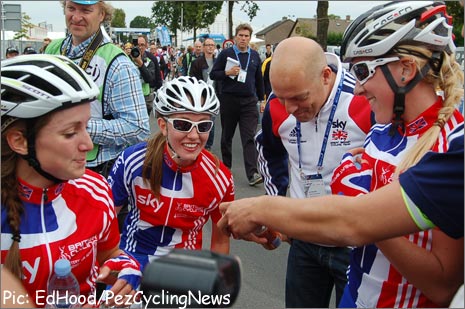 But she’s soon up and celebrating with the other GB girls as GB boss David Brailsford comes across to congratulate them. 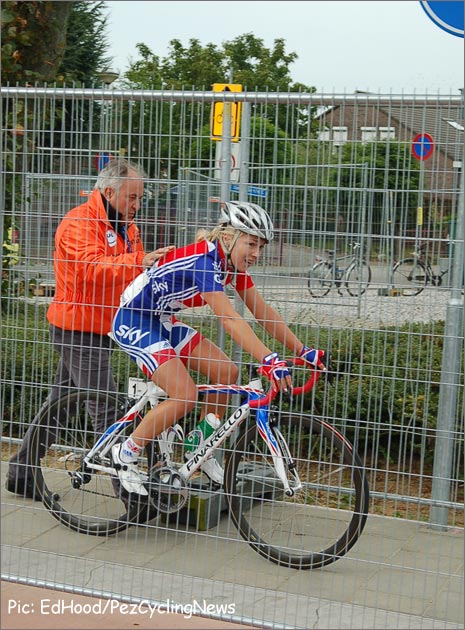 Meanwhile, Lucy is behind bars – but just to protect her from the scrum and get her safely to the podium. 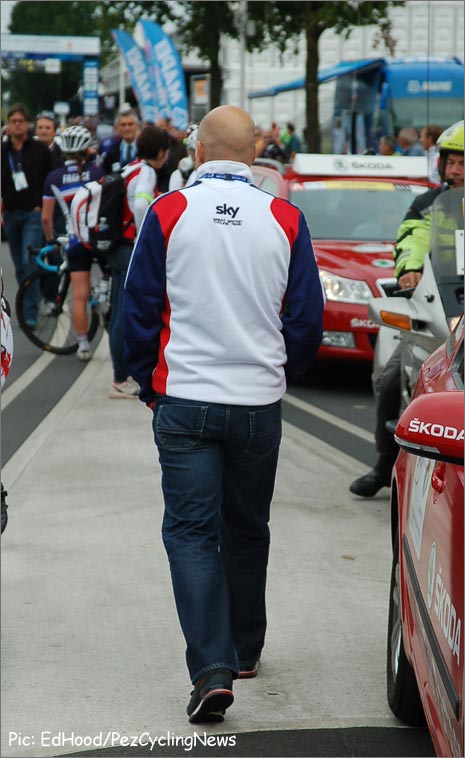 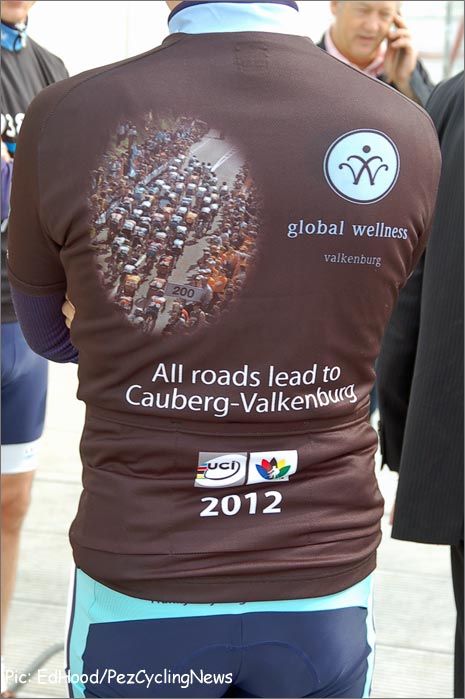 It’s the men’s Under 23 world road race championship tomorrow morning with the senior girls in the afternoon – so remember what it says on this gentleman’s jersey!