A great day of racing at the Worlds saw Tony Martin double up his golds and Taylor Phinney doing the same with silver. To capture this historic day Ed Hood moved PEZ Mobile HQ almost onto the race circuit to bring us all the action. He isn’t just reporting from the roadside this year – he’s living there!

The American commentator may be having a fit and hoping for a US victory in the elite time trial, but out on the false flat at the top of the Cauberg, Tony Martin is calm. 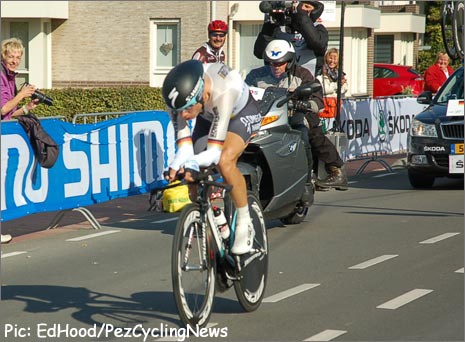 He knows how close it is with Taylor Phinney, the team car is keeping him informed – all his effort is going into stroking that monstrous gear round. 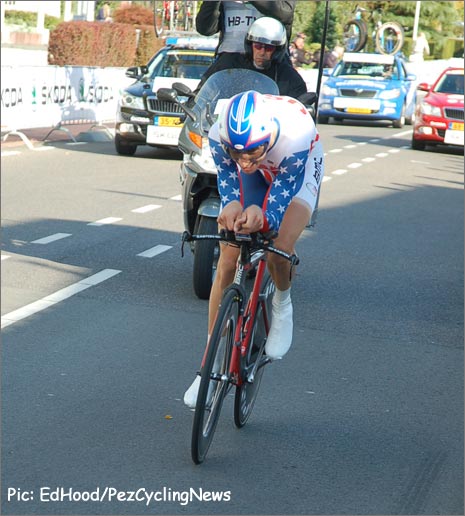 The young American whistled past us just less than two minutes ago – he was on a charge and looking impressive, but Martin’s not ‘Weltmeister’ for nothing.

The German is smooth, focussed; he’s been in situations like this before and drives what we reckon is 58 x 11 through the red kite and along that windy finishing straight, where a rainbow jersey awaits him at the line by a margin of just five seconds. 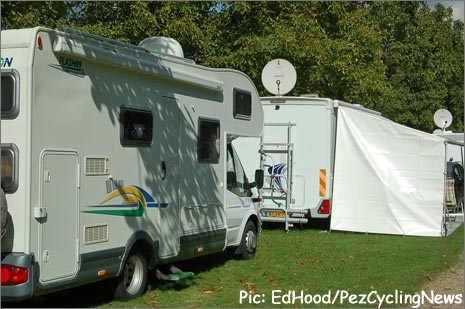 PEZ Limburg Worlds HQ (Mobile) is situated on the elite road race circuit; 12:30 pm and we’re off, leaving the camper for the TT parcours – all of 200 yards away.

There’s a cafe at 300 yards – and time for the first Gulpener pils of the day.

Maybe we could just do the whole gig from here? 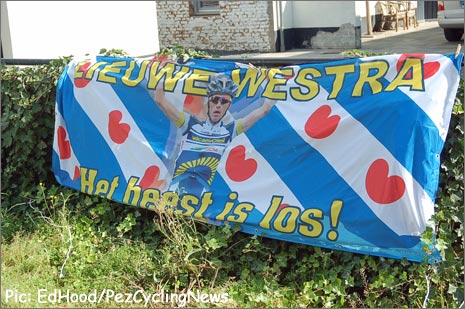 Lieuwe Westra is the local favourite – and with strong recent results a podium is certainly possible. 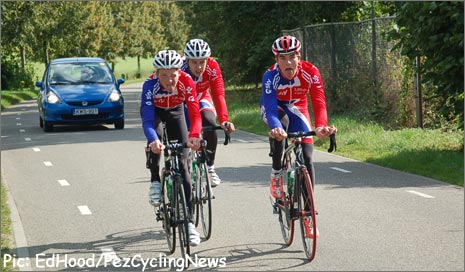 Some of the GB U23 team passed us whilst they were out training; you could see the looks of horror as they realised we weren’t Belgian tourists, but gentlemen of the press – hope you like the picture, lads. 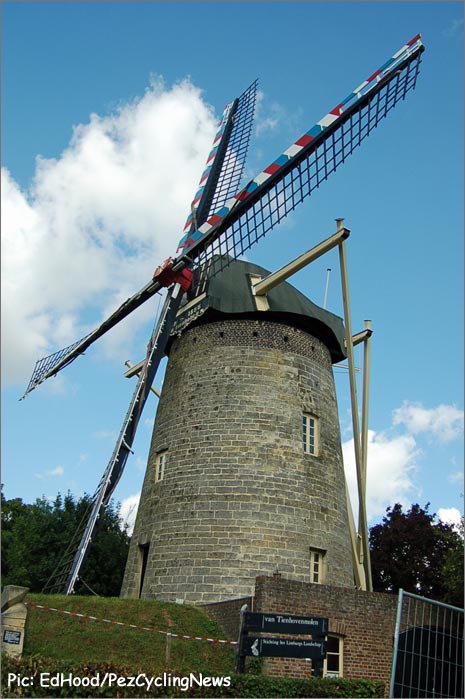 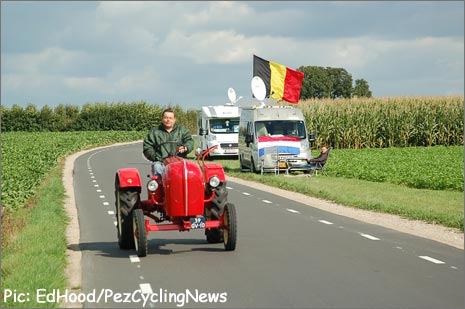 From six K to go through five to four, it’s quick, either flat or downhill with a tail wind past the windmills and fields before a rocket plunge into Valkenburg. 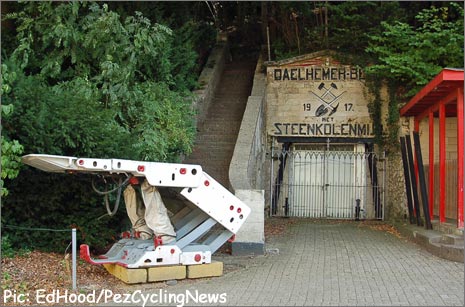 Past the old coal and stone mine and into the bottom of the Cauberg just past three K to go.

It’s chill time; soup and a beer with our first rider – Segundo Navarerete of Ecquador – set to arrive around 14:30 from a 13:30 start.

The rain starts, Segundo whistles past as the temperature drops, the squall stings us and the wind can’t make its mind up on which way to blow. 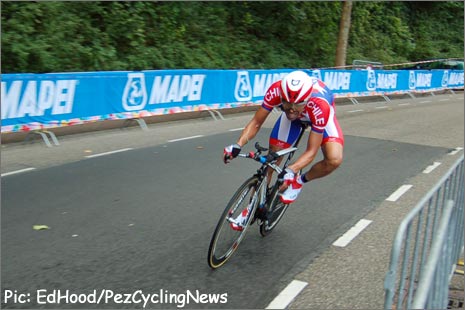 Carlos Oyarzun of Chile hurtles past, he may be from a ‘minor’ cycling nation but he’s not short on nerve, hurtling down the wet descent like a man possessed.

The Norwegian team car passes, but their man Borgersen doesn’t – we’re not sure where he went.

Michael Hutchinson of Ireland flashes down the damp tar to take the left hander on to the Cauberg. 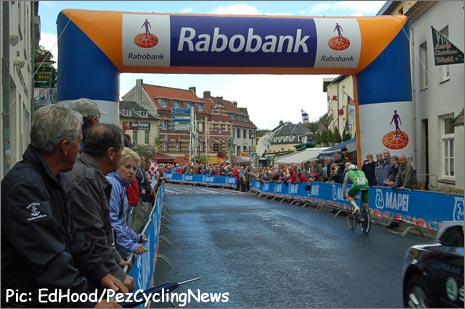 He’s broken the broken the British 10 and 25 mile records in recent weeks with a 17 minute and 45 minute effort respectively, and is practically unbeatable against the watch over British roads.

But today he’ll finish a distant 46th at 5:22; but in fairness, he did ride when the weather was at its worst. 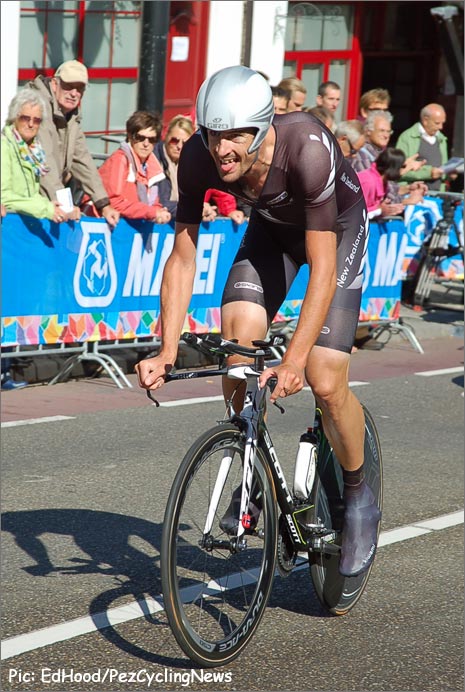 He was in the Orica GreenEDGE squad which took bronze in the TTT and also in the New Zealand team pursuit quartet which took Olympic bronze in London – but today he’ll be 31st. 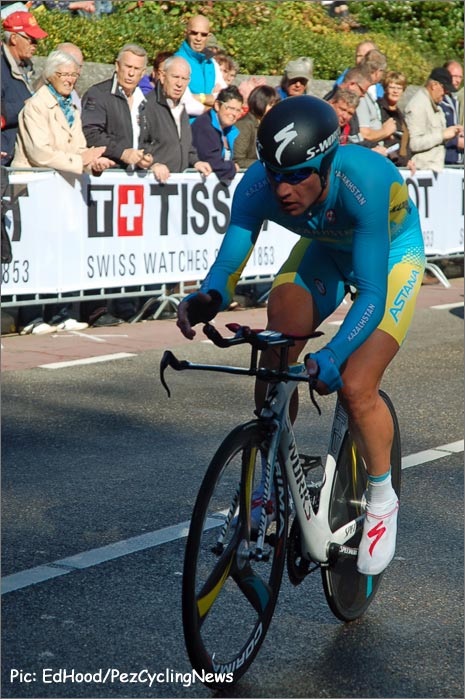 The first man to really impress us is Astana’s Dimitri Gruzdev, the Kazakh TT champion is big strong and purposeful – and soon the PA tells us he’s gone top. (he finished an eventual and surprise 6th) 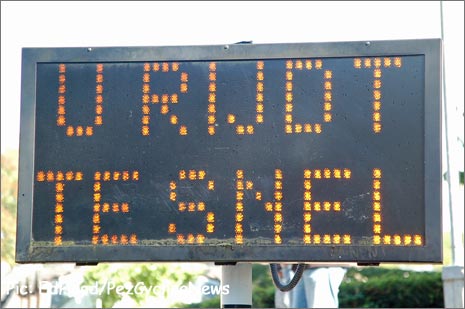 And that’s despite the road sign telling him to ‘watch his speed.’ 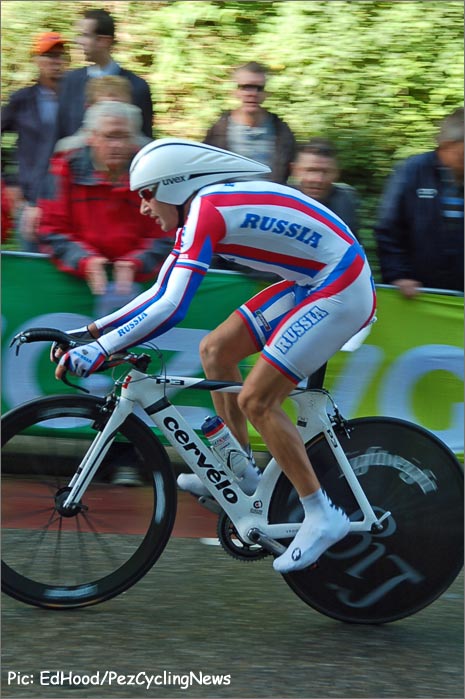 We’d expected better than 29th for Rusvelo’s Sergey Firsanov, his style was solid and aggressive and he’s been a big winner in his native Russia, this season. 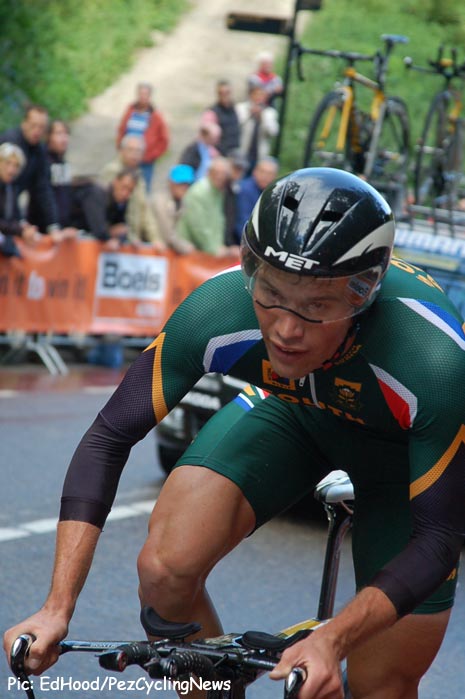 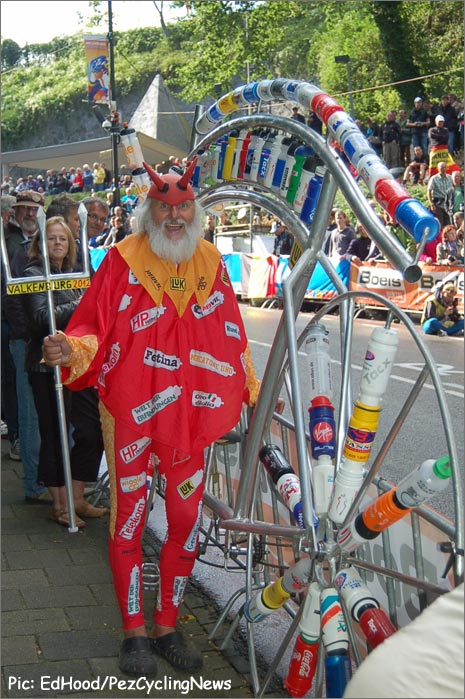 Janse Van Renseburg kept the flag flying for the Republic of South Africa but didn’t make the top half of the result sheet – and that was despite Didi being there to lend support. 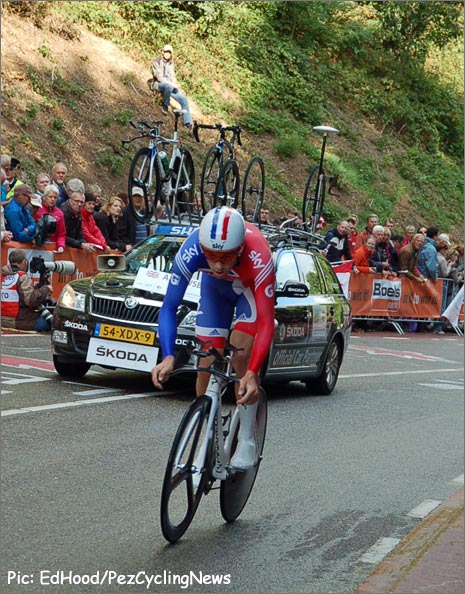 Former European U23 TT champion, Alex Dowsett of GB and Sky was on a charge, out of the saddle attacking the climb then back in the saddle to pedal the last part of the ‘S’ – 8th was his final position. 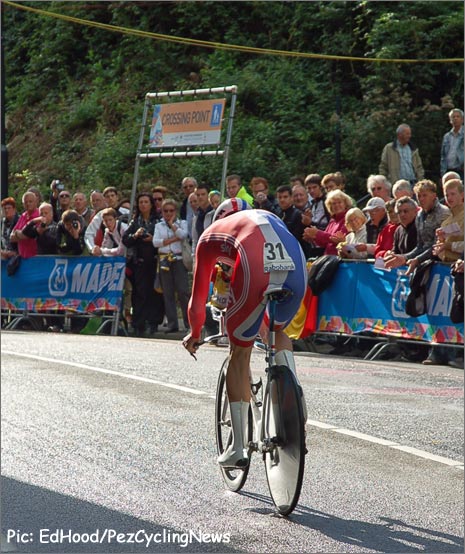 He’ll finish higher than that before his career is finished. 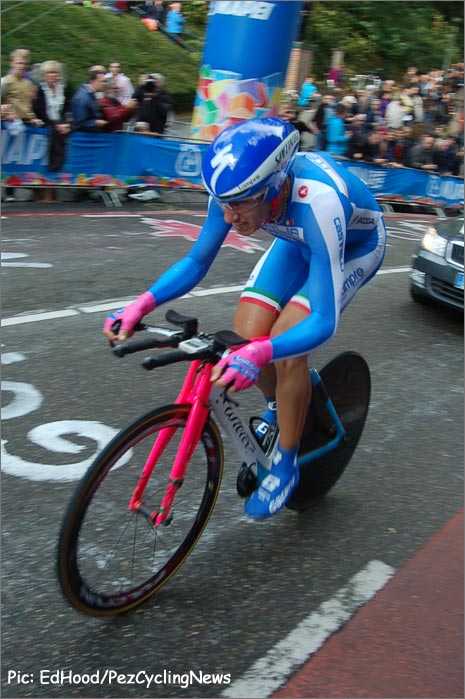 Right behind Alex, but down on him, was Italian former world U23 TT champion, Adriano Malori proving that Lampre riders can actually go quite well on his way to 10th place. 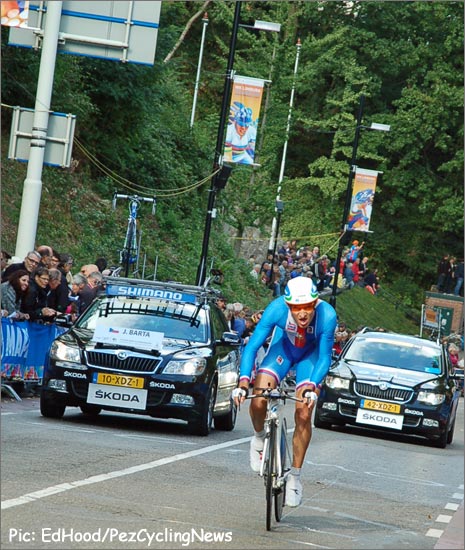 The commentator hadn’t heard of the next man on a charge – Jan Barta of the Czech Republic and NetApp.

But we had; we were there when he was second in stage 14 of this year’s Giro – he also won the Coppi-Bartali stage race, Rund um Koln and his nation’s individual time trial championship.

An eventual 7th was another good result for the German team. 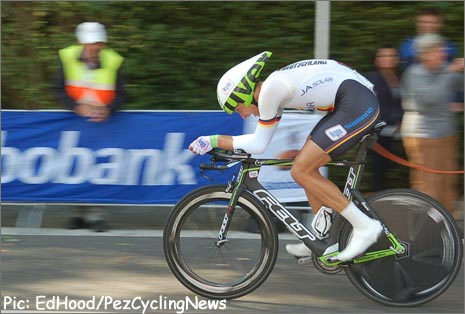 On the subject of German’s, Patrick Gretsch looked ‘the biz’ for Argos Shimano, but the watch wasn’t impressed – 27th @ 3:48 was the verdict. 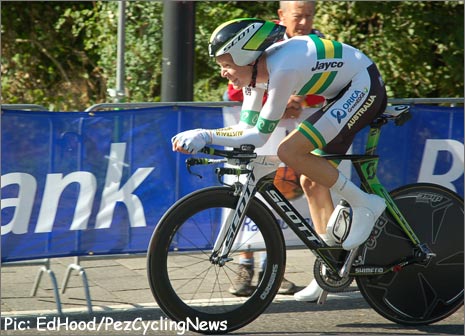 Cameron Meyer looked tidy and had good cadence, but the Aussie flyer wouldn’t make the top 10. 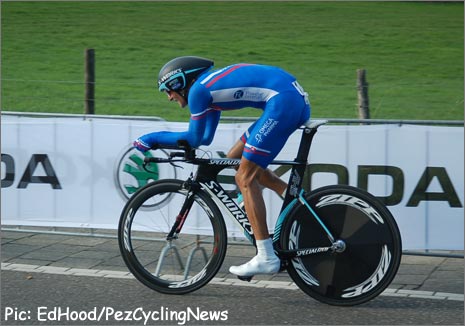 Peter Velits is a man who can ride a good TT; the former world U23 road race champion is Slovakian champion and was in the winning QuickStep TTT squad on Sunday but was way down the field, today. 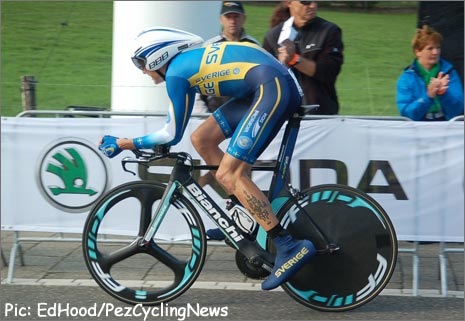 Another man putting on the style but just scraping into the top 20 was former Olympic TT silver medallist, Gustav Larsson of Sweden and Vacansoleil.

But it was that kind of day, favourites left trailing. 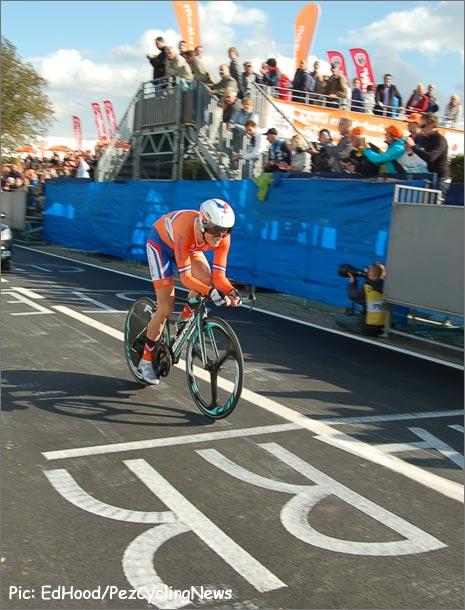 Take Netherlands TT champion, Lieuwe Westra; he won the TT and GC in the Tour of Denmark, but today he was nowhere.

The weather had a lot to do with it – it was like Scotland with ‘four seasons in one day,’ rain, cold, wind and bright sunshine. 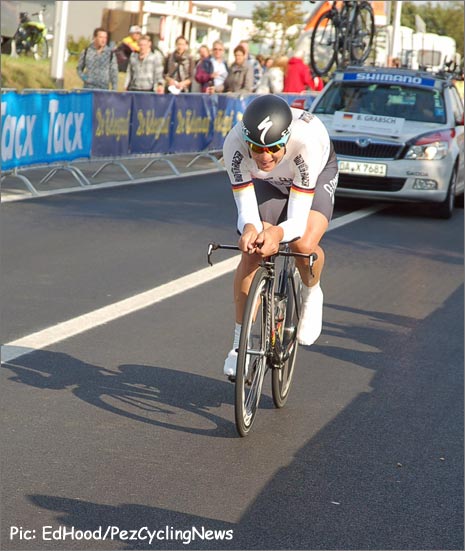 When we saw former world TT champion Bert Grabsch, it was on the gentle drop into the red kite and he was motoring on a mega gear – but those massive legs of his weren’t designed for the Cauberg and he too was well off the pace. 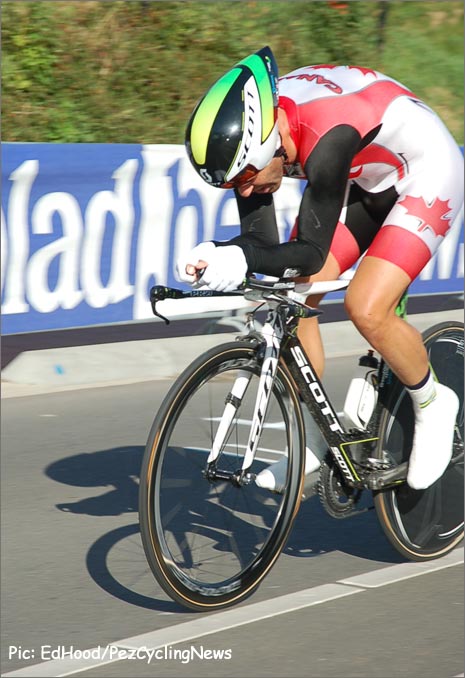 Svein Tuft is another big strong boy, he’s been second in the Worlds TT before, but today he was one more failed favourite – 12th for the big GreenEDGE Canuck. 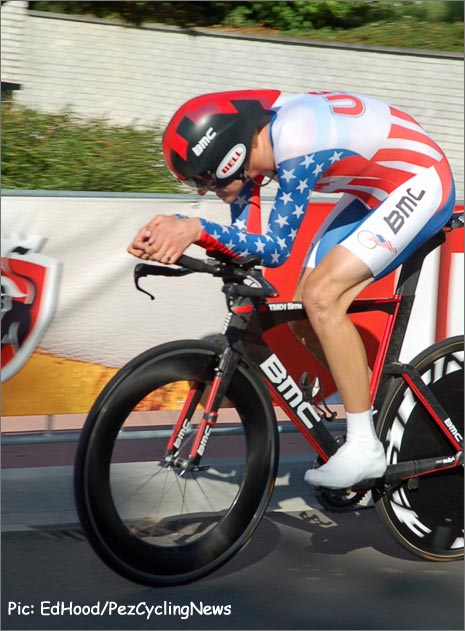 The USA and BMC’s Tejay van Garderen (4th) impressed us; by the time the last riders were coming through we were almost at the red kite and the top seeds like van Garderen really were motoring.

The bad news was that Marco Pinotti crashed when on a really good ride – a shame, as well as a top chrono man he’s one of the good guys.

Phinney was looking much better than when we last saw him – hurting bad on the Cauberg on Sunday as Tejay tore the BMC team to shreds.

For a big man, he’s aero and if his progression continues, he’ll wear that rainbow jersey with the watch on it, one day. 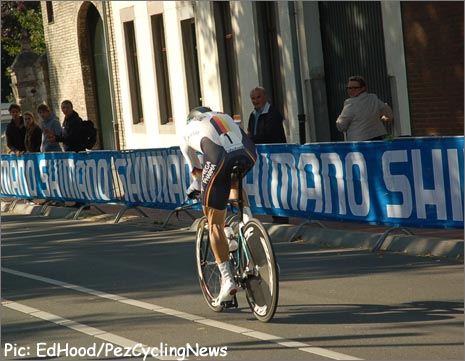 And his second title in four days. 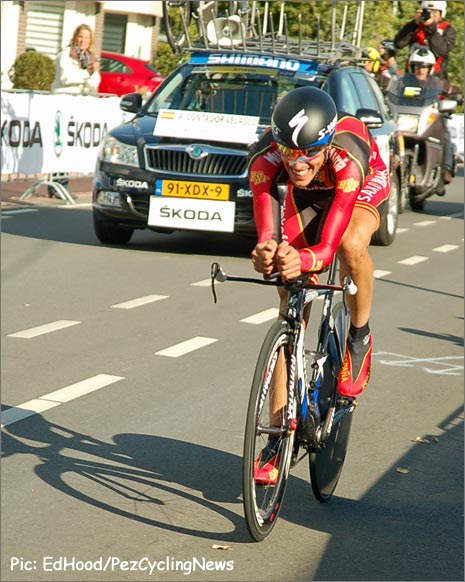 There was just Alberto to come – Martin having caught and dropped him for two minutes – and as Al Hamilton said; ‘forget what I said about Alberto as an outside bet!’

And respect to Vasili Kiryienka, he caught us all out with that bronze medal.

But last words to the ‘Kaiser;’

‘There was a lot of pressure on me to win again, I said; “I just have to ride,” but it was not so easy to win.

Sometimes you have the power in your legs and sometimes you do not for a race like the World Championship that is just one day. I happened to have good legs.

This course was harder than I expected, but I did my best to win for the team despite such a hard final. I had nothing left at the end. I also have to give credit to Taylor, who rode the perfect race today.

I am so happy for my victory and to be World Champion again.”

And all QuickStep need now is for Tom to make it a hat trick on Sunday.