Worlds Preview: A Taste For Excellence

What better way to preview the Worlds than to ask a man who knows the region like the back of his hand? Peter Easton from Velo Classic Tours takes us through an in depth look at the region of Limburg in the Netherlands which hosts this year’s race. It’s Worlds time!

Dutchman Michael Boogerd has probably never seen a fleck of broken glass that hasn’t triggered a nightmare of memories from a cold wet October day 14 years ago. Four kilometers from the base of the climb of the Cauberg in the small Dutch village of Valkenburg-the signature ascent in the 1998 Road Race World Championships-and six kilometers from the finish line of what looked liked a rainbow jersey for the host nation’s hero, Boogerd’s chance of victory slowly drained like the air from his rear tire, a slow leak ruining his title hopes on a day when he surely looked and felt the strongest of the elite breakaway.

Alongside Belgian Peter Van Petegem, Italian Michele Bartoli and the Swiss duo of Oskar Camezind and Niki Aebersold and a reborn Lance Armstrong, Boogerd screamed for the neutral service car as he frantically flashed his arm in the air, the reality of any assistance proving fruitful as deflating as his now flat rear tire. Boogerd tried in vain, but he eventually crossed the finish line in sixth place behind Armstrong and Aebersold. 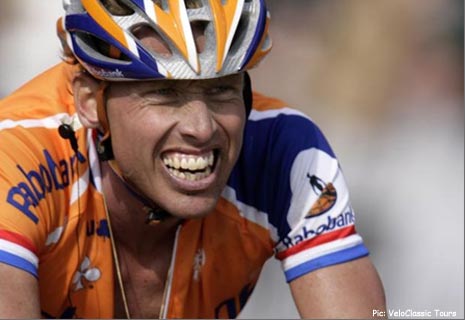 From the podium, as silver medalist Van Petegem stared emptily out across the crowd and bronze medalist Bartoli brooded and sulked, Camezind gladly accepted the gold medal and rainbow jersey of what would become an artificial victory, admitting years later to doping and exiting the sport in disgrace. As reporters shoved their microphones into Boogerd’s dirt covered face, his mechanic tapped him on the shoulder and held out the fleck of glass he had pulled from his tire. Victory, alas, eluded him by the tiniest of margins. And while a victory in the Amstel Gold Race on the same roads the following spring may have temporarily softened Boogerd’s nightmare, a world title eluded him for the remainder of his career. For the Dutch, and the region of Limburg, cycling is an integral part of the lifestyle, and there would be no greater reward than to crown a Dutchman the 2012 World Champion. 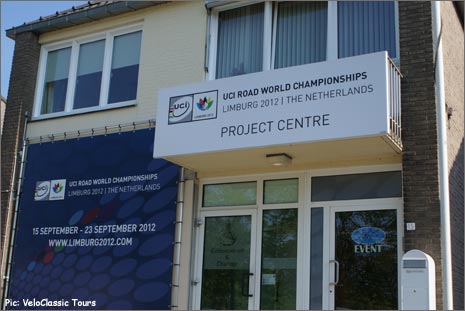 As the dog days of August disappear and the Vuelta has crowned its champion, riders are moving in two directions. There are those riders who have had a successful season and have secured a contract for next year, and there are those scrambling for results in the waning weeks of the season in an effort to secure a contract for next year. The Vuelta a Espaсa, Clasicб San Sebastiбn in the Basque Country, the GP Ouest Plouay in France and the Vattenfall Classic in Germany all provided opportunity for success. All however seem to be in preparation for a shot at the rainbow jersey, the World Championships. 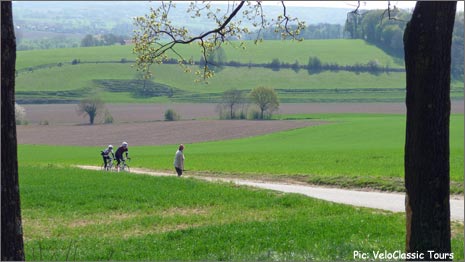 The races that comprise the UCI Cycling Road Race World Championships return to southern Holland for the first time since Boogerd’s rain soaked nightmare. And the host city of Maastricht and the neighboring village of Valkenburg are well suited for the pageantry that surrounds the UCI’s flagship road events, with the sports biggest dignitaries and personalities convening for a week that culminates with the 266 kilometer Men’s Road Race Championship. Well known as the host location and finish for Holland’s biggest cycling event the Amstel Gold Race, the region of Limburg is as perfect as any for cycling. 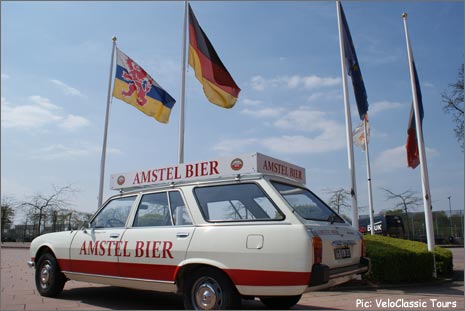 The Province of Limburg has always had strong ties with competitive cycling. As early as September 1869, “a speed trial on wooden velocipedes” was held in Maastricht, which was most likely the first cycling race in the Netherlands. In 1895, Dutchman Mathieu Cordang entered the history books as the first Limburg inhabitant to become a world champion as the rider from Blerick won the amateur motor paced world championships title on the track in nearby Cologne. Cordang, who also enjoyed success at that time as a road racer- finishing runner up in Paris-Roubaix to Maurice Garin in 1897 after he fell in the velodrome and second in Bordeaux-Paris also in 1897 – holds the honor of being the first of a succession of Limburg riders who achieved success at the highest level and who helped script an important chapter in the history of Dutch cycling. 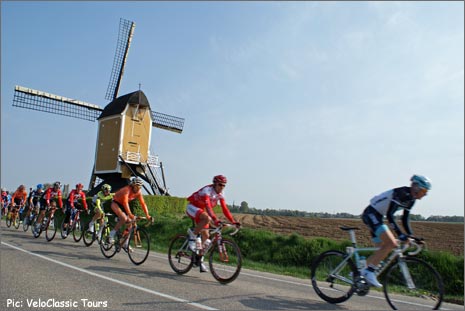 While it is true most of Holland is flat, this southern most part is littered with hills that are crisscrossed with the tiniest of roads- a landscape that is as beautiful for cycling as it is utilitarian for farming. The capital of the region, Maastricht, proudly hosts the Amstel Gold Race every April, and the region has hosted the worlds four times: 1938 won by Belgian Marcel Kint; 1948 won by Belgian Classics legend Briek Schotte; 1979 won by the bespectacled Dutchman Jan Raas and 1998 won by Swiss Oskar Camezind. Additionally, the nearby town of Heerlen hosted the Road World Championships in 1967, where Eddy Merckx won the first of his three elite men world titles. 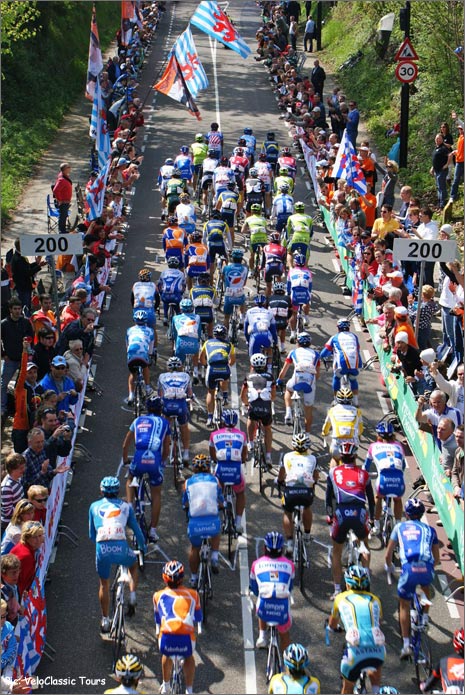 The region itself boasts numerous hills, small farm tracks and tight turns, all an anomaly in the otherwise flat landscape of the country, and all of what make up the challenge of the Amstel Gold Race, and for this year, the world championships. Aside from the 1200 meter Cauberg- which has an average grade of six percent and a maximum grade of twelve percent and ends 1600 meters from the finish line-the other ascent on the road race circuit is the very picturesque Bemelenberg, which at a maximum of seven percent and just under a kilometer in length is not tortuous, but can take its toll after ten ascents. For the road race, while the majority is raced on the traditional circuit, there is a 100 kilometer loop that starts in Maastricht and is ridden over much of the same route as the Amstel Gold Race before entering Valkenburg and onto the 16.5 kilometer circuit.

The Maastricht-Valkenburg corridor blends seamlessly as one leaves the urban environment of Maastricht. In only a few kilometers, the sites and smells of the local farms, with fields brimming green and ochre, lead to the small Roman village of Valkenburg. One of the most interesting sites in town for a cyclist is the recently complete Amstel Gold Race Xperience Center. 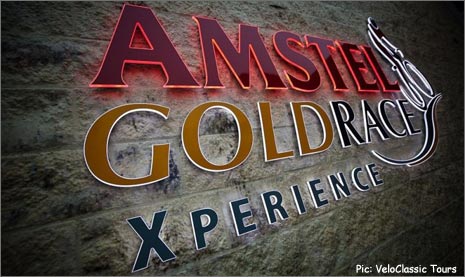 The building, a few hundred meters from the start of the climb of the Cauberg, explodes with the history of the Amstel Gold Race and cycling in Limburg, with its walls covered with photos, television screens running race footage, and interactive displays that connect visitors with the very essence of what makes the race so great- the landscape and the people behind it, especially race director Leo Van Vliet.

Loosely modeled on the Tour of Flanders museum in Oudenaarde, Belgium, the Amstel Gold Race Xperience is less about being a museum and more about being a meeting place for cycling enthusiasts. The building is attached to a sporting complex and gymnasium, offering access and usability year round, another commendable effort by the organizers to keep the Amstel Gold Race and cycling in the region as the athletic pulse. 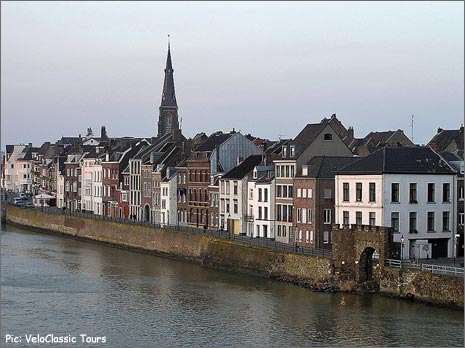 The city of Maastricht is a vibrant and lively city, anchored by the university population and linked with a series of public squares that bristle with energy. As historic as the city is-dating back to Roman settlements- there is no shortage of modernity inside its cobbled center and this is best expressed at the Kruisheren Hotel. A former church and cloister, the hotel has been sensitively constructed inside the existing structure to provide an elegant atmosphere that has perhaps the most unique wine bar and dining area in the city- inside the church’s nave, with the dining area on a mezzanine above the wine bar that sits in the church’s apse. 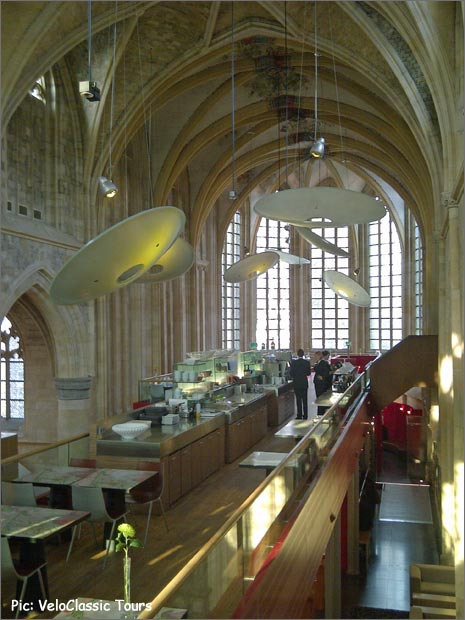 The central courtyard that is wrapped by the existing cloister is a perfect pace for social functions, enjoying a drink or just to relax, the latter something I don’t sense will happen too much with the hotel hosting the UCI’s contingent of international personnel during the World’s week. And, like most Dutch in this area, the staff are always excited about all things cycling, having hosted a radio talk show during the lead in to the Tour de France in Liege this summer and initiating an introduction local favorite Bram Tankink of Rabobank, who is excited to join us as a special guest next spring. 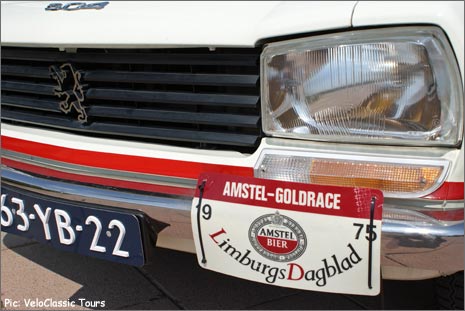 On the eve of this year’s World Championships, the host city of Maastricht continues to bustle with the anticipation of the racing, while remaining fully in the moment of enjoying the best food in Holland. For this one week during September, the dignitaries and cycling personalities will be exposed to the best of what cycling and Maastricht have to offer- a unique environment, a challenging landscape for great cycling and racing, and exceptional food to satiate all tastes. It would be hard to argue with the UCI if they decided to bring the World Championships to this region more than every 14 years. 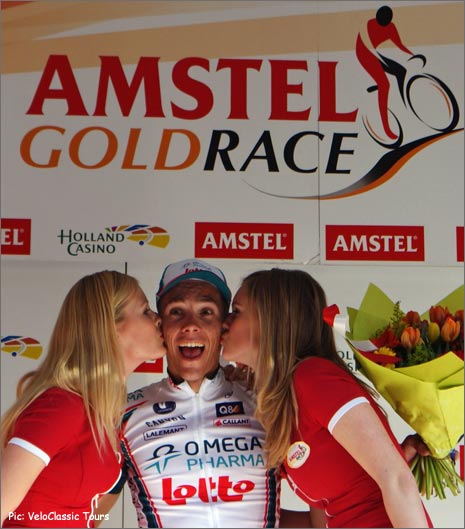 Special thanks to Peter Easton of Velo Classic Tours for this look at the region.
Get more info on their cycling trips at VeloClassic.com