Race Report: Germany’s Judith Arndt showed her style and class in the Woman’s time trial by giving the others a resounding beating on the tough Valkenberg course. The podium was close until the smooth pedalling Arndt powered up the Cauberg putting over 30 seconds in to Evelyn Stevens for her second TT title.

The 24.1 kilometre Elite Women’s individual time trial has the same finish in Valkenburg as all the other races, but the run-up is quite different. From the start in Eнjsden the first climb comes after 7 kilometres, the Gronsvelderberg has an average gradient of 3.5% on its 2100 metre length, and then the route undulates before a quick descent to the start of the Cauberg and its1200 metre 5.8% ramp.

Britain’s Elinor Barker won the World’s Junior Women’s TT in the morning over a 15.6 kilometre course, beating Denmark’s Cecile Uttrup by 36 seconds and Demi de Jong of Holland by 1:03. Last year in Copenhagen Barker took silver and she had aimed at gold here all year. 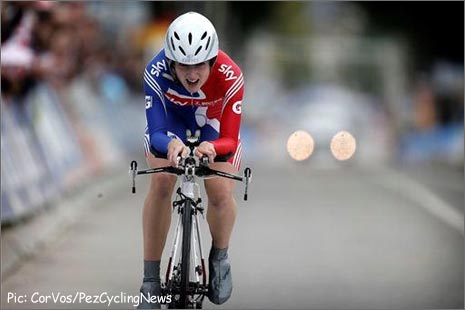 Barker dominated this morning’s race with a powerful ride.

Forty-two women lined up to battle for the World medals, representing twenty-eight different countries. First rider off was Semra Yetis of Turkey who rode round in over 40 minutes for the slowest time. The early leader was Martina Sablikova from the Czech Republic with a time of 34:24.9, which was good enough to keep her in the hot seat for a long time. At the first time check Sablikova recorded a time of 15:46.68 after 10. 7 kilometres, at the second check her time was 23:17.36. The first rider to beat Sablikova was Ina Yoko Teutenberg of Germany in 15:36.04 and she was also faster at the second check with 23:10.01.

The climb of the Cauberg was giving the riders some problems; many gave up on their aero positions and resorted to holding the top of their bars at the hardest points.

At the finish a handful of riders had come in close to the time of Sablikova; Italy’s Elisa Longo-Borghini, Carmen Small (Canada) and Natalya Boyarskaya (Russia) were close, but just not fast enough. Teutenberg powered up the Cauberg out the saddle and crossed the line in 34:00.2 for a new best time.

Out on the course, Teutenberg’s German team mate; Trixi Worrack was also faster than Sablikova at the first time check, but she had slowed at the second. It was Dutch hope; Eleonara Van Dijck who was thrashing the competition, 20 seconds faster than Teutenberg and over half a minute faster than Sablinkova and Worrack. By the second check she had 35 seconds on the others and at the finish she slowed and lost 10 seconds. Next to finish was Van Dijk to take the lead with 33:20.47.

Evelyn Stevens (USA) was also on a flyer, she clocked 15:02.29 which was equalled by Britain’s Emma Pooley, well 0.56 faster at the first check. Villumsen was faster than Stevens but not as fast as Pooley. Evelyn Stevens came in with the new fastest time of 33:00.23. Pooley also slowed for a final time of 33:15.

New Zealander; Linda Villumsen looked to have lost all her speed on the Cauberg, but managed to push onto the podium and even with Arndt coming in behind he she took the bronze medal. 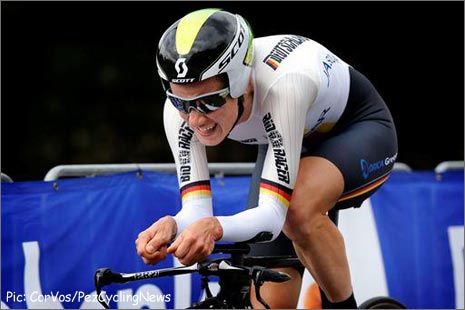 Big favourite Judith Arndt was last off and rode smoothly through the first check with a time of 14:55 and 22:06 at the second and was leading by a good 10 seconds. On the climb of the Cauberg Arndt looked by far the better rider, smooth and strong, as expected her final time of 32:26.46 was good enough for the World time trial championship rainbow jersey for the second time. 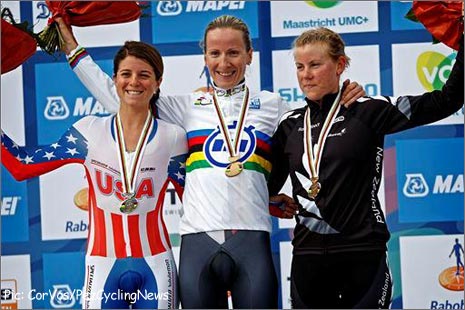