Race Report: The Elite Women’s road race was looking like it was going to be a fairly open event. That was until Marianne Vos crossed to the break at warp speed, rode hard with them and then left them all for dead on the last ascent of the Cauberg. Good, exciting racing with a home win thrown in.

The Elite Women ride the same course as the Under 23’s, but for only 128.8 kilometres that also include the 5% Bemelerberg and the 5.8% Cauberg before the finish.

By the time the women’s race got under way the temperature had risen to a comfortable 15єC, with a slight breeze, so pretty well perfect for a bike race. As in all the road races there were many favourites and as no one is sure if the course can split the field, the result could go anywhere. Winner of the last two women’s World championships; Georgia Bronzini (Italy) has said she had been ill during this week, so maybe not her, but there are many more on the start line with a good chance of a rainbow jersey. 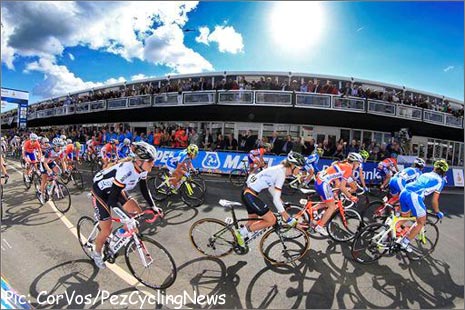 The women raced under near ideal conditions today.

The first lap was held together by USA and GB, with Italy and Germany also watching for any moves. Up the Cauberg for the first time and the pace was steady with the US riders very much in control and the peloton crossed the line together.

Same story on the Bemelerberg; all together. US still to the fore with Germany, Holland and Belgium next in line. Coming into the end of the second lap and nothing had happened, apart from crashes, first Robyn de Groot (South Africa) at the bottom of the climb, it looked like the rim on her rear wheel just snapped. A bit further up the climb and half the bunch crashed due to a Czech rider hitting the wheel of an Italian and the peloton was in pieces, the leaders crossed the line in 50:13 for 2 laps of 32.2 kilometres. 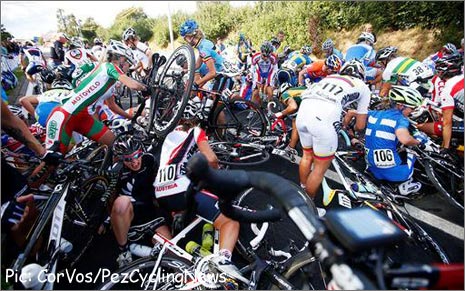 Which one’s my bike?

The chaos had riders spread all over the Cauberg, the lucky ones managed to regain the bunch, the others…

Cooke and Pooley (GB) sat on the front while no one knew what was happening behind. Up the Bemelerberg, after 40 kilometres ridden, Guarnier (USA) made a little dig over the top, but nothing serious. Riders were still climbing the berg over 4 minutes down.

Third time up the Cauberg and the bunch had grown with many of the affected riders regaining the peloton, across the line Kristin McGrath led through as things seemed to have calmed down a bit. Leos Gunnerwald (Holland) was the first to make a proper attack, it lasted a couple of kilometres before the German team closed it down.

The German and Dutch teams were keen to make the race, but no one was willing to put in a 100% effort, so the front again became a mix of all nations up the Bemelerberg.

Lucinda Brand (Holland) attacked at the crest of the Bemelerberg, again the German team had her back in the fold, for the next Dutch rider, Adrie Visser, to try. Other riders crossed to her to give us six away at the start of the Cauberg.

At the top there was only four of the escapees left, Visser (Holland), Canteli (Italy), McGrath (USA) and Pankova (Russia), but the bunch was coming back to them and down the other side it was all together again.

Amber Neben of the USA made life a little harder for some and caused a group to form off the front before the Cauberg, she was joined by Charlotte Becker (Germany), Rossella Ratto (Italy), Anna Van Der Breggen (Holland) and Rachel Neylan (Australia).

At the top, the five had 30 seconds on the peloton after 80.5 kilometres and 2 hours and 3 minutes of racing with 3 laps to go. The bunch, at this point, were not chasing and considering that GB, Belgium, France, Russia and the others had missed the boat things were getting dangerous.

Amber Neben was the main protagonist in the break, everyone except Van Der Breggen was doing their share of the work, behind no one was taking the initiative, in fact, Italy and Holland had closed the bunch down.

At the top of the Bemelerberg, Neben was at the front and Van Der Breggen was at the back and the lead was 41 seconds.

Up the Cauberg again and Marianne Vos (Holland) attacked the bunch and crossed to the leaders in no time, she was followed by Elisa Longo Berghini (Italy), at the top with 2 laps to go the lead was 15 seconds to a chase group including Pooley (GB) and the bunch just behind them 7 seconds farther back.

Germany’s Trixi Worrack needed a bike change and had 3 other riders to pace her back, Russian Pankova was stuck between bunch and break as the lead tipped over 1 minute with one and a half laps to go.

Van Der Breggen was now riding hard on the front for Vos and at the top of the Bemelerberg the lead to Pankova was 1:34 and the bunch at 1:56. It was looking like the race was over, although a group was trying to form a chase (to no avail).

Up the Cauberg for the penultimate time and Vos made a jump, Longo Borghini held her and Neylan gets to them and then jumps to get rid of the Italian girl; Longo Borghini and make sure the others don’t get back.

It nearly worked as they were shot of the German Becker and Italian Ratto, Holland still had two riders up front with Vos and Van Der Breggen, plus Neben, Longo Berghini and Neylan, the bunch was too far down to have any hope.

The two Dutch girls had to do the work for the break as the others were not interested in using any energy, and why should they? For sure the podium was going to come from these five riders.

Vos rode on the front up the Bemelerberg for the last time with 8 kilometres to go, Neben was sitting on the back as Longo Berghini and Neylan wanted advice from their team cars, I would guess it would be to do nothing till the Cauberg or wait for the sprint.

Van Der Breggen rode off the front making Neben ride to pull her back, all together as they came round the corner at the bottom of the Cauberg, Van Der Breggen first, but out of the bend and the young Australian, Neylan put on the pressure to be jumped by Vos. 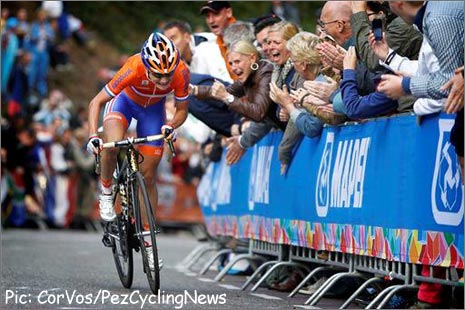 Vos simply rode away from them on the Cauberg with devastating force.

Vos was away, Neylan struggled after her as the others disappeared in the distance. Last kilometre and Vos had the World championships in her sights, Naylan was chasing with Longo Berghini further back

Marianne Vos crossed the line holding the Dutch flag aloft; Naylan was at 10 seconds and Longo Berghini at 18 Neben at 33 and Van Der Breggen at 55. The others were well back at 3 and 4 minutes. 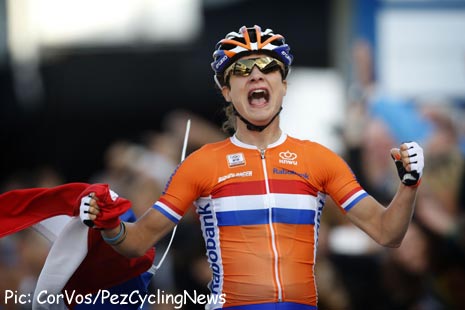 Marianne Vos showed why she was the main favourite before the start, especially in her home country.

Keep it PEZ for tomorrow’s Elite men’s race and what Ed has been up to down on roadside.