The inaugural Tour of Alberta proved to be a great success this past week with aggressive racing, a high quality field and a worthy winner in Garmin-Sharp’s young Aussie Rohan Dennis. While Peter Sagan opened and closed with stage wins, everything in between was full of surprises. 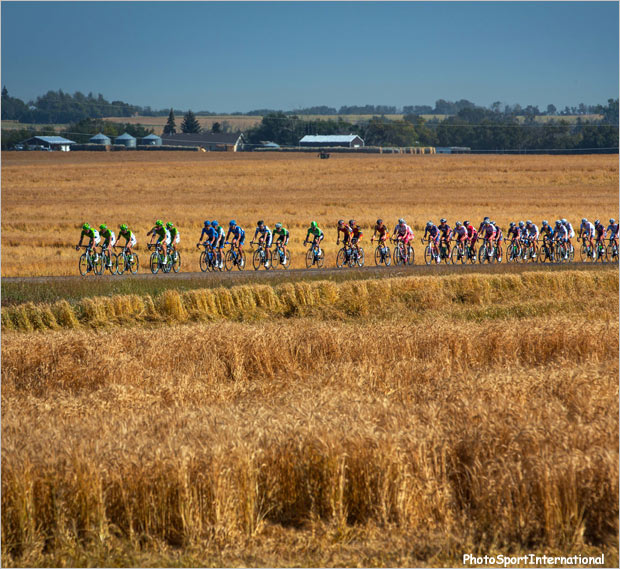 Stage 3: Strathmore – Drumheller
The first two road stages of the inaugural Tour of Alberta were run off at stunningly fast average speeds approaching 50kmh. Even so, these opening stages proved to be the calm before the storm as the race entered the lumpy, windswept plains of Drumheller on Friday. There had been hopeful predictions of impending crosswinds among the Tour’s hard men all week and on stage 3 they got their wish. Less than 10km into the stage the peloton was battered and split on the exposed course leading to constant accelerations and regroupings over the first hour of racing. 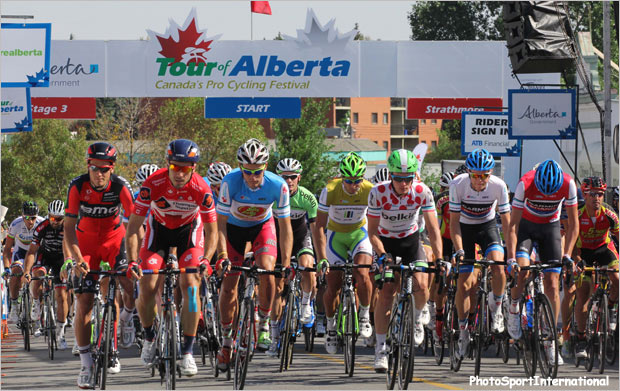 Francesco Mancebo of 5 Hour Energy finally launched a successful attack after 60km. Following several more kilometers of counter attacking and reshuffling the break had ballooned to 18 riders including Canadians Alex Cataford of Garneau Quebecor and Ryan Anderson of Optum p/b Kelly Benefits as well as top contenders RohanDennis (Garmin), Brent Bookwalter (BMC) and Damiano Caruso (Cannondale). Race leader Sagan missed the move and so had the entire Canadian National team. These teams led a brief chase but this effort was abandoned as legs and motivation waned and the break continued to gain time.

With over 12 minutes lead on the peloton, the infighting in the breakaway began. At 25km to go Gesink attacked and brought Bookwalter, Moriabato, Dennis and Patrick Gretsch of Argos-Shimano with him. These 5 survived ahead of the rest and after a fiercely aggressive final 5km, Dennis stormed in to take a narrow win ahead of Bookwalter and with that he claimed yellow jersey as race leader. Ryan Anderson led the chase group in for 7th place and took over the Best Canadian Jersey from Ryder Hesjedal. Peter Sagan and the rest of the race eventually rolled in almost 16 minutes back, leaving only a few men in contention for the GC win in Calgary.

The Canadian National Team’s Rob Britton described a difficult and frustrating day in the peloton:

“The last couple days have been hard on the team. Super aggressive racing! Sagan is by far the strongest guy here but everyone is riding against him. Yesterday’s stage was hell. Crosswind straight outta the gate for the whole day! We missed the move and tried to chase for a while but without much help and a super motivated front group bringing them was going to be a tall order. After the breakaway got 6 minutes we focused on energy conservation. We have hopes that things will open up a bit more going into the weekend when the courses look a little more conducive to a break in the first 20km not 100!” 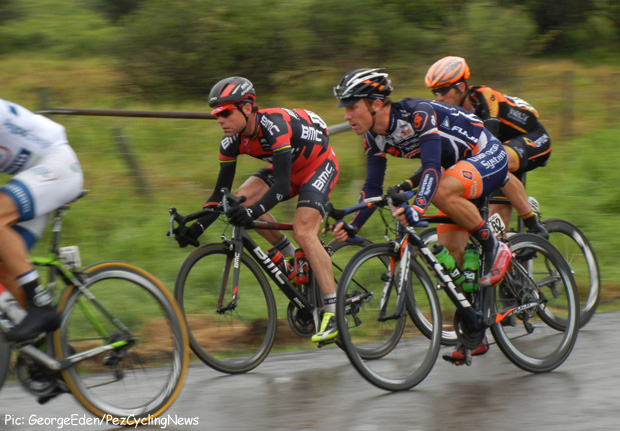 Cadel Evans significantly increased the star factor in the break on stage 4. 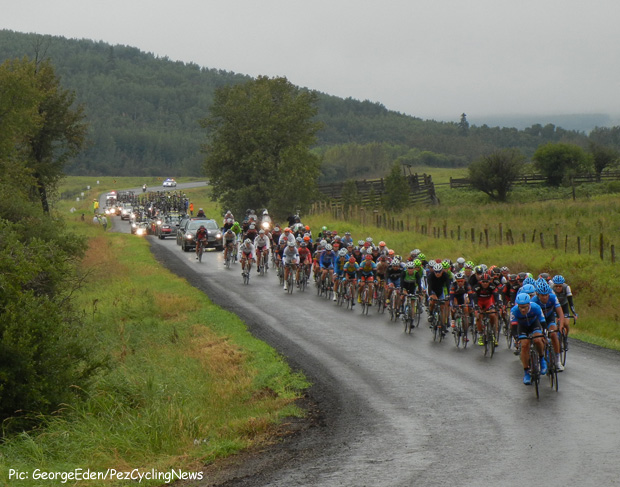 With the action occurring up front, Garmin kept a wet eye on proceedings back in the pack.

The first disruption in the break came at the KOM 82km in as Jelte-Slagter’s attack for the mountain points turned into a two up attack with Getschke. The rest of the break patiently stalked the duo until Duschesne attacked with 50km to go. Evans and Day joined the young Canadian and they quickly left the other escapees behind and joined the leading pair. 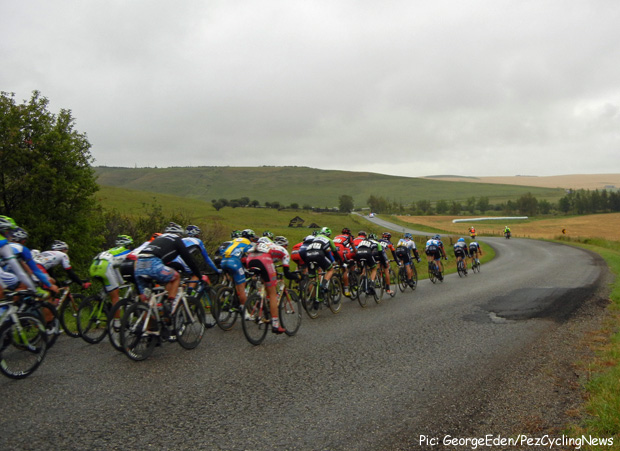 This final selection of 5 worked well together until Day made a promising move with 2km to go. Unfortunately for him, the road tilted upwards in the final 400m and stymied his effort. Getschke launched early to shoot past Day in the final 100m but the canny Cadel Evans saved his final punch and clawed back to a victory ahead of Getschke, Jelte-Slagter and Day respectively. Duschesne clawed his way to the finish to claim an impressive fifth place finish, the most aggressive rider jersey.

Duschesne’s stage 4 result was also the first top 10 of the week for the Canadian National Team who had been struggling to make an impression on the race. Duschesne’s teammate Rob Britton said:
“ After stage 3’s massive underperformance we came out swinging and really rode to the level that we are capable of…(it) was a great day for us and for Tony (Duschesne) in particular” 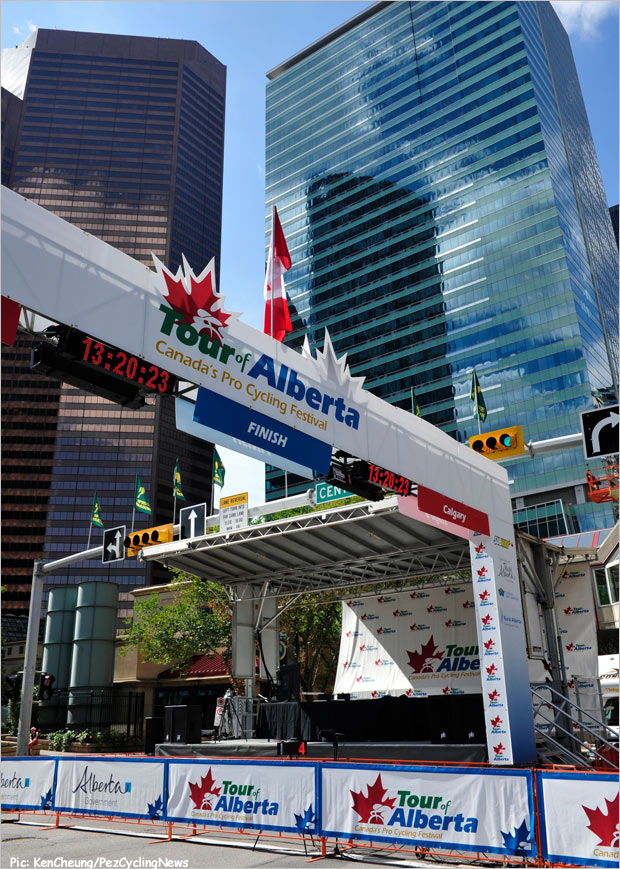 Stage 5: Okotos to Calgary
The Tour of Alberta’s final 129km stage consisted of a flat and fast run in to downtown Calgary where riders raced looped around the city four times on a technical 3.5 km circuit. If any stage was designed for a bunch gallop it was this one and it didn’t disappoint. 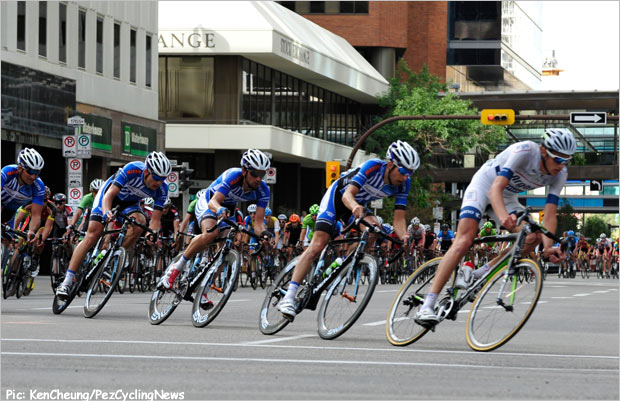 Nevertheless, the day began with flurries of attacks by riders fighting for a spot in the day’s doomed breakaway. After 32km a break of 8 riders slipped away but they were given only a minute’s advantage by the sprinter’s teams controlling the peloton. The day’s escapees included James Stemper (5 Hour Energy), Carter Jones (Bissel), Craig Lewis (Champion System), Chad Haga (Optum), Fummi Beppu (Orica-GreenEdge) and Adam Farabaugh (Garneau) as well as Canadians Nic Hamilton (Jelly Belly) and Kris Dahl (Smart Stop). 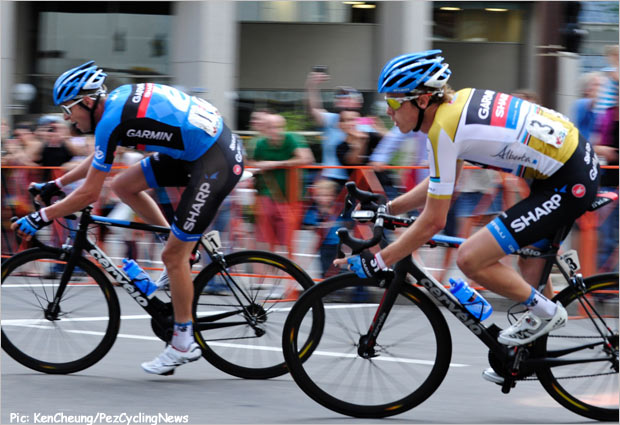 Ryder Hesjedal rarely left the front of the peloton in the final stage working for yellow jersey, Rohan Dennis.

On the way into his hometown of Calgary, 21 year old Kris Dahl grabbed some glory when he claimed the day’s only KOM ahead of his breakaway companions. However, by the time the group was greeted by the crowds on the finishing circuits the pack had them within sight. Despite a last minute dash from Farabaugh, Stemper and Beppu, it was “gruppo compacto” with 1 lap remaining. 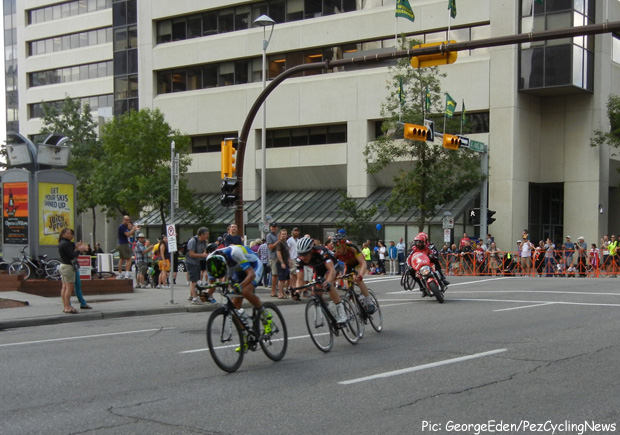 The criterium specialists of Team United Healthcare executed a textbook lead out for fast-man Robert Forster to give him the lead heading into the critical final corner. It was all for naught though as Sagan undid the squad’s hard work. Without pause, the Slovakian superstar dove for the apex inside of Forster and to take another commanding sprint victory. Yellow jersey wearer Rohan Dennis went unchallenged in the end and claimed the overall win in the inaugural Tour of Alberta. 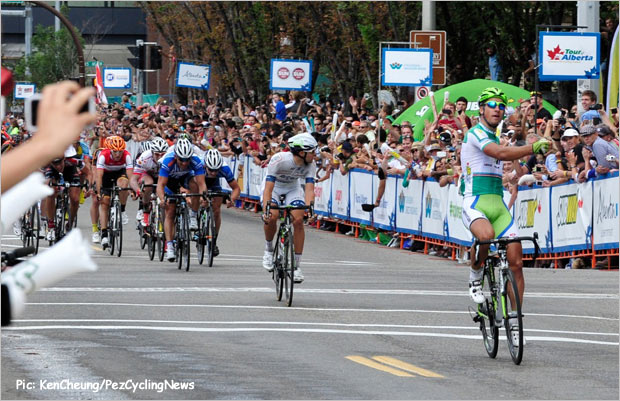 The Canadian National team finished the TOA with mixed emotions as they missed the breakaway and didn’t challenge in the sprint on stage 5. Rob Britton summarized the Tour’s final day:

“We weren’t lucky today and we missed (the break) that counted. That was that and from there we focused on the finish. All in all the Tour of Alberta was a great race to be a part of and I think the team learned a lot. I am really keen to come back next year and show what I can really do.” 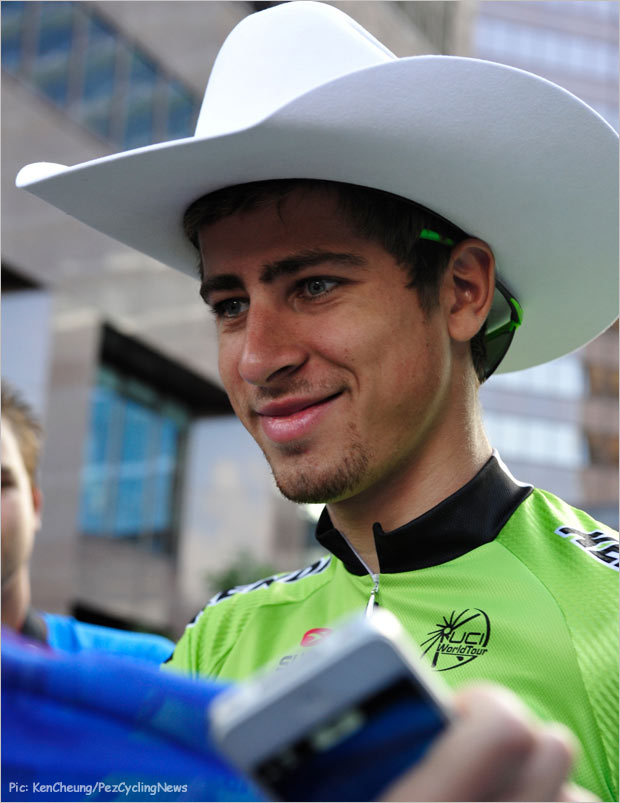 And that final statement might just contain the most important takeaway from Canada’s inaugural World Tour stage race. Canada’s aspiring riders now have the unique opportunity to test themselves against the world’s best on home soil. Hopefully the Tour of Alberta will continue to provide exciting, fan-friendly racing and inspire Canada’s best cycling talent for years to come. 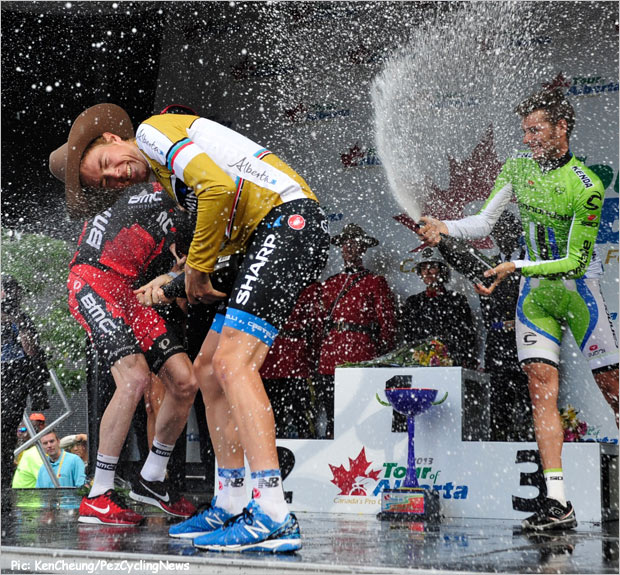