Race report: From his sickbed to the podium, Belkin’s Bauke Mollema executed the oft-tried but rarely successful last kilometer flyer to foil the sprinters in Burgos. The Dutchman jumped at the right time and his team-mate immediately behind left the door swinging in the breeze, just a big enough gap for Mollema to steam away for the win.

It was a thrilling end, again in this Vuelta, to another fascinating stage. The roads and gradients weren’t necessarily the problem, but the crosswinds were. Here’s how it all panned out …

Today is another semi-realistic shot for the sprinters, but their teams may not have the collective firepower to keep everything together. Michael Matthews, Max Richeze and the like might need a bit of help from the GC teams because …

… there’s a potentially nasty climb just ten kilometers from the finish, followed by a tortuous, twisting final few moments into Burgos. Up to then though, rolling, bumpy and a bit windy, but nothing too onerous as the race leaves Rioja and all that wine.

Everyone’s favorite unstoppable Aussie, Adam Hansen, is off the front today. Heading for a seventh consecutive Grand Tour finish – via a Giro stage win – the shoe-designing, software-writing Queenslander just gets on with it. He’s got another breakaway specialist for company – Fran Aramendia from Caja Rural. 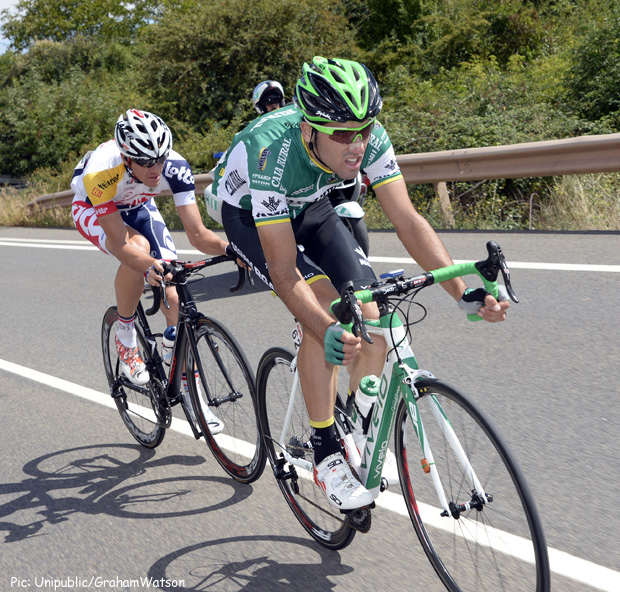 They’re eight minutes clear at about a quarter-distance and Lampre-Merida and Orica-GreenEdge decide they’d better start to shake themselves into action.

Aramendia and Hansen hurtle down towards Santa Ollala del Valle. Behind the two leaders, Nicolas Edet (Cofidis, mountains leader) and Daniele Ratto (Cannondale) have a right proper joust in the race to the summit of the third-category Alto de Pradilla.

It’s like two drunks squabbling unsteadily over a girl at a party only for someone else to invite her for a ‘drive’ before they notice. Nico Sijmens had already been the policeman and hoovered up the remaining points for his Cofidis mate behind Hansen and Aramendia. Ooops.

60 to go, and the lead is still over four minutes, but Movistar and Katusha have their game faces on, stringing out the field. The second categorised climb is the Alto de Valmala: Hansen takes the points from Aramendia. Sijmens jumps again but he’s a stepping stone for Edet who whips out of the peloton again to take the last mountains point of the day. He turns and gives Sijmens an acknowledging wave.

The peloton comes over at 2’ 42” with Lampre’s Diego Ulissi on the front. It’s beautiful northern Spanish countryside, the sun is beaming. A near-perfect day, but the wind is getting up ominously.

38 to go for Hansen and Aramendia as they hit Villasur de Herreros with just on two minutes in hand.

We turn inside 30 to go and suddenly gaps start to rip open in the main field. RadioShack-Trek with Fabian Cancellara smashing it are towing the favorites’ group at nearly 70 km/h. The peloton is shattered. It’s just bad, baaaaad news for the breakaway duo as Katusha, Saxo-Tinkoff and Astana turn the screw.

23kms left, the gap is 23 seconds as Hansen looks back. The camera pans back to the third group on the road and Pozzovivo is stuck in it, possibly losing his fifth place overall. Thibaut Pinot is also caught out, as have the Argos-Shimano sprinters who set their guys to work. 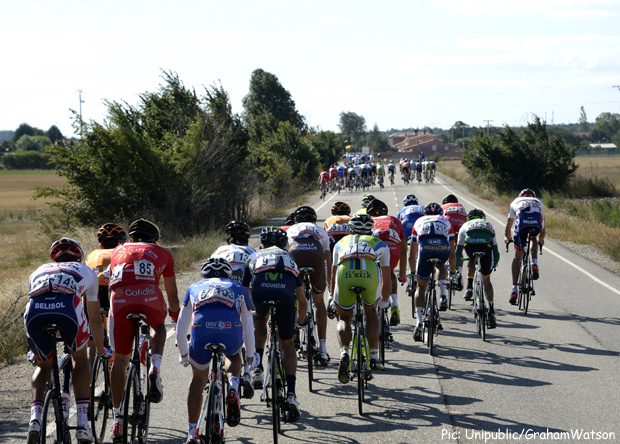 21 clicks from home, Aramendia reaches across his left hand. Hansen shakes it graciously; it was worth the try and they both contributed but the field had other plans.

Tossatto and Nicki Sorensen are drilling it for Nicolas Roche as the big favorites are solidifying their positions. The front group enters Burgos now with 13kms left, and the Vuelta road book has no fewer than 13 warning signs for the closing part of the stage. Sharp turns and hairpins in waiting for the unwary.

Nine kilometers left: Astana and Katusha motor up the climb to the castle: the lead group is down to about thirty guys now. A moment’s slowing and Lampre’s Diego Ulissi atatcks up the right-hand side of the road.

Ulissi is doing his best but he’s not opening the gap on a really narrow, technical descent. This is a worry for the overall hopefuls. If someone gets a corner slightly wrong it could be carnage. Egoi Martinez (Euskaltel) gets over to Ulissi.

Van Summeren (Garmin-Sharp) is really hammering on the front and there are gaps between wheels behind him. Ulissi and Martinez are caught and Vanotti (Astana) is solo with 3.5 to go.

Two to go, and the front group is together. They have over a minute on the Pozzovivo group. Red kite, Sky with Zandio lead through for Boasson Hagen. Then Bauke Mollema goes for a long one and David Tanner, his Belkin team-mate, lets teh gap go.

Mollema desperately slices through the wind as the sprint unwinds behind him. Boasson Hagen, Richeze, Farrar all heads down and giving it everything, but …

… Mollema hangs on and nicks a prefectly-timed stage win. 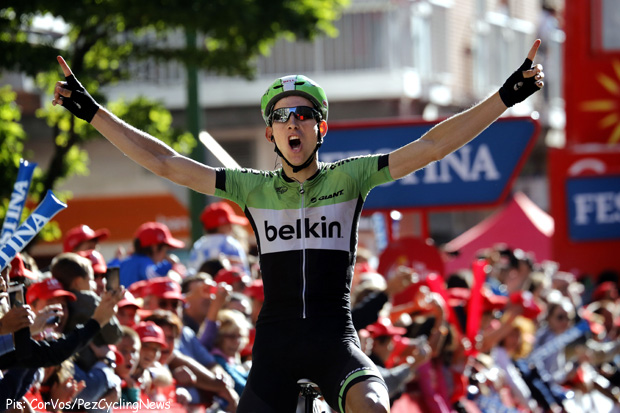 Pozzovivo’s group comes in a minute-and-a-half down. Ouch.

There was only one significant top five change as Roche moves up and Pozzovivo moves down, but there were no problems for Nibali, Horner, Valverde or Rodriguez. The big battles are still to come.

Medium mountains tomorrow, and the possibilities for further General Classification ambushes increase. Keep it Pez for all the latest Vuelta news in Eurotrash and our race reports.

OPQS to Tour of Britain

Belkin in Canadian classics to win