Race report: The pocket rocket Joaquim Rodriguez is the man on the Alto del Naranco taking the stage with a blistering last kilometer surge. It’s his first stage of this year’s Vuelta, but there’s even more drama just behind him as Chris Horner overturns his three-second deficit to grab the race lead from Vincenzo Nibali.

The veteran American, 42 years young, has just enough in the tank to edge Nibali out of the top spot with just two days to go. We thought the Giro was the best Grand Tour, but the Vuelta is knocking spots off it with every stage. We just don’t know how this one’s going to turn out.

And it had all started so simply. Here’s the story of the day …

Hour one of today’s stage is run off at a mind-bending 50km/h, and it’s not so much an escape group as a mass exodus from the safety of the peloton after only two kilometers. It’s the usual suspects: mountains classification hopefuls Edet (Cofidis, who started the move) and Ratto (Cannondale); inveterate attackers like Urtasun (Euskaltel) and Arroyo (Caja Rural); refuge-seeking sprinters such as Eddy Boasson Hagen (Sky) and Orica-GreenEdge’s Leigh Howard; and top twenty battlers like BMC’s Dominik Nerz.

It’s nip-and-tuck for a while as the peloton doesn’t want them to leave, like a protective family waving its teenage children off on a parent-free gap year. No, please … don’t leave us! Inside 100kms to go and the lead is tickling 2’30” without ever getting more than that. Katusha are keeping the peloton clipping along. Boasson Hagen and Argos-Shimano’s Georg Priedler have a little dig and go clear. This is actually not too bad a day for Eddy Boss – hills that aren’t massive and the chance of a small group finish.

The Austro-Norwegian empire builders do a good job together and strip out close on two minutes on the remains of the break as they grind up an unclassified climb approaching 65kms to race. 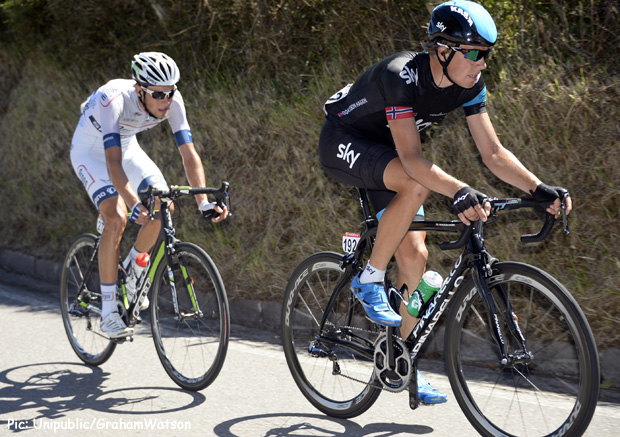 Eddy Boss and George continue to work really well together and with 50kms left they’ve got almost two minutes on their chasers and over three on the main field. Onto the third-category Alto de San Emiliano and Boasson Hagen takes the point from Priedler; Edet has picked up the remaining score. The gaps remain the same.

22kms left and the chasers have been absorbed: Boasson Hagen and Priedler keep on keeping on but it’s looking fairly hopeless for their long-term chances today. Nibali shows himself on the descent, leading the peloton as up front a new lead group is forming. Jose Herrada (Movistar), Gorka Verdugo (Euskaltel) and Juan Antonio Flecha (Vacansoleil-DCM) have caught Eddy Boss and Priedler.

The Austrian then jumps alone to take the points on the next third-category Alto de la Manzaneda. Serge Pauwels (OPQS) was over second and then Flecha.

The front of the race is changing as the break reforms and falls apart and reforms. The peloton is speeding up all the time. Jose Joao Mendes (NetApp-Endura) jumps clear now, but he’s pursued by Pauwels and Jose Herrada. They can see him ahead; the Portugese rider isn’t looking back.

3kms left, and Mendes is dancing out of the saddle, swaying as he hits 11% gradient. SaxoBank-Tinkoff Bank take over at the front of the peloton, as Horner continues to shadow Nibali. It’s Rafal Majka for Saxo-Tinkoff, turning on a furious pace.

The speed at the head of the main favorites’ bunch is doing for Mendes; his lead is evaporating. Herrada is chasing, but Thibaut Pinot is dropped from the head group.
The peloton has melted from about 45 riders to 25 to 15.

1.1kms to go and Roche (SaxoBank- Tinkoff Bank) attacks, and the Irishman flies past Mendes. Horner gets up to him, then Roche goes again. Huge counter-attack from Purito Rodriguez who rockets clear. Scarponi counters, but Purito is long gone. Perfectly timed attack. Sammy Sanchez chases, but … behind Horner ups the tempo and Nibali is in trouble.

Rodriguez is gone and the stage is his, celebrated with a single fist raised to the sky. It’s Ulissi (Lampre) over in second with Dani Moreno third and Sammy Sanchez not able to deliver the home win for his Asturian fans. 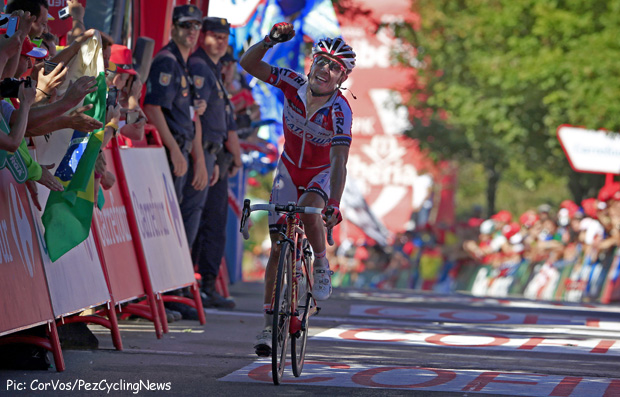 Then Horner grinds to the line … and there’s a gap. The clock ticks so quickly for Nibali, so slowly for the American. It’s a six second advantage for Horner as Nibali all but tumbles across the line. 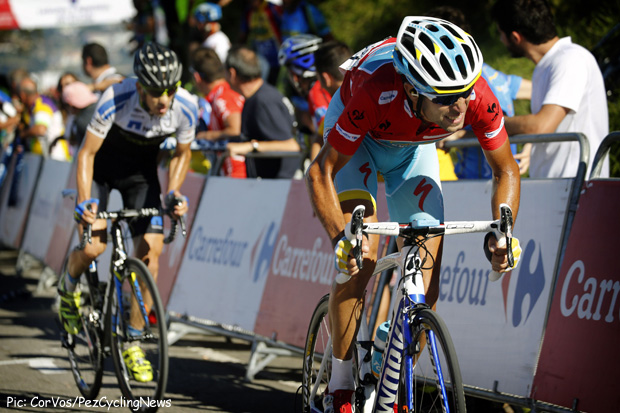 The race lead is the American’s as we head into the penultimate stage to the Angliru tomorrow.

Incredible stuff as the Vuelta just continues to deliver twists and turns with every passing day. Looks like Abraham Olano did a fine job with the course design before his services were dispensed with.

Keep it Pez for what should be another eyeball-popping day tomorrow.