After his charges had some success in the first half of the race in Amsterdam Ed Hood was hoping for more of the same in the back half but instead most of the spoils went to Paris-Roubaix champion, Niki Terpstra. Here’s Ed’s inside look at the all the goings on from the six day in Amsterdam from the final nights. 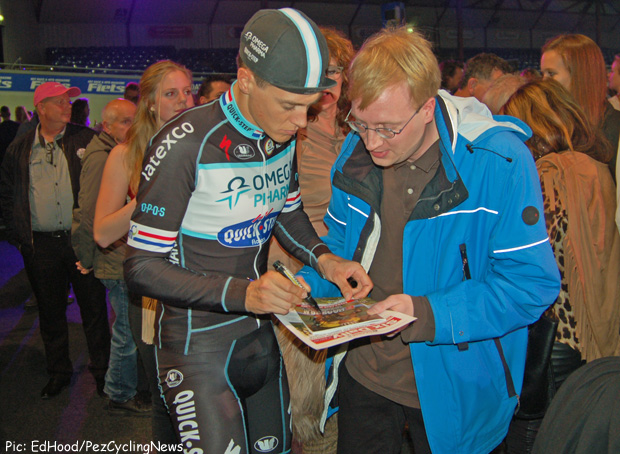 At this point it would be easy to rattle out hyperbole about how strong Niki Terpstra was and what a magnificent win it was for him and Yoeri Havik. We’ll leave the ‘but’ until later and roll back to night five:

The first chase wasn’t on fire but there was plenty of heat after it as the lesser teams squabbled about who should and shouldn’t be chasing whom – this lead to us having house guests. 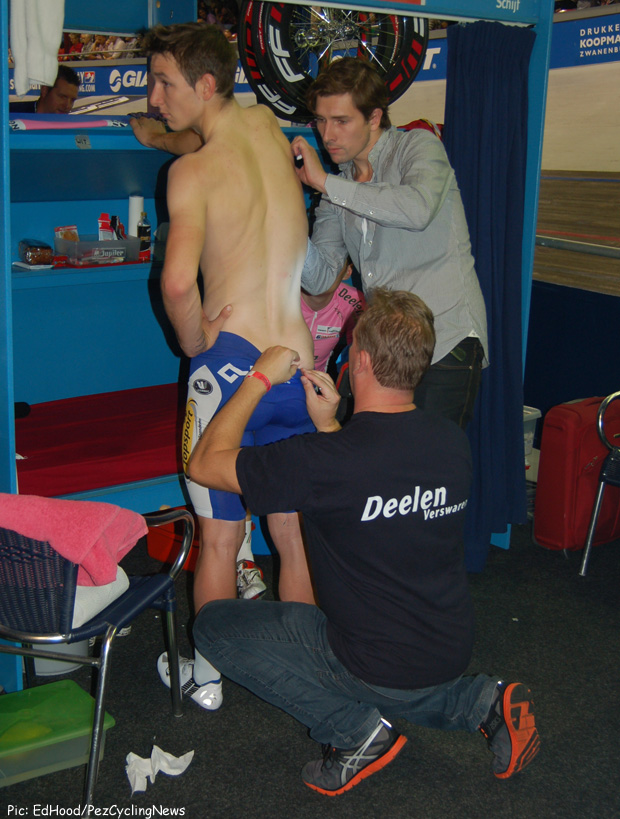 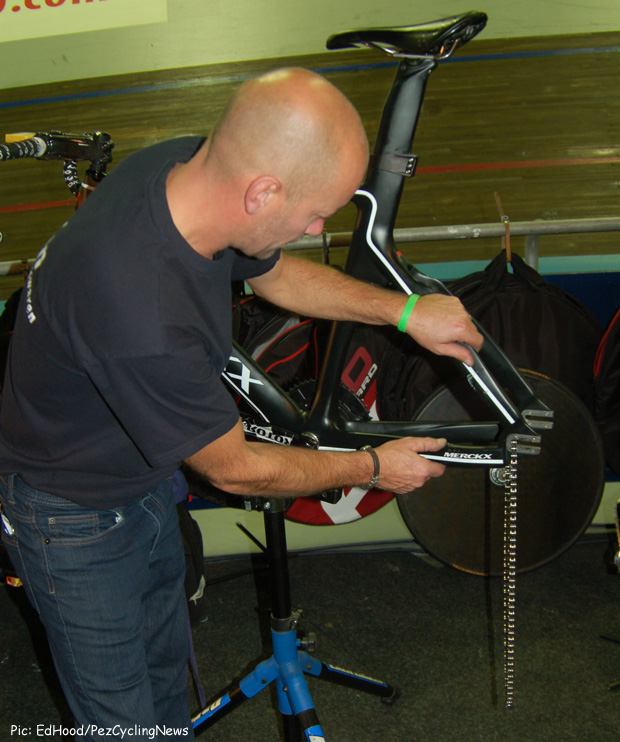 The Blues Brothers, ‘Everybody Needs Somebody’ heralded the start of the team devil during the course of which Jasper De Buyst hit the deck; the race doctor administered first aid to Jasper whilst Dirk did the same to the bike.

It was a hectic old night to be a runner; my soigneur was feeling a little under the weather so I was a busy boy but I got the odd opportunity to wander and take a few snaps. 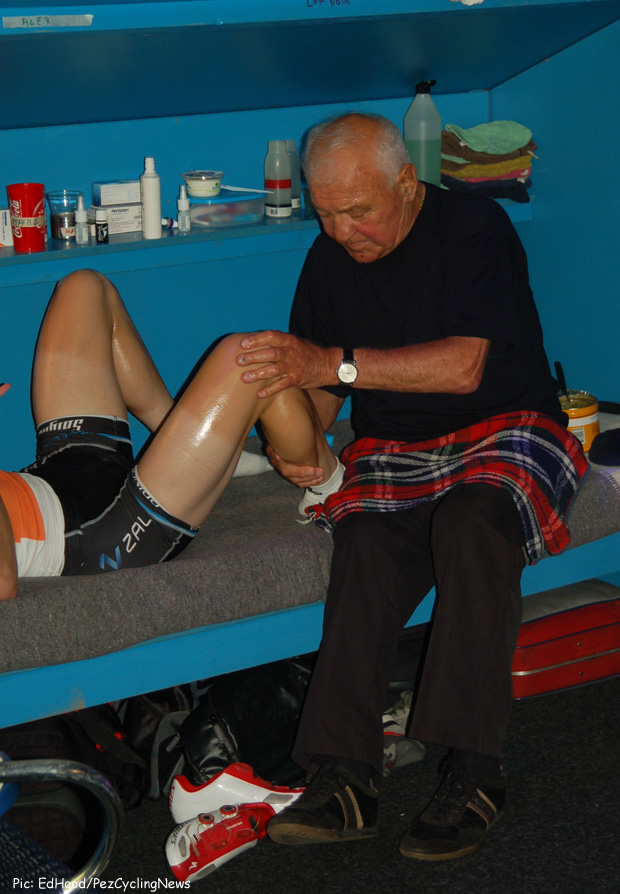 Guillaume Michels is 80 years-old now but still rubbing those legs – those same hands were the ones which rubbed life back into Eddy Merckx’s pain wracked legs and body after the Molteni man broke the world hour record in Mexico City in 1972. No laps of honour, ‘iPod playlists’ or obscenities on the top tube back then. 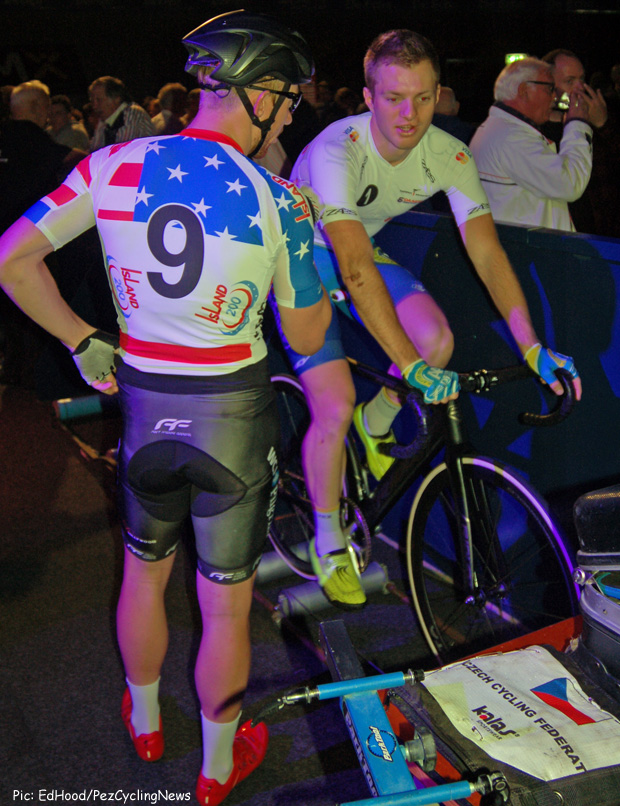 Meanwhile Daniel chats to Yoeri Havik; ‘any chance of lightening up in those chases dude?’ – only joking, Daniel! 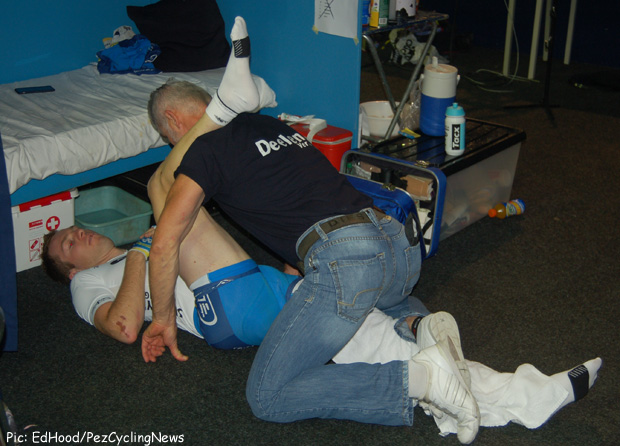 But Yoeri has to take a bit of discomfort too as his physio works his thighs. 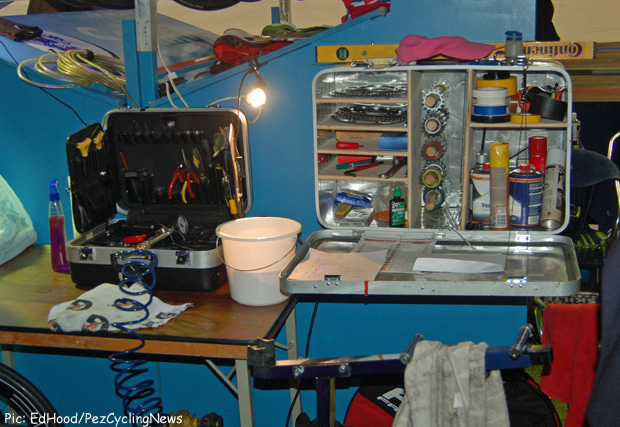 And if you want a real mechanic get yourself along to Dirk Dekeyser or one of the German guys, they cost but they’re pros – check out those tool kits. 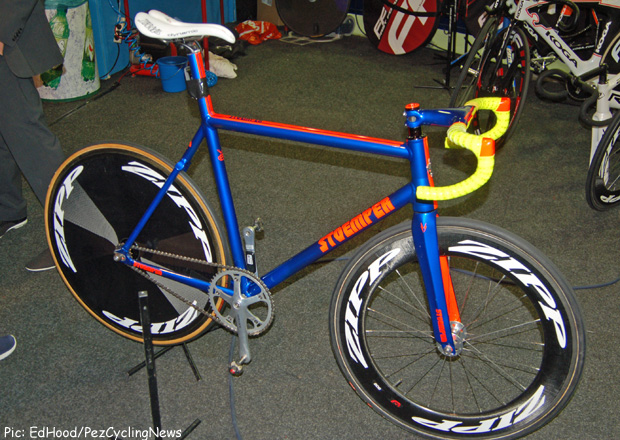 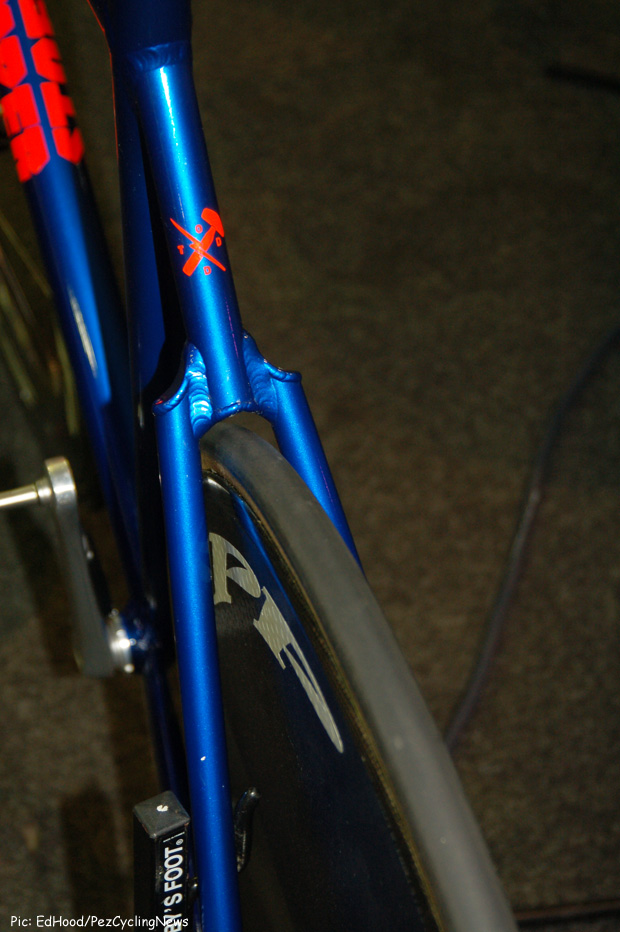 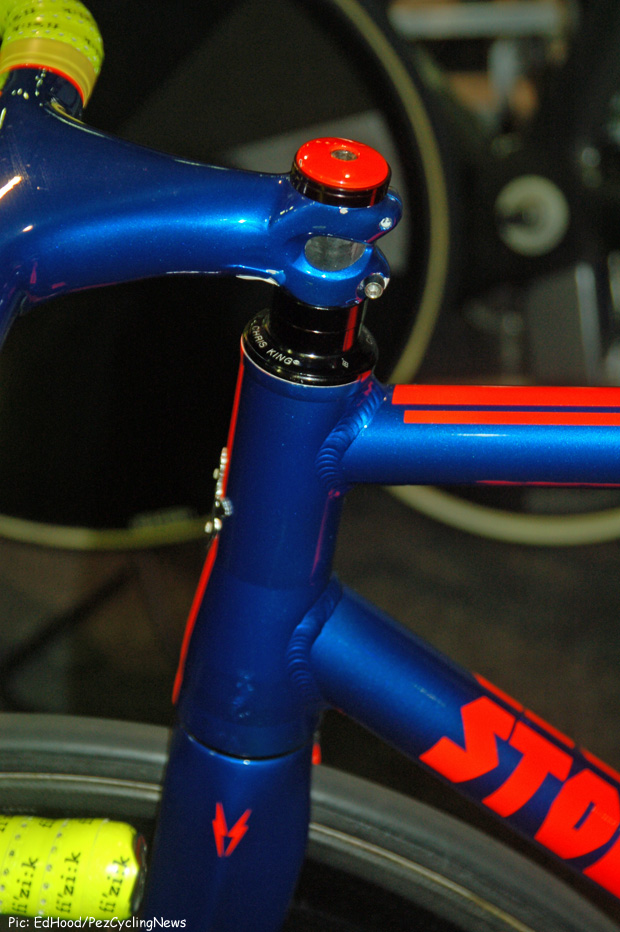 And on the subject of things mechanical and in a world where carbon is king, our boy Guy rides aloominum, complete with 1.125” to 1.5” head, neat seat stay detail – and LOUD colour scheme. 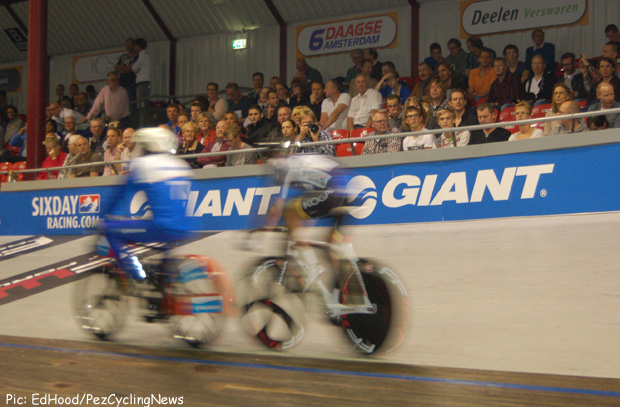 Derny 1 and Terpstra brings the house down as he goes for, and takes a lap; different from the usual ‘nail biter’ finish, pure theatre and the decent crowd love it. If you work on six days you stop watching Derny races after maybe your second race; unless it’s one like last night where your boys are winning and it’s not the usual ‘coming over the top’ finale – yawn!

Keirin 1 but no flowers, tonight. 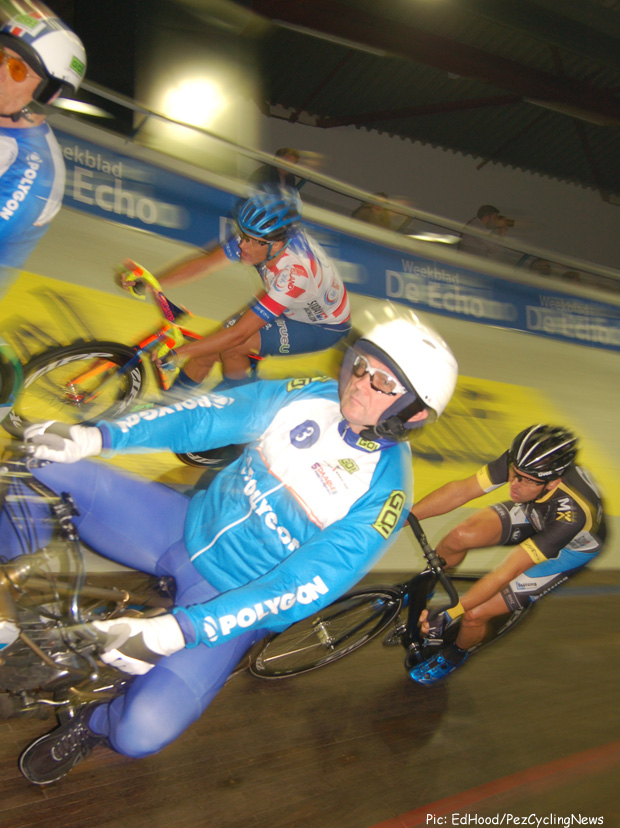 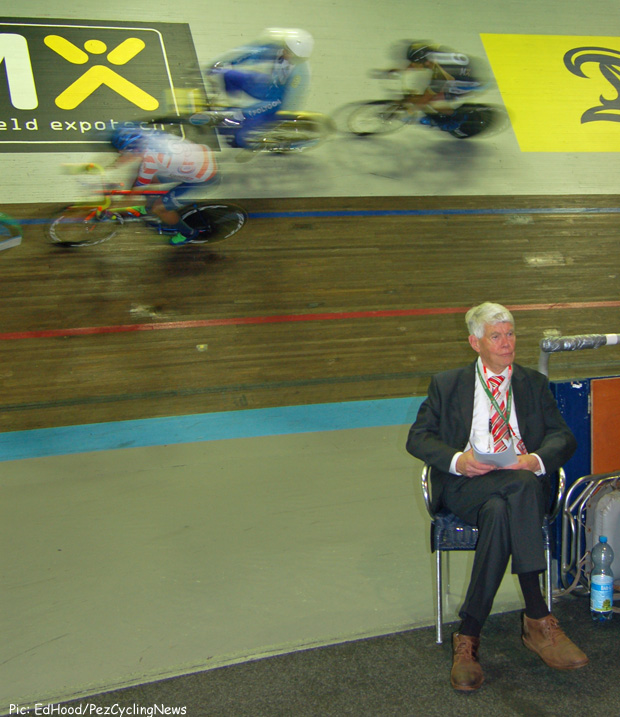 Derny 2 and Guy is up as Bruno Walrave sits beside the track oblivious to the little bikes whizzing past – it gets like that once you’ve paced 15 world champions behind the big motors.

Keirin 2 and Georgio Moroder’s ‘The Chase’ from the movie Midnight Express provides an excellent sound track. Then it’s Kiss, ‘I Was Made For Lovin’ You’ – that’s Iljo’s theme tune at the Gent Six and always makes me smile. For start of the big chase we go real retro, two from ‘65 – Sam The Sham And The Pharaohs, ‘Wooly Bully’ then The Stones, ‘Satisfaction,’ – nice! 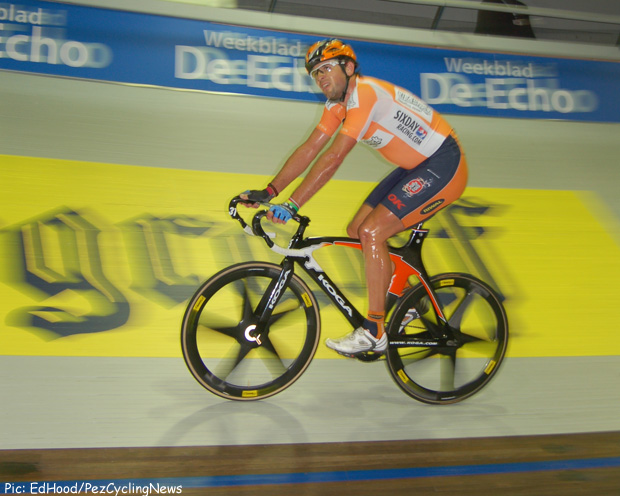 I asked Daniel what the pain ratings were for ‘The Bigs’ – Terpstra is numero uno on ‘savage;’ De Buyst and Lampater rate ‘brutal’ with Rasmussen, Havik, Hester and Stopler all pretty much on a ‘grim’ rating. On the one hand it’s easy to stand beside and say; ‘it’s not how I remember the chases at the London Six Day in ‘73’ and there are long ‘recovery’ spells where only the little teams go for laps – but when it’s ‘on’ it’s really ‘on’ and Terpstra, Lampater and De Buyst in full flight are damn scary to behold.

Guy didn’t have the best of nights in the last chase. 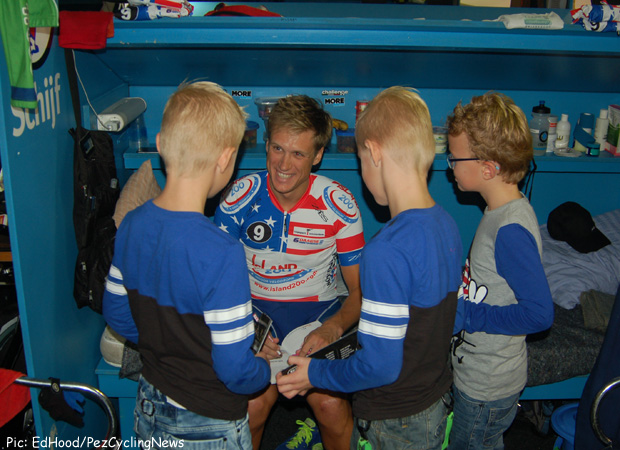 But a smile is rarely far from the man’s face, no matter what . . .

And here comes the night six ‘BUT.’ 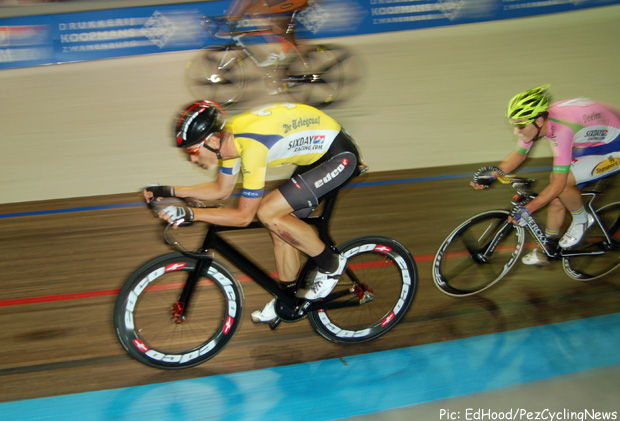 The finale was an anti-climax with Terpstra/Havik going into it on the zero lap – De Buyst/Ligthart and Lampater/Stopler at one lap – and coming out in exactly the same order with no serious threat to their lead. As a finale, it was, to use the words of my fellow PEZ man Martin Williamson, ‘a damp squib.’

I may be wrong but it looked to me as if Terpstra was frightened that if he lost the lap to make for a ‘grandstand’ last minute winning lap gain – which is how a Six should finish – then De Buyst may try to ‘flick’ him and fight tooth and nail with Ligthart to keep Terpstra/Havik at bay. Part of the problem was that there’s no race director – a role usually adopted by Patrick Sercu who no one messes with or contradicts. But like all of the rest of us, Mr. Sercu wants paid for his endeavours – but more about money in a moment.

There’s also the aspect that Leif Lampater – nice guy that he is – has never fully embraced the role of ‘Capo.’ If Bruno Risi said; ‘the finale is like this!’ then rest assured, that’s how it was. 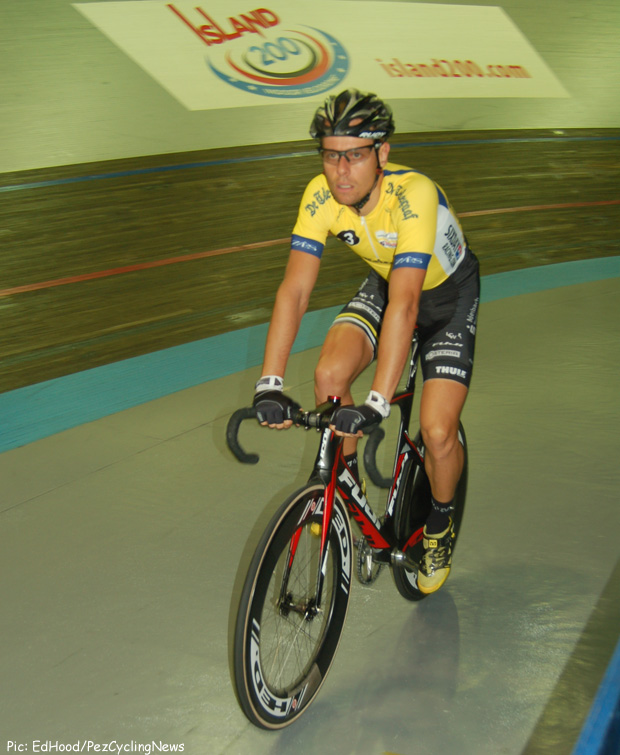 Leif is now the only full time ‘six day man’ on the circuit – not shackled to a big team, getting in shape in German criteriums and minor races then riding all of the six days. After a few ‘flat’ years he found himself last year, enjoying a great winter and this year at Amsterdam was a fearsome sight when in full flight. But as one rider said to me; ‘Leif doesn’t tell the lesser riders how it should be, it doesn’t concern him . . .

In the days of Risi the be-mulleted Suisse would constantly be round the cabins offering advice – and rebukes, if needs be – to all the teams, not just those bound for the podium. And going back to that which makes the world go round . . .

The protocol on a Six is that the organiser pays the riders, cash money on the afternoon of the last day – at this stage happiness reigns for an hour or two. The reason it’s cash is that the rider has to pay his mechanic and soigneur, who in turn may have helpers and runners to ‘weigh in;’ sometimes the organiser pays by cheque to the general disappointment of all.

But in Amsterdam, to quote that old Doctor Feelgood number, there was, ‘No Mo Do, Jakamo.’ There were similar problems in the Amsterdam and Rotterdam six days last year with Robert Bartko having to involve his lawyer to get paid. Assurances were given that this year would be different – but it wasn’t and there were a lot of long faces and short tempers around on Saturday afternoon. Except for Jasper De Buyst, he explained things simply in the ‘Belgian way’ to the race management; “pay me now or I go home!”

But as Kris, our soigneur told me; “it’s the first time in 40 years I’ve left a six day, unpaid.” 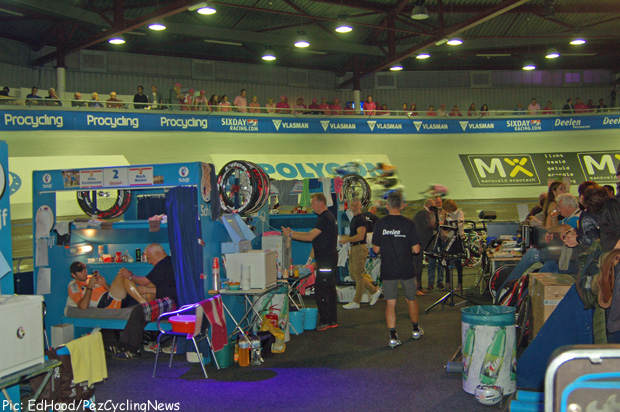 Now that’s all off my chest, let’s run through the evening’s events. The opening 100 lap chase kicked off to George Baker and ‘Little Green Bag’ – quirky. It was a brisk affair with the four top teams rampant – I kinda liked the race ‘speaker’ in a ‘so bad he’s good’ sort of way; “Oooooh ! Hoh ! Hoh ! Hoh !” and “Come on Niki ! Come on ! Come on !” And call me a moron but I never get tired of Right Said Fred’s, ‘Stand Up For The Champions’ tune which they play for race winners. 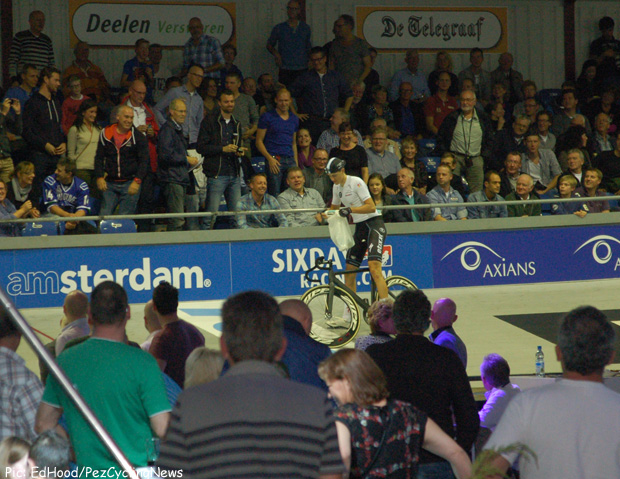 Terpstra/Havik took the devil with Niki spicing his lap of honour by riding around with a bag of QuickStep bidons and throwing them into the crowd, one by one. 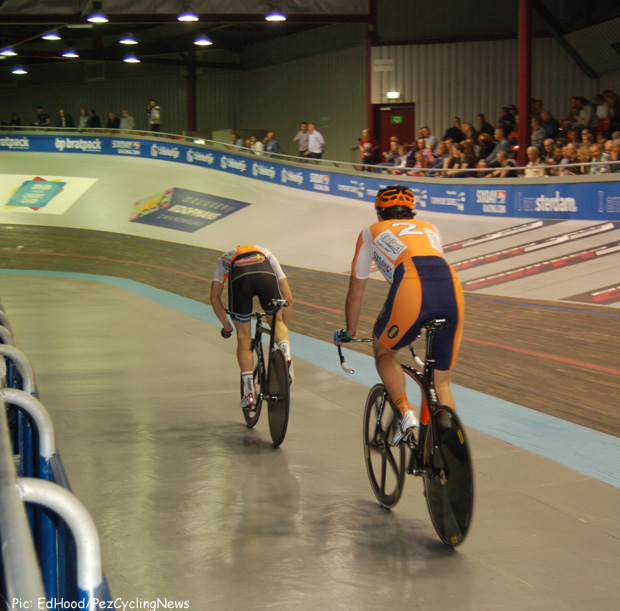 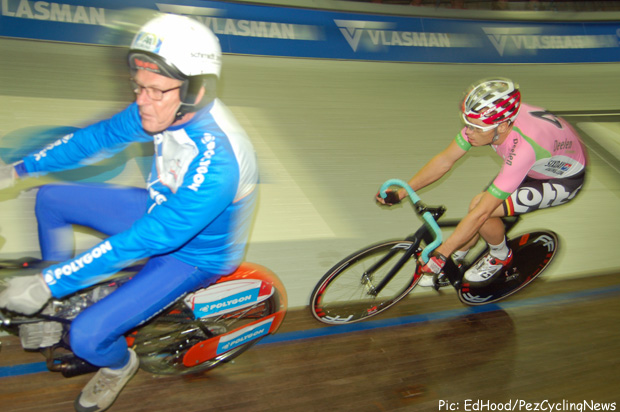 The Dernys and Keirin came and went in a 70 kph blur of noise and then, as Europe’s ‘Final Countdown’ blared it was time for those final 200 laps. 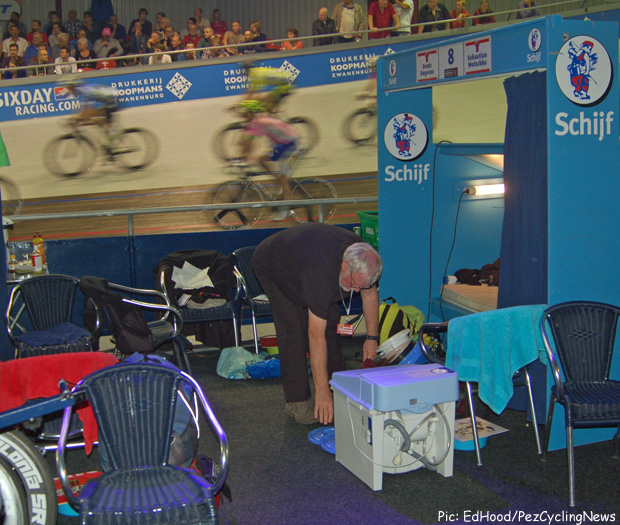 I didn’t see much of the first 100 laps; it’s a runner’s lot to hump the bags down to the cabin at this point. Apart from a crash and some decent tunes – ‘Livin’ On a Prayer’ for instance – the second 100 laps were pretty ‘flat’ with the minor teams clicking in to ‘club run mode’ towards the end. As one rider said; ‘what was the point in killing ourselves ?’

Terpstra/Havik took the honours and runner-up Jasper De Buyst had time for a quick word to PEZ as he packed his bag. 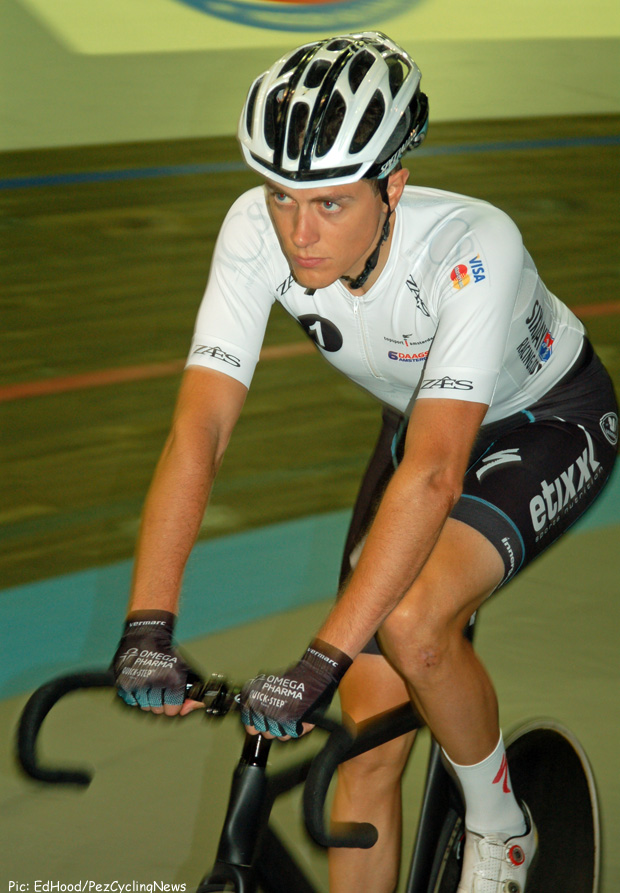 “Terpstra and Havik went to 300 points in the last race before the final and that gave them a bonus lap. We had a better points score but I hadn’t expected them to get to 300 so I was surprised – it meant we went a lap down and had to change our strategy from defence to attack.”

I mentioned to Jasper that he’d improved as the race went on;

“The first three days I was suffering – I had a hamstring problem but it’s eased off as the race went on. I was a bit tired from a long road season so took 10 days off before this race and didn’t ride the European Track Championships – I didn’t want to travel all the way to Guadeloupe and back.”

And what about Gent ?

“I haven’t signed my contract yet but hope to be riding with Kenny de Ketele.”

“Of course! I won last year and I can win this year!”

Kenny/Jasper v. Iljo/Cav with Patrick Sercu as race director – that should see a proper finale.

And there’s still time for another cappuccino before my flight . . . .

See you in Gent ?