Inside The Amsterdam Six

Working as a runner for the stars at the Amsterdam Six Day race our journalist Ed Hood is once again embedded deep inside the race. Here’s his story from the first half of the race at the velodrome in Amsterdam as we pick up the action on Day 3.

Apart from the fact that a large Dutch lady had her elbow in my ribs for the entire flight and the bus to the track stopped for only a nano second and as I bent down to pick up my bag the Number 69 roared into the cool Schipol night like a dragster, the trip was an easy one. 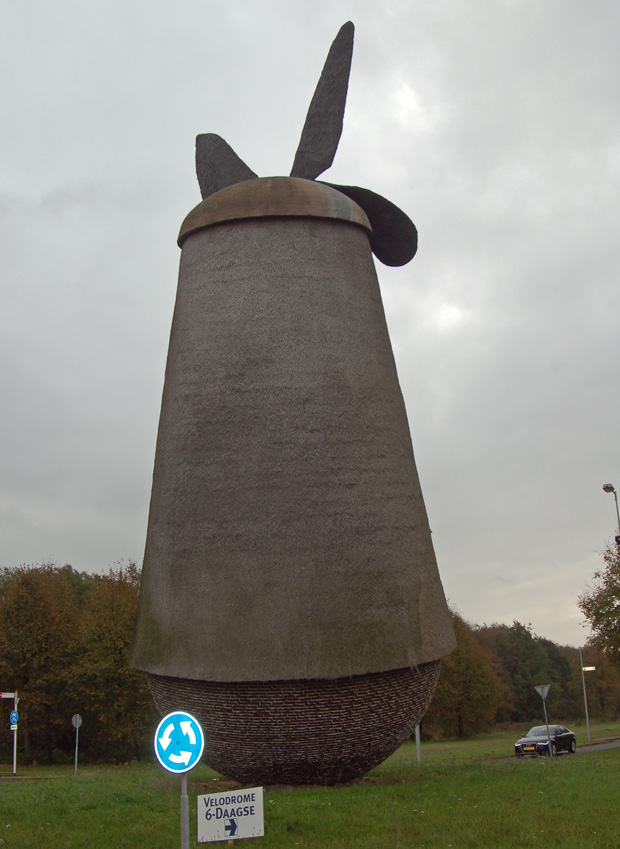 The taxi driver was cool though, dropping me off right at the track entrance; just past ‘the rabbit’ – that’s what everyone calls it but maybe it’s a stylised windmill? Wednesday night was my first night on the race but the third session of the race; the second night ended prematurely with a horror crash in the Derny race.

Former top ‘stayer’ – as they call the guys who ride behind the big motors are called – and recent six day star Danny Stam’s dad, Cees Stam was piloting one of the Dernys and is thought to have had a heart attack. He touched the wheel of another Derny and both of the little motor bikes went down, along with four riders. Mr. Stam is in a ‘serious but stable’ condition in hospital where the medical staff have placed him in an induced coma.

We wish him a full and speedy recovery. 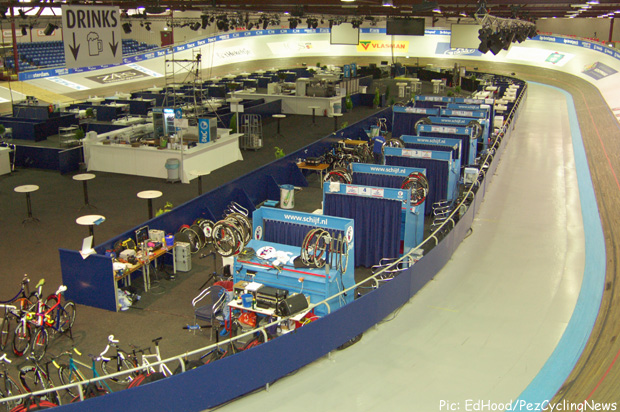 The 200 metre track here is nice; no frills but it has all the essentials – it sits in a low roofed industrial unit and has a good intimate vibe. 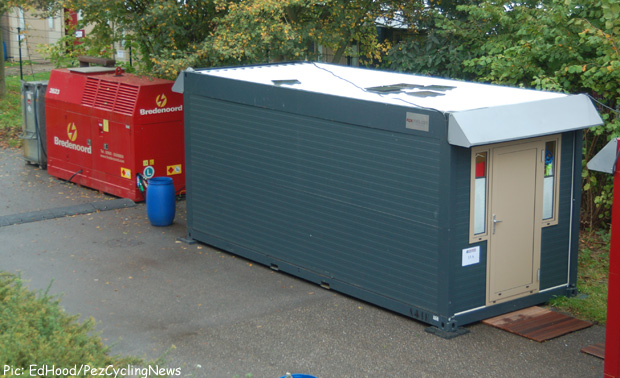 Their main cabins are industrial units out on the perimeter road so it ain’t glam but inside, track side there’s plenty of space for us. 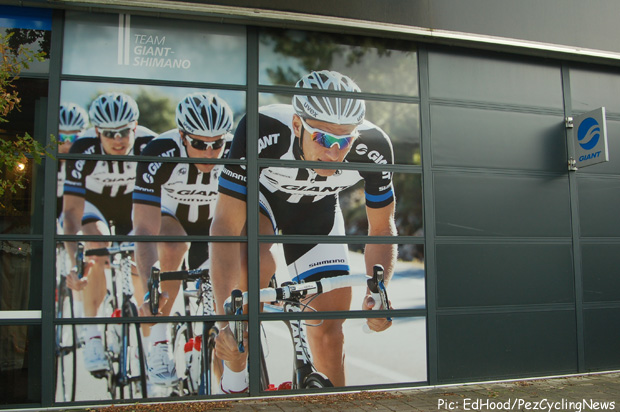 The velodrome is at the heart of a neat complex which includes a Giant superstore, closed road circuit and parkland where cyclocross regularly takes place.

The Amsterdam six was first held in 1932 and lasted until 1936 disappearing again until 1966 when six day legend Peter Post paired with Fritz Pfenninger. In that incarnation the race lasted until 1969 when Post won again with motor pace star Romain De Loof. It was 2001 before the race reappeared with Aussie stars Matt Gilmore & Scott McGrory winning; since then the race hasn’t missed a year with big names Martinello & Villa, Slippens & Stam, Risi & Betschart, Keiss & Bartko all on the roll of honour.

The field this year isn’t amazing but there are some good names; Paris-Roubaix winner and proficient six day man, home boy Niki Terpstra is the biggest name and rides in the number one tricot. 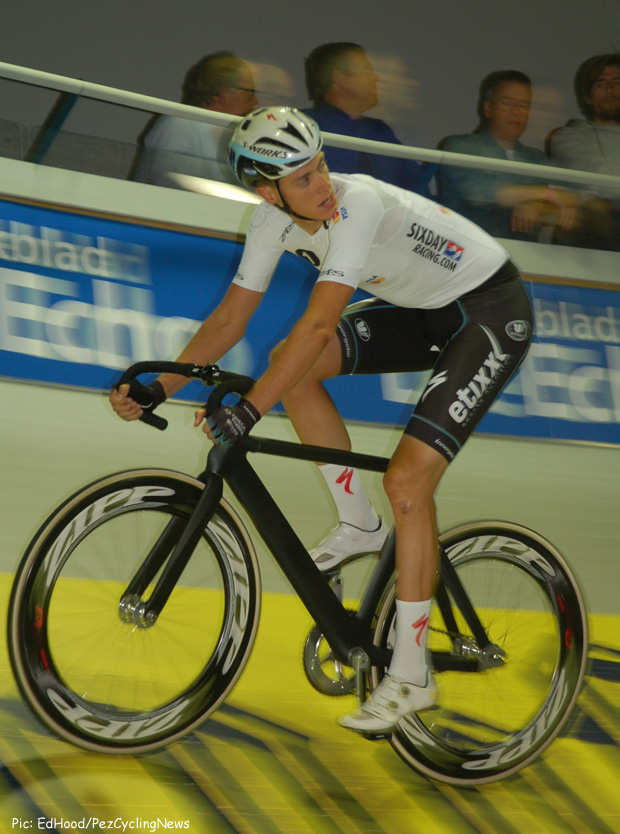 As our man, Guy East says; ‘when Niki goes on the front, the speed goes up 5 kph!’

Terpstra rides with consistent Dutchman, Yoeri Havik. The number two jersey is filled by the strong Danish duo of Alex Rasmussen and Marc Hester. Rasmussen was world madison champion with Michael Morkov back in 2009 and that pairing has won in Grenoble, Gent, Berlin and Copenhagen. Hester has won in Copenhagen with Iljo Keisse and has ridden a huge number of sixes despite only being 29 years old. 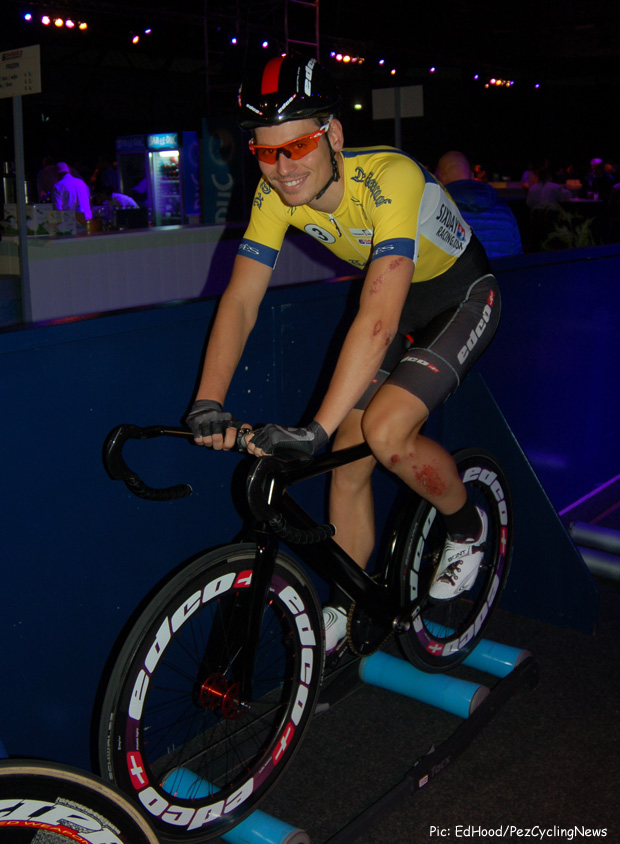 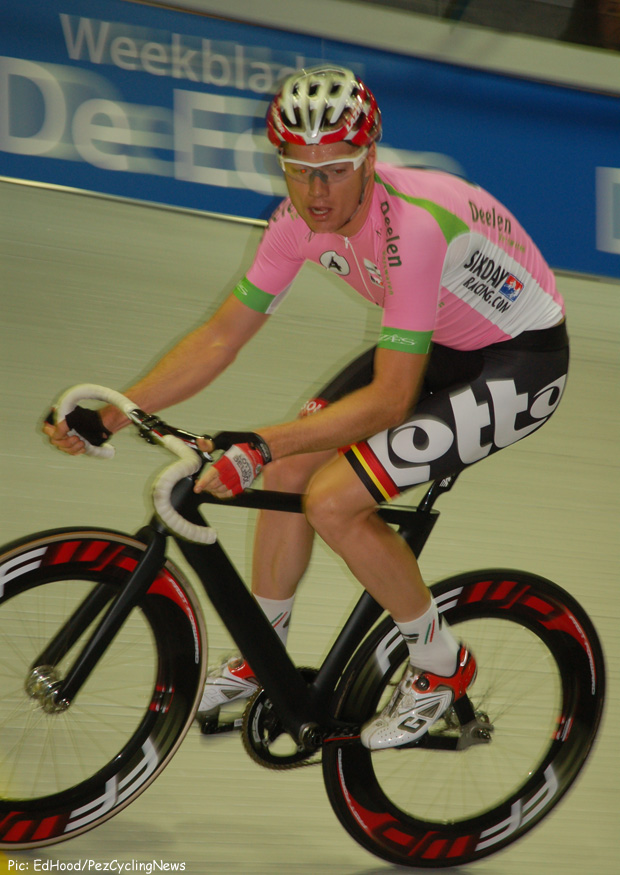 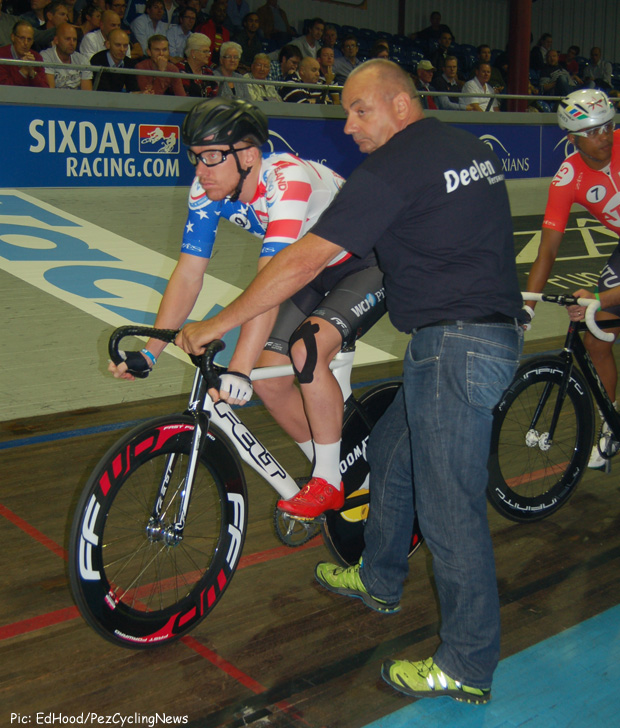 We have Americans Guy East and Daniel Holloway, the latter having burned up the US crit circuit this year with 21 wins – but he only got the call to arms for Amsterdam late in the day so when Niki turns on the overdrive, it hurts. Guy is based out of Mexico these days and maybe hasn’t had the quantity or quality of racing one really needs to joust with the Terpstras of this world. 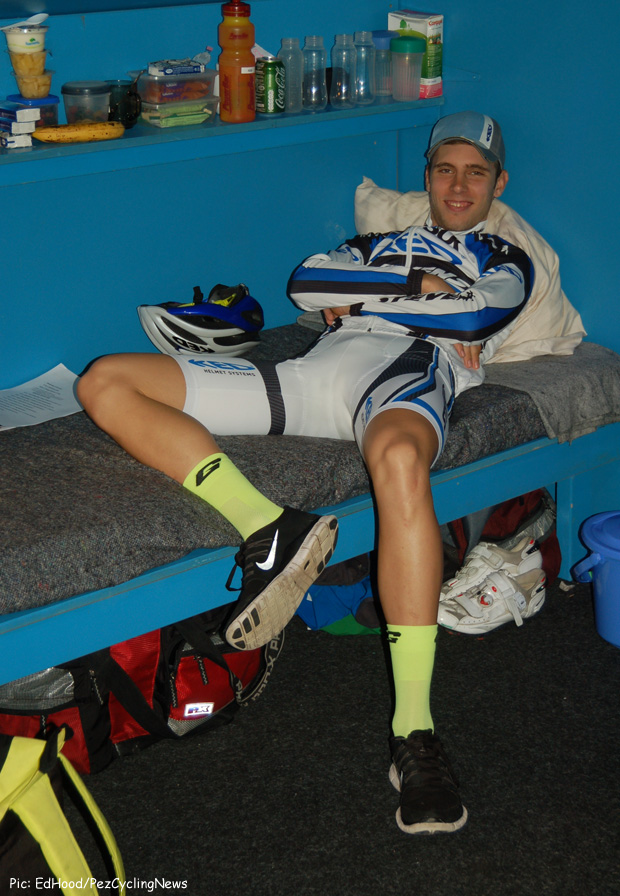 We also have German Sebastian Wotschke who’s reaping the benefit of all the time he’s spent training on the boards in Berlin and is just behind the top four teams with Czech partner Denis Rugovac.

I caught the end of night three – helped with the clean up and washing then slept like a baby.

Day Four:
There are cool reminders of indoor track sport’s great days all round the stadium. 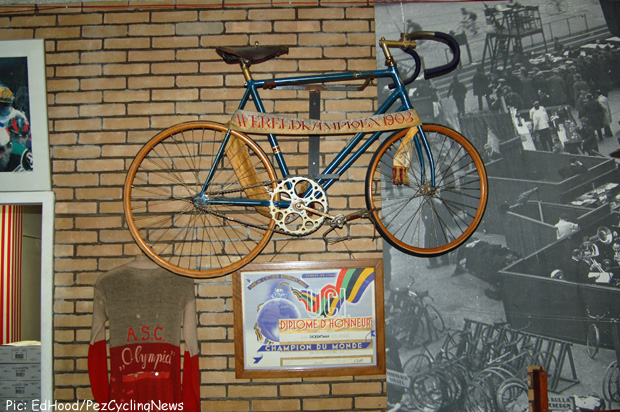 The 1903 world champion motor paced bike isn’t that different from a ‘stayer’ bike of today – but with twin down tubes they were taking no chances. 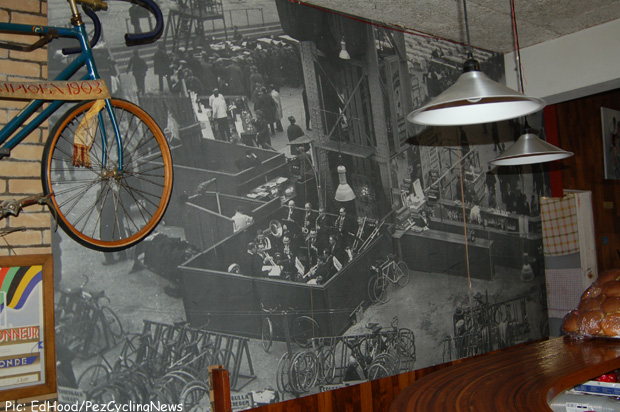 And the ‘band played on’ through the chases back in those Golden Days – on the subject of tunes, they’re not bad here at all. Lots of 70’s and 80’s but right up to date too with Clean Bandit and ‘No Place I’d Rather Be’ – how true. 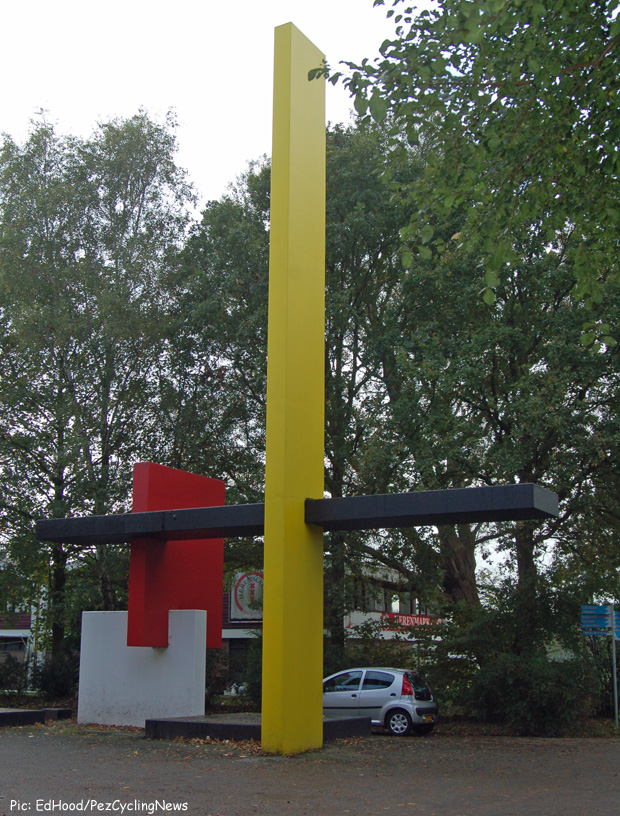 But before we get into the business of racing Kris decided that I should sample the local culture – no complaints from me . . .

In the grounds of the complex is a reminder of de Stijl, founded in Amsterdam almost 100 years ago this artistic and architectural movement still influences art and design. 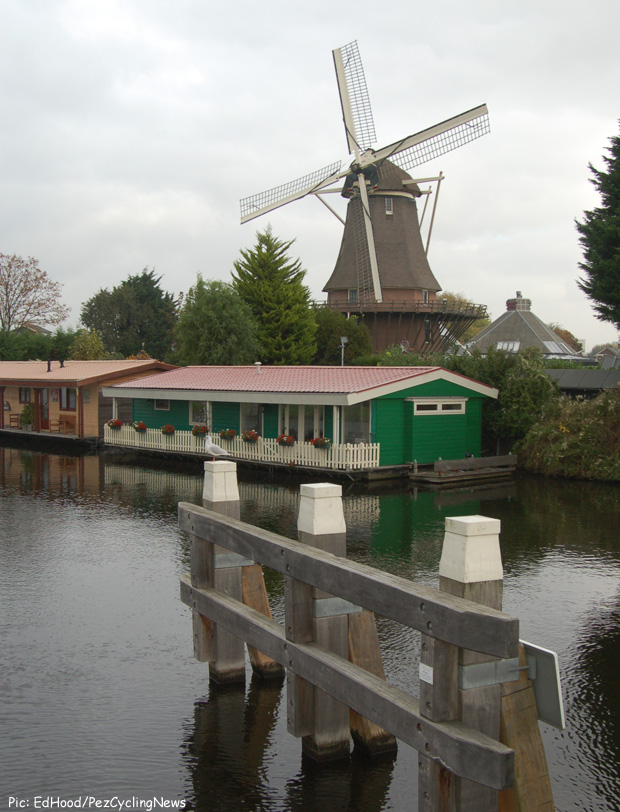 Not far from the track the scenery is lovely, houseboats sit quietly in the shadow of the windmill and there are cafes and bars that would be hard to get me out of. 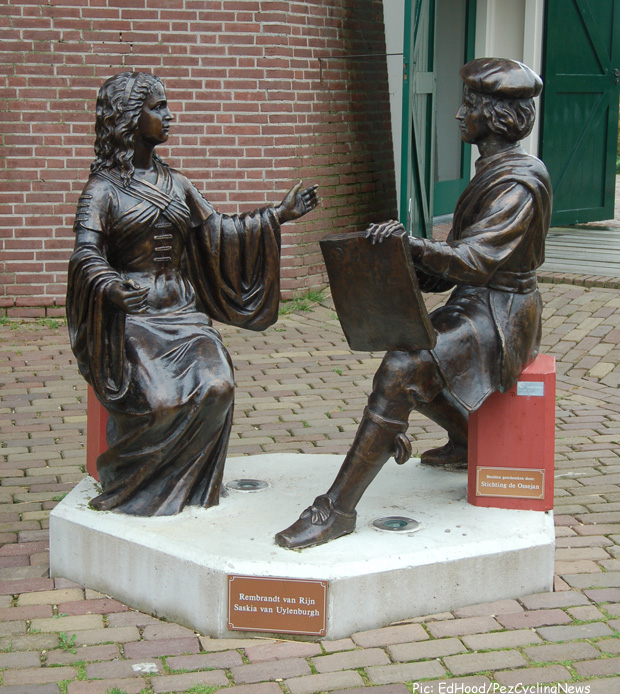 Rembrandt used to frequent these parts and we have a statue to remind us – but there are cabins to tidy, bottles to fill, jerseys to fold . . . 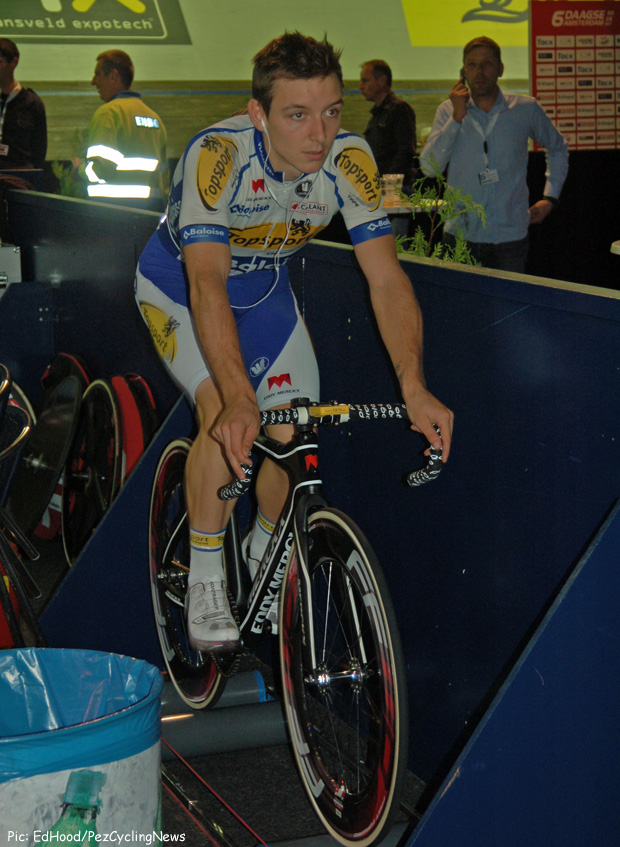 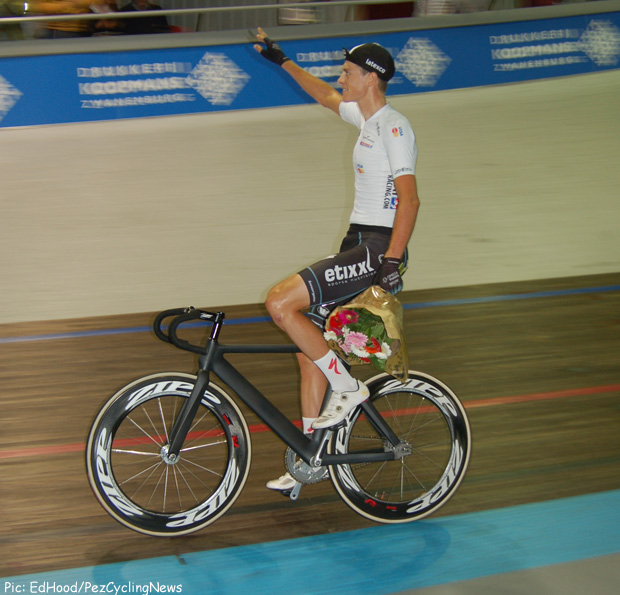 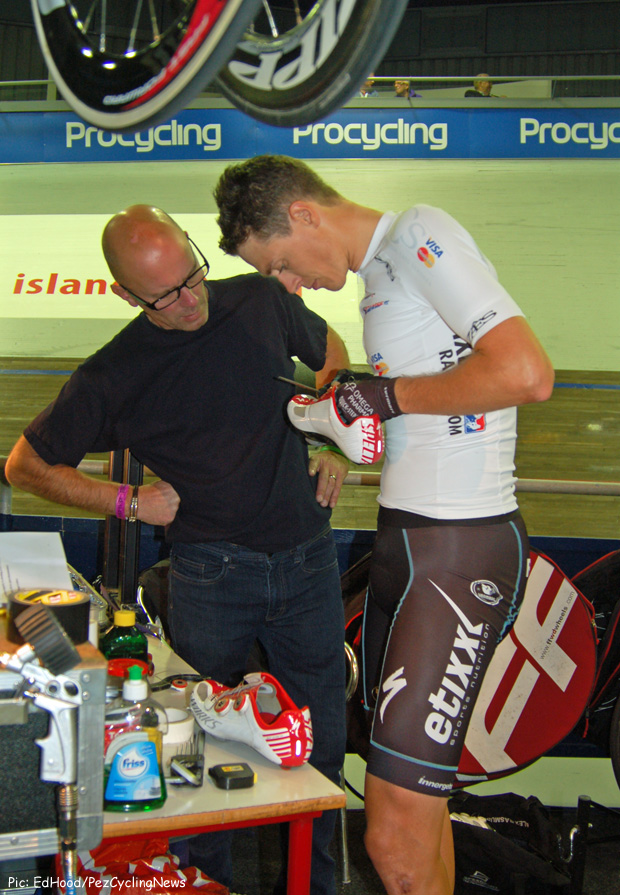 Terpstra won the devil after a battle with his shoes; despite his current Classics stardom his background is on the track – he was in The Netherlands team which took silver in the team pursuit in 2005 in Los Angeles. Also in that squad were recently retired six day man, Peter Schep and big Jens Mouris who’s still laying down serious watts for GreenEDGE in the TTT’s.

The two lap time trial with ‘Hawaii 5-0’ from The Ventures; ‘Eye of the Tiger’ from Survivor and then ‘Born in the USA’ from The Boss for our boys – they go top. 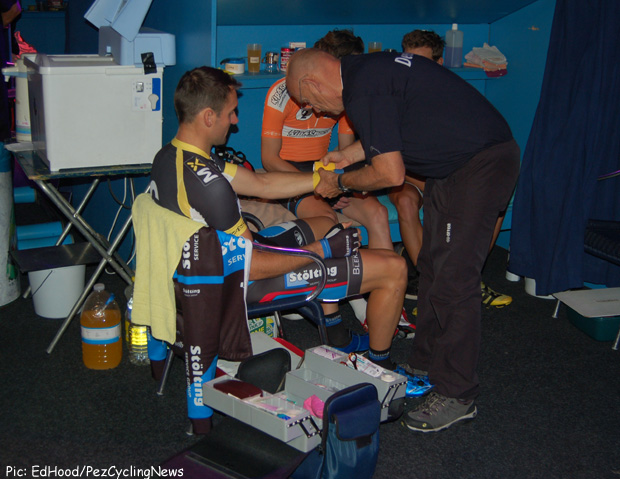 Keirin One and De Buyst wins; Derny Two and Daniel is leading late but he’s bound to have someone come over the top – but he holds them off – and again! 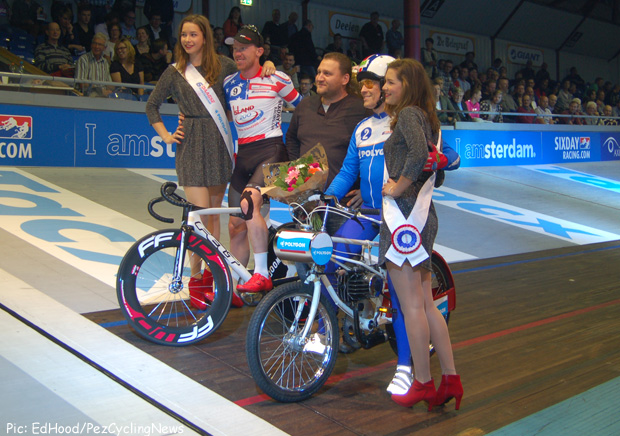 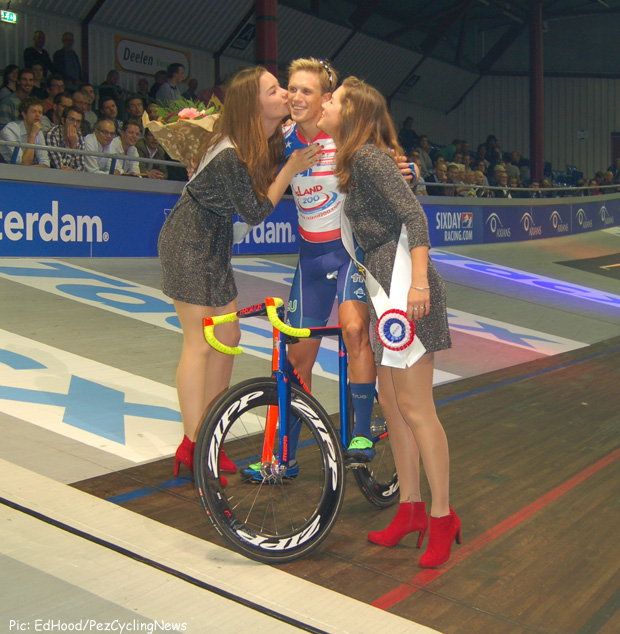 And we’re still smiling about that when Guy wins Keirin Two; good exercise for me as I have to trot round grab their helmets, give them their towel and hat – and it’s always nice to see those podium girls close up.

Van Halen’s ‘Jump’ starts the closing 200 lap chase – our boys were a tad tired after their winning exertions so we won’t say too much about how that one went; save De Buyst’s proclamations that he’s going to win in Gent are sounding more realistic as this race goes on.

Two nights to go and flowers in the cabin – can’t be bad.