The cirque du Six Days was in Gent for the 74th running of this ‘race to nowhere’, and PEZ was right there in the middle of it… Ed Hood takes us inside the boards for a unique look at Cav’s almost win, rising star Jasper de Buysts convincing win, and everything in between.

‘A convincing fix’ says one of our Belgian friends about the last chase; another just laughs when we ask if the finale was ‘straight.’ 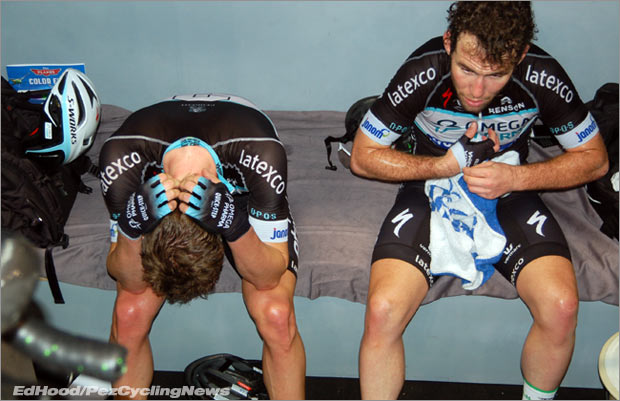 All we can do is ask you to look at the pictures we took; whilst the other photographers were lined up waiting for the leggy podium girls, flowers and speeches we figured it would be better to head for Iljo and Cav’s cabin . 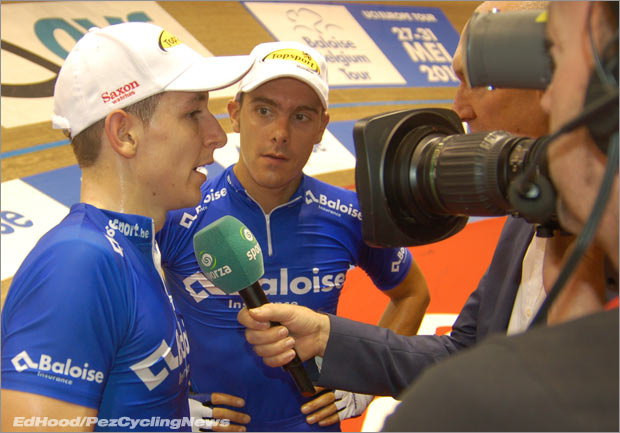 As Kenny De Ketele and Jasper De Buyst handled the TV interviews like the pros they are, Keisse and Cavendish, both close to tears, embraced then slumped into their cabin, the Gentenaar’s head buried in his hands, the Manxman looking stunned and red of eye. If it was a ‘fix’ then it looked more than convincing to us…

Jasper De Buyst told PEZ at the end of the Amsterdam Six Day – where he finished second with Pim Ligthart behind the mighty Niki Terpstra who rode with Joeri Havik – that he was out to win in Ghent.

And the word among the riders was that the 20 year-old – whose 21st birthday fell just today, (Monday 24/11) and who has no problems in the self confidence stakes – was hell bent on the win. 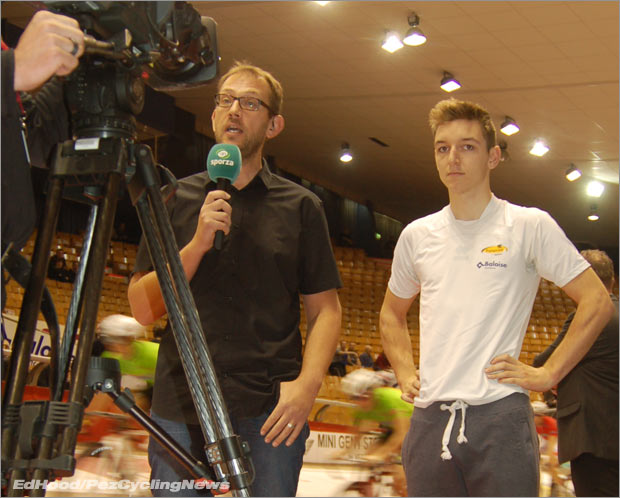 We saw him interviewed for TV just prior to Sunday’s finale and he spoke like a winner. Keisse may be King of the Kuipke but De Buyst has ability, youth and self belief and is no respecter of the status quo – he moves from one six day win off six starts to two wins off seven starts. And in 29 year-old De Ketele he had the perfect ally; a man who’s been world madison champion and has won the Ghent Six Day in the past; his stats now read five six day wins off 51 starts.

Kenny loves the warmth he feels having stepped from Iljo’s shadow when he won the Worlds madison with Gijs Van Hoecke in 2012. 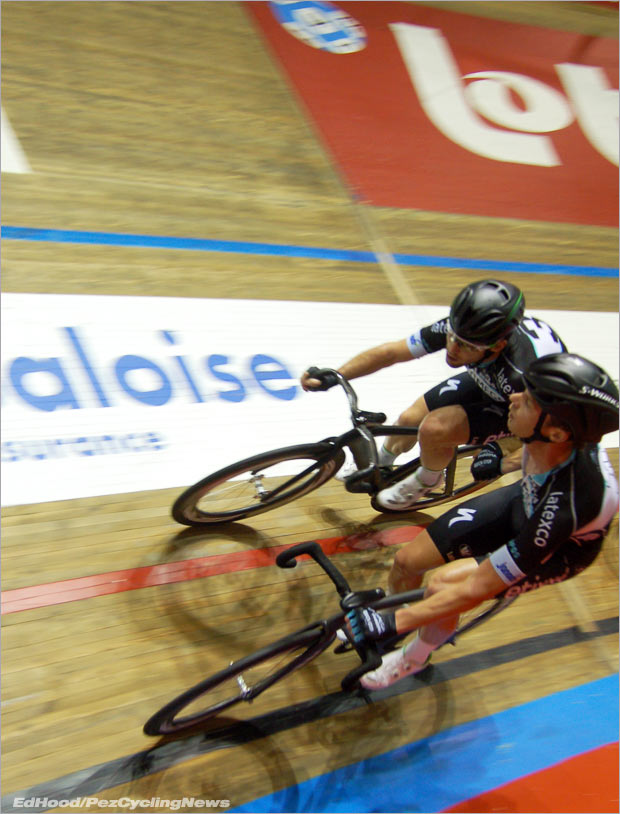 The Flandrian pair’s physical, brute strength style contrasted with the turbine smoothness of Keisse’s accelerations and a very tidy and capable Mark Cavendish. De Ketele in particular gives hand slings which would pull an SUV out of a swamp. No matter how hard the QuickStep boys tried to get the lap they needed to win – with the TopSport pair on a superior points total – De Buyst and De Ketele had all the answers.

It was a case of the beasts getting the better of beauty. One school of thought is that it’s six day protocol that a rider – even one of Cavendish’s stature – can’t come in to the ‘race to nowhere’ milieu and win their first race; and revenge will belong to the QuickStep boys in the ‘Six Day Nights of Zurich’ run over four days, later this week. We await that one with interest. 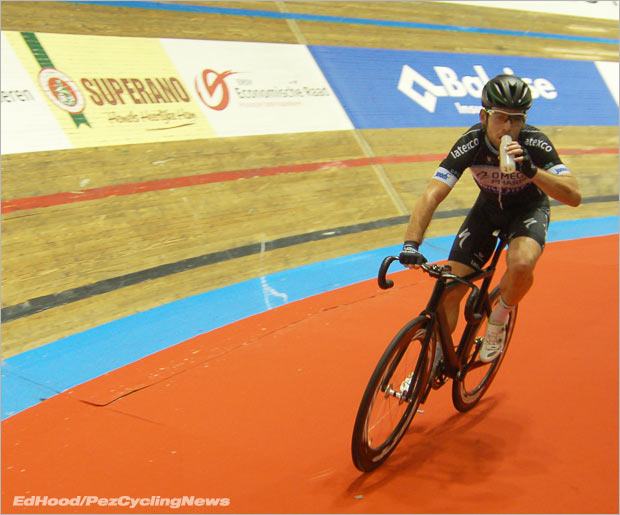 And for a minute in the last chase we thought PEZ was going to be at the centre of an international incident when Cav appeared from nowhere with a drink two metres to the left of where he was meant to be and I had to jump for cover. 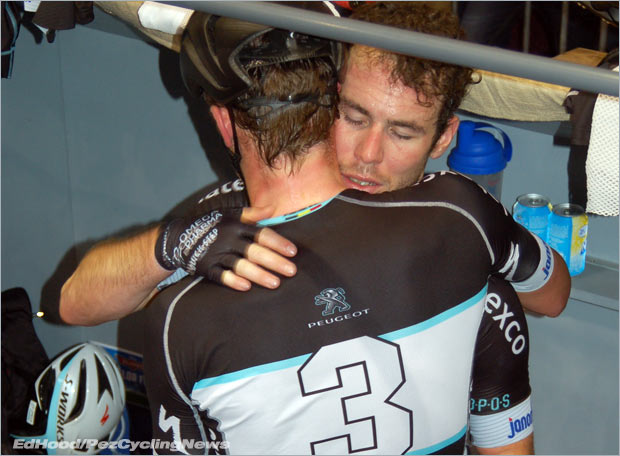 But all we can talk about is what we saw; two broken men with no gallery to play to – just their soigneurs and our Nikon.

On the subject of the Zurich race, one of the men in third spot – BMC’s TTT World Champion, Silvan Dillier is Suisse and highly motivated to win in his home six where he again rides with Ghent partner, Bavarian Leif Lampater who won Ghent with De Buyst last year. 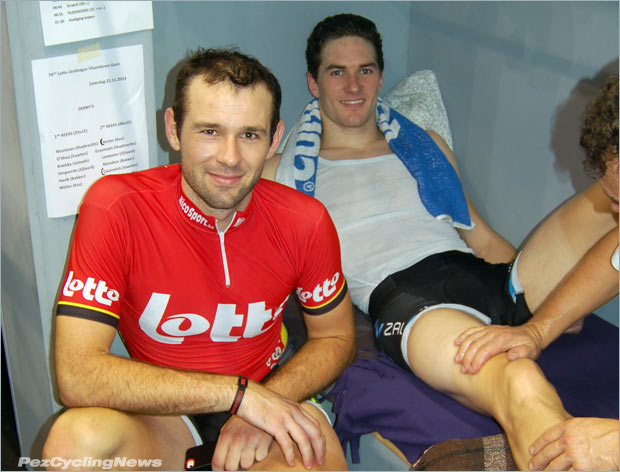 The Swiss/German pairing looked pretty much on a par with Dashing Danes, Alex Rasmussen and Marc Hester – but Leif is one of the main men on the circuit with eight wins off 74 starts and the podium is his natural habitat . . .

We chatted to Alex about his hour record attempt which is scheduled for March on the new track in his home city of Odense. One hurdle he has to overcome is to get himself on the UCi biological passport scheme. No passport means no valid attempt – the UCI only want riders from Pro Continental and Pro Tours to go for the record.

The final chase on Sunday afternoon started quietly, sparked then lulled before a dazzling last 20 minutes. If you stand beside the track, the boards tell you a story; a string riding tempo barely raises a hum; but when it’s ‘full gas,’ like it was late on Sunday afternoon there’s a thunderous roar off the bankings which adds voice to the thousands of fans – with Iljo’s the most vocal.

But it was not to be and the two Topsport Pro Continental riders overcame the mighty QuickStep World Tour duo and Iljo sticks at 19 wins off 74 starts whilst this was Cav’s fourth six day. And whilst Cav hasn’t won a Six, yet – he’s won 123 times on the road. 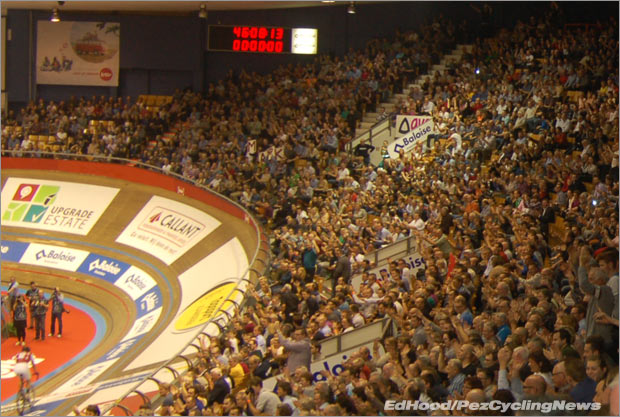 Going back to Saturday night’s racing – it didn’t have us in raptures – it was a little disappointing after the good afternoon of racing we witnessed up at Koksijde but it gave us a chance to catch up with the gossip – and the crowd was huge. Top Belgian track man and team mate of De Buyst and De Ketele, Gijs Van Hoecke didn’t ride due to a broken thigh he sustained in a crash in Paris-Tours. 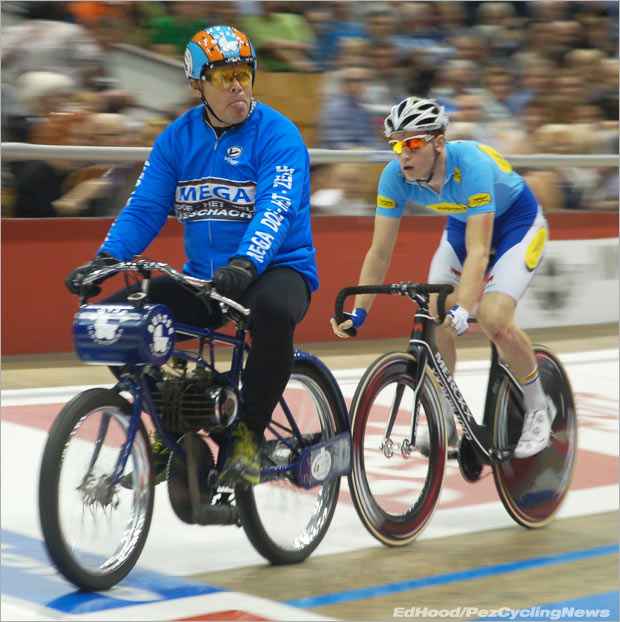 A pity, he’s one of this new generation of young Belgians on the way up, along with recent European Scratch Championship winner, Otto Vergaerde who rode here with Nicki Stopler and there’s also the quick in the Kuipke time trials Belgian, Moreno De Pauw who partnered Germany’s Christian Grasmann – with both Belgians riding for Topsport. 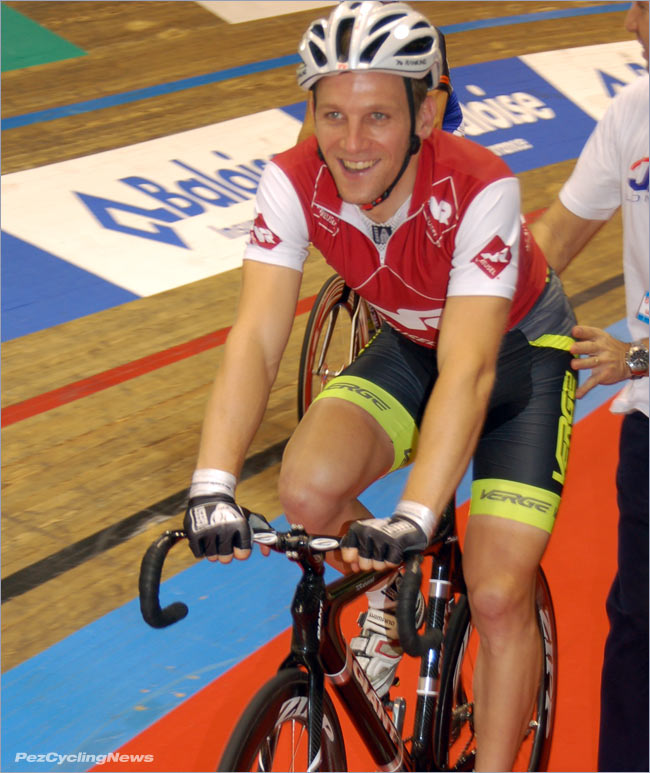 We wondered why Andreas Muller wasn’t riding with fellow Austrian, Andreas Graf after the duo won the European Madison Championships in Guadeloupe recently – and the pair have twice been fourth in the Worlds madison. Andreas explained that the contracts for Gent were signed just three days before the Europeans and that Graf was first reserve for Gent but everyone showed up. 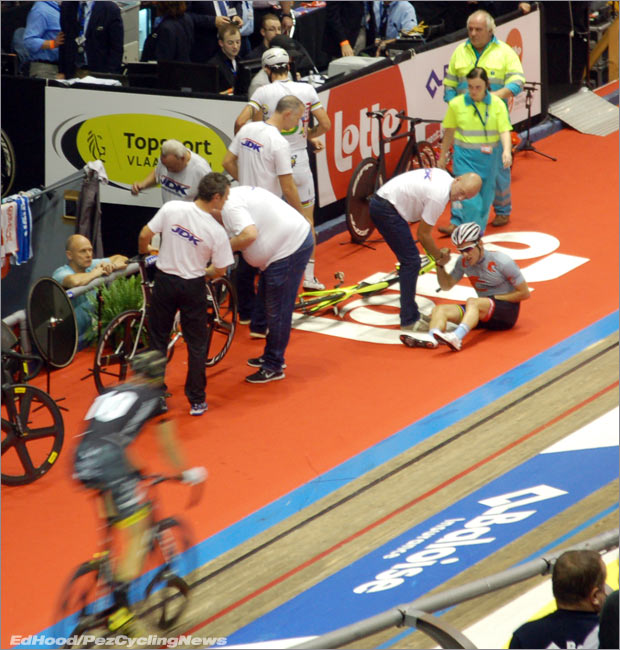 But there were ‘moments,’ like former World madison Champion Vivien Brisse hitting the deck rather hard. 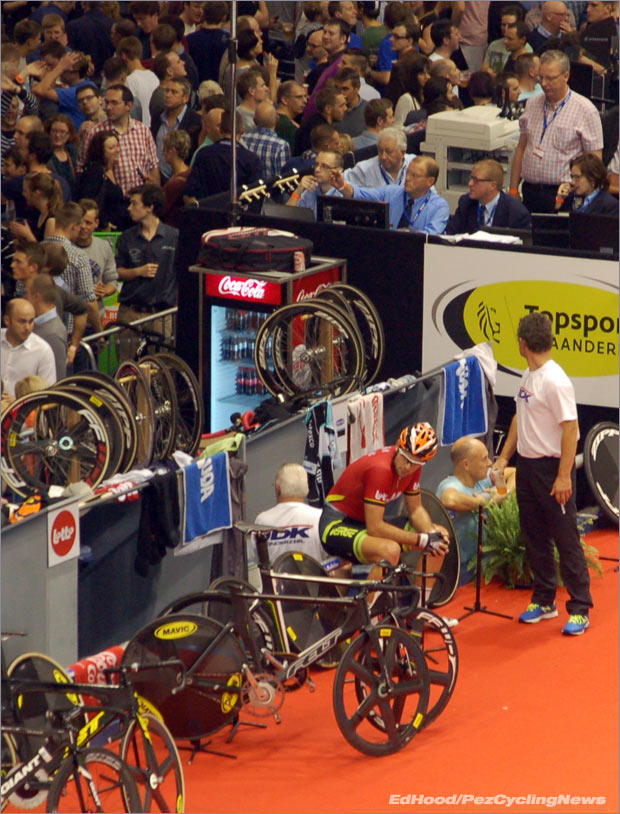 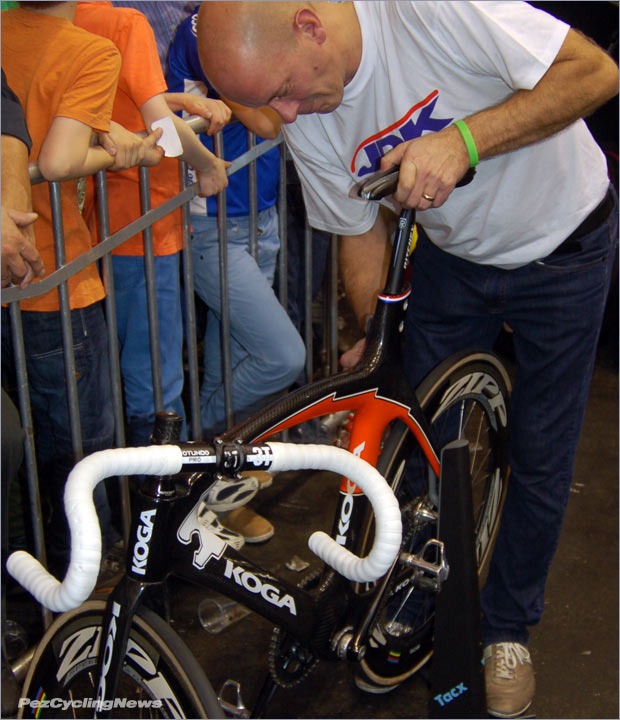 Not to mention Alex sitting on the fence waiting for his bike – we thought it was taking a heck of a time for Dirk to change a wheel but Alex’s Koga had in fact suffered a broken seat post. He’s a big chap is Mr. Rasmussen. 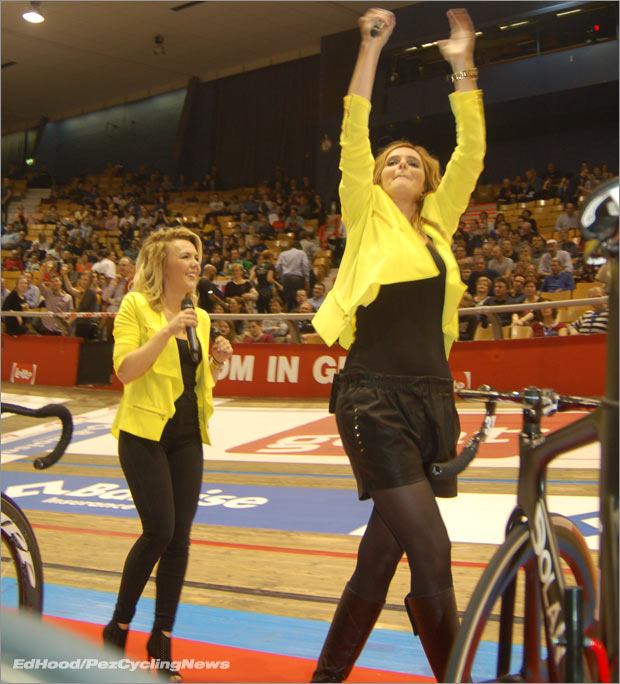 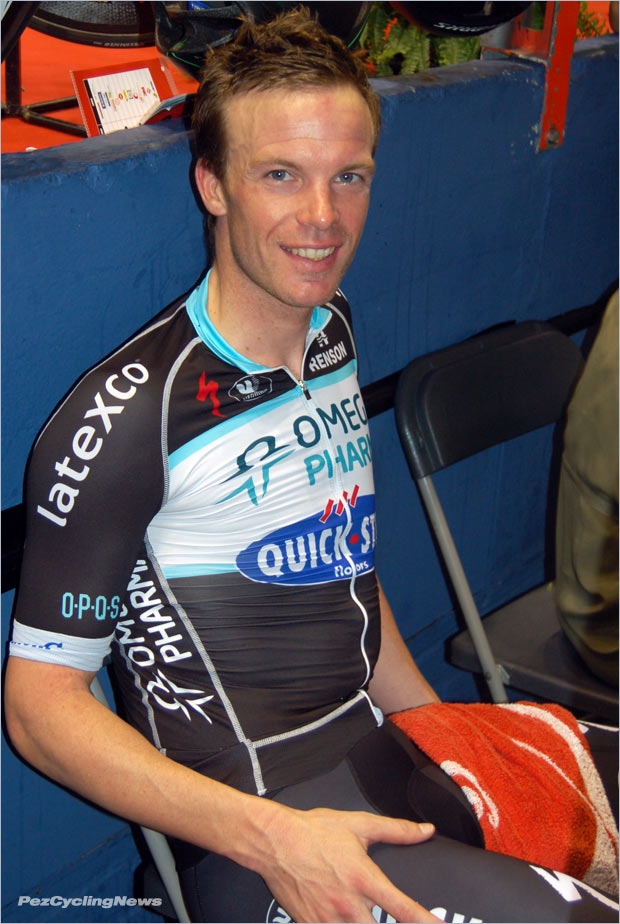 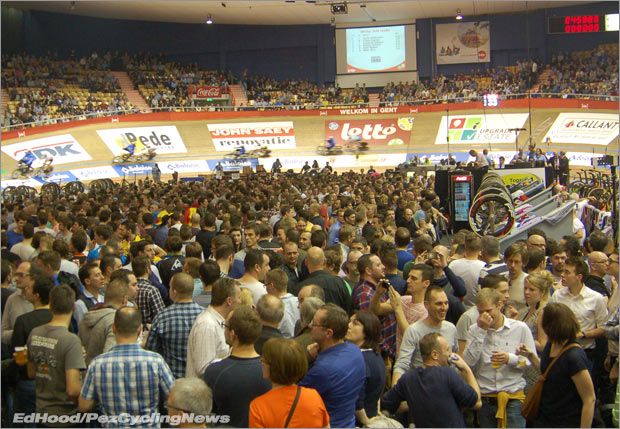 And of course the Dernys droned all the while and the Jupiler disappeared by the barrel. 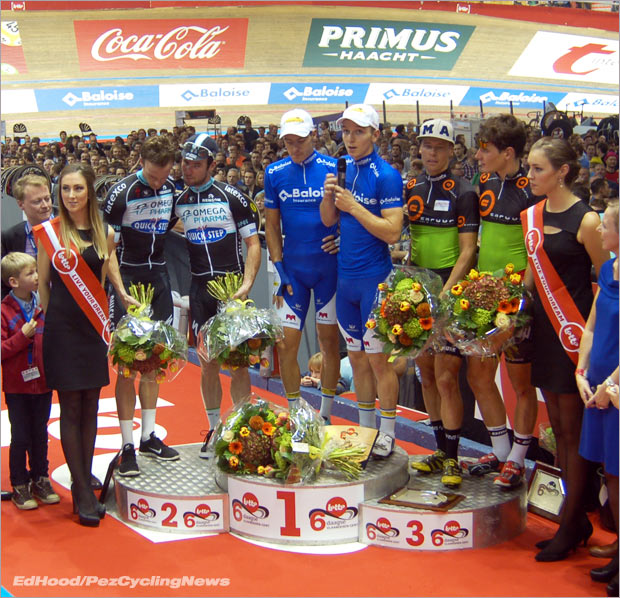 Overall, perhaps not the greatest 6 Daagse Vlaanderen-Gent we’ve ever witnessed – but those last 20 minutes were damn fine racing and like we say, if it was ‘arranged’ then Team #3 will be in with a shout for an Oscar

“It was November 2005 when Ed Hood first penned a piece for PEZ, on US legend Mike Neel. Since then he’s covered all of the Grand Tours and Monuments for PEZ and has an article count in excess of 1,100 in the archive. He was a Scottish champion cyclist himself – many years and kilograms ago – and still owns a Klein Attitude, Dura Ace carbon Giant and a Fixie. He and fellow Scot and PEZ contributor Martin Williamson run the Scottish site www.veloveritas.co.uk where more of his musings on our sport can be found.”