From rider to journalist to organiser – Lee Rodgers has seen all sides of the majestically beautiful yet spectacularly cruel race that is the Taiwan KOM Challenge. Today he looks back at his experiences from this truly unique climbing race which is gaining every year in stature and prestige.

He was a mess even before he crossed the finish line. Quite how he did it evades me now still. He zigged and zagged up that last kilometer with its average of over 20% like a drunkass salaryman staggering along a Tokyo street on Friday night. I pulled him off his bike and he sobbed as I helped him. He was not looking good…

Three years ago, back in 2011, I rode the Taiwan KOM Challenge and afterwards wrote an article about my experience for the cycling website I was editing at the time.

You might have heard of this race. The course starts at just about zero meters and finishes 3,275 tough and grueling meters higher up, and is run over 105km. I was so badly beaten and bruised by the whole experience, mentally more than physically (and all despite coming 4th), that I wrote what was intended to be a diatribe against that malicious great lump of volcanic rock that is Mt. Wuling in just thirty minutes.

I let the fingers run over the keyboard as I spat out a stream of consciousness so fast that I barely had a moment to consider what was coming out. 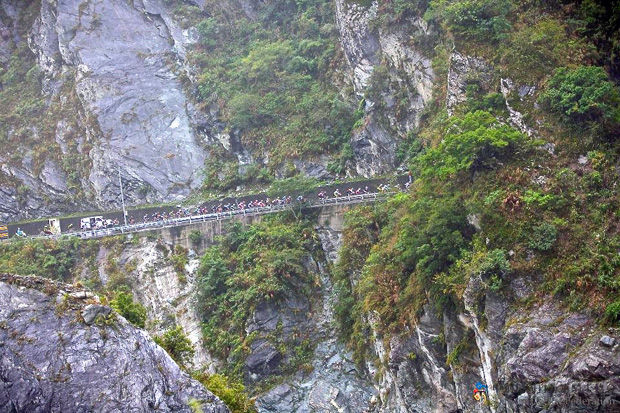 I pulled his fingers from the bars where they had been holding, as if for dear life, for so long. They were ice-cold and I could see – anyone could see – from the blue hue that had taken over his skin that he was close to hypothermia.

He was wearing not enough for where he was, but how do you adequately dress for a 5 and a half bike ride up a massive mountain through clouds of mist and chilling, pouring rain, from zero meters to an altitude of 3,265 meters?

How do you prepare for a challenge like that even in fine conditions? There’s always a 6 to ten degree at the top of the mountain and the altitude increases the strain on the system to the point where, in some cases, the body begins to shut down non-essential functions, making the actual effort of riding a bike up so high and hard a road somewhat of a voyage into madness…

When I then sat back and read the original article, I discovered not the article full of vim and vigor that I had intended but rather one that read more like a love letter, one that combined elements of an elegy to some former self of me that I had shed on the slopes of that beast, along with a clarion call for others to come experience something unique, something that was, either in spite of or because of the suffering it dished out, irreconcilably beautiful. 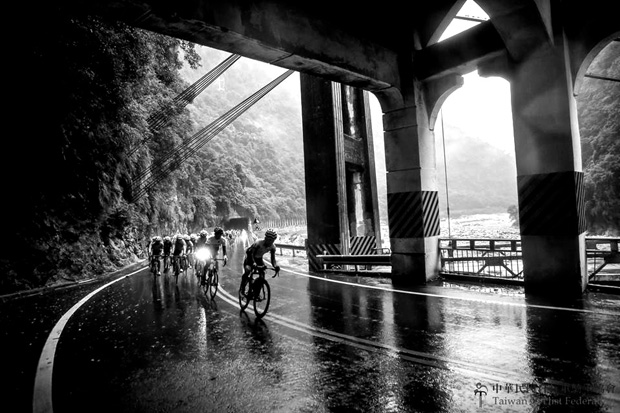 A couple of weeks after this was published I received an email from the organisers of the Taiwan KOM Challenge, the Taiwan Cyclist Federation, asking me to come on board to help them to spread the word of the event and to bring in good foreign talent to ride it. I accepted and became the Director of International Communications for the Taiwan KOM Challenge in January 2013.

Just under two years on and the Taiwan KOM Challenge is growing to the point where whispers about it can be heard amongst the ProTour peloton – rumor has it that a very able Colombian may be heading out here for the 2015 edition (we’ve already had WorldTour French Pros Anthony Charteau and Jeremy Roy come – they didn’t win). 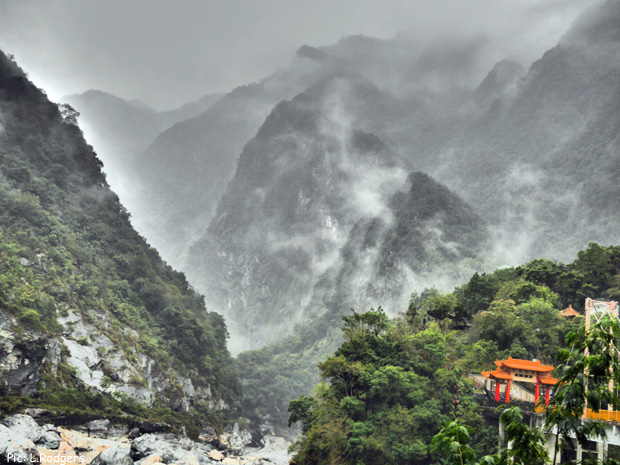 The press release announcing the race was posted in CyclingTips, VeloNews, Road.cc and here in PEZCycling, amongst others, and the post-race reports are flying out all over the world.

I hoisted him over to an open tent where I dropped him onto a small plastic stool. I asked where his day bag was with his warm clothes in it but he hadn’t packed one he said – he’d intended to ride back down the mountain, something that is against the actual rules but about which I was not going to complain about just then.

I asked one of the staff to look after him as I was being called to the podium to announce the winners – Johnn Ebsen of Denmark (Androni-Gioccatoli) and Marg Fedyna of Canada. Before I left him I filled his bidon with ginger tea, telling the staff to get him a jacket.

He sat hunched on his stool shaking like a refugee in the wastelands, shaking so hard I could hear his teeth clattering and his bones shiver… 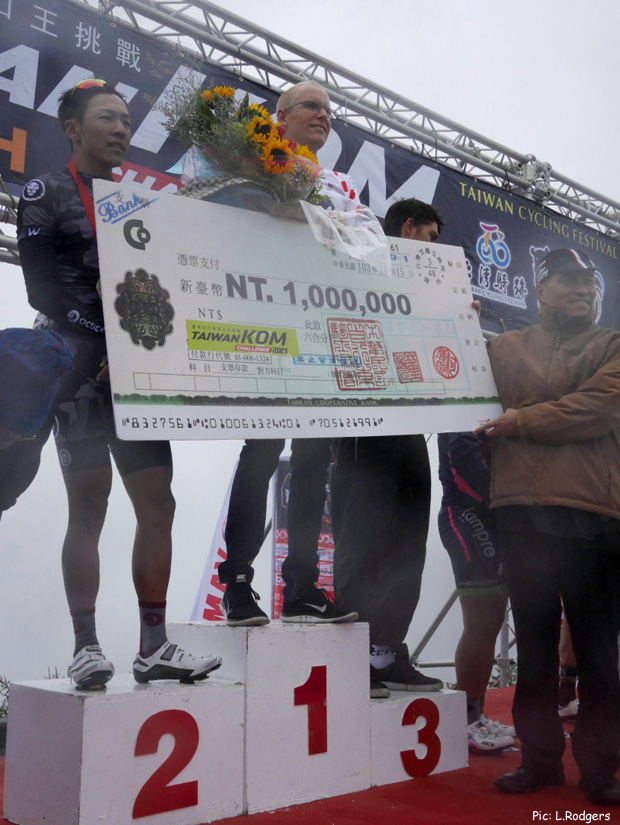 Through the mist you can make out Androni bound John Ebsen with one big payday.

Running an event is a whole different ball game to riding one. Riding one is simple, relatively. Train, turn up, ride, go home.

Running one – and I do not at all take any of the credit for all that the Taiwan KOM Challenge is, I am just a small cog in the greater machine – is akin to a military operation. Every single detail has to be considered and every possible scenario played out beforehand, and even then you will make mistakes and leave holes in preparation. 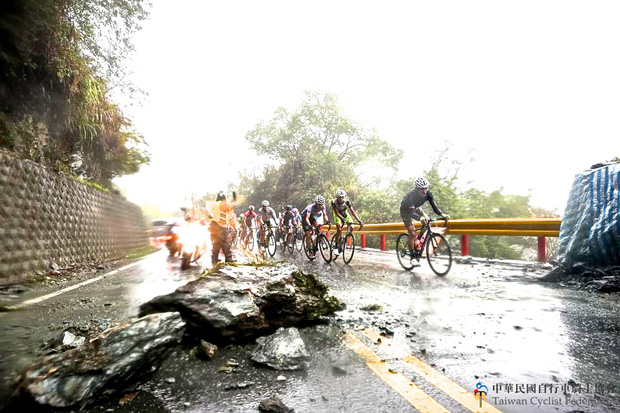 Wet, freezing conditions and even landslides greeted the riders in the 2014 edition

Riders will blissfully ignore all that goes well with an event if one little thing goes wrong, and that I guess is just something you have to deal with. In some cases they are right to complain but often the strength with which they do is informed by a zeal which, once the heat of competition has dissipated, will become more forgiving in hindsight.

Organisers on the other hand have a duty to put themselves in the riders’ shoes and to expect the unexpected. So many races I have been involved in as a rider leave you feeling like you’re little more than a dollar sign or, perhaps more fittingly, a pound of flesh. We’re still learning at the Taiwan KOM Challenge and we strive to become the premier hill-climb event in the world if we are already not that. We want this to become the Unofficial World Hill Climb Championships. We have a long way to go but we are both excited and confident about all this. 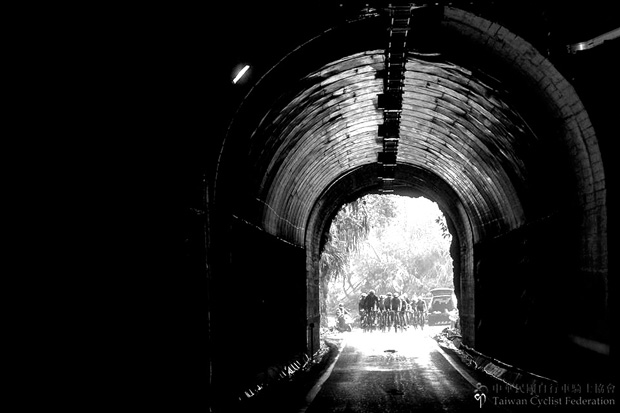 When I came back from the awards ceremony I saw that Blue Guy had been left and was still wearing only his kit. I learned later that the staff member I had directed to look after him had had to take off to save a rider in even worse shape.

He was sat hunched over and furiously rubbing his legs. His shoes were off and his bare feet were on the wet cold ground. His shivering was worse even than before.

I put my arm around him and carried him to one of the media vans, shouting at the inhabitants, who were napping, so open up. I got him sat down and took off my jacket and wrapped it around him.

My name was being called again over the loudspeaker so I had to run. I told the guys to keep the heat up and grabbed a sandwich for Blue Guy, pushing it into his claw-like hand…

We made a huge step this year, a big decision that has culminated in many warm messages of support, something we had not expected. After last year’s race was criticized due to its winner having just returned from a 2-year doping suspension, which led to negative press for the race, we decided that we needed to make some changes.

We would bring in doping tests for the top finishers. We also decided to take the unusual step of banning any rider who has ever been banned, at any time in the past or presently, for a doping violation. Furthermore, we also reserved the right to deny entry to the race any rider whose presence we feel would tarnish the integrity of the race.

Why? It’s simple. We are riders too. And as organisers, we expect what the participants expect, and have every right to demand – a clean, fair race where a clean rider wins. The spur was the experience of the previous year, and the fact that the prize money this year totaled in excess of $80,000US, with $36,000 going to the first man over the line.

The policy has been a success, drawing the 2014 Tour of California KOM winner Will Routley over to Taiwan along with former World and Olympic champion Nicole Cooke (working as a journalist), and it has got us even more traction in the world media. We’re limited by the number of riders we can send up the mountain due to legitimate police concerns over safety, but as far as prestige and renown, the sky is the limit. 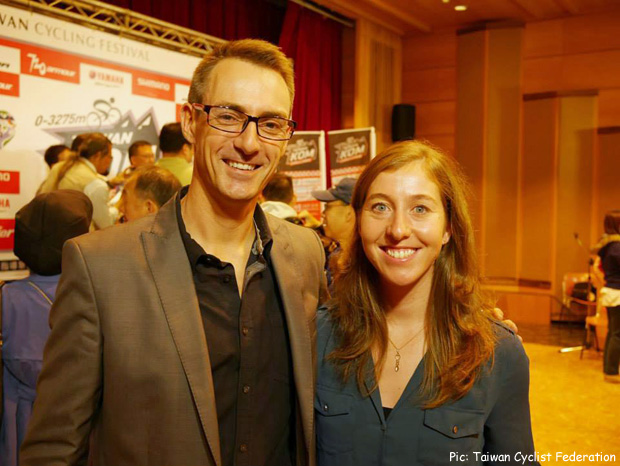 Finally my work on the summit was over and I returned to Blue Guy, opening the door of the van to be greeted by a pink man I barely recognized.

Smiling and drinking more tea, he held out his hand and said thank you.

‘I’m glad you’re feeling better,’ I said. ‘I think it was touch and go there for a bit, you looked pretty bad.’

‘Oh I felt awful, just awful. Just could not warm up.’

‘Hell yes,’ he shot back without hesitation as though he’d forgotten completely the last thirty minutes of intense blueness.

‘That was the hardest and most amazing ride of my life…’ 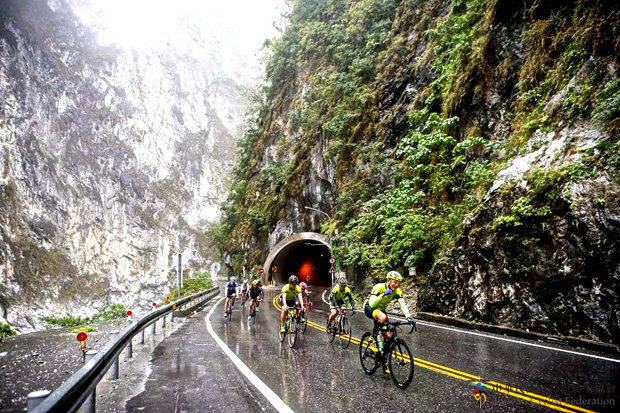