PEZ’s Ed Hood spent the weekend in Belgium – taking in the best of winter cycling at the Gent Six Days & the Kokside Cross races. Click in for a trackside photo report of the boards, the bikes and the boys who pedal through anything – including axle deep sand.

On The Boards
The ‘big’ chase on Friday night was our first taste of the race – like Bob Williams said; ‘it’s the fourth night . . . 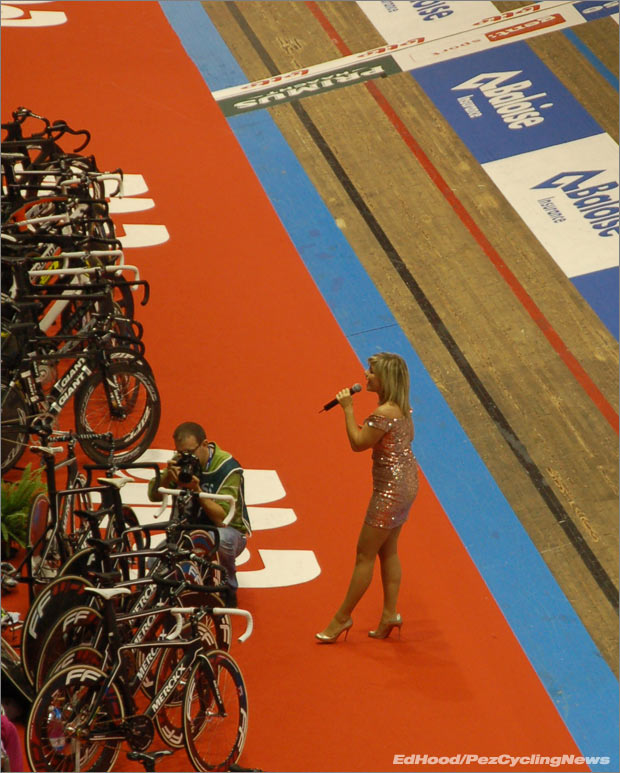 Suffice to say that the Derny race wasn’t any less ‘flat’ albeit “Lindsay” the singer in the spangly mini-dress who strutted round the slow running lane with the radio mic belting out EuroPop did perk us up. The lure of frites proved too much however, albeit Callum’s choice of ‘Samurai’ sauce instead of mayo was a brave one.

Frites duly munched it was Vivaldi time – the pils was cool and so was the 70’s soul. Carole Douglas, ‘Doctor’s Orders,’ the extended version – nice.
But I wonder who the chain smoking dude with the leather jacket and Bentley is . . .

Saturday dawned bright and beautiful – an ideal day for a trip to the coast and the World Cup cyclo-cross in Koksijde. But not before a visit to the BMC concept store/service course which is only a few kilometres outside Gent.

It’s big, bold, sleek and even the customer toilets come straight out of an architectural magazine. There were four staff on duty and zero customers when we arrived to tyre kick – but the guys were happy to have someone to chat to. They didn’t have keys for the service course but told us that the team have already been testing new tyres for Paris-Roubaix, 28mm jobs.

And there was cool trivia, like the fact that the removable gear hangers on the Time Machines are made of steel instead of alloy to give a more positive shift – and there’s much less chance (Garmin might not agree) of crashing in a TT or TTT so the hanger snapping before the rear mech is damaged is much less of a consideration.

Unfortunately they didn’t have keys for the trophy room wherein sit Philippe Gilbert’s World’s winning machine hangs alongside Taylor Phinney’s US champion’s liveried Time Machine – and the big American’s trophy for winning in Oman is there, too. 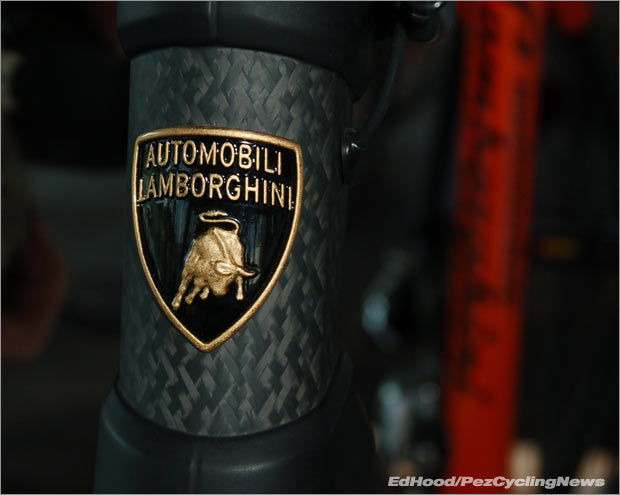 And whilst the 25 grand BMC/Lamborghini road bike was a little out of our price range we did like the no nonsense Dura-Ace track machine for under 2,000 Euros – it looked like a good value tool to us.

To The Cross!
At Koksijde we handed our 15 Euros each over and headed for the camper vans. You can’t call yourself a top ‘cross guy if you don’t have a camper van. 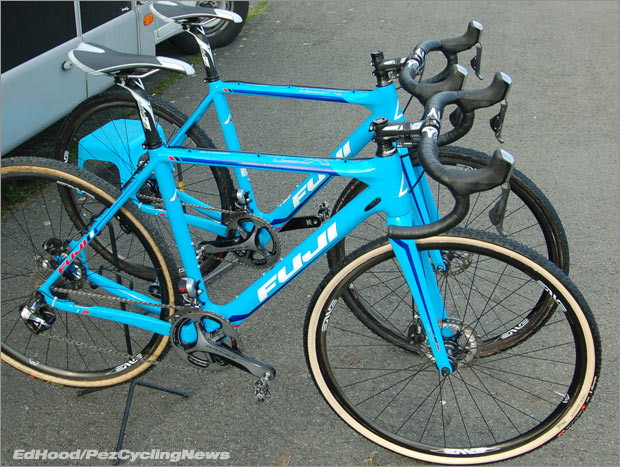 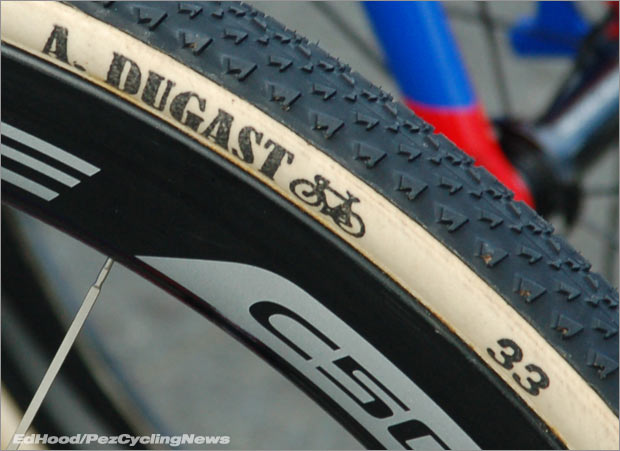 The first hardware we drooled over were the lovely blue Fujis of former US champion and Worlds silver medallist, Jonathan Page. Like just about everyone, Page was on fat 33mm Dugasts but his choice of braking – discs, isn’t yet universal. They are on the rise however, with podium finisher Mathieu Van Der Poel (The Netherlands & BKCP Powerplus) relying on the new technology. 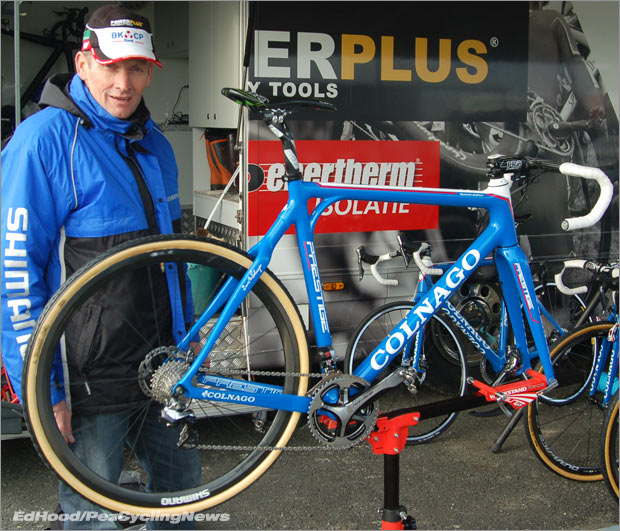 Mathieu had his bike set up by his dad, Adrie who as a former world champion knows a thing or two about prepping ‘cross machines. 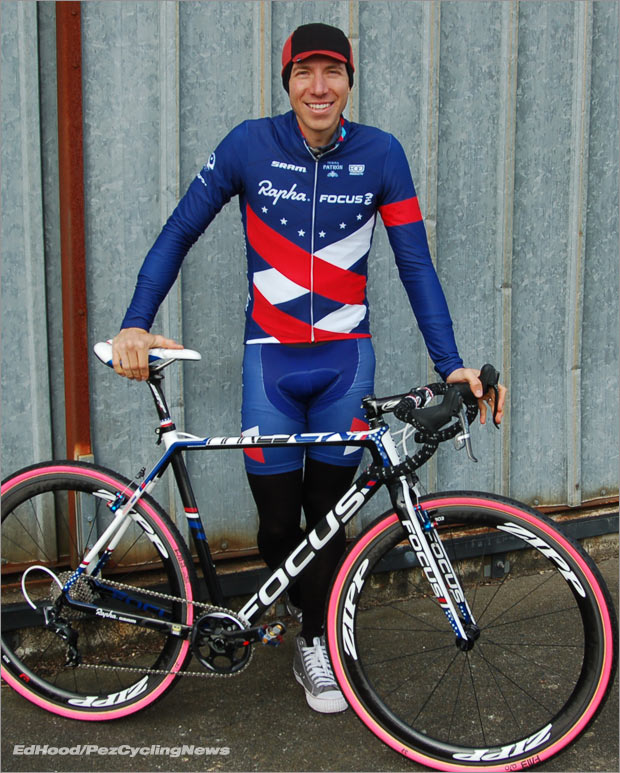 Ever-smiling Jeremy Powers was happy to chat to PEZ, showing off that nice Focus running on pink FMB’s at $200 a pop. His transmission is interesting, a single SRAM ‘thick and thin’ chainring drives 11 sprockets giving one less mechanism to worry about and as wide a spread of gears as is required for just about every X parcours. 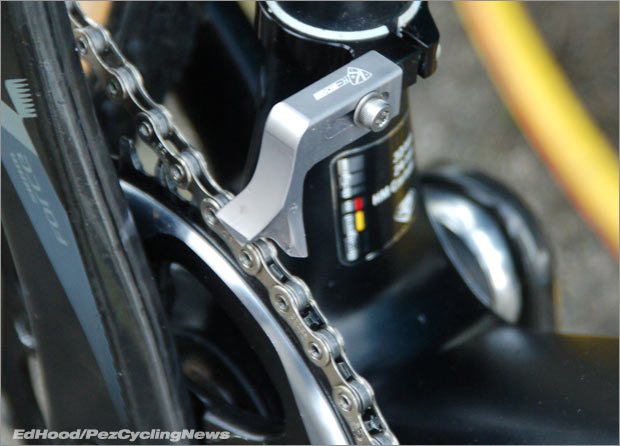 But despite the SRAM system’s design, which is highly capable of keeping the chain where it’s meant to be – some teams don’t take the chance and fit home spun chain holders. Meanwhile, over at the Sven Nys Show, there was a Trek Farley 8 ‘Fat Bike’ hanging out with the Belgian legend’s sleek ‘cross machines. 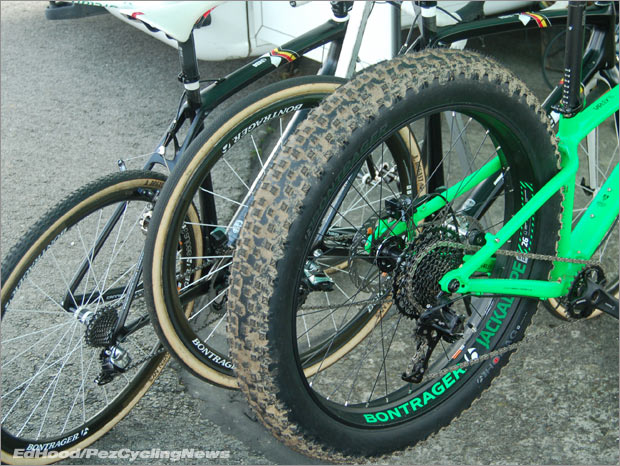 You only think 33 mil. Dugasts are fat ’til you put them alongside the Farley’s 3.8″ rubber… 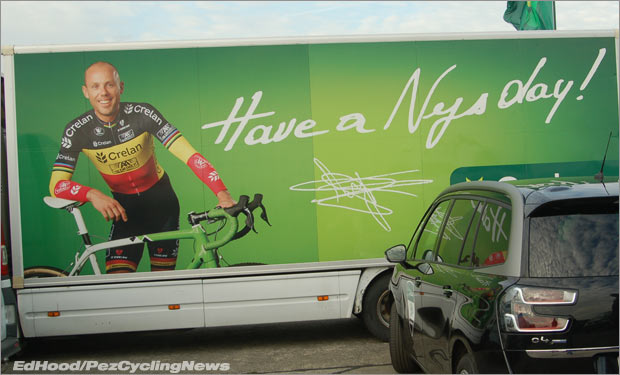 Sven may be in the autumn of his career but he’s still hugely popular – and when he hits town, he’s hard to miss. 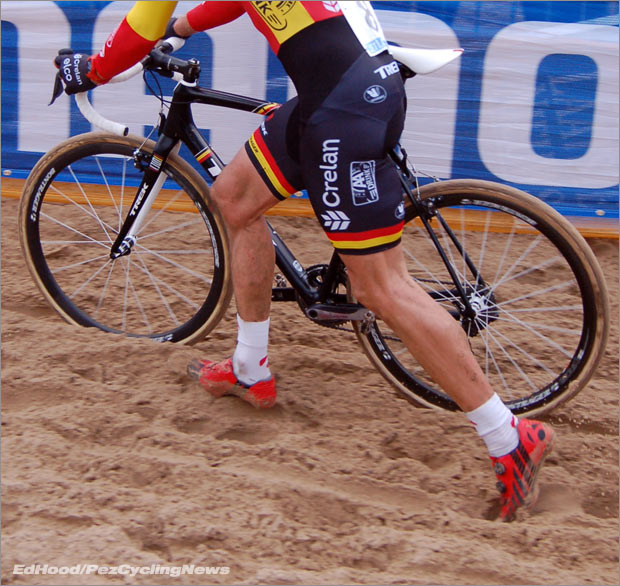 Albeit this wasn’t Sven’s day and we saw him run where normally he’d ride; his distinctive red, yellow and black Belgian champion’s jersey not in its usual place at the head of affairs. Whilst Sven sticks with cantilevers on his Trek, popular New Zealander, Angus Edmond’s Niner runs on discs. 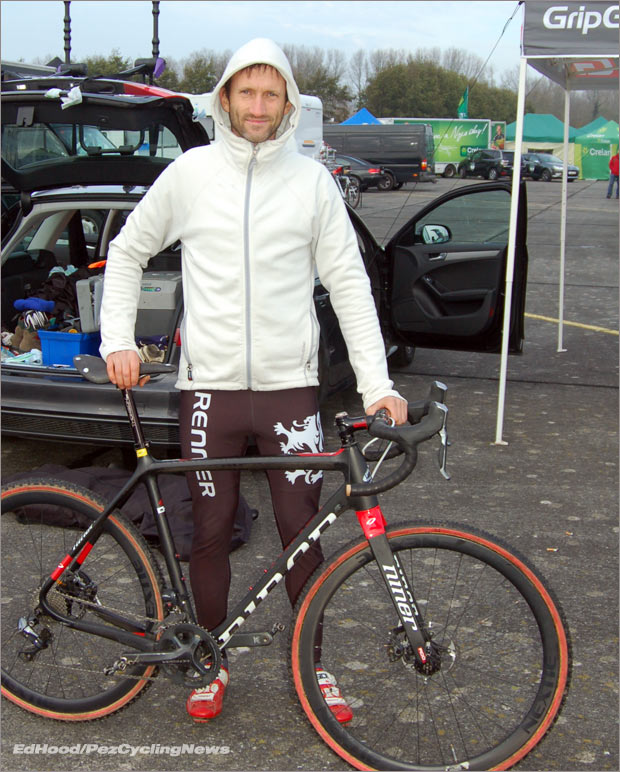 ‘Are you looking forward to this one, Angus ?’ we asked.

“No, it’s horrible, I hate Koksijde!”

But he likes discs; “you can brake much later with them.” 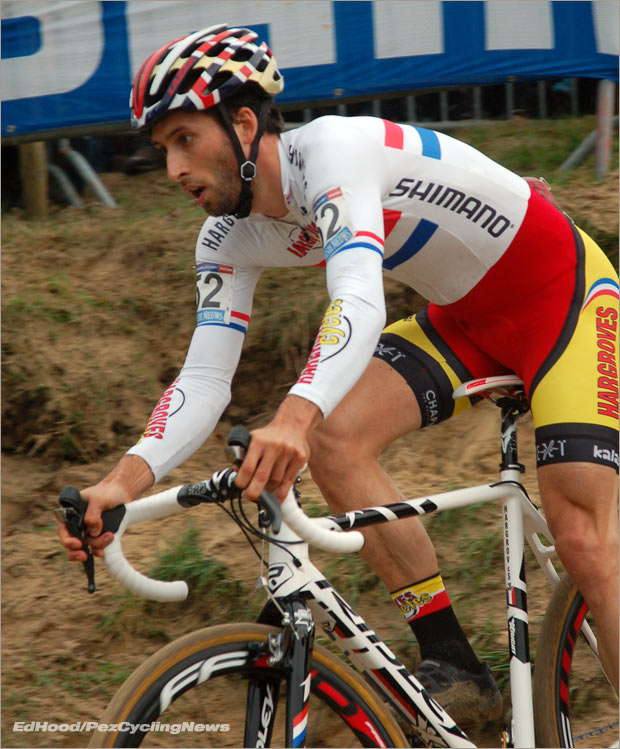 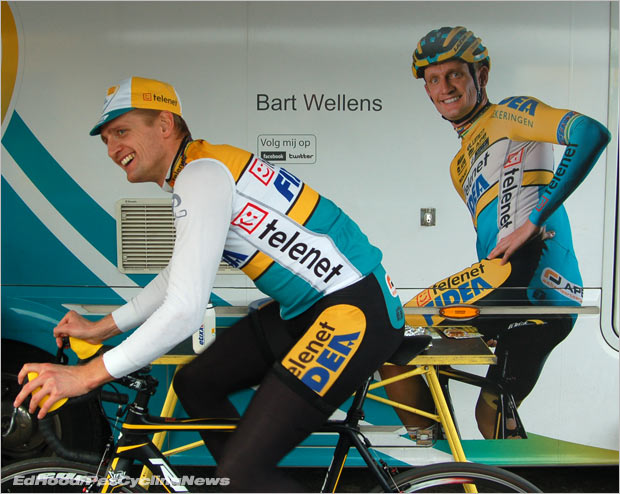 Former double world champion, Bart Wellens (Belgium & Fidea) may be an ‘oldie but goodie’ these days but he was still top ten here and a happy camper on his turbo as he warmed up for his day at the office. 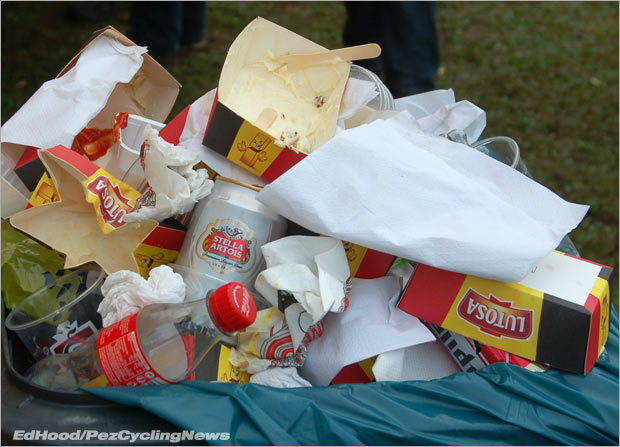 But enough about bikes, there’s frites to eat and pils to quaff – and even the frites boxes are in Belgian national colours. 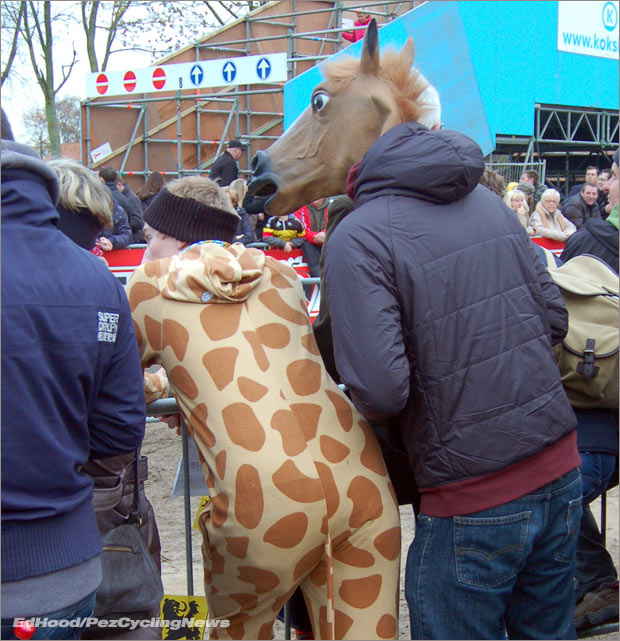 Koksijde really is one for the specialists, you either love the sand or hate it. Neils Albert was the king of the dunes – we watched him run away with it last year – but he was forced to retire prematurely and immediately due to heart problems earlier this year. Lars van de Haar and world champion, Zdenek Stybar apart, all of the big guns were on the grid – as well as Nys and van der Poel there were Kevin Pauwels, Tom Meussen, Rob Peeters, Klaas Vantornout . . 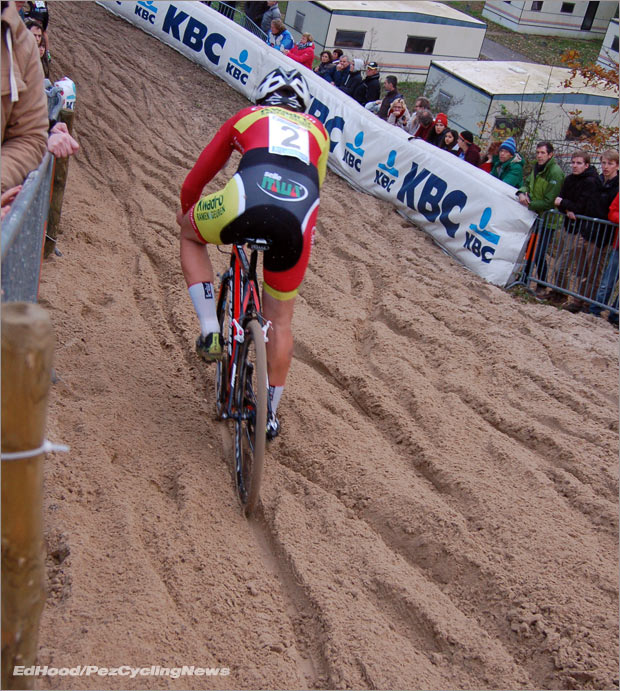 The sand is brutal to ride through, momentum is everything; even on descents and you have to be line perfect or strong/agile enough to fight the deep ruts in the sand. This isn’t the kind of race where mini-pelotons chase one another; it’s every man for himself – try and find a rhythm and get the lines right. 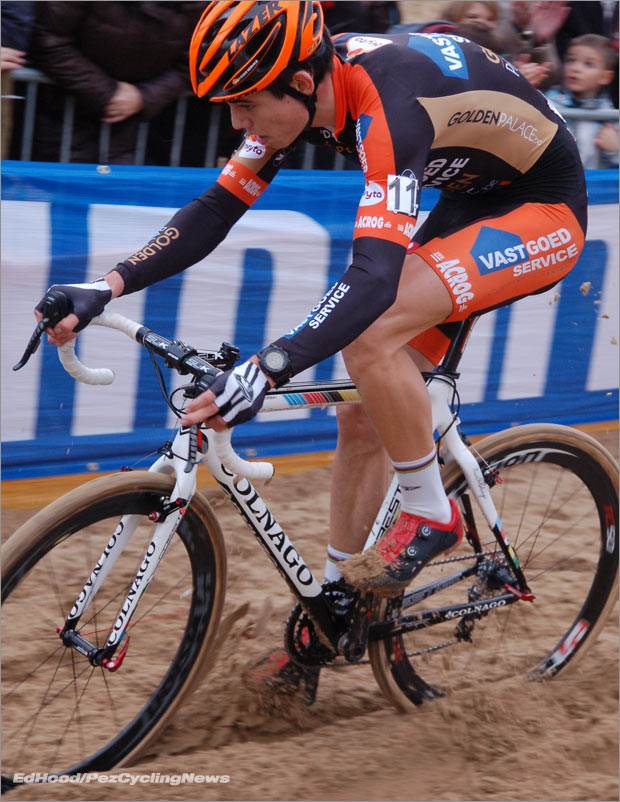 It only took a lap or two for World Under 23 Champion, Wout Van Aert (Belgium & Vastgoedservice-Golden Palace) to assert himself, riding steadily away from everyone for an eventual solo win. His lines were good and his power on the sand climbs very impressive. 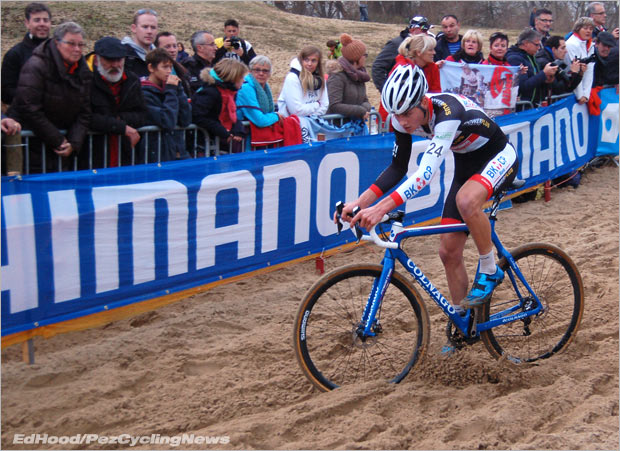 In second for much of the race was World Junior Cyclo Cross Champion, Mathieu Van Der Poel (The Netherlands & BKCP Powerplus), the man with the famous dad is also a former World Junior Road Race Champion and surely destined for great things. 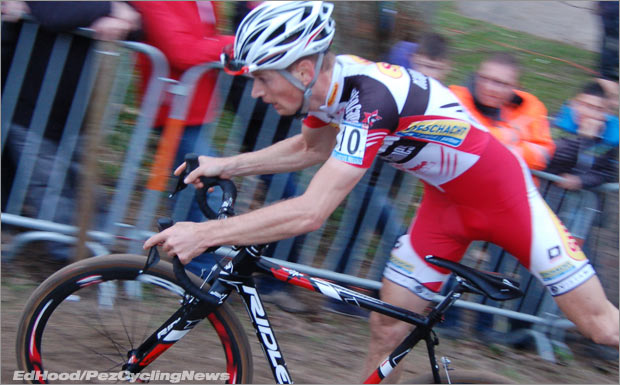 But he began to run out of gas late in the day to finish third behind late charging Kevin Pauwels (Belgium & Sunweb-Napoleon Games). 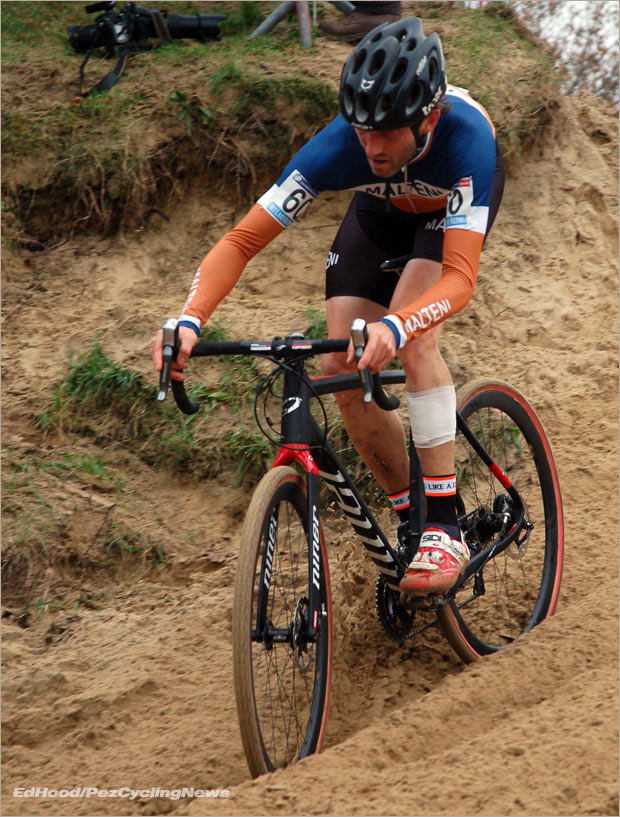 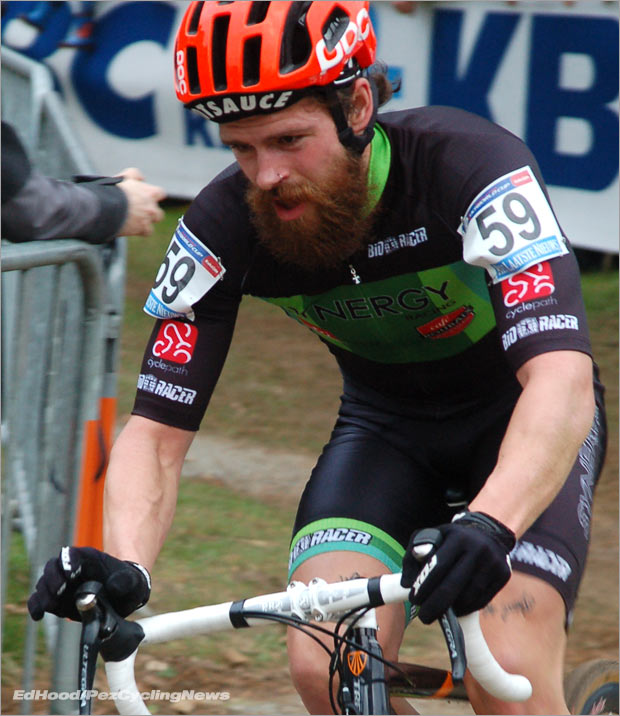 Our boy Angus was pulled out before he was lapped as was Canadian, Mark McConnell who sports a beard any Frontiersman would be proud of and gets huge cheers until the UCI guys cry; ‘Finis!’ 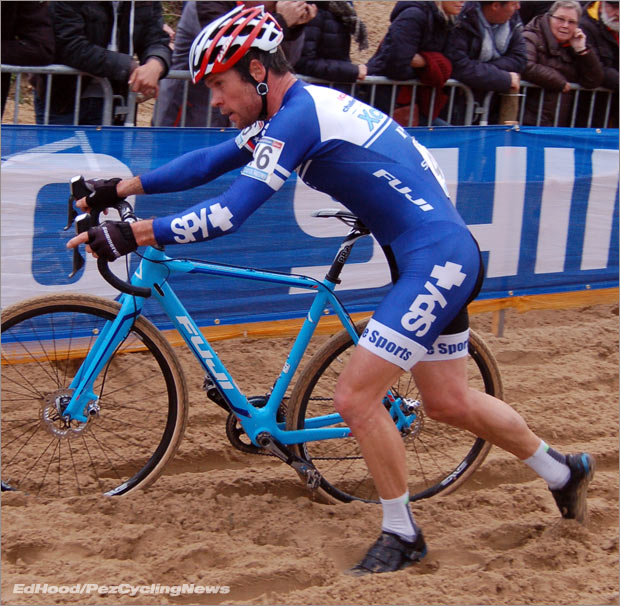 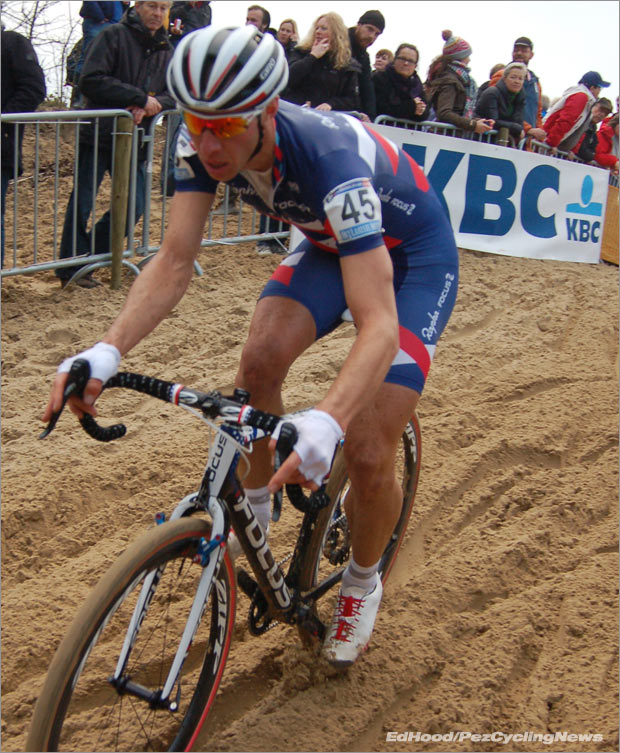 Jeremy Powers finished 17th; Ian Field 24th and Jonathan Page 38th. The sun shone, the frites were good, the pils cool and the racing tough – not much more you can ask for from a day at the ‘cross.

Time to head back to Gent; and maybe relax for an hour before we head up to the Kuipke for the big chase – we were late out of the Vivaldi last night …

A New Approach to Anti-Doping