Race Report: Pre race crashes, GC battles, first pyschological blows, shows of form and the odd surprise. The 2014 Vuelta started today in Jerez and it was the Movistar team of Nairo Quintana and Alejandro Valverde who impressed straightaway.

The Vuelta finally kicked off today with a short, fast & technical team time trial in Jerez. Besides being technical with its series of sharp corners and roundabouts today’s 12.6km course was also dead flat so high average speeds were expected with small timegaps.

A flat start to a very mountainous Vuelta

With the crucial first red leader’s jersey up for grabs as well as the chance of landing an early psychological blow amongst the GC contenders of Contador, Froome, Quintana, Evans and co. this was always going to be a hard fought stage.

The Contenders
On Friday many pundits were naming Trek Factory Racing as their favorite for the event with Fabian Cancellara leading a crack squad of time trial specialists that included Bob Jungels, Jesse Sergent and Kristoff Vanderwalle but they had a mass fall this morning in training on the course which could prove costly for their performance. Only Cancellara, their climber Arredondo and Fabio Felline did not fall so they were sure to be a bruised and battered team on the startline at their late start time of 19:52.

Other favorites like BMC, Orica-GreenEdge, Movistar and OPQS didn’t have such bad luck though and were raring to go but the honor of first team to start went to the first African team in a GrandTour in MTN-Qhubeka who started at 19:04. 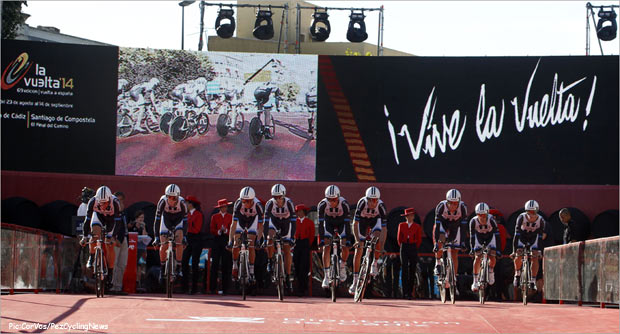 Team Giant-Shimano set off, eventually riding to 6th place on the day, just 16 seconds back.

The Race
MTN-Qhubeka admitted to PEZ earlier this week that they were just trying to get through the TTT without losing too much time and their finishing time of 14m42s looked like it would be good enough for that, holding up as the best time in the early going with neither Cofidis nor Europcar able to do better.

It took the arrival of Giant-Shimano to beat the Africans, finishing in 14m29s which looked to be a very good time on this short and fast circuit.

Orica-Greenedge were the next to take the provisional top place on the podium despite their team in Spain not being filled with their normal TT specialists like Luke Durbridge or Michael Hepburn to give them that bit extra. No matter though, they put in the best time but just like Giant-Shimano their time at the top didn’t last long with the surprising Cannondale team overtaking them by less than a second. 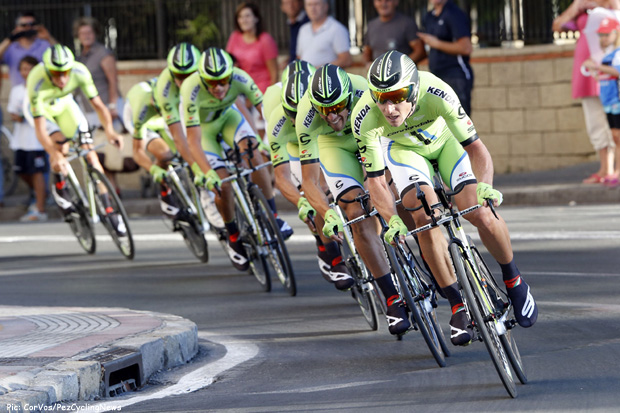 The GC Teams Hit The Road
Orica and Cannondale had both put in some good times but neither had a true GC favorite in their ranks, unlike some of the teams to come like BMC (Evans), Garmin (Talansky), OPQS (Uran), Tinkoff-Saxo (Contador), Katusha (Rodriguez), Sky (Froome) or Movistar (Quinatana) just to mention 7 favorites of this heavy GC hitters Vuelta. Who would take first blood?

The order of teams would show that it would be BMC who would try to beat Cannondale first but they came up short by 15 seconds as did the crash victims Trek who failed by just 3 seconds – was this morning’s crash the cause?

Back to the GC teams now with Lotto and the invisible Jurgen Van den Broeck finished 24 seconds down, Garmin 35 seconds down and Sky 21 seconds. It was now starting to look like Cannondale could bring the surprise of the day. 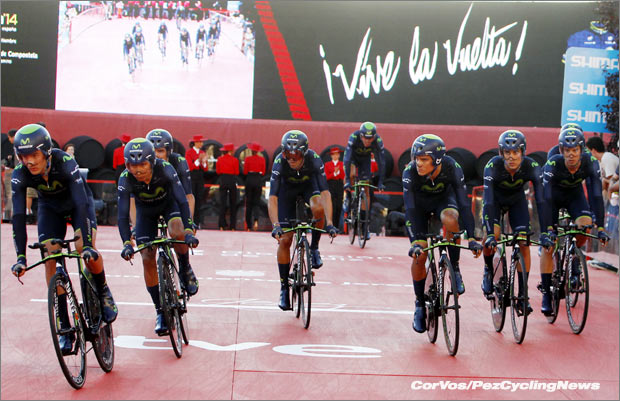 Three To Go
There were now just three teams left on the course to beat Cannondale, World Champion’s OPQS, Contador’s Tinkoff-Saxo team and Nairo Quintana’s Movistar. First in were the World Champs but their team in Spain wasn’t the same as their title winning machine and they failed by 5 seconds. It was then down to the GC boys Contador and Quintana but the latter was seemingly in trouble just trying to hang onto his teammates. Contador however was looking smoother but the combined pace just wasn’t there and they eventually came in 13 seconds down on Cannondale.

The Movistar GC duo of Valverde and Quintana were hoping to at least match Contador but the stage win looked out of their reach as at the time check they were 5 seconds down on Cannondale. No matter though, the Spanish sqaud simply flew over the second half of the course under the power of amongst others, TT specialists Adriani Malori & Jonathan Castroviejo. It was Castroviejo who led them over the line in what was to be the quickest time – 14m13 seconds for 12.6km. Yep, that’s quick. 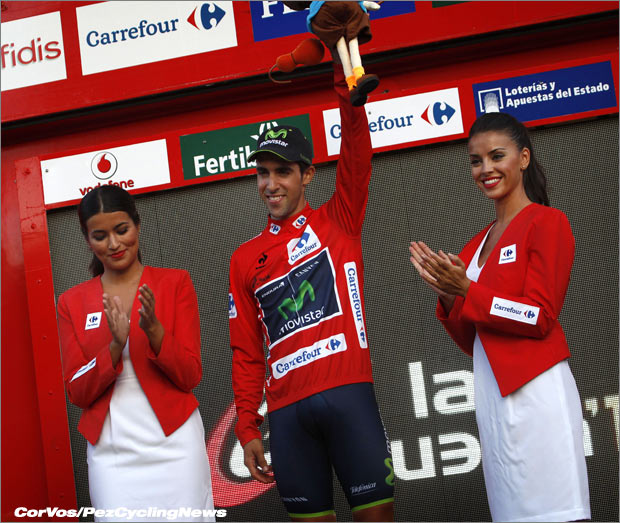 Jonathan Castroviejo takes the red jersey, Quintana and Valverde take the first blood in the race for the GC and all teams except for Europcar finshed within a minute of the victors. After this evening’s appetiser opening stage it’s on to a road stage of 175km tomorrow that should be a sprinter’s stage but as we know from past Vuelta history – anything can happen at La Vuelta. Keep it Pez.

Steven de Jongh presents – how will Tinkoff-Saxo take on the Vuelta?