Race Report: The third straight stage in the mountains at the Vuelta was billed as the most difficult and it lived up to its reputation with a hard fought race and GC battle. Riders were kicked out of the race for fighting, there were early attacks, a Froome fightback and a confident Contador – this stage had it all.

A Big Day
As the third of three big days in the mountains this one was billed as the hardest as there were climbs all day long – and although the stage was only 160km there were 4 Cat 1 climbs and 1 Cat 2 on the menu. 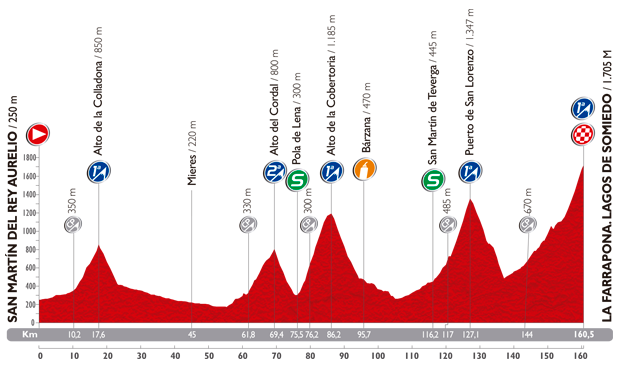 A Strange Start
With such an important day most were expecting the big guns to wait until the final climb of the La Farrapona so it was a massive surprise when just 20km into the stage the trio of Alberto Contador, Chris Froome and Alejandro Valverde found themselves forming a bizarre counter-attacking trio behind the day’s break over the summit of the Colladona.

This unlikely trio caused quite a scare back in the peloton as their lead approached 30 seconds before Katusha got on the front and brought the three amigos back to protect their leader Joaquim Rodriguez. The pace then eased off in the peloton somewhat and the group that got away before the trio of GC men’s little excursion began to build their lead.

The group consisted of Rohan Dennis (BMC), Laurens ten Dam (Belkin), Luis León Sánchez (Caja Rural-RGA Seguros), Peter Kennaugh (Sky), Ivan Rovny (Tinkoff-Saxo), Alessandro De Marchi (Cannondale), Romain Sicard (Europcar), Johan Le Bon (FDJ.fr), Wouter Poels (Omega Pharma-QuickStep), Gianluca Brambilla (Omega Pharma-QuickStep), Damiano Cunego (Lampre-Merida) and Peio Bilbao (Caja Rural-RGA Seguros). These thirteen built their lead out to more than 5 minutes before Katusha started getting involved in the chase and this upping of the pace saw the man in 6th overall on GC, Rigoberto Uran in trouble on the back of the peloton and he was soon dropped – with almost 100km still remaining. This was not going to be a good day for Uran. 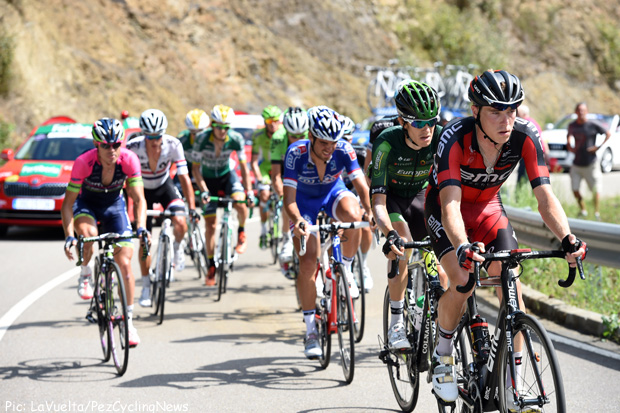 In Fighting In The Break
The combination of the Katusha chase and an uneven workload in the break led to some frayed nerves up front with Gianluca Brambilla and Ivan Rovny even coming to blows!

The group’s lead then dropped down to less than 4 minutes as they crested the Alto de la Cobertoria when from back in the pack Fabian Cancellara made an unexpected solo attack trying to cross the four minutes to the leaders alone. It was a massive ask to cross such a gap alone especially with the terrain still ahead of him but he was making up ground as the leaders continued their infighting.

There were no more blows involved but Laurens ten Dam and Peter Kennaugh were amongst those exchanging words with Romain Sicard seemingly not having many friends in the group either. With 38km remaining former stage winner Alessandro De Marchi jumped away from all this fighting to go on his own and he was quickly joined by the fighter, Gianluca Brambilla. This Italian pairing were then joined by Brambilla’s teammate Poels but they wouldn’t remain a trio for too long…

SKY Join The Chase & Controversy
After Katusha had done the chasing for most of the day it was now Sky who was in charge back in the peloton and the likes of Cancellara and the others from the original break were getting swept up with just the trio of Brambilla, De Marchi and Poels remaining out front with a 2m30s lead with 20km remaining.

At the 15km to go mark the commissaires now got into the action of the race by changing the leading trio to a leading duo by kicking Brambilla off the race for his earlier fighting with Rovny. Despite his gesturing and pleading there was no overturning their decision and he was out of the race. With Brambilla in the leading group and with the possibility of him featuring in the final result of the stage the commissaires didn’t want to make their decision after the stage so they made their move earlier than normal.

From dreams of a stage win to being sent home it was a tough day out for Brambilla with the only consolation being that the commissaires then dropped back to the peloton and also threw Rovny out of the race.

And Then There Were Two
With the riders now well and truly on to the final climb of the La Farrapona Sky were leading an infernal pace that was dramatically thinning down what was left of the peloton and cutting the De Marchi/Poels lead to just over a minute.

With 11.7km remaining De Marchi sensed that Poels wasnt strong enough to help him anymore so he attacked with all he had in a solo bid for glory and despite the incessant Sky pace he actually increased his lead to 1m30s. Sky were using up their whole team in the chase and by the time Mikel Nieve came to the front and increased the pace even more the ‘peloton’ was less than a handful of riders.

Attack!
With 4.5 km remaining and De Marchi still holding on to a 45s lead Chris Froome suddenly burst out of the slipstream of Nieve in a blistering attack and it was only Alberto Contador who could follow. Rodriguez and Valverde were next on the road with Fabio Aru another 50 metres back with the other riders stretched all over the mountain in ones and twos.

The Froome/Contador duo soon caught and dropped De Marchi and Aru caught the Rodriguez/Valverde duo before being dropped again as Froome continued to turn the pedals at an impressive speed, increasing their lead to more than 45 seconds with 1km remaining. 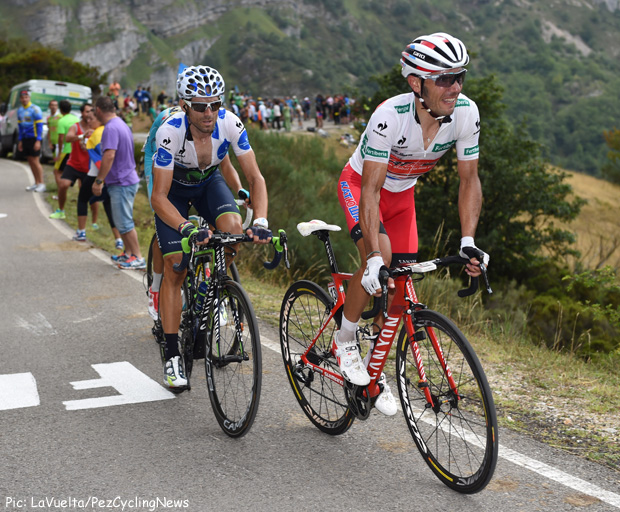 Under the red kite and the battle for stage honors and the crucial bonus seconds began and it was Alberto Contador who attacked first, sprinting on the pedals in his familiar standing up style with Froome left sitting, looking at his stem, unable to respond. In the end Contador managed to put 15 seconds into Froome in the closing 600m and grab the crucial 10 seconds win bonus with Froome taking 2nd and De Marchi hanging on for third – robbing 4th place finishing Valverde of any bonus seconds. 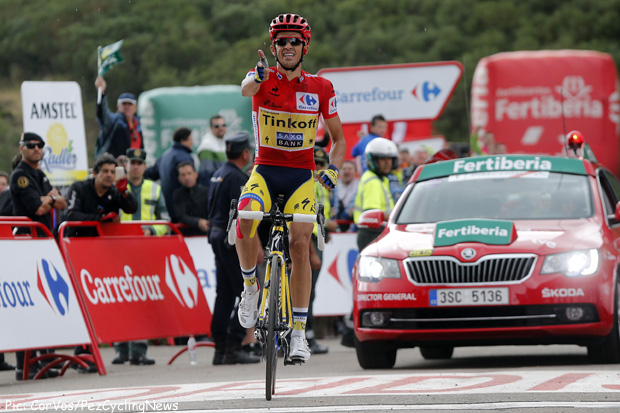 It was another great day’s racing in the Vuelta – but not if your names were Gianluca Brambilla & Ivan Rovny who will now both be heading home on tomorrow’s rest day.