Race report: In his what seems like 48th consecutive Grand Tour, Lotto-Belisol’s Aussie adventurer Adam Hansen cruised home to take a massive stage win in Cangas Do Morrazo. Fortune favors the brave, and Hansen took his chance brilliantly, attacking off the front on a small rise as previous escapee Alexey Lutsenko was swept up.

And, yes, this is Hansen’s tenth consecutive Grand Tour, and after a stage at last year’s Giro, the inventor still had the firepower to noodle away for a perfectly executed victory. A frustrated John Degenkolb and a lesser-spotted Pippo Pozzato rounded out the top three, with no significant overall changes ahead of tomorrow’s final mountain showdown.

The Early Action
It took 25kms for the break to establish itself today with FDJ.fr’s Laurent Mangel, Pim Ligthart for Lotto-Belisol and the Omega Pharma-QuickStep rider Wout Poels getting away away. Poels no doubt fancies his chances of a post-racing career as a boxing referee given that he was the guy keeping an eye on Brambilla and Rovny as they slugged it out in their ultra-ultra-gossamer weight world title bout on Monday. 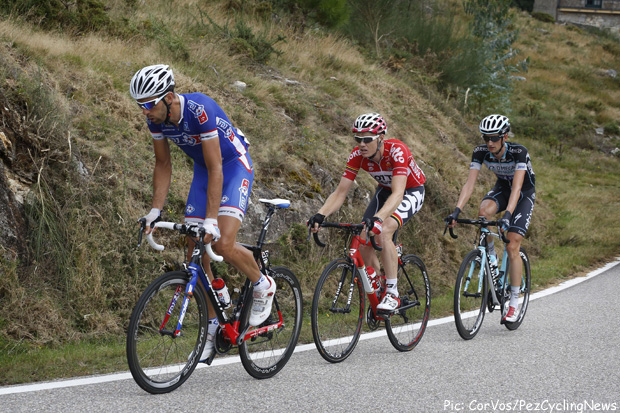 Poels led over the first of two second-category climbs, the Monte da Grova, but the peloton was not in a generous mood today. The lead never got up much beyond three-and-a-half minutes and with only three more shots, this one included, at a Grand Tour stage win in 2014, the main field was not for letting anyone out of sight. Orica-GreenEdge and Giant-Shimano did the bulk of the donkey work.

The gap just got remorselessly sliced, like a prime ham in a popular deli. 23kms from home, and the peloton was being dragged along by Saxo-Tinkoff’s Michael Valgren, with Sky and Movistar lurking with intent. Mangel was the first to throw in the towel, but Ligthart and Poels continued to torture themselves a little longer.

The launchpad onto the Alto Monte Faro, the last second-category climb, was a shocking right-hander that brought some riders to a standstill and offered 4.7kms at 7% of an average gradient.

Astana’s Alexey Lutsenko was the first to attack with Sky ramping the speed up in the peloton through Pete Kennaugh. Four Sky riders sat in a line, with Giant-Shimano stage-winning machine Degenkolb glued to Froome’s back wheel and Contador ballroom-dancing on the pedals just behind him.

With 17 clicks left, Guillaume Levarlet was off and chasing Lutsenko, but made practically zero progress before being swept up again.

The Kazakh got over the top alone and hurtled down the descent, before Sammy Sanchez (BMC Racing Team) took it on at over 50 miles per hour.

The cameras picked up a Sky rider lying on the deck, flat on his back, not looking good. Dario Cataldo had got a corner wrong, losing the back wheel and careening off the road. Hovering a couple of lengths off him, Alberto Contador was able to avoid the faller. On such incidents do races turn.

Sanchez cornered like a Moto GP demon, gradually closing up on Lutsenko, but didn’t manage to get out of sight of the peloton and was caught with 11kms left.

Lutsenko took a fourteen-second lead under the ten kilometers to go banner, but Giant-Shimano had the giant Tobias Ludvigsson doing the work to close up on the Kazakh escapee. It was a brave battle, but the lead was only eight seconds with eight kilometers to go.

Ludvigsson knocked off his effort and the pace immediately slowed as Tinkoff-Saxo didn’t want the risk of the ‘wrong rider’ nicking a time bonus on the line.

Only 5.3 kms remained when Lutsenko finally ran out of gas on a nasty little bump. Pete Kennaugh kept the pace right up, but Degenkolb had hung on. Five kilometers left, and Lotto-Belisol’s Adam Hansen had a go as the road teasingly sloped upward.

Four kilometers left was the signal for last Friday’s stage winner Dani Navarro to counter-attack, trying to reach Hansen, but it was short-lived as Giant-Shimano closed it up again.

Two to go for Hansen, who just kept whipping the pedals around and he had doubled his lead to 14 seconds as he went through two kilometers to race.

The Aussie rocketed under the red kite with 12 seconds in his pocket. The peloton was all over the road as riders tried and failed to take control, but Hansen was gone. A couple of sneaky glances under the arm, an attempt to zip up his skinsuit, a peace sign flashed and over the line for the stage win. 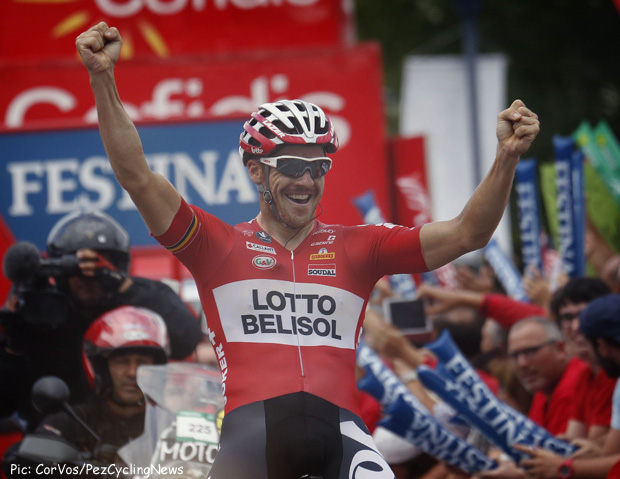 It will be a hugely popular win, especially for those who love to see an old-style battler getting his just rewards.

Contador, Froome, Valverde and Rodriguez all kept their powder dry ahead of tomorrow’s beastly stage to the final summit finish at Puerto de Ancares, so we await the fireworks to come.