Race Report: In a fast and furious finish, as the riders sped through La Isla San Fernando, it was the team of FDJ who played their hand to perfection and set up Nacer Bouhanni for the win. He finished it off in style and even had time to look over his shoulder and show his rivals who was boss.

Towards the Costa De La Luz
It’s August, it’s the southwest of Spain, and it’s blowing Levante…the warm wind that blows across from the Sahara to the Gulf of Cádiz and turns a hot day to an unbearable one as the riders tackle the 175km from Algeciras to San Fernando in 35-degree heat.

After the hot and humid TTT yesterday in Jerez the riders headed onto their first road stage of the 2014 Vuelta a España and the organizers had been relatively kind. It may be a longish route but with only the 3rd Category ascent of Alto del Cabrito (little mountain goat) coming shortly after they climb away from the port city of Algeciras to contend with it was a day that would favor a long breakaway. To begin with…

With the long straight roads coming after the small climb to the beautiful hilltop town of Vejer it was unlikely that a break would be able to stay away. As the race headed back over from El Puerto de Santa Maria and crossed the Puente Juan Carranza, with the beautiful old city of Cádiz to the right, the riders entered the long peninsula road leading to San Fernando…10km of straightaways meaning that any surviving breakaways would struggle to remain clear.

Here’s how today’s stage played out:

As the riders neared the top of the climb Haas and Sbaragli decided to fight out the prime with the victory going to the Garmin Sharp man and giving his squad at least one day in the Climbers’ Jersey. Job done, the two riders fell back to the peloton and left the other four to continue alone. They built a lead which hovered between 3:30 and 4 minutes as the Movistar-led bunch kept a watchful eye.

With so many riders close to the top of the overall, and a romp to the finish expected, Movistar may well opt to let the leader’s jersey pass to someone else and thereby relinquish the responsibility to cover the gaps. 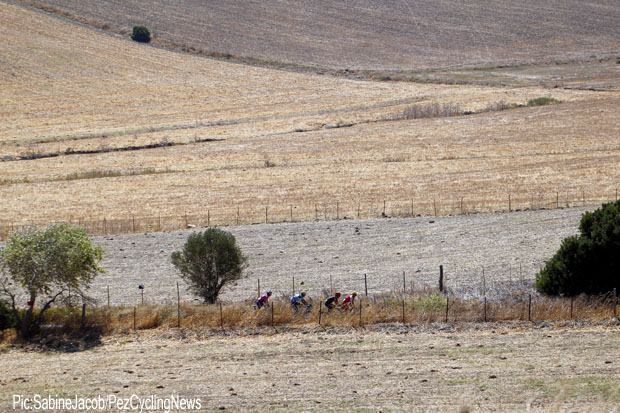 The break pushed on through the heat

Rolling Along
Into the third hour of racing and with the average speed a relatively relaxed 42kph the gap had now risen to just short of 5 minutes. The bunch was in no hurry, confident that when the racing finally started they would be able to bring the break under control quite quickly. Reports from Cádiz said that the wind had risen slightly but would be a tail or crosswind along the final 10km stretch with the beach on one side of the peninsula and the bay on the other.

With the bunch taking it easy, the break had taken the short climb to Vejer and come back down to the coast and the first intermediate sprint at Conil. Janse van Rensburg led through with Conti in second and Aramendia in third spot. As the riders headed off towards the next sprint rendezvous at Puerto Real, and a circumnavigation of the Bahía de Cádiz, the bunch was gently beginning the reeling-in process. 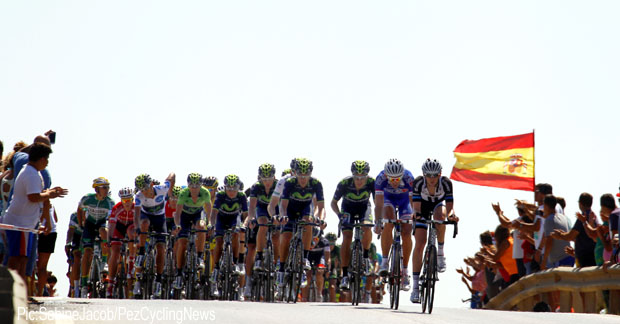 The peloton pulled the break in…slowly

FDJ and Giant-Shimano had come to the front and were now contributing to the pace, which had been set by Movistar. With Nacer Bouhanni (FDJ) and John Degenkolb (Giant-Shimano) being good bets for the expected sprint finish the gap was now down to 3:14. They just had to judge when they wanted to make the catch so that others were not encouraged to try and make individual bids for glory.

Hotting Up
With the bunch moving faster we had our first crash of this year’s Vuelta. It was nothing major with Jens Debusschere (Lotto Belisol), Merhawi Kudus (MTN-Qhubeka) and Fabio Felline (Trek Factory Racing) all hitting the ground. Felline was slow to remount but was soon on his way again.

Ahead in the break they had reached the second sprint at Puerto Real and this time it was Conti who took it from Hardy. With the bunch passing through the same point shortly afterwards the gap was evaporating and now stood at just 1:36.

The leaders were beginning to tire and more and more teams were taking up positions at the front of the bunch. With five 90-degree turns in the last 3km, and three of those in the last kilometer, everyone was keen to stay out of trouble. The teams were also concerned that someone might try to force a split on the long run along the peninsula where crosswinds could come into play. Sky had moved up as had Tinkoff-Saxo. 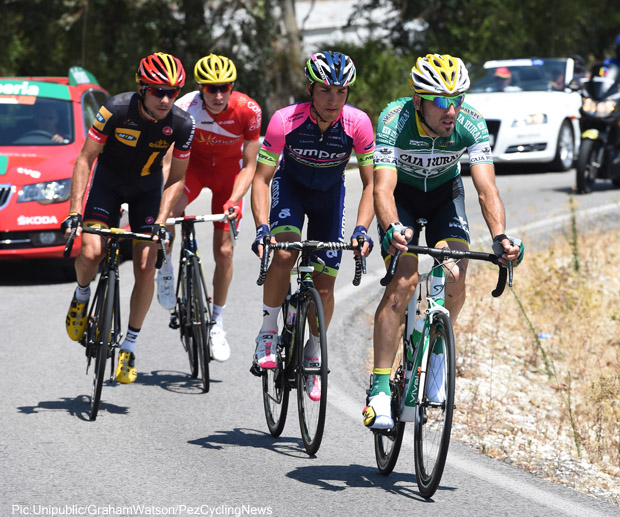 The break was never going to succeed

Into El Puerto de Santa María and the bunch now had the leaders in sight. They were just ahead and on the long straight avenues they were just 20 seconds up the road as the bunch eased back and sorted itself out, knowing they could take them whenever they needed. With 20km still to race the bunch had spread out across the road and the leaders were unsure whether to stay out in front or call it a day.

Going to Plan for the Sprinters
With 17km to the finish, and the riders re-entered Puerto Real and headed for the bridge across the bay, the last of the break was caught and it was all back together. Now we only had the crossing and then 10km of pan-flat roads to go before the final 3km run-in to the finish.

The overall teams were being very attentive with Tinkoff-Saxo, Sky, Katusha and BMC all moving to the front. The sprinter’s teams were taking on the GC teams as everyone feared a split over the bridge, past the Cortadura and onto the peninsula road to La Isla San Fernando. Pete Kennaugh (Sky) was on the front in his British Champion’s jersey as the bunch sped towards the slight left turn at Torre Gorda (Fat Tower). The other Peter, Sagan (Cannondale) this time, was also showing close to the front and the Slovakian rider was keen to get that major stage win.

With the salinas on either side of the wide road, everyone was getting organized before hitting the roundabout at the entrance into San Fernando and the smaller roads that would follow. There was almost a split in the peloton as they headed up to the first right hand turn with the GC team riders leaving it to the sprinters now that the risk of crosswinds was gone.

Perfect Finish
With all of the sprint teams trying to find the ideal position as they took first the left hander and then the two rights it was the FDJ team of Nacer Bouhanni who found themselves in the perfect spot…right on the front with 200m to go. As the lead-out men peeled off one by one it came down to Bouhanni and he gave it everything for the line.

It almost looked as if he’d gone too soon with the big galloping style of John Degenkolb chasing him down but Bouhanni fired again and had more than enough time to sit up and look over his right shoulder as he crossed the line. Degenkolb got second from Roberto Ferrari of Lampre-Merida with rest of the fast men in close attendance. 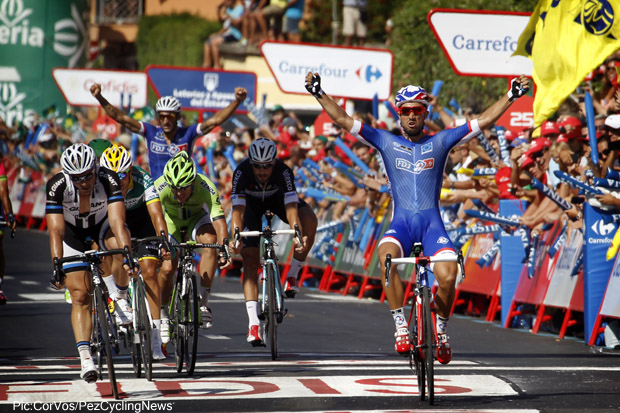 There may not be many stages in this year’s race that are pure sprinter stages, but first blood to FDJ who rode the final two kilometers to perfection. This win gives Bouhanni the points jersey but the Red Jersey of leader now passes to Alejandro Valverde (Movistar) with his joint team-leader Nairo Quintana sitting in second. 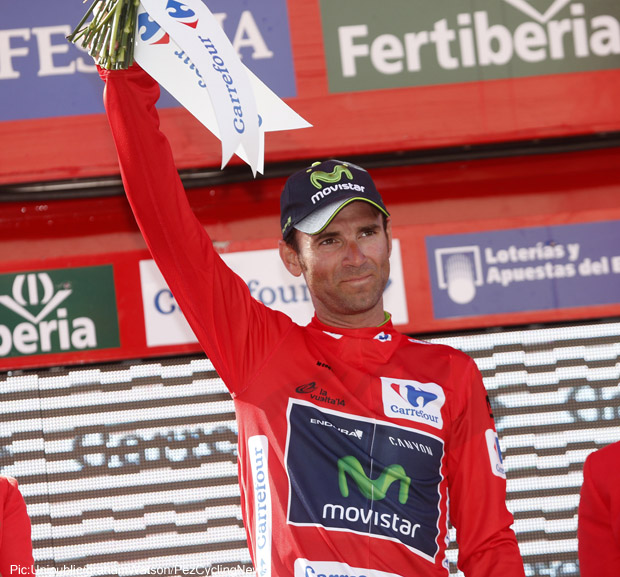 We now look forward to tomorrow’s stage as the riders roll off the aircraft carrier ‘Juan Carlos 1’ in the harbor of Cádiz, out through the old town and off towards the famed White Villages of Andalucía on their way to Arcos.