Race Report: The last road stage of the Vuelta was billed as one of the hardest and with the GC on the line it was always going to be a tough day. Alberto Contador proved to be the toughest of all though as he conquered the brutal Puerto de Ancares climb taking the stage and with it seemingly wrapping up the 2014 Vuelta.

This is the big one, the one we’d all been waiting for – the final mountain stage to Puerto de Ancares. After an entertaining Vuelta these last three weeks where we’ve seen great, tight racing and surprisingly small time gaps the final podium places were predicted to be cemented today as most pundits don’t believe that tomorrow’s 9.7km time trial is simply not long enough to make the difference.

Today’s Stage 20 however is completely different – it’s long enough and hard enough to turn the GC completely upside down. 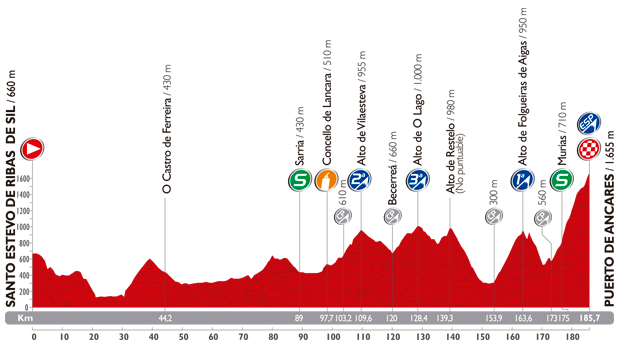 Four categorized climbs were on the menu but with numerous leg-sapping uncategorized climbs in between making for one gnarly day of riding – not to mention the summit finish on Puerto de Ancares with its 13km at 1665m altitude and very difficult percentages – this is where the whole race could change. 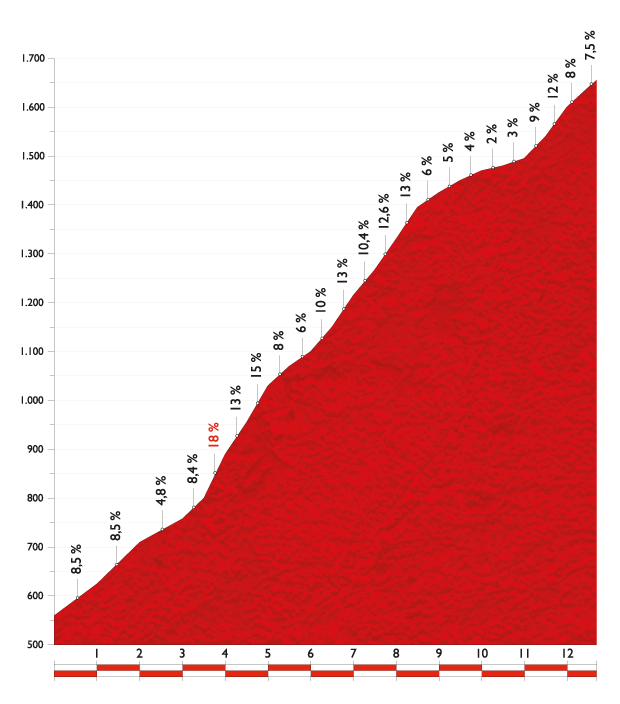 Ouch! After three weeks of racing – or even just 3 minutes of racing that has got to hurt

How It Started
Being the last road stage of the race, there was a real battle to get into the break today with many trying their luck but eventually it was the familiar names of Przemyslaw Niemiec (Lampre-Merida), Wout Poels (Omega Pharma-QuickStep), Jerome Coppel (Cofidis) joined by Europcar’s Maxime Mederel who made the successful move. 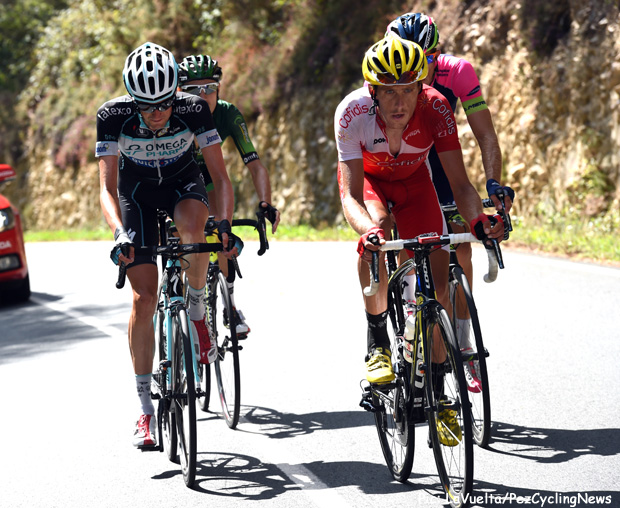 These four worked in perfect cohesion and the bunch seemed happy enough with the composition of the group and their lead was quickly out to more than 4m30s after 50km of racing. After 100km the lead then grew to more than 10 minutes which was the cue for Team Sky to get on the front and bring things back into line. If Chris Froome was somehow going to make up the 1m20s he needed to take the red jersey then the stage win bonus could be crucial so he wanted to be battling for the win on the final climb and needed the break brought back.

The Sky chase was doing the job bringing the gap down but the four still had 7 minutes with 75km remaining – had Sky left it too late?

A Combined Chase
Astana now combined with Sky in their efforts to bring it all back together as the boys in blue were thinking about their young leader Aru and perhaps a third stage win? Or even an attack on Joaquim Rodriguez’ 4th place on GC as at the start of the day Aru was in 5th, 46s down on Rodriguez and 3m15s down on Contador.

The combined power of the two big budget squads was having its affect on the lead but despite their efforts the four escapees continued to push hard and with 50km remaining they still had a lead of 5m30s. With 30km remaining and with Sky turning up the tempo even more the gap had dropped with the break’s advantage over the thinning peloton down to three minutes but the break also was down to just three riders as Poels couldn’t continue at the frenetic pace needed to hold off the peloton and had to sit up.

The Final Catch
With 25km remaining the gap was now rapidly approaching the dreaded one minute mark and it was at this point that the breakaway started attacking each other with Méderel the first to try his luck. It went nowhere though and he was soon dropped as Niemic attacked with only Coppel able to follow. The writing was on the wall for these two though as despite a valiant effort out the front on a very trying parcours this race was coming back together for the final climb and the battle royale of the Vuelta.

The Puerto de Ancares
Niemic and Coppel hit the climb first but their lead was only 30 seconds and the real race was happening just behind them with Tinkoff-Saxo, Sky, Astana and Katusha all jostling for the best position for their team leaders. Sky through Philip Deignan were setting an incredible pace and the peloton was losing members out the back door at a rapid rate – including Sammy Sanchez (BMC) who started the stage in 7th on GC. Could he be losing a top 10 on GC here in the final 10km of the stage?

Meanwhile up front and under the 10km to go banner it was game over for the break and the race was now on in a big way for the crucial bonus seconds, the stage win and more between Froome, Contador and co.

It was still Deignan doing the work in this ever so select front group when Joaquim Rodriguez attacked and quickly gained an advantage. The front group was down to just Aru, Froome, Hernandez, Caruso, Contador, Deignan, Barguil and Valverde left and nobody seemed willing or able to bring back Purito’s attack. Eventually the man with the podium spot under threat, Alejandro Valverde chased after Purito and he was briefly followed by Barguil but Valverde could not bring back Rodriguez who had built up a lead of more than 20 seconds. Valverde was recaught by the others and Rodriguez continued to gain time when at 6km remaining Chris Froome made his move.

Valverde was able to follow as was Contador and it was now 1st, 2nd and 3rd on GC chasing down the 4th placed Rodriguez with Aru and the others seemingly out of contention for the stage. Valverde quickly cracked under Froome’s intense pace though and it was then just Froome and Contador chasing but it was Froome who was doing all the work. Less than a kilometer later this duo had caught and dropped Rodriguez and it was now down to the man on man, Froome vs Contador battle that we’d all been waiting for.

Froome with his traditional sitting down, stem gazing style and Contador dancing on the pedals and looking seemingly at ease as they continued to put time into all their other rivals. Froome tried a couple of accelerations to get rid of Contador but Bert looked like he was in control at all times and with just on 500m to go he burst out of Froome’s slipstream and scooted away for the stage win in an almost direct replay of the finish of Stage 16. By the line he’d extended the gap to 16s and with the time bonus for the win he now leads the Vuelta by 1m37s over Froome with less than 10km remaining. 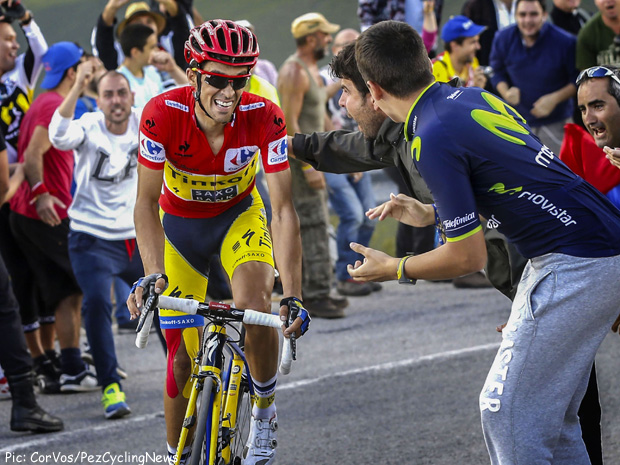 It was a valiant try by Froome but he was beaten by a better rider on the day and will be happy to have increased his lead over 3rd placed Valverde ahead of tomorrow’s time trial. 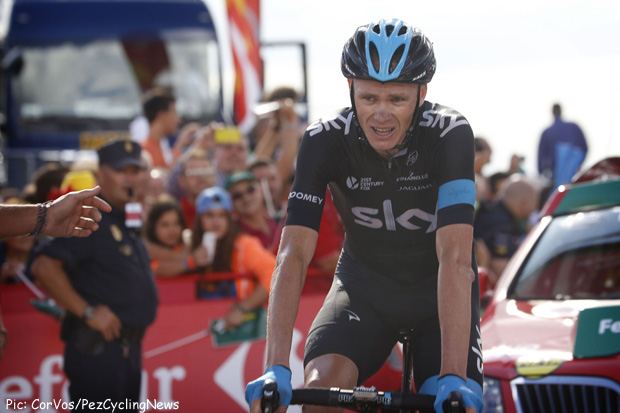 Further down the Top 10 Sammy Sanchez who was one of the first to get dropped actually paced himself superbly up the climb, finishing 8th on the stage and climbing to 6th on GC at the expense of Dan Martin who dropped to 7th.

There’s still a lot to play for in tomorrow’s time trial and although Contador looks to have a lock on the red jersey there are a number of other places in the Top 10 that could change.