Race Report: A thrilling stage in the mountains saw Ryder Hesjedal power to victory in the closing meters of the brutally steep climb to la Camponera just minutes ahead of the GC battle where attacks from Contador, Froome and more completely changed the look of the Top 10 on GC. It was another day of hot action at the Vuelta!

Today’s 200km stage is the first of a trio of mountain stages with summit finishes and although easier than tomorrow’s run to Lagos de Covadonga and Monday’s stage the terrain on offer and the tight GC battle at this year’s race was sure to provide for some interesting racing. 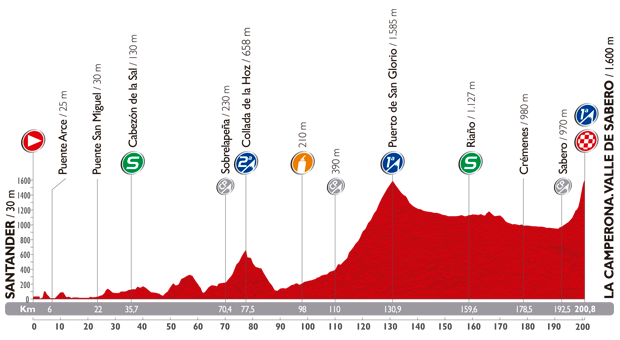 One look at the roadbook and it appeared that a breakaway would have a good chance so as a consequence everyone wanted to be in it. When it finally did get away it was a big, high horsepower group that included the likes of Adam Hansen (Lotto-Belisol), LL Sanchez (Caja-Rural), Oliver Zaugg (Tinkoff-Saxo), Ryder Hesjedal (Garmin-Sharp) and Romain Sicard (Europcar) amongst others although race radio was a bit haphazard with their info the break was big at more than 20 riders and determined to make it to the finish ahead of the peloton.

Despite the obvious power in the break for a long time it looked like the peloton would actualy bring them back before the finish as OPQS in particular did a lot of work trying to set up their man Rigoberto Uran for the stage win and bonus seconds that go with it. No other teams were really helping out though and the OmegaPharma boys eventually gave up meaning that the break’s lead went out again and it was time to start looking at the riders in the break to see who could win.

The Final Climb
The stage had now come down to two races in one to be played out on the double digit percentages of the final, almost 9km long climb to La Camponera. The first battle was for the stage win between the remaining breakaway riders and the second battle was amongst the GC contenders for the red jersey. Both battles were proving hard to predict with many possibilities as to how the race could pan out.

Throughout the day there were a couple of riders that had been soft pedalling in the break as they were in the move to work for their captains in the peloton, namely Oliver Zaugg (Tinkoff-Saxo) and Alexandr Kolobnev (Katusha) but these two were up against some good climbers like Hesjedal (Garmin-Sharp), Romain Sicard (Europcar), Erviti (Movistar), young Louis Meintjes from MTN-Qhubeka and Bart De Clercq (Lotto-Belisol). Adam Hansen made no secret of the fact that he thought his man De Clercq could take the stage so he went to the front on the lower slopes to do the work but soon dropped off and by the halfway point of the climb there were just 7 riders left in contention. There was a few turns of pace from Sicard and Meintjes on the steep section but it was Zaugg who forced the gap riding away solo and on to what looked like a great win with just 2km to go.

Meanwhile back amongst the GC favorites who were climbing the same wall 4 minutes behind, it was Chris Froome who was dropped early on as Alejandro Valverde ground out the pace. Froome stated before the stage that he was going to climb like a time trial and go at his pace, not worrying about the other’s attacks but early on it looked like this strategy would be costly. 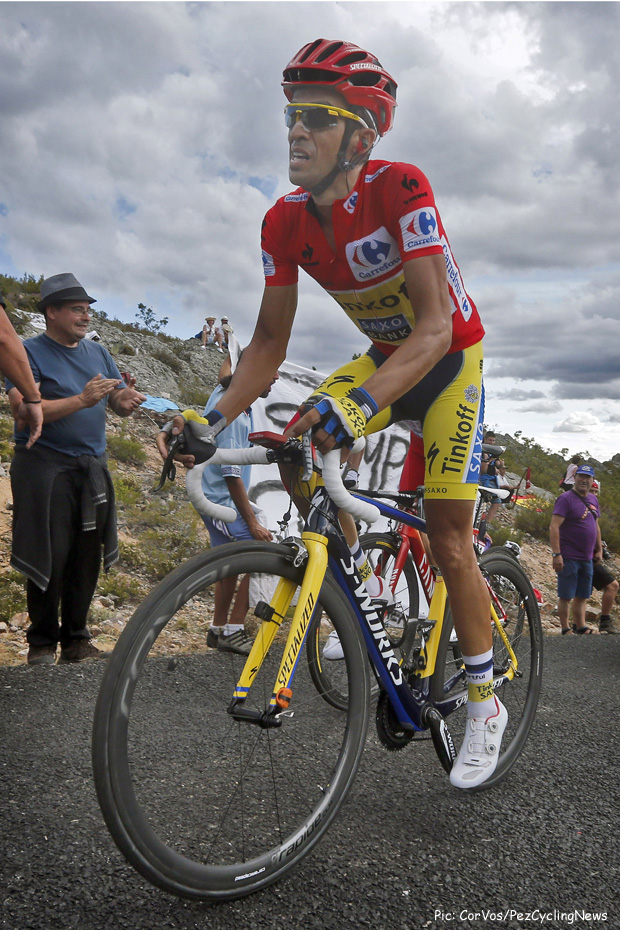 Halfway up the climb it was Contador who then attacked, dropping everyone at one stage before Joaquim Rodriguez and Fabio Aru managed to fight their way back on but Valverde was dropped for good and he started looking behind him for help.

Back to the front of the race though and to someone that should have been looking behind him was Oliver Zaugg who had been looking like he was riding to his best win since the 2011 Giro di Lombardia when from out behind the camera motorbike sprung Ryder Hesjedal who had fought his way back up to the Swiss rider. Hesjedal managed to surprise Zaugg with an impressive display of speed on this tough hill to move into the lead on the road with less than 100 metres to go to take an amazing stage win and shatter the dreams of Zaugg. 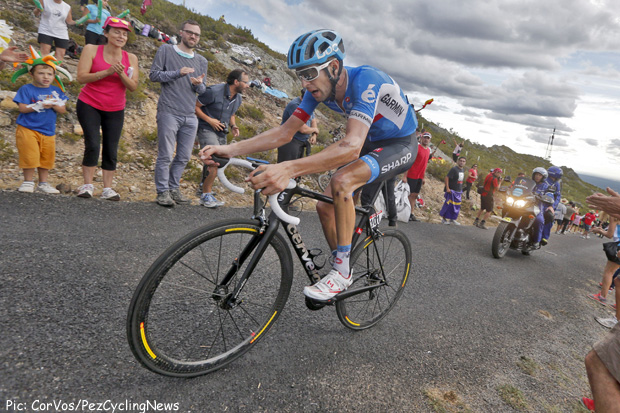 Battle For The Red
With Hesjedal wrapping up the stage the attention now went back to the GC battle where Chris Froome had produced a Hesjedal miracle of his own powering back from his early troubles to not only reach Contador and co. but to then go to the front and attack! His efforts saw Aru dropped and put both Contador and Rodriguez in trouble with the latter fighting back well though in the closing stages. 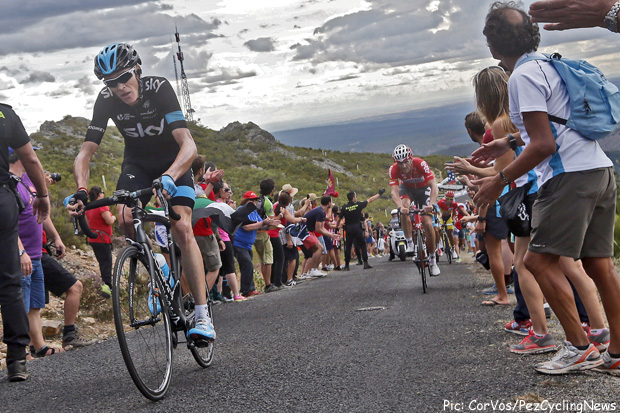 Coming to the line Froome continued his traditional looking at the stem form and high cadence as Rodriguez almost got back on terms and Contador lost a few seconds with Valverde losing many more. Before the stage started there were 6 riders within 2 minutes of the red jersey but this one final climb has managed to change that signifcantly. Chris Froome’s comeback saw him move up to 3rd whilst the likes of Valverde and Uran dropped down.

The day belonged to Ryder Hesjedal though with a well deserved, hard fought victory that should silence the ‘motor doping’ critics – or could even enhance them such was his speed in the closing stages. I’m sure the UCI inspectors will be checking his bike after the stage though to stop such rumors once and for all.

Keep it Pez for much more action on Sunday and Monday with two brutal stages to come before the 2nd rest day.