Race report: It’s not often you get to take your best ever win in front of a home crowd, in your home Grand Tour … in front of riders of the calibre of Alberto Contador and Chris Froome. Today Cofidis man Dani Navaro did just that, with a scintillating late attack to solo home in the Parque de Cabárceno.

It was another fascinating day with the main contenders having to go a little deeper than they would have liked as the finish was much harder in reality than the road book suggested.

Navarro took advantage of a momentary lull in hostilities to zoom clear inside the last couple of kilometers. Churning the biggest gear he could manage, he hung on by two seconds over Dani Moreno and Wilco Kelderman.

How it went down
Yesterday was, admittedly, a pretty high-speed day off, whizzing around Logroño, but today had a bit of a tougher profile. Flattish for the first half, and then two third-category climbs, a second-category hill and a nasty sting in the tail with some ferocious ramps on the run-in. 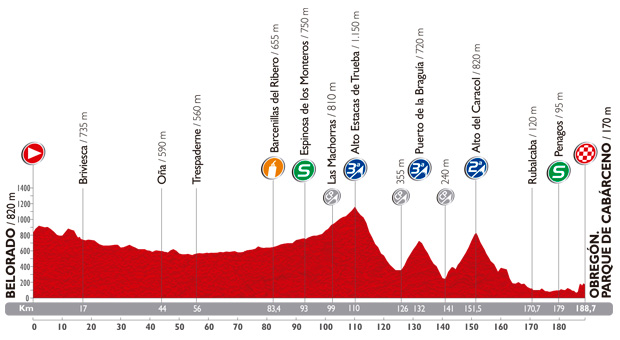 Today’s leg shouldn’t really have been suitable for the pure sprinters, it looked too straightforward for the GC guys … for this stage, the graffiti artists had been spray-painting ‘breakaway’ all over it since the route was announced.

Yaroslav Popovych from Trek, Marcel Aregger of IAM Cycling and Garmin-Sharp’s Johan Van Summeren ditched from the early break leaving a healthy-looking 11-man escape to do the day’s dirty work. 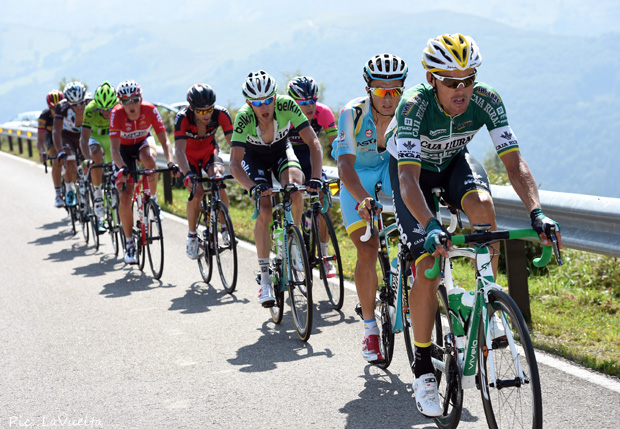 Movistar abdicated responsibility for the chase early and those poor saps at Europcar were put to work to lead the chase. Orica-GreenEdge came forward and helped to stabilise the gap before it stretched too far beyond the three minutes the escape had around the feedzone.

LL Sanchez was first over the Estacas de Trueba, and the break was still together, working nicely and holding 2’45” on the peloton, and he repeated the trick on the Puerto de la Braguia.

Orica-GreenEdge lifted the tempo on the day’s last categorised climb, the Alto del Caracol, while the breakaway was cleaved in half. Cunego, Sanchez, Lutsenko, Gaudin and Wyss stayed clear, while everyone else went backwards. Ever the showman, Peter Sagan got dropped the most spectacularly, simply disappearing through the bunch and out the back.

The Kazakh Lutsenko set a fiery pace on an already quick day and saw the break over the top with two minutes on the main field. It was beautiful Cantabrian countryside that the riders swept through, lush green valleys, tree-lined roads, a completely different landscape compared to the sun-blasted south of week one.

With 30 kilometers to go, the break was still working hard but saw their lead start to erode under an Orica-GreenEdge assault.

Within the next few kilometers, Orica got hacked off, and removed their feet from the collective accelerator, leaving the pace-setting to Tinkoff-Saxo and then FDJ. The break eeked out another 30 seconds or so, and saw the lead tiptoe back beyond the two-minute warning.

FDJ sliced away, surprisingly setting up Nacer Bouhanni, removing more and more seconds from the break which gradually disintegrated until Lutsenko set off on his own.

He was picked up by a Sky-led peloton with only 7 kilometers to speed through, then Tinkoff-Saxo hit the front.

Gianluca Brambilla for Omega Pharma-QuickStep, with 2.1kms left, attacked and then Dani Navarro for Cofidis hauled himself up the fearsome 14% ramp.

Dan Martin then tried to go, with all the main contenders locked on before Froome flew clear. It all came back together for the favorites but Navarro was gone for his biggest ever win.

The Spaniard continued smashing a big gear round, took the red kite, looked over his shoulder and set his sights on the line. It was grimaces of agony for Navarro who hung on, just ahead of Dani Moreno (Katusha) and Belkin’s Wilco Kelderman. 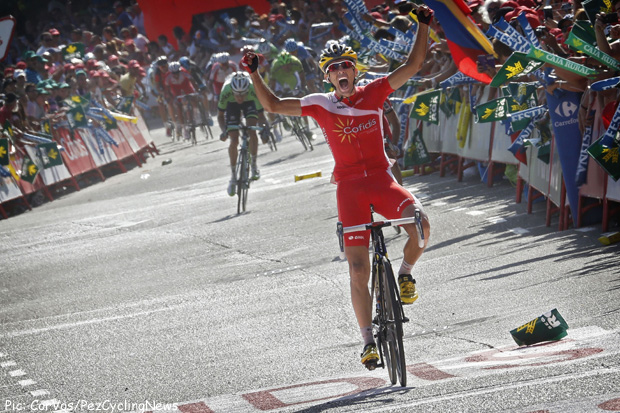 The field was just smashed across the final short slope, but all the main contenders could have been covered by a blanket. Very impressive ride from Nacer Bouhanni in fifth on such a tough finish but a big congratulations to Dani Navarro! 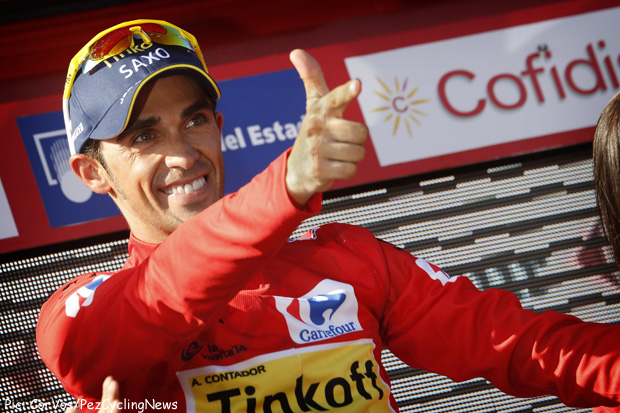 Keep it Pez for all the reactions and PeloPics to come.

Birthday boy Chris Anker is Ready for Climbs and Cake