Race Report: With the Australians sticking to their game-plan, and controlling the race throughout, the one thing they hadn’t considered was a well-timed attack from the Norwegian powerhouse Sven Erik Bystrom. He timed his uphill attack to perfection and flew down to Ponferrada to take the best win of his young career. The soon to be Katusha man led Norway to the highest step on the podium with a total of 3 Norwegians in the Top 5.

Shop Window
The Under 23 Worlds Road Race is a showcase for young cyclists looking to break into the pro’ ranks and if they haven’t already been signed for next year this is the place to shine and be noticed by team managers. It’s always been this way for the European teams and countries like Belgium, Holland, Italy and France pay very careful attention to this race.

Held over an 18km circuit based on Ponferrada near León in the northwest of Spain the U23 riders would tackle ten laps of the course. The profile saw the riders take on two climbs each time around: a long drawn out ascent of the Confederación with a short, sharp descent and then straight into a steeper climb towards Mirador followed by a longer rundown back into Ponferrada.

The 162 riders that lined up at the start were faced with good weather (unlike the forecast for the weekend); sunny and light, but cross winds and it wasn’t long before the first attack. After a couple of flurries with riders trying to get away and then being pulled back, eventually three riders went clear. They were Roman Kustadinchev (Russia), Adil Barbari (Algeria) and Sebastian Schonberger (Austria); they were working smoothly and by the time they started the third lap they had built a lead of 1 minute but behind, the peloton was taking it easy having been given the all-clear to take on food.

Now that they had the measure of the circuit and the relative speed of the break, the peloton eased up and the gap slowly rose through the 2-minute mark.

Watchful Eye
The gap now oscillated between 2:20 and 1:55 for the next couple of laps with the breakaway continuing to work smoothly. The peloton was pretty disinterested in chasing them down at this stage but the Australian team was not showing any complacency and was always at the head of the bunch.

Halfway through the third lap and the Australian team pulled back from the head of the bunch letting the Italians and the Dutch take their place. By the time they came across the finish line with six laps to go the three leaders had a gap of 3:20 and the average speed in the bunch had dropped below the 40kph average. The leading trio was now looking a little less sharp but the bunch looked like it was out for an easy Sunday run. With more teams beginning to show it wouldn’t be long before someone tried to put a plan into action.

A Cunning Plan
First to show was the Polish team as they put all five of their riders on the front of the bunch and then attacked just before the feed station. They took riders from Holland, France and Norway with them but when a rider from Belgium also got across the alarm bells began to ring and the German team quickly neutralized the attack.

It was just the first flurry though as another counter-attack tried to get away with Holland trying again, this time with Colombia in attendance.

Up with the leaders and Schonberger and Kustadinchev had ridden away from the Algerian Barbari who was now struggling. It wasn’t long before he was picked up by the bunch, which had reduced the deficit to 2:20. Big surprise as news came through that pre-race favorite, Caleb Ewan (Australia) had been dropped on the climb and was now chasing with teammate Jack Haig, a minute down on the bunch as they came through the finish line with five laps and 91km still to race.

Sacrificial Lamb
Mike Teunissen of Holland now went off the front of the bunch and looked for a reaction from the other teams. He was ‘sussing out who would come with him but with nobody taking the bait, and a lead over the rest of only 10 seconds, he decided to sit up and rejoin the bunch.

Next to go was the entire Chilean team in the shape of their only rider Jose Luis Rodríguez (Olivares had already abandoned). The Belgians quickly clocked who was attacking and decided it wasn’t worth chasing the Chilean who headed down the descent 20 seconds to the good. The road was sweeping left and right as it snaked down to the bridge and the speeds were high. Easy in dry conditions but the Elite riders could have problems if the weather turns this weekend as it’s expected to.

The Australians were now back on the front of the bunch with the entire team. The reported dropping of Ewan must have been down to a mechanical issue but his teammate Haig did an excellent job of pacing the sprinter back to the bunch and the Australians were signaling to the rest of the peloton that they were back in control.

Serious Move
A group now formed up and took off in search of taking the race. It contained Ruben Zepuntke (Germany), Tilegen Maidos (Kazakstan) and Lennard Hofstede (Holland). They eventually picked up the two leaders with the Chilean having been swept away. They were being chased by Pierre-Roger Latour of France and Willem Smit of South Africa but with the peloton closing in, led by the Australians, Smit eventually sat up.

As riders came and went on the climbs we eventually ended up with four at the front being chased by two and then the bunch. The original duo of Schonberger and Kustadinchev had been joined by Zepuntke and Hofstade with Latour and Maidos chasing. The gap to the bunch was 1:10 but the chasers were hoping to make contact with the leaders next time up the climb as they were only 6 seconds back with the Frenchman doing all the work.

Up past the castle and then there were six as the two chasers had made contact but the bunch was riding now and was only 46 seconds back. The Australian team was pulling and the break had sensed that they were coming and had turned off the gas in a bid to try something else. The peloton was still enormous so fireworks were expected in the closing stages.

Determined Attack
MTN-Qhubeka Professional Louis Meintjes, fresh from finishing La Vuelta, now made his move and quickly crossed the gap to the leaders and rode right on by. Other riders were bridging the gap to the break but Meintjes was going for the win and had opened a gap of 45 seconds over the chasers. 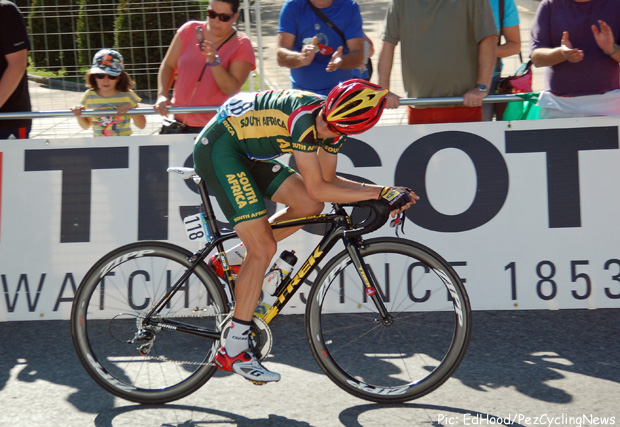 With riders coming across and joining the chasers the gap back to the bunch had stretched out and the Australians were beginning to be concerned. They were looking for some help from the Italians and the Austrians who were playing the long game.

Future BMC rider Stefan Kueng of Switzerland attempted to leave the chasers and make it across to Meintjes but the rest of the chasers wouldn’t let him go.

It was a big ask and Meintjes was tiring and had lost his gap to the chase group of 16 riders. They in turn were being caught by the peloton which was being led by the Australians in team time trial mode. There was only 16 seconds separating the race as Meintjes was caught and the group started the climb past the castle once again.

11 in Front
The lead group had come within just 6 seconds of being caught. With riders dropping back and coming across it settled down to a group of 11 ahead by 16 seconds on the long drag. Most of the big countries were represented in the break apart from the Australians. Kevin Ledanois of France was trying to keep the break alive but as the race headed towards the bell for the last lap the Australians were sticking to their game-plan and keeping everyone in sight.

Ledanois was out on his own as the chasers were caught only to see another group get away over the top of the climb. Something for the home crowd to shout about it contained Gimenez Soler for Spain but it came to nothing as they shrank back to the pack leaving the Frenchman still out in front.

Last Lap
Ledanois crossed the line with 12 seconds in hand but the bunch that still contained about 130 riders was being driven by the Australians. Onto the steep part of the climb and the Frenchman was caught as Portugal and Spain attacked in the form of Joaquim Silva and Mikel Iturria. The Spaniard couldn’t hold onto Silva as he climbed away but a group led by Norway was chasing as they came onto the wide main road. Australia was down to two men but they no longer had control of the peloton as other riders came around them. The Portuguese national road champion was climbing exceptionally well but he was joined by a small group that contained Brayan Ramirez of Colombia who rode away on his own.

Ramirez was going for the win chased by a small group as other riders tried to get across. Racing down towards to the head of the dam Gianni Moscon (Italy) sped away from the chasers towards the leader but completely overcooked the sharp turn across the dam and went down heavily.

The break was caught as riders tried to get across to the Colombian. Now Norway attacked in the form of future Katusha man Sven Erik Bystrom and he quickly caught and passed Ramirez chased by a small select group. Speeding down the hill with 3km to go he was giving it everything and had a decent gap.

The peloton was in full flight as they tried desperately to catch the Norwegian who was now under the 1km to go banner. As they sped along the finish straight the Norwegian rider knew he’d played it right and took a sensational win. 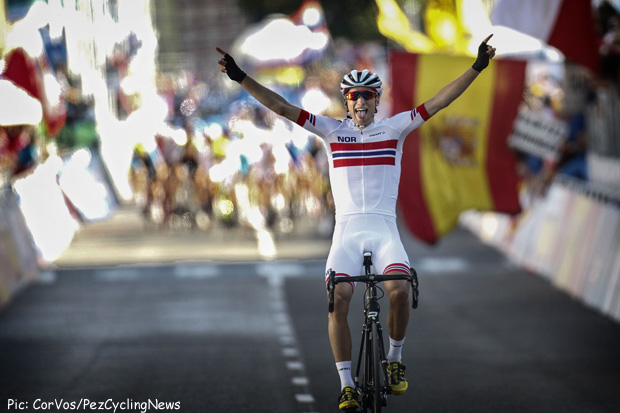 The Australians almost played it to perfection as Caleb Ewan took the sprint for second spot but nobody had counted on the big Norwegian powerhouse getting away on the climb. 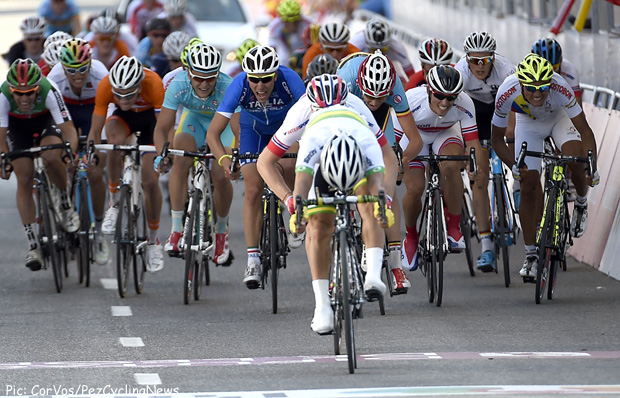 As we say goodbye to Thor Hushovd at the end of the year, Norway now has a new World Champion in the form of Sven Erik Bystrom. Third place went to his teammate Kristoffer Skerping, fourth to Belgium’s Tiesj Benoot with Norway also taking 5th in the shape of Sondre Holst Enger who took third last year. With Bergen being awarded the 2017 championships, Norwegian cycling is on the up.

Frederik Willems will be sports director as of 2015