Race Report: A high quality field led to some high quality racing but the Women’s Road race wasn’t without its surprises. Rain, crashes and some questionable tactics saw the race coming down to a select group sprint won in a photo finish by France’s Pauline Ferrand-Prevot. 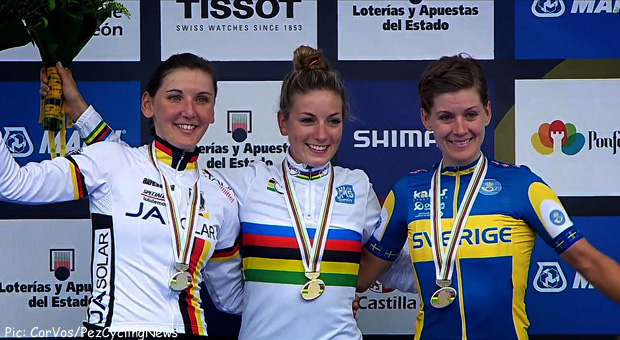 What Was Ahead
Some were claiming today’s race as Marianne Vos & The Netherlands against the rest of the World such has been the Dutchwoman’s dominance in the big events in years gone past but with an ever increasing depth in Women’s racing across the board and countries such as Australia, Italy and Great Britain lining up very strong squads the result was far from a foregone conclusion on the startline at 3pm.

The tough circuit around Ponferrada, the predicted rain showers and with many teams looking to make the 127.4km race as difficult as possible we were sure to get a spectacle. 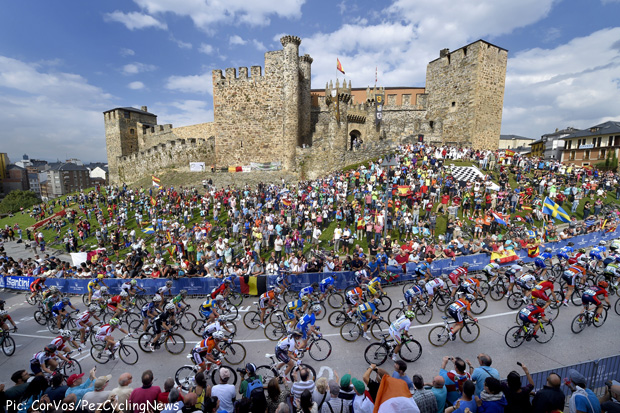 First Action – First Crashes
The first crashes of the day came early as the ladies found that the 18 km circuit is not without its danger points and just as had happened in the Junior Men’s and U/23 events the crashes were coming all too often thanks to a nervous peloton – plus the tight bends with one of the first down being young British sprinter Lucy Garner. She was soon back up and on her way though and was able to regain the peloton which despite a few breakaway attempts was still all together after the first lap.

Shortly afer Garner made her way back a massive crash in the peloton caused all sorts of problems with pre race favorites Marianne Vos and Giorgia Bronzini (Italy) both being caught up but coming through relatively unscathed unlike Canada’s Karol-Ann Canuel who was taken away in an ambulance. Canuel wasn’t the only abandon and now after just 2 laps the peloton was already down to just 50-60 riders but both Vos and Bronzini were in there thanks to some selfless efforts from their teammates to pace them back.

More Crashes!
Just after it looked like things were starting to settle down, yet another crash disrupted the race again – this time on the uphill section of the course. Most riders including all the favorites made it through ok though but this crash did nothing to calm the already frayed nerves of the peloton and with the race at the halfway point all the damage had been done by the crashes rather than the high pace of the field and we still hadn’t seen any significant break attempts.

Action & Rain
Finally a break was able to establish itself with just under 70km remaining but it was a solo move by Spela Kern (Slovenia) and it did nothing to worry the big teams. The Netherlands were keeping the gap in check along with the Germans and Kern never saw more than 35 seconds lead and was eventually brought back a number of kilometers later with little fanfare. There were now just 40km to go and it was time for the favorites to start making their moves as the rain started coming down…

The Big Moves
The small tentative efforts were over – we were down to the serious end of the race now and with a pack of just 66 riders heading into the penultimate lap and the wet roads and frayed nerves in the bunch spectators and riders alike knew that something big was about to happen.

An earlier faller, USA’s Alison Powers tried to turn her luck around with an attack over the finish line but a solo effort from this far out was doomed and she was soon caught which was then when her teammate Evelyn Stevens jumped away. She too was well controlled by the field though and it was then that Aussie powerhouse Rachel Neylan had a dig. These solo efforts weren’t going to be the way to win this race though although this move and the subsequent Italian chase seriously damaged the field with a group of 17 favorites forming at the front coming into the bell lap.

On the bell lap there was a couple more attacks but again nothing could quite stick when suddenly Trixi Worrack (Germany) went for a solo effort and this was the move that Evelyn Stevens (USA) and Marianne Vos thought was ‘the one’. This duo took chase but once again it all came back together with the same group of 17 riders at the front of the race. Then, there was somewhat of a truce, the pace eased off and the group immediately doubled in size as a large group caught back on and with 10km to go there were now almost 40 riders in contention for the win.

The Last 10km
After the crashes, the aborted breakaxways and the wet roads it was all coming down to these last 10 km now with the final climb to prove the crucial point. The peloton split under the impetus of Vos, there were less than a dozen riders now up front and it looked like this could be the move when once again they somewhat sat up with nobody able to get away for the win.

At the 5km to go mark another pre-race favorite, Sweden’s Emma Johansson made her move, Vos followed, the Italian Borghini too along with Lizzie Armitstead (Great Britain). Surely we now had our winning break with such firepower as these four champions?

A Surpising Final Kilometer
Unfortunately for the four out front the dropped riders behind never gave up hope and with the marking between the front four and perhaps some tactical errors they were caught in the final finishing straight by seemingly fresher ladies for a small group sprint. In an extremely tight race it was the young Frenchwoman, Pauline Ferrand-Prevot who took the win in a photo finish from Germany’s Lisa Brennauer with Johansson hanging on for 3rd. 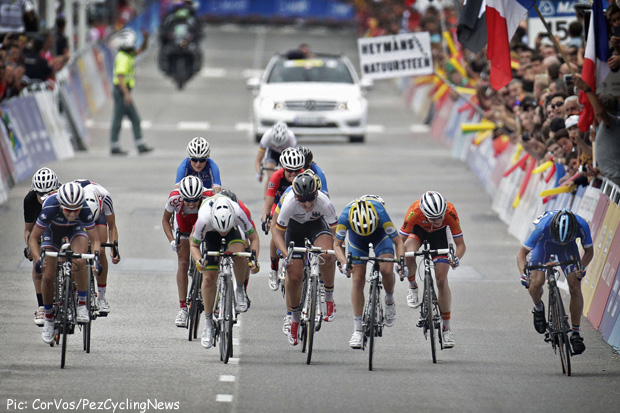 The finish was not the finish that we had expected but a great finish all the same. If today’s Women’s race is any indication, tomorrow’s men’s race over double the distance with more rain predicted should be carnage. Keep it PEZ for more PeloPics, roadside reports and more. 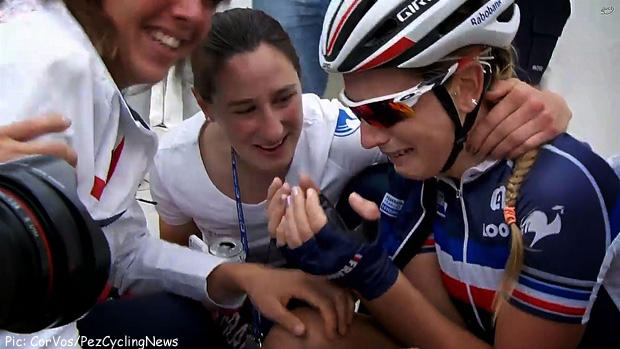 Tears of joy – and surprise for Ferrand-Prevot after the finish