Race Report: The battle of the Lagos de Covadonga between Nairo Quintana and Chris Froome carried on where it left off on Monday with the two riders going head-to-head on the climb of the Peña Cabarga. On this occasion the Sky rider came out on top with a punchy exhibition of climbing superiority. Quintana still leads, but it’s getting closer.

The Tinkoff team had a plan to put Alberto Contador in a perfect position for the final rush up the Peña Cabarga. It semi worked as he was in the right place when the attacks came, but the jumps from Nairo Quintana and Chris Froome were too much and the honors were fought out between the Colombian and the Kenyan. 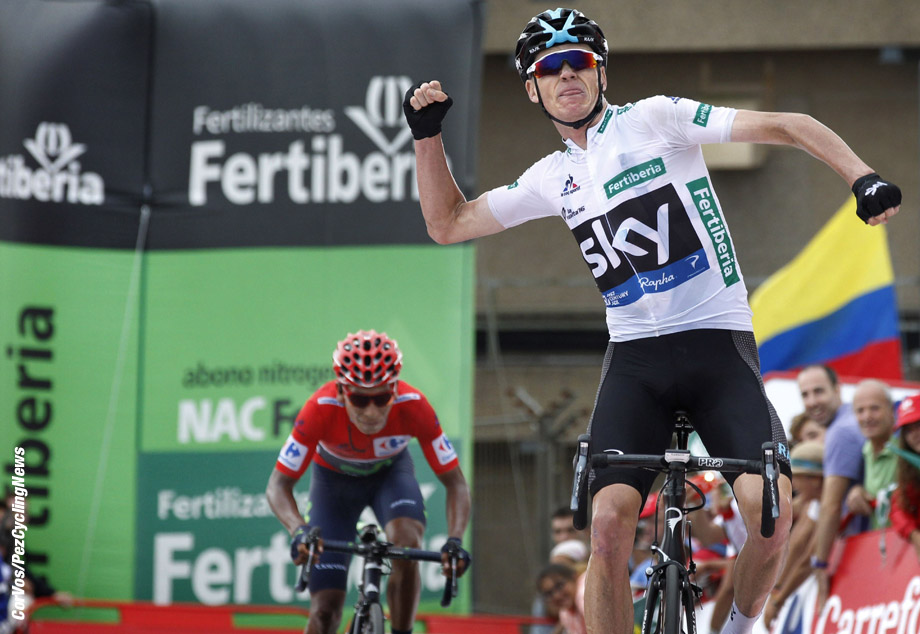 Two riders did not take to the start line in the Jurassic Museum of Colunga; Silvio Herklotz (Bora-Argon 18) and Simon Clarke (Cannondale-Drapac). Clarke with a fractured scapula from a crash on Monday’s stage 10. The 168,6 kilometer route followed the undulating Cantabrian coast to Santander before turning in-land to climb the Cat 1 Peña Cabarga. The profile didn’t vary much between sea level and 100 meters before the peloton hit the climb to the summit finish. The Peña Cabarga comes after 163 kilometers and kicks up with ramps of 19% in places with an average gradient of 9.8% for its 5.6 kilometers. This part of Spain is an undiscovered gem as many people normally land at the port of Santander and then drive south for the sun.

The start was fast as there were many riders with the plan of getting to the climb with enough time to take a stage win, this pushed the speed up and the race covered slightly less than 50 kilometers in the first hour. There had been some break attempts, but all failed until a large group of 23 riders eventually were allowed to escape.

The Break of the Day
With 120 kilometers still to race, the escape group of the stage began to form. Within 10 kilometers they had a lead of nearly 2 minutes and a further 5 kilometers down the road they had nearly 3 minutes and the peloton had decided to let them go. 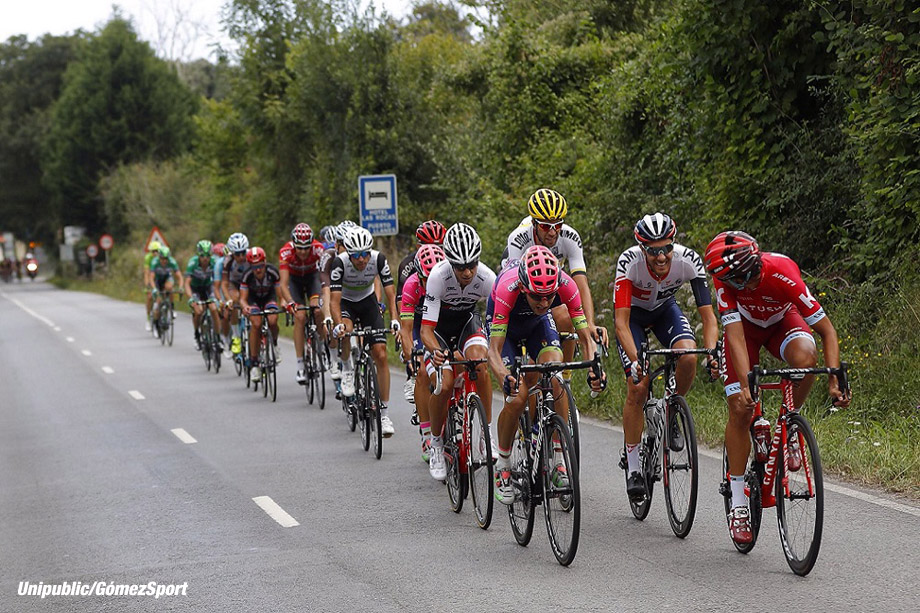 When the lead hit the 5 minute mark, with 80 kilometers to go, Tinkoff started to help Movistar with the chase work, this held the leaders at 5 minutes through the feed zone. 5 kilometers later and the lead was down to 3:50, all thanks to the Russian team.

The best placed rider in the front group was BMC’s Ben Hermans at 6:55, but his chances of any glory was looking very unlikely due to the pace setting of Tinkoff. 70 kilometers out and the lead was 3 minutes and it looked like Alberto Contador’s boys had it in for the escape. Another minute was knocked off the lead in the next 10 kilometers, all the work being done by Tinkoff, they must have a plan.

50K To Go
The speed eased off as Tinkoff seemed to be happy with a 2 minute lead. At the sprint in Suances (46km); Etixx – Quick-Step’s Zdenek Stybar was first across the line, the lead was 2:17.

Tinkoff were not easing off as they took a further 30 seconds from the break 40K out.

Katusha’s Tiago Machado thought it was time to go for another solo off the front, it didn’t last long and he was replaced by Janse van Rensburg who was looking back for some support, it never came, so he too came back to the group of leaders.

The lead dipped under 1 minute as the race had less than 30 kilometers to go to the summit finish, there was a move instigated by Pieter Serry, but that also didn’t gel and the race still consisted of 23 riders ahead of a fast Tinkoff powered peloton at 52 seconds with 22 kilometers remaining. The gap was still the same as they passed under the 15K banner.

Into the outskirts of Santander and Pello Bilbao (Caja Rural-Seguros RGA) tried to escape the leaders, but like the other attempts he was pulled back as they came into the final 10 kilometers. 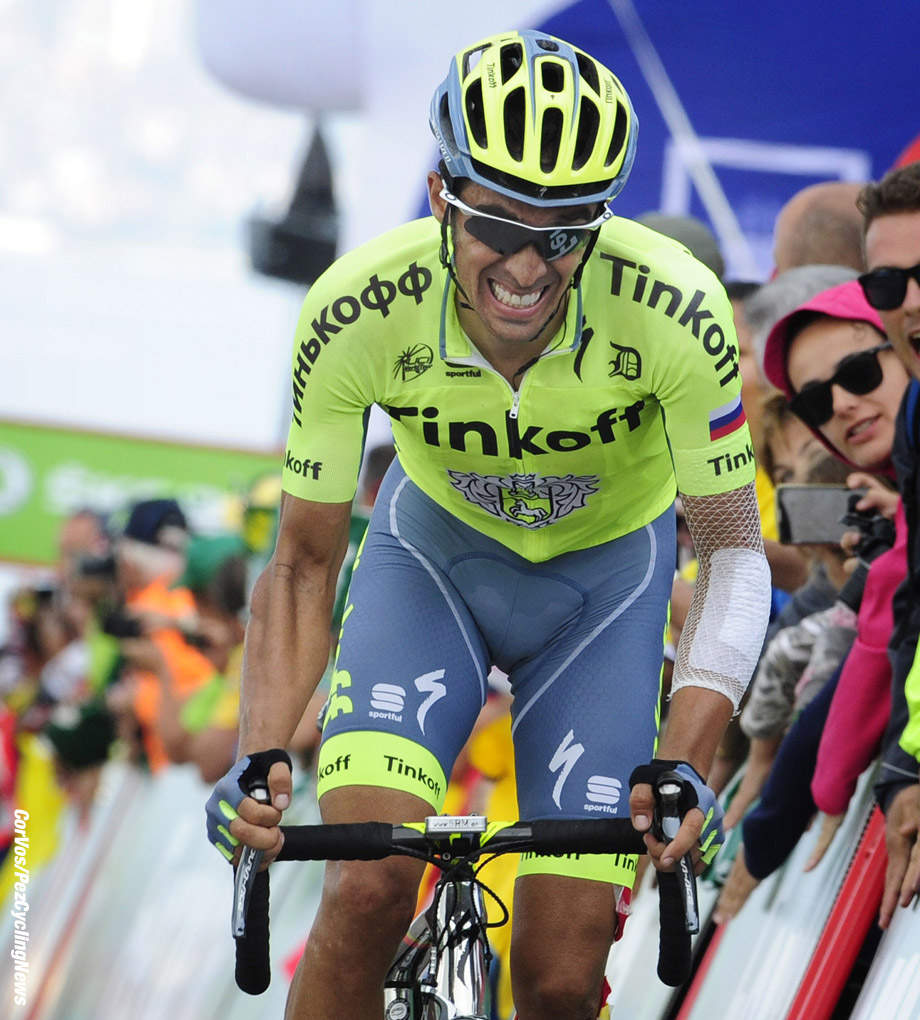 The Peña Cabarga
Tinkoff had all their men at the front, Movistar and Sky were massed behind them ready for the action of the day. As the break neared the climb it started to split, but the peloton was on their heels and the race hit the Peña Cabarga with Ben Hermans off the front with Bakelants on his wheel.

Movistar had taken over control of the peloton and was pulling the remains of the break in one by one as Hermans and Bakelants pushed on. 4 kilometers from the line and Bakelants was dropped leaving Hermans with 10 seconds on the GC men. The Spanish telephone team had slimmed the peloton down to the men who mattered (around 30) and with 3K left to race Hermans was caught. 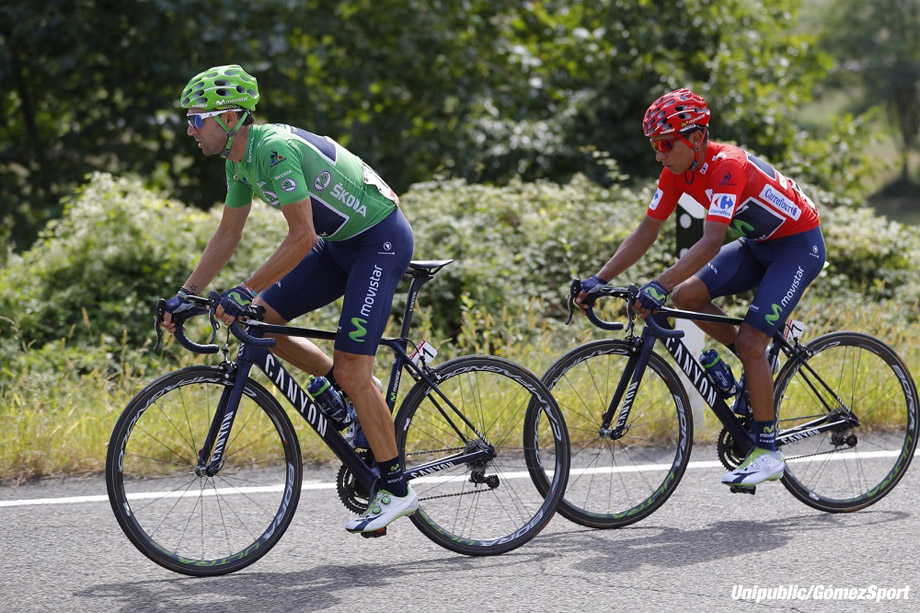 Ruben Fernandez pulled the peloton up the Peña for Quintana at a pace that dissuaded any attacks, until Esteban Chaves (Orica-BikeExchange) jumped at 1.6 kilometers out. Valverde took up the challenge with Konig and Froome on his wheel, but the young Colombian soon had 17 seconds at the red flag. Konig chased before leaving Froome on the front.

The red jersey of Quintana shot forward and put in a big effort to pull back Chaves and to launch himself up the road, the only rider to go with him was. . . Froome. 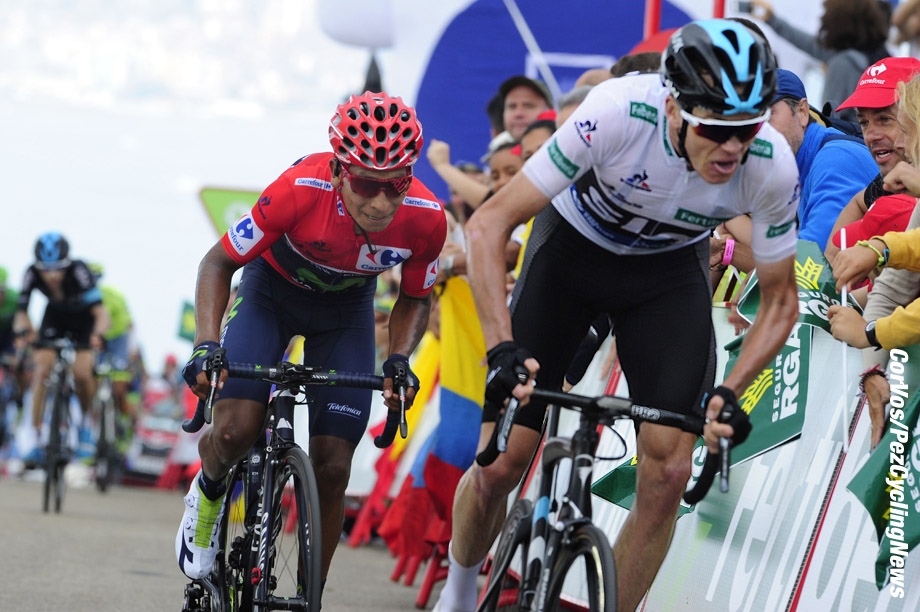 Another jump from Quintana couldn’t shift the Sky man and as they came in sight of the line, Froome attacked on the steep camber to distance Quintana by a bike length to take the stage honors. Valverde sat on the wheels to jump past Konig and Contador for 3rd place. Chaves blew and was passed by his teammate Simon Yates and Astana’s Michele Scarponi.

Chris Froome is now in 2nd place overall, 54 seconds down on Quintana with Valverde 3rd at 1:05.

Keep it PEZ for all the Vuelta fun and catch up with all the news in tomorrow’s EuroTrash Thursday.