Roadside Greatest Hits: I decided to be there. With all those people, on the hills where Marco Pantani was training. At any turn you can hear his breath – that’s what the locals like to say. It was cloudy but didn’t rain, was exiting and exhausting. If you want to know more it’s the right time to discover the Pirate’s roads.

We rolled through a lot of content over the past month, and the Roadside reports were some of my favorite that the PEZ crew has ever put together…so, in these first few days of post-Giro doldrums, we’ll re-run some of the favorites from the Giro gone by.

I was on these roads two years ago, chasing the stage from Urbania – Cesena. While I approach Rimini I start to worry about the weather; not bad on the sea but the black clouds over the mountains are really bad. Exactly the direction I have to take. Half an hour and I am in another world. 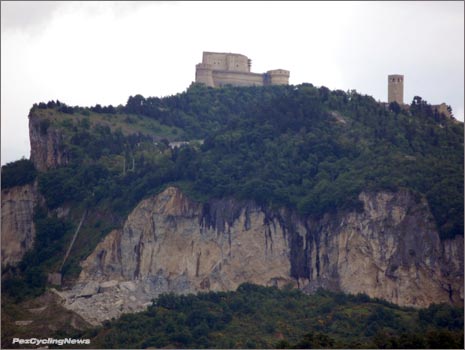 Far from the transgressive Rimini, here the time has stopped the day when the corpse of Cagliostro was left on a well in the San Leo square. Cagliostro was a magician of XVIII century – his name is linked to the esoteric and freemasonry, and he was sentenced to death by the church.The legend says they never found him again. San Leo rock is above me but I have to turn on the opposite side of the valley. Seven kilometres to the top. Will I be able to reach the top? If I want witness two passages I have to. 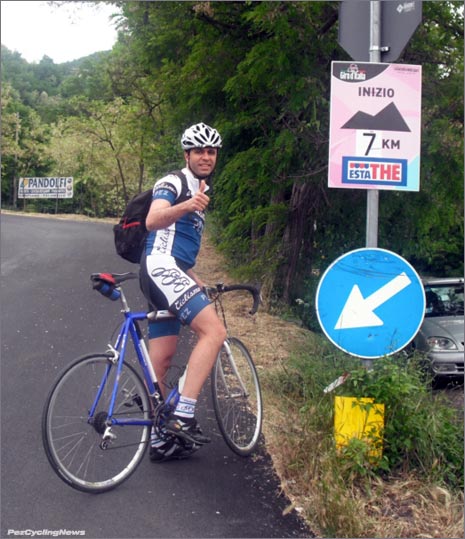 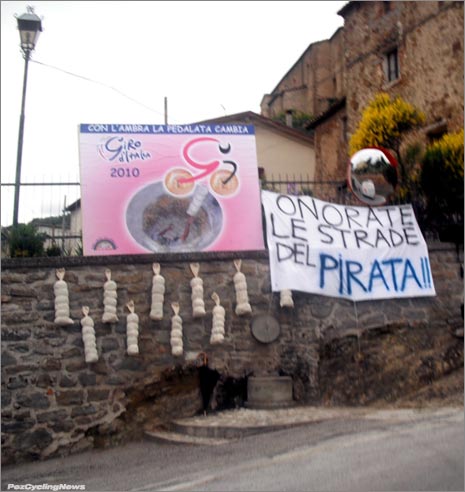 In fact the plan is watch the first passage in the Perticara (the first climb of the day) and the second on the Barbotto. At any turn I should hear “his” breath, in fact everybody is hearing my one. It’s confirmed, I’m totally out of form. 10-11-12 km/h, I’m proceeding quietly because I want arrive on the top. 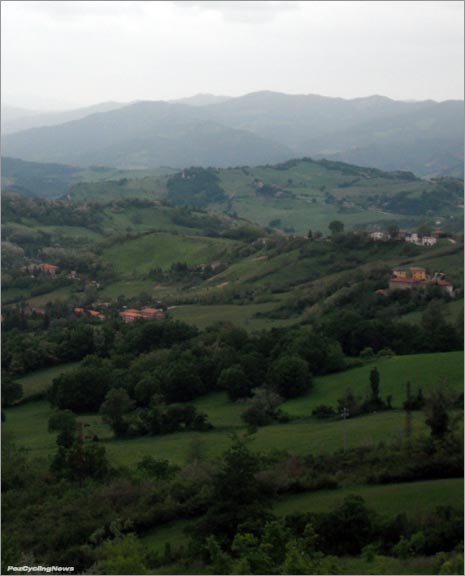 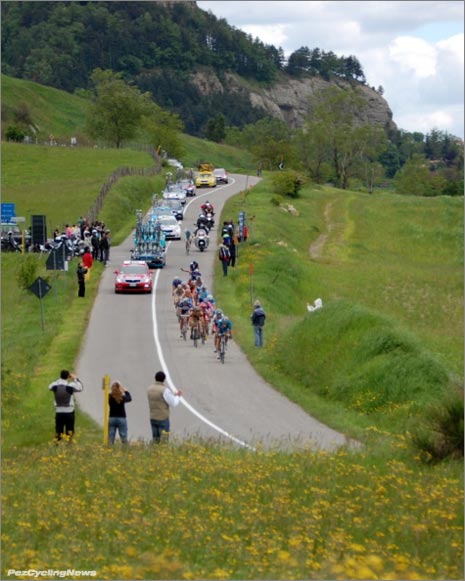 The climb works on my side because it’s not too hard and there’s also a strong wind blowing behind. When I arrive on the top I would like to eat something, but it’s too late and the race is already approaching. 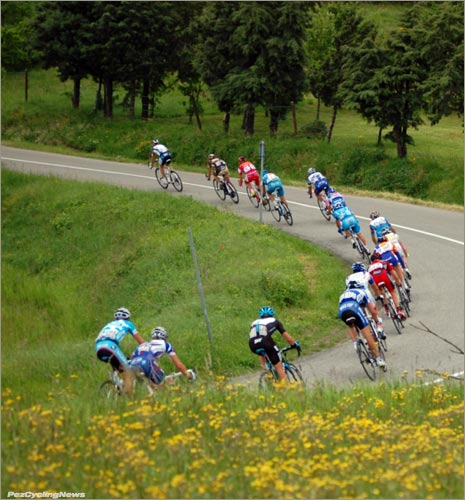 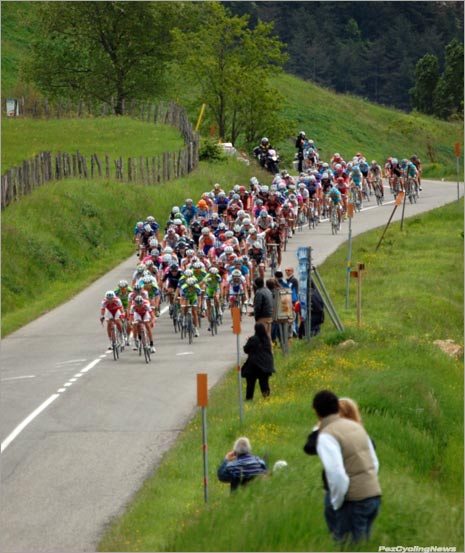 So I look for a nice place to stay in peace for few minutes and I find a field covered of yellow flowers. These flowers will become small clouds invading the air with their small parachutes in the next week. Now they’re just flowers. 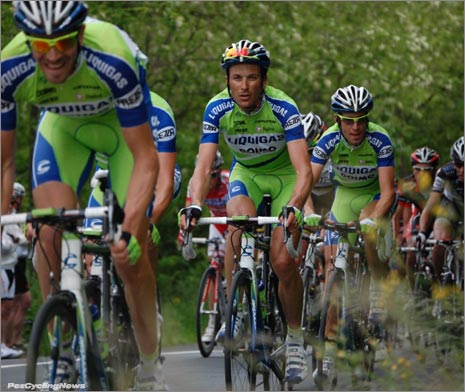 The Giro comes and there are seventeen ahead. I think the leaders want to keep quiet before the Alps and the final terrible week. The bunch is led by Liquigas but they’re proceeding quietly. 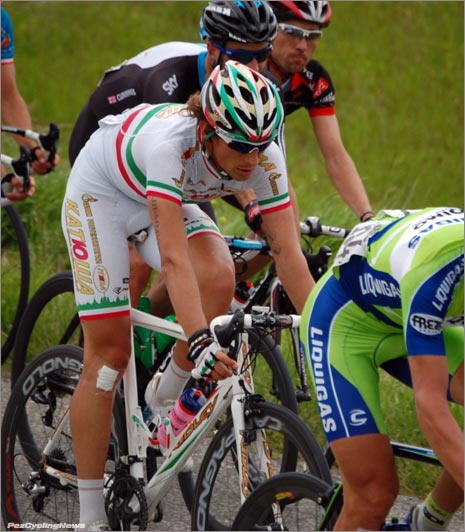 Seven minutes the gap. Inside the group I have the time to recognize Pippo, the Italian champion that was able to save the National honour by winning yesterday’s stage. A picture of him is a must. Thanks Pippo.

After the race I ride again my bike. Next stop: Barbotto. This was really the training climb of Pantani. He was frequently riding over there because the final kilometre to 18% was a good test for him. Luckily I come from above and I have not to ride that piece. 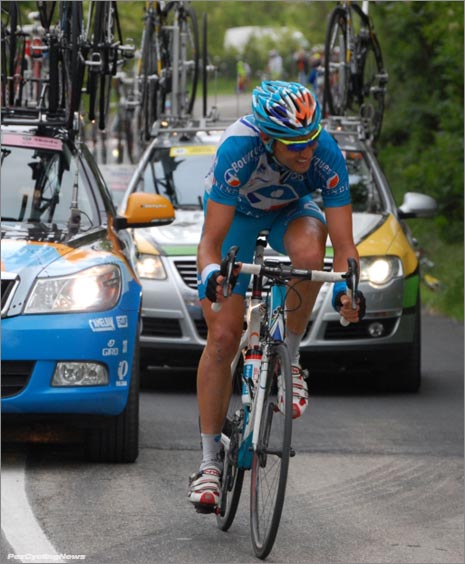 There’s a lot of people and too many cars and motorcycles. Seems impossible to pass on the road, but with a lot of patience, I finally get the road of the race again. Just a few meters to find a good place for pictures and the Giro is already coming. 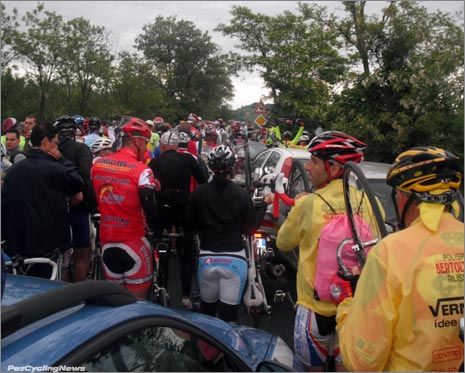 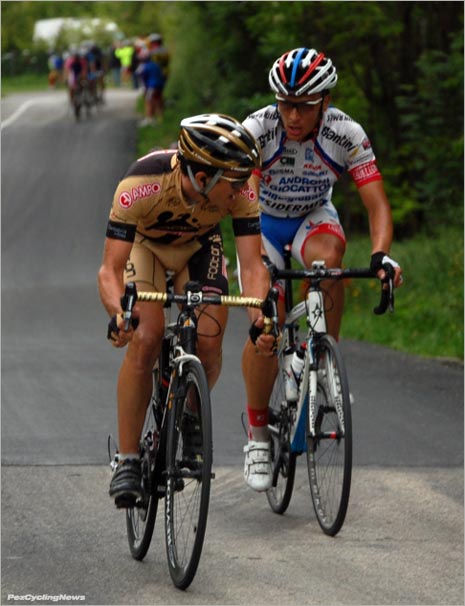 The seventeen are split in several small groups. There are two riders attacking and I believe one of them is “our” Rubens. Anyway, my cry is for both. The group comes and Liquigas is still making tempo. Basso is well ahead with Nibali. The maglia rosa is little bit behind but not in trouble. 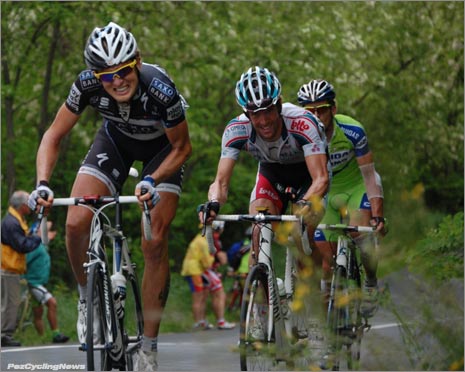 The Giro flies away; no time either to think it’s last time this year. I have to think of the way back; ten kilometres of road to get again in Perticara. The wind now is blowing against and the road is climbing imperceptibly but it’s enough to suffer. I feel hungry and tired. But Perticara is not far away and I proceed just with the idea of my panino. Will be not a panino but a piadina, the local speciality. What inside? A sweet prosciutto and sheep cheese inside. 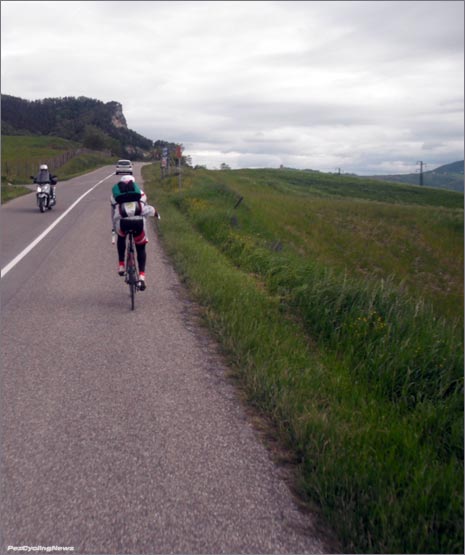 The way to home is still long, but now I feel a king and I taste my piadina with all possible pleasure. My wife will be angry because I’ll be late for dinner, Pez will be upset because I’ll be late with report. Really? Here the time has stop the day Cagliostro died, few kilometres far away from here. Here time is senseless. And I will keep this in word. 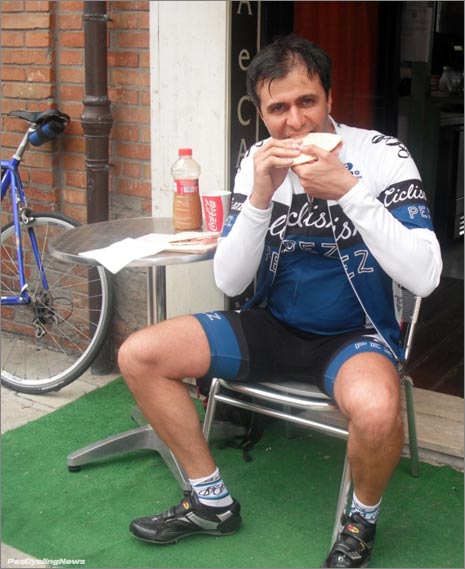 My (short) Giro finishes here, on these roads. I was a Pantani supporter and I chased his wheels all over European roads. But those climbs are a home.

“The Giro starts tomorrow”, we say this in Italy. And in fact tomorrow starts a long week of mountains. This story is also a passage to Matt who will have the honour to accompany you in the next days. 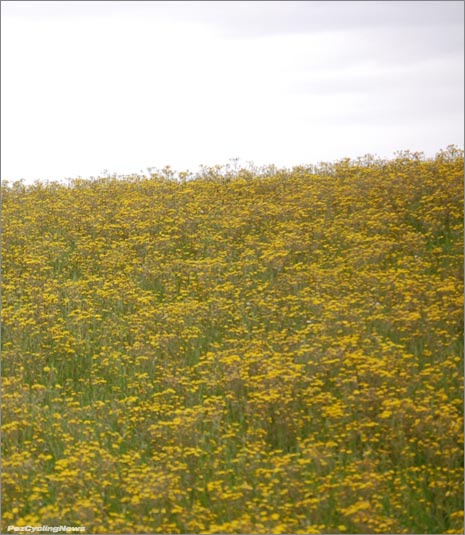 That’s all, and was enough. I will miss these moments in the evening trying to get order in my thoughts. Will miss the Giro and the people. Will miss the yellow flowers. They’re now becoming small soft clouds. Wind will transport them far away; never mind, they will be part of this story forever, in their yellow dress.