ROADSIDE PEZ’22: Ed Goes to the British U23 TT Champs

Ed goes to the GB National TT: In the absence of a trip to France to see the Tour, Ed Hood had a shorter journey at the weekend to watch the British time trial championships in the deep south of Scotland. Ed always takes notice of the ‘Young Guns’ so the Under 23’s were the big attraction. 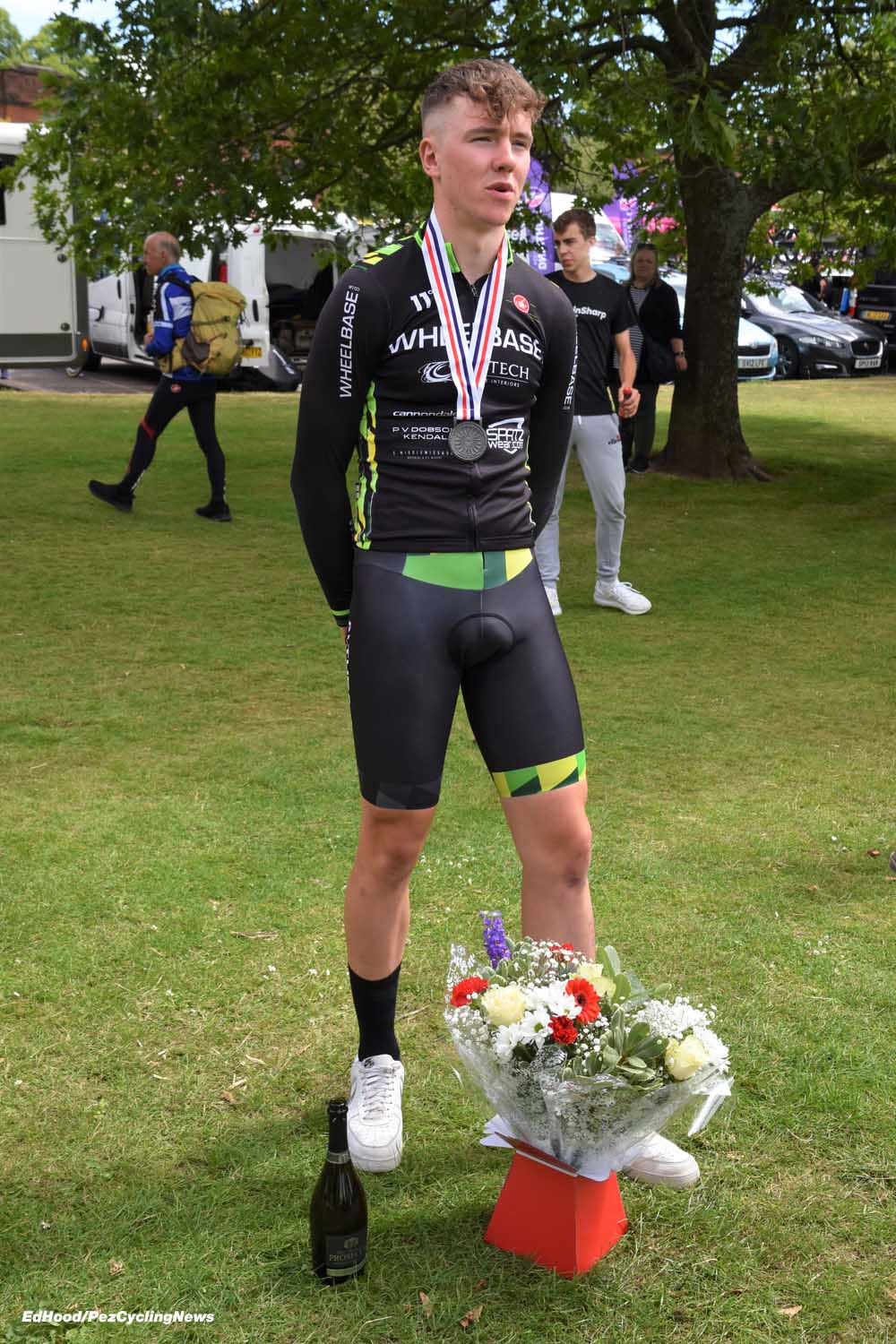 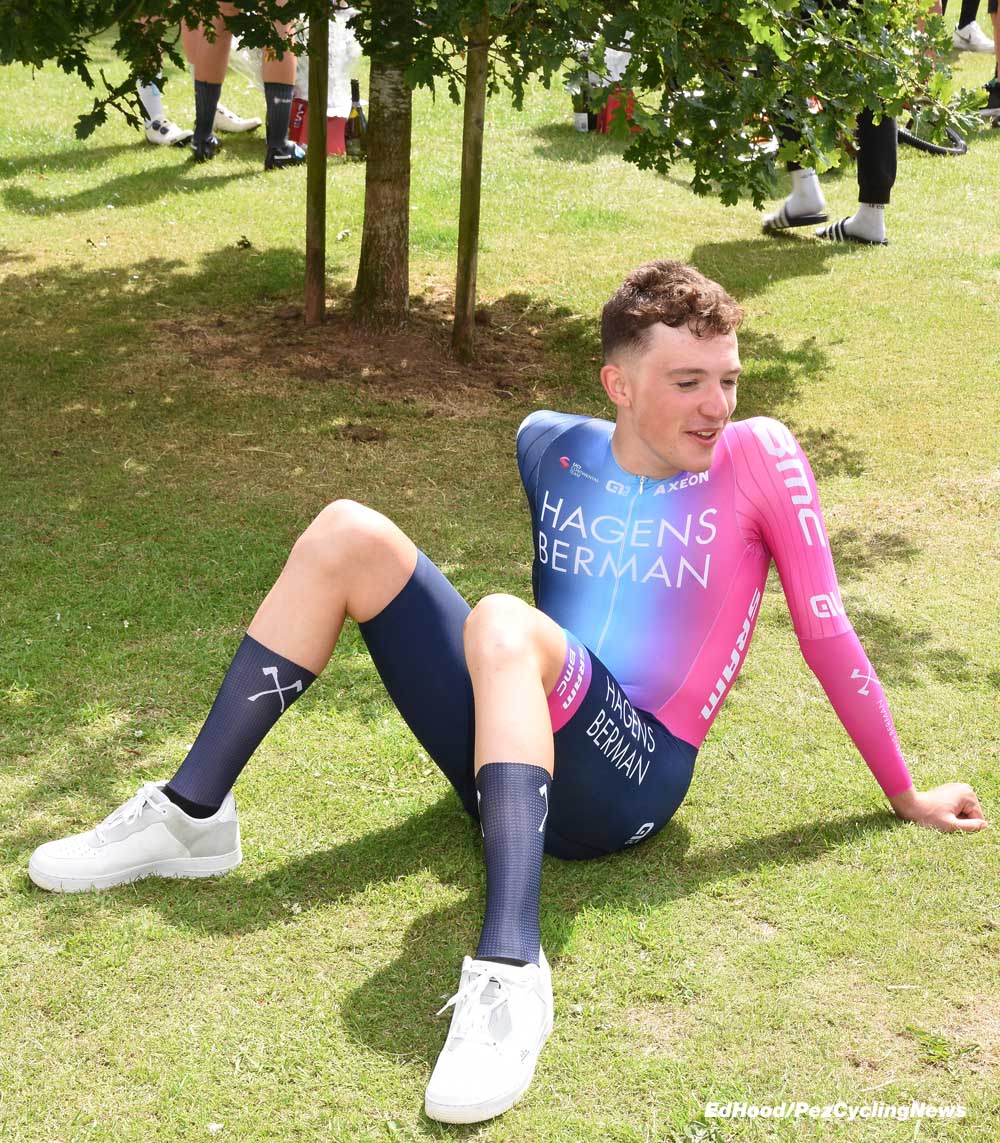 On Thursday over the roads around Dumfries, Scotland and along the beautiful Solway Firth he endorsed his potential, taking silver in the British u23 Time Trial Championship, beaten only by 2022 Baby Giro winner, Leo Hayter but leaving riders like Groupama FDJ big hitters Sam Watson and Lewis Askey in his wake. My Amigo, Davie Henderson and I left Kirkcaldy at 06:30 am for the long haul down to Dumfries on a grey morning which later blossomed into a glorious summer day. 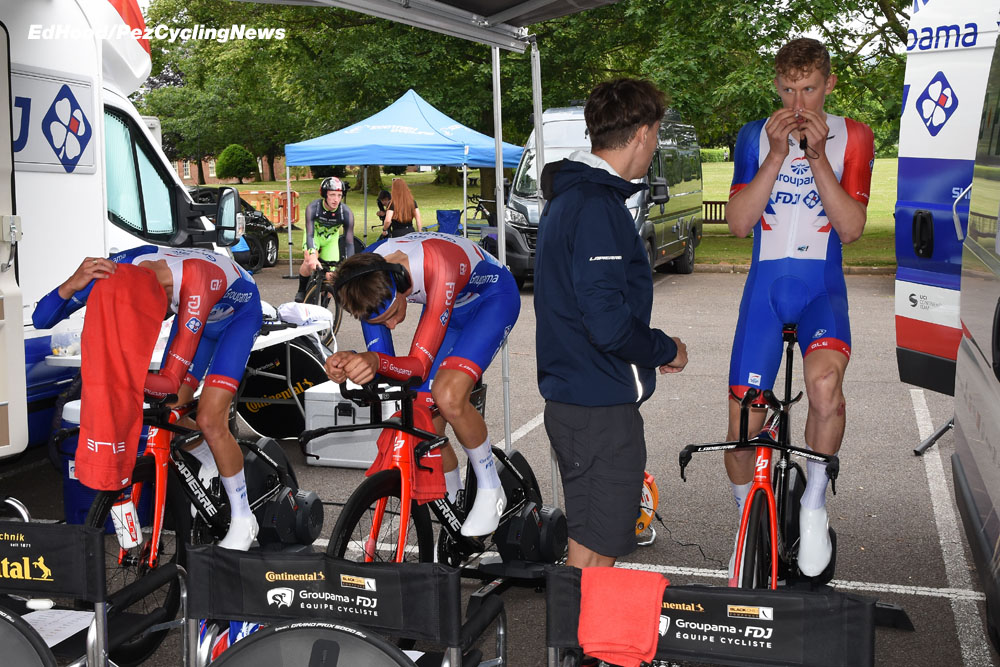 The first thing that you have to do at any race is, ‘have a nose,’ at the riders, bikes, team vehicles – Groupama FDJ was there in force, riders from their u23 Continental team and the World Tour; with the very talented and aggressive Lewis Askey, seen here getting the Olbas oil into his pipes. 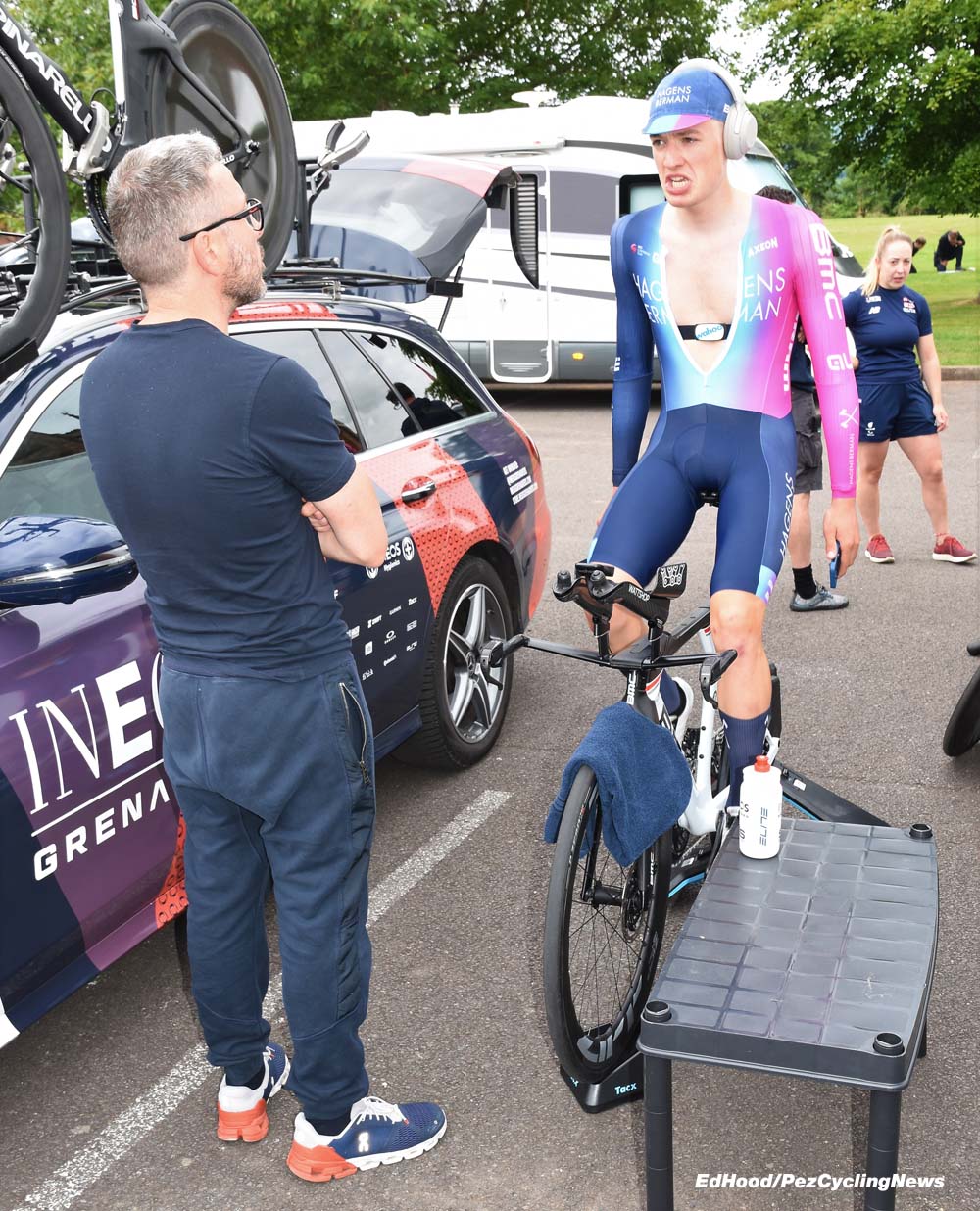 Hot favourite and u23 ‘Baby Giro’ winner, Leo Hayter [Hagens Berman Axeon] looked nonchalant as he warmed up, the car on the left perhaps gives a clue to which name will be on his jersey in 2023. 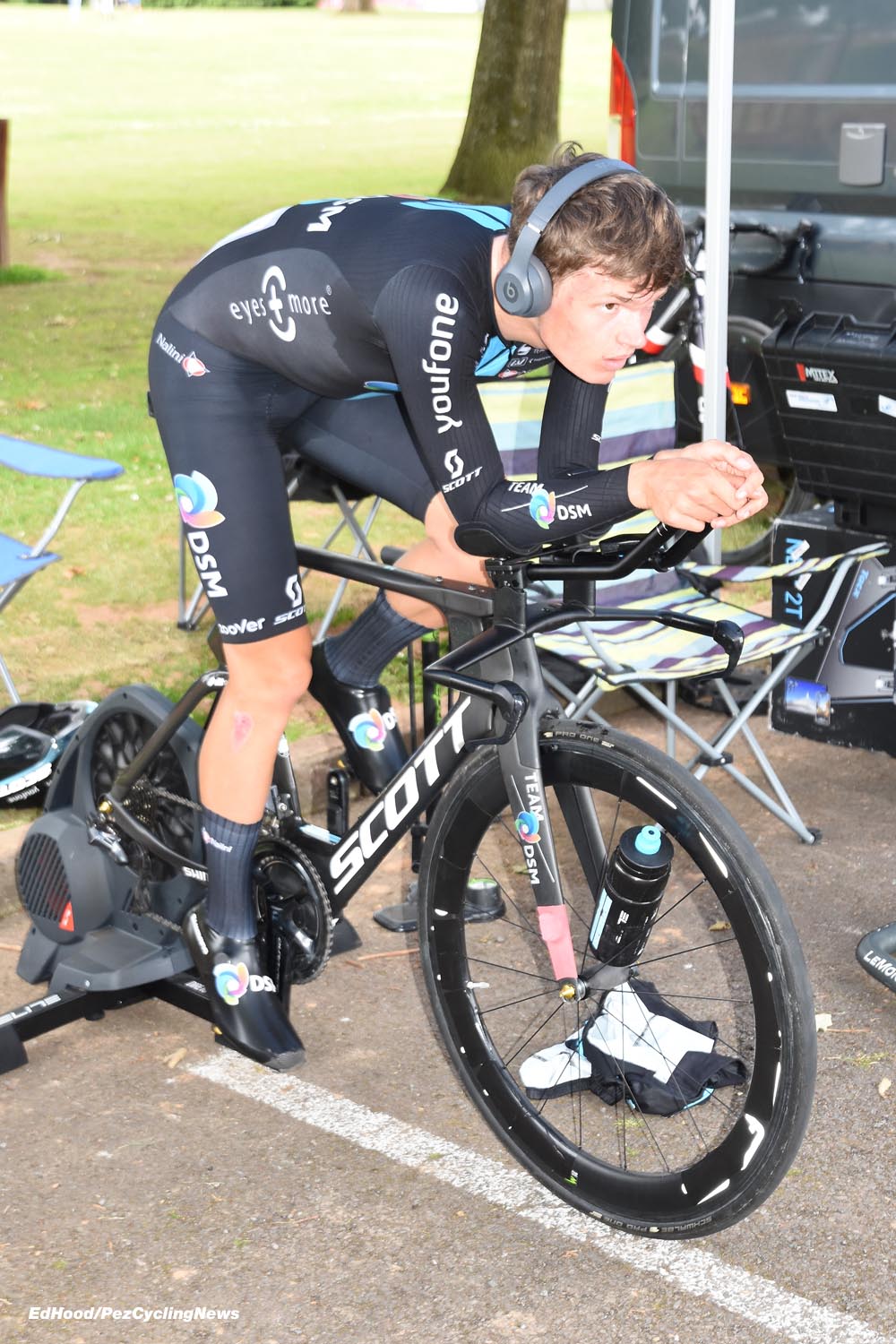 Scotland’s Oscar Onley [DSM] looked focused as he warmed up; he’s having a good year, fifth in the Circuit des Ardennes and a fine ninth in the Baby Giro. 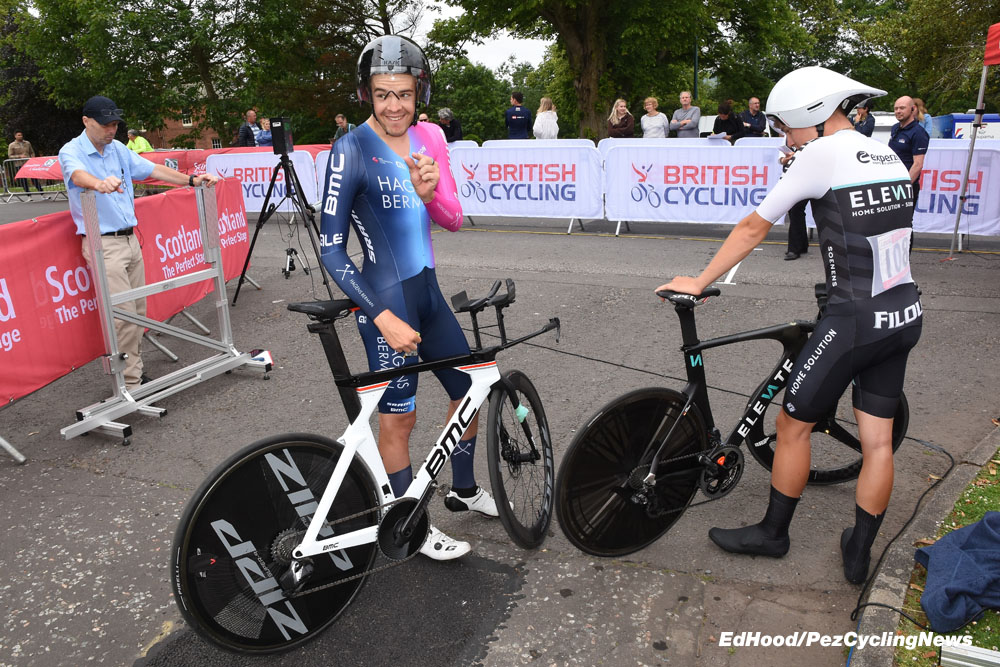 Joe Laverick wouldn’t be on Axel Merckx’s Hagens Berman team if he wasn’t talented but the results haven’t been startling this year. Back in the 70’s, Alf Engers said that you had to, ‘get into the zone’ before a time test, no distractions, ‘don’t talk, just nod.’ The cycling humourist, Mick Gambling wrote that at one TT start the time keeper thought he had gone deaf because he couldn’t hear anyone speaking. . . But that was way before Joe’s time and here he jokes around with his support staff as he goes to the start house. 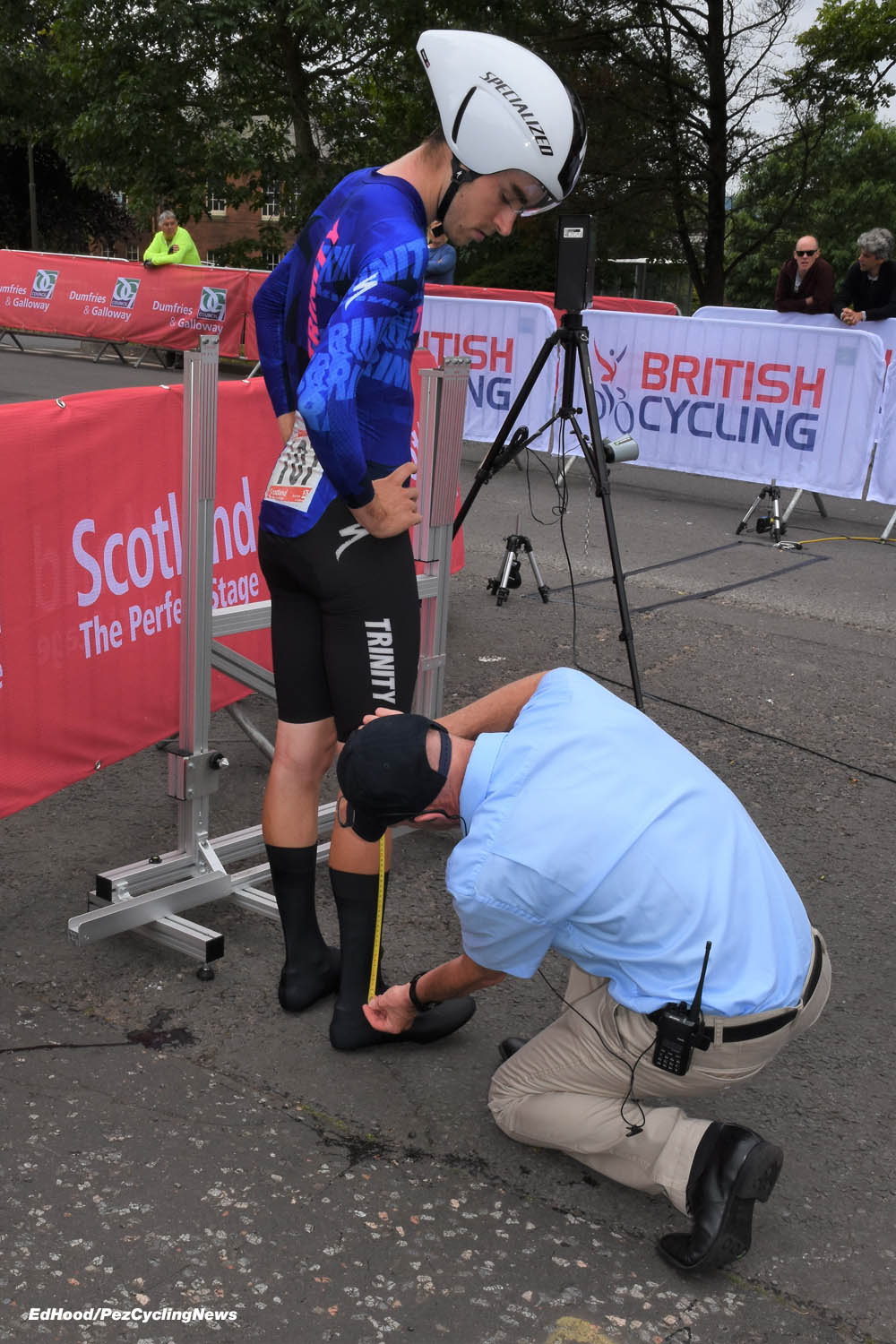 And yes, they really do check the length of your socks – Max Walker of Trinity the man getting measured. 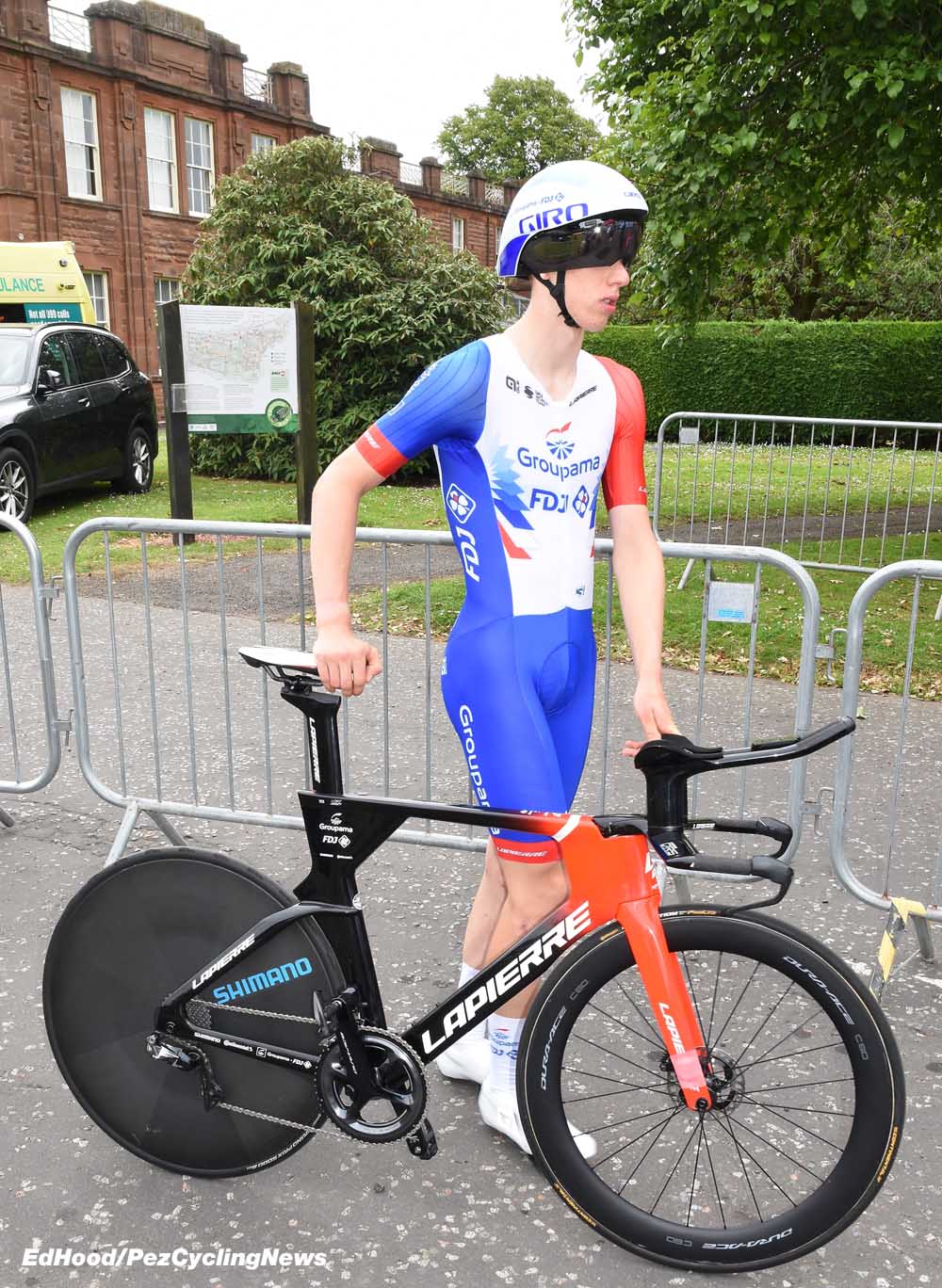 Lewis Askey was astride one of those lovely Lapierre ‘Aerostorm’ TT machines, which pull off that trick of looking extremely fast, even when they’re motionless. 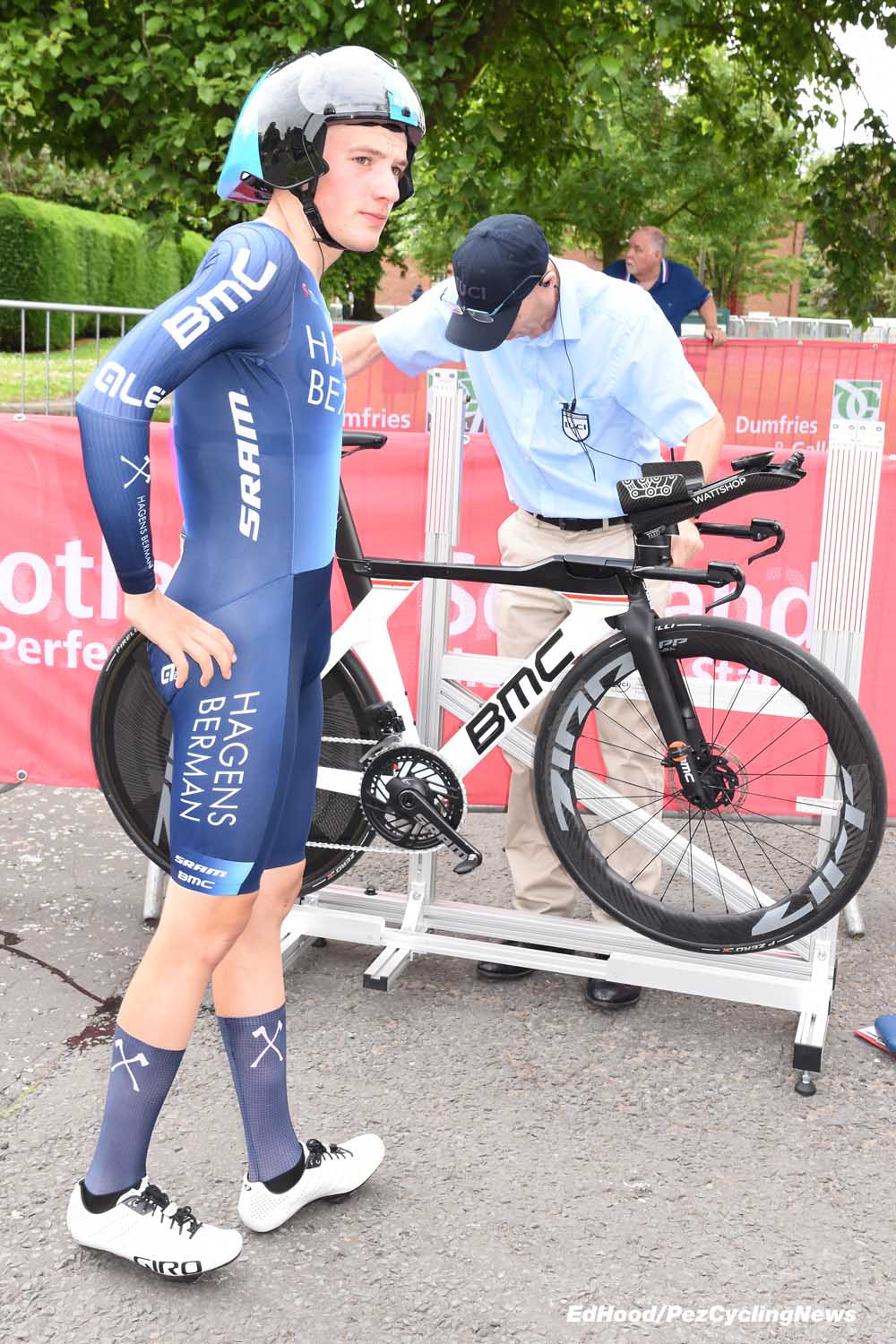 Hayter looked relaxed as the commissaire checked his machine’s dimensions, I was a wee bit surprised that so many riders only had their machines checked as the came to the line; pro mechanics always get the bike checked as early as they possibly can so as there’s time to make any adjustments – the bike might have taken a bump in the team vehicle en route the race? 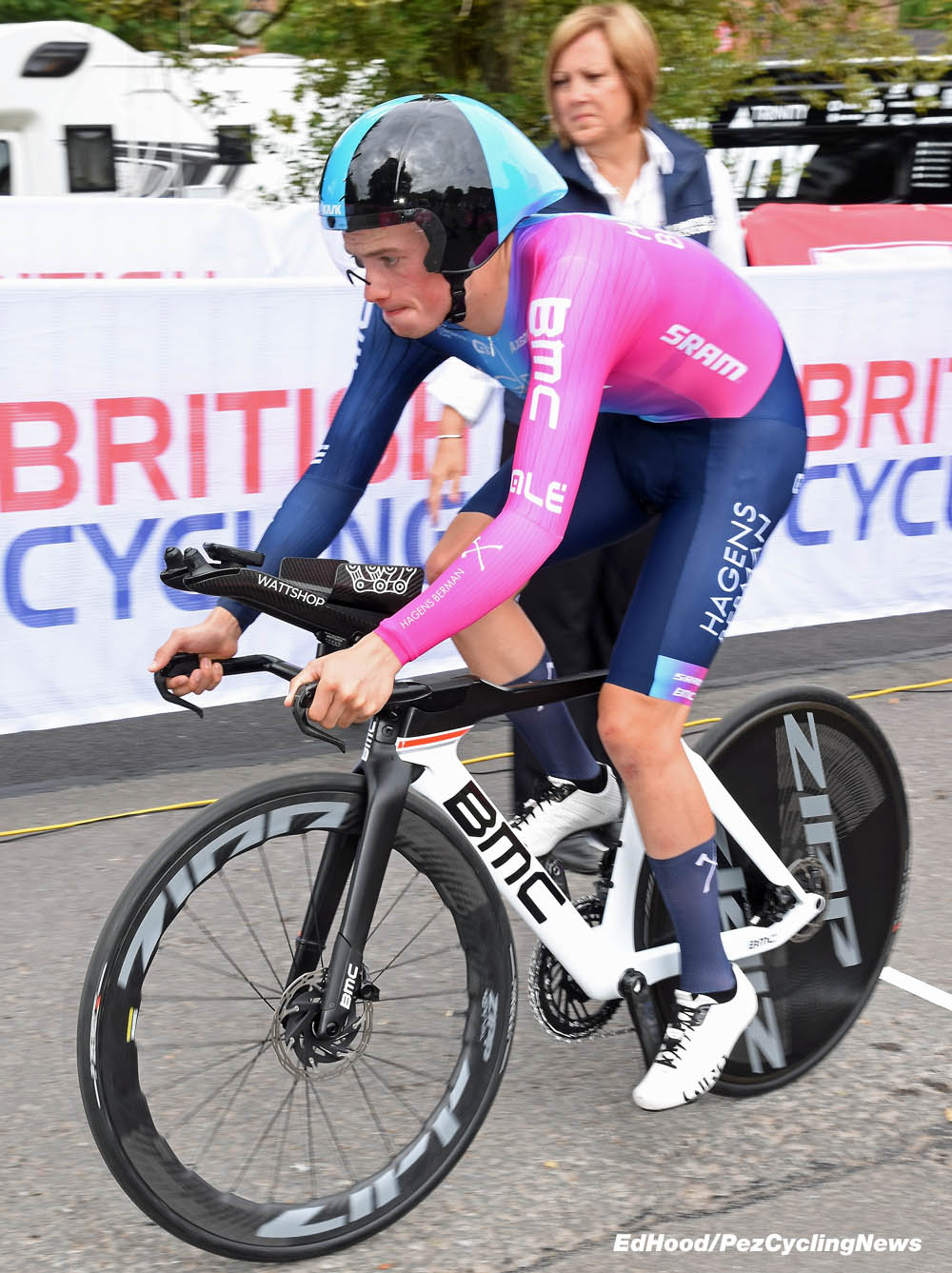 And then Hayter was off, custom Wattshop ‘skis’ to the fore – and I wonder where he got that helmet? 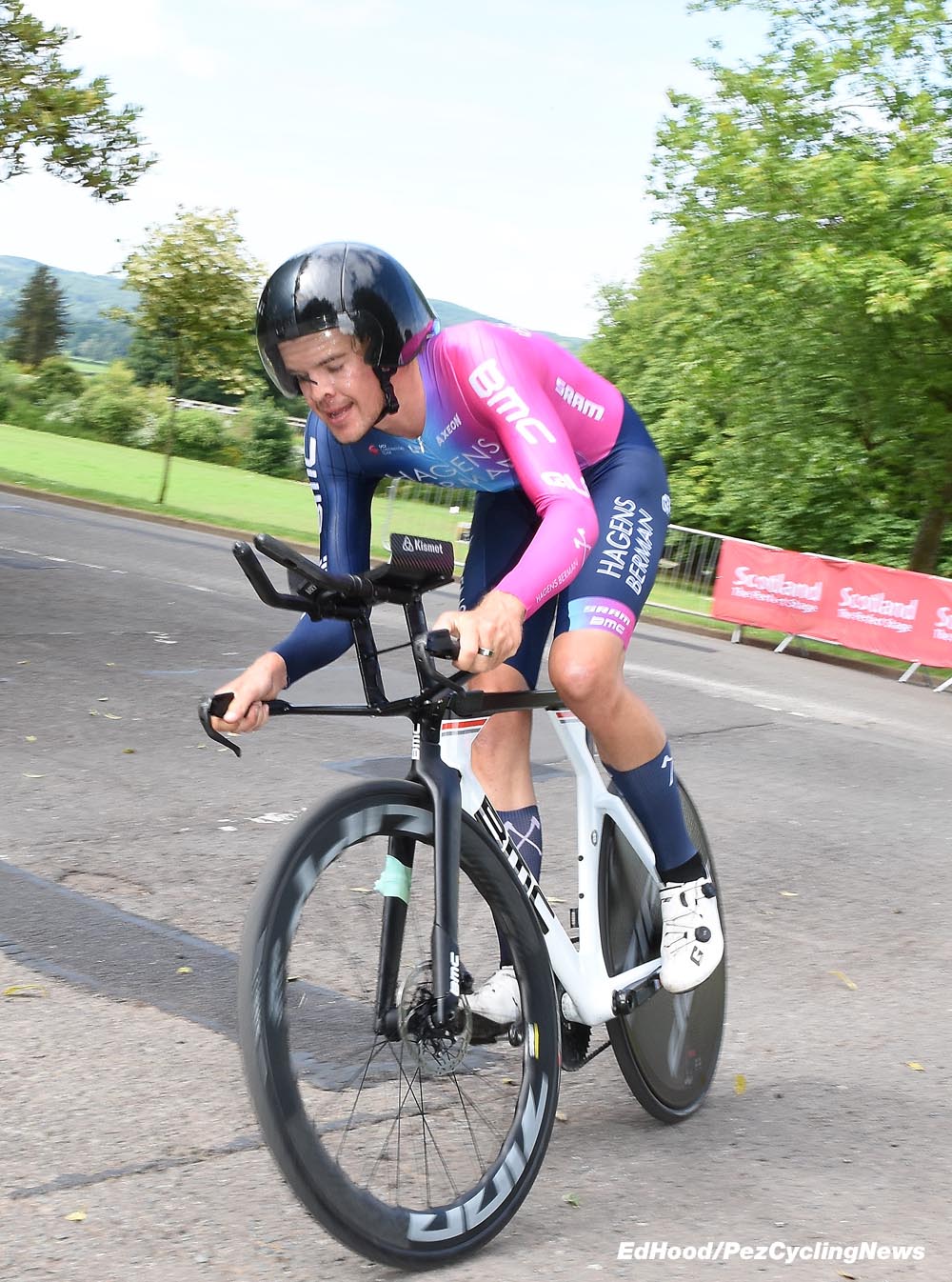 The finish at the beautiful Crichton Park – which dates back to 1823 – was technical, a tight right then a steep-ish ramp to the line. Joe Laverick didn’t get it right, coming in too ‘hot’ having to brake then ‘clack’ back down the gears to get on top of things up the ramp, he still averaged a rapid 49.694 kph for sixth place. 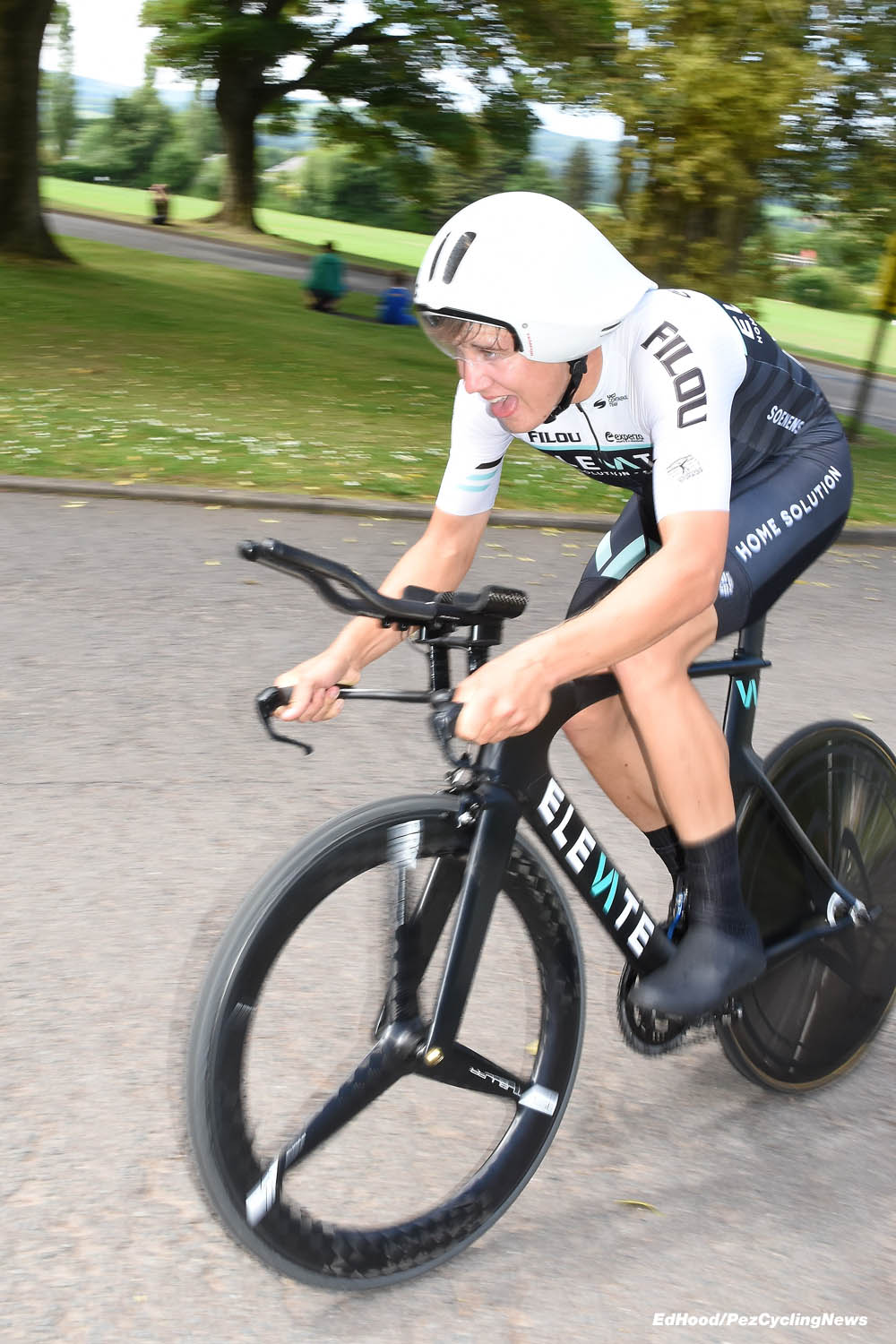 Thomas Day is with the Belgian continental team, Home Solution – Soenens u23 Development, last year he was on the high level SEG Development team with Sean Flynn but sadly that team folded. We’d perhaps expected a little more than seventh from Thomas as man who’s finished well up in the u23 Chrono des Nations. 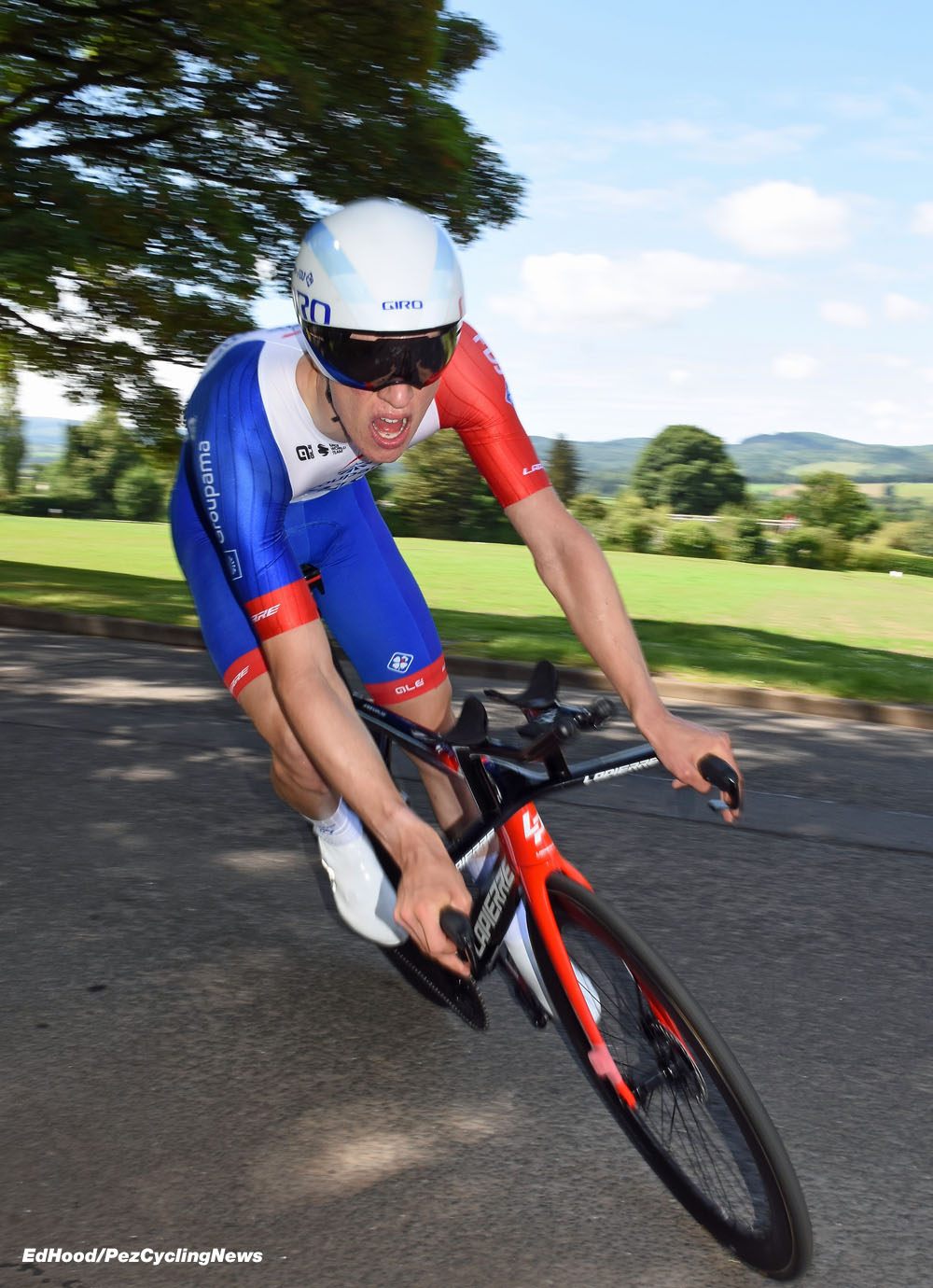 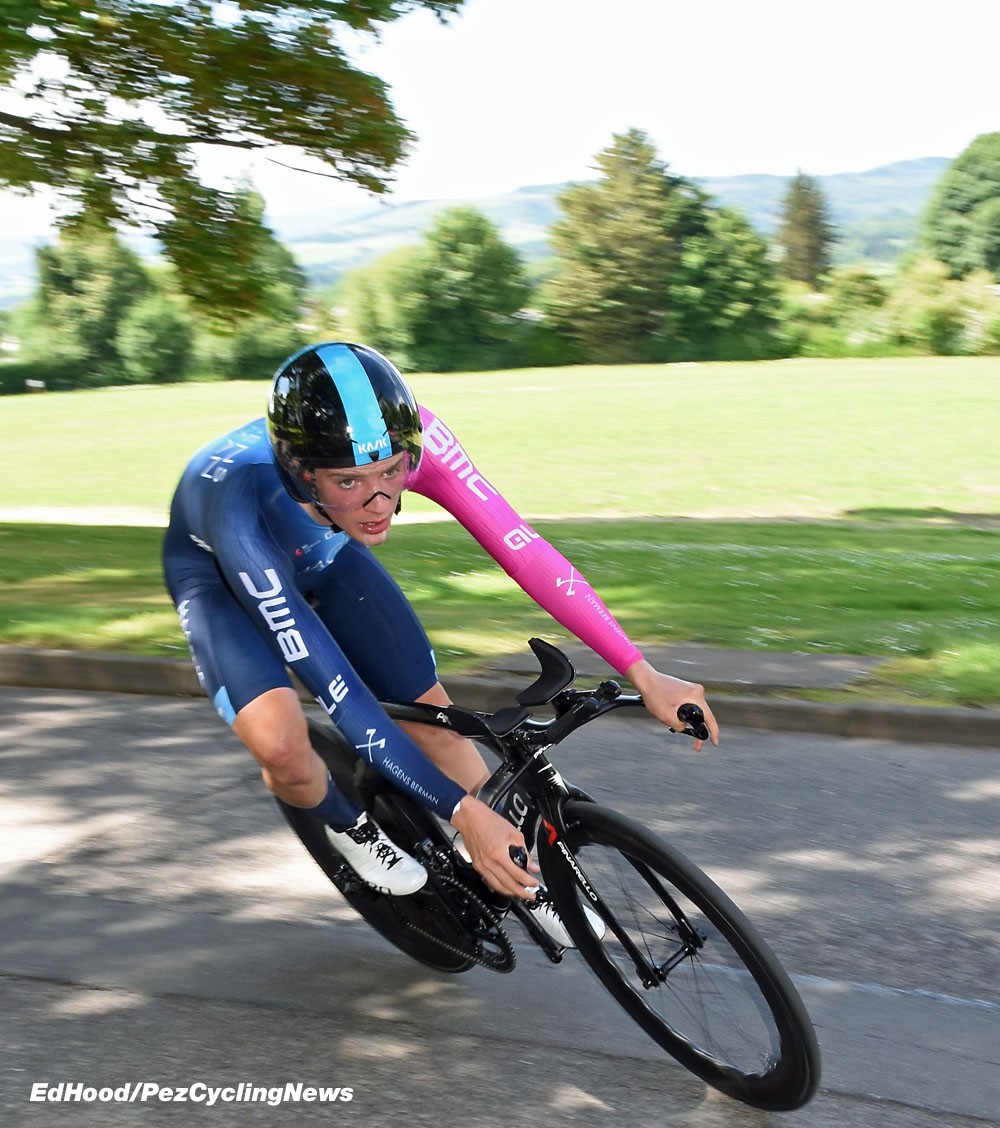 Hayter looked every inch the champion on the last corner, no dud lines for him.
His margin of victory was ‘only’ 17 seconds but he did have a bike change; cynical old me was thinking; ‘really?’ But he started on a BMC and finished on a Pinarello, another clue to where he’ll be for the 2023. 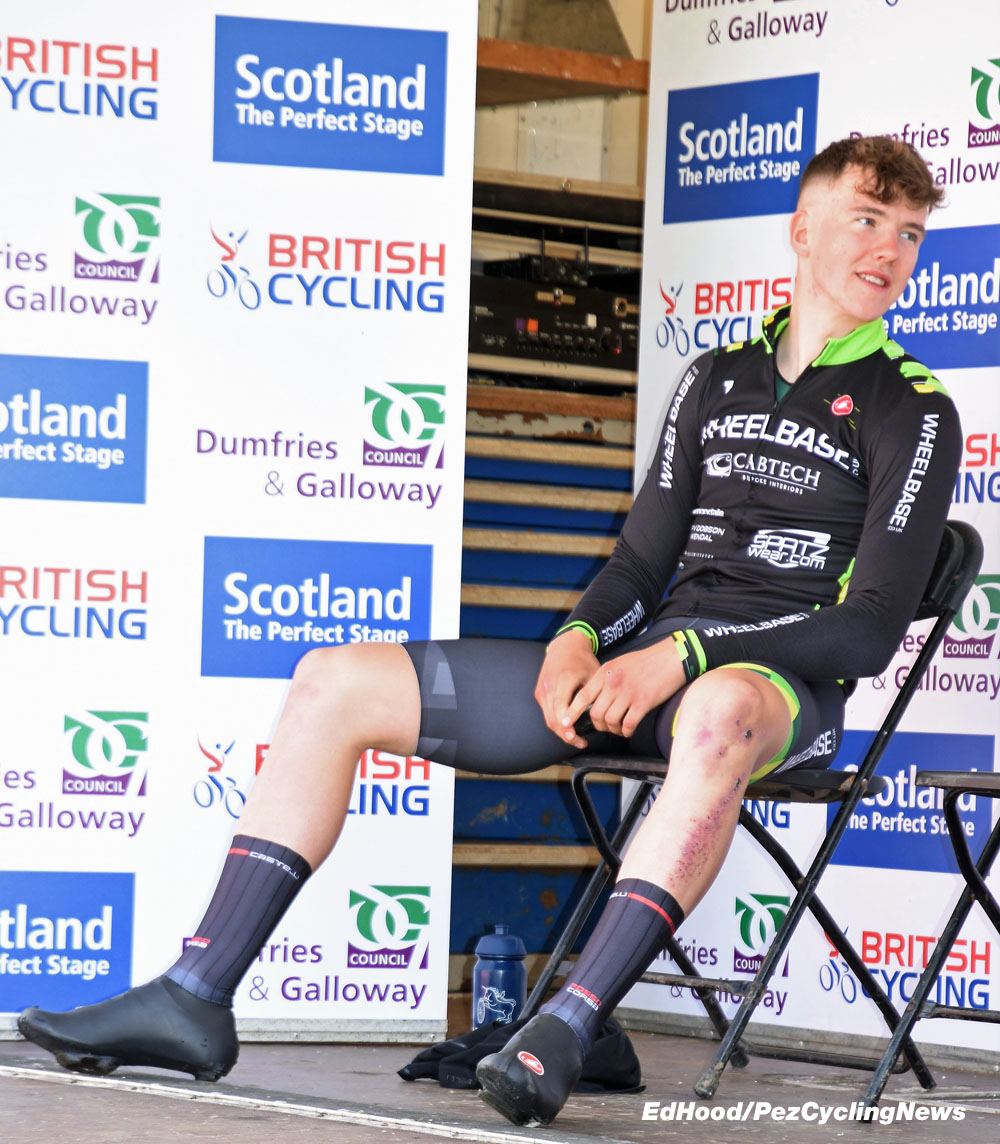 Hayter’s apart, ride of the day was Callum Thornley’s, we didn’t see him at the start, he was off a lowly fourth and not among the top seeds at the rear of the field where we did our snapping – so he kept that hot seat warm for a long time before Hayter took what was pretty much an inevitable win, given the form he’s been showing. 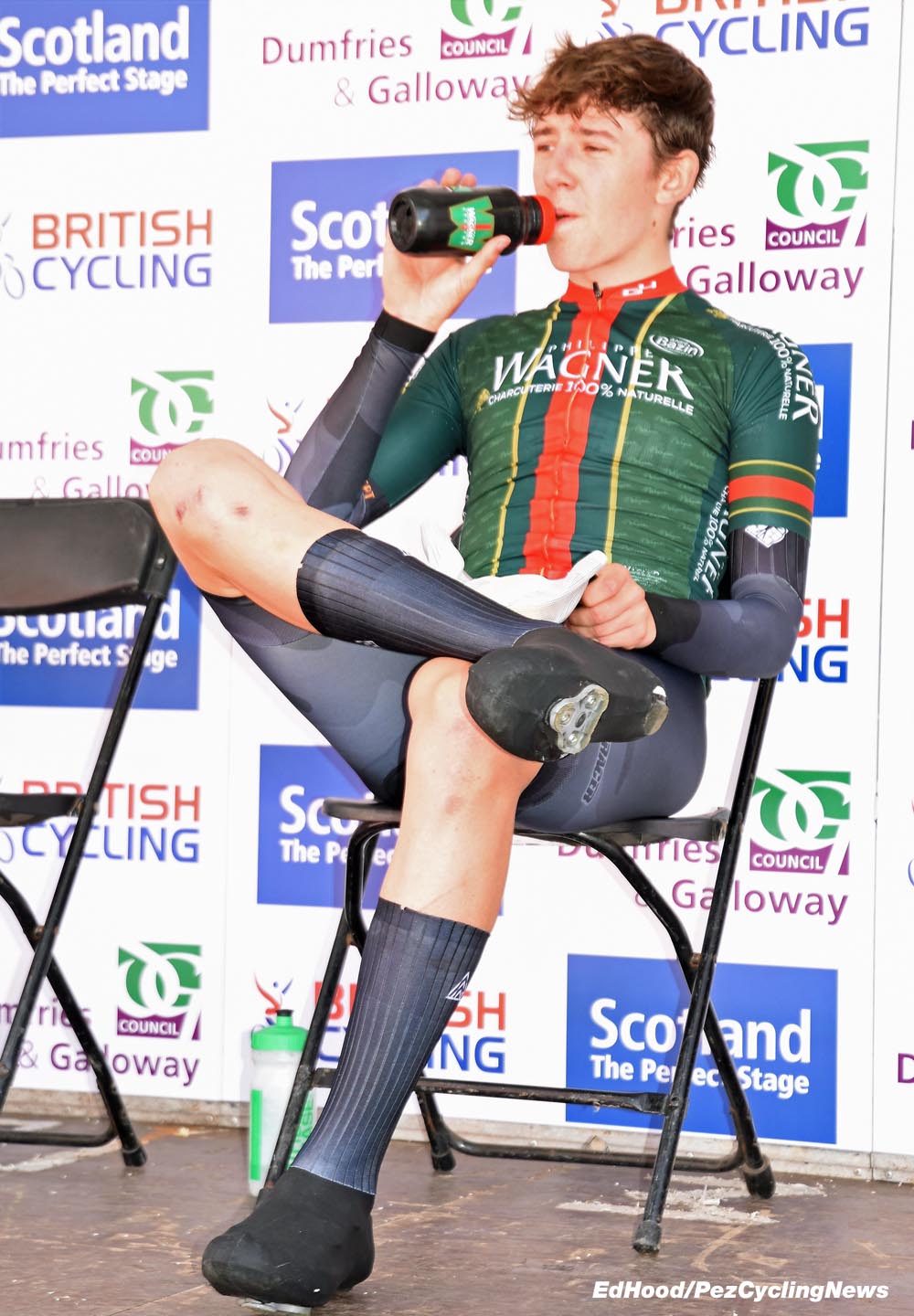 Another man who confused the seeding was bronze medallist, Charles Bailey who was on the start sheet as a ‘private member’ but rides for the French team, Philippe Wagner, a French maker of salted and cured meats and sausages which has sponsored cycling events such as the Tour Alsace. The palmarès websites don’t show a lot of results for the man but to take bronze in this company means he’s no slouch. He hopes his ride today will get him into the Chrono des Nations. 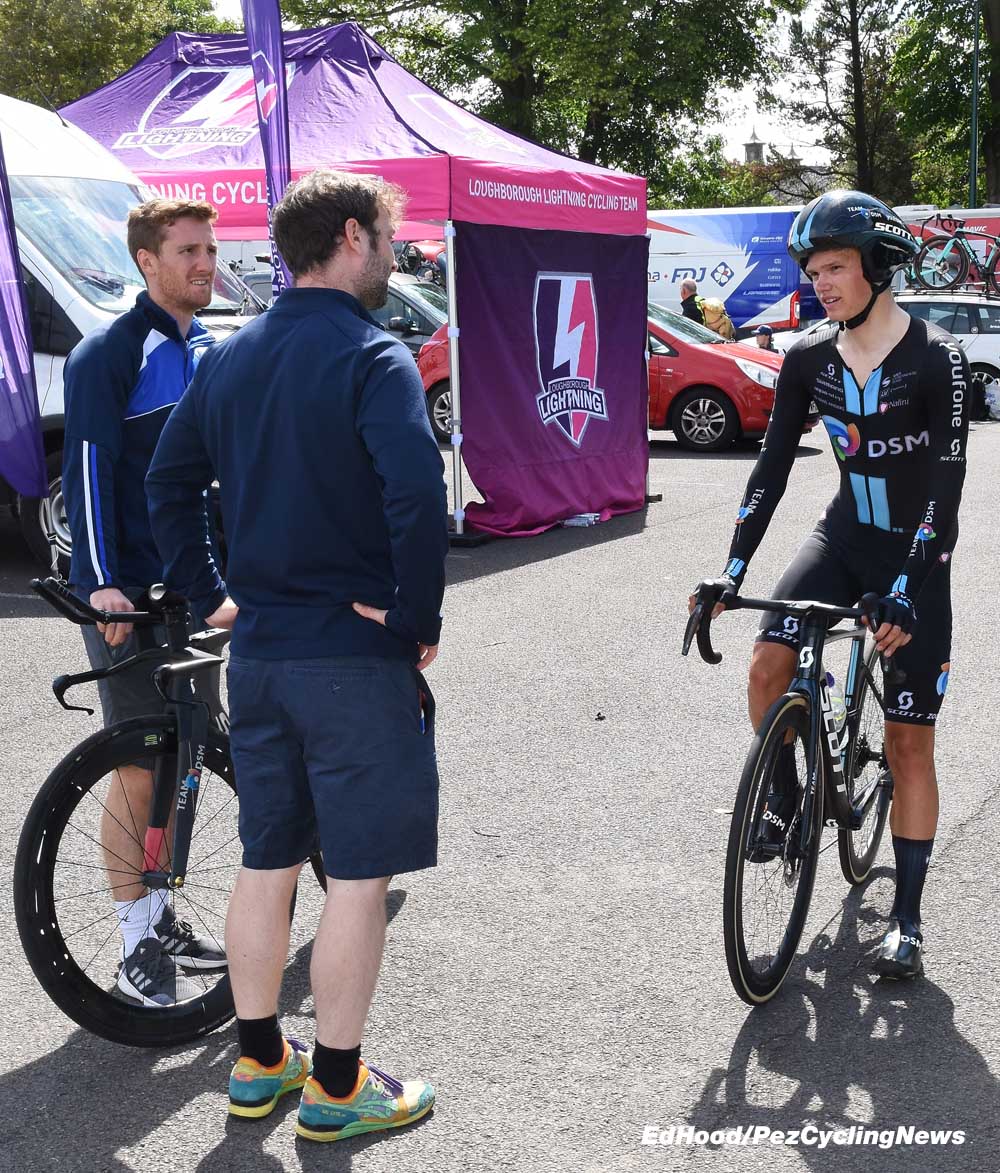 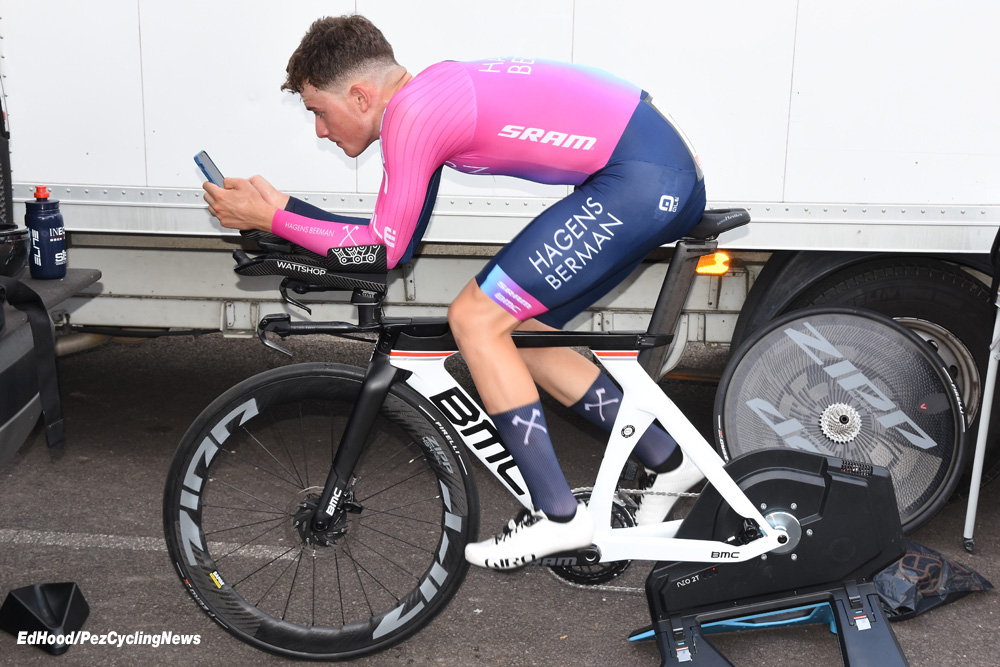 Back in my day you went for a ‘warm down’ on your road bike in the wee ring but now it’s on the turbo, with your smart phone, natch. We didn’t even have a phone in the house until the early 1980’s. . . 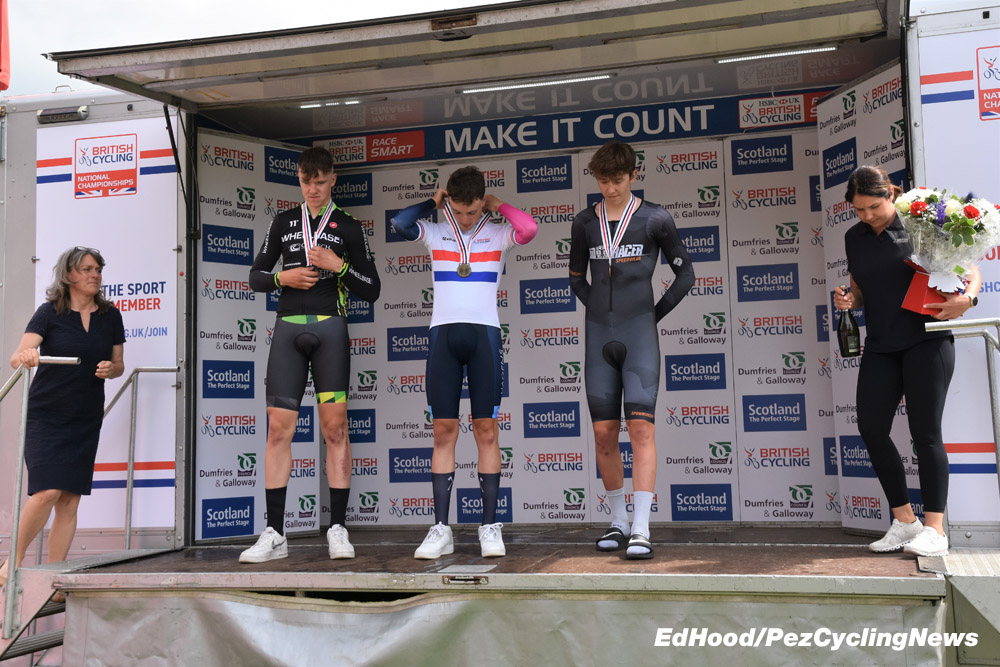 All that remained to do was take the podium snaps and look forward to the Elite race. 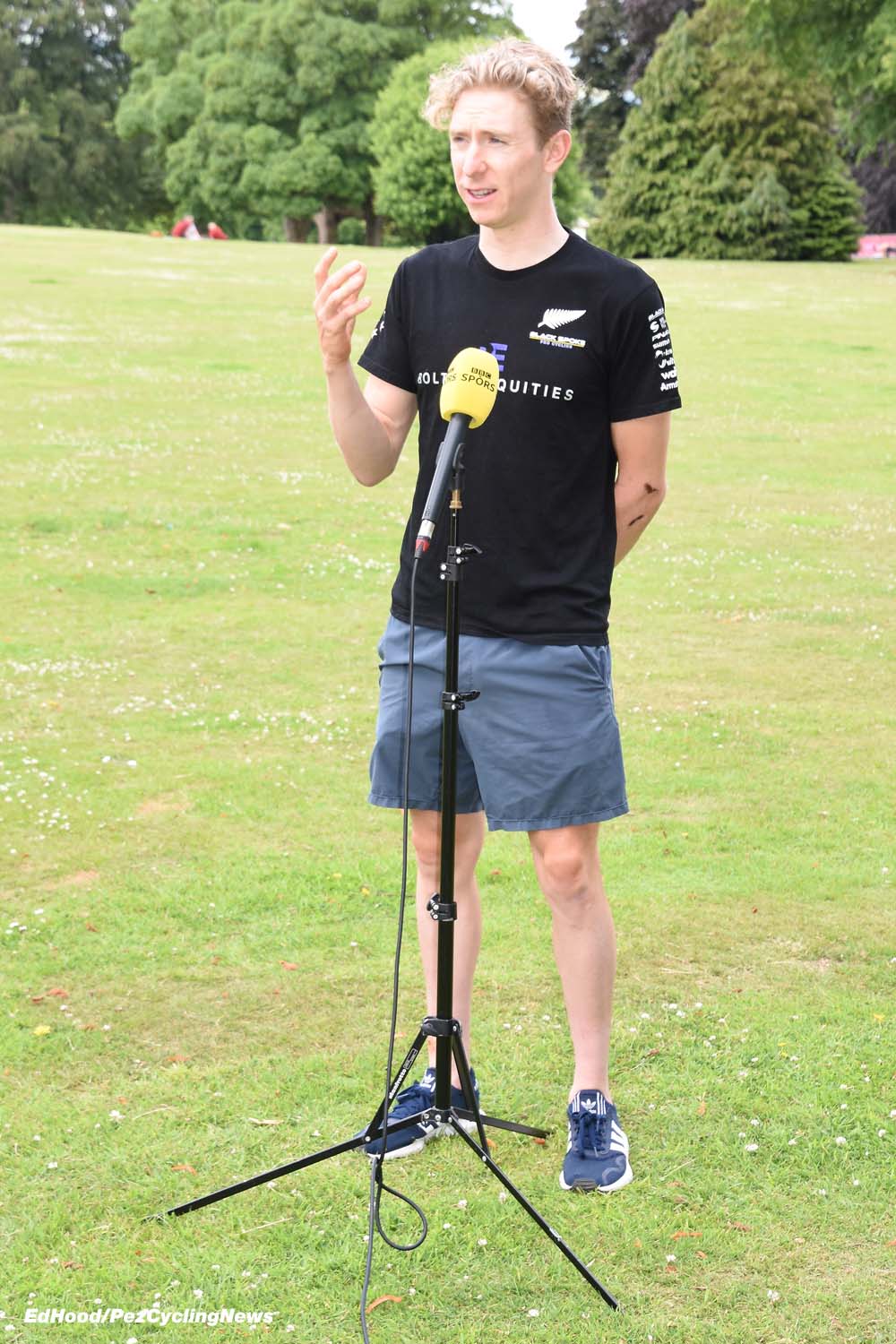 But what’s this? Scottish star of road and track Mark Stewart delivering his manifesto? No, just an interview with BBC Alba TV before it was his turn to face the time keeper in the Elite Time Trial.