Roadside PEZ: It’s the end of February and it’s cold, so Ed Hood must be in Flanders for his yearly trip to the Omloop Het Nieuwsblad and Kuurne-Brussel-Kuurne. As always ‘The Hood Gang’ had the full Belgian experience, cobbles, beer, bikes and those crazy Flemish fietsen fans.

That Nostradamus of the cycling world, our buddy Viktor tells us we should do something new and not just plough the same old furrow to ‘The Opening Weekend’ as the Belgians term it – Het Nieuwsblad and Kuurne-Brussels-Kuurne. But it’s in our blood now, we’ve been doing it for a dozen years and more now and 2018 was no exception.

We flew in to Charleroi on Friday night, diced with the crazies on the motorway north bound, parked up and headed for our fave bar, The Vivaldi – where the beer is always cool and so are the tunes. Surprisingly, none of us had hangovers and we were up bright and early to the Kuipke Velodrome on Saturday morning. 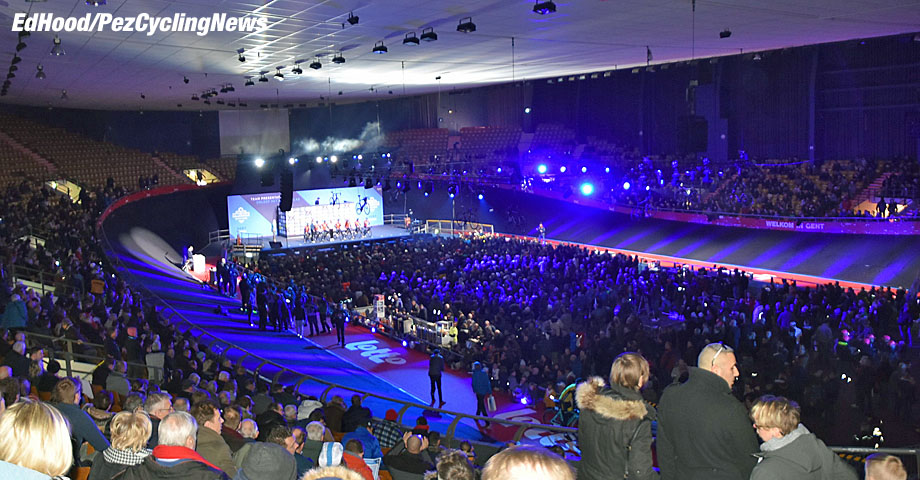 Maybe we’re old fuddy duddies but we’re not into the ‘new improved World Tour, Het Nieuwsblad’ with it’s glitzy presentation on the track – we liked it better when the buses lined up in the street and the fans mingled freely with the riders. For sure it was chaotic but that was part of the rough diamond charm of it all. 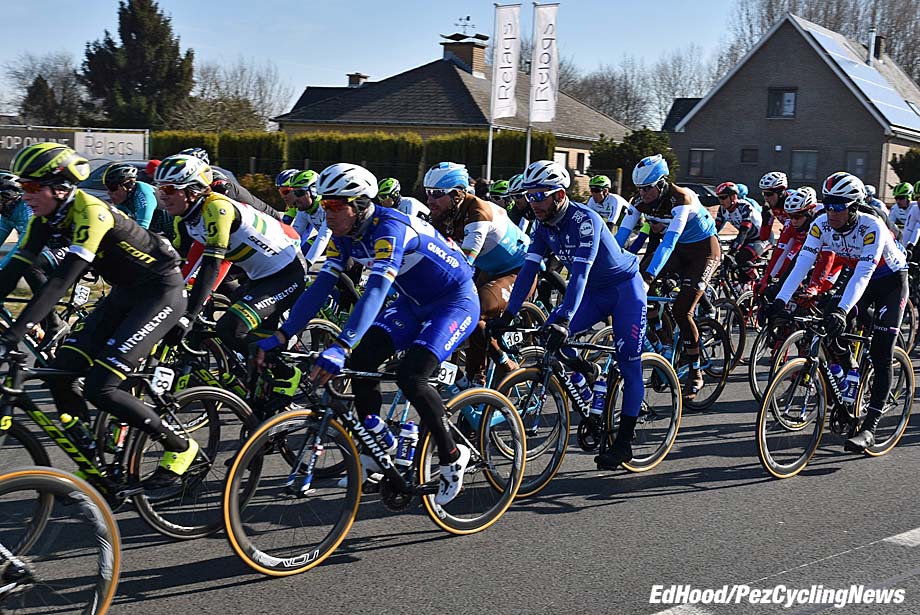 It was perhaps the coldest day I’ve ever experienced for a bike race with the stars wrapped up tight against the Arctic blast. If you had just returned from warm weather training you were going to suffer even more – here a well-insulated Phil Gil (Quick-Step Floors & Belgium) does his best to pretend he’s not frozen. It wasn’t a good weekend for the Belgian super team with zero to show for the weekend’s racing. Albeit they’d make some sort of amends on Tuesday, finishing first and second in Le Samyn with Niki Terpstra and Phil. 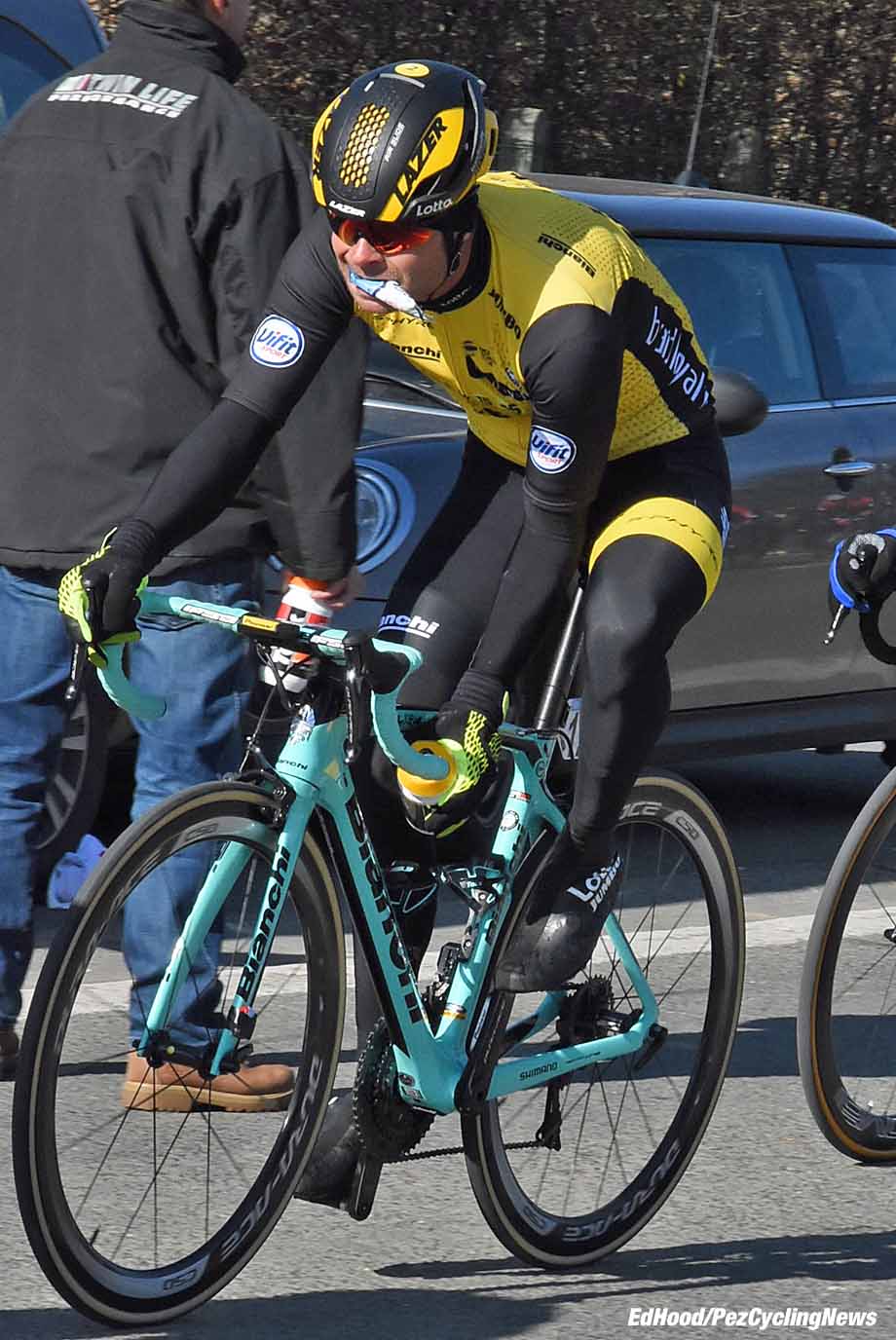 The soigneurs were busy handing up warm tea with the now obligatory gels attached; it’s a hard enough wrestling match on a warm day, never mind with frozen fingers. 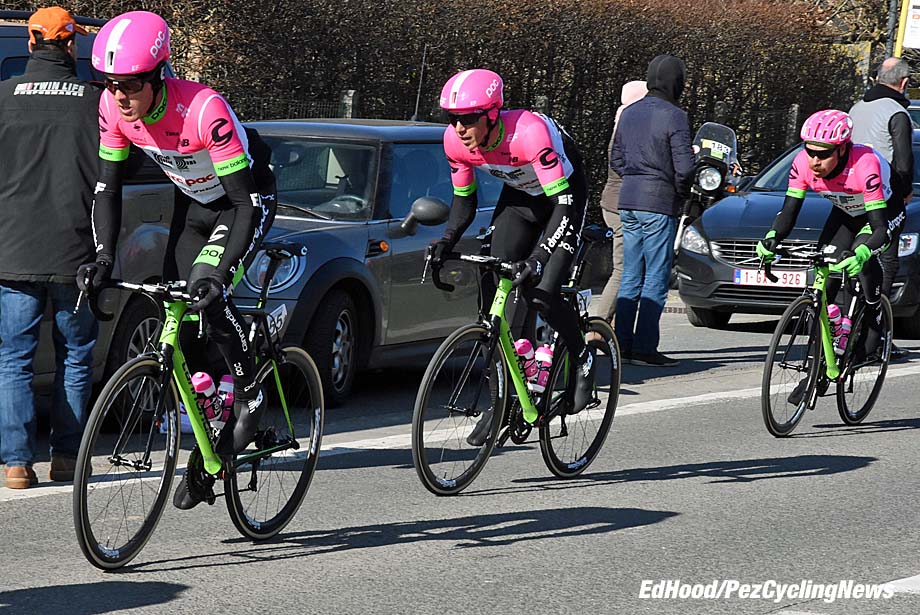 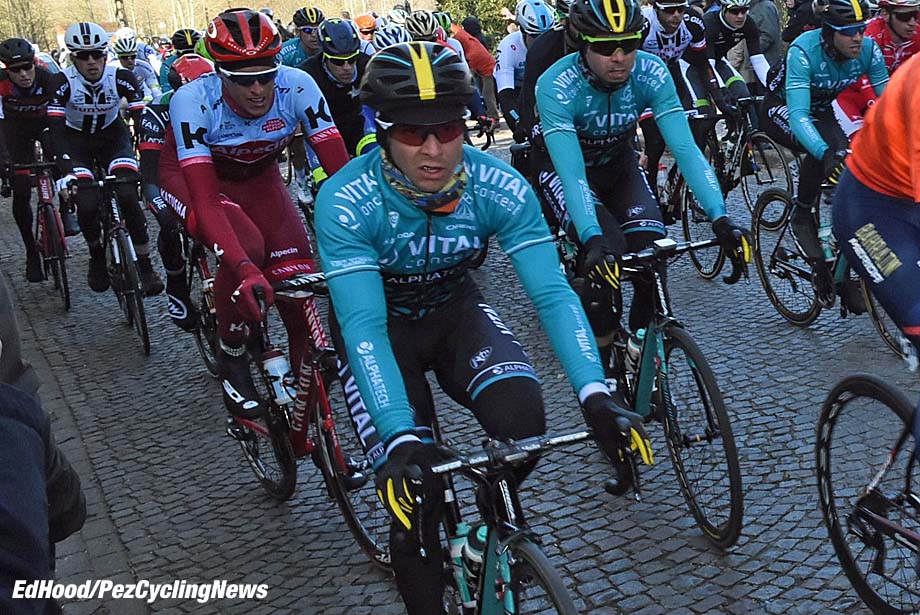 The 13 ‘hellingen’ don’t get any easier, especially on a day this cold; here little French sprinter Bryan Coquard (Vital Concept) hurts on the Katterberg – a long straight, cobbled heart breaker. 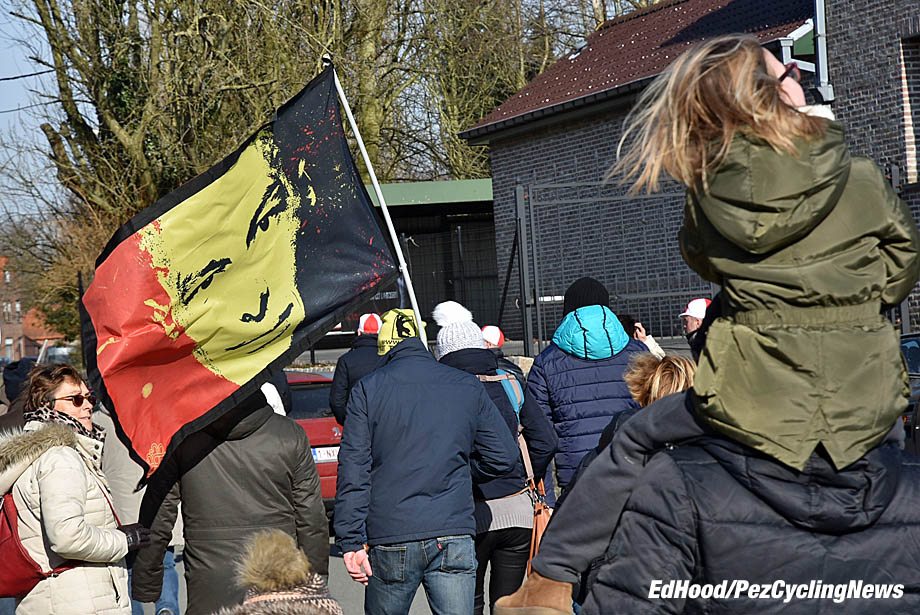 Belgian Champion, Oliver Naesen (AG2R-La Mondiale) kept a close eye on us at the end of the Haaghoek, a roller coaster, long cobbled sector. That Arctic blast didn’t keep the fan clubs away – quite the opposite. Naesen ‘honoured the race’ and his jersey, showing in the finale but couldn’t pull a result out of the fire finishing in 27th spot. 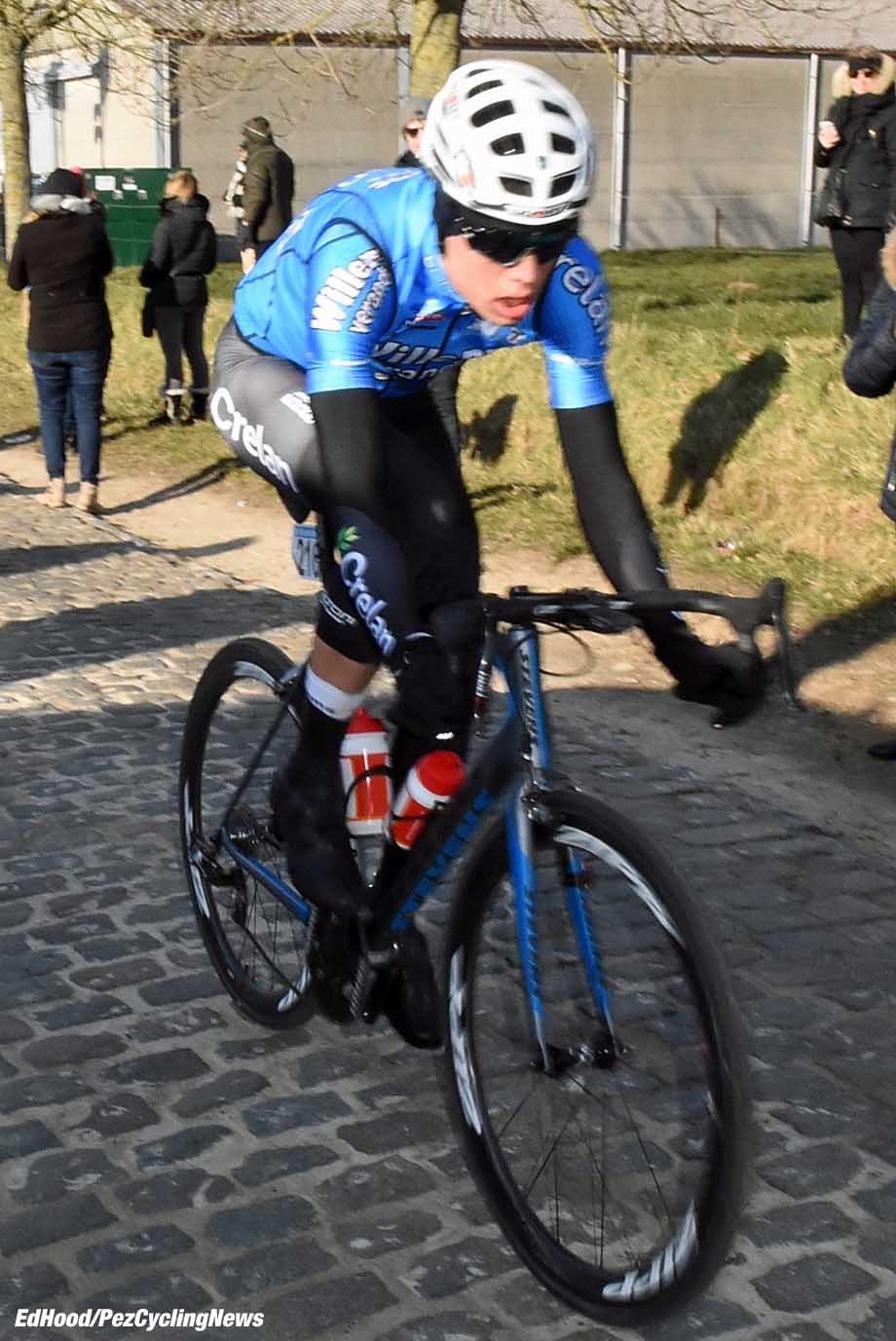 Belgium’s big hope for the future, World Cyclo-cross champion, Wout Van Aert (Crelan) rode a good race, aggressive and in the split which was only absorbed late in the day – he crossed the line in 32nd place. Already the Belgian Media have him down as a Paris-Roubaix winner; no pressure then.

Kuurne-Brussels-Kuurne is a much more user friendly affair with the buses lining up along the main road through the town and the riders mingling with the fans as they pedal to the sign-on. 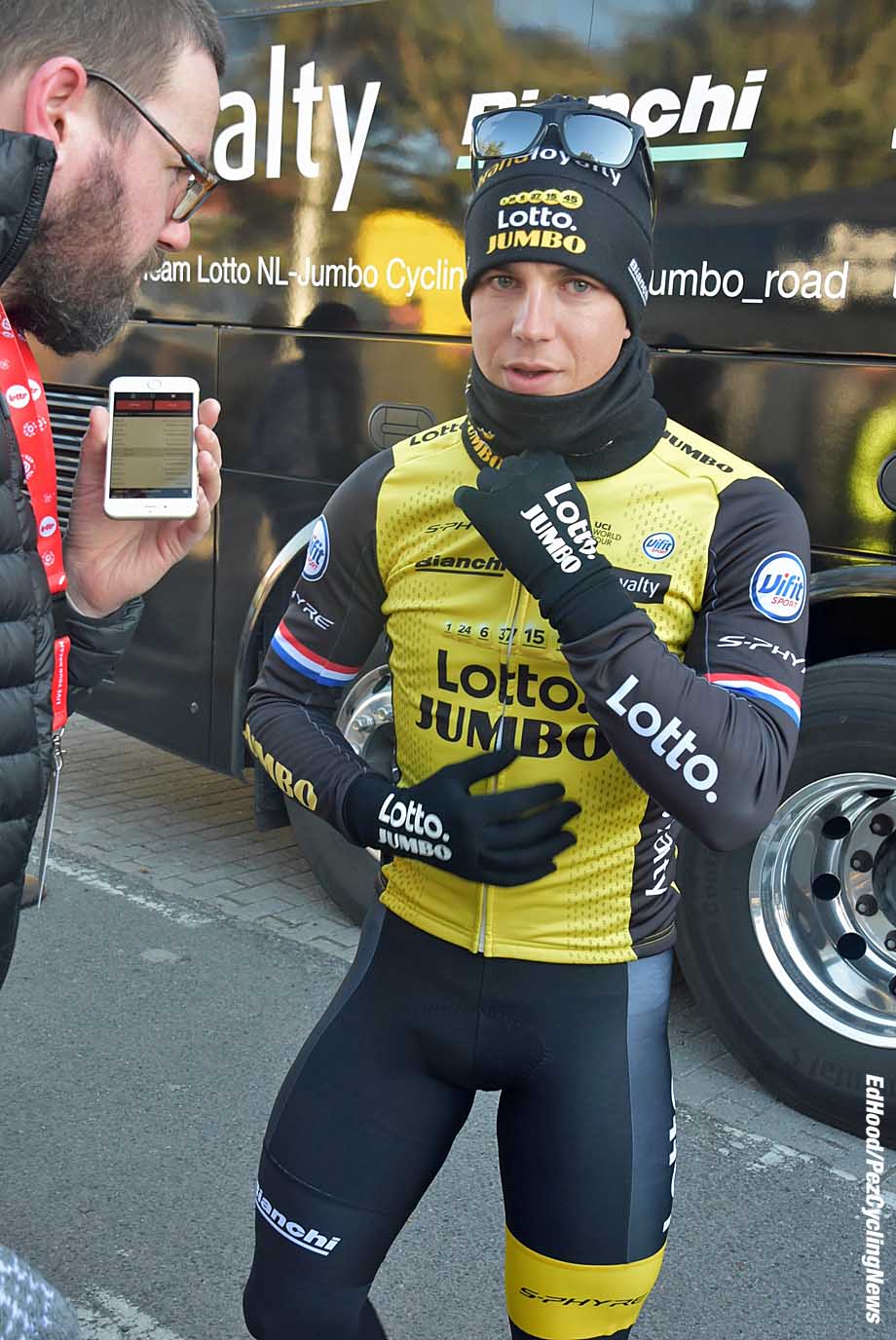 Eventual winner, Dylan Groenewegen (LottoNL-Jumbo & The Netherlands) cut a relaxed figure at the start.
His win was no surprise, he’d won three times already this season before Kuurne – and don’t forget that he won on the Champs Elysees last year. Is too The Primavera too long for him? We’ll know a Saturday or two from now. 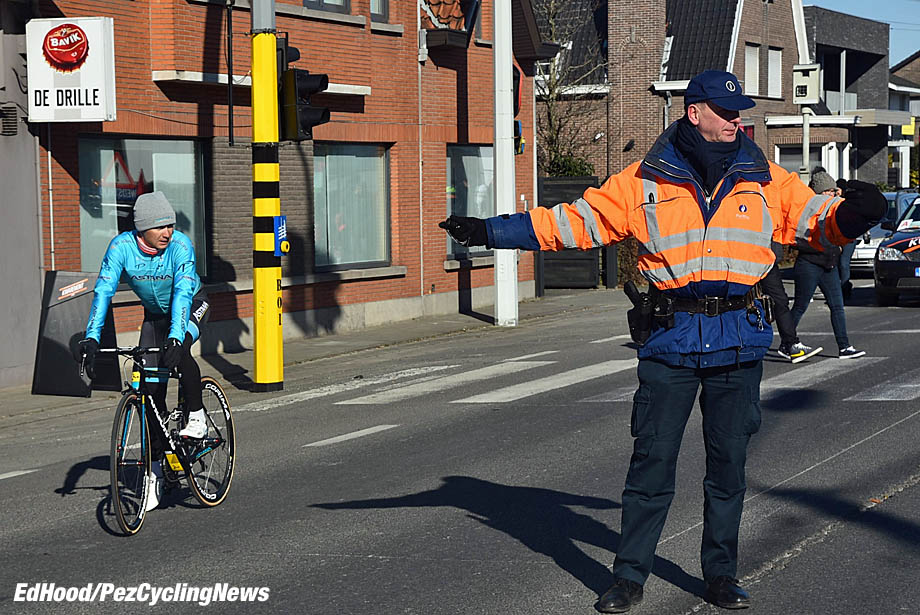 But even if you’re an Astana WorldTour rider you have to comply with the local traffic cops. 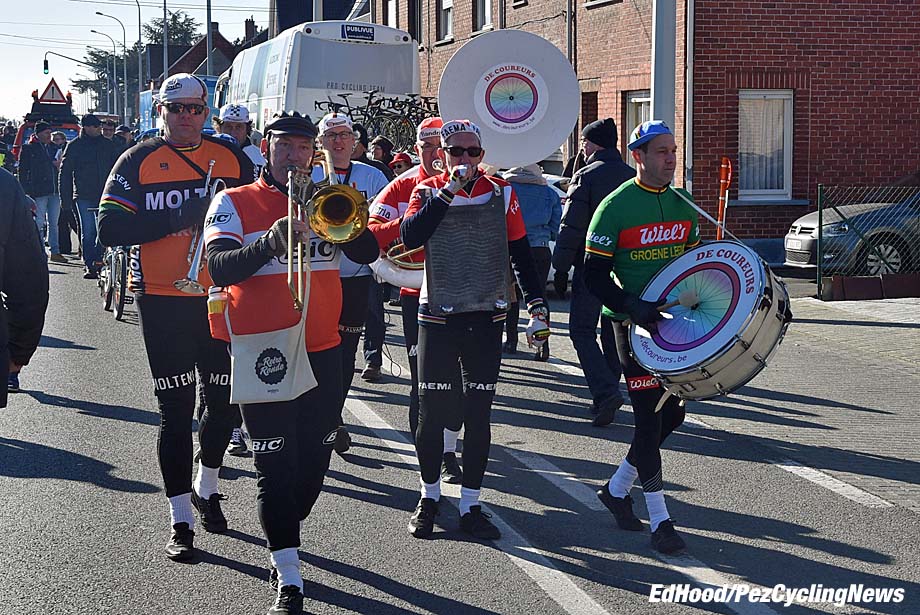 And at Kuurne there’s always the crazy band – De Coureurs who seemed oblivious to the cold. 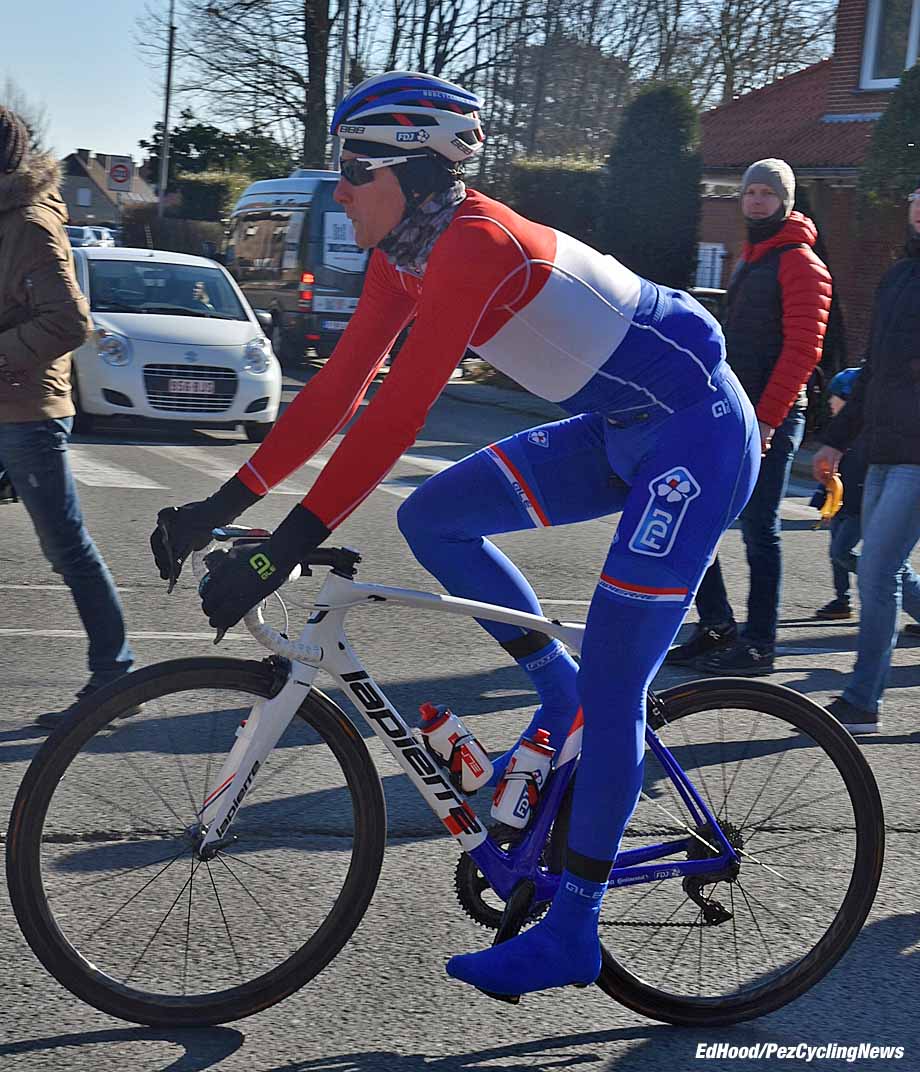 It gets a tad confusing at FDJ, they have French Champion and eventual second placed Arnaud Demare in blue, white and red but also Dutch Champion, Ramon Sinkeldam in red, white and blue. The riders pick their way through the crowd trying to avoid being nabbed for autographs. 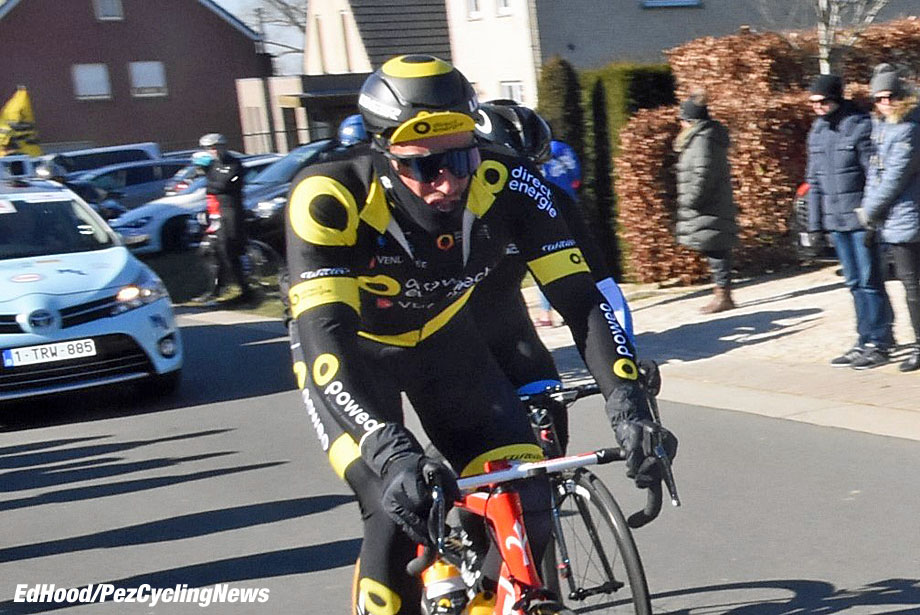 The morning was perhaps even colder than at Gent with some riders maybe taking the insulation a little too far to be flexible on their machines. 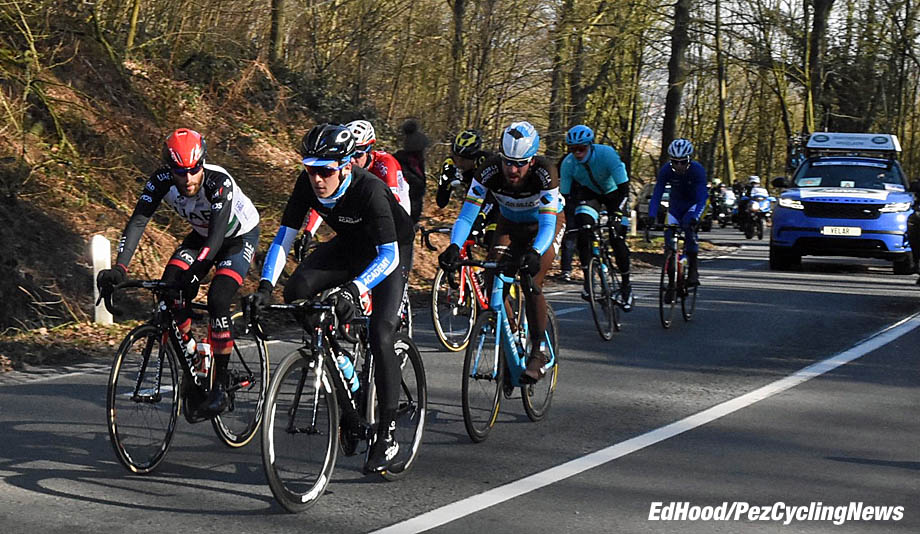 A well wrapped – and doomed – break tackles the Hotond Berg, the AG2R rider is Lithuanian strong man Gediminas Bagdonas who made the break of the day on Saturday and Sunday. Behind, the wick was being turned up as the positioning fight began for the horror that is the Oude Kwaremont. 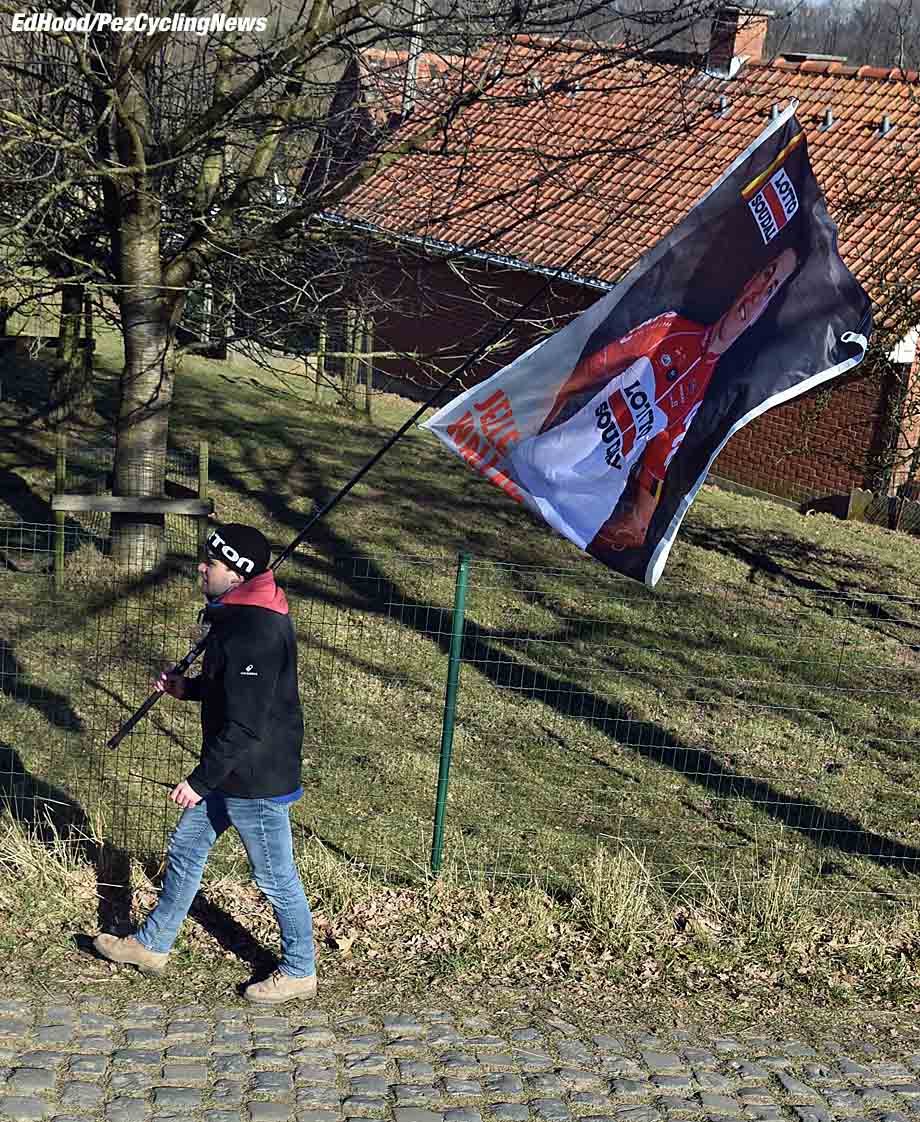 T-shirts and hats are all very well but if you’re a hard core supporter then you must have a flag – this one for Lotto Belgian, Jelle Wallays. 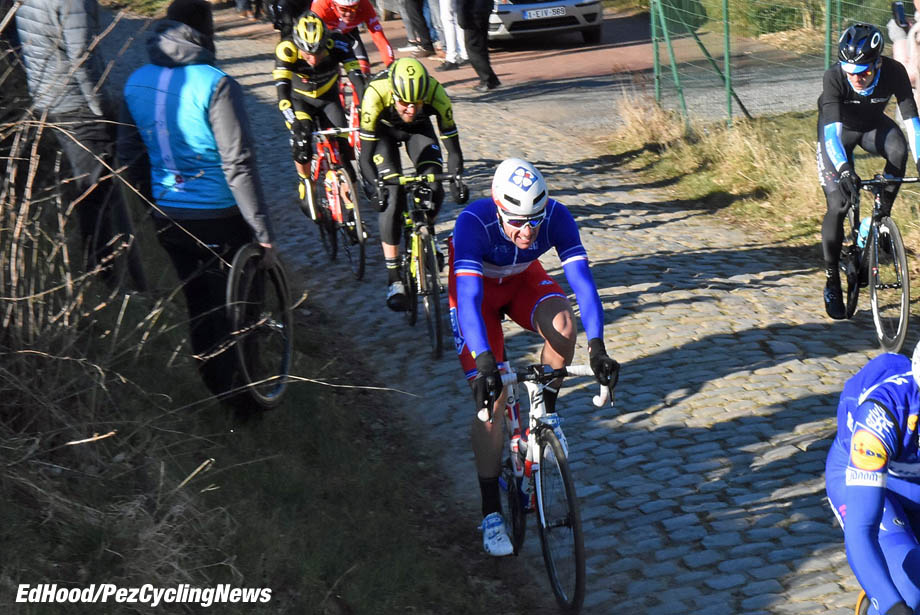 The Oude Kwaremont is rarely decisive in Kuurne being so far from the finish but it’s still a hellish test of strength and bike handling; the strongest try to be at the front so as not to have to engage in the brutal chase to get back to the sharp end of the race for the finish. Here, Demare battles his way over the top. 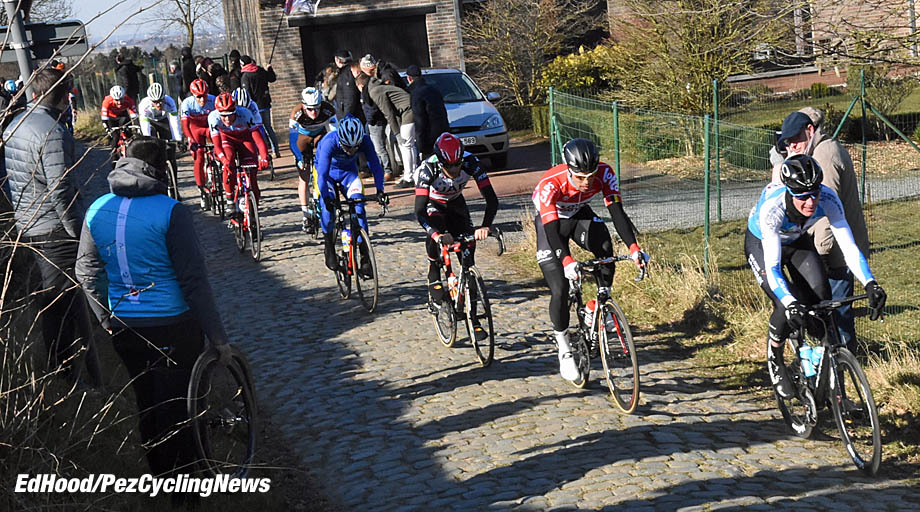 Some ride the crown of the cobbles – as you are supposed to – some seek the smooth but puncture-risking dirt in the gutter whilst others just get up any way they can. Groenewegen was in a class of his own in the sprint at the end with Demare lengths back and third placed Sonny Colbrelli (Bahrain-Merida) taking third even further back – he was eighth on Saturday so a good weekend for the Italian fast man. 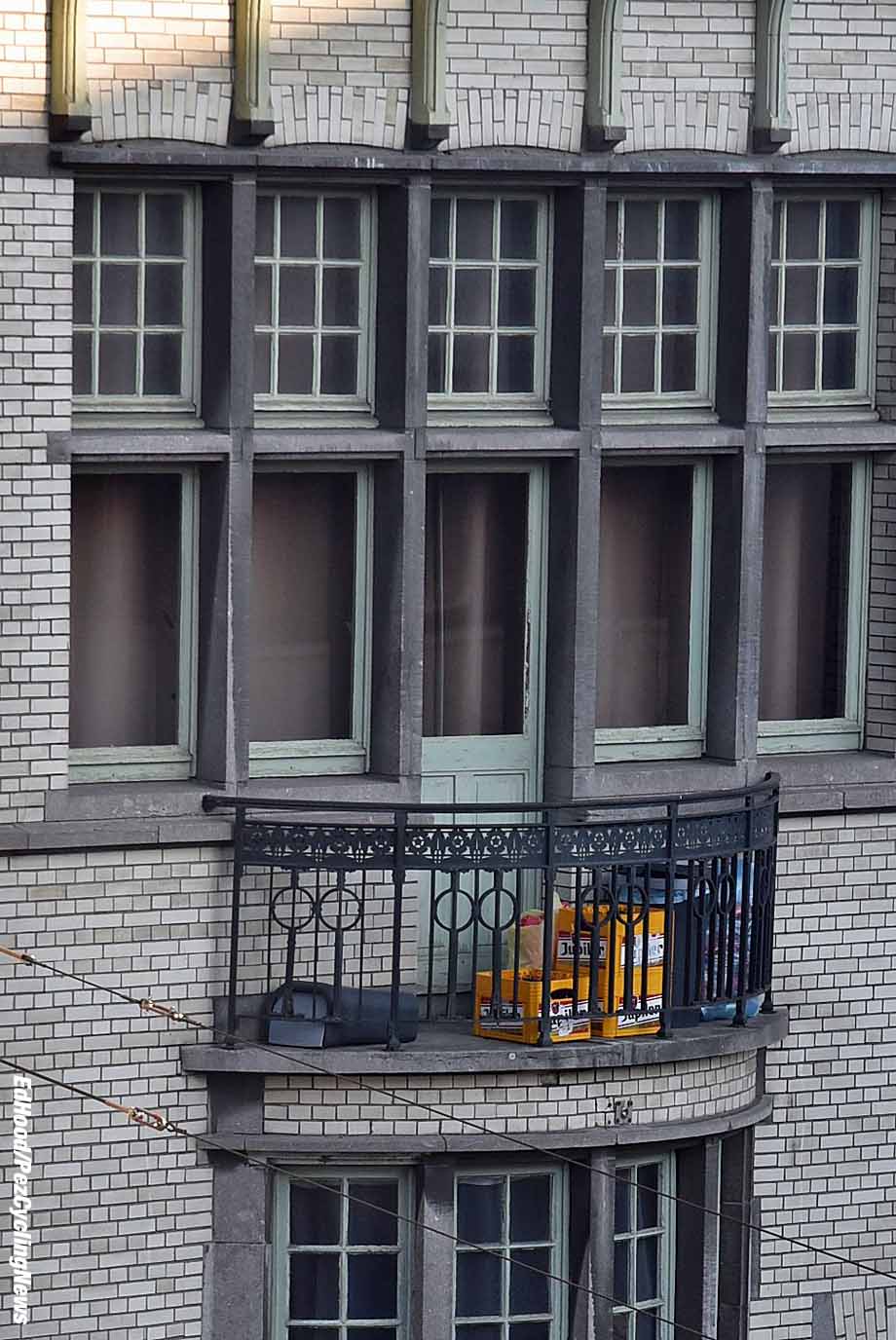 Monday morning – and the guy across the way was making sure his Jupiler was COLD. 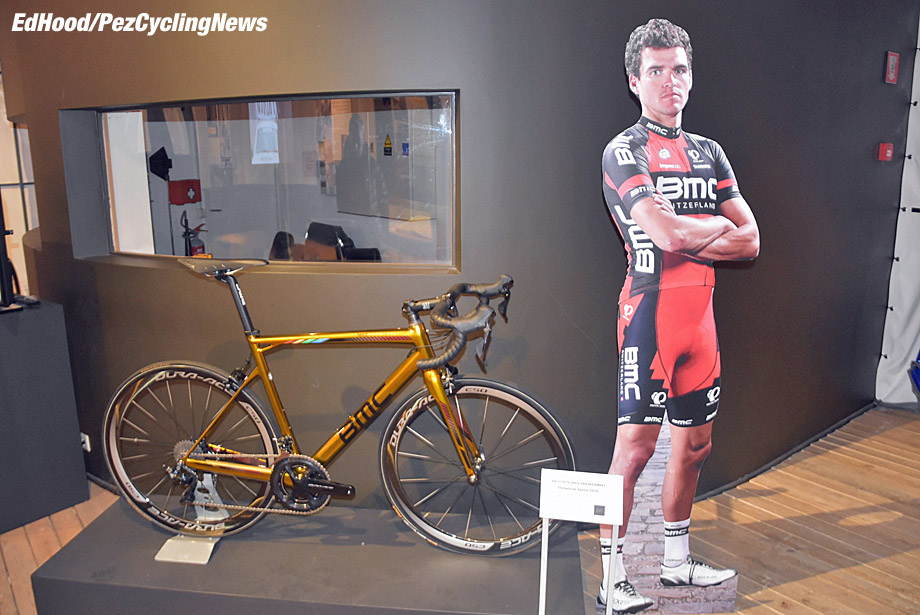 Monday is a quiet day in Flanders with many shops shut but we headed over to Oudenaarde and the Tour of Flanders Museum where Greg Van Avermaet was looking cool, much more so than he had done in the two races over the weekend. 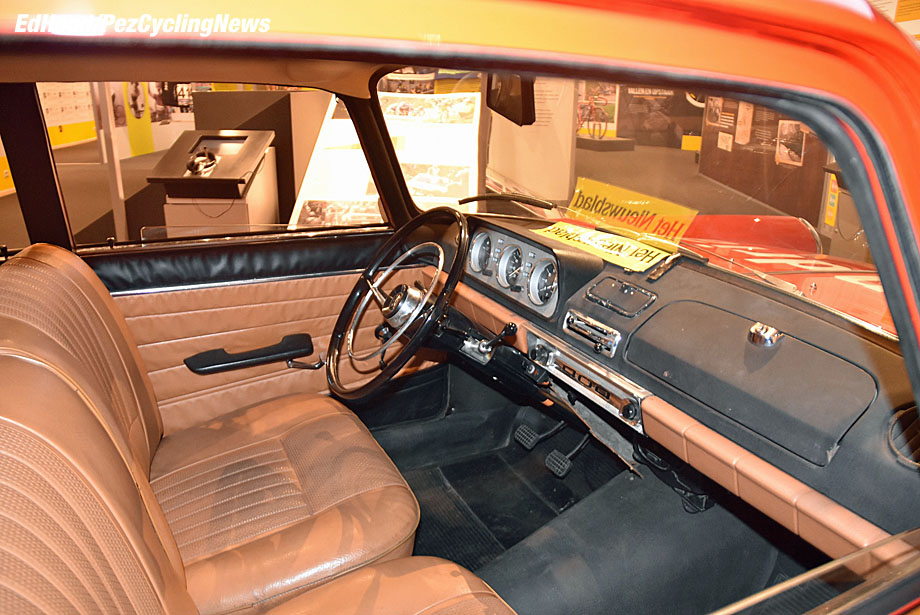 The old Flanders team car is still there; column gear shift – remember your dad wrestling with one of those? 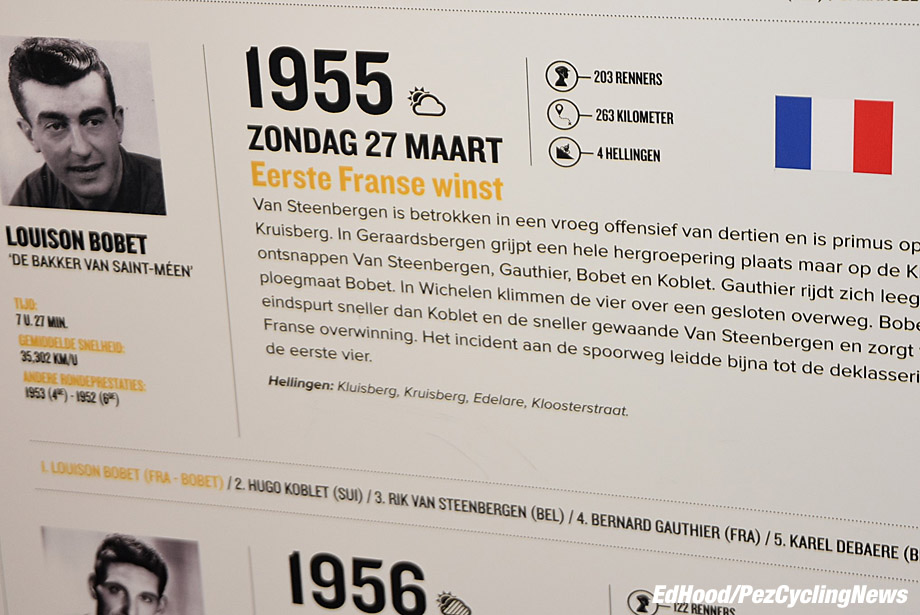 Who won De Ronde the year I was born? The late, great Louison Bobet, the first Frenchman to win – but with just four hellingen and 7:27 in the saddle. 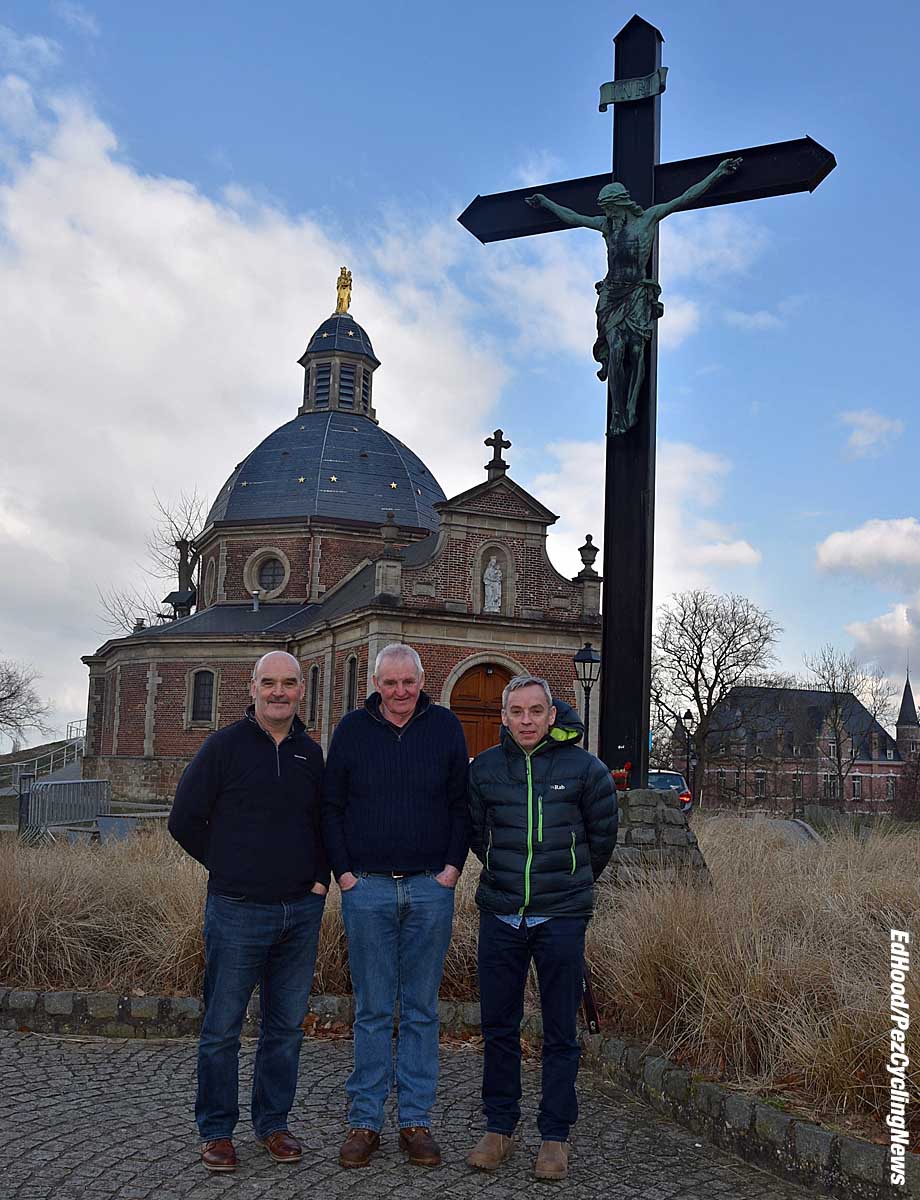 Our buddy, John had never been to the Kapelmuur – no sooner said than done. It was cold up there but beautiful – and special.

And it was almost time to head south back to Charleroi – see you there in 2019?