Roadside PEZ: The Tour de France sucks the life out of every other event in July, which is a shame. There are many good races and one of them, the RideLondon-Surrey Classic, has an amazing prize list and one of the most historic back-drops on the WorldTour. London’s Mall, Buckingham Palace and Admiralty Arch are the equal of the Champs-Élysées, Eiffel Tower and the Arc de Triomphe. Callum MacGregor was there to take in all the fun of ‘The Big Smoke’.

The omens were good when I arrived at my accommodation for the weekend on Clapham Common. The sound of The Jam wafting across from the Common, with Bruce Foxton the sole remaining member of the original line up keeping the music alive at the ’80s revival festival.

I was down to see the sixth edition of the only single day WorldTour race in Britain, still described as part of the 2012 Olympic legacy. It was I thought always likely to suffer from the date clash with the final day of the Tour de France especially given the outcome. There would be no Geraint resplendent in maillot jaune to delight the home fans. A week later and this race would have been an incredible homecoming for the Welshman. However with the richest prize list of any single day race in the world topping out at €100,000 for both the women’s and men’s elite races the Pru were guaranteed some of the world’s top riders who hadn’t either started or survived Le Tour.

The prospect of a great payday and 300 UCI points for the winner had Greipel, Cavendish, Mathews, Ewan and former winner JP Drucker turning up at Horseguards Parade along with another 150 riders, ready for the off on Sunday lunchtime. Le Tour; for those that had ridden in France it was consigned to history and thoughts were on the road ahead, like any self respecting pro who could smell the €32,000 first prize. Clearly up for it was the days eventual winner Pascal Ackermann, Bora-hansgrohe who along with his team mates were looking slightly pensive perhaps due to the threat of rain at the sign on. 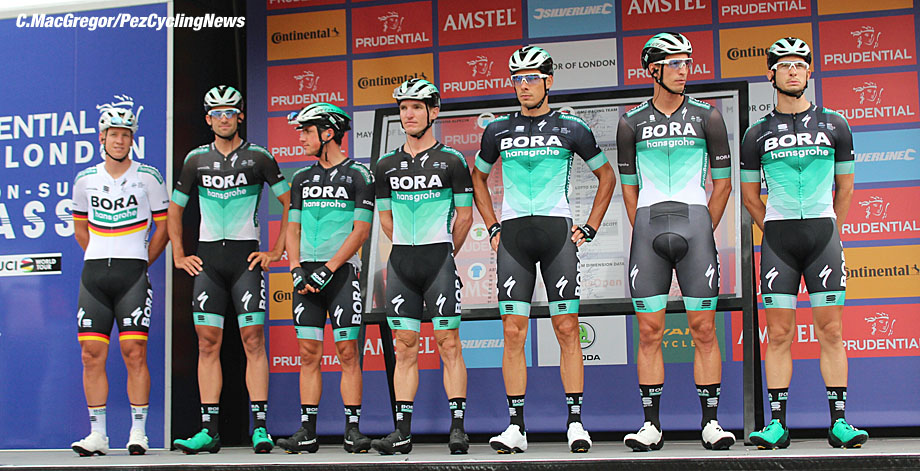 BORA-hansgrohe looking serious being introduced to the crowd, they would have thirty two thousand reasons to smile at the end of the day 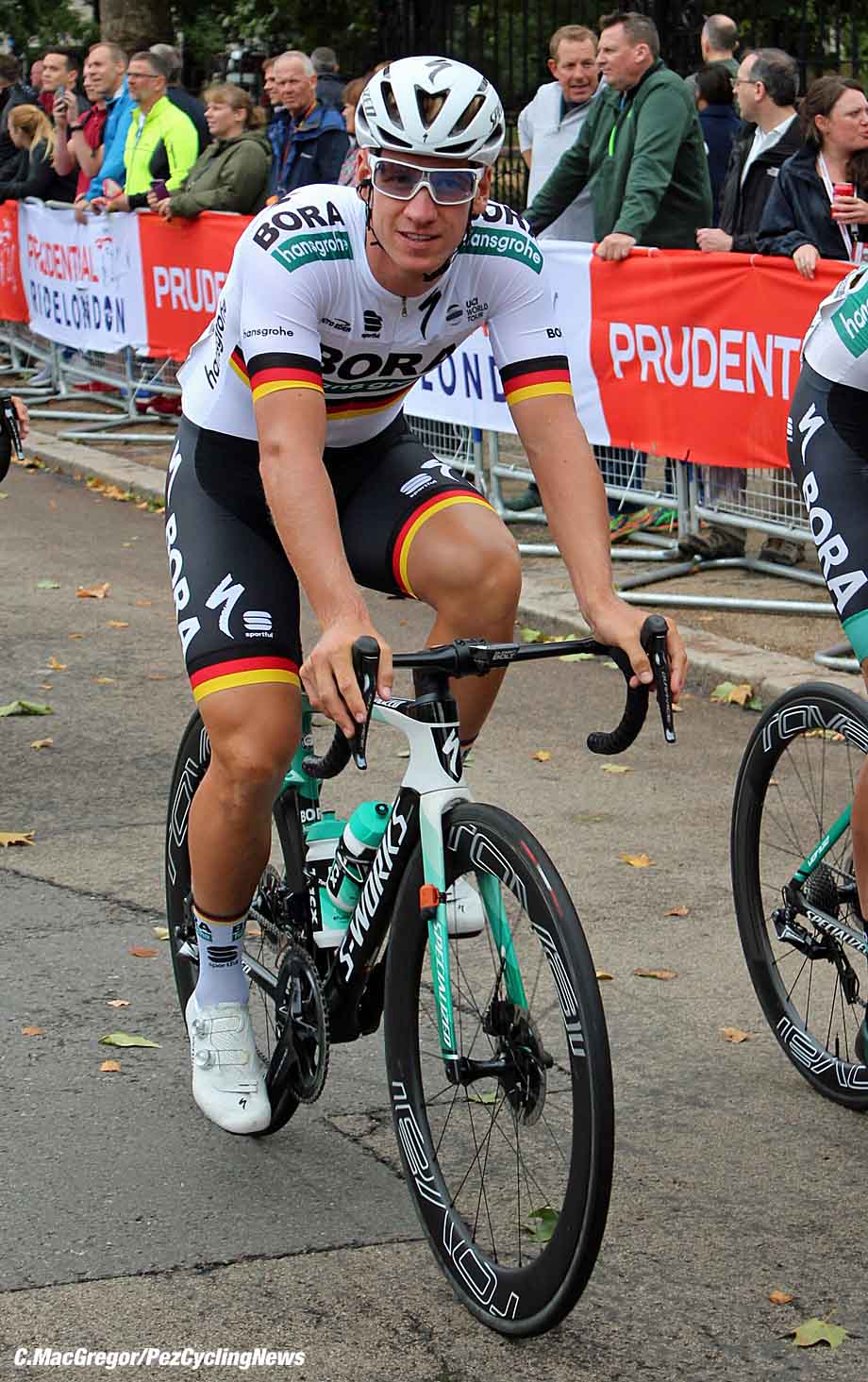 Pascal Ackermann resplendent in his German champions kit before the off

I couldn’t help myself and worked out that the winner of the Classique would be racing 64.8kms with the winner getting €25,000. That’s almost €386 per kilometre. This as compared to the 187 kms of racing for the Classic where the winner receives, as I mentioned, €32,000. A mere €171 per kilometre. Good money either way, if you can get it and rates than even a London cabbie would turn out for.

Sunday morning was wet early on and with more threatening clouds overhead as I set off. Arriving in central London I wander around whilst the Sportive riders skirt Trafalgar Square, pour through Admiralty Arch and ride on to the Mall with the backdrop of Buckingham Palace as they finish their chosen event. 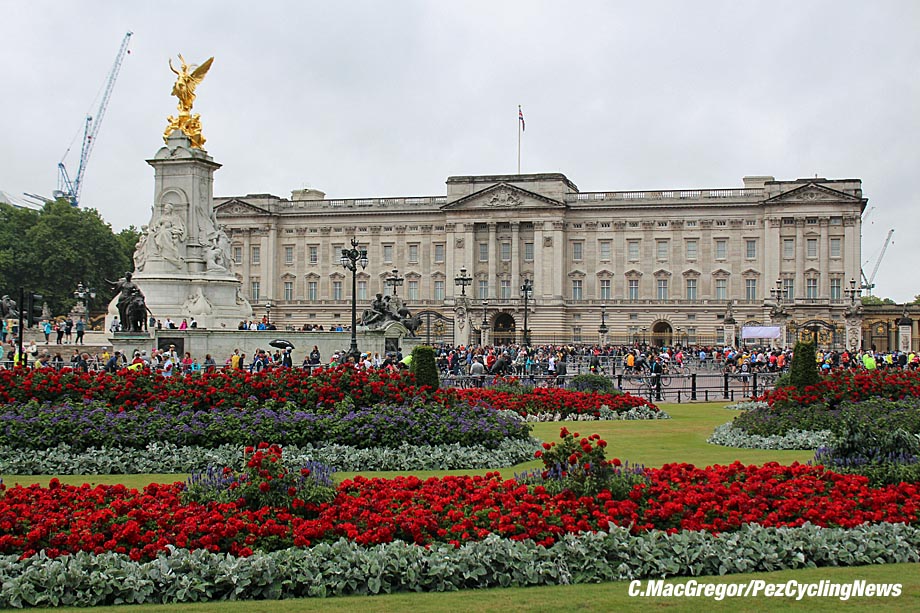 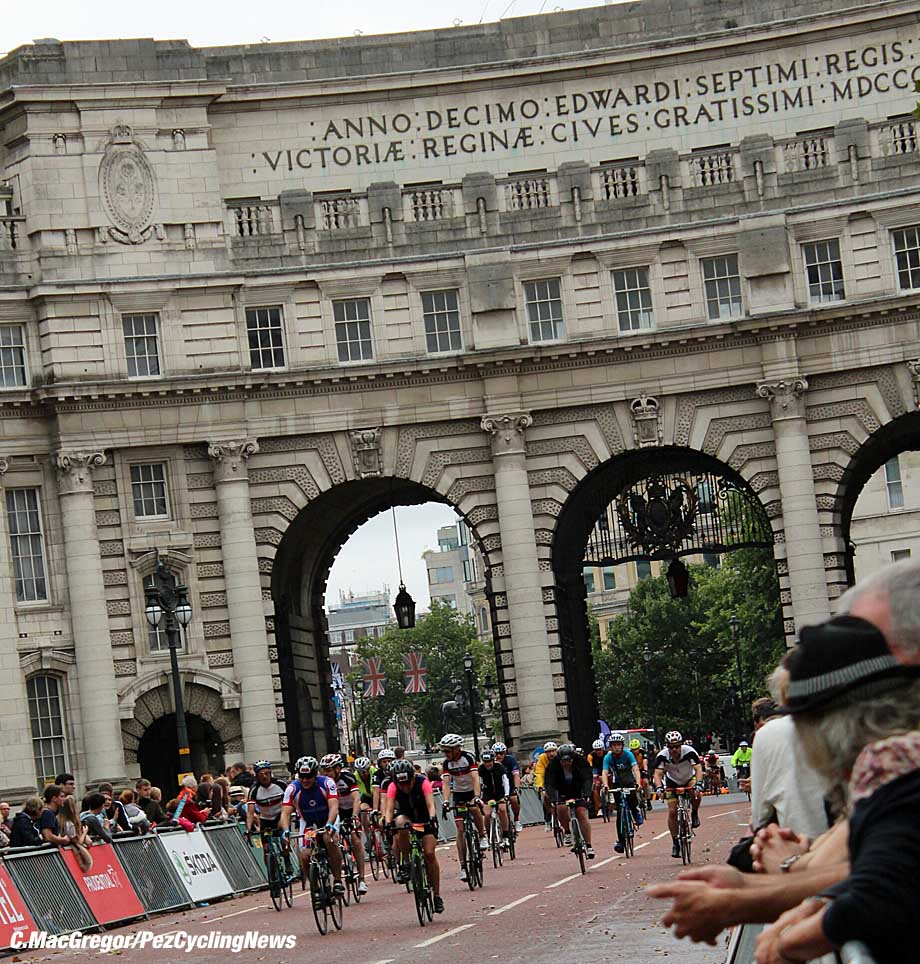 Spirits lift as the finishers approach the line. Some stopping just short to be congratulated by loved ones before the final few metres to the finish. 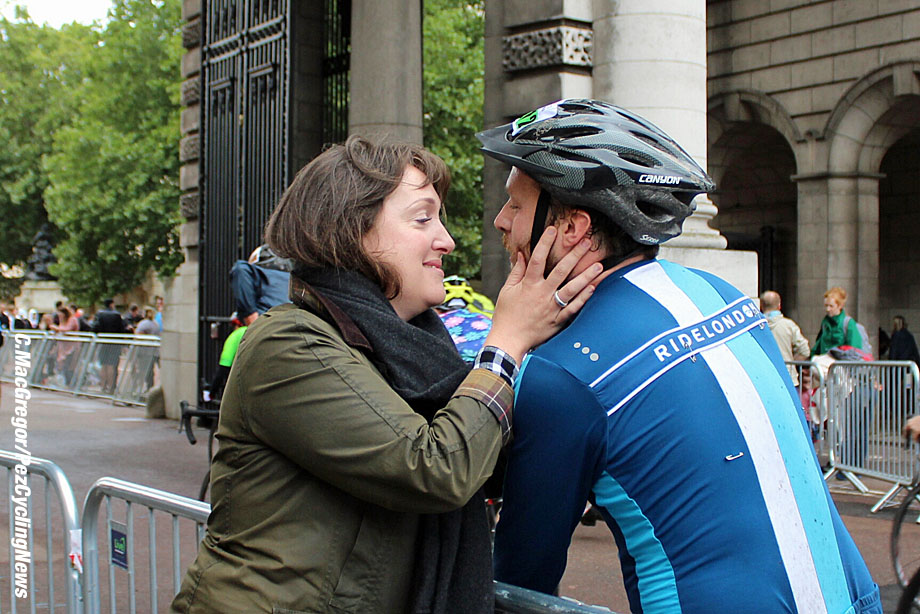 My hero, only a few hundred metres to go

There are all shapes and sizes competing and completing the distances of nineteen, forty-six and one hundred miles. In total 26,720 participants completed their day out. Sadly Nigel Buchan-Swanson was not one of them, suffering a cardiac arrest from which he didn’t recover despite the efforts of the medical people at the scene. Our thoughts go out to his wife Deborah and their three children.

As an experienced cyclist I’m sure Nigel would have appreciated the hand cycles competing, which must be the most aero machines out there today. Not sure I would ride one when the roads aren’t closed though or indeed uphill. 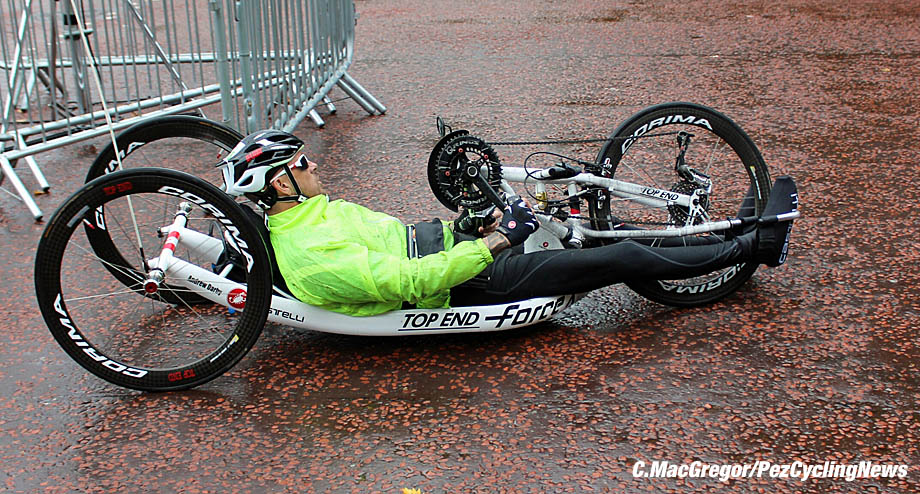 I tag along with a posse of photographers heading for the rider sign on. The sign on at Horseguards Parade is steeped in history and the memorial to the fallen of the Household regiment stands guard over the proceedings. 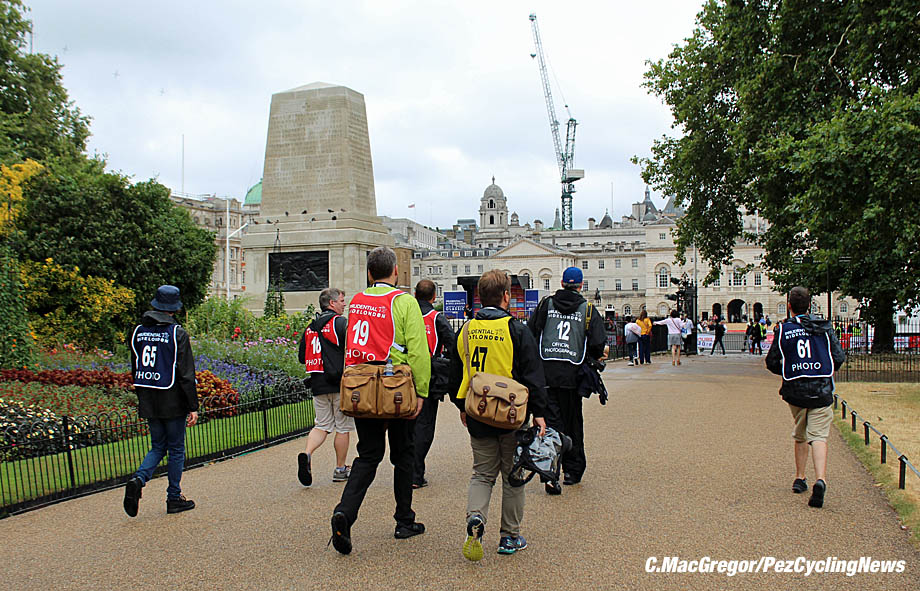 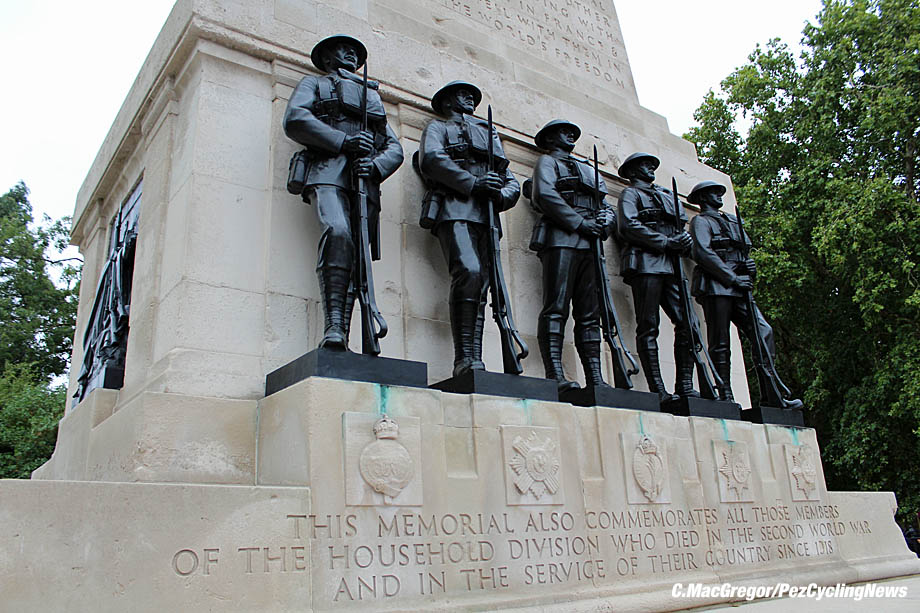 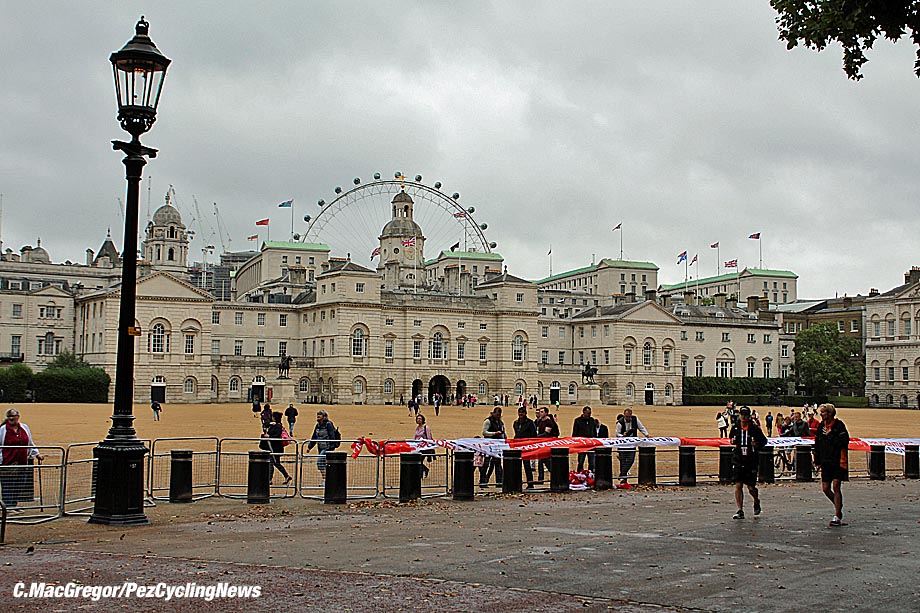 The threat of more rain kept the crowds away this year. Horseguards parade with the London Eye in the background

Teams appear and for many it’s a relaxed start to the day, there might be a rich purse but the chance to catch up with old friends distracts from the battle ahead. 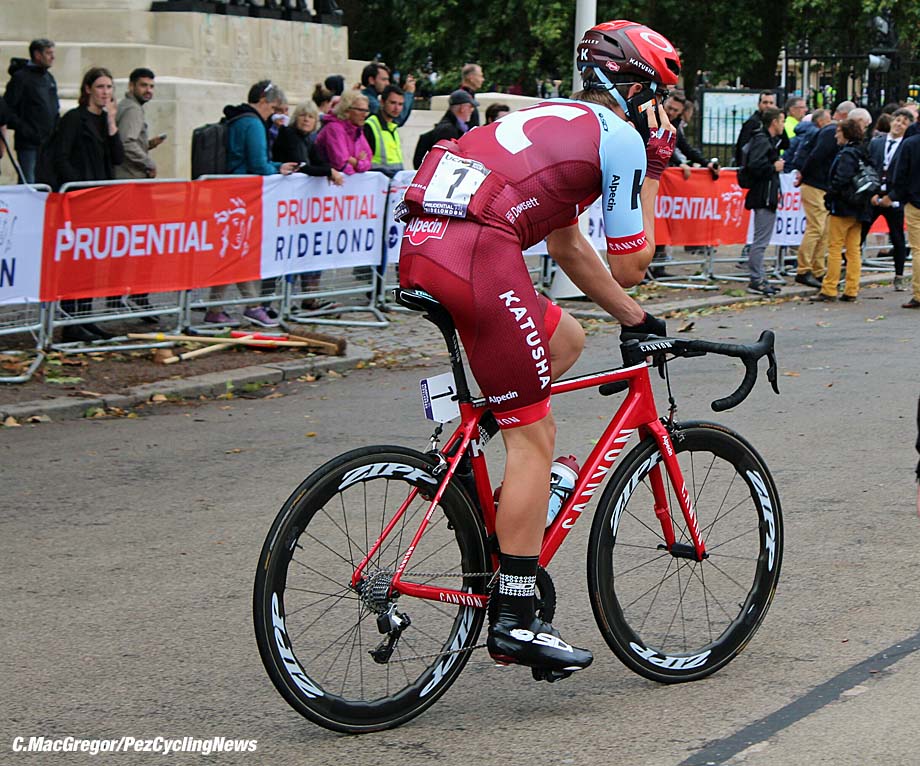 Alex Dowsett getting some final words of advice on team tactics before the start?

The teams appear, sign on and depart, the legs on these guys are something else and I include a few shots where you can try to identify the star.

Spot the legs of “The Gorilla” Andre Greipel! 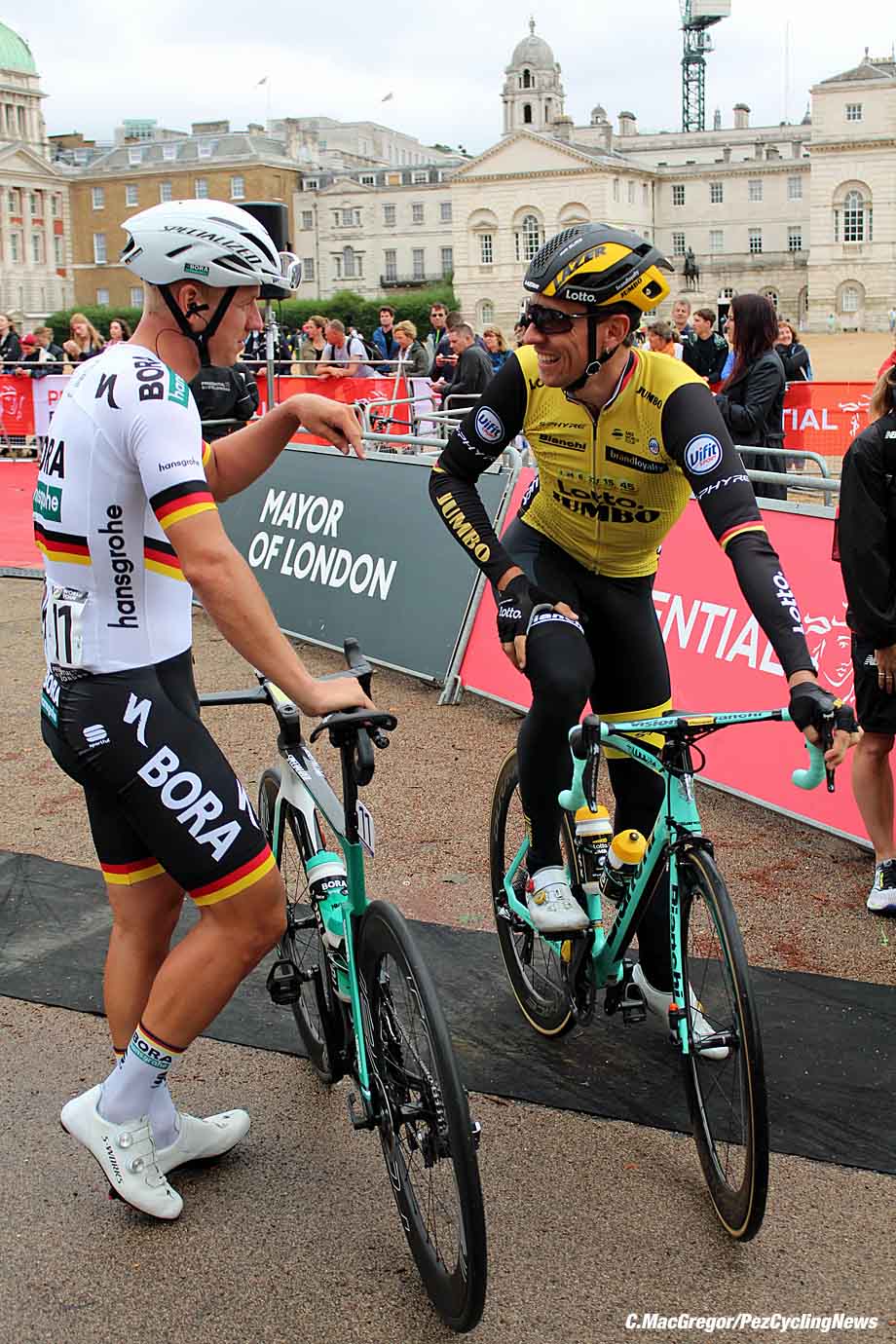 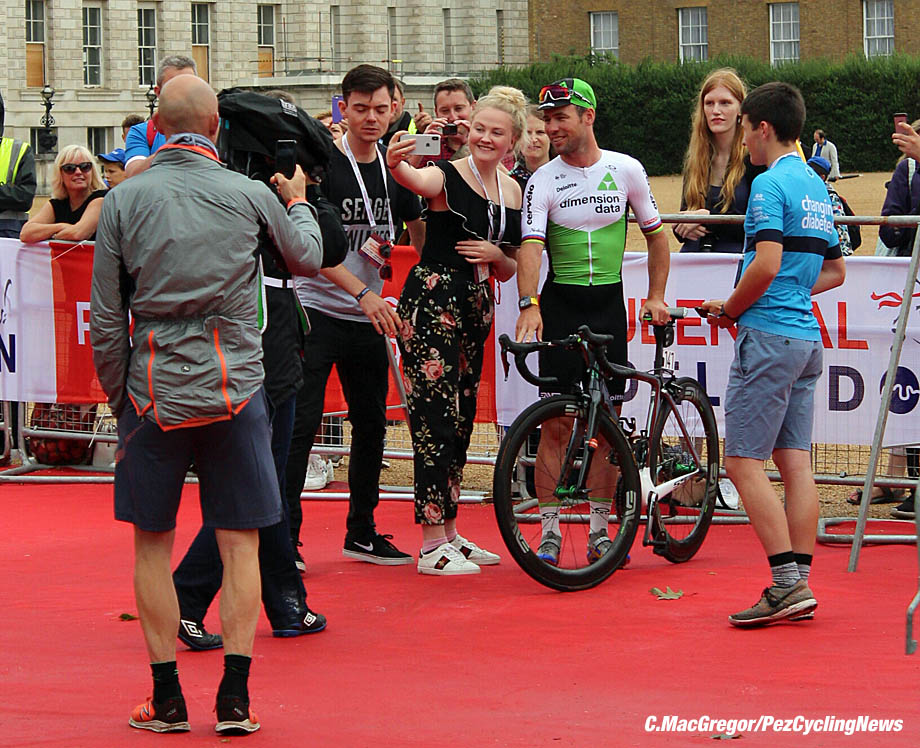 The sign on offers a great opportunity to grab some pics of the stars and the race has the feel of a sprinters day despite last years winner Kristoff missing and as it turns out taking the prestigious final stage of Le Tour in Paris. 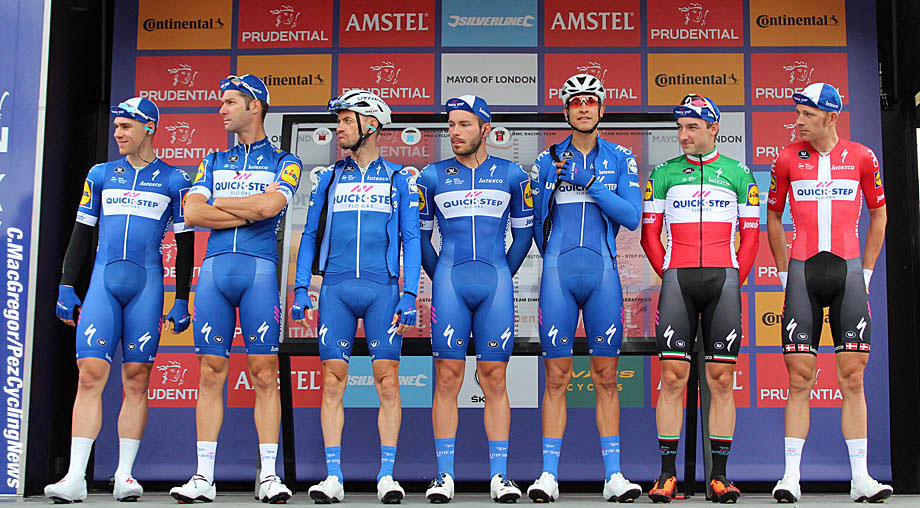 Quick-Step Floors, a team with a long tradition of winning, but it wasn’t to be today 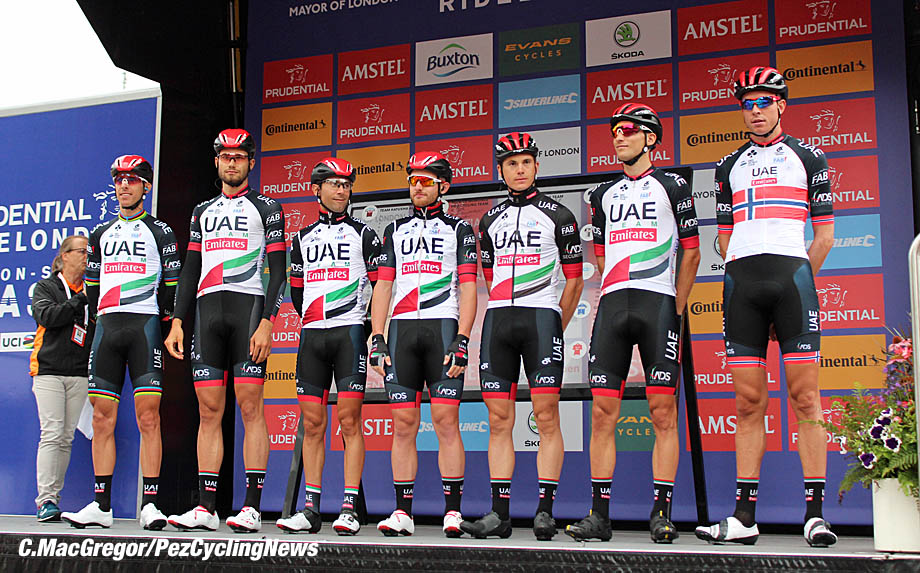 UAE Team Emirates, Peter Kennaugh looking fresh from winning the GP Cerami. Ben Swift was also there, but he ended the day stone last of those who completed the course 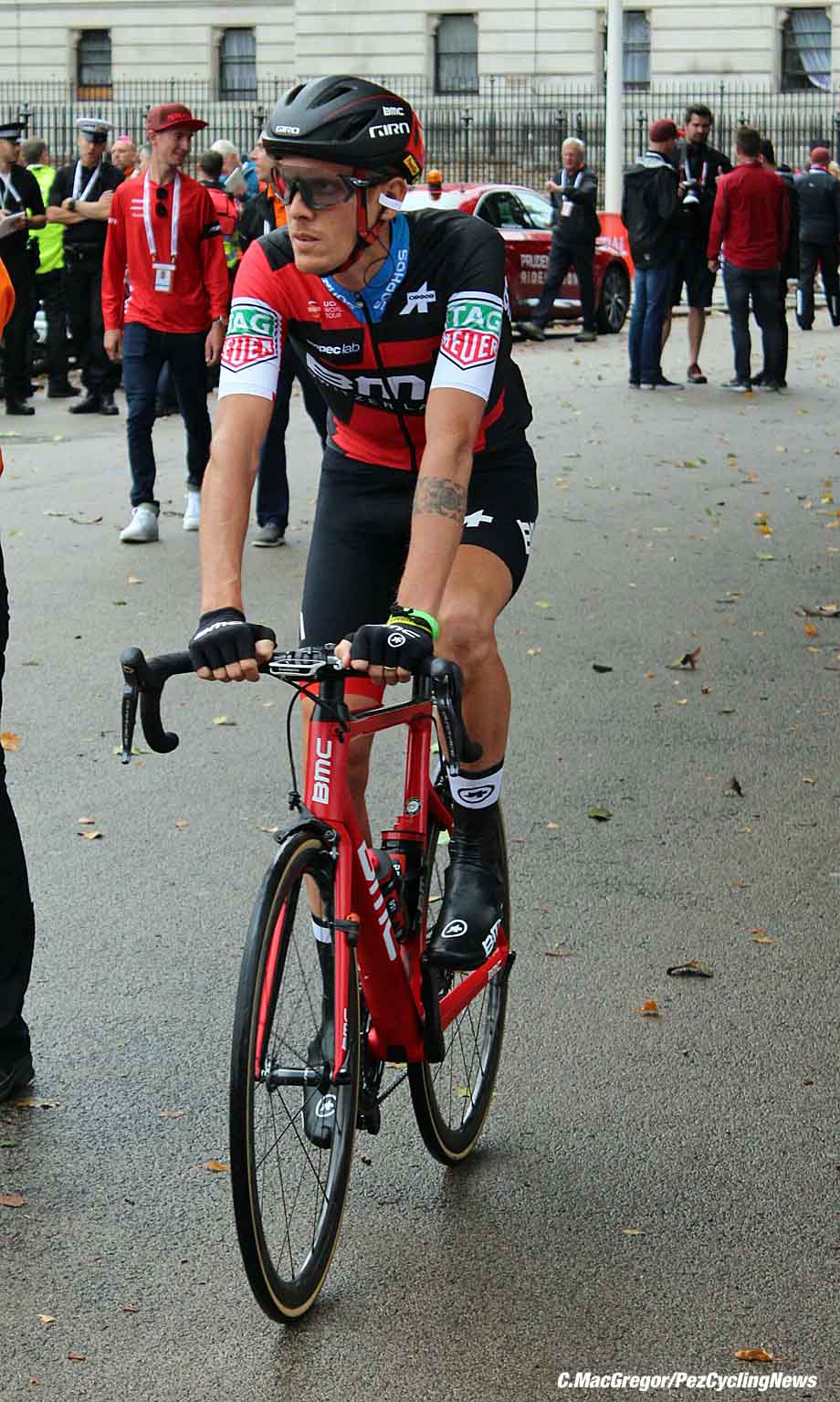 Alessandro De Marchi one cool dude on a bike 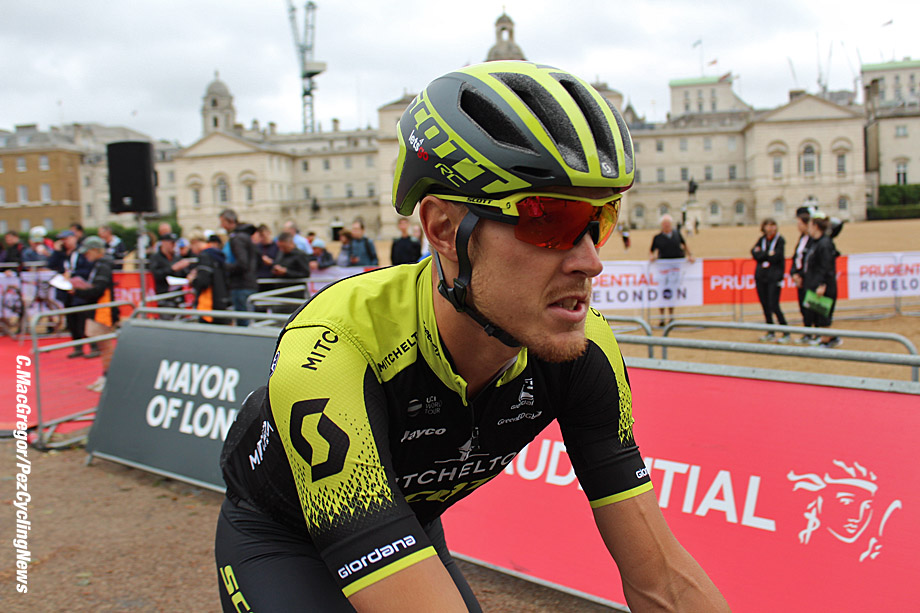 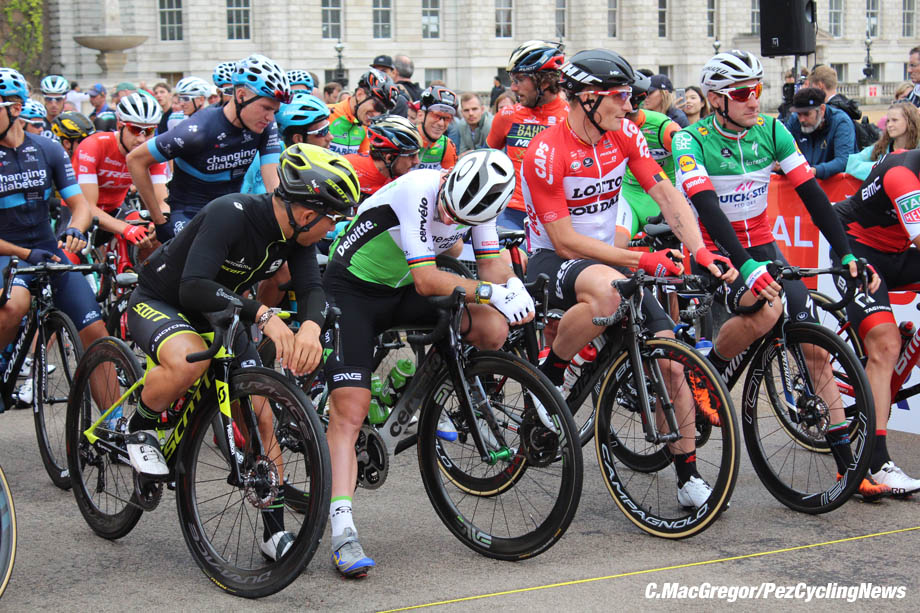 The star sprinters on the start line 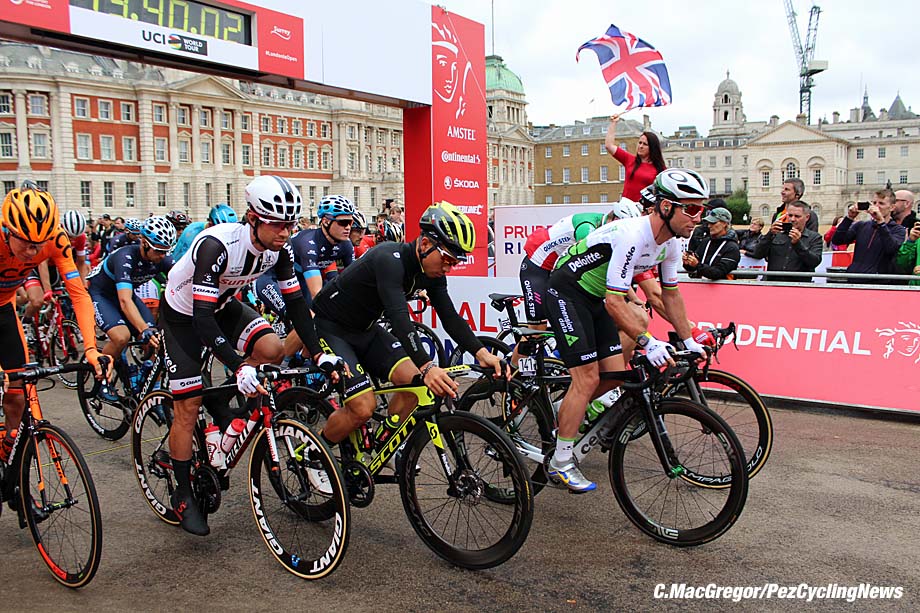 And they’re off! Cavendish leads the riders away from the start at Horseguards Parade

My view of the race action is limited, having decided to stay in the city and extends to the roll out and the finish. The large screens allow the fans to follow the race and keep their spot on the barriers.

In London the rain stays away, preferring to follow the riders into the lanes of Surrey and unlike the riders I stay dry. The race follows a familiar pattern with the break never being allowed too much of a lead and being reeled in in-time for the sprint trains to get themselves organised in time for the finish. That changes when the countdown to the riders approach begins. Steady drizzle dampens the crowds spirits despite the best efforts of the commentary team. 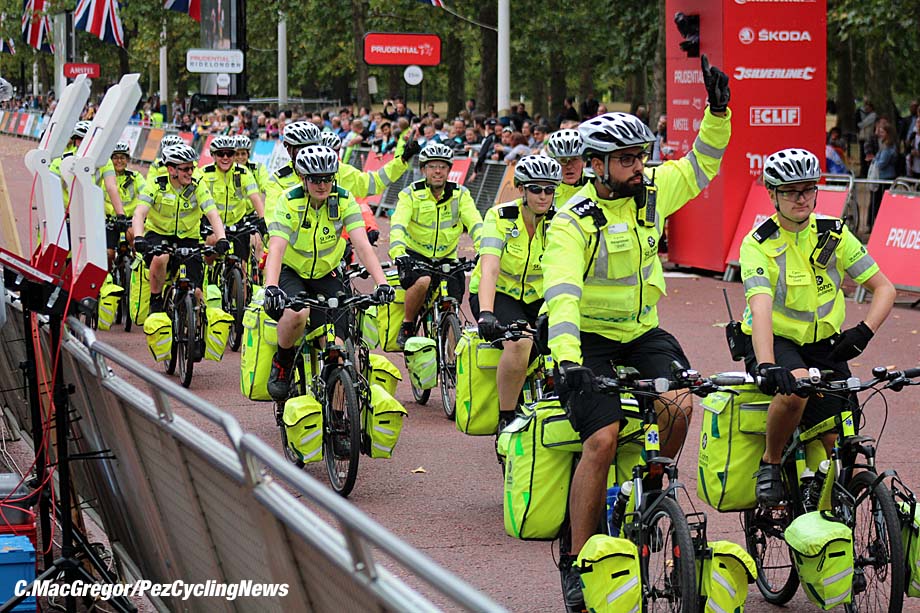 The riders have been less lucky with eventual winner Pascal Ackerman Bora-hansgrohe recovering from hitting the deck on a corner at the top of Ranmore Common, his team leading the chase of the break of five, at the time. It’s not serious but its enough to strike a note of caution for some. 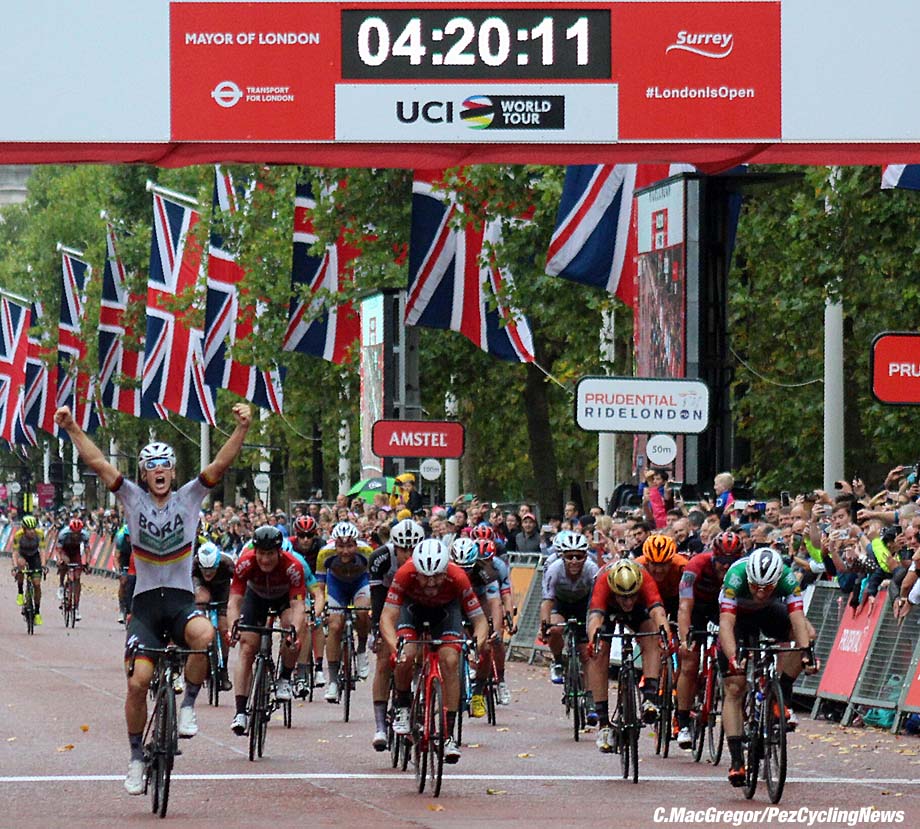 As the sprint unfolds its Ackermann from Viviani. Both riders have had stellar seasons to date, with Ackermann taking stage wins in both the Dauphine and Romandie whilst Viviani who despite a stellar season is clearly very disappointed at missing out on the win. Giacomo Nizzolo (Trek-Segafredo) takes third whilst Greipel, eight, and Cavendish, twelfth, aren’t a feature today. 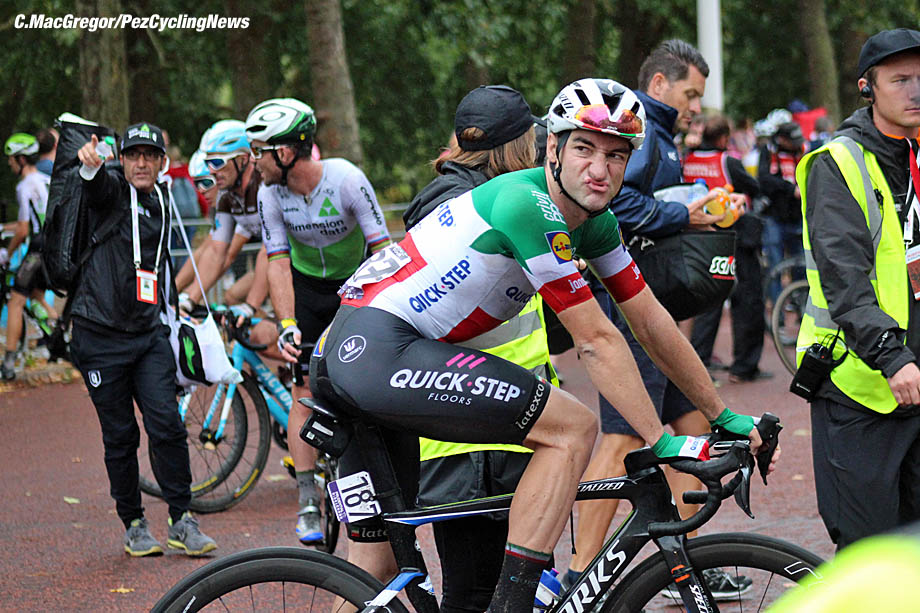 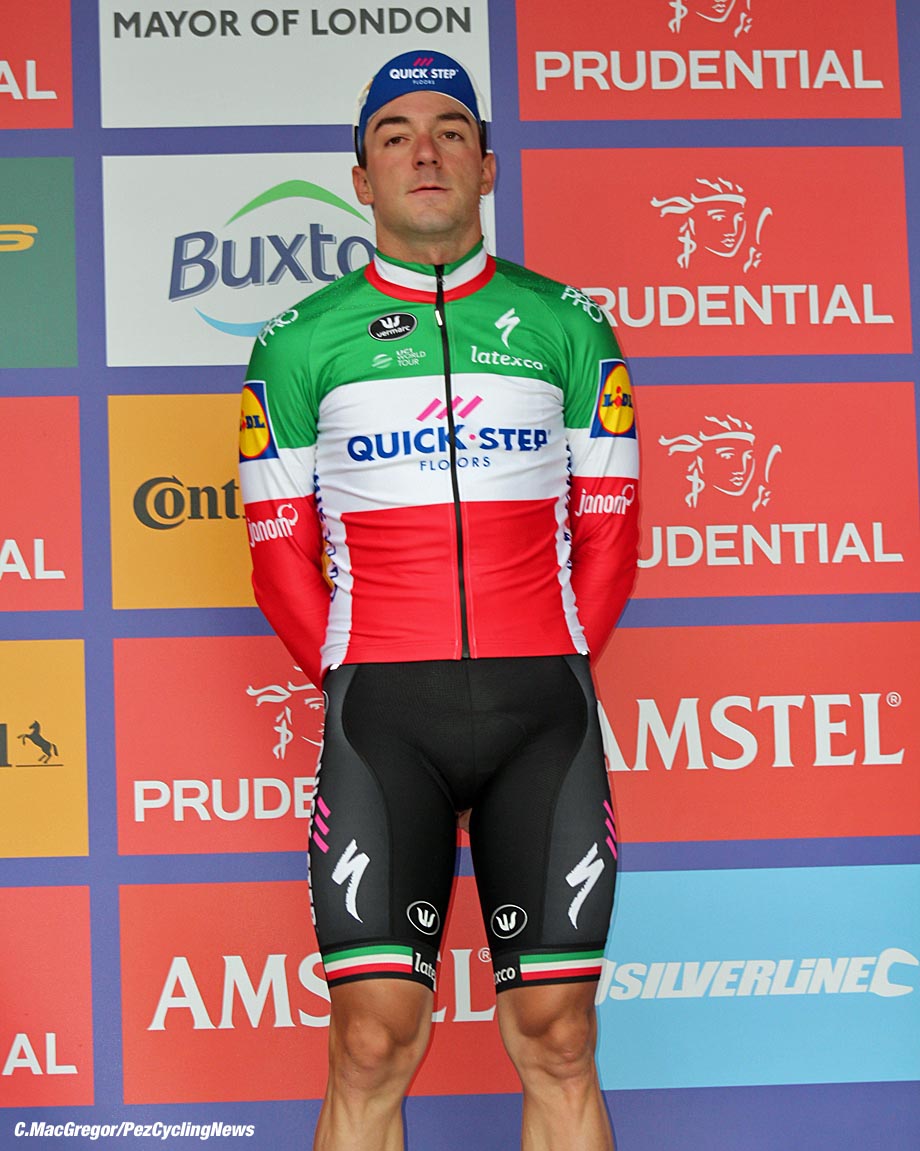 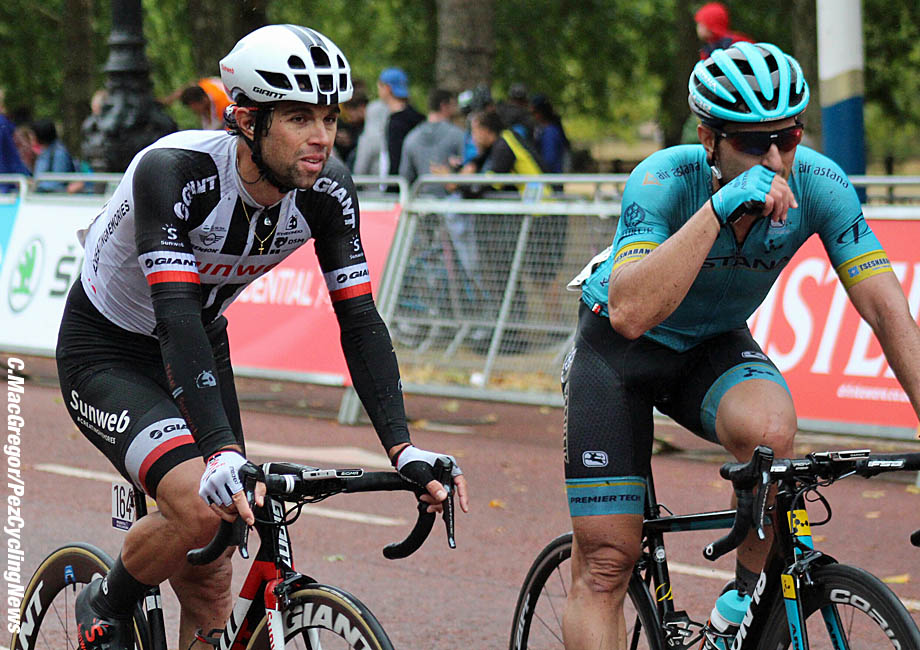 Caleb Ewan and British sprint hope for EF Education First-Drapac, Dan McLay are notable non finishers who would have hoped to have done something on the day. I hang around for the podium presentation and Riders take the chance to freshen up and change out of the grimy gear for the photos. 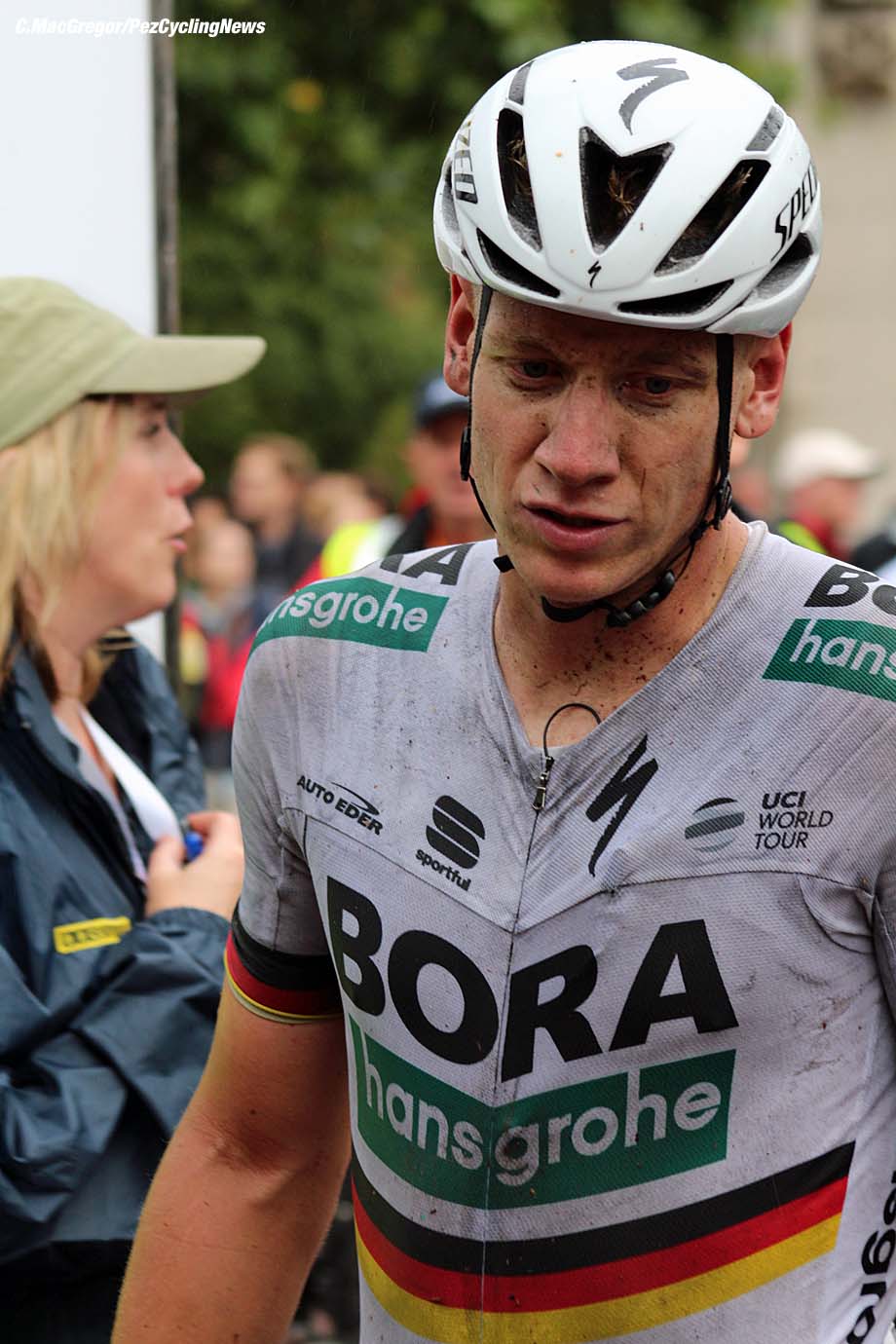 Ackermann before getting cleaned up, evidence of a hard day out 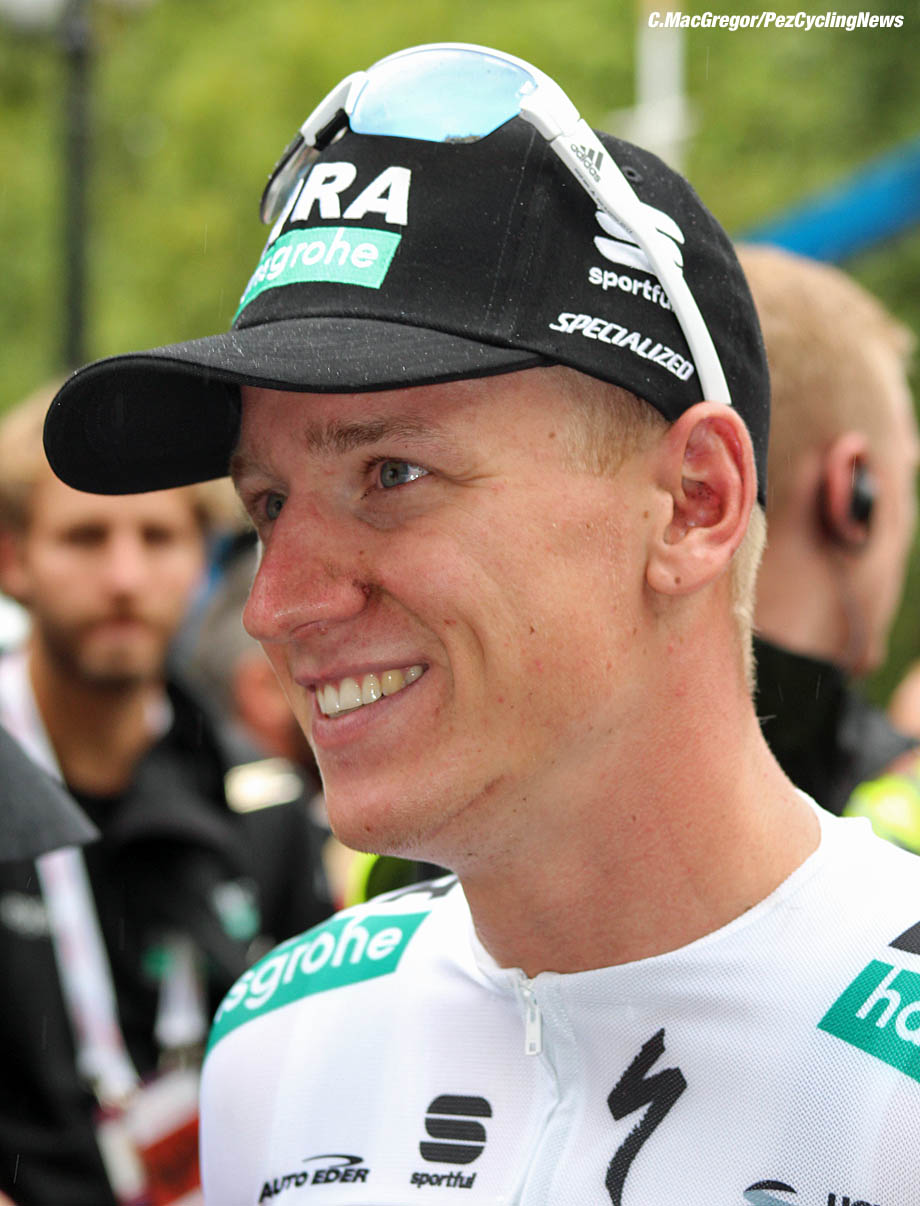 After, meeting the media 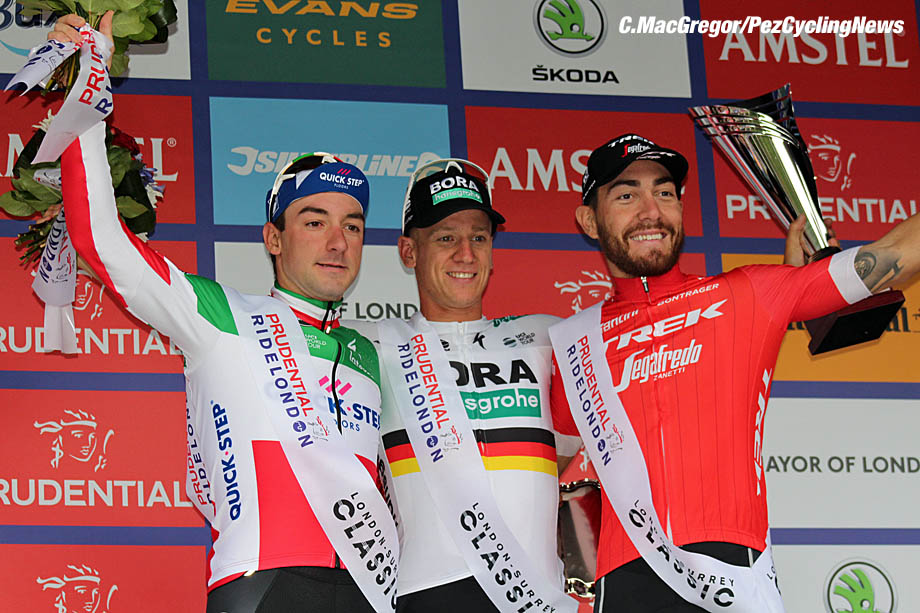 Ackermann, Viviani and Nizzolo. The podium, Elia tries to muster a smile

Aside from the race winner there were also a points competition which was taken by Manuele Boaro, Bahrain-Merida. 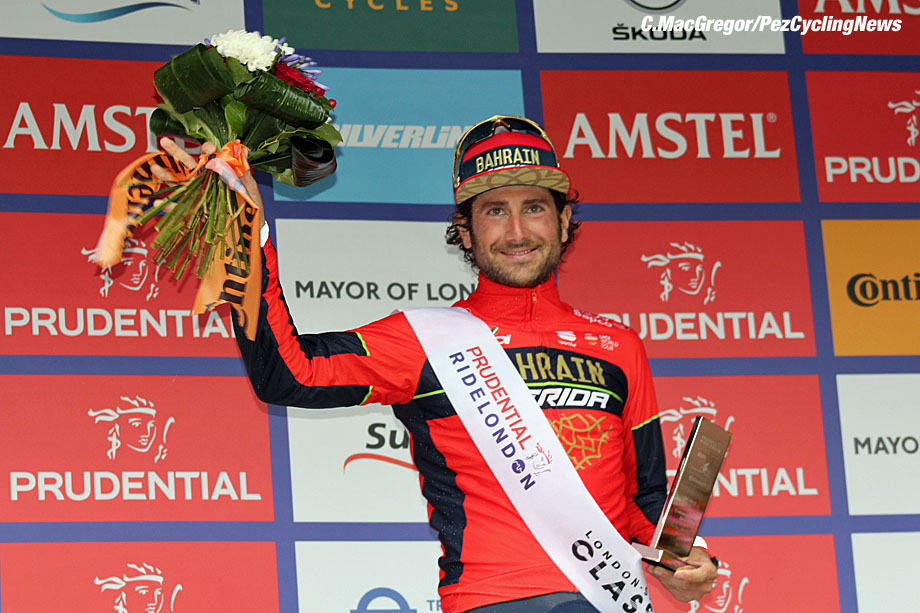 The mountains competition was taken by AG2R-La Mondiale’s Alexis Gougeard, both having been in the breakaway of the day and making the most of the opportunity to take something from the race. 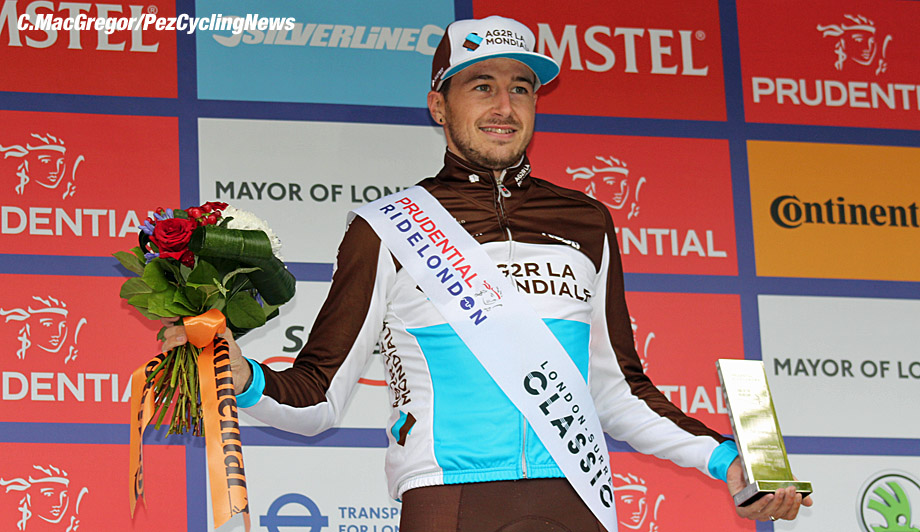 As I head off for the Tube I can’t quite get my head around the scale and overall cost of the weekend. Billed as the worlds greatest festival of cycling I’m not really an expert but it must be up there. Mass participation, incredible organisation and infrastructure, an iconic setting for the start and finish, it has it all.

After weeks of sunshine it may not have had the weather some would have hoped for and the tonnes of ice the organisers had anticipated would be required melted away unwanted but the impression the weekend will have left on participants and spectators alike will live on in the memory much longer.

Well done The Pru and the City of London. 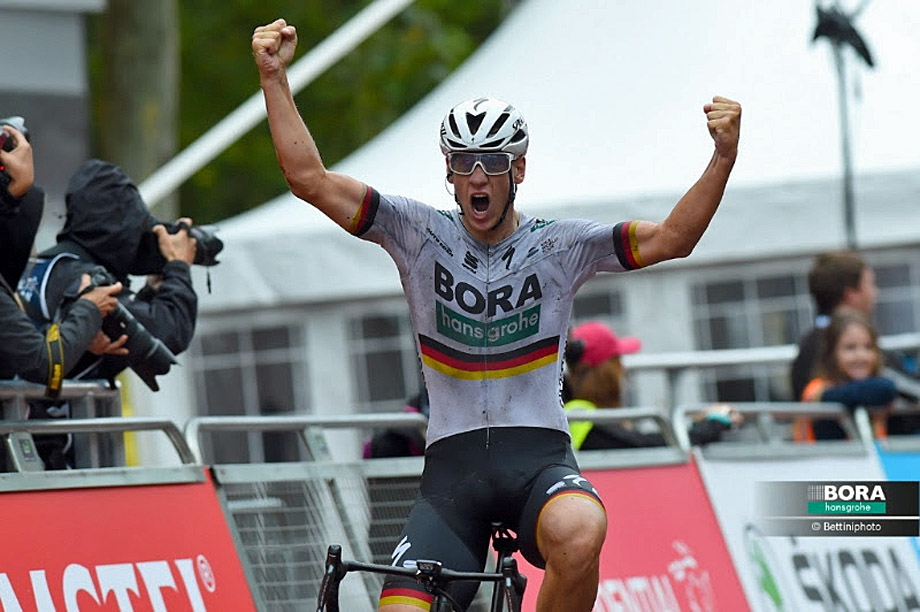