Rob Britton again proved that he is one of the top riders in North America by climbing to fifth place overall at the Larry H. Miller Tour of Utah. Along the way, Britton claimed the Most Aggressive Rider title for the final stage. The seven-day stage race covered 949-kilometers and featured over 53,000 ft of climbing. Starting in the majestic Zion National Park on Monday, and concluding in the resort town of Park City, the Tour of Utah is known as America’s toughest stage race. 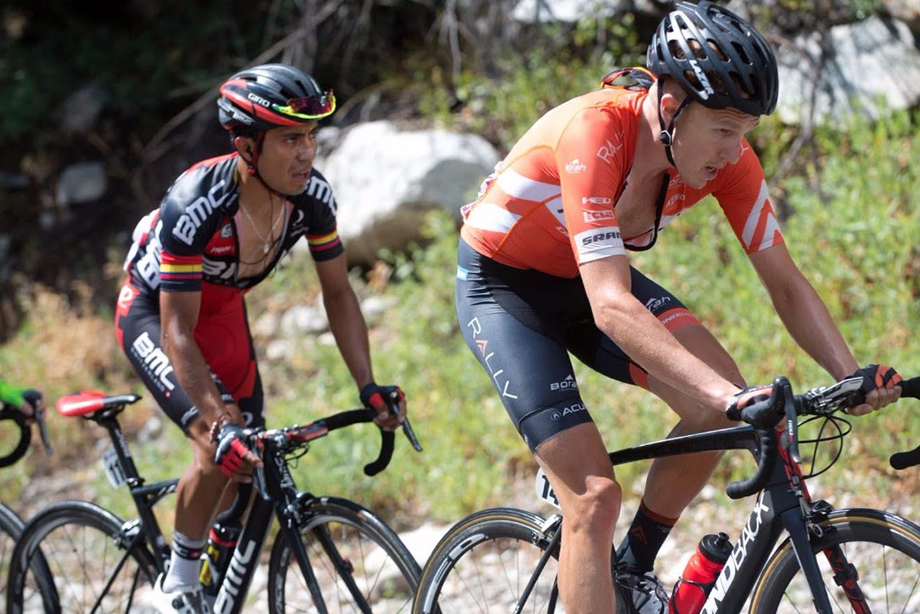 “The peloton lost control over the top of Wolf Creek Ranch Road and the team went to the front to bring it back,” said Britton after the finish in Park City. “From there it was just a matter of who had the legs – Lachlan (Morton) was the strongest. All week I have felt good. I have put in a lot of work to be able to climb with these guys. It is a bit of uncharted territory for me so it is good to see those efforts paying off. The squad was amazing all week. From day one we rode as a team, we knew our objectives, and no one drifted off and did their own thing. You don’t finish top five overall in America’s toughest stage race without an incredible team around you. It’s pretty flattering to have this many guys riding for me.” 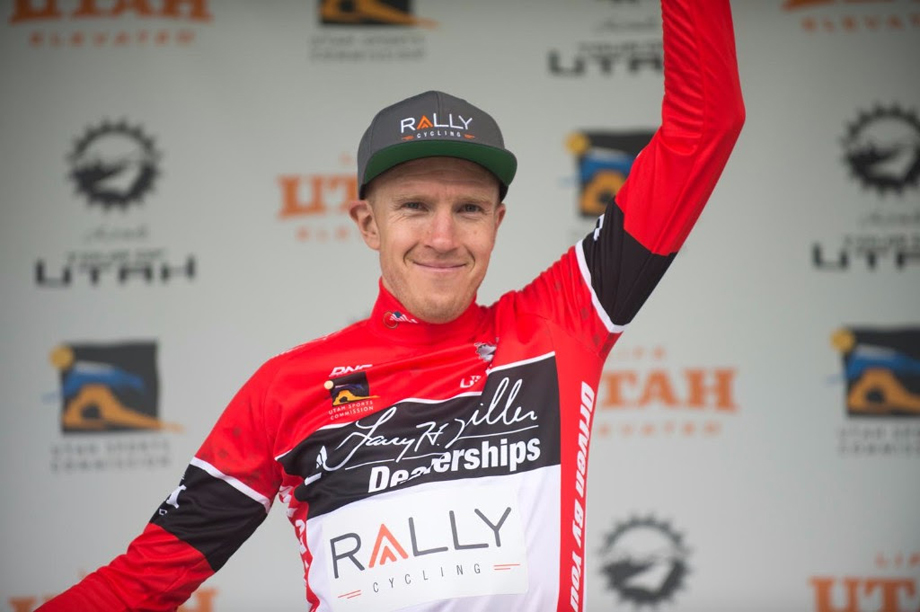 The first two stages were intended for the sprinters, but mountainous terrain put many of the top sprinters in trouble before the stage finales. Despite the team’s best efforts, the podium was elusive. It wasn’t until stage three on the ascent of Mount Nebo that the team’s hard work started to pay off and Britton was able to lay the foundation for his high overall finish. On the lower slopes of the climb, Lachlan Morton (Jelly Belly) powered off the front, with only Andrew Talansky (Cannondale-Drapac) able to follow. As the duo pulled away, Adrien Costa (Axeon-Hagens Berman) bridged across. Behind the leading trio, Britton combined forces with Darwin Atapuma (BMC) to give chase. On the descent into Payson, Britton and Atapuma were joined by Atapuma’s BMC teammates Tyler Eisenhart and Joey Rosskopf. Britton would cross the line in fifth and move into sixth overall heading into the second half of the race.

After riding in the breakaway during the sweltering heat of stage three, Tom Zirbel suffered on the climb of Mount Nebo and missed the time cut. It was a tough loss for the team and his strength and power were missed during stage four, a flat run from IM Flash to Kearns. In the finale Travis McCabe (Holowesko – Citadel) powered up the left side of the road to claim victory. Kiel Reijnen (Trek-Segafredo) was second with Sebastian Haedo (Jamis) in third. Eric Young crossed the line in fifth. Despite his impressive finish, two-time Tour of Utah stage winner Young was disappointed to have not taken the victory.

The team again rallied around Britton in stage five from Antelope Island National Park to Bountiful. Evan Huffman infiltrated the day’s breakaway before working for Britton on the tough finishing circuits with a steep climb to the top of Bountiful Bench. Towards the end of the stage, a small group formed at the front of the race and it would come down to a bunch finish. Britton made the group, stayed out of trouble and crossed the line in ninth, maintaining sixth overall heading into the queen stage from SnowBasin to Snowbird. 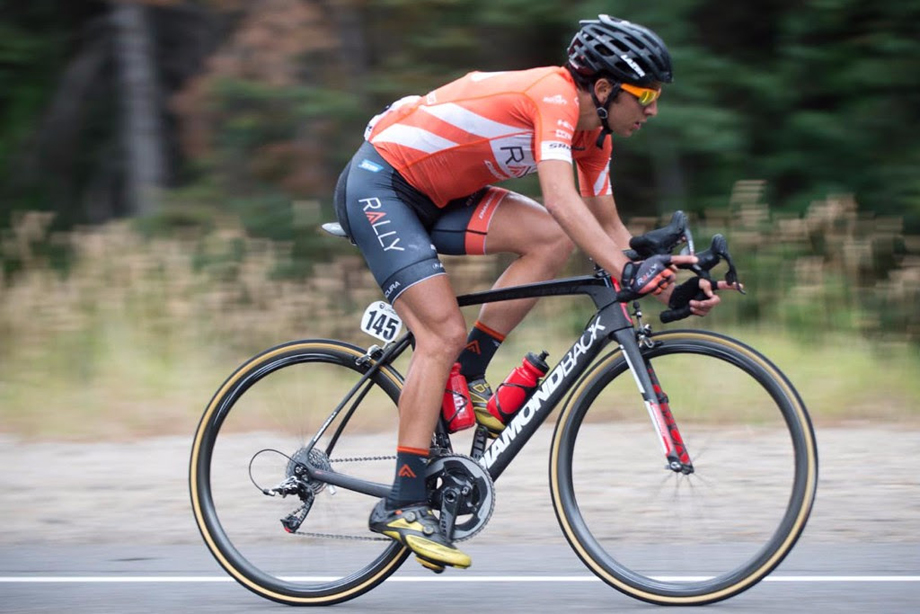 The team rode well to protect Britton throughout stage six but at the base of the ascent to Snowbird, Britton was isolated. Without teammates, he remained near the front, never dropping down further than fourth wheel. In the closing kilometers Atapuma attacked and quickly opened a gap. Talansky was the first to respond, and once he made contact with Atapuma, he went to the front and powered to the stage win and the overall lead. Britton held steady and limited his time losses, crossing the line fifth and moving up to fifth on the general classification.

The seventh and final stage was the last opportunity for Britton to move up the overall standings. Starting in Park City, the peloton faced the tough climb up Wolf Creek Ranch Road and the Hors Category Empire Pass. Early in the stage, the peloton tried to put pressure on Talansky and on the climb of Wolf Creek Ranch Road the race started to break apart. With Rosskopf in the breakaway, and just 20 seconds behind Britton on the general classification, Rally Cycling gave chase and neutralized the threat. As the peloton hit the base of Empire Pass, Morton went on the attack and quickly opened a 20 second gap. Morton’s lead continued to increase while Britton again held steady. At the line in Park City, Morton claimed the stage and overall victory. Britton crossed the line in sixth, claiming the Most Aggressive Rider jersey and locking down fifth overall.

“In general we were just trying to look after Rob,” said Team Director Patrick McCarty after the final stage in Park City. “He has been riding great all week, so we just wanted to keep everything equal into the last climb. The race was ridiculously fast from the gun so we just stuck to the plan. The guys really stepped up. There were a couple of situations out there where things really started to go sideways and the guys knocked it out of the park. Rob had a great ride to finish 5th overall in a race of this caliber. The entire team rode well this week. Danny (Pate), Emerson (Oronte), Evan (Huffman), Eric (Young) Adam (De Vos) and Pierrick (Naud) rode selflessly the entire race. It was a strong team effort.” 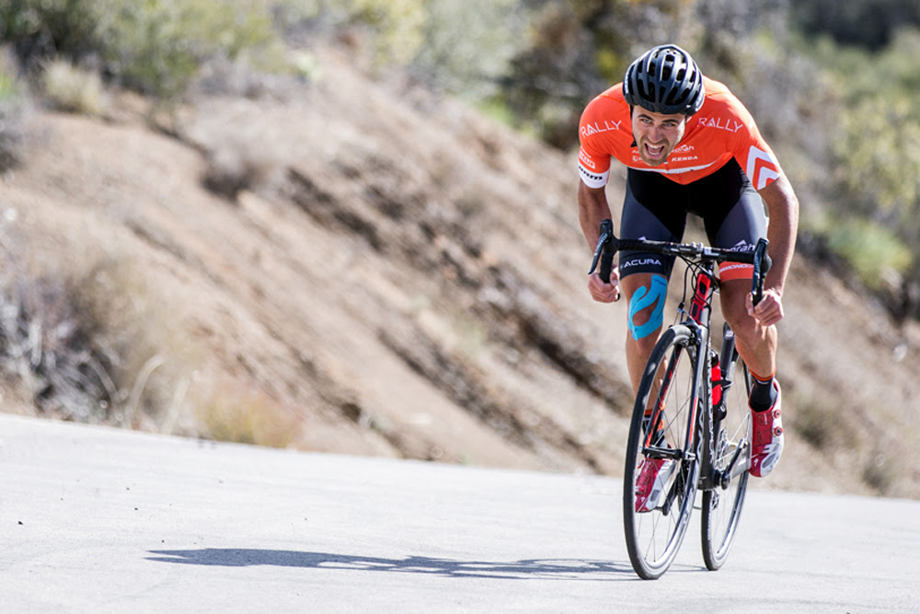 While Britton crossed the line in Park City, Jesse Anthony raised his arms in victory in stage nine of the Tour de la Guadeloupe. Anthony sprinted to victory ahead of Mark Flavien and Maxime Le Lavandier. It was Anthony’s second stage win of the event and the third for Rally Cycling. The win also gave him overall victory in the points competition. Anthony’s teammate Brad Huff won the opening prologue before crashing out on stage one. With Huff out of the race, Anthony took over the leader’s yellow jersey. The team was unable to defend on the second stage, but Anthony bounced back with victory in stage three. In addition to Huff and Anthony’s stage wins, the team had top finishes from Shane Kline, Tom Soladay and Bjorn Selander.

The Serene Farewell for Jérôme Coppel