Race Report: Alejandro Valverde may have faded badly in the final week of Le Tour but today he showed the rest of the peloton how to race this post-Tour Classic. He may not be from the Basque Country but Balaverde (the Green Bullet) loves this race and was determined to win it for a second time.

We’re quickly back into Classics mode with the Clasica San Sebastian which seems to sneak up on us every year, coming just six days after the end of the Tour de France. This means that we get two different types of riders lining up at the start: those who have just come out of the Tour and those who didn’t get the call. 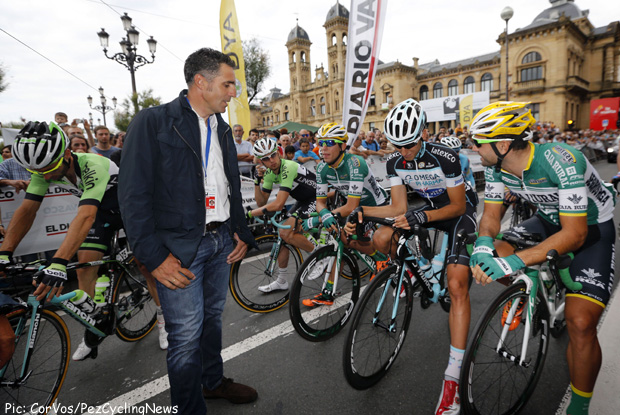 Tour riders are either flying high, with three hard weeks of racing in their legs or they’re still pretty much exhausted and hoping just to do their job for the team and survive to the end. Those that didn’t start in Yorkshire will either be struggling to find racing form or will set out from San Sebastian feeling much fresher than the others and keen to impress. And that’s the other consideration; The transfer window is open and some riders are still searching for a team, or hoping to retain their place for next year.

It’s also a race that has traditionally been important to the Spanish riders and both Valverde (Movistar) and Rodríguez (Team Katusha) will be looking for success. That said, with eyes now firmly looking towards Jerez in just a matter of a couple of weeks, they might be content to let their teammates go for glory.

Flurry of Attacks
With nice weather in San Sebastian it was game-on right from the start with lots of riders trying to form the break of the day but eventually it came down to one man. Amets Txurruka (Caja Rural-Seguros RGA) got up the road and proceeded to ride solo for a major part of the race. We haven’t seen much of the Basque rider as the team from Navarra hasn’t been on the World Tour stage but he’s a class act and rode strongly over the Iturburu over six minutes ahead of the bunch.

Behind, we had two major abandons. 76 km in and Philippe Gilbert (BMC) climbed off; 5km further on and Peter Sagan (Cannondale) had also gone.

All Change
As Txurruka headed up the Jaizkabel for the first time his gap had been reduced to just over a minute and was coming down quite rapidly. The major chasing was being done by Movistar and they seemed to have a plan in mind for this race. 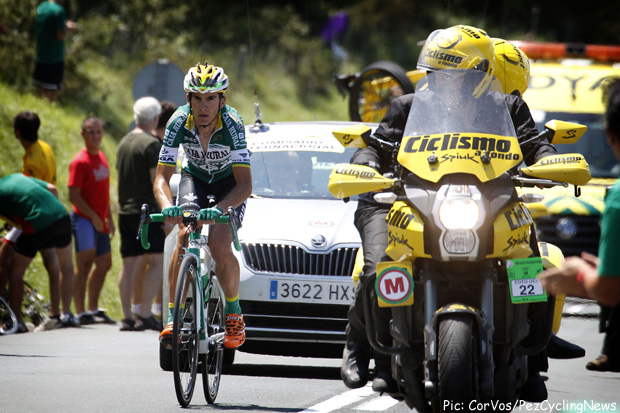 Eventually the Basque rider was reeled in and next to go was David Lopez Garcia (Team Sky). Three more riders got across to him and they were Alessandro De Marchi (Cannondale), Giovanni Visconti (Movistar) and Matthew Montaguti (Ag2r).

With Visconti, Ten Dam and Bakelants being present in the break, the peloton decided that the group was too dangerous and began to work to bring them back. Up the Arkale for the second pass and the break was just ahead of the field with most of the major teams playing their part and maneuvering for position. It all came back together with just over 30km remaining but next to go was Andriy Grivko (Astana). He had a slim lead of between 15 and 20 seconds and it didn’t look as if he would be able to hang on.

With Movistar playing a waiting game, Grivko was slowly pushing his advantage and at the 20km to go point he was holding a lead of 34 seconds but the peloton was beginning to lineout behind.

Tour Men to the Fore
As the peloton hunted down the Astana rider it was beginning to look as if it was the Tour riders who would be strongest today. The bunch had been reduced considerably and it was the predictable teams and riders who were doing the chasing.

As Grivko came across the finish line for the penultimate time and he headed out on the last 16km circuit his lead had been reduced to just 7 seconds. With 6km to the final climb everyone was jockeying for position for the last ascent, a tough power climb at the start finishing with a short steep section.

With just 13km to the finish it was all back together and we began to wonder if it would be a mass sprint or if we would see fireworks on the final climb. Greg Van Avernaet (BMC) was moving up but the race was wide open at this time. Mick Rogers (Tinkoff-Saxo) was also there and had to be a good bet for the win.

Orica-GreenEDGE was also there and with the talented Adam Yates as we wondered who would be first to react. The French Ag2r-La Mondiale team hit the front and turned the screw a little.

Steeper and Steeper
The climb of Bordako Tontorra was getting harder and harder and Romain Bardet (Ag2r-La Mondiale) came to the front but the attack came from Kolobnev (Team Katusha) and he powered away to get an impressive gap. Mikel Nieve (Team Sky) and Mollema (Belkin), Greg Van Avermaet and TJ Slagter (Garmin-Sharp) clipped off the front and tried to get across to the Katusha rider as behind the bunch was beginning to splinter.

Nieve made contact with Kolobnev and one became two but the Sky man decided to go over the top. Suddenly another Katusha rider came across and shot by Nieve and it was Purito himself. He’d managed to distance Valverde on the last steep section but the experience of the Movistar leader saw him rejoin.

With 6km still to ride it was Rodríguez and Valverde together ahead of the chasers with the Katusha man making most of the effort. Valverde was aware that they were being chased by Nieve and the young Englishman Adam Yates. Mollema was also there and they were all measuring their effort to bring the leaders back without trying to blow their chances for the finish. The challenge of the Australian Orica-GreenEDGE squad evaporated though as Yates hit the deck on the descent as he was trying to come to terms with Valverde who had taken off on his own on the descent.

Back on the seafront of the Bay of Biscay and Valverde was holding a lead of 7 seconds with 1.5km to go over the three man chase group of Nieve, Rodriguez adnd Mollema.

Final Km
One thousand meters to go and Valverde had just less than 10 seconds as Mollema, Rodríguez and Nieve chased behind but Valverde was still pumping out the wattage and despite constant looks over his shoulder the race was his. With 300 meters to run he knew he had it wrapped up and had time to showboat to the finish. Behind, it was Rodríguez who opened up the sprint for second but Mollema overpowered him quite easily while Nieve had to settle for fourth. 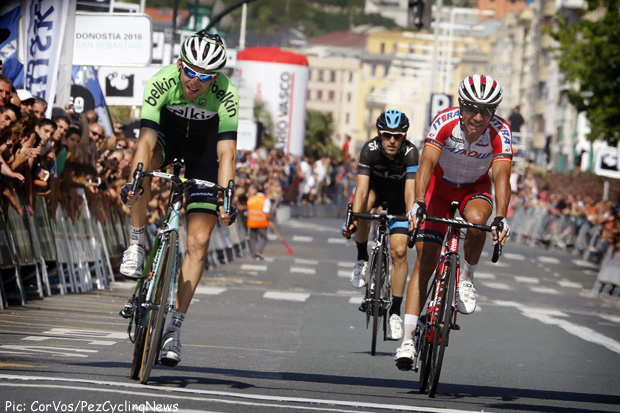 It was a masterful display of tactics from Valverde that will go some way to make up for a disappointing final week of the Tour. If Yates had managed to stay upright it’s debatable whether the chasers would have overhauled Valverde but in the end, you have to first finish in order to finish first.

The experience of the Tour riders ultimately showed in this first post-TdF Classic but Orica must be counting themselves extremely happy to have signed the Yates Brothers as they have shown their worth in spades this year. Valverde has also re-established his position as head of his own team and will now look towards the next challenge as World No.1 as this win moves him into the lead of the WorldTour ahead of Alberto Contador. 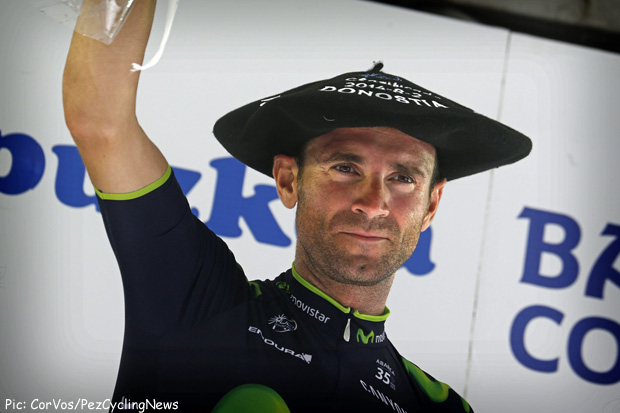 Chevrier, Eastman, and Kirsch to ride for Trek Factory Racing at Tour of Utah