Race Report: The 2023 season opens with the Schwalbe Classic, an evening criterium in down-town Adelaide – The curtain lifter for the Tour Down Under. Ally Wollaston won the women’s race from a break and Caleb Ewan won a bunch sprint finish from the men.

Caleb Ewan won the Schwalbe Classic for men, riding for the Australian National team. The Australian of Lotto Dstny was the fastest in the bunch sprint ahead of the Belgian Jordi Meeus of BORA-hansgrohe and Kaden Groves of Alpecin-Deceuninck. The criterium runs over a 1.35 kilometre flat circuit through the streets of Adelaide, a bunch sprint is always on the cards. 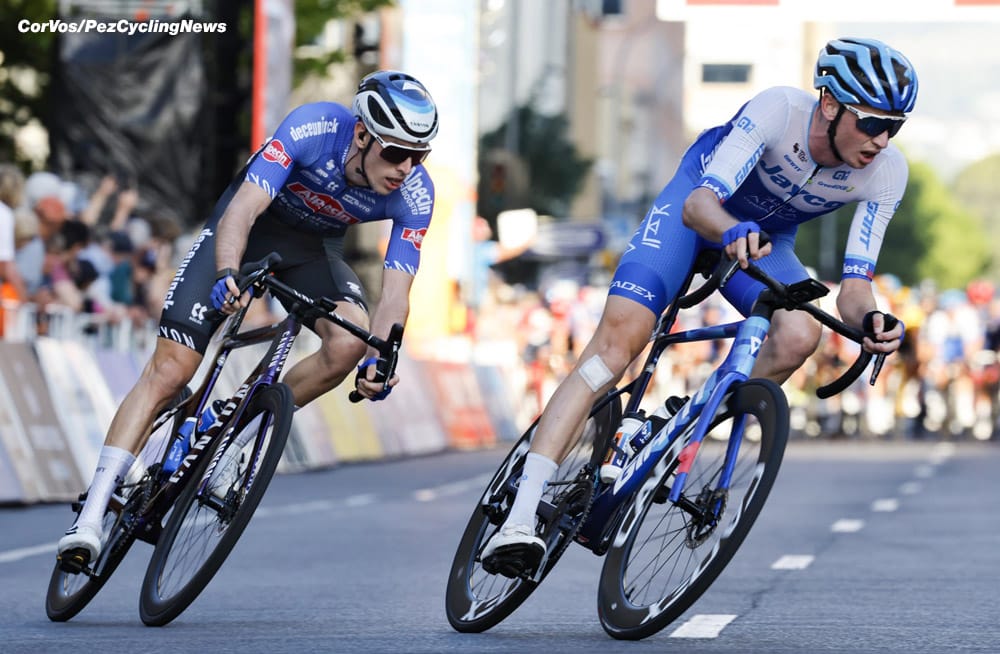 It was hard to get a gap on the peloton

About halfway through the race, a group of six men managed to break free and gain a lead of 30 seconds, but they had no chance against the peloton, which wanted a sprint. Home rider Caleb Ewan turned out to be the fastest of the pack, while Meeus finished second ahead of Groves. 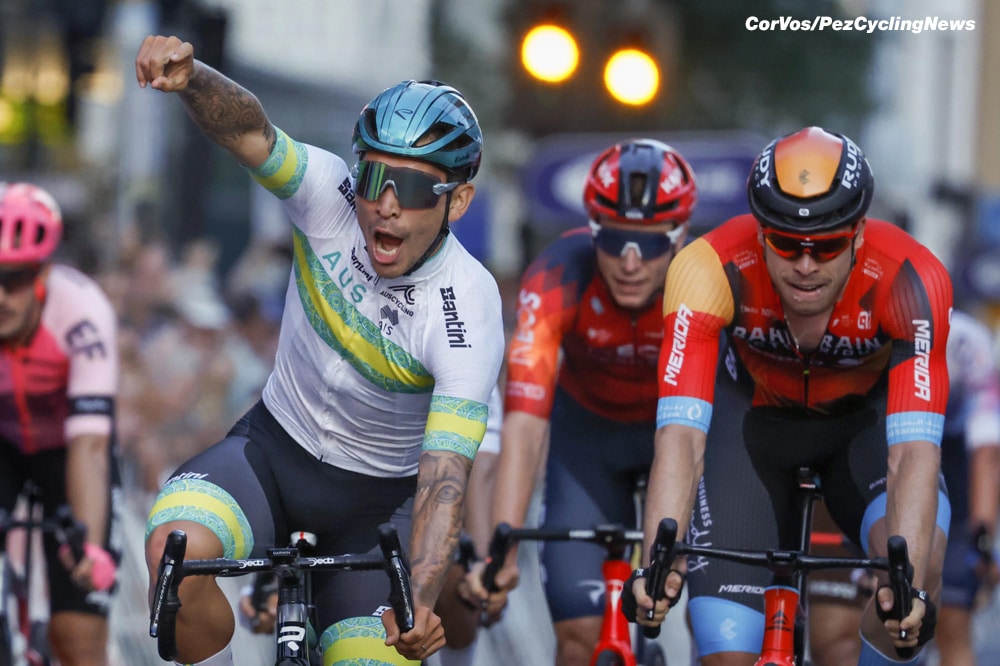 Race winner, Caleb Ewan (Australia): “You don’t count this race when you add up your wins at the end of the season, but maybe you should. It’s against a WorldTour field, in a pure sprint and we’re all going full throttle. But whatever the record books say, a win here in Adelaide this early in the season and ahead of the season is a confidence boost. As a sprinter it’s important to keep the momentum going. There are important sprints coming up in the Tour Down Under and I now know that my sprint is pretty good. That gives confidence for the next races. When you come out of winter, you always have a little doubt whether you have prepared correctly. I also changed coaches, so my training was slightly different. That’s why I didn’t know how it would go. I was already surprised with my performance at the Australian championship, but my sprint was still a question mark. So this win is important. It may not be noted as an official victory, but it means something to me. It’s confirmation.”

2nd, Jordi Meeus (BORA-hansgrohe): “It’s a bit of a shame to finish a close second in a bunch sprint, but it’s not a bad result to start the season like that. We knew Caleb would be one of the big favourites tonight, but he’s not here with his usual team, rather with the national squad. So we didn’t quite know which team would control the race. As expected, a small group went clear and we then had Marco at the front, which was perfect for us. The other guys executed our plan well and supported me as much as possible. In the end, my positioning could have perhaps been a bit better, but second place is not so bad in the end.” 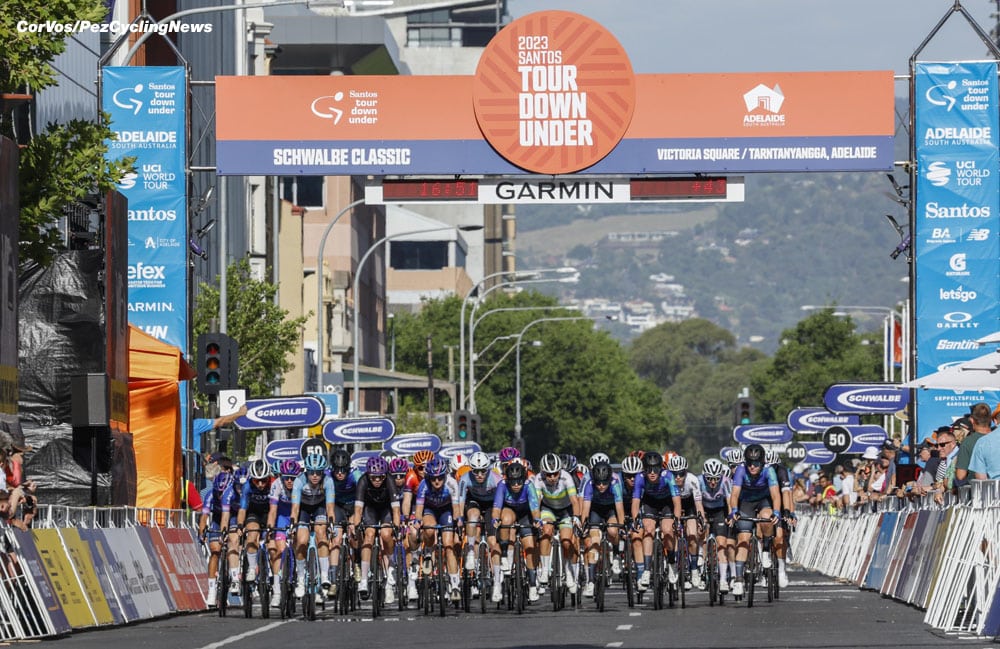 The women pass through the finish

Schwalbe Classic 2023 – Adelaide Women
Ally Wollaston won the Schwalbe Classic for the women, riding for the New Zealand National team. The 22-year-old rider was the fastest of a leading group of seven after more than an hour of racing. She beat compatriot Michaela Drummond of Zaaf and the Dutch rider, Nina Buijsman of Human Powered Health. 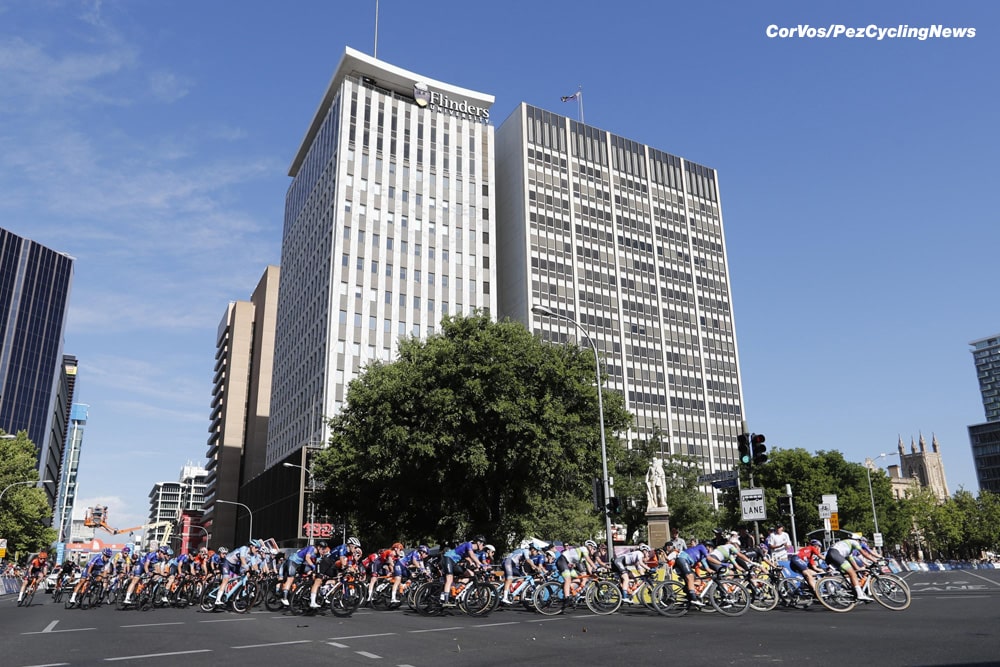 The peloton in Adelaide

The Schwalbe Classic is traditionally held the week before the Tour Down Under. The criterium runs over a 1.35 kilometre flat circuit through the streets of Adelaide. The race usually ends in a bunch sprint, but on Saturday a leading group was able to stay away. Wollaston, who is under contract with AG Insurance-Soudal-Quick-Step, was the fastest of the break and sprinted to victory. 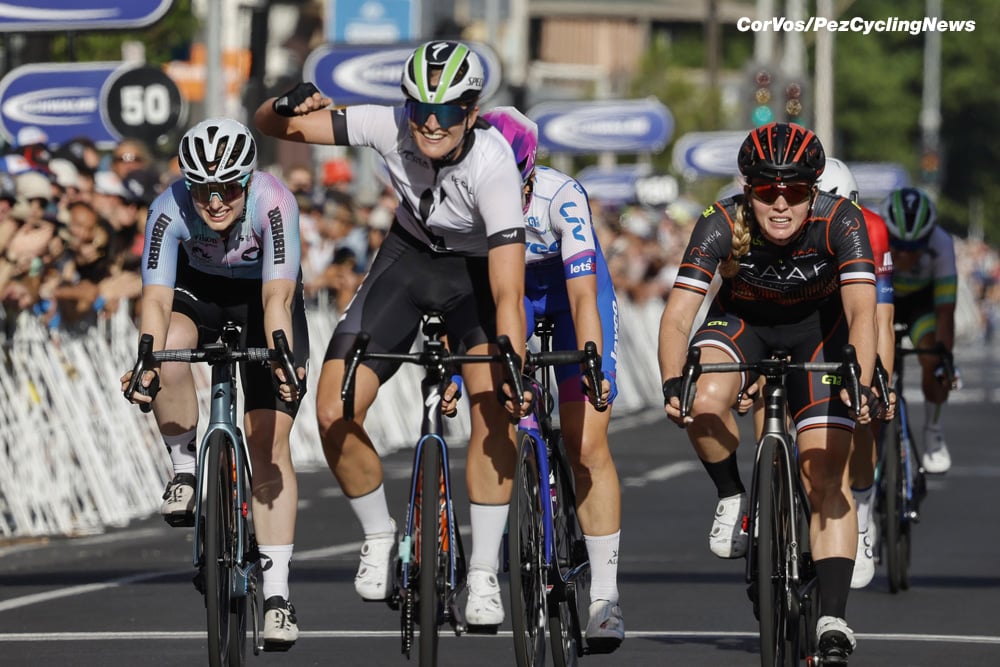