Race report: We’ve known for a while that it was in the genes for today’s winner of a beautiful edition of the Strade Bianche, a race we can comfortably call a Classic now. One of the most scenic events in the world, a nerve-shredding ending, and a worthy champion from Italian cycling aristocracy under the old city walls of Siena. Here’s how it happened …

We’ve got 188 Tuscan kilometers on the menu, and almost a third are on those already-iconic race roads of white dirt and gravel. It’s a truly gorgeous day, with the sun illuminating the Tuscan landscape.

Alex Saramotins (IAM Cycling), Maxim Belkov (Katusha), Ermeti (Androni) and the Swiss giant Michael Schar for the BMC Racing team are the day’s escapees. With Evans and Van Avermaet on the squad, it’s a sound move from BMC. Approaching half-way and the quartet have a whopping ten minutes on the bunch.

That gradually comes down as the unpaved sectors start to bite: after the climb of Montalcino, and out on sectors three and four near Torrenieri.

Those teams with contenders are holding a vigil near the front: RadioShack for Cancellara, Astana for Iglinsky, Cannondale for Sagan, BMC.

45 kms to go and Flecha (Vacansoleil) has decided that he’s just going to bridge up to the lead foursome … they’re 3’23” clear of the Spaniard.

The thinned down gruppo dances in and out of the shadows. Up ahead, the leaders, sweep down sun-bleached highways. Alex Saramontins (IAM) hunkers down as low as possible over his top tube.

Beautiful hill-top homes sit nestled among the poplars as the race ploughs past. The menacing shadow of the TV cameras moves over the landscape like something out of Predator, ready to pick off the unwary.

31kms to go and Flecha has taken back a minute on the breakaways. The scenery just stays ridiculously gorgeous; the sun fires longer shadows across the road as Cannondale string the field out. The lime-green shock troops have six men on the front. 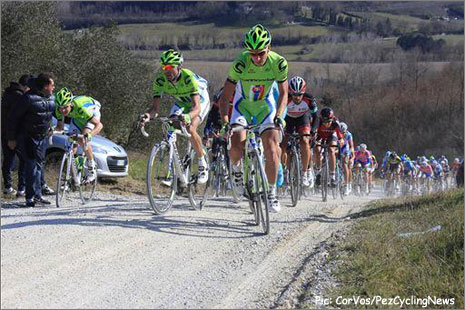 In the break, Ermeti is very happy to sit on Schar’s wheel – he’s dwarfed by BMC’s rouleur, so it’s like he’s riding behind an SUV.

We’re onto the next (sixth) sector of dirt. 26 kilometers to race. The farmers have been busy – the fields are ploughed to within an inch of their lives. The leafless skeletons of trees are just waiting to burst into leaf.

Garzelli and Failli (Vini-Fantini) have had an ill-timed appointment with the roadside. They’re ambling around gingerly, but the race is gone.

23 kilometers to go and Flecha sounds the two-minute warning. It’s been a hell of a chase, but it’s hard to figure out exactly what he himself has on the bunch. Ermeti gulps down a gel, swigs from his bidon. It’s not beyond the realms of possibility that the break could go the distance now.

Flecha stomps up a climb, gestures for a bottle, and swipes one offered by a Movistar team helper.

Inside twenty to go, the break hit gravel sector seven of eight. It’s just over two kilometers of grinding up narrow hill tracks, but they’ve got 1′ 40” on Flecha and about 2′ 30” on the bunch. Astana have staged a coup and they’re pulling it along now.

Ermeti is stretching the lead quartet as they pick their way along a single-track road. Flecha gets cheered on as he wrestles up towards them, slowly, slowly.

Flecha is caught, all of a sudden, by Moreno Moser and the Italian pulls away as a Cannondale team-mate allows a gap to develop to the bunch. The Moser/Flecha accord is now at fifty-three seconds, with just 16 kilometers to race.

Belkov is on the front of the escape but they’re now going noticeably slower than Moser/Flecha. So inside fourteen kilometers to race, Schar lifts the pace as they hit last sector of gravel. Moser tries to drop Flecha in exactly the same spot as they close to half-a-minute.

The leaders fall apart as Schar ups the pace, and Belkov joins him, Moser has ditched Flecha and is closing in fast.

Ten clicks to go and Schar/Belkov are not giving up. Behind, in the bunch, Peter Sagan (Cannondale) is watching Cancellara (RadioShack); Movistar’s Valverde and Amador are active, and so is Ag2r’s Rinaldo Nocentini. 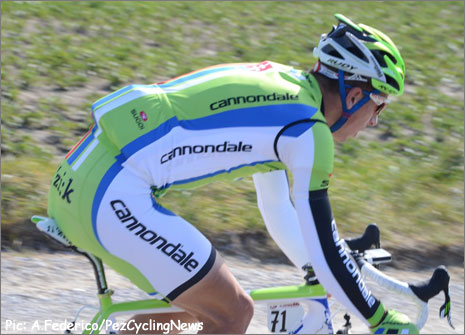 Moser catches Saramontins, but the Latvian champion has managed to stay with the Italian. Cancellara is sitting dead last in the chasing group. He was all alone this time last year.

BOOM! Cancellara launches, Sagan chases, bunch is lined out, but it’s not decisive enough. Now Androni’s Francesco Reda tries to get something happening.

Moser can see Schar and Belkov just ahead now. He’s got six kilometers to catch them. This is an agonising finish – good roads, but it’s up-down-twist-turn.

The chase is falling apart and almost at walking pace. Cancellara gestures frustratedly to the others to shift themselves, but nothing’s happening.

Five to go now, and it’s Moser, Schar, Belkov and Saramontins ahead by twenty-five seconds.

Moser’s desperately tracking Schar’s movements because that’s what he reads as a the threat. Saramontins and Belkov hanging on a bit.

Now a decent chase with Caruso and Amador, but it’s all coming back together as Cancellara tows Sagan up.

One kilometer to go: the front four have it in their hands now, but the bunch is closing. Moser ups the pace, Schar is dropped and we’re inside Siena’s city walls.

Moser’s tracked by Belkov and Saramontins. The Italian lifts it again and he’s got a gap. Now the road steepens. Moser’s hammering out of the saddle, through the narrow streets and he’s being caught by … Sagan! The tifosi roar on the Italian youngster and the super-talent gives them what they want. A home win! Brilliant ride from Moser, and a sound tactical display from Cannondale. 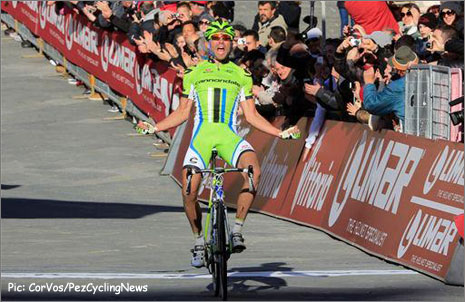 Frustration for Cancellara, but kudos to Saramontins for hanging on in the top five.