This Saturday the 9th Strade Bianche heads off from San Gimignano to cross the ‘White Roads’ before finishing in the historic city of Siena. Our man in Italy, Alessandro Federico (and his bike), covered the last 20 kilometers to take in the final climbs and those dirt roads in his Tuscan homeland.

Despite its short story the Strade Bianche is already one of the most important races in the spring calendar and it’s the first big race in Italy, opening an important month. March is full of cycling events with the WorldTour’s Tirreno Adriatico and the first of the historic classics: Milano Sanremo.

Being new in the calendar (next Saturday will be the 9th edition) its route is not well known as is the course of Paris-Roubaix or the Ronde. To learn something more about it, I spent an entire day in the lands around Siena with my bike, crossing ancient corners and riding narrow, dirt roads; the air was chilly, the sun was shining and my good form was still to come. Lots of heavy breathing, but a lot of emotion too. 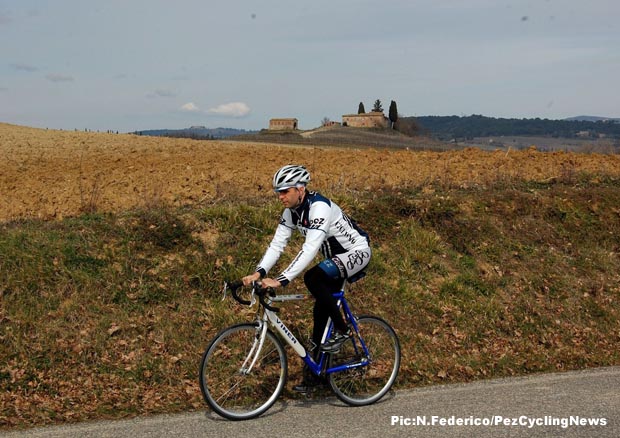 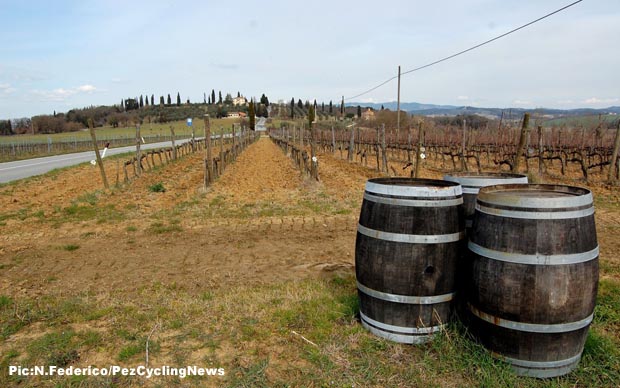 Vineyards and barrels (full?) on the way to Montaperti

Riding Lessons
Without doubt the taste of the day is the dirt roads. They really are white in color, as it suggests the name of the race (Strade Bianche in Italian means White Roads), they are compact and seem easy to ride. They differ from the Belgian cobbles as you don’t need any special equipment or any specific training: the good thing of the Tuscan roads is that anybody can ride them with a standard bike. 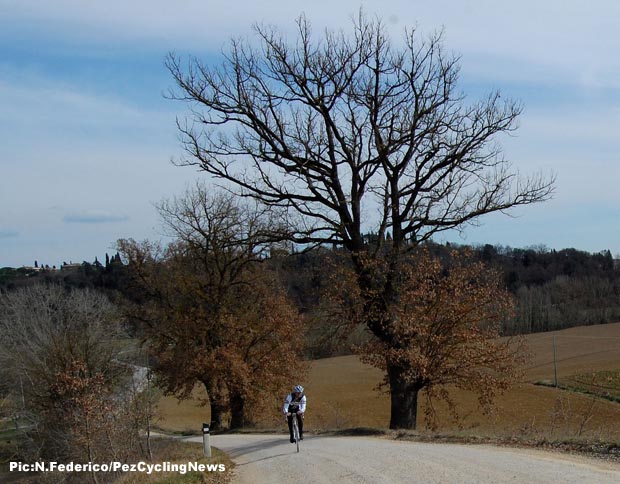 First sector and first climb to Vico d’Arbia, it is a hard one 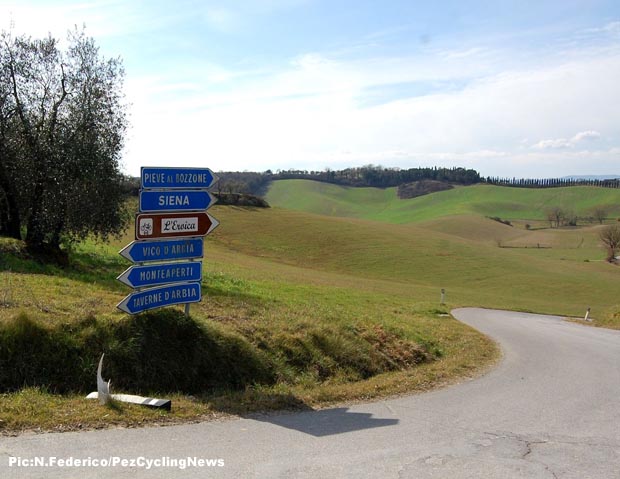 The way to follow is improving in the country with several intersections. But l’Eroica signs also help to find the right turn

They are so easy that they cheat you. These roads have an easy approach on the flat but actually the flat sectors are few; most of them are mixed with severe climbs and nasty descents. You definitely need to know how to handle your bike downhill, avoiding the center of the road, where all the gravel accumulates and, especially you need to learn, very quickly, how to pass from one side to the other through that gravel. 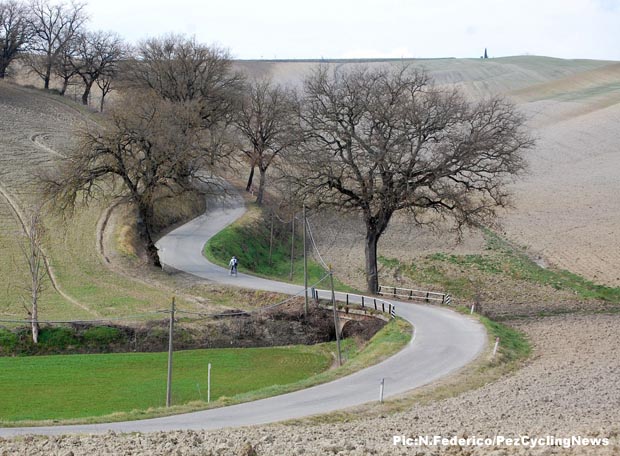 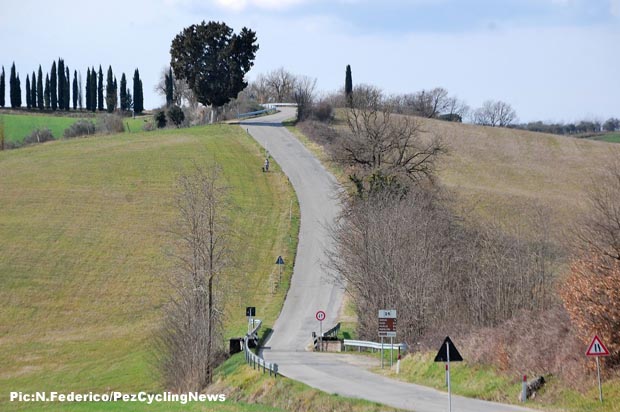 Yes, it’s as bad as it looks. Last year on this climb Sagan attacked and Kwiatkowski replied

A special suggestion for the beginners: do it only if you really need to do it… On the other side the climbs must be approached correctly, to avoid a big waste of energy. No dancing on the Tuscan gravel, it’s not the race for Contador. Being one of my first times on these roads I had to learn all the tricks on the way and luckily, I went home without any big falls. 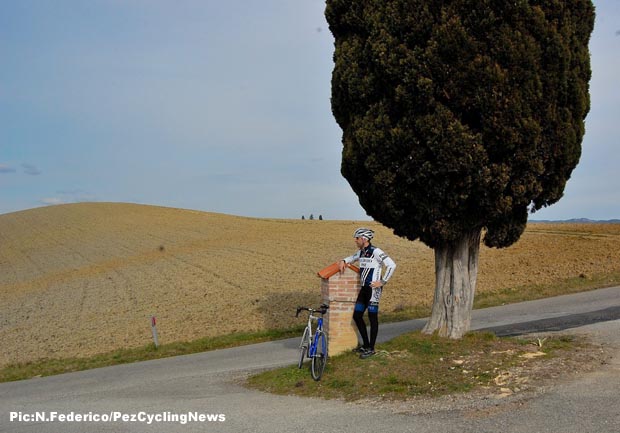 When you ride through such beauty, take your time to reflect a bit; it doesn’t always happen… 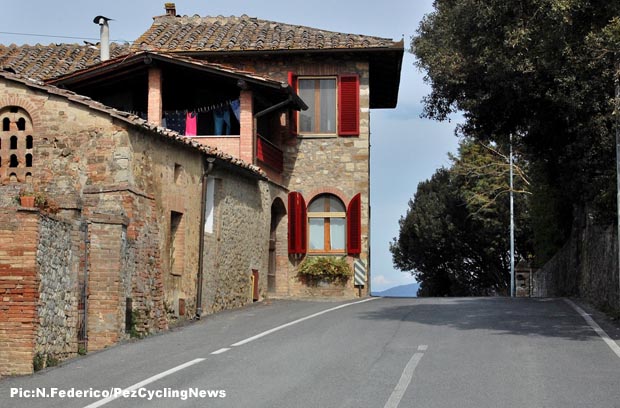 All Around Siena
The plan of the day was to ride last 25km of the race, the part of it where the big names come out and where the final attacks take place. Last year I explored the first part of this race, as well as the decisive sector of Monte Sante Marie (sector number 7) together with my good friend Diego Caccia, but we missed the last part because of the rain. 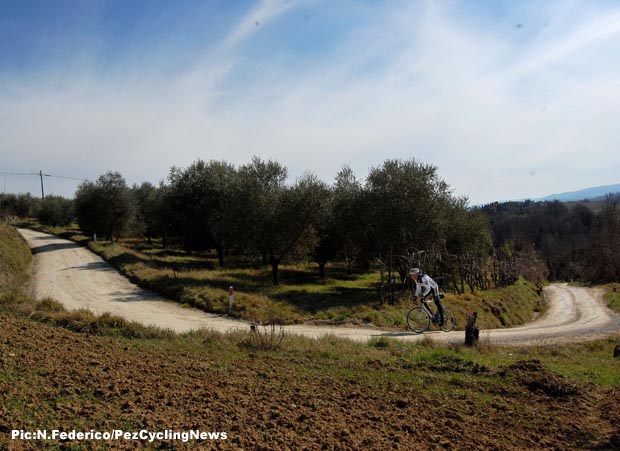 The way to Colle Pinzuto is very steep; no time to enjoy the olive tree view 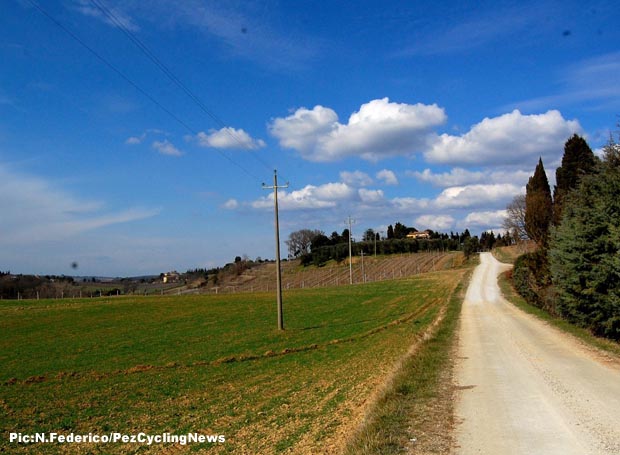 Beyond Colle Pinzuto the road is a bit smoother, but still climbs

All eight editions of this race where decided by an attack that took place in the final 25km, last year Sagan and Kwiatkowski attacked at 23 km to go: the most furthest out ever. These final, decisive kilometers circulate round the town of Siena with her towers in sight for most of the time. The final 2 km penetrate through the ancient walls from Fontebranda gate and climbing via Santa Caterina to one of the most beautiful and ancient squares you may find in Italy; Il Campo. 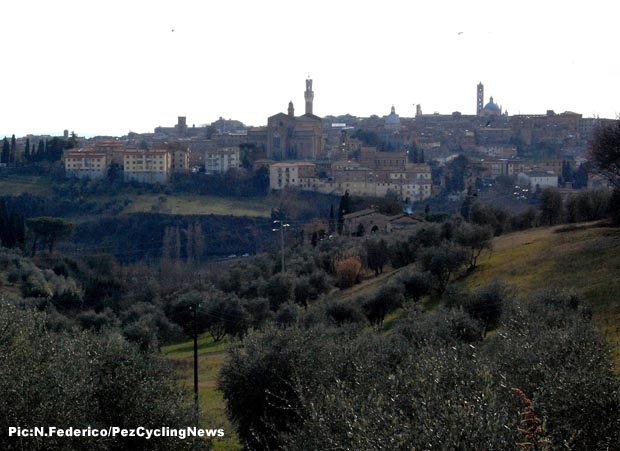 The route circles Siena from east to north. Its ancient towers sometimes show themselves from the top of the hills 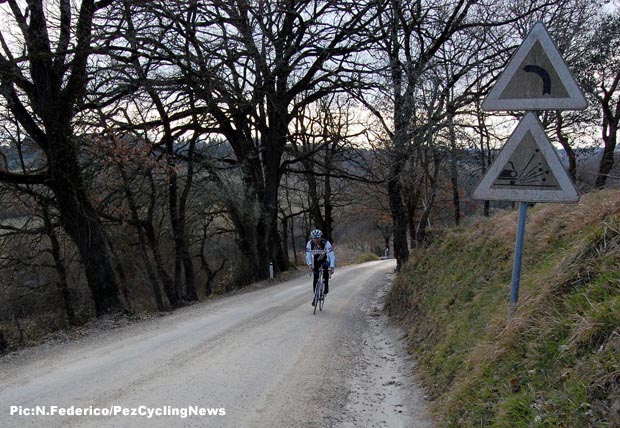 Le Tolfe climb is possibly the most brutal, especially the part in the woods

Let’s go
After a long trip from the Adriatic coast I’m ready for the big ride; the sun is high and it’s surprisingly warm. A few minutes to twelve, let’s go! (I don’t want be late for the lunch.) From the town of Montaperti to sector number 8 (three to go) it’s a maximum of one kilometer. All descent, the riders will approach this road very fast. This is a new sector that was introduced for the first time last year. It’s short and it’s brutal. The slopes are close to 15% and you face it at high speed because of the previous descent, it’s definitely a good point for an attack. At the top you can find again the tarmac, but there’s no way to take a breath, because the road always requires full care. Sharp turns, descent, climbs – from Pieve al Bozzone to the sector number 9 (two to go) there’s not one meter of flat. 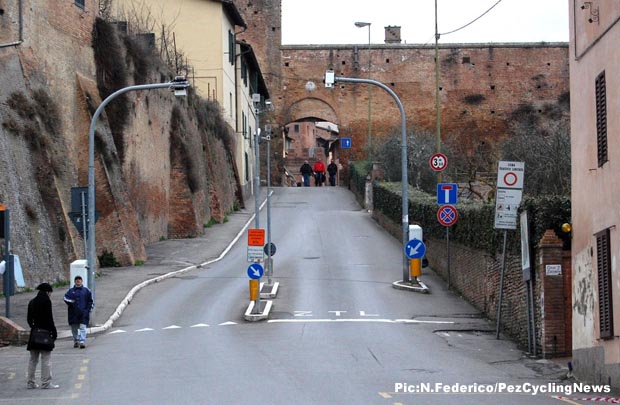 Through The Olive Trees
Before entering the town of Siena the race will turn on the right: Colle Pinzuto. This is the name of sector 9. The first part is a climb, a very difficult climb but less than 1km. The road is in good condition and a switchback through the olive trees marks the most difficult part of it. The second part of this sector is less difficult but the way is always up and down (more up than down), crossing vineyards and other olive trees. This climb was decisive in 2008 when Cancellara broke away together with Ballan, but in that edition this was the very last sector of gravel while now the big shot is reserved for the third and most terrible dirt climb of the day. 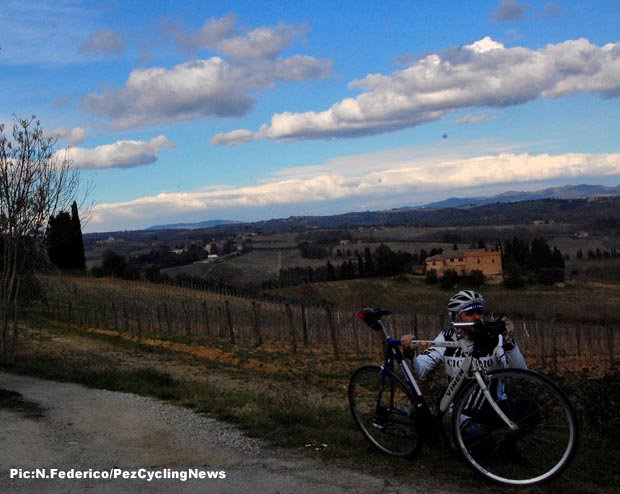 Le Tolfe Thoughts
Inserted in the route in 2009 Le Tolfe is 1.1km, half of it in descent and half climb. Both well over 12% and I cannot choose which is worse. The climb starts on a large road and it’s difficult to appreciate the real gradient but then turns in the trees and you really feel how hard it is. 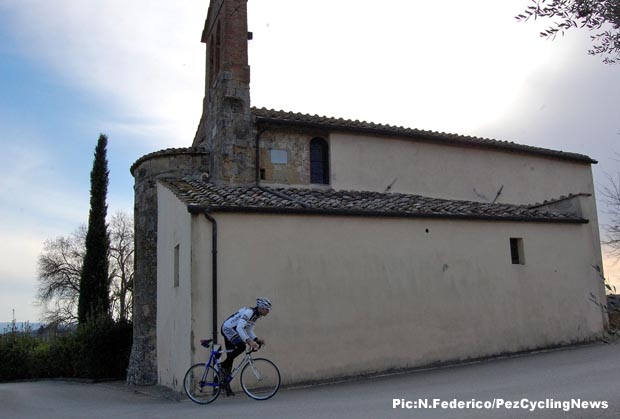 After 500 meters of suffering you find a small chapel at the top, San Paterniano. Not the Muur but something very similar

On top of this climb there’s a little chapel dedicated to San Paterniano which is closed most of the year. Unfortunately it was also closed when I passed by. But nothing can take away the peaceful feeling you have by stopping there for some minutes. I love to enjoy each single minute of my rides but I also like to spend some time alone, sitting and roving with my mind to all my dreams and hopes. Just one week to the next edition of this race that I like so much, I wait and long for this race all winter. 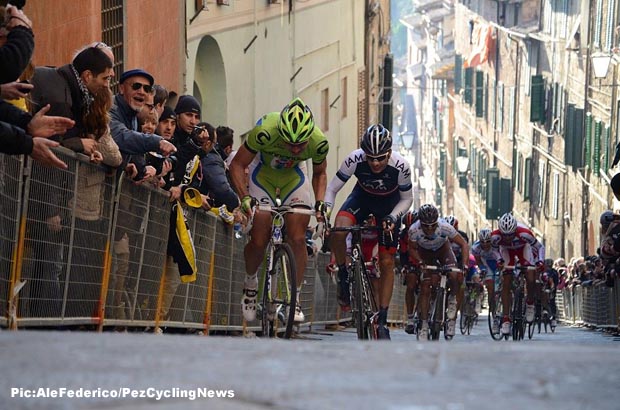 Two years ago I shot this picture in the via di Santa Caterina and in two years it has become viral on the web. I tried many times to protect the copyright, but the more I try the more it’s posted on social media without any control. In the end I have to accept that this picture is everyone’s. It is the best thing that can happen when you want do something really good!

See you next Saturday!
Last part of the route, from Le Tolfe to the ancient gate Porta Fontebranda isn’t what you would expect from such a beautiful place. The roads are hitting the modern suburbs of the town and are twisting from a main crossroads to another to pass from north to west. I also decided to avoid to climb to Il Campo because of the many traffic restrictions to cars (my wife was supporting me both with pictures and morally all the day long). 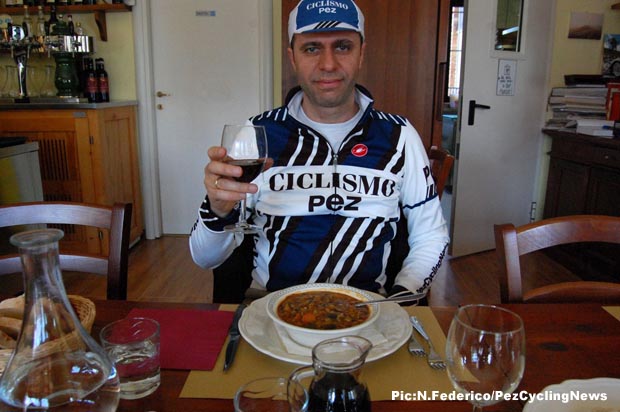 What better than a San Giovese red wine and a ribollita?

So I avoided the very last climb in the old town, the via Santa Caterina, with gradient over 15% in its last part. From the famous corner at the top of Santa Caterina to Il Campo there are few hundred meters more and one very sharp turn at 50 meters to the line. In Siena I finally had my glass of red wine and the local “ribollita”, the special cabbage and beans soup, re-cooked the day later with some bread added, typical from Tuscany. 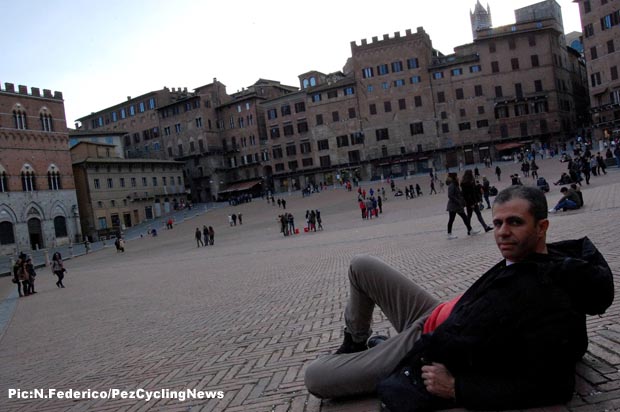 Goodbye from Il Campo di Siena. See you on Saturday 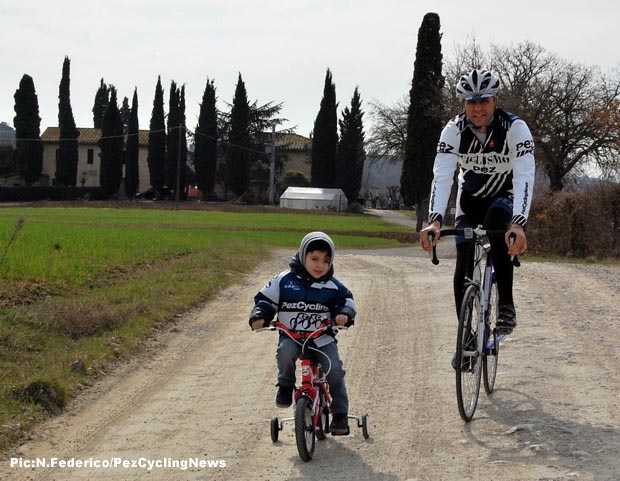 Credit to my wife for the pictures and to my son Mario for the moral support. Looking forward to see him in races in the future!

At the end of the day I also enjoyed the magnificent view of Il Campo, where every year the famous Palio takes place in July and August. In summary: a great day on the roads that this Saturday will see many champions fight for the ninth edition of this very peculiar race. It’s not a Flanders, it’s not a Roubaix, but it has a very Tuscan taste and that special flavor of home. 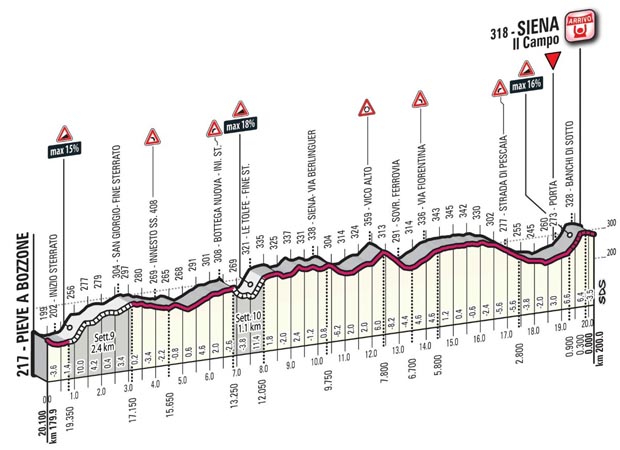 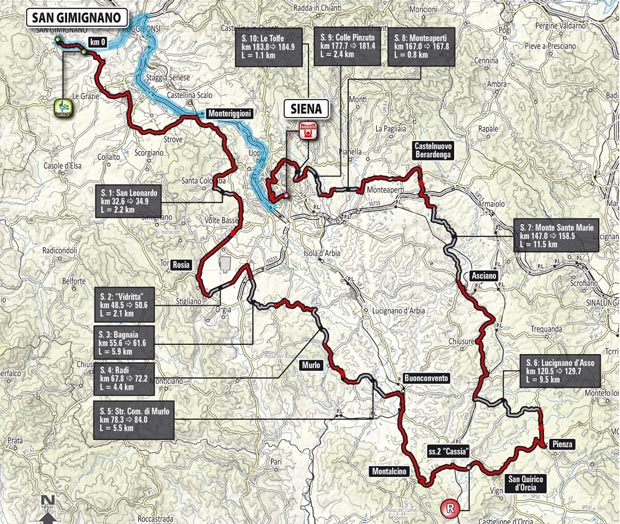 • See the race live at Steephill.tv