Race Report: In a glorious race across the ‘white roads’ of Tuscany, towards the UNESCO heritage city of Siena, it came down to three riders. All eyes were on Alejandro Valverde as they came towards the final climb of Santa Catalina but the win went to the former cyclocross hero from the Czech Republic. Zdenek Stybar knew he could beat his breakaway companions Valverde and the ever-present Belgian Greg Van Avermaet as they attacked up the last climb. He beat Van Avermaet and he broke Valverde to take a truly joyous win.

Last weekend it was the first cobbled classics of northern Europe: cobbles, rain, wind, mud, hard-man attacks, strategic blunders, quiet dominance and the cheeky, happy smile of our favorite Manxman. This weekend saw the riders head to the beautiful and picturesque roads of Tuscany and the first serious rendezvous for the Italian riders. 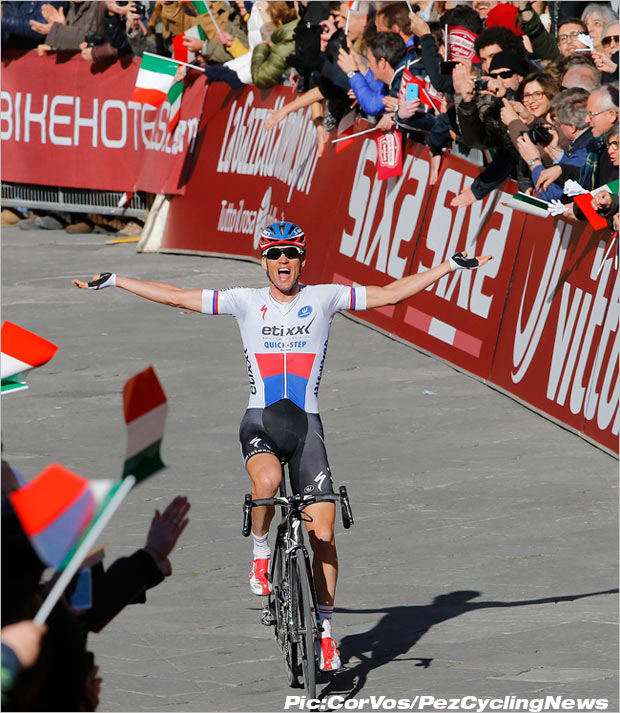 The Strade Bianche races over 200km and includes 50km of farm tracks and country lanes – the famous white roads – as the riders head towards the ancient city of Siena. Steep climbs, testing descents, pot-holes, stones and the ever-present dust often leave the cyclists looking like they’ve just ridden a very dusty cyclocross event. As the riders head to the finish they have to negotiate the narrow streets with the Via Esterna de Fontebranda kicking up to 9% and reaching 16% 500m before the line. Last year’s edition went to Michal Kwiatkowski and he went on to have a stellar year. 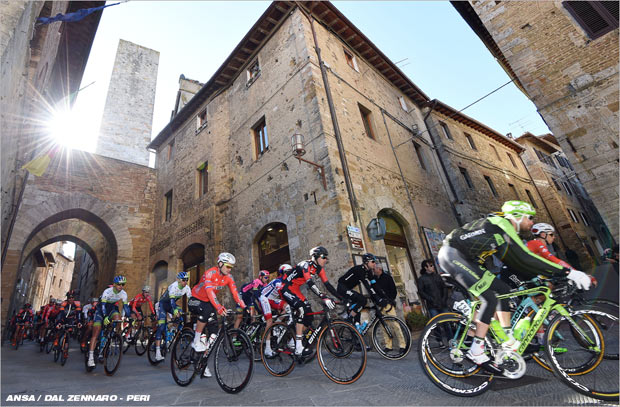 How It Played Out
A number of big hitters were on the start line in San Gimignano including our first real sighting of Vincenzo Nibali but as the race got going it was a group of eight riders who managed to get away and build a sizable lead. They were Arredondo (Trek), Kosjevoj (Lampre), Ovetsjkin (RusVelo), Lozano (Novo Nordisk), Fonzi (Southeast), Pirazzi (Bardiani) and the beiden Nippo pairing of Berlato and Colli.

As the race headed over the first section of dirt roads back in the peloton Movistar was looking strong as they protected Alejandro Valverde. The escapees had an advantage of 6:30 and this was to continue to rise. By they time they’d negotiated the third off-road section the gap had been extended to 7:30.

As the race closed in on the 100km to go point, Katusha and Movistar had begun to eat into the advantage and the gap was coming down. Valverde suffered a mechanical and his team switched off the chase while he recovered but they were soon back on it and the gap was now down to 4:25

Biding Their Time
With the peloton relentlessly riding down the escapees there was a crash in the break and it now fractured with the leaders down to four: Arredondo, Colli, Ovetsjkin and Fonzi. Behind, the two chase teams had been joined by a determined looking Astana and Nibali was being closely marked by Peter Sagan (Tinkoff-Saxo). The combined work of the chase teams had brought the gap down to 1:33 but the big hitters were all sitting in the bunch biding their time and watching each other.

As the race approached Monte Sante Marie at 53km to run, more and more teams had moved to the front as their riders fought for a good position. The break was being mopped up one by one and was now down to just Fonzi and Colli but it could only be a matter of time before they too were gone. Movistar and Astana were the active teams but BMC, Etixx-Quick-step and Sky were all in close attendance. 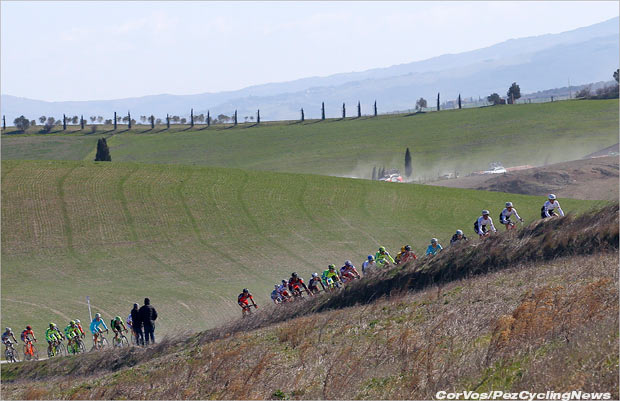 Blowing Apart
And now it was Stybar, Vanmarcke (Team LottoNL-Jumbo), Sagan and Lars Boom hitting the front! The pace was incredible with Cancellara and Valverde also coming through. The bunch was splitting up and all of a sudden a three-man group of Sagan, Valverde and Stybar clipped off the front at 46km to go. BMC was left to chase as it tried to protect Van Avermaet.

With such a long way to go it looked like madness for the three leaders as they held a slim advantage of just 10 seconds but BMC was not making any headway on the narrow section of Monte Sante Marie and the gap was beginning to stretch.

The Great Escape
As the leaders exited the Monte Sante Marie section they held a lead of 16 seconds but with a strong crosswind the next group eventually made the join. This included Van Avermaet, Cancellara, Vanmarcke, Rosa (Astana), Oss (BMC) and Haas (Cannondale-Garmin) but the bigger news was that Nibali was in the next group down, about 71 seconds back with 40km to run.

Orica had also missed the move and was leading the chase behind. Ian Stannard (Sky), last weekend’s hero, had crashed and was out. With nine strong riders up front, Orica was finding it difficult to make much difference to the leaders. Katusha, with Moser, was sitting near the back of the bunch but Tinkoff-Saxo was sitting near the front of the chase group ready to pounce should the break not survive.

Rosa and Haas were beginning to miss turns at the front and the gap was now under 60 seconds. Valverde, whose team had done the lion’s share in the original chase, wanted this break to stay away and was pushing hard, eventually dragging the gap back out to the minute-mark as the race twisted and turned towards the next section of white roads.

Van Avermaet and Vanmarcke made a move to get away, perhaps sensing that this break might not survive but Cancellara and Valverde were quickly on them. Now it was the turn of Oss to try a move and Valverde let the elastic snap as the BMC rider gained a gap of 10 seconds.

In-Fighting
Was this the move of the race as Oss moved away from the break that was beginning to consume itself with attacks and in-fighting? He had made the next section of off-road as Orica was beginning to close on the remains of the break. He had 10 seconds as he made his way through the 800m section of uphill. Van Avermaet was sitting at the back, not obliged to work with his teammate away up front, but the remains of the peloton were desperate to get the chasers back before the came off this section.

It was not to be as Vanmarcke attacked over the summit and went right over the top of Oss. Behind, Sagan appeared to have blown big time and was quickly distanced but Stybar, Valverde and Cancellara were all looking strong as they came together with Vanmarcke. 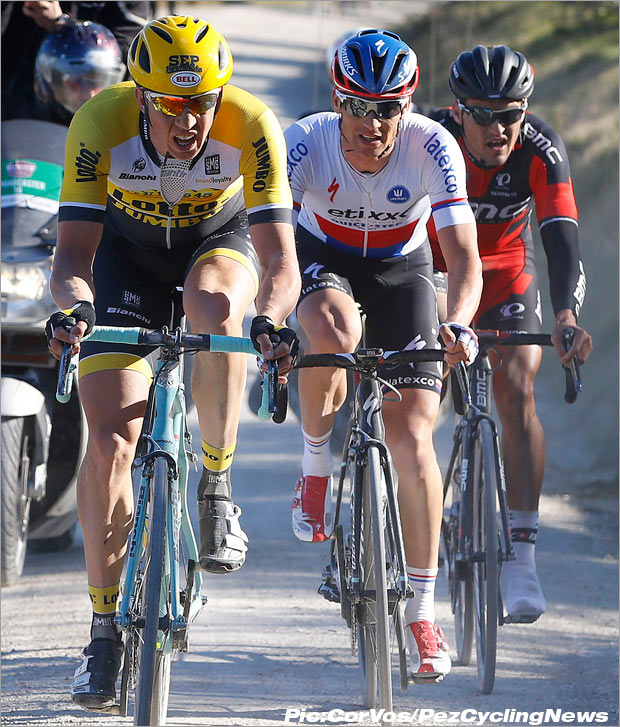 Lotto-Jumbo’s Sep Vanmarke was strong again this weekend, but once again didn’t quite have enough in end.

Final 20km
And now they were five as Van Avermaet, Vanmarcke, Cancellara, Stybar and Valverde were leading the race but Oss and Sagan were getting back on. Next to struggle was Cancellara as Valverde applied the pressure in an attempt to thin the break and keep Astana behind.

Valverde was keeping the pressure on and Stybar was also helping on the uphill section of dirt track. Van Avermaet and Vanmarcke were struggling to hang on but with riders coming and going it was going to be difficult for Valverde to shed the others. It didn’t stop him trying as the Spaniard attacked again only to be brought back by Stybar and Van Avermaet but it meant that Cancellara and Oss may not to get back on…and Sagan had disappeared from the chase.

With two more sectors of gravel roads still to go it looked as if Valverde as the best climber had the best options but racing never goes to plan. The others wouldn’t want to arrive at the finish with the Spaniard as he would distance them on the finishing climb. They were into the last 15km, and one more section of white roads still to ride.

Cancellara was making his way back with Oss and not far behind was Rosa who must have passed Sagan on-route. And now Van Avermaet attacked as he couldn’t afford to wait until the finish. Onto the final steep section and Stybar could see that Vanmarcke was struggling so he pushed the pace and took Valverde back up to GVA and we had three riders on the front with the white roads done and dusted for another year.

Stybar and Van Avermaet Must Attack?
10km to run and the three-man group was streaking towards Siena with Vanmarcke attempting to close the 18-second gap, and Cancellara, Oss and Rosa further back. The winner would come from this leading trio unless they sat up and started to play games. Stybar and Van Avermaet would have to try something as Valverde should be strongest on the finishing climb.
Streaming into the city and the lead trio was still working together but they were definitely watching each other. Behind, Rosa had pushed away from Cancellara and Oss had been forced to do some work to bring him back. Vanmarcke had closed to within 15 seconds of the leaders as Van Avermaet moved to the back of the group.

Van Avermaet Beaten, Valverde Broken!
Van Avermaet had been missing turns but now came to the front as they headed to the final climb. The riders were saving energy for the final ascent and Vanmarcke was just five seconds behind as they came onto the climb. As expected, Van Avermaet was the first to attack and Valverde took up the chase but, as so often, he appeared unable to follow the acceleration and it was Stybar who was forced to go after him.

Stybar went so fast that he not only caught GVA but went right past him and the BMC rider just could not follow him. Behind, the man-most-likely had blown and Valverde was forced to roll home and could only make sure that he stayed ahead of Vanmarcke. Stybar rolled home on his own, arms in the air, to take the win with Van Avermaet in second.

Despite leading Valverde to the final climb it was the Czech rider who was the most hungry today and all eyes will be on Zdenek Stybar when Paris Roubaix come along. It was a fantastic win for the Etixx-Quick-step rider and he loved every minute of the final meters of the race, celebrating all the way to the line.

Keep it Pez for Ale’s Roadside from Strade Bianche, news from Paris-Nice and Tirreno-Adriatico this week