A superb performance by Nicole Hanselmann saw her earn the first professional victory of her career on the opening stage of the Ladies Tour of Norway.

The Swiss rider crossed the line solo in wet conditions in Halden, maintaining a gap of nine seconds over Thalita de Jong and fourteen seconds over Luncinda Brand (both Rabo-Liv) who led the bunch home.
The result puts Hanselmann into the race lead for Saturday’s stage 2.

Hanselmann made her move on the finishing circuit in the city centre with just over two laps to go but explains it wasn’t a planned move, just instinct.

“It wasn’t really an attack. I went first around the corner and I got a gap. I thought because there were short narrow roads with a lot of corners that I would just keep kicking,” the 25-year-old said.
“Throughout the race I had really bad legs and when I was in front they just felt good. I didn’t know what was happening behind me but I first heard 8 seconds, then 12 seconds and the biggest one was 17 seconds.”

“I just kept telling myself that I would be faster than the bunch in the corners then at least keep the same speed as them as there weren’t many straight roads,” she said.

Hanselmann, the longest serving member on Cervélo Bigla Pro Cycling team has shown great form in recent weeks. She was runner up in the Swiss national road and time trial championships and finished third on the final day of Thuringen Rundfahrt.

She followed that up last weekend with second place behind teammate Gabrielle Pilote-Fortin in Grand Prix Oberbaselbiet. “It has been a good month for me. I’m having a good time.”

Team Manager, Thomas Campana explained that Hanselmann’s performances of late has earned her a two year extension as she’s part of the development structure of the team. He elaborated on the day’s events.
“Our plan at the start of the race was to control the attacks. We managed to do so and be in most of them except one. As we got to the city there were a lot of corners which made it dangerous in the rain.

“Nicole made an unbelievable attack. The bunch was really chasing her and she stayed away so it was an incredible performance. Her development in the last 8 weeks has been amazing. She’s the longest member of the team and forms part of our development pillar of the team which we’re increasing for next year.”
Stage 2 continues on Saturday at 13:00 local time, the livestream towards the end of the stage can be viewed here. 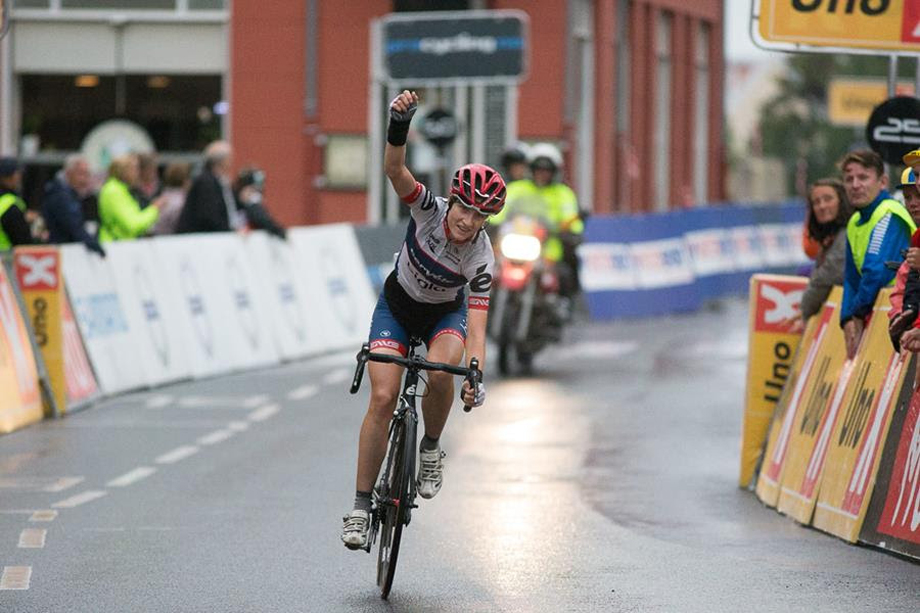