Under overcast skies and unseasonably low temperatures the top professional cyclists across the U.S. battled for crowns in the 16th annual Sunny King Criterium. Winners took the early leads in the 20-event calendar for USA Cycling’s Professional Road Tour. 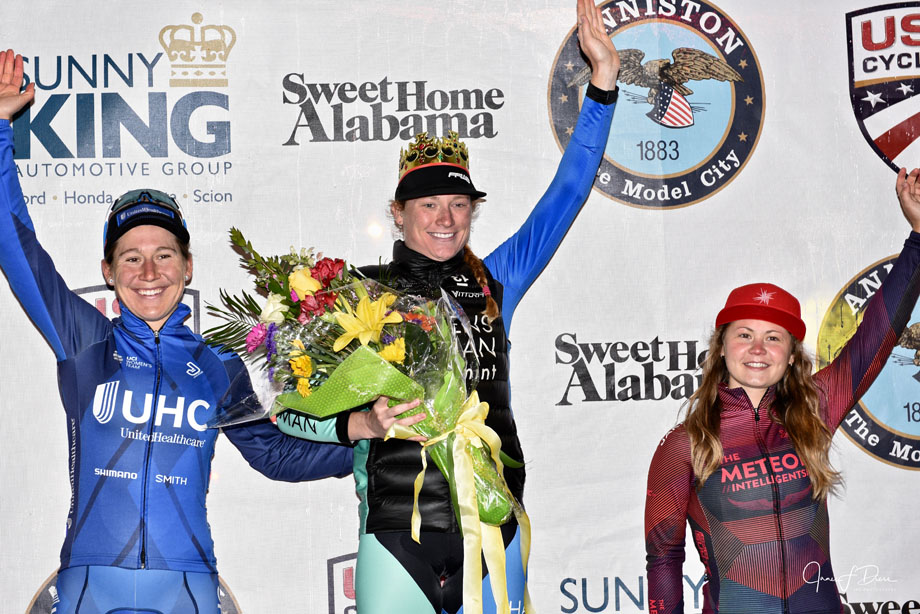 The Alabama Cycling Classic combines the well-established Sunny King Criterium with the Piedmont Road Race for two full days of road racing. The Sunny King Criterium is the first stop on the 20-event calendar for USA Cycling’s Professional Road Tour. Saturday offered 21 categorized races for a variety of age groups and skill levels, capped under the lights with the signature PRT races for Cat 1/2 Pro Women and Cat 1 Pro Men.

The Pro Women’s criterium featured 54 riders all bunched together for the first 28 minutes on the four-turn, one-kilometer course. The field contained five previous Sunny King Crit champions – Lauren Hall of UnitedHealthcare (2017), Samantha Schneider of ISCorp Pro Cycling (2016), Erica Allar of Rally Cycling (2012), Laura Van Gilder of Mellow Mushroom Pizza Bakers (2007), and Tina Pic of Colavita-Bialetti Racing (2006 and 2008). It would be two 24-year-old riders taking the spotlight under the street lights in 2018. 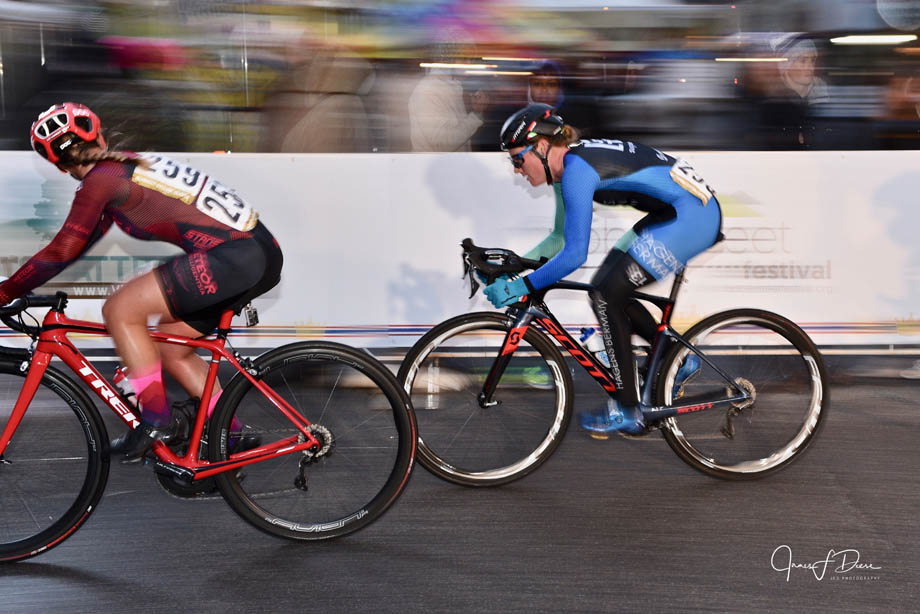 “I’m really excited. It’s only my second PRT victory,” said Williams, a new edition to the Hagens Berman-Spearmint women’s UCI professional team, on her winning her first try in the Sunny King Criterium. “I started racing last spring, so it definitely affirms that I belong here. I’m really pleased how it went tonight. I definitely did not expect to win.”

This time last year Williams was on a small team and won a road race at the Joe Martin Stage Race. She recently earned a graduate degree from Northwestern University, a school she represented with a fourth place finish in the 2017 U.S. Collegiate Criterium national championships.

“Lauretta went, and I was in a pretty good position to follow. I was able to jump on and get to her wheel about three-quarters of a lap later. Then the third girl, Harriet, was on us pretty quickly after that,” Williams said about the winning moves. “We all worked together pretty well, and we were able to put some time in (for the lead). For a while, I thought that the peloton was going to catch us because they were on the same stretch as us. Then I realized we had a good lead.”

It rained most of the morning in Anniston, and looked like riders would just have to contest with wind and cold temperatures dipping below 43 degrees fahrenheit. But the dark, low-hanging clouds produced more rain in the women’s race, making teams ride more conservatively.

“We had a couple of strategies in our pocket,” Williams added. “We thought today would be, given the conditions, a good chance for a breakaway. We wanted someone on the break, and it happened to be me. I grew up in the South, in Tallahassee, Florida, so it’s nice to win in Anniston.”

A 30-rider bunch sprint behind Owen was won by ISCorp’s Schneider (West Allis, Wisc.), finishing fourth overall 1 minute and 3 seconds behind the winning time. Along with four teammates, she said they were focused on this being the first event of their 2018 season.

“We came to be aggressive, hoping to take the crown back,” the 2016 Sunny King winner said. “We missed the (winning) move, unfortunately, but we were still able to get the field sprint for fourth. We started the season on a relatively high note, I would say.

“It was a pretty windy day and chilly. We had a rider floating in between for a while, just couldn’t quite get there. That’s bike racing,” added Schneider, who said she is already planning to return to Alabama next spring. “I’d like to get that crown back.”

Other notables for the women included Allar in fifth place, Hall in 20th and Pic in 27th. 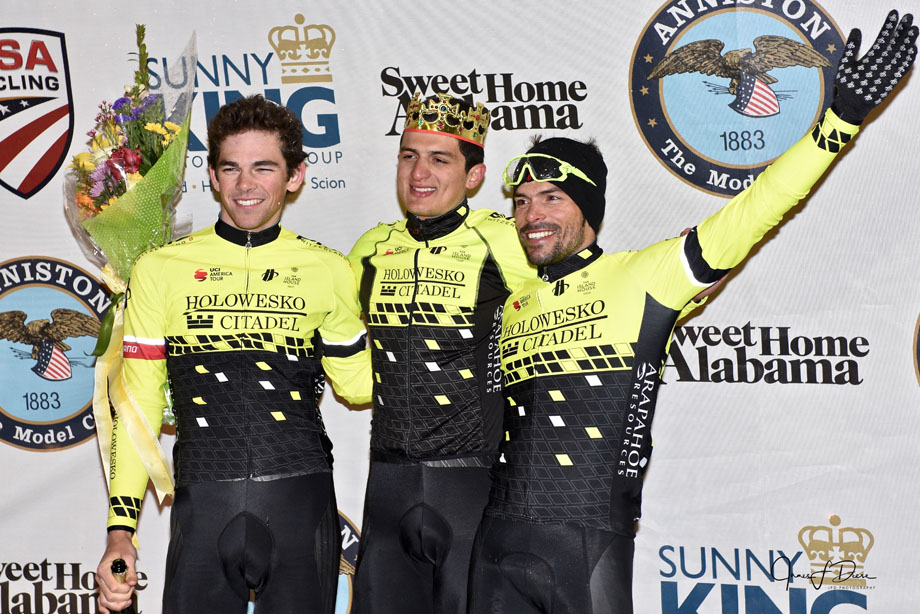 The men’s 60-lap criterium took 1 hour, 34 minutes and 33 seconds to complete, for the Holowesko-Citadel teammates. The 65-rider field battled wind, rain and cold all night. Early in the race, after the first 10 laps, it was Gomez who attacked the field.

“I think the wet road made it easier to be in the breakaway. It was pretty cold. The weather made it hard,” said Gomez, a 23-year-old Colombian who moved up to the UCI Pro Continental team this year. “I’m pretty happy with how my team worked today. We came with a plan of winning the race. I just went, you know, I didn’t know I was going to make it to the end, but sometimes you find your legs. I just kept going, and going.

“Here in the States, this is actually one of my first big wins,” added Gomez, who finished sixth in Anniston last year. “I’m happy with this. I’m looking forward to getting more.”

It is a fourth consecutive year that a Hincapie Racing team has captured the top spot in the men’s race in Anniston. Rhim said the strategy was similar to last year, when John Murphy (Horse Shoe, N.C.) won the criterium and he finished fourth.

“I think it was Murphy, Oscar (Clark) and I, last year, we just tried to make it as easy as possible for Murph to win in the sprint. This year we had the same kind of attacking mentality,” Rhim explained about race tactics. “We just wanted to take the race before everybody else and not be on the offensive at all. I think you saw from the gun that we just attacked until we got someone off the front. Gomez was the first guy to go, the strongest guy to go.”

Gomez, eventually joined by Rhim, would lap the field. Teammate Ruben Campanioni, a Cuban cyclist who lives in Miami, Fla., would finish third in the field sprint for a Holowesko-Citadel sweep. He finished just ahead of Daniel Holloway (Boulder, Colo./Texas Roadhouse Cycling Team), the reigning U.S. Amateur Road Race champion for Category 1 men.

“Once I got across, I kind of got confused where everybody was, so we had to balance riding hard enough so we didn’t let Holloway come around. We don’t want to sprint Holloway. But also, we wanted Joe (Lewis) to stay off the front so he got a good result.”

“This is a team that we are taking to Joe Martin Stage Race next week, so expect to see us do the same thing there. Hopefully I’ll go to Redlands too,” added Rhim. “This is a great start to the PRT. Hopefully we’ll just get more success.” 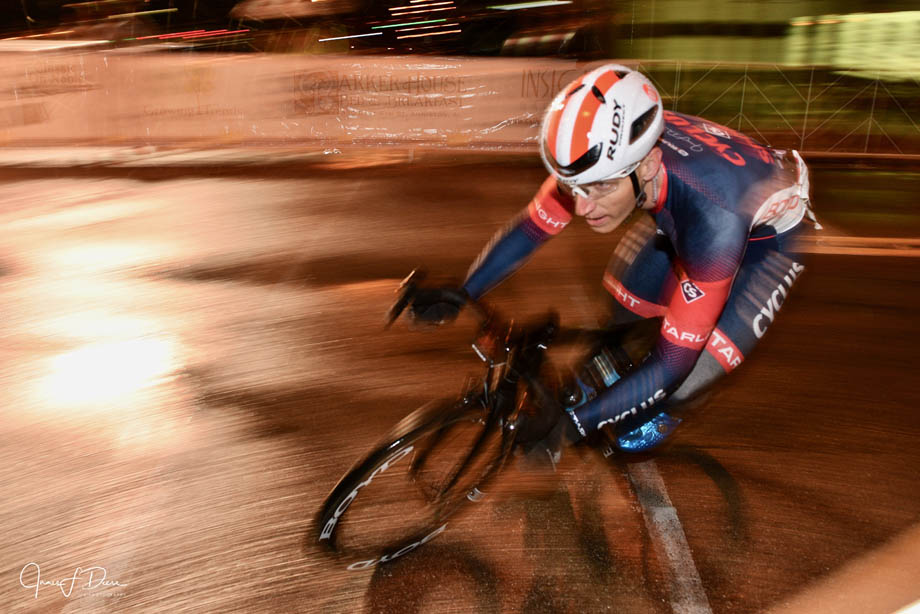 About Alabama Cycling Classic
The Sunny King Criterium began in 2002 as Anniston’s signature cycling event for professional and amateur male and female cyclists from around the globe. The start/finish line for the race is located at 11th and Noble streets in downtown Anniston, with 21 categorized races for adults and juniors. The criterium is the first of 21 events on USA Cycling’s Pro Road Tour. Nine categorized road races for men and women will be held on Sunday for the Piedmont Road Race. Admission is free for spectators. All races are managed by Start Smart Cycling.