Tour’17 Roadside: After two ‘flat’ stages, in profile and excitement, the 2017 Tour de France came alive as it entered the Pyrenees on Thursday. Ed and Martin were ‘Roadside’ to take in the fun in the Spanish border country.

Our boy Stevie Cummings was clear solo well into the last 10K and we were thinking about interview questions – but the Sky machine is unstoppable – or maybe not, but more of that in a moment and Steve was chewed up and spat out. 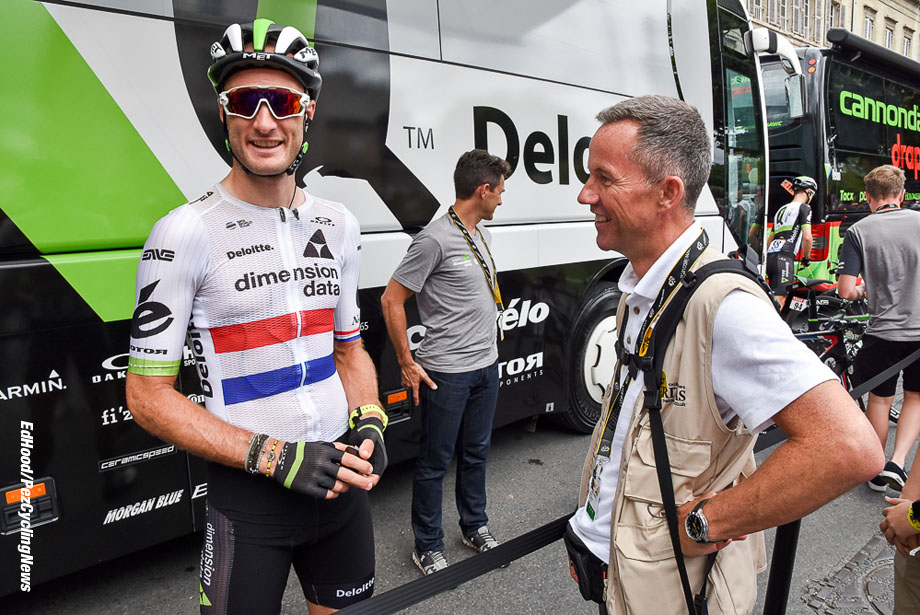 That big smile from yesterday morning gone – just a mask of pain and disappointment. 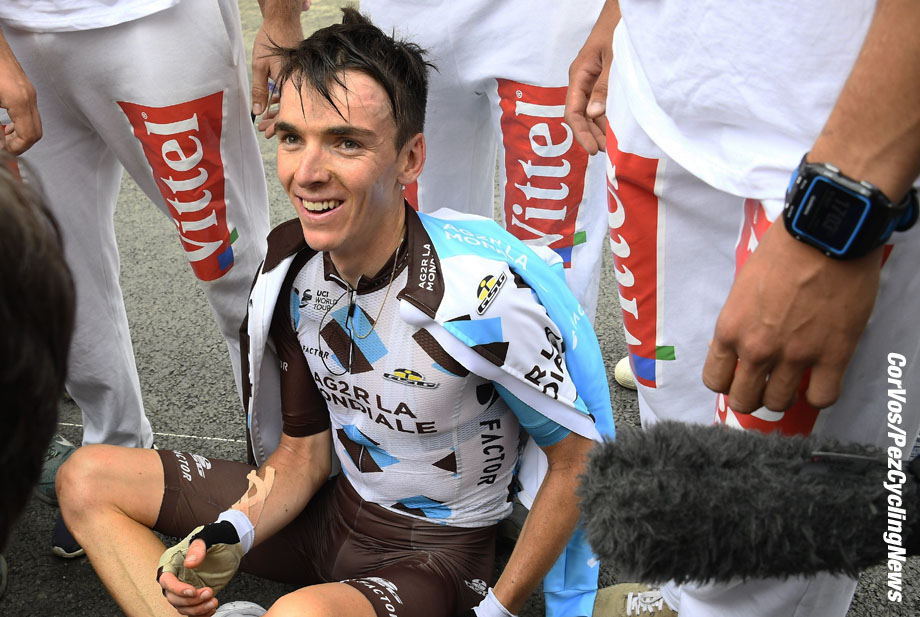 Sky drive it all the way home, destroying Quintana and Contador in the process – Bennett tries his hand from this ‘Royal group’ but Landa claws him back. Froome must want the stage – but NO! It’s Bardet first to the line with Froome dropped in the savage uphill sprint. 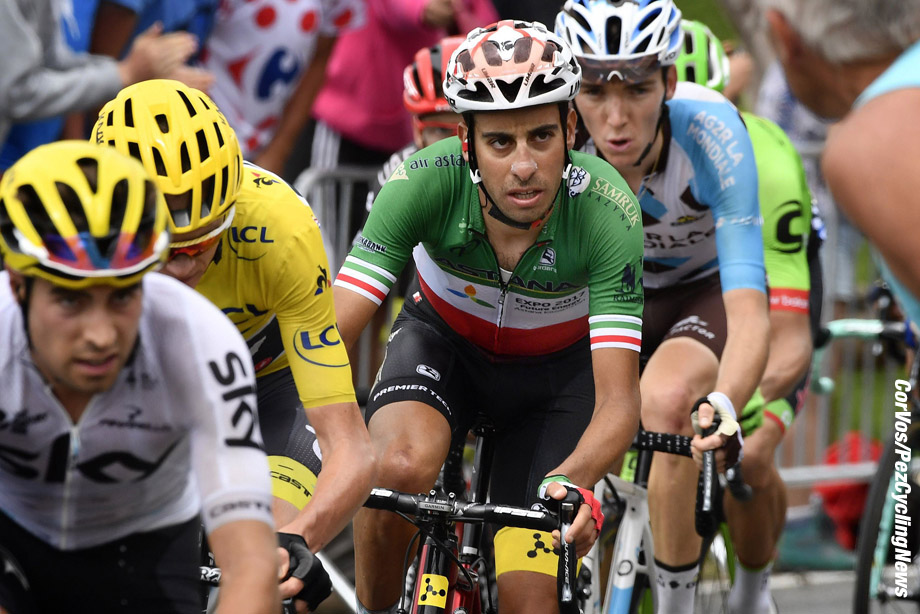 PEZ is in our digs in Spain, where we hi-tailed after the Col de Mentes where we embedded today; Bardet the stage, Aru in yellow, Froome cracks, Quintana and Contador toasted – almost too much to absorb! 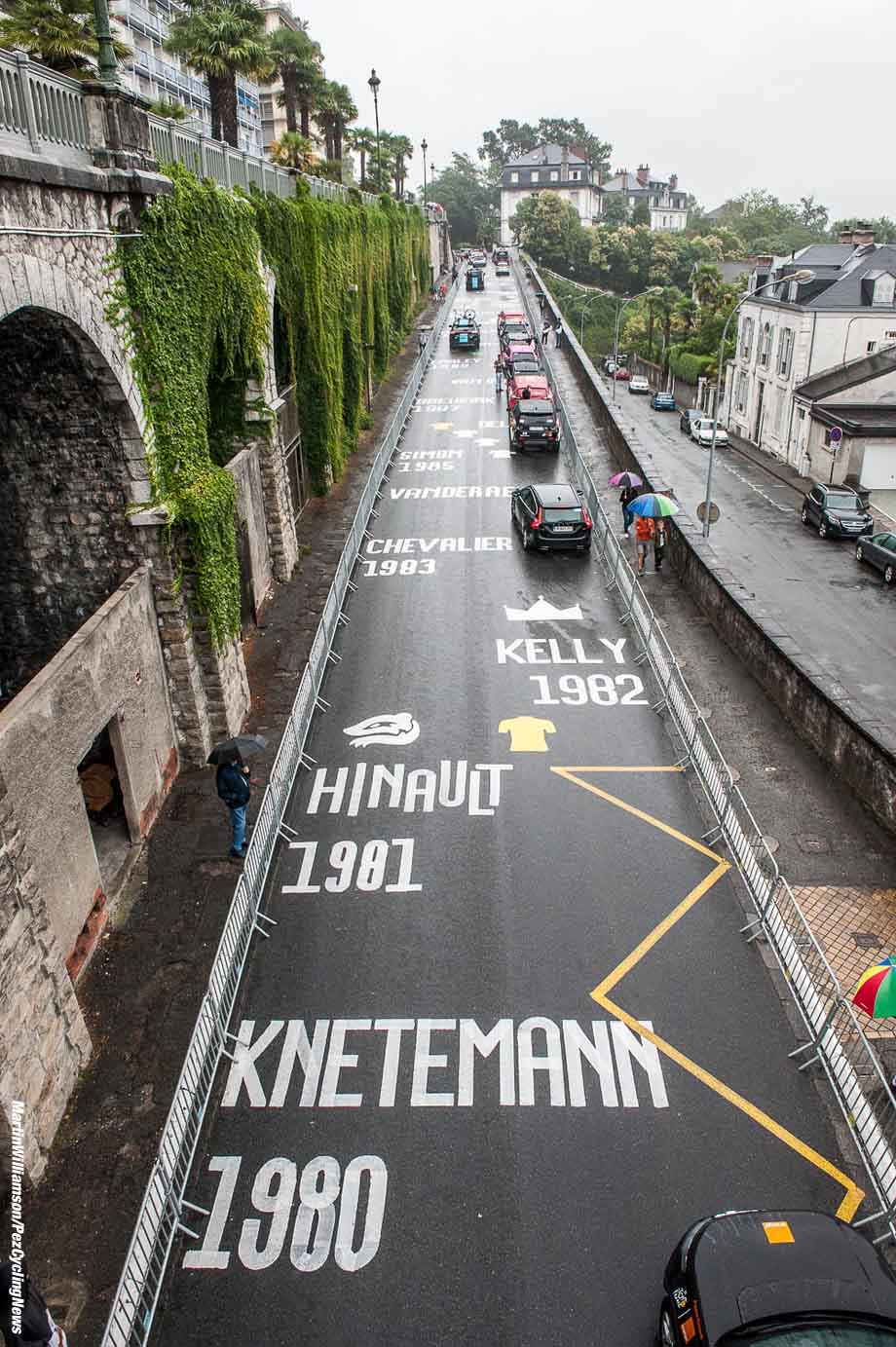 We never imagined this when we were admiring the ‘previous winners’ tarmac art in the drizzle at Pau, this morning . . .

. . . The Stones with ‘Miss You’ for the second day – we’re not complaining.
The hotel told us we were a day late, which we weren’t; the wi-fi was dire; all the restaurants were closed and we had to settle for a ‘Quick’ burger and french fries. Yes, the glamour of being ‘on Tour’ has kicked in. To start the day, Ed browsed the buses whilst Martin got the glam gig in le Village. 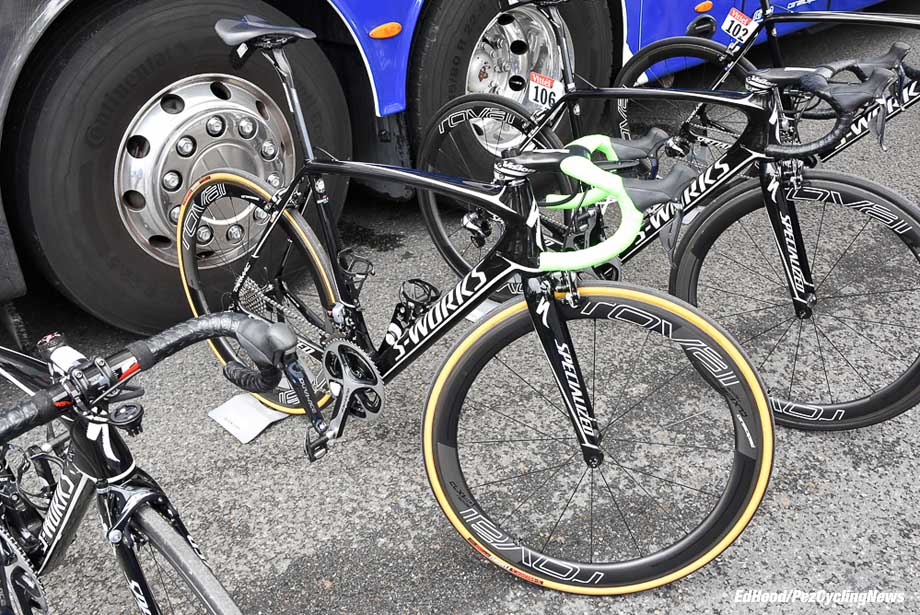 It’s back to reality today for the sprinters; ‘gruppetto!’ and there’s none of that disc nonsense on Kittel’s bike, back to rim brakes, every gram counts on HC climbs. This has me confused though; on the stage where they’d be of most benefit he doesn’t ride them? 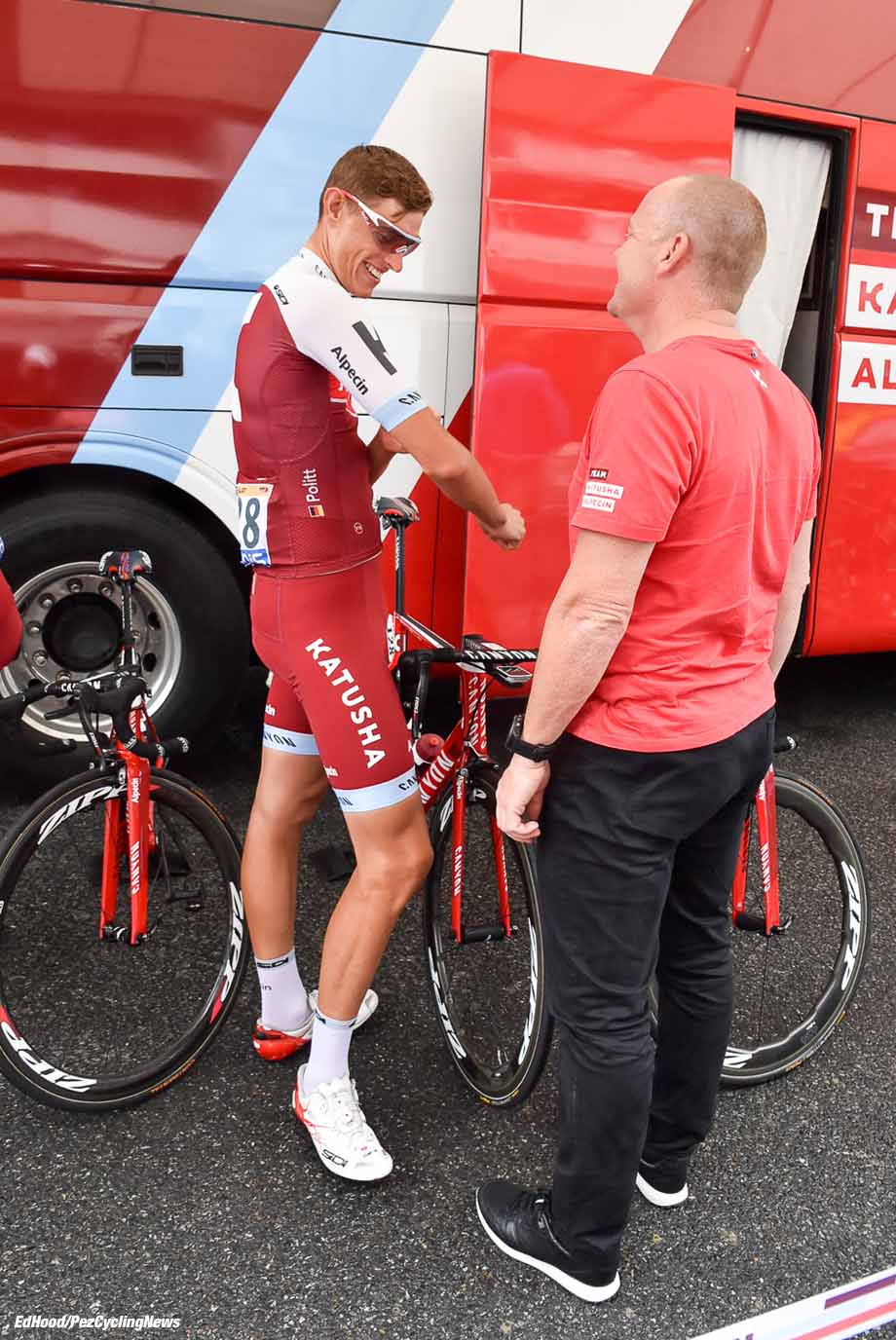 We’re heading into the Pyrenees today, out of a damp and grey Pau. The first man we encounter is lanky German, Katusha’a Nils Politt; one of his first pro rides was in the 2016 Copenhagen Six Day and there was of jealousy about how he’d landed a contract with a World Tour team – within weeks he was in the thick of the Spring Classic action. His rides stilled the envious tongues. 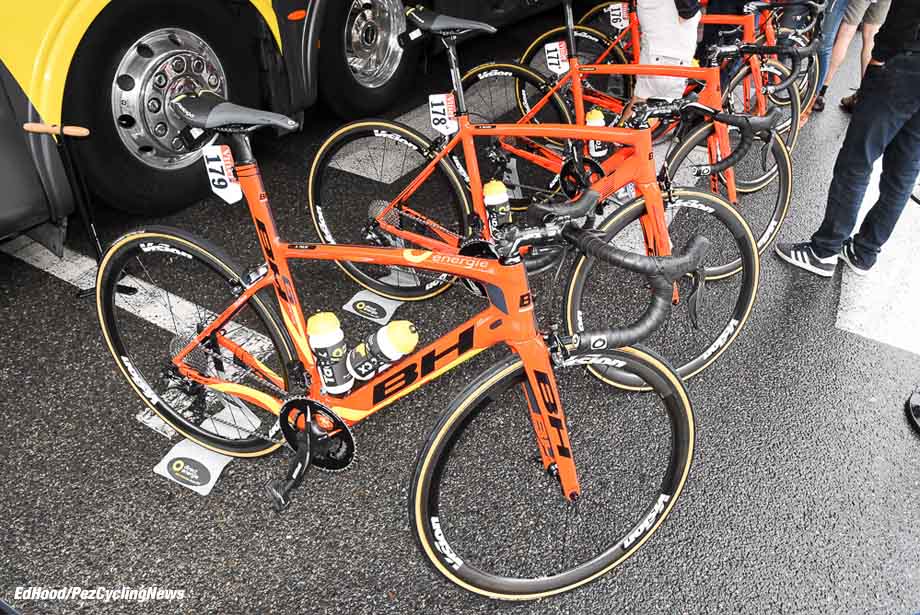 It’s hard not to grab the odd snap of bicycles as you peruse the bus park; we like the color of the Direct Energie bikes but the decals don’t show up at all well in pictures or on TV. However, Angelo Tulik’s mount with yellow hi-lites and solid black decals looked much more striking. 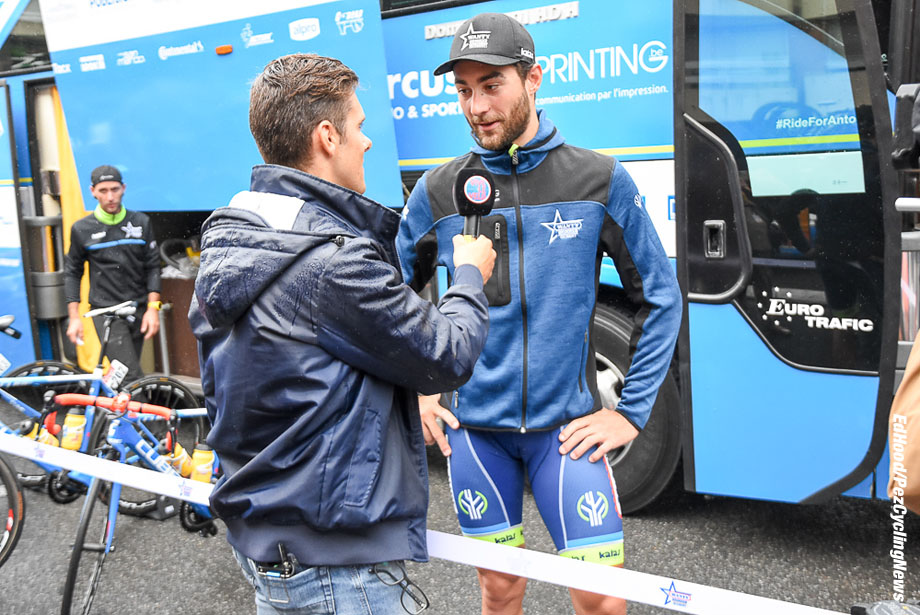 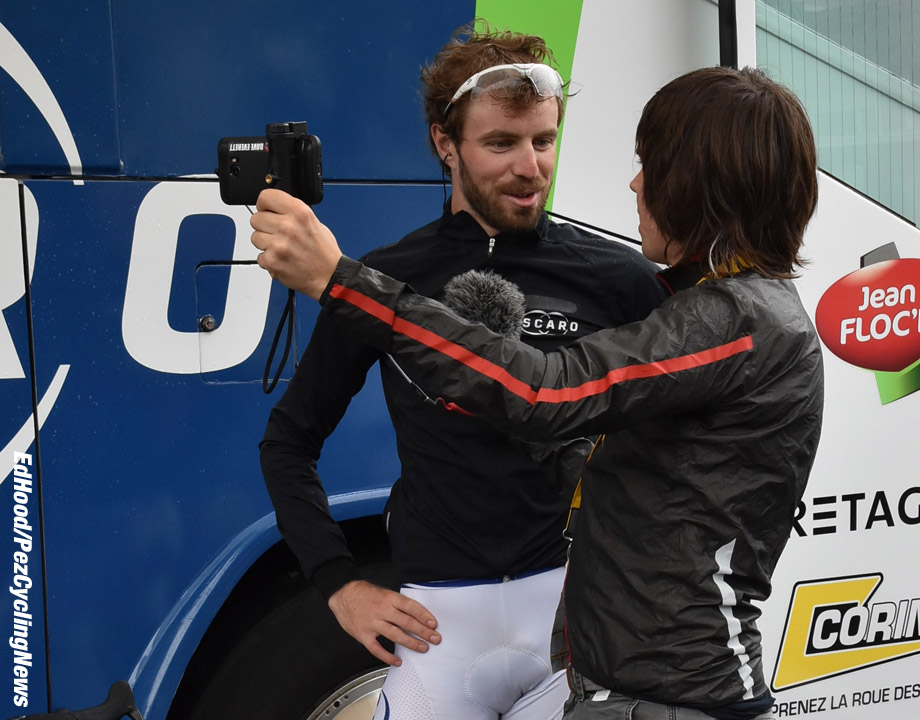 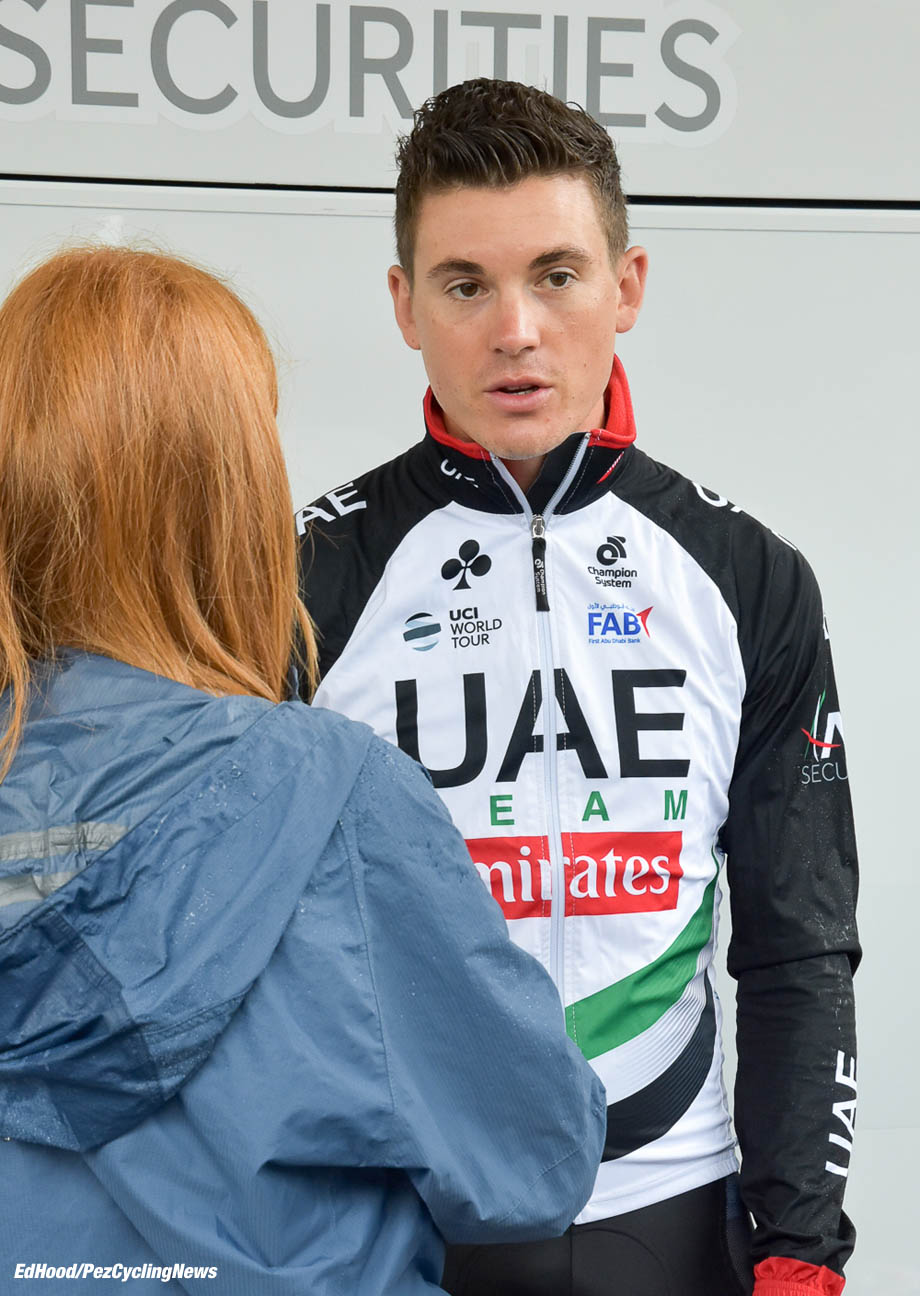 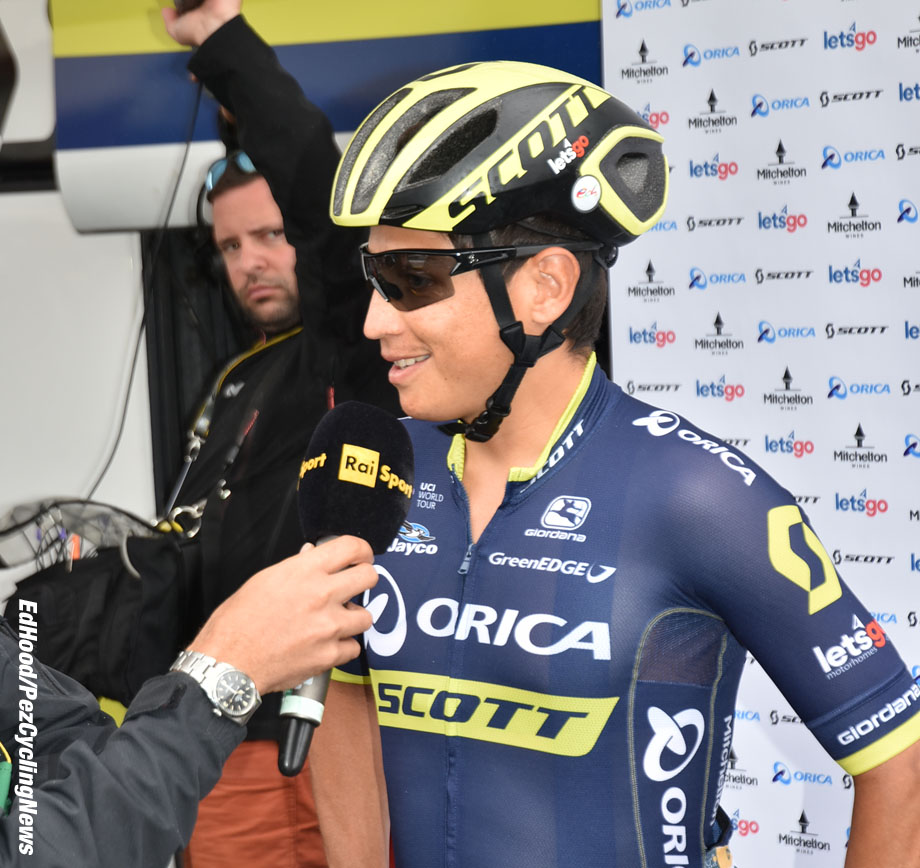 Despite the rain, the interviewers were out in force with lone break hero, Kevin Van Keirsbulck, ever-improving sprinter Dan McLay, twice Primavera podium finisher Ben Swift not forgetting Giro and Vuelta 2016 podium finisher, Esteban Chaves all getting grilled. Orica PR man, ex-pro John Trevorrow told us that Chaves has no real ambitions in the race, the Dauphine was his first race since the Herald Sun Tour and he’s just trying to find the rhythm of the peloton again. 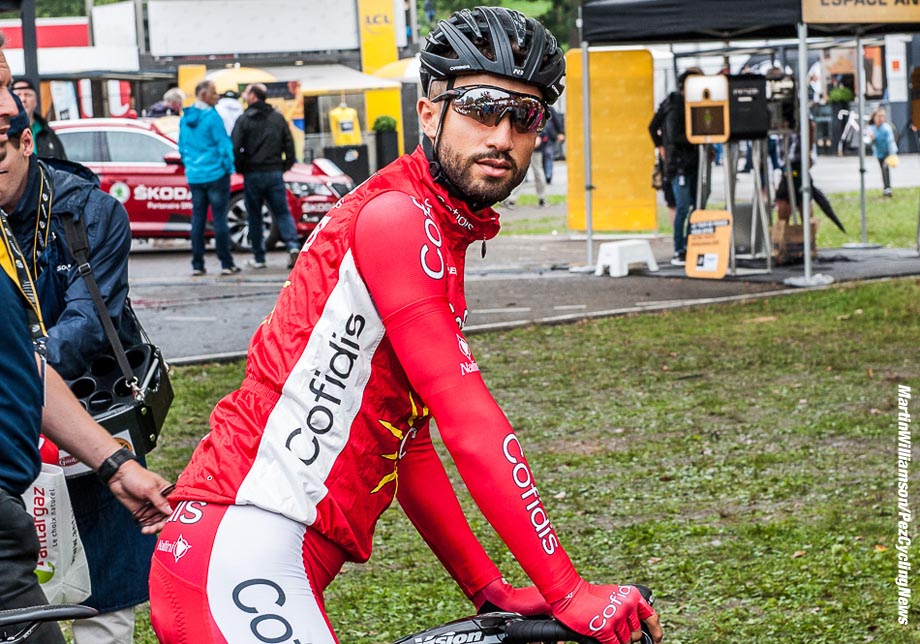 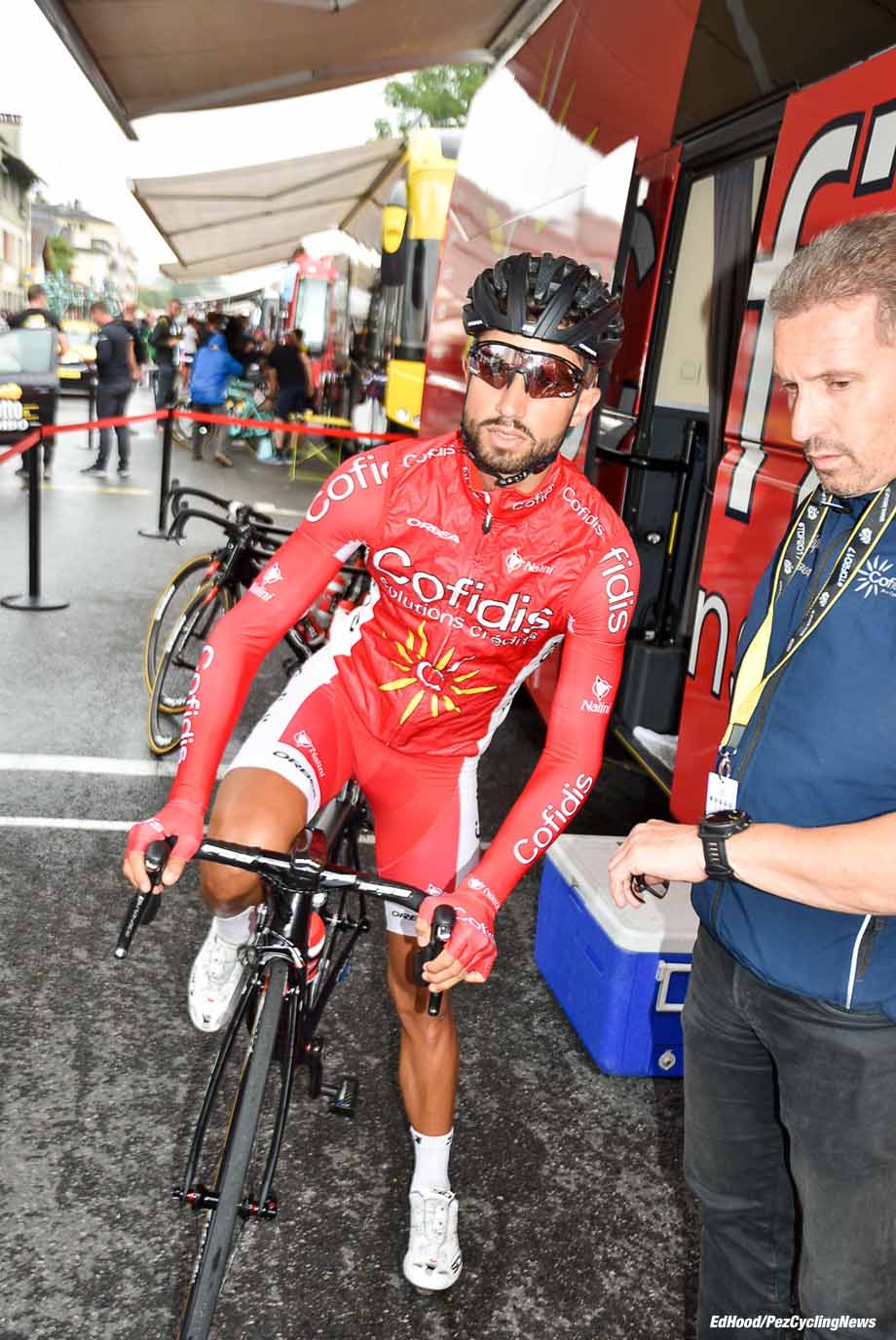 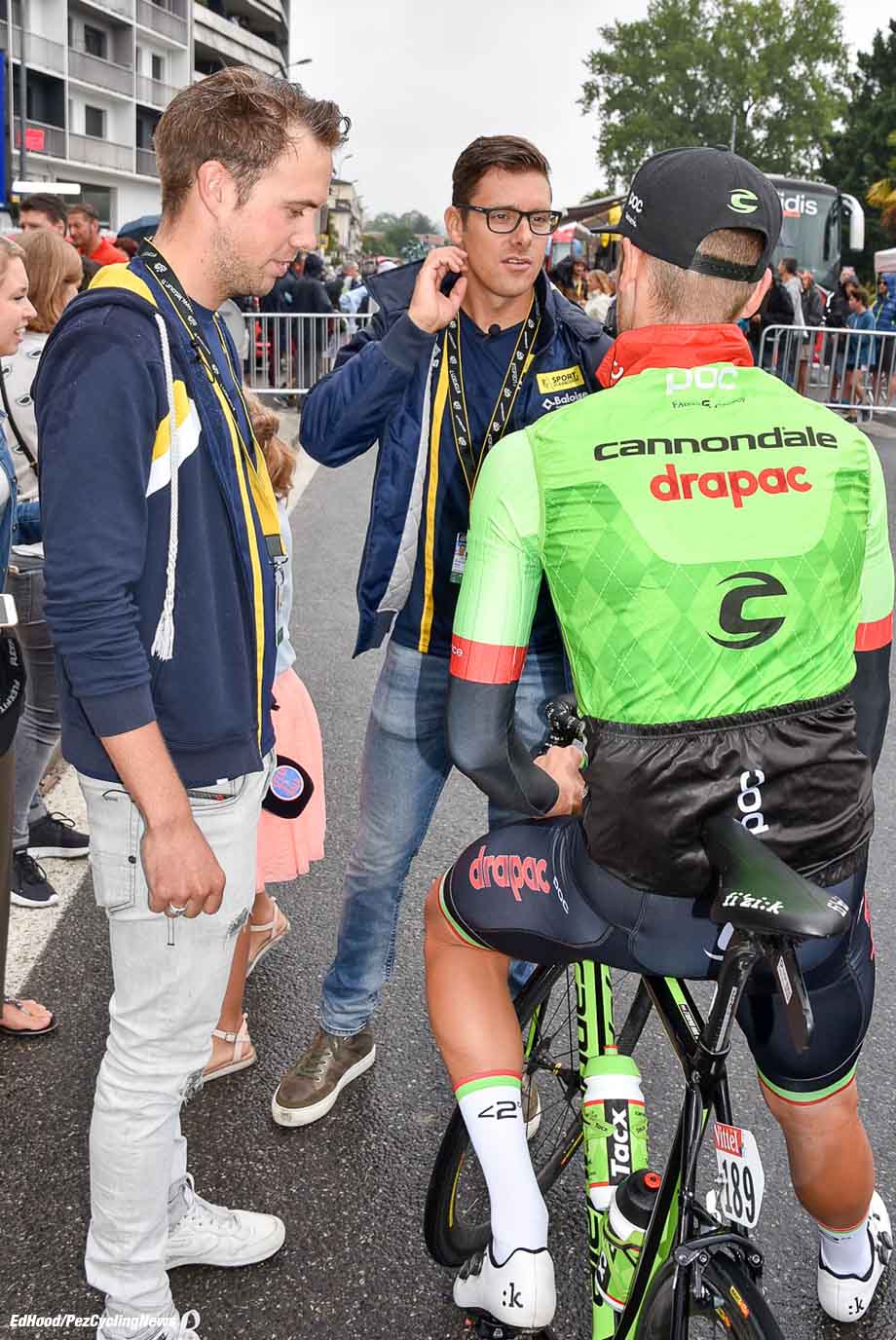 There’s a familiar but incongruous face, Belgian former world madison champion and six day man, Kenny De Ketele. He’s working for Belgian media with madison partner, Moreno De Pauw – with Cannondale’s Dylan Van Baarle as their interviewee; ‘Hey Kenny, too many hills for you in these parts, my boy!’ 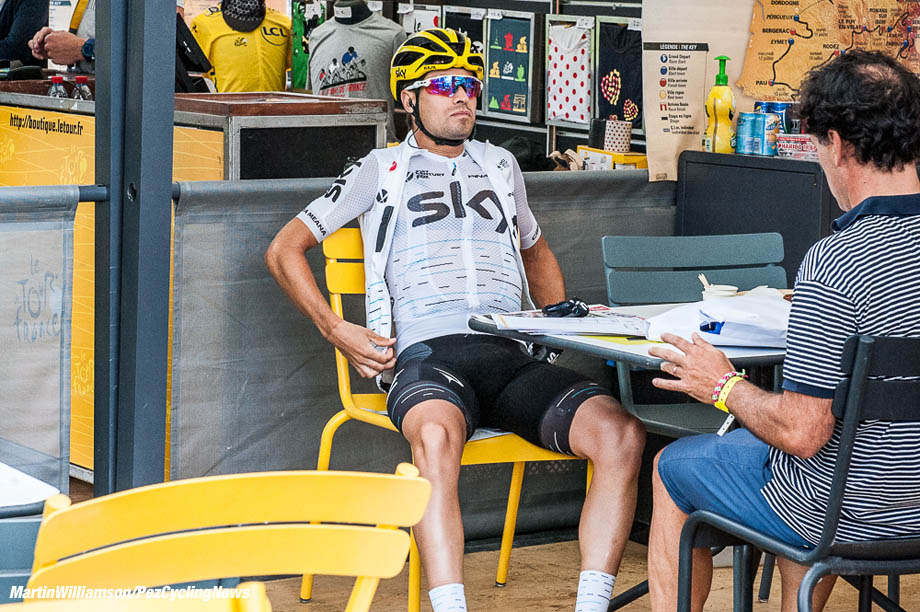 Martin caught Landa relaxing in the village, he’d have earned that coffee by the end of this day.
Off we go. . . Cote de Capvern is the first ascent of the day coming just after 50 K, a 4th cat. around five K long, not too savage. Then the Col de Ares next, 7.4 K @ 4.6% average – the average is deceiving, there are ‘flat’ sections in there but some real swinish sections that the sprinters will hate. Low cloud at the summit makes photography a waste of time and the descent is a video nasty – technical and slippy in the drizzle. The third categorized climb of the day; the Col de Mente, scene of Luis Ocaña’s notorious crash in the 1971 Tour de France.

The Spaniard had put big time into defending champion, Eddy Merckx to take the maillot jaune. But a wounded Merckx was a dangerous beast and the big Belgian vowed to attack every day to the end of the Tour. Which is exactly what he did and on the stage 14 the Spaniard crashed on the descent of the Col de Mente in a rain storm of biblical proportions. All the favorites came down on what was virtually a river streaming down the road. The only man who didn’t get back up was yellow jerseyed Ocaña – the Tour was over for him. He’d go on to win Le Tour in 1973 but in absence of Merckx that year his win didn’t carry the same cache. 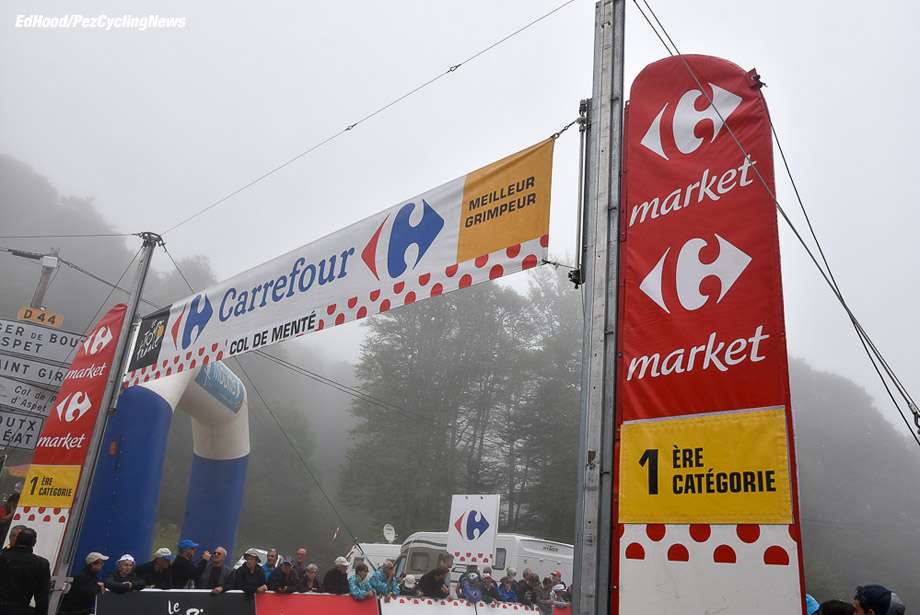 The Mente doesn’t carry HC status but is a tough nut with average grades steeper than the final two HC ascents – and we like the association with the late, great Luis. Park up, have a beer in the gite then pick our spots near the summit. Stevie Cummings is in the break we hear on race radio, as is Marcel Kittel – no doubt to try to take the sprint points at the intermediate and give himself a bit of a buffer for the big final climbs. 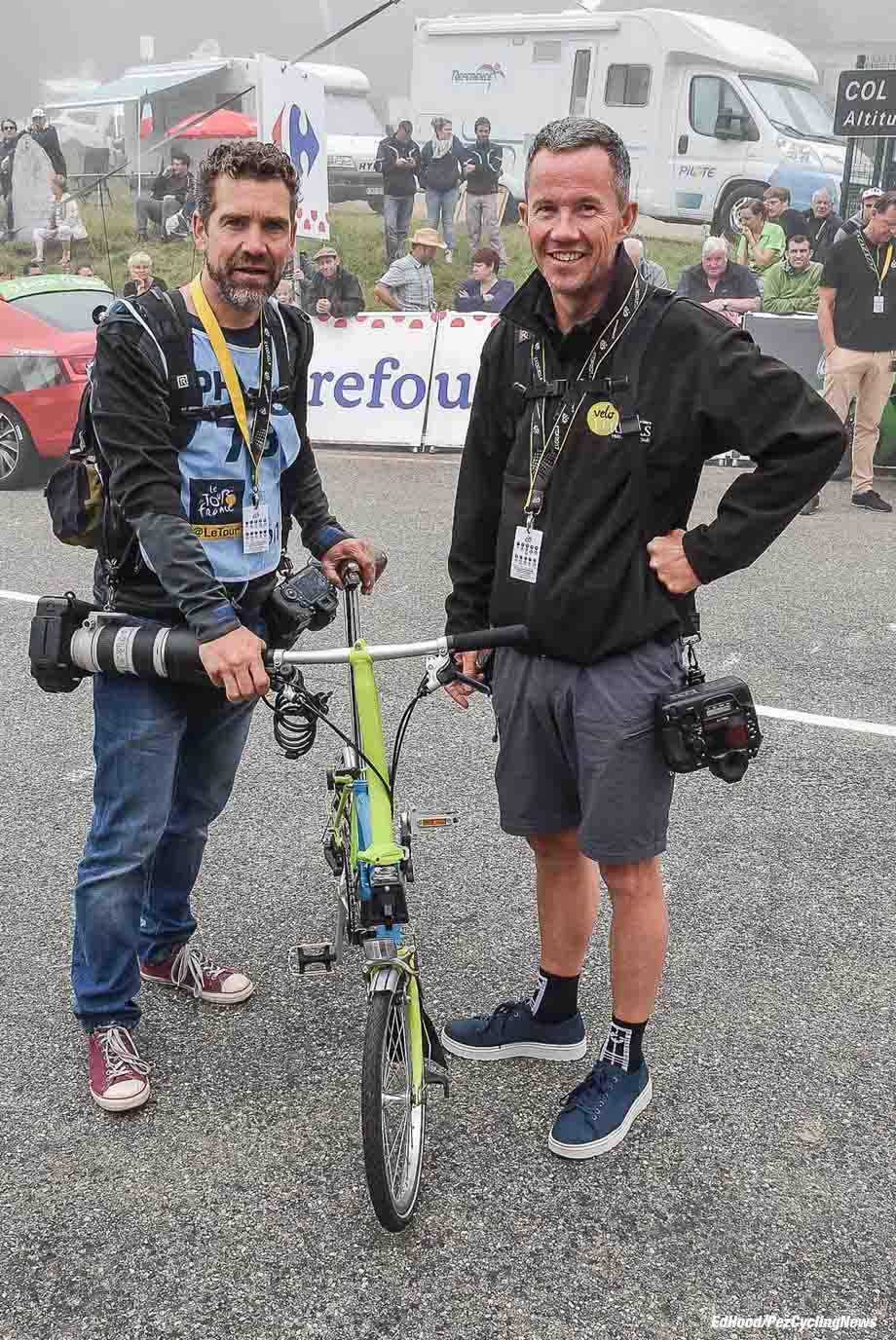 It’s amazing who you meet at the top of a col – Leon Van Bon, ex-pro and former Tour stage winner as well as Dutch champion and Worlds medallist is a photographer these days and uses his folding bike to get around. 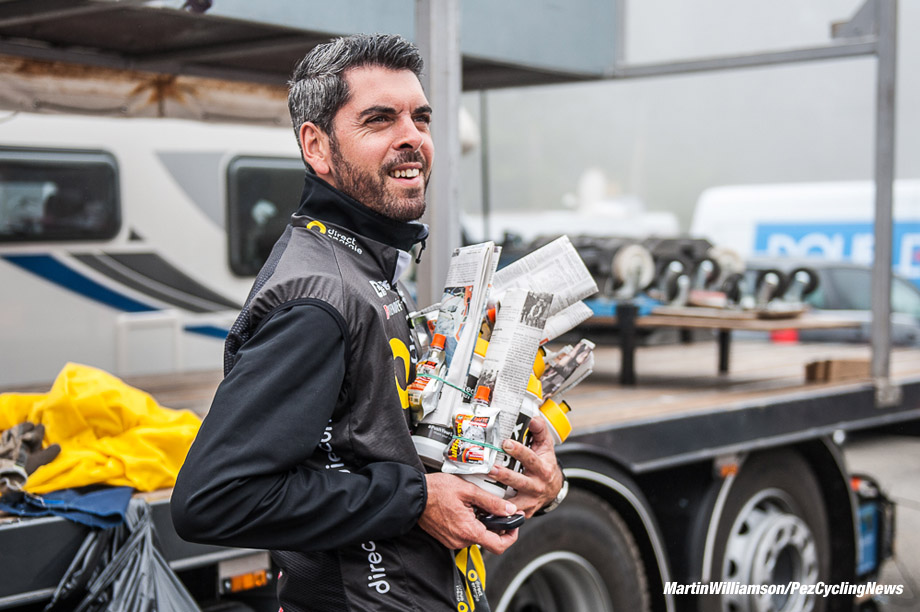 Meanwhile the Direct Energie soigneur is well organized with gels and newspapers for up jerseys taped to the bottle he’s passing up. 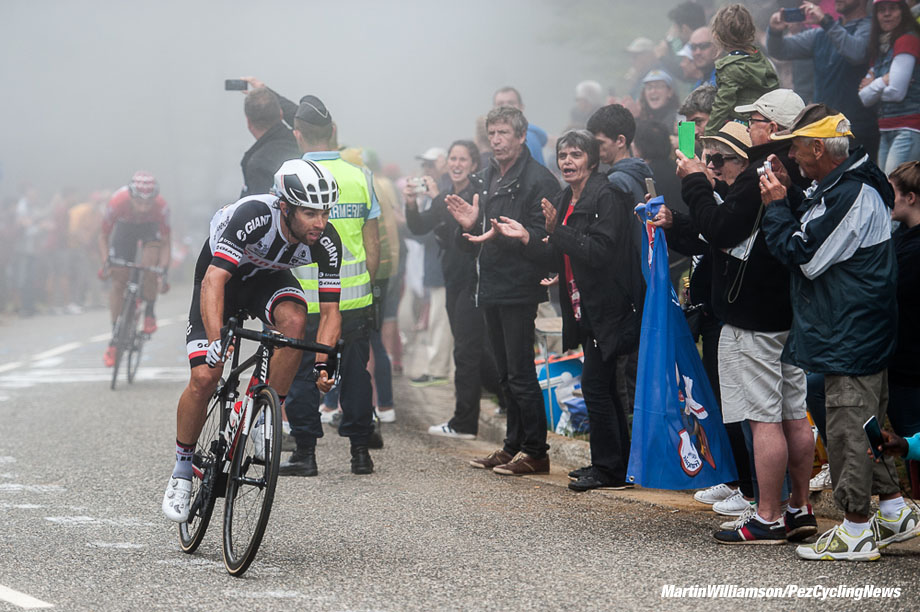 It’s misty up here, not great for photography – and here they come, with Michael Matthews (Sunweb & Australia) first over, saving the points from rivals for team mate and king of the mountains leader, Warren Barguil. 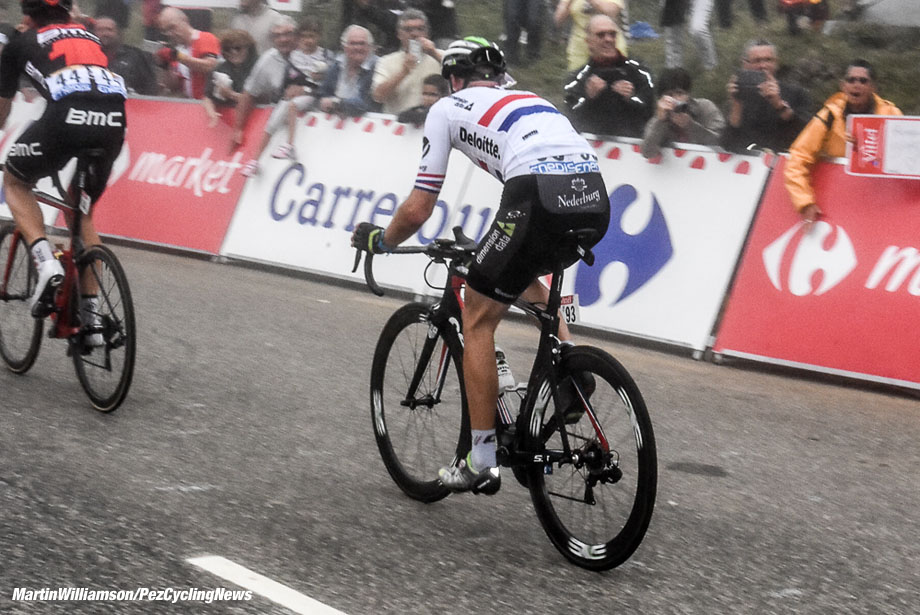 And Steve Cummings in the break; when we were chatting to him the other day he told us that one of ‘his’ stages was coming up. 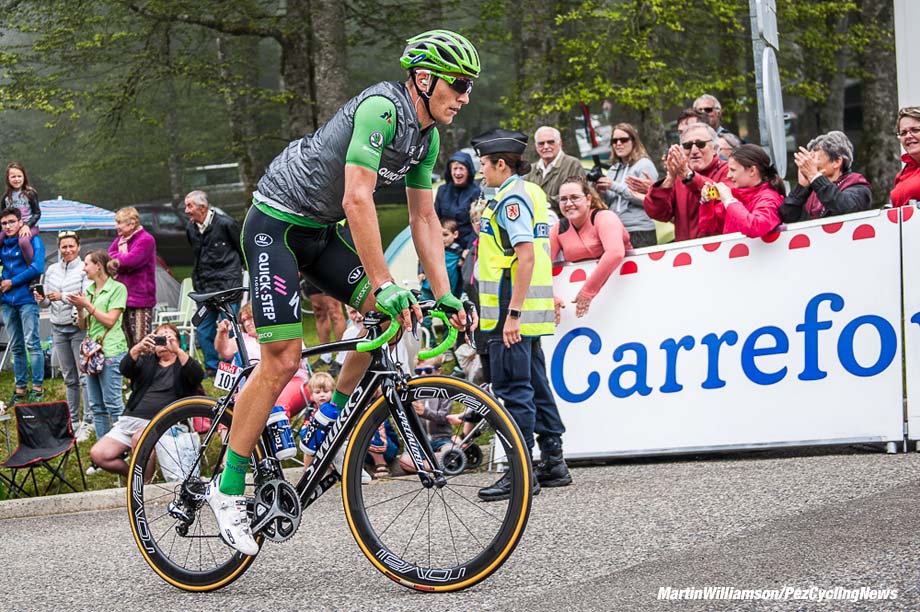 Kittel isn’t so far off the pace at the top – but we have a feeling that may change by the end of the day. 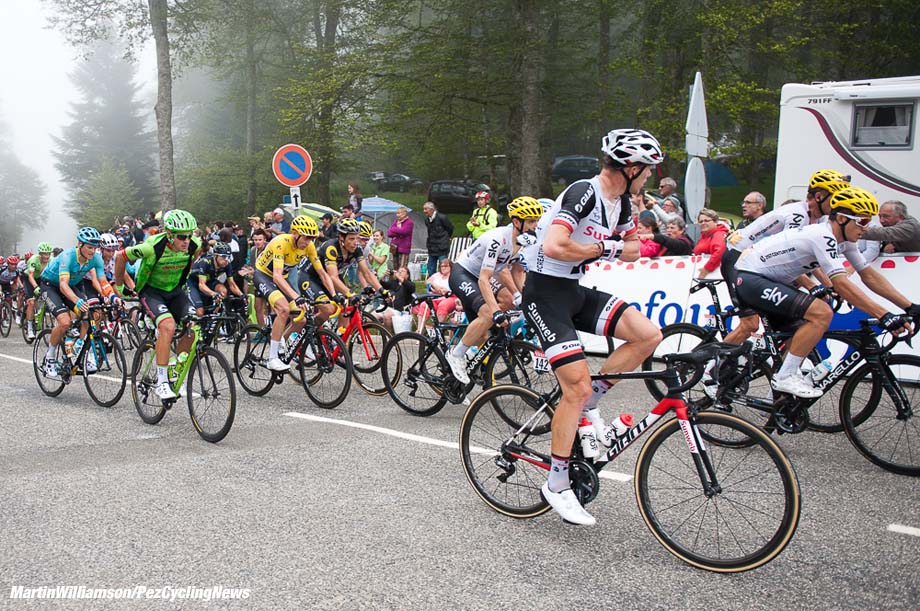 Luke Rowe gives his all over the summit for the Froome Dog, he’ll clock off after this, he’s no mountain goat but Sky still have Landa, Nieve, Kwiatkowski, Kiryienka – just so strong. 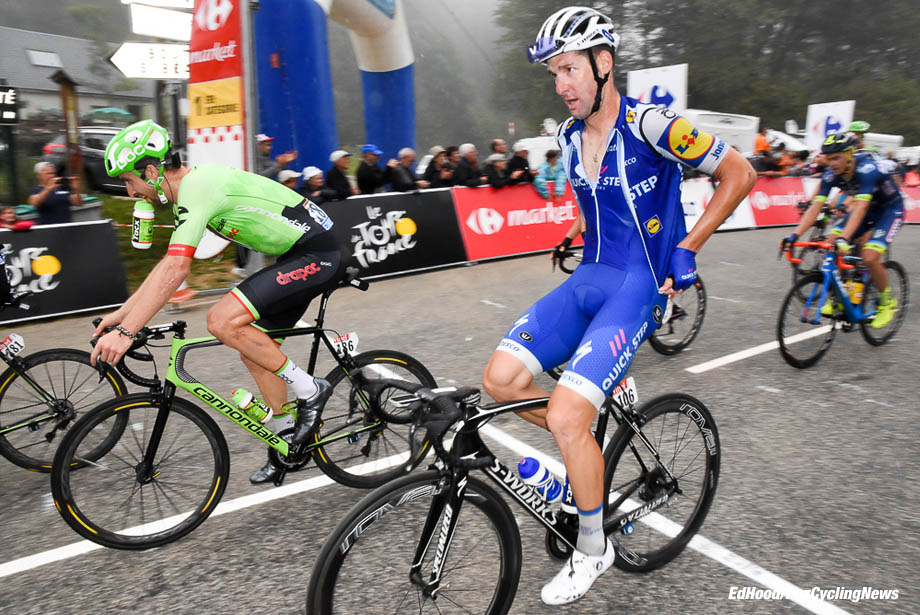 Kittel ‘pilot fish’ Sabatini zips up his gillet, this is isn’t his scene but it’s all part of being a Grand Tour rider. 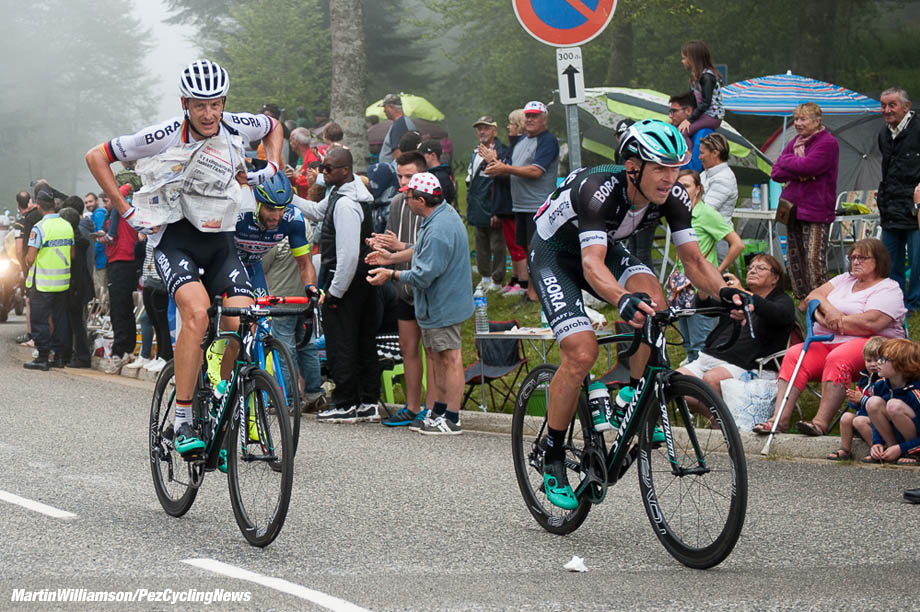 Burghardt is ‘old school’ though – newspapers for up the front of his jersey. 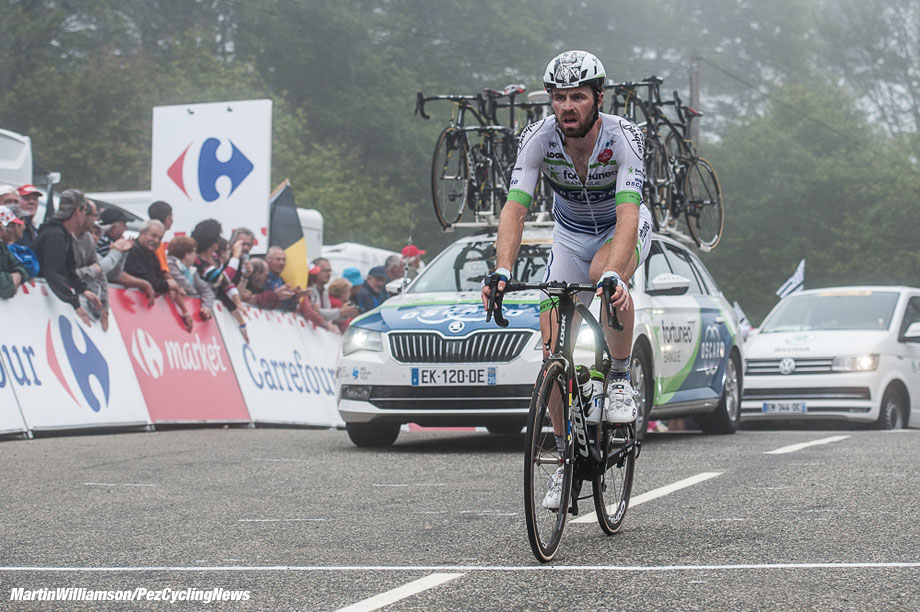 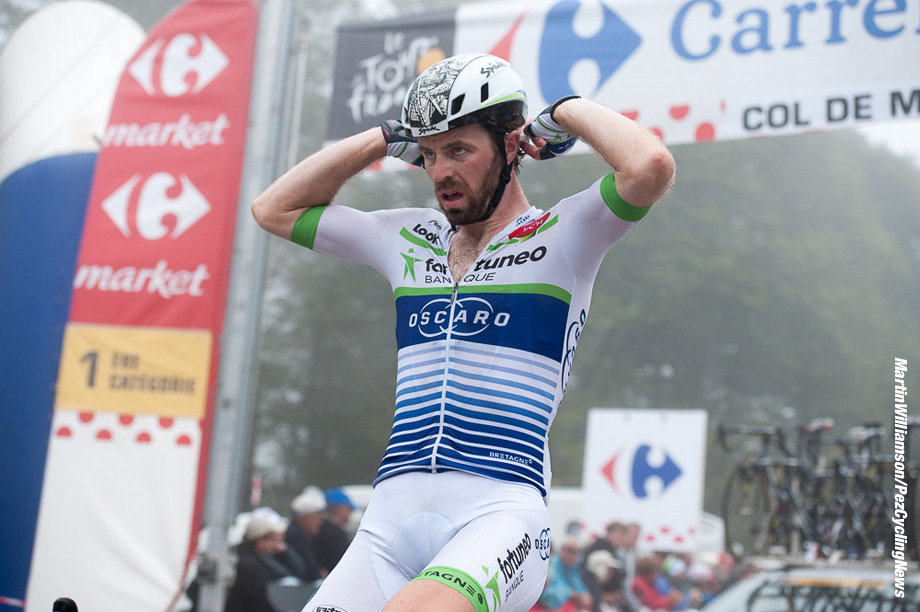 The clock is ticking; there are still two HC climbs to go – we’re worried about that time cut for Dan McLay. . . 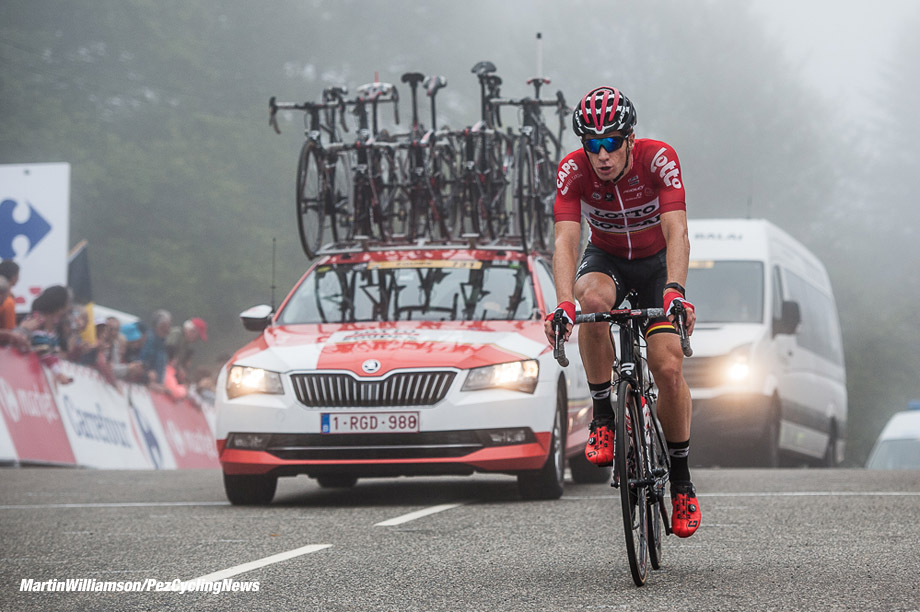 There was a Lotto behind him then just the voiture balait. Jump in the car and GO to beat those civilians. And boy, were we in for a surprise at our hotel. More Pyrenees tomorrow, can those skinny men Bardet and Aru inflict more pain on the wounded Froome Dog?