Race Report: Maciej Bodnar produced the ride of his life to take his first ever Grand Tour stage win. Meanwhile, Froome rode an error free stage to take the overall win and third place on the day as Romain Bardet collapsed but kept his place on the podium. 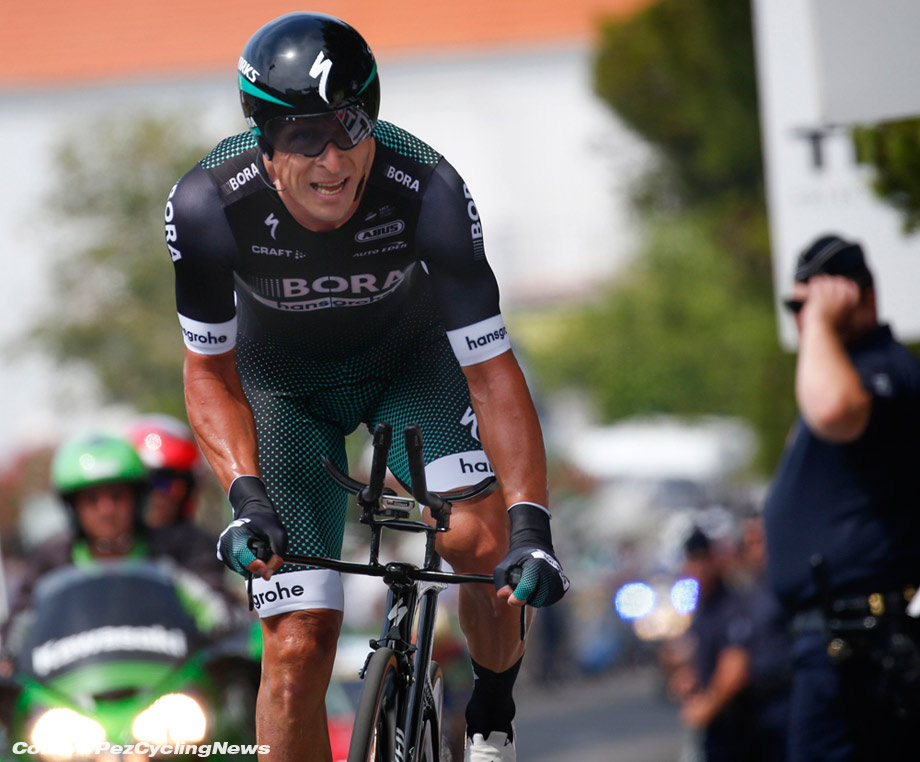 Pole Position
It was a stage of two halves, the first half contained the majority of stage contenders, but it was outsider Maciej Bodnar who set the early time. He kept his place on the hot seat as first Tony Martin then Stefan Kung then Primoz Roglic failed to topple the Polish rider. That meant that Bodnar would take the win, as long as Froome couldn’t snatch the victory at the end. Both Rigoberto Uran and Romain Bardet had a chance to take the overall victory but, although Uran put in a great ride to limit his overall deficit to just one minute, Bardet had a terrible day and ended up losing just under two minutes to Froome, by the end of the day, the real threat was from Mikel Landa who came within a second of stealing the podium place from Bardet. We’d known that this day would come for a few stages, but Froome has now confirmed his fourth Tour de France victory, and third in a row. 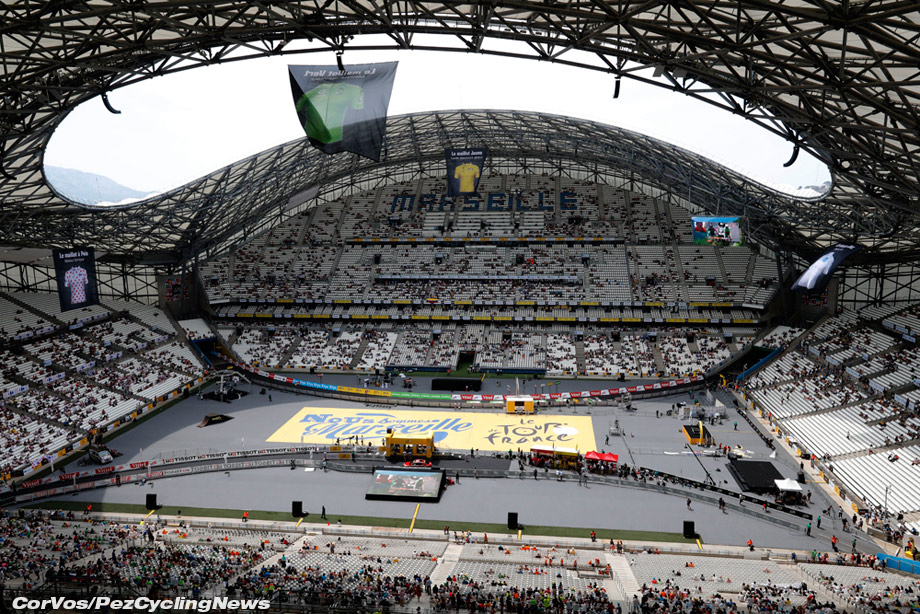 Route
There’s just 126km left of the 2017 Tour de France, it’s pretty clear who will make up the podium – although the exact order is yet to be decided. There’s been just 14km of time trialling so far and that, combined with the relatively sedate mountain stages, has kept the time gaps to a minimum. It’s unlikely that they’re going to open up much on this 23km trip around Marseille. 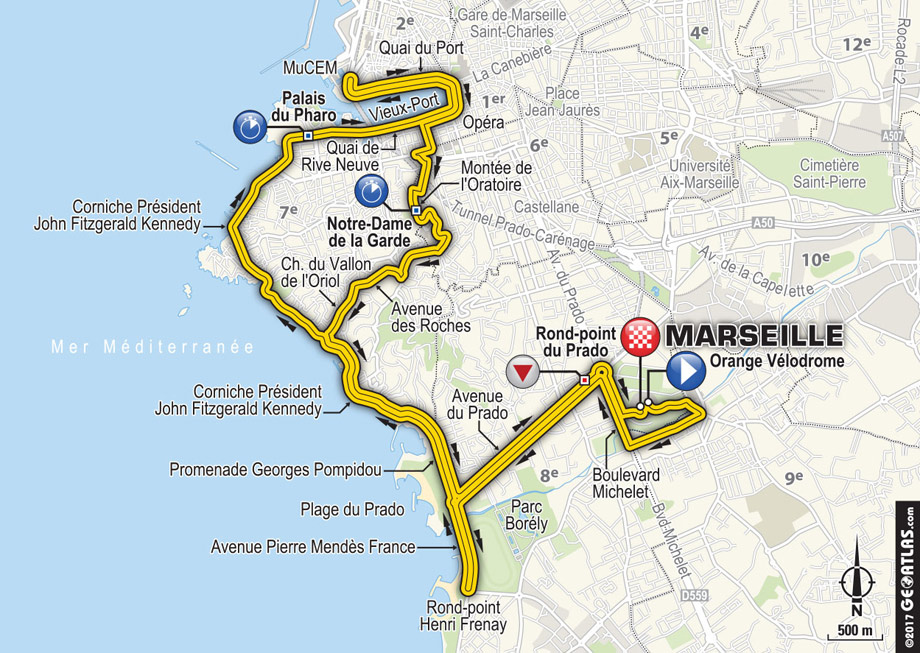 The stage starts and finishes at the Stade Velodrome, the football stadium where Olympique Marseille play, it also hosts rugby union games on occasion. The riders will then head south to the coast and along the seafront to the west of the city. The first part of the course is pan flat and not very technical but the return leg features the 1.2km @ 9.5% rise to Note-Dame de la Garde. The cathedral towers over the city and it will provide a leg breaking distraction from the fast riding which precedes and succeeds it. At the summit, there’s 7km back to the Stade Velodrome and the finish of the penultimate stage. 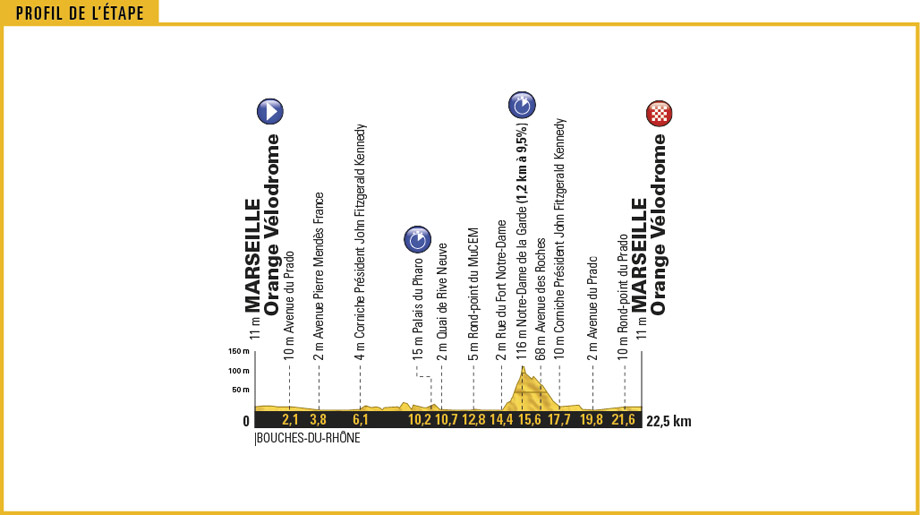 Luke Rowe (Sky) will start off first, he’s pretty secure in his Lantern Rouge victory, he currently trails Thomas Leezer (LottoNL-Jumbo) by seven minutes. At the sharp end, the top ten are virtually guaranteed to remain top ten by the end of the day. The white jersey also looks like it’ll stay in the Yates family, Simon Yates (Orica-Scott) has a 2.06 lead on Louis Meintjes (UAE Team Emirates), so far this season Yates has a 3-1 lead in time trials. 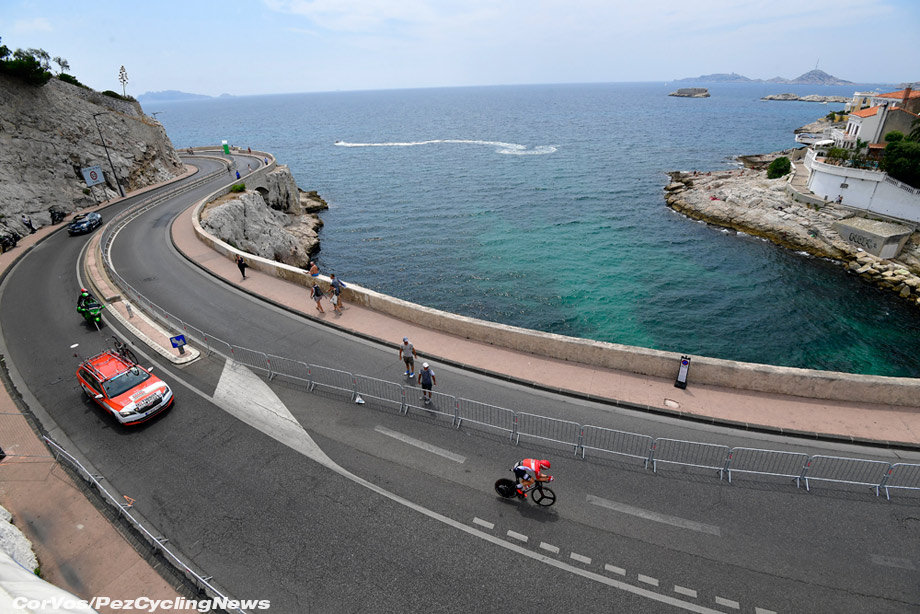 Early Birds
Amongst the earliest starters, Taylor Phinney (Cannondale-Drapac) had the best time trialling heritage and the set the fastest time 29.21 to hop onto the hot seat. Just as the American was getting comfortable, he was pushed off the seat by Maciej Bodnar (Bora-Hansgrohe) who had flown around the course to whip an entire minute off the fastest time to finish in a time of 28.15. Bodnar had fended off some pretty tough time triallers but his biggest early battle was against Tony Martin (Katusha). A lot was resting on Martin’s shoulders, the German had finished fourth in the opening time trial and team mate Alexander Kristoff had fluffed his lines during the sprints. The German was flat out, but he wasn’t going to beat the Polish leader and he settled for second, 15 seconds in arrears. With that one result, Bodnar was now a serious contender for this stage.

Bodnar had little time to relax as Stefan Kung (BMC) was the next contender to hit the start ramp. The Swiss rider had come second on the opening stage, just five seconds behind Geraint Thomas (Sky). Of course, Thomas had gone home since then, but Kung had but 28 seconds into Bodnar on a much shorter course at the start of the race. Michal Kwiatkowksi (Sky) was also on the course, the Pole had been superb in the final week for Froome and he was providing some additional help to his leader. The yellow jersey was doing some extra recon of the course by following Kwiatkowski in the team car.

Kung may have taken 28 seconds off Bodnar on the opening time trial but he finished up 34 seconds off the Pole in the final time trial. That was just good enough for fourth place, one spot behind Nikias Arndt (Sunweb) who was in second again after his silver finish yesterday.

It was Polish domination at the moment though, Bodnar was sitting pretty at the top and, at the moment, it was only compatriot Michal Kwiatkowski who was getting close. The Pole went six seconds quicker than his countryman at the first checkpoint. Kwiatkowski’s lead was cut to just a solitary second at the next checkpoint, which was placed at the summit of the climb. There was just 7km left to the finish but during that time the deficit was flipped and Kwiatkowski finished a single second behind Bodnar at the finish. Yet another rival sidestepped for Bodnar and Bora-Hansgrohe. 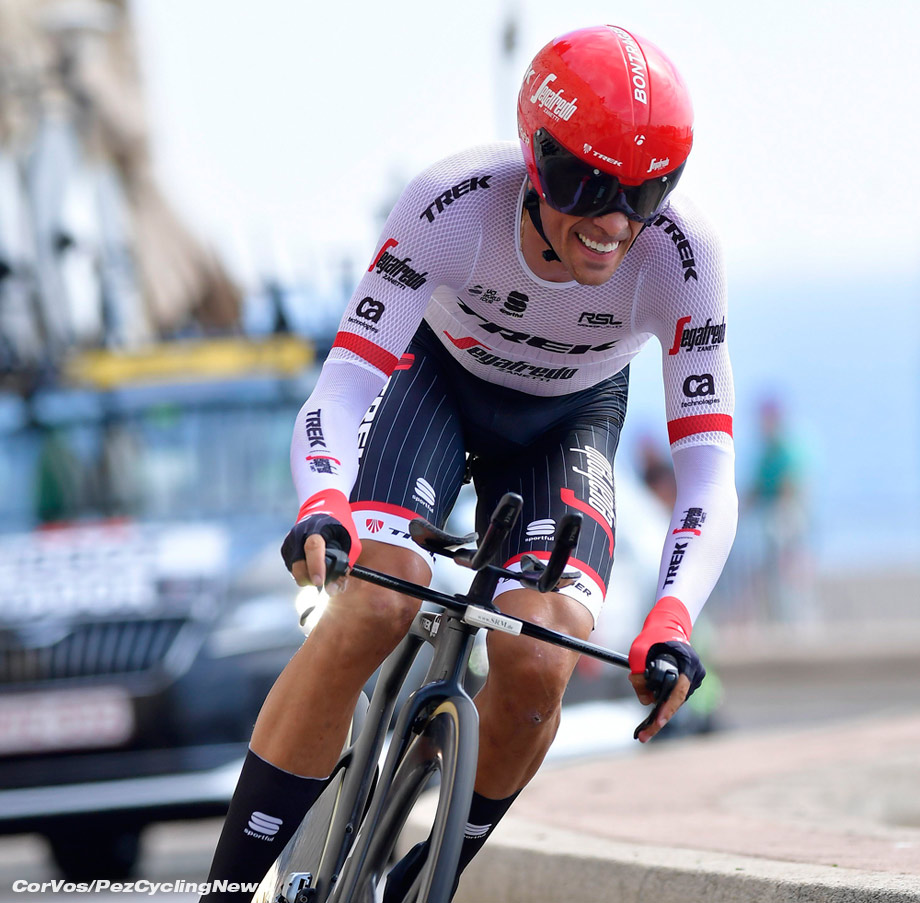 Unbeatable Bodnar
As Daryl Impey (Orica-Scott) set the fourth fastest time, twenty seconds slower than the leader, it announced that we were into the final fifty riders. That also brought us to Primoz Roglic (LottoNL-Jumbo), arguably the favourite for the day. The Slovenian had suffered an unfortunate crash in the opening stage and there wasn’t to be much more luck for him here, he had to take a bike change prior to the climb but he was flying now on the flat finale. Despite catching his minute man, and coming close to catching a couple more, Roglic had fallen too far behind due to the mechanical and he had to settle for tenth place at the finish. 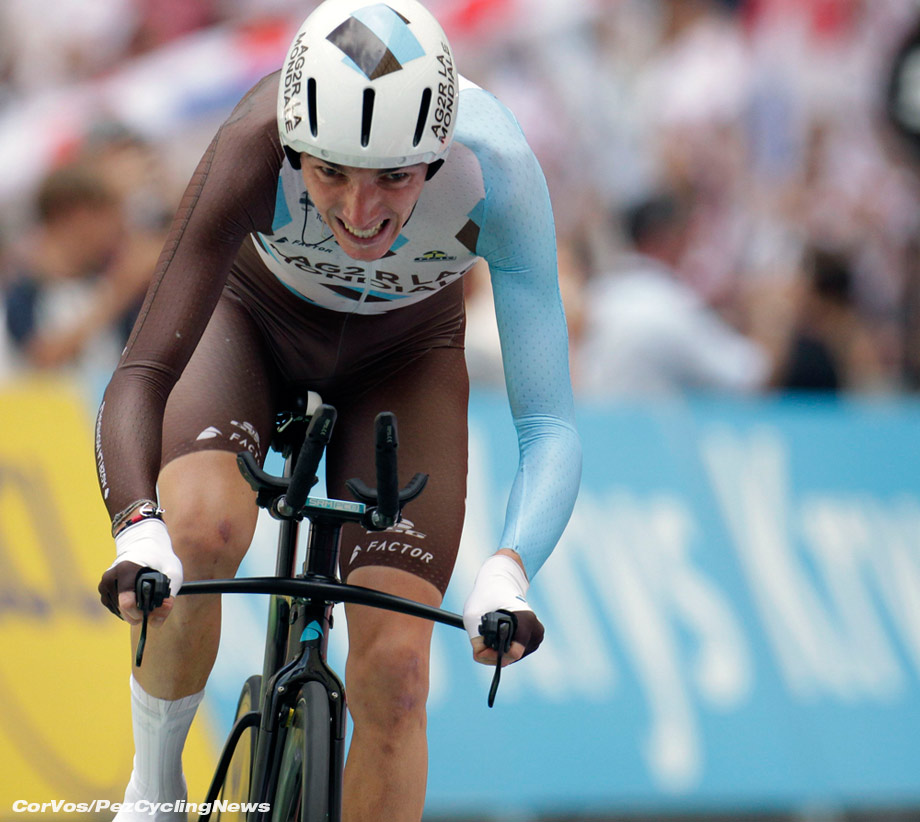 Roman Bardet struggled and saw his 2nd place downgraded to 3rd on gc.

Sylvain Chavanel (Direct Energie) was in 25th place overall, the first position to be an hour back on GC, and he was turning it on out on the course. The French veteran was in 6th place over the climb and was now on the descent and flat finale. Chavanel kept the pace going and it was good enough for a provisional seventh place as he crossed the line in the stadium. For Bodnar, his attentions turned to Chris Froome (Sky). The yellow jersey was really the only realistic chance left to unseat Bodnar at the finish. The Pole had waited for 109 riders to cross the finish line and he now had just the top ten on GC to go.

The Final Ten
Both Simon Yates (Orica-Scott) and Louis Meintjes (UAE Team Emirates) were down the ramp, there was a possible battle for the white jersey. Yates would’ve needed to have a shocker, but for such a small distance the time gaps were pretty hefty. 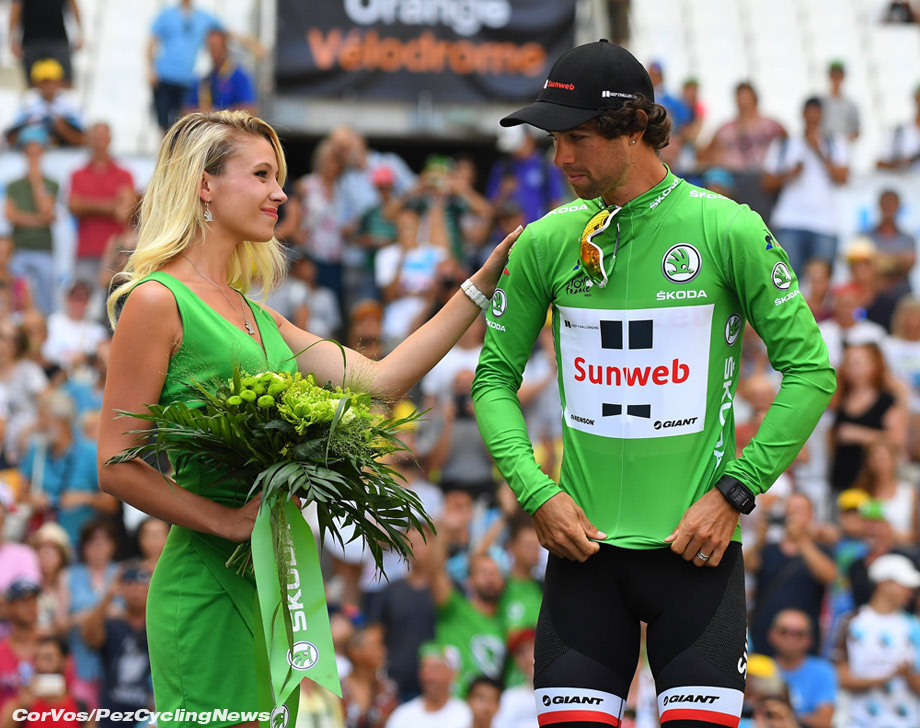 Both Rigoberto Uran (Cannondale-Drapac) and Romain Bardet (AG2R) were on the road, their chances of unseating Froome were probably dependent on a mechanical from Froome – but he had suffered a few during the race and so there was some hope for the rivals. Meanwhile, further along the course, Alberto Contador (Trek-Segafredo) was absolutely flying in his likely final ever Tour de France time trial. He hit the second checkpoint just one second down on Kwiatkowski’s time.

We were still waiting for the time checks for the top four riders overall, but Mikel Landa (Sky) would be the first to reach that point. The Sky man was holding off Fabio Aru (Astana) who was just 19 seconds behind him on GC.

Contador had started very strongly but he had faded in the finale and lost 22 seconds to Bodnar on the run in to finish. Meanwhile Aru was 51 seconds slower than Kwiatkowski at the summit of the climb. That time check came through at almost exactly the same time as we saw that Froome was the second fastest at the first time check, ahead of Bodnar. Bardet was not on a good day, he had already lost his second place to Uran provisionally and it was looking to get worse as Uran hit the second time check with a very respectable deficit of just 21 seconds to Kwiatkowski. That looked superb when compared to Bardet who was in a world of pain and was 1.17 down on Kwiatkowski, he was at risk of losing out on the podium all together with Landa having a good day. Bardet was 45 seconds down, losing another 28 seconds and Bardet would be gone. 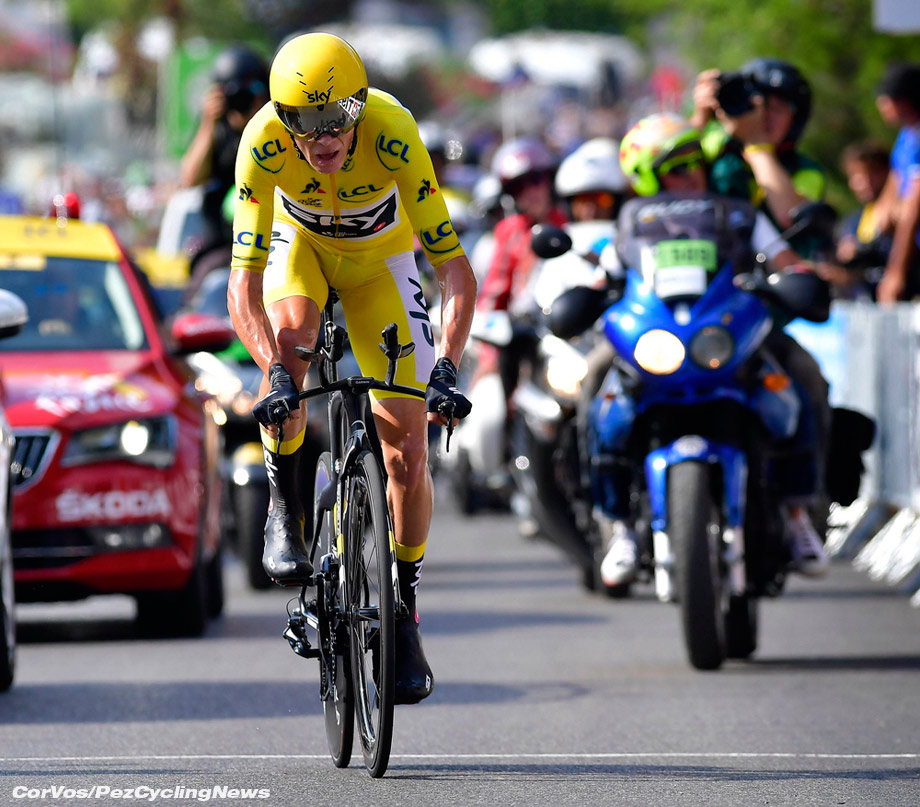 Froome was metronomically cruising around the course and he was just three seconds down on Kwiatkowski at the second checkpoint. The yellow jersey was in the bag but he hadn’t won a stage this year and was on the rampage. Landa was 51 seconds down at the finish, Bardet would need to lose more than two minutes to fall out of the podium spot, that was looking less likely to happen but he had definitely lost his second place, Uran had produced a great performance to lose just 31 seconds, he would finish within a minute of Froome now and it would be his best ever Tour de France performance. 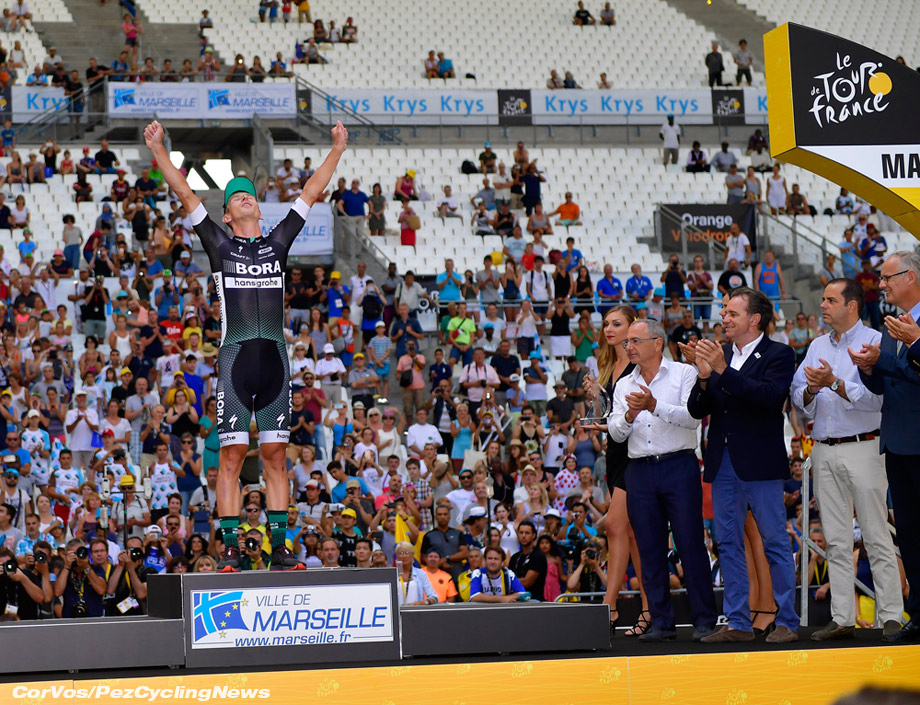 Bardet was within Froome’s sights as they both made it into the final kilometre. Bardet stayed in the lead but he was two minutes down on Bodnar. Froome crossed very shortly afterwards, not enough to secure the stage victory but more than enough to take overall. Bardet’s collapse brought Landa right back into contention but the Frenchman kept his spot on the podium by a single second.