Race Report: Arnaud Démare powers in hectic final kilometer in Vittel with Cavendish and Thomas both involved in separate crashes. After a long break by Guillaume van Keirsbulck, there was only one outcome, but crashes split the field in last meters. 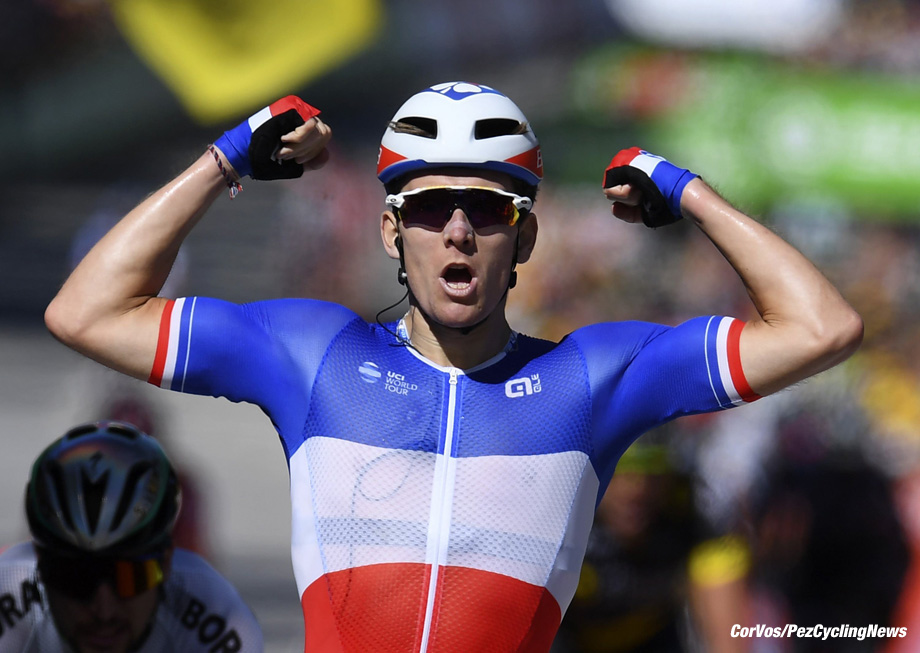 Today gave the term ‘transition-stage’ a whole new meaning. With an uphill finish yesterday and tomorrow it was always going to be the sprinters who contested the stage. It was an uninteresting spectacle for spectators and commentators alike for much of the afternoon, that is until the fast-men started to rub shoulders!

The 207km route only had one categorised climb which came with 40km to the line so that jersey stayed safely on the shoulders of American Nate Brown (Cannondale-Drapac). 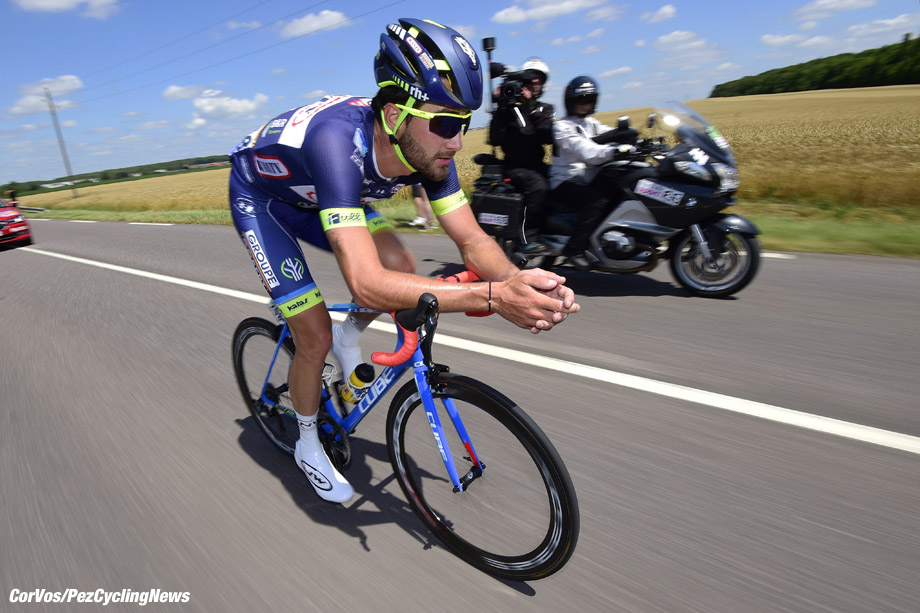 There is Always One
After yesterday’s hard-fought stage it was no surprise that today’s action began at a more pedestrian pace. The move of the day went from the gun when 26 year-old Belgian Guillaume van Keirsbulck (Wanty-Groupe Gobert) launched himself from the peloton. He quickly built up a minute lead as the group behind chatted and soft-pedalled through the opening section. 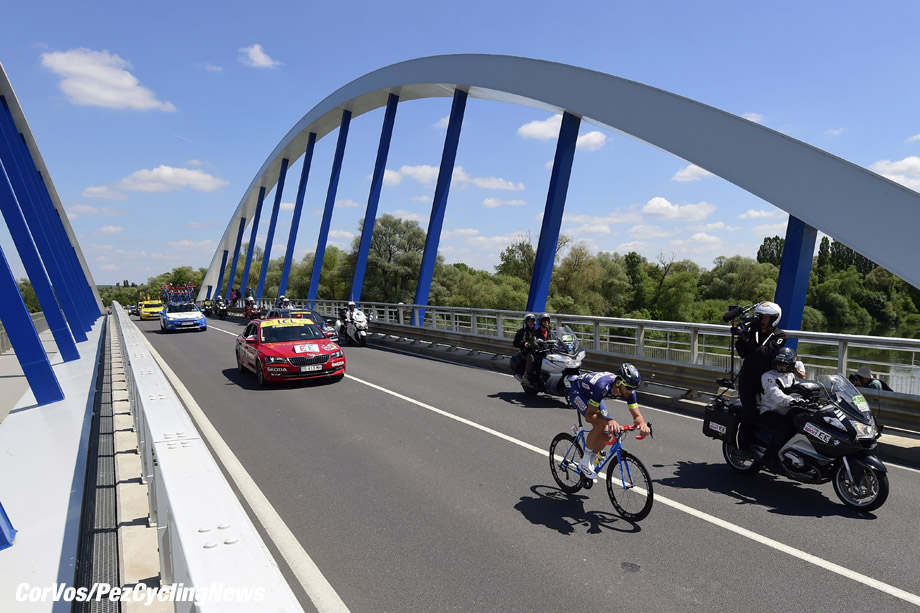 An initial look of amazement was apparent on the face of Van Keirsbulck as he shook his head to the cameras with a wry smile. This was going to be a very long day for him as the lone leader and he was very aware of it. 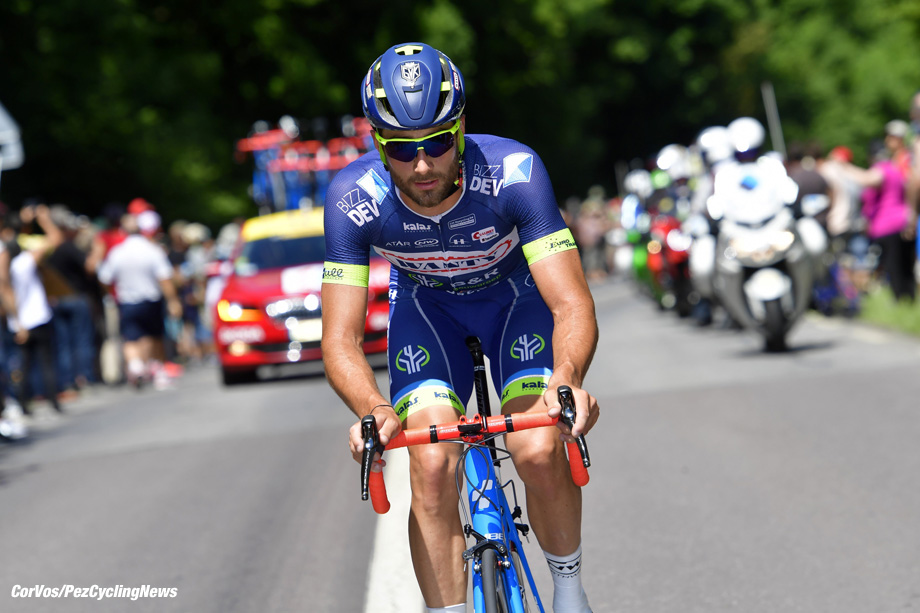 Not keen to waste energy he tucked into an aerodynamic position which he held for over four hours as he powered along. Though the escapee managed to build a maximum gap of 13 minutes, fatigue took its toll and he eventually succumbed to his fate, being reeled in with 15km to the line. 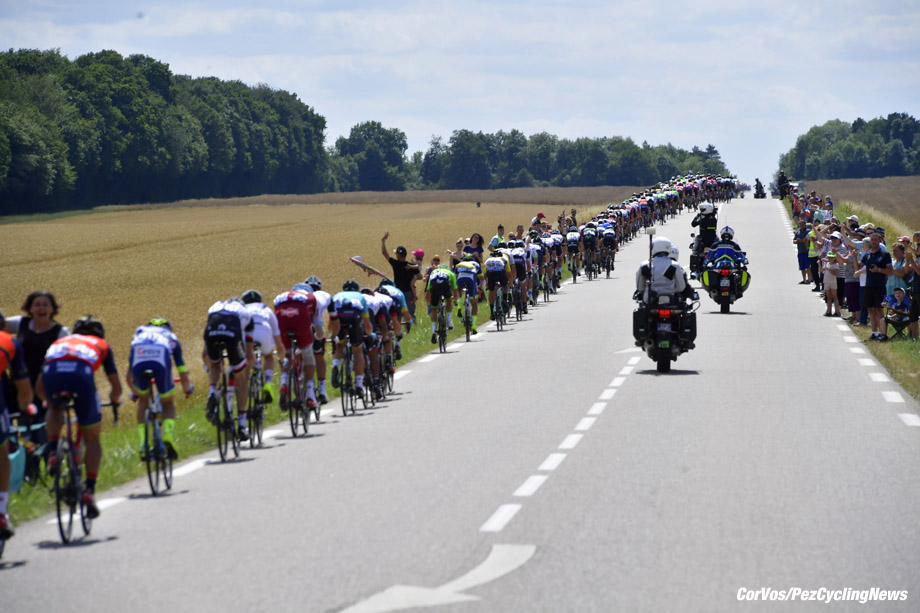 Drama in Vittel
As the race entered the closing stages, Sky were present at the front keeping race leader Geraint Thomas out of trouble. World time-trial champion Tony Martin then took the reins at the 4km point pushing the pace up to 60kmph to set-up the Katusha-Alpecin sprinter Alexander Kristoff. 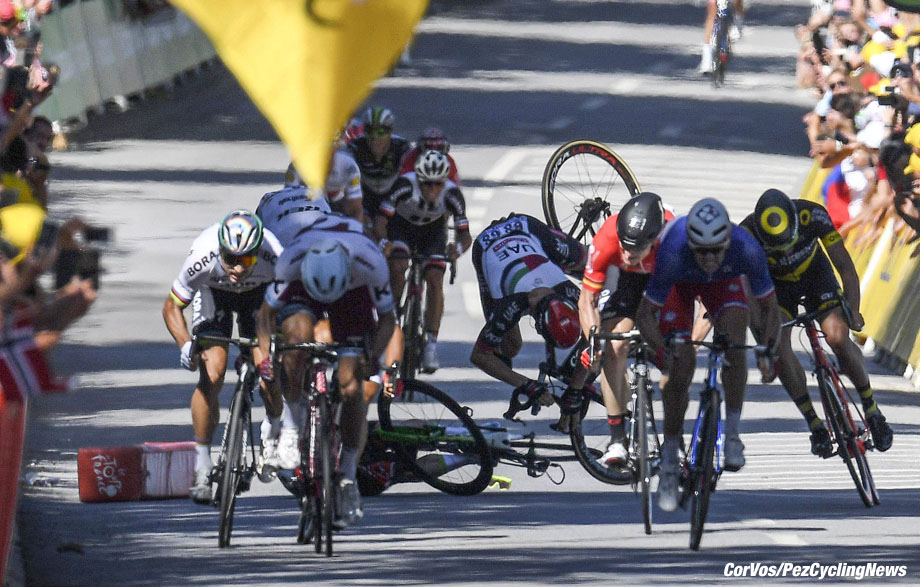 Dimension Data had the perfect lead-out for Cavendish with Renshaw and Boasson Hagen controlling the race from 2km to the line. This hard work was to be undone however as the race reached its climax. There was a tumble just before the flamme rouge involving several riders including Geraint Thomas, though he got off lightly with only a few bumps and bruises. 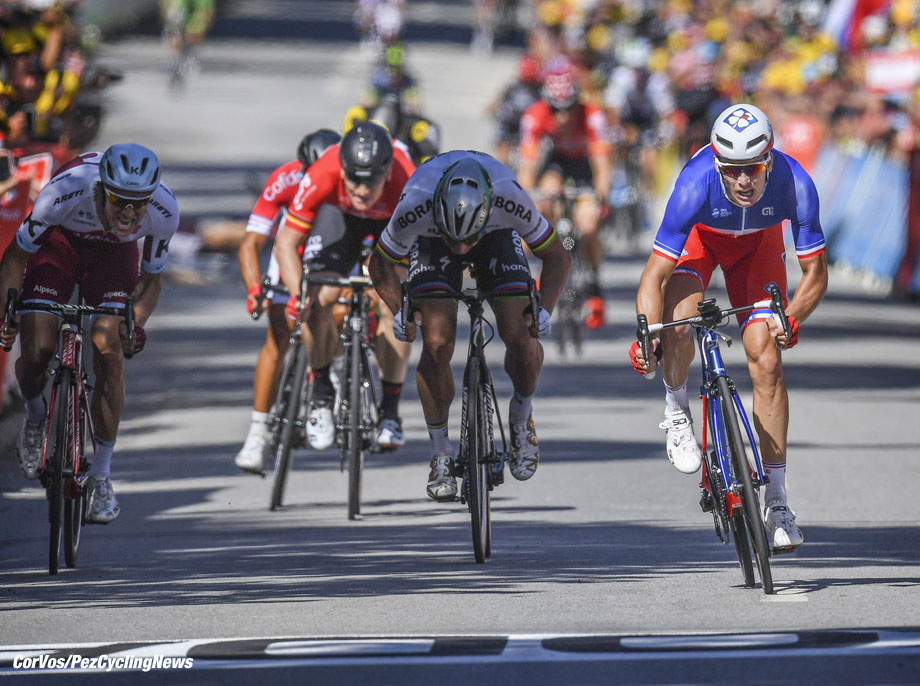 Just moments later disaster struck in the final 200m when Peter Sagan (Bora-Hansgrohe) drifted into Cavendish’s path forcing him into the barrier, also taking down John Degenkolb (Trek-Segafredo). Cavendish came down hard on his right shoulder and it is questionable whether or not he will start tomorrows 160km stage from Vittel – La Planche des Belles Filles. 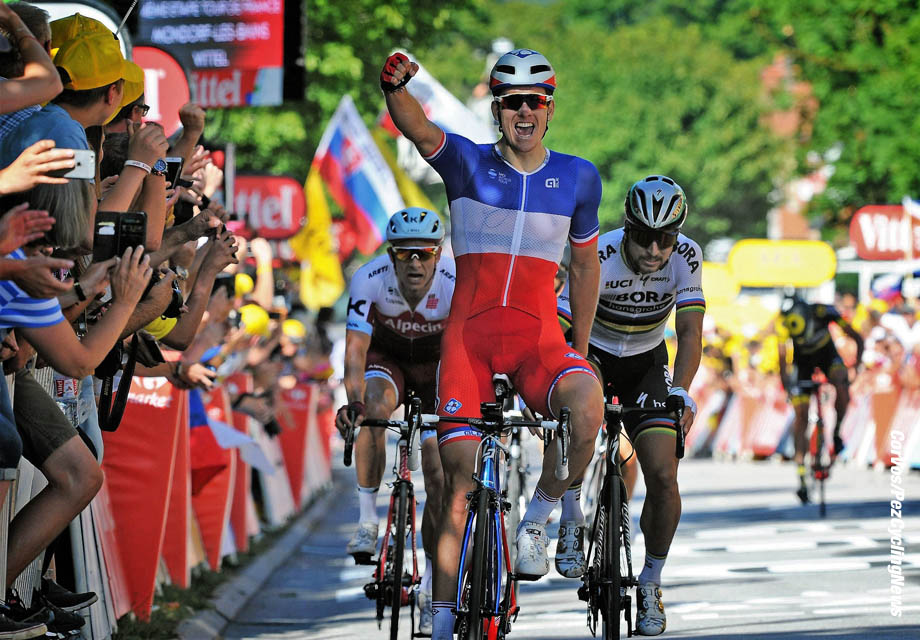 FDJ’s French National champion was ahead of the carnage and was unaffected and probably unaware of what was going on behind him as he crossed the line for his first Tour de France stage win. He also took the green points jersey from Marcel Kittel (Quick-Step Floors), who finished 13th after being delayed by the first crash.

After a close look at video of the finish, the race jury decided that World champion, Peter Sagan had caused the crash by sticking his elbow out as Cavendish was on his inside. Sagan went to the Dimension Data team bus immediately after the finish to apologize, but the Rainbow jersey will not be on the start line in Vittel on Wednesday. 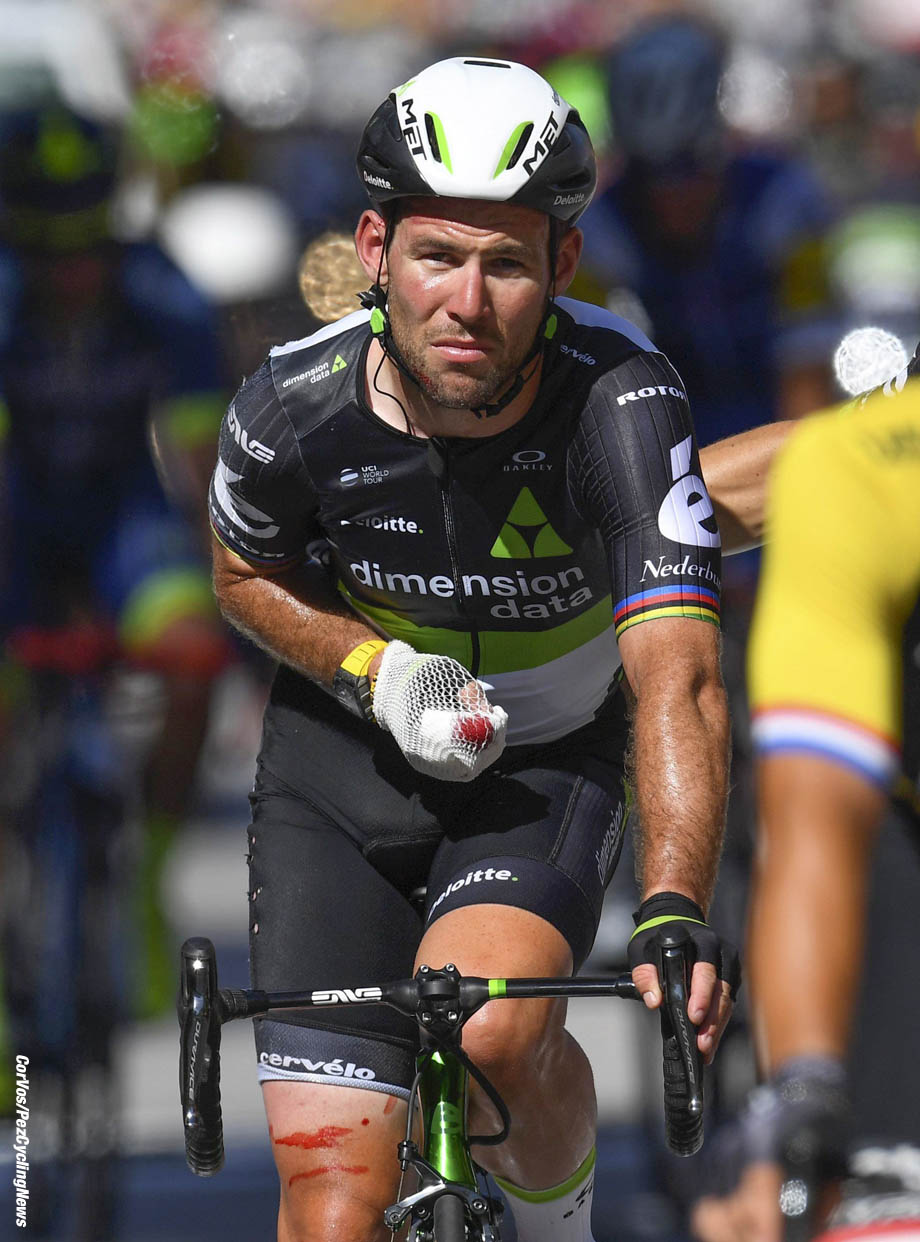 Wednesday’s summit finish of stage 5 on the La Planche Des Belles Filles should see a change in the overall positions – Keep it PEZ!

2017 Bont Vaypor+ Shoe Review: Roo and Moo For You