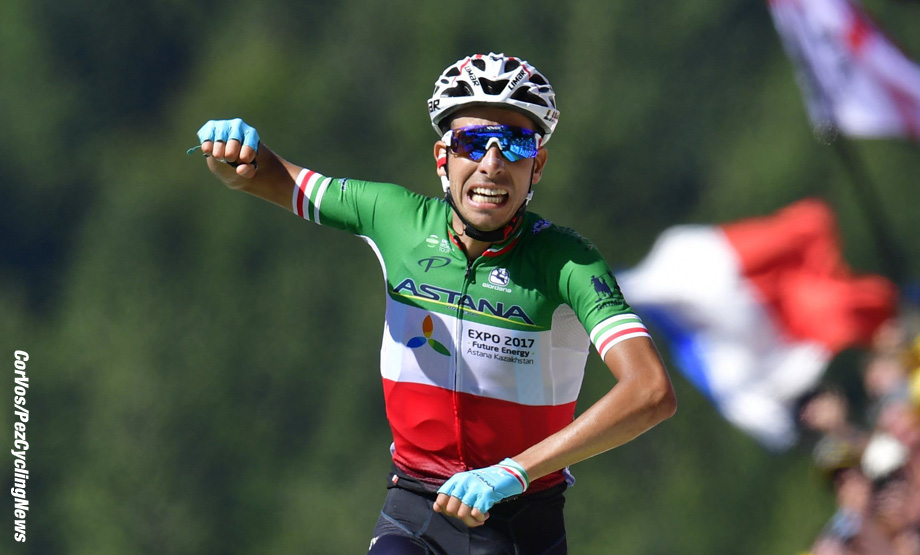 It has been 25 years since a Cat -1 climb has appeared this early in the Tour de France and three years since the Planche des Belles Filles appeared at all (where the Pez himself was roadside for an action-packed day). On that occasion in 2014 it was then Italian national champion Vincenzo Nibali who proved victorious. Thus it seemed fitting that another Italian champion Fabio Aru should repeat that performance in the same colors of Astana. 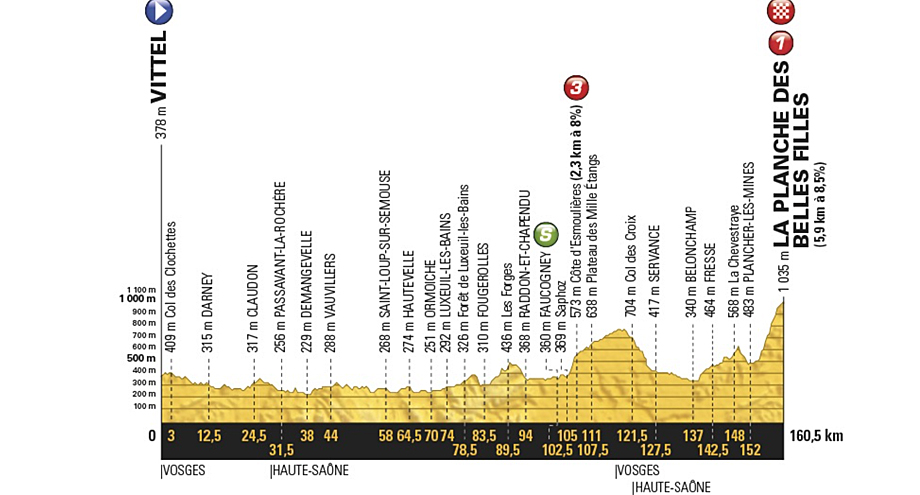 The race rolled out of Vittel without two of the best riders in the world – Mark Cavendish due to a shoulder injury and Peter Sagan due to disqualification. Yesterday’s drama was soon forgotten however as an action packed stage unfolded. 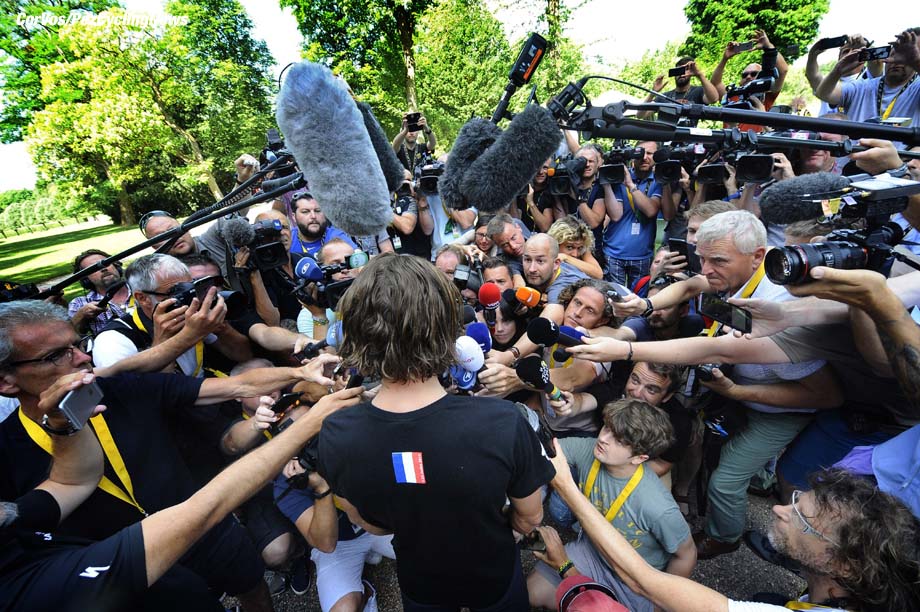 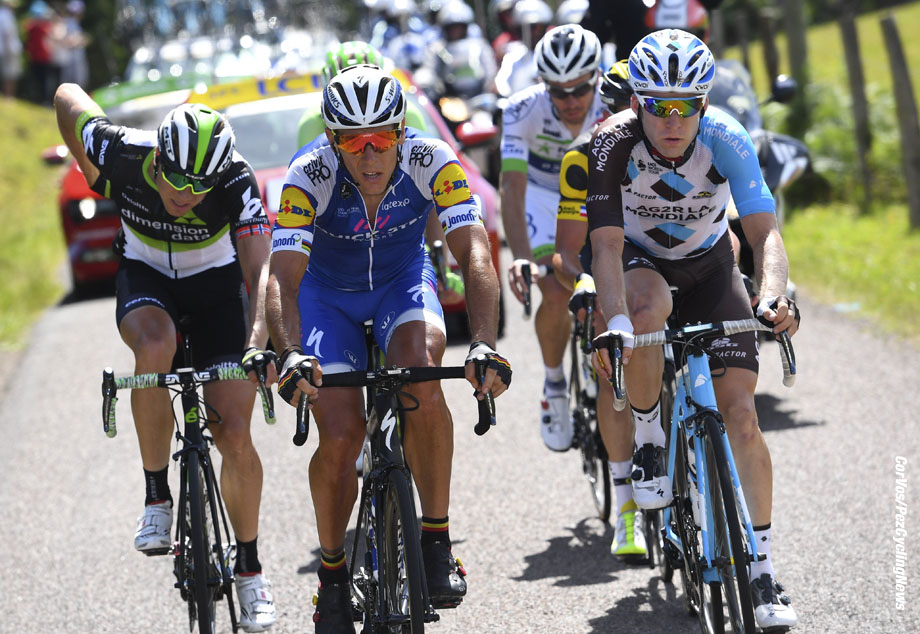 Back in the peloton Geraint Thomas pulled in for a toilet break, giving the break even further leeway. Looking at the calibre of riders in the breakaway and the relaxed pace in the peloton it became clear early on that without a quick reaction that this move would go the distance. 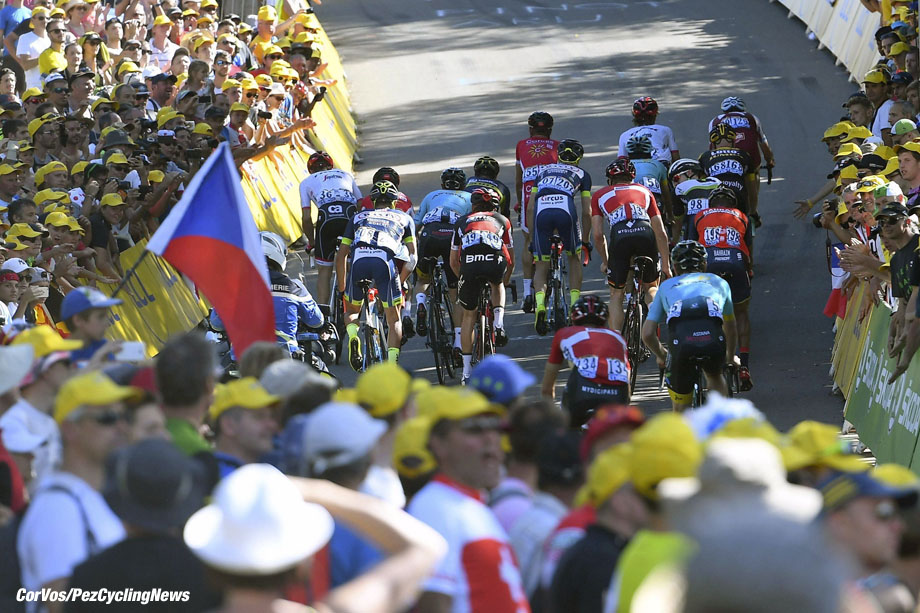 BMC realized the danger and quickly got to work to peg the move back. As the gap peaked at 3:30 the work of Richie Porte’s men slowly chipped away at the advantage with little cooperation from the other squads. With 8 riders in the breakaway and 9 Tour de France stage victories between them it was clear that this breakaway had serious firepower. Edvald Boasson-Hagen held the virtual lead on the road, the Norwegian just 16 seconds off the yellow jersey of Thomas. When the break reached the intermediate sprint at 58km to ride the gap held steady a two minutes as BMC continued on the front. 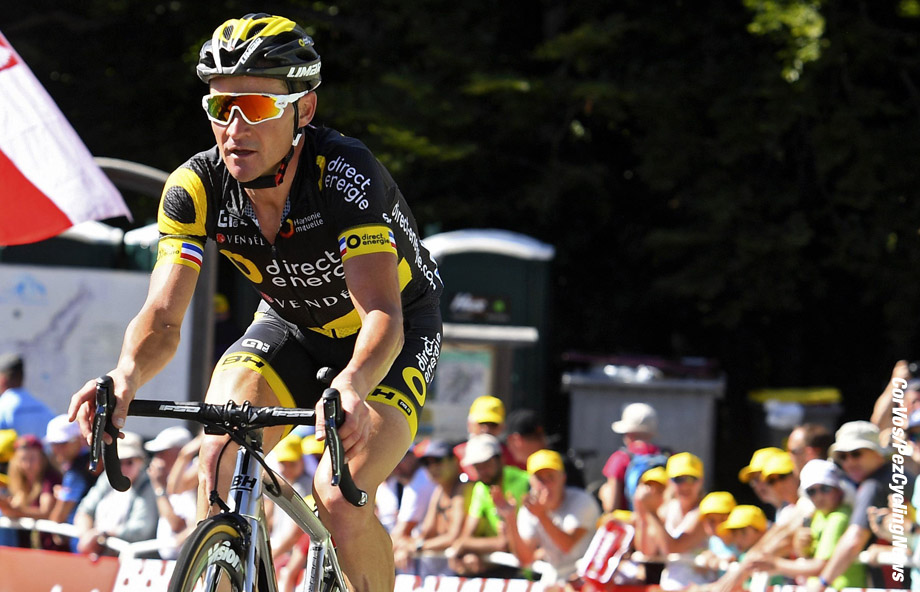 Now in his final Tour de France, Thomas Voeckler was present at the front with his aggressive riding and eccentric personality in full-flight. He looked determined as ever as the race came into the closing 30km, throwing water over his head and shaking his head in his trademark style. 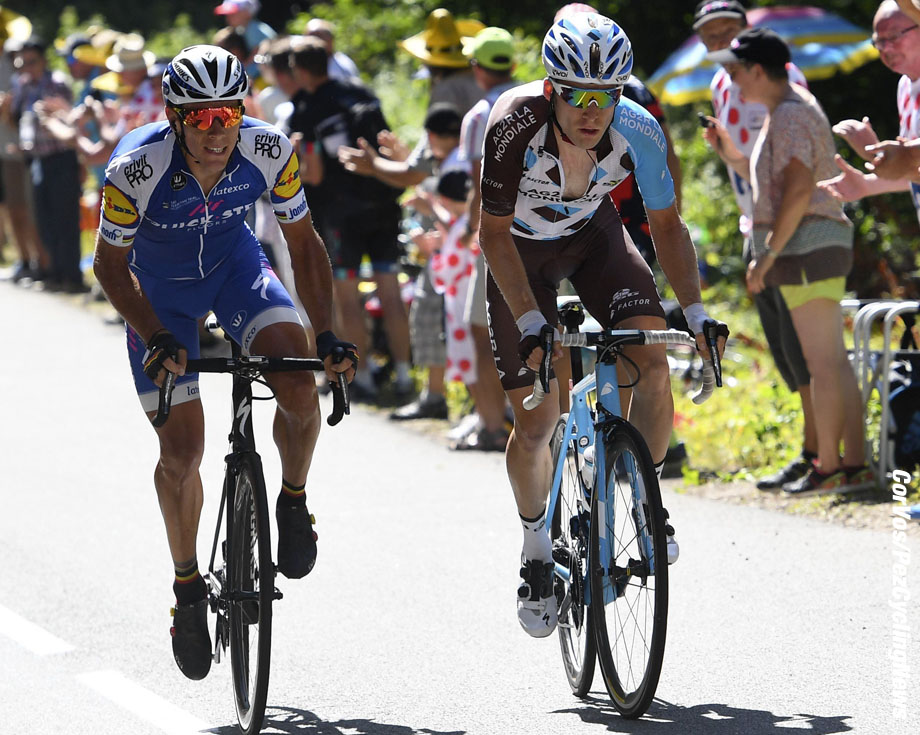 The race exploded with 13km to go with a strong solo attack from Philippe Gilbert who was keen to push on the pace in the breakaway. He was quickly joined by Jan Bakelants and the two battled on towards the base of the Cat.1 finish of La Planche des Belles Filles. 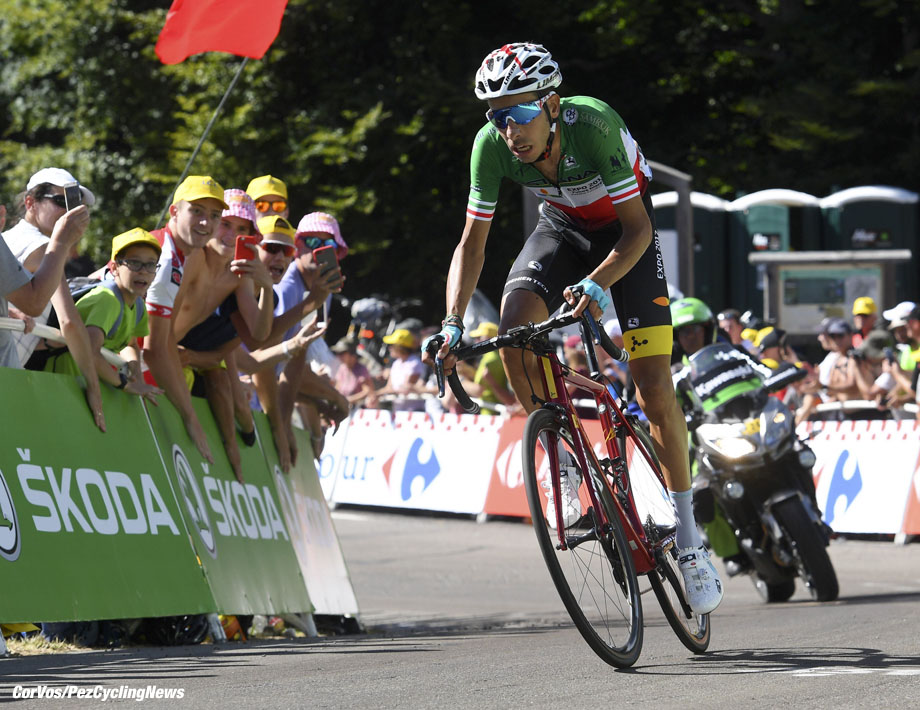 The peloton exploded at the bottom of the climb with a heavy day of riding causing riders to go backwards 5.5km from the line. Among these riders was Thibaut Pinot who was clearly paying for his efforts in the Giro D’italia in May. Sky were displaying their strength in depth with Kwiaktowski leading the Sky train as they swept up Gilbert and Bakelants with 4km to ride. 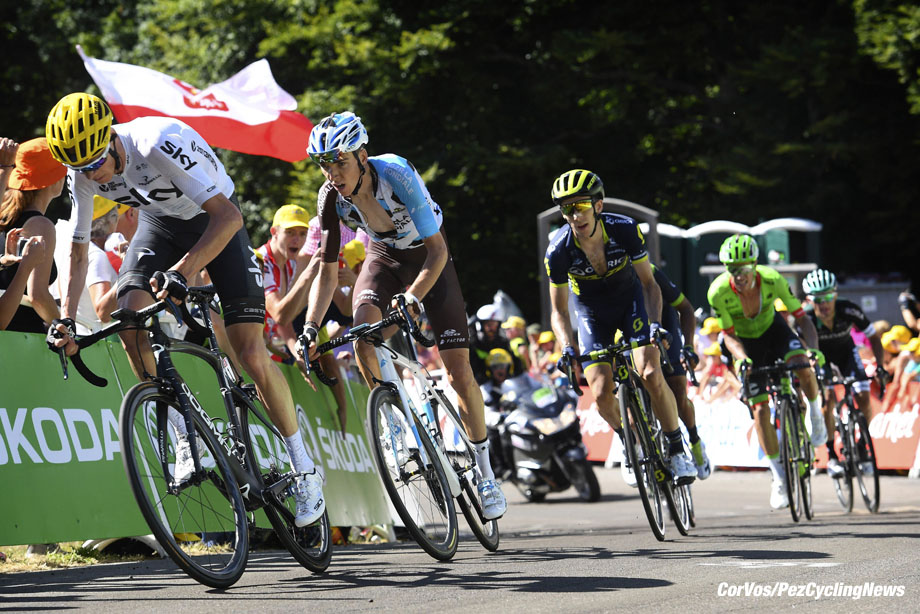 Aru went on the attack 2.5km from the line as Sky whittled down the group to about 15 of the favorites. As Aru pulled out the lead Froome pulled the pin and attacked putting some major names into the red including Quintana and Contador. It was too late – at this stage Fabio Aru was already flying home to his first stage victory and laying down his intent to win the Tour de France outright when it reaches Paris. 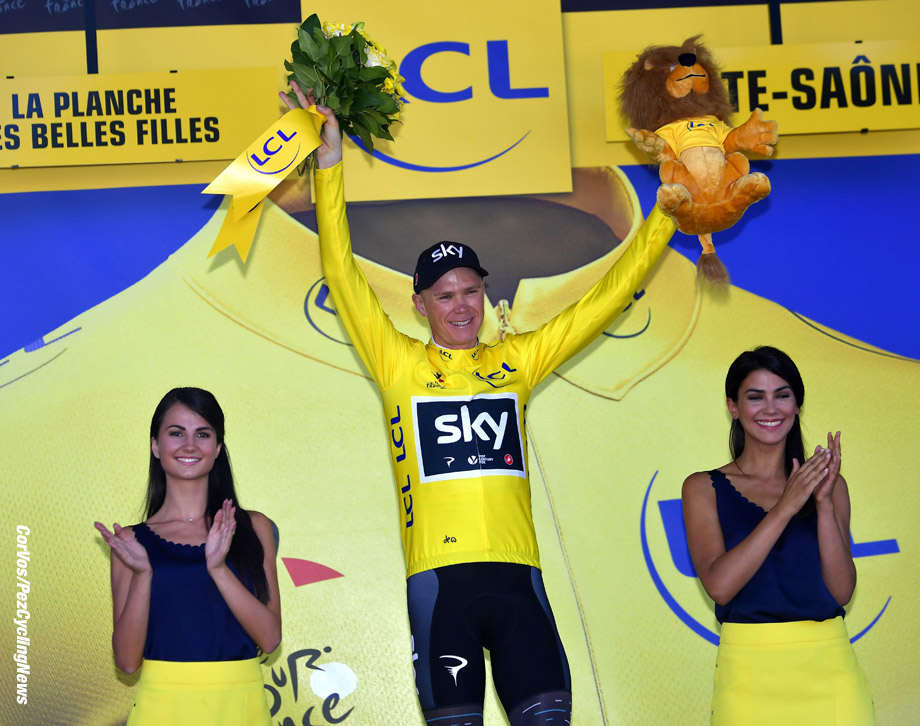 2017 Bont Vaypor+ Shoe Review: Roo and Moo For You