This was the first year the sport of cyclocross allowed its World Championships to be held outside of Europe, and it somehow ended up along the banks of the Ohio River in Louisville Kentucky. Would having the venue here in the USA give an advantage to Team America? The Americans were hopeful but the Euros let them know they still had a few things to learn about racing cross. 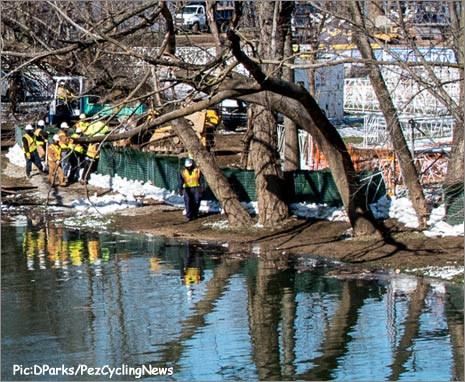 It’s the Friday morning before the Cyclocross World Championships and I’m excited to be heading to Louisville for a weekend of racing. I turn on my phone as the plane comes to rest at the gate and the first thing I see in the twitter headline is “Cyclocross World Championships canceled”! Apparently they’ve encountered an abundance of rain as of late and building the race venue near the river has put the course at risk of flooding. My mind is put at ease as another tweet reveals the new plan of running all four races on Saturday. After that thought sinks in I realize it’s going to be a long hard day for everyone, and I can’t wait for it to get started. 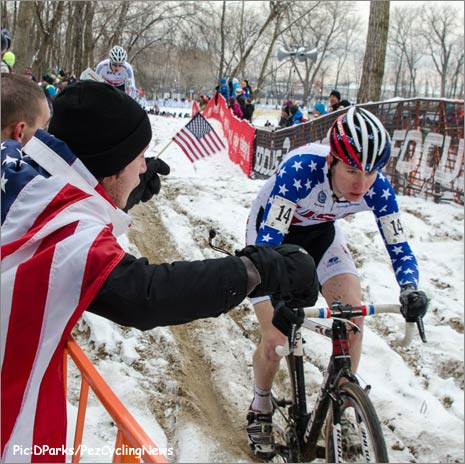 The compressed one day race schedule had the Juniors going off at 9:45. This earlier start time meant the riders would be starting to race with temperatures in the low twenties. An early morning snowstorm had left an inch of snow on the course adding to the extreme conditions. One of the potential medalists for team USA was 16 year old Logan Owen. Owen had dominated the Juniors’ cross scene in the States by winning eight consecutive national championships. I wanted to capture a patriotic image of Logan on his way to a potential world champion medal. A fan with an American flag draped across his back perfectly fit the bill. Unfortunately for Logan, he just missed out on the podium finishing in 4th place. Mathieu Van Der Pol of the Netherlands had been dominating the European cross scene and continued that in Louisville taking the win by a large margin. 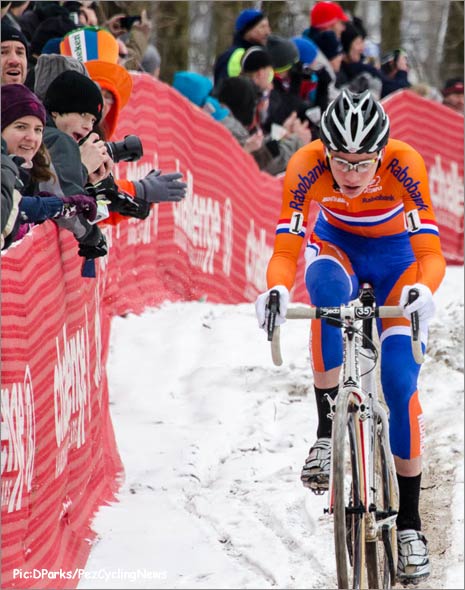 The women were up next and the temps were starting to climb above freezing. Snow and Ice were beginning to give way to what would eventually be puddles and mud. Could this be the year that American Katey Compton finally gets a gold medal? Everything would have to fall into place for Katey with the winningest cyclist in modern times, Marianne Vos, in the race. Vos took an early lead and the gold medal for the Netherlands with Katey hanging on for a silver medal for team USA. 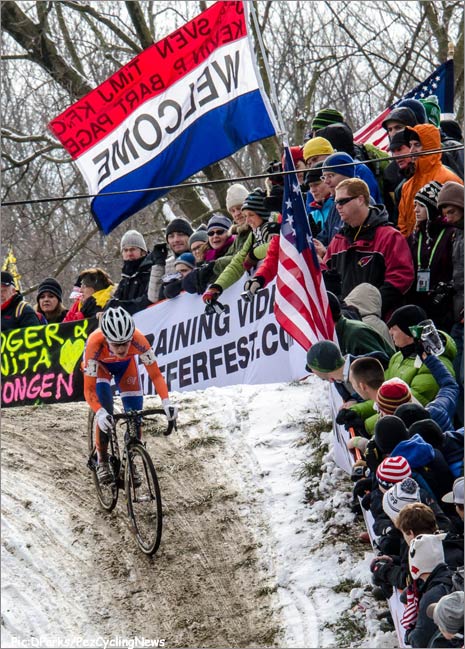 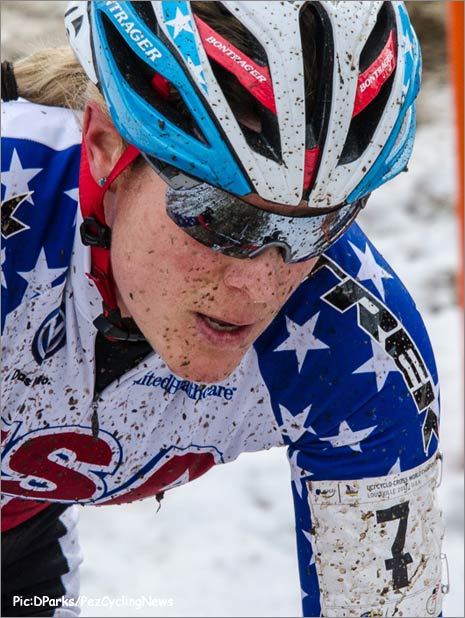 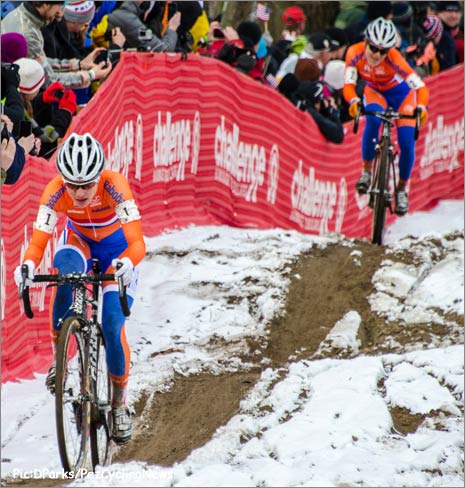 The weather was getting milder by the start of the U23 race with the sun actually making a brief appearance. The mud was starting to make its presence known. I found a spot along the barriers where the best line brought the riders up close and personal. Team Netherlands seemed unstoppable as Mike Teunissen brought home the third Gold Medal of the day for the Dutch. 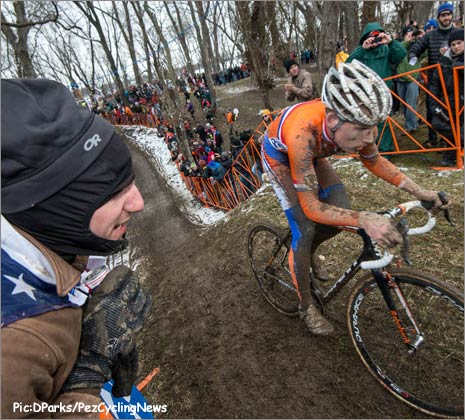 It’s now time for the main event of the day. The Elite Mens race is about to start and the number of fans along the course has almost doubled in size in a matter of minutes. Where were all these people? The venue is now a full on mud fest with people falling on their faces just trying to walk around the course. The Americans have high hopes for a good result and wish to do well in front of a hometown crowd of over 10,000 Cross fanatics. The Belgians all want to be the first to win a gold medal outside of Europe. Here’s how it went down in pictures. 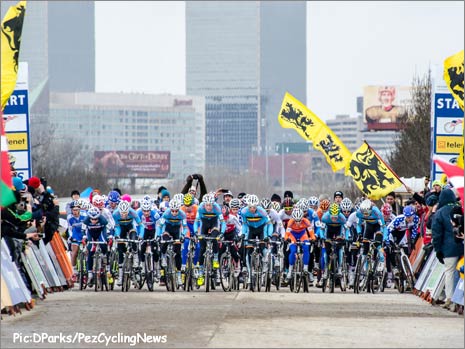 One of Team USA’s best shots for a top 5 finish had his plans thwarted right from the start. Jeremy Powers almost didn’t make it out of the starting gate as he was forced into the barriers. 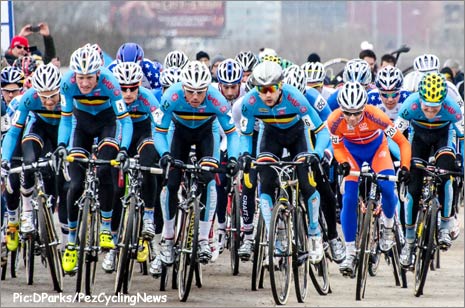 The Belgian contingent started in front and stayed there with another Dutchman in the mix. It’s the last time we see them in clean kits. 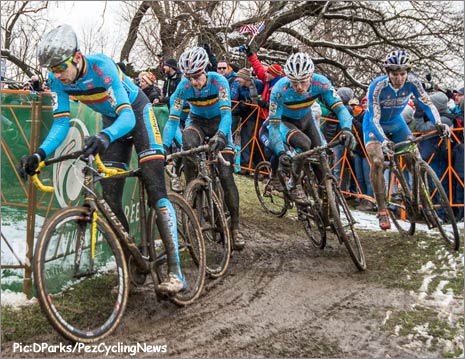 The Belgians take advantage of their lead and mark each other in the early going. 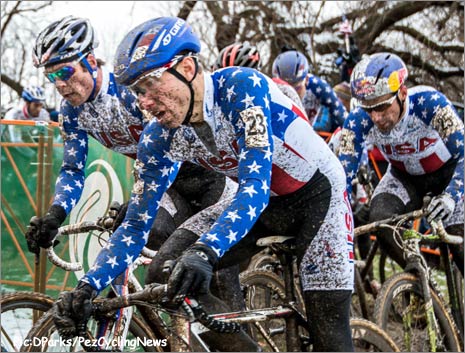 The top Americans stick together on the first lap as well. 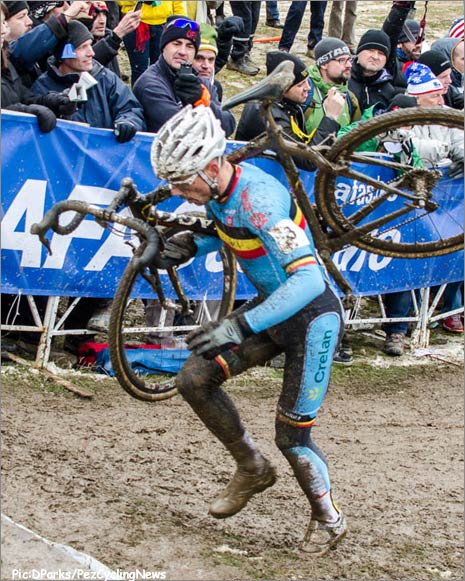 Though rideable in the frozen terrain of the prior days practice runs, race day mud forces Sven Nys to shoulder his bike. 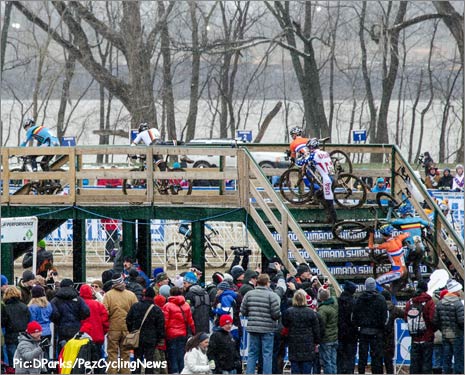 The mud makes for some sketchy footwork on the flyover. 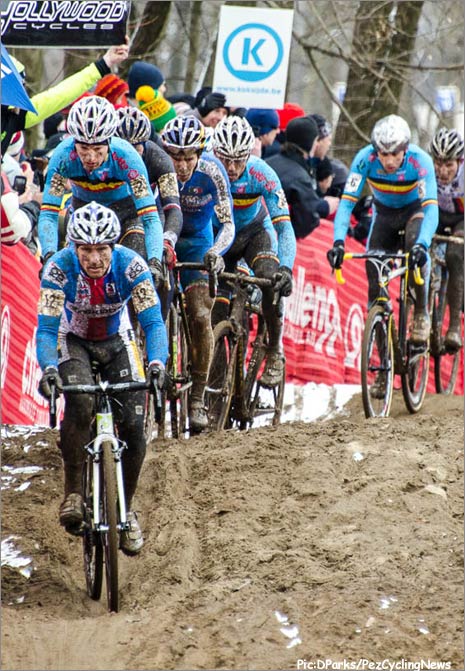 The sand is still frozen enough in the early going to make it a non factor. 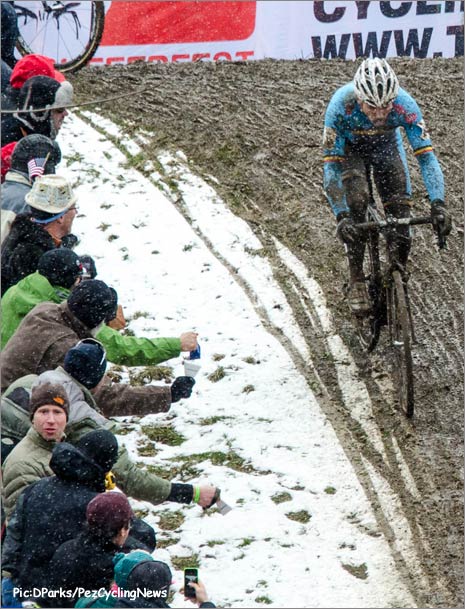 Nyes shows off his technical prowess on the slick downhill. 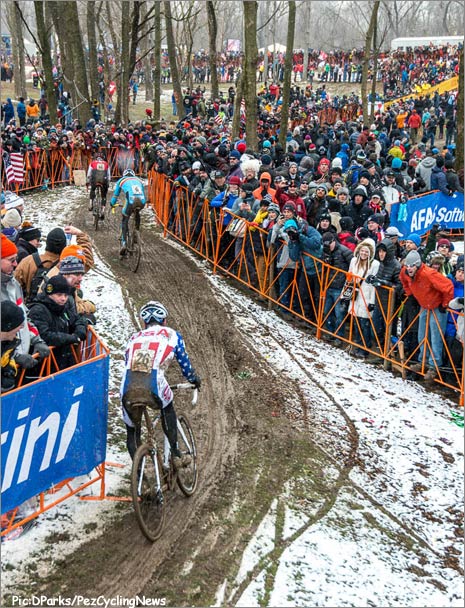 The crowds were thick as the snow began to fall halfway into the race. 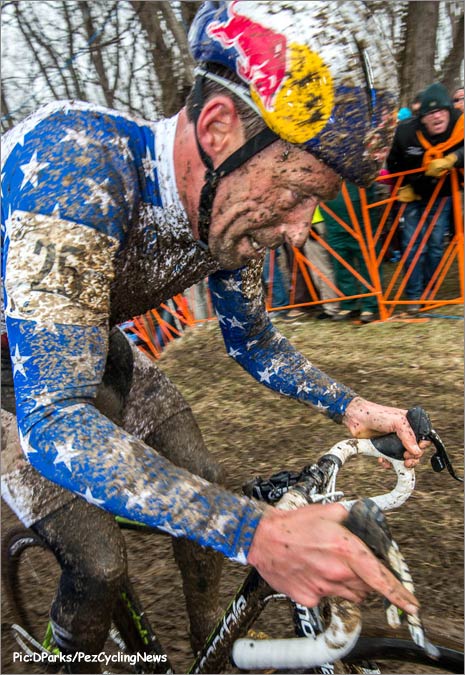 Tim Johnson showing his determination, and bare hands, as he hugs the barriers while cresting a hill. 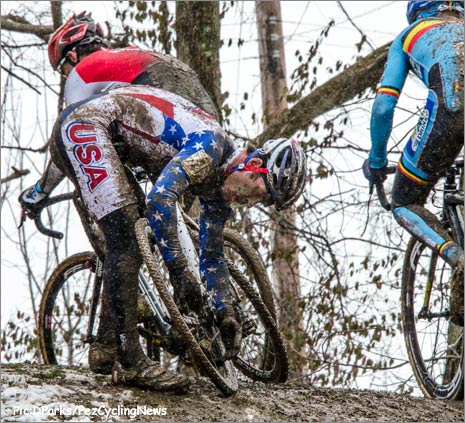 My heart sank as I watched American National Champion Jonathan Page fuss with his drivetrain and his chance of a top 10 finish slipping away with each passing rider. 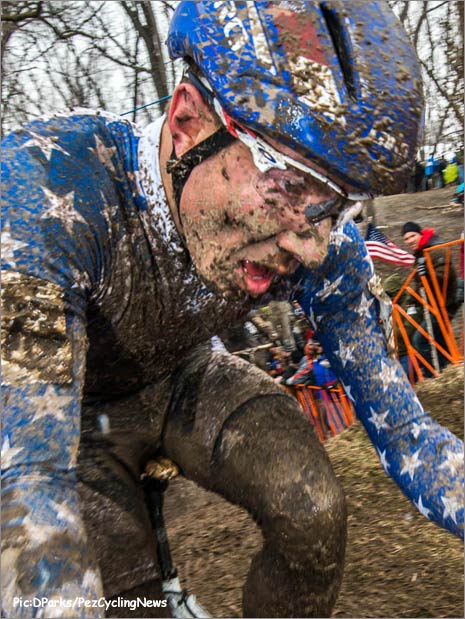 Jeremy Powers gave it everything he had, and then some. 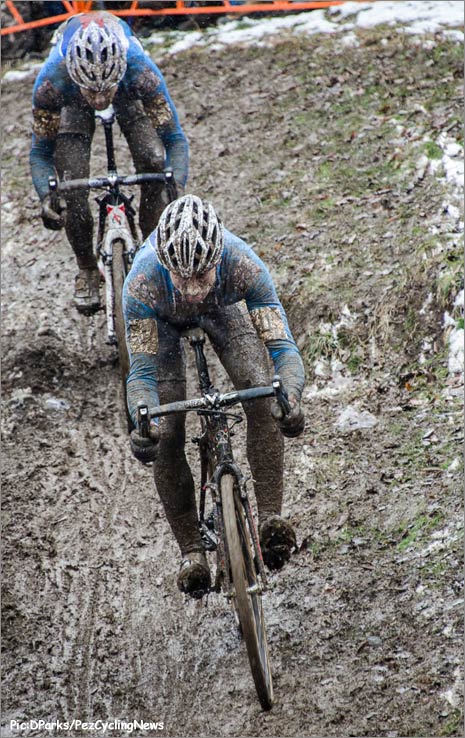 The mud was so bad towards the end it was nearly impossible to make out the riders numbers. 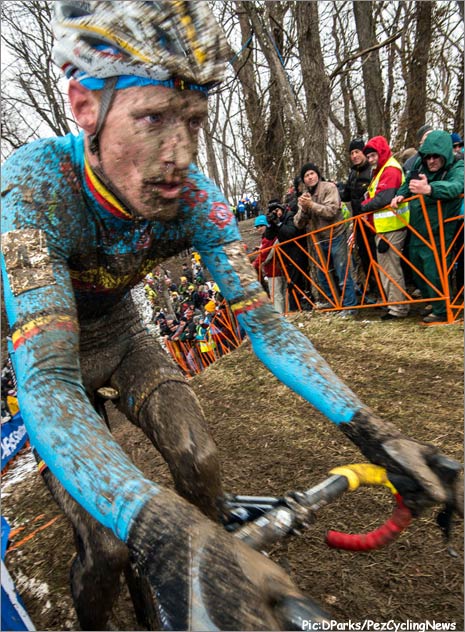 Klaas Vantornout battled with Sven Nys right to the end. 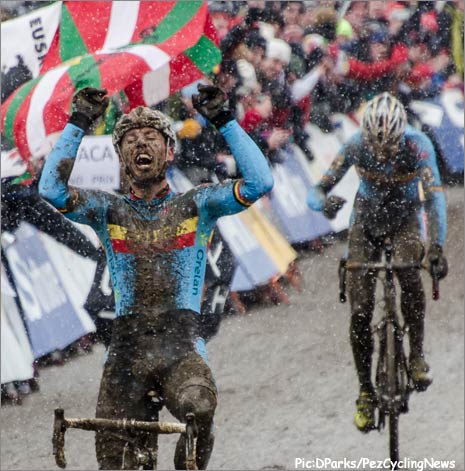 Sven rides the boards the last time through and gains a few precious seconds on Klaas to hold him off for the victory. 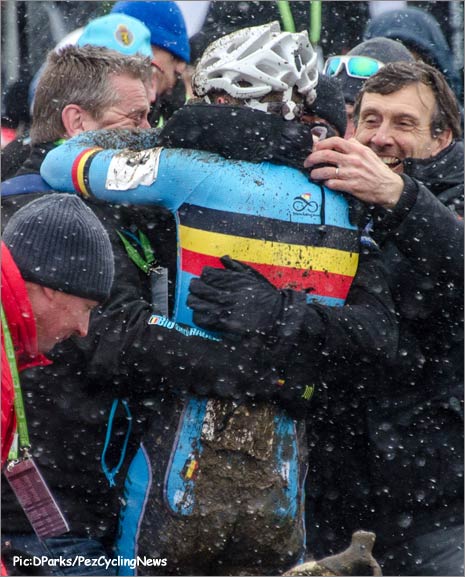 Sven’s camp is elated and it’s time for a group hug.

A group of Belgian fans raises their props and sings as they wait for the podium presentations.

This image would most likely not have happened had the races been run on Saturday and Sunday.

Louisville Worlds Race announcer Richard Fries has voiced the Cyclocross World Championships in Europe for the past few years. I asked him what made Louisville different from the worlds in Europe. “Louisville was louder with 10,000 fans than Europe is with 80,000”. I guess USA does do Cross different.

To see more of Darrell’s work check out www.darrellparks.com