France’s Thibaut Pinot prevailed in the 112th incarnation of the Giro di Lombardia to bring down the curtain on a remarkable cycling season. The Groupama-FDJ leader held on to the wheel of Italy’s Vincenzo Nibali in the terrible Muro di Sormano before dropping “the Shark of Messina” in the race’s penultimate climb. Nibali still took second place, while the talented Belgian Dylan Theuns won a sprint to complete the podium. 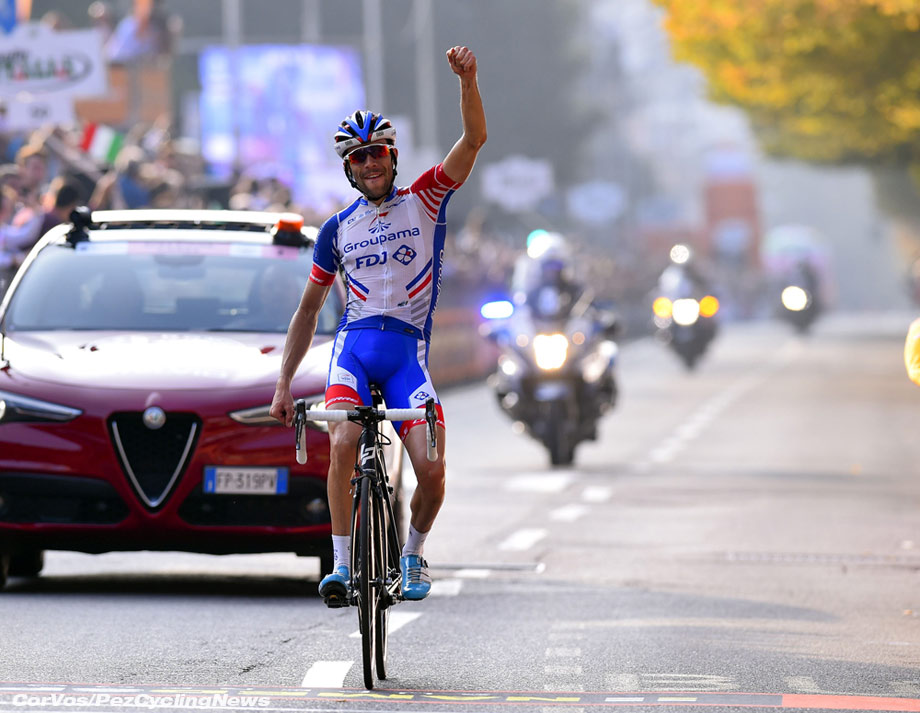 The air in the streets of Bergamo was perfumed with the smell of dead leaves as large and colourful buses conveyed the participants in this year’s Tour of Lombardy towards the starting line of the cycling season’s last great race, under the acclamations of thousands.

Inside the jumbo vehicles, which were forced to queue through the narrow alleys, smooth-legged athletes studied the day’s “percorso” with the usual mixture of excitement and dread. The maps given to them by the organizers described 241 kilometers of seesaw racing between the cathedral city and the beautiful lakeside town of Como. 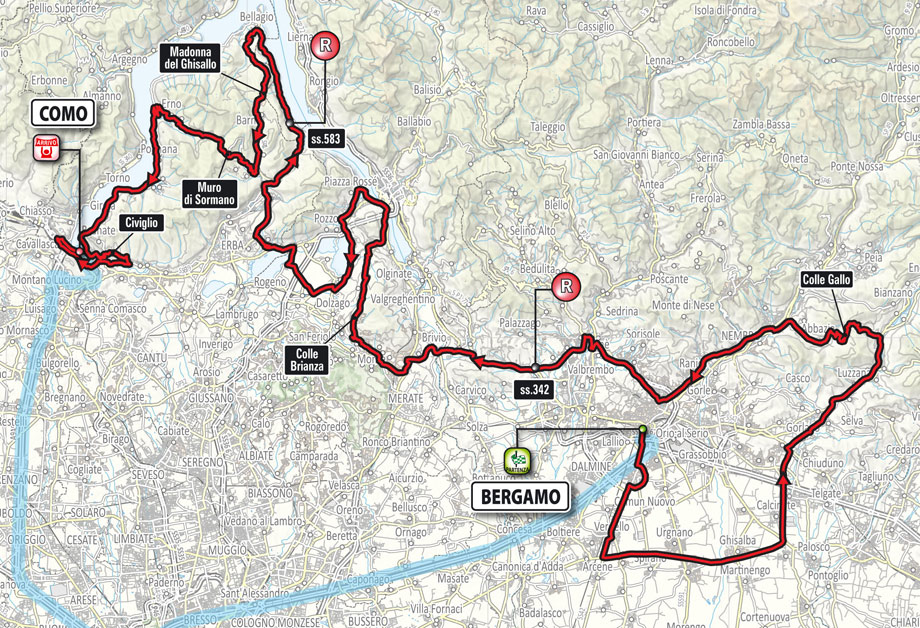 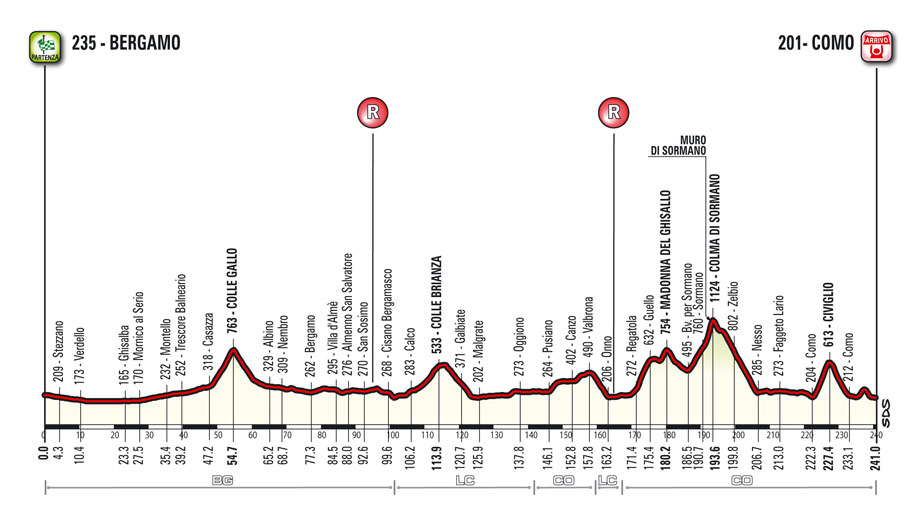 Outside, the “partenza” area was packed with passionate tifosi. One by one, the riders cycled through the crowds and scrawled their name on the starting sheet. Onlookers of all ages beseeched their idols to pose for pictures and sign autographs, defending champion Vincenzo Nibali, “the Shark of Messina”, and newly crowned “campeon del mundo” Alejandro Valverde, decked out in rainbow stripes, by far the two most popular figures. 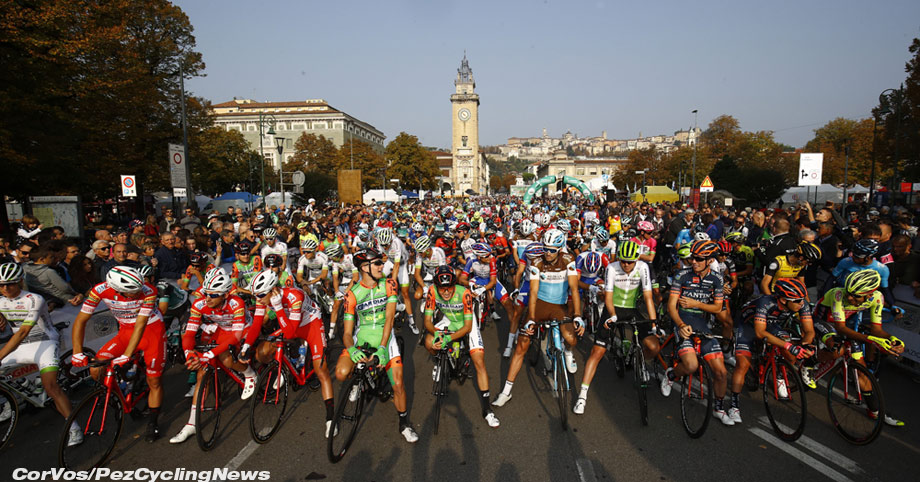 Then, at 10:50am, as the riders rolled out of Bergamo, “la classica delle foglie morte”, the last and most scenic of cycling’s five ‘Monuments’, got under way.

Casual observers and connoisseurs spectating around the world could look forward to a televisual feast of mountains and lakes over the following few hours, but for the “ciclisti” a tough athletic challenge awaited. 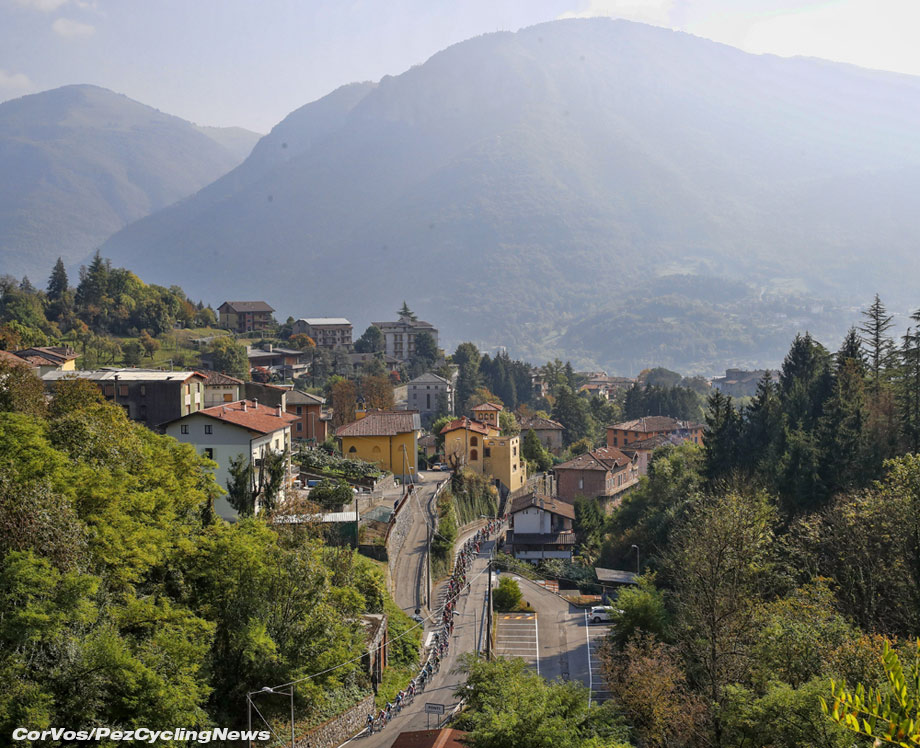 Pauwels Peters Out
The opening “chilometri” proved uneventful, save for the puzzling news that Belgium’s Serge Pauwels, winner of the 2017 Tour de Yorkshire, had dropped out of the race before the locals had even had time to figure out how to pronounce his name.

Invited teams such as Bardiani CSF, Androni Sidermec and Israel Cycling Academy provided the early entertainment as the “corsa” gradually came to life, but the elite formations kept them in check. However, the proverbial elastic eventually snapped after twenty kilometres of action, a copious consortium of baroudeurs breaking free and accruing a lead of several minutes. 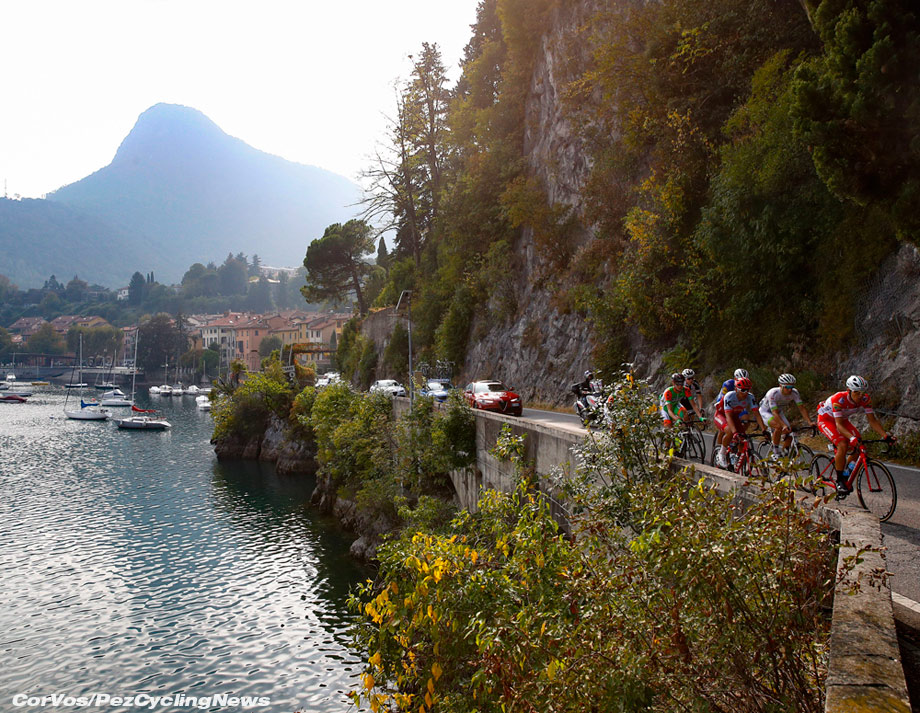 Bergamo’s red-tiled roofs had barely vanished in the distance behind the riders when the road beneath their tires began to rise, the imposing Colle Gallo looming on the horizon. The leaders could boast an advantage over the peloton of just under 6 minutes at the foot. The climb, scaled at a moderate pace, produced no major alteration in the physiognomy of the race. At the back, the Movistar train, promoting Valverde’s interests, and the Groupama-FDJ formation, riding for Milano-Torino winner Thibaut Pinot, maintained a tempo designed to keep the escapees within reach. 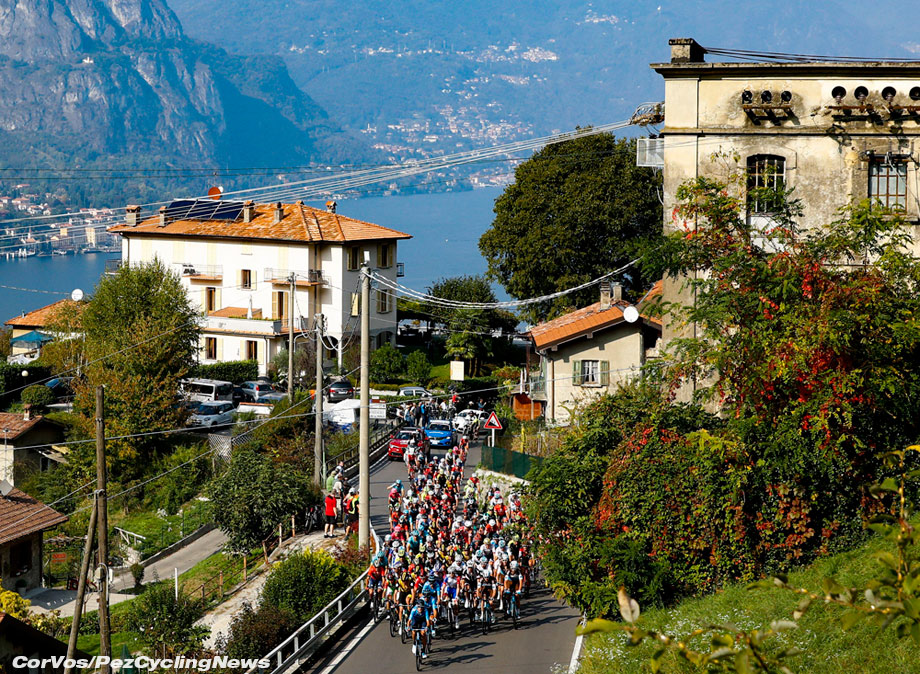 Little changed during the fifty kilometres leading up to the day’s second obstacle, the modest Colle Brianza, which the octet crested together, showing no signs of exhaustion. Cameramen were reduced to taking shots of Valverde’s special new “world champion’s bike” from a variety of angles in what looked like increasingly desperate efforts to keep viewers interested.

Roglic’s Reckoning
But excitement was on its way, with the arduous climbs looking over Lake Como next on the menu. 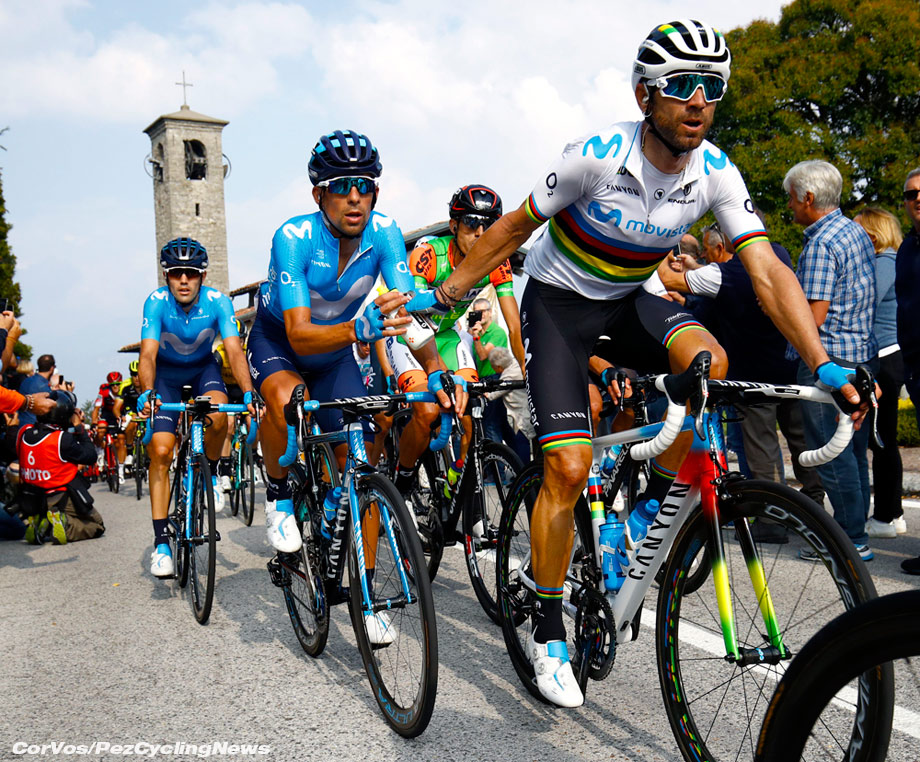 True, the fabled ascent up to the chapel of La Madonna del Ghisallo (8.6 kilometres and an average gradient of 6.2%), scene in the past of many of Fausto Coppi’s victorious attacks, delivered little on this occasion besides stunning views and the odd initiative from the likes of Astana’s Jan Hirt. “La Madonna”, patron saint of cyclists, failed to inspire any of the favorites to follow in the Campionissimo’s footsteps, the distance separating the climb from the finish line (over sixty kilometers) and the prospect of the terrible Muro di Sormano no doubt dampening their enthusiasm.

Yet, in the following kilometers the pressure increased, as Roglic’s black and yellow Lotto NL-Jumbo domestiques grabbed the reins of the peloton from the hands of Nibali’s red guard and accelerated dramatically. The break-away, perhaps in retrospect more of a plea for contract extensions than a bid for victory, was caught fifty kilometers from Como. Its size had earlier been halved, with Bonnamour, Storer, Orsini and Tonelli the last survivors. 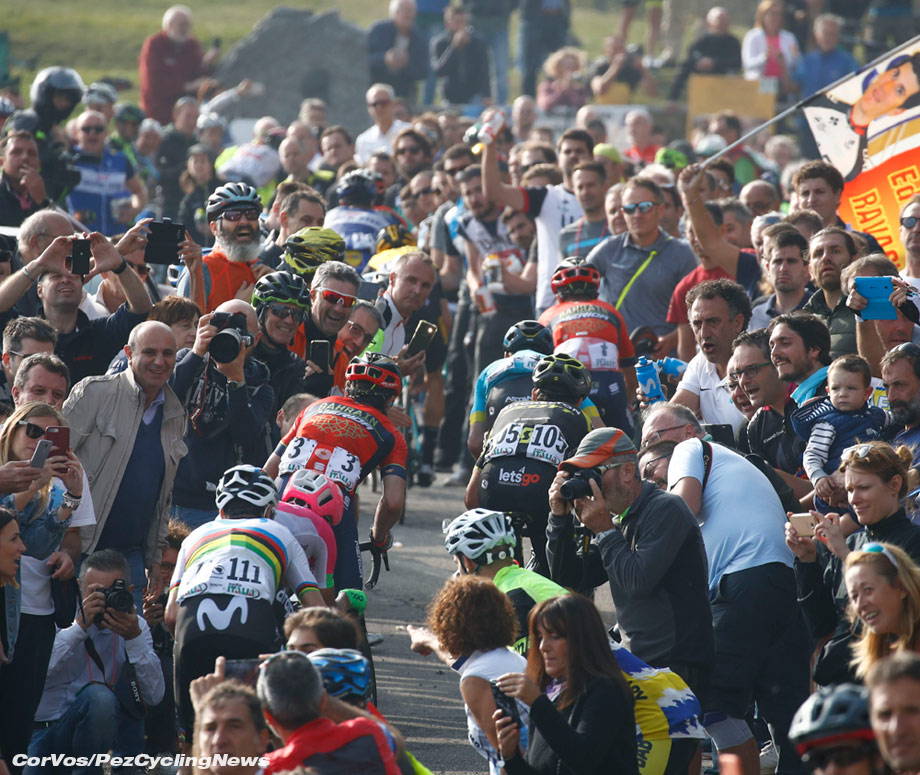 Still the Jumbo juggernaut powered forward. Koen Bouwman, Antwan Tolhoek and Robert Gesink burned themselves out like the stages of a step rocket, paving the way for their leader’s attack, which came as soon as the gargantuan gradients of the Muro di Sormano (averaging at 15.8%) kicked in. Roglic broke loose and pedalled in slow motion towards the summit but Nibali counter-attacked, followed like his shadow by Pinot, and caught the Slovene.

“Lo Squalo” then dropped the former skier but in the descent Roglic made his way back, as Nibali, Pinot and the Lotto NL-Jumbo leader formed a scintillating trio at the head of the race. It swelled to a quartet shortly thereafter when Sky’s Colombian prodigy Egan Bernal joined them after taking huge risks on the way down the mountain.

Meanwhile, Valverde and most of the other big names reached the top of “the Wall” nearly a minute in arrears. AG2R’s Romain Bardet, brought down by a rogue photographer on the impossibly steep slopes, had by then lost all hope.

Pinot’s Pride
Nibali, Pinot, Roglic and Bernal collaborated as they approached the bottom of Il Lombardia’s penultimate climb, the Civiglio, situated less than twenty kilometers from the finish line. However, on the lower ramps of the ascent this harmony was disrupted as Pinot attacked, crucifying a tired-looking Roglic. Nibali held on, while Bernal fell back, battling like a lion to limit his losses but to no avail. Further back, Valverde lost foot completely, his beautiful rainbow jersey receding rapidly behind what little remained of the peloton. 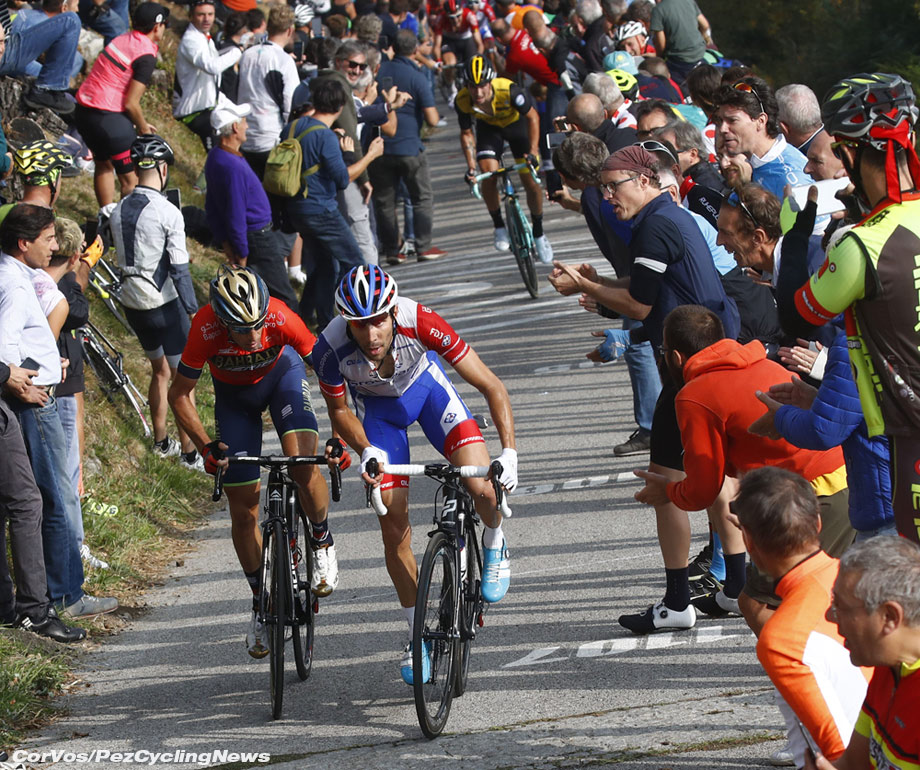 Pinot and Nibali rubbed shoulders as the summit of the Civiglio came into sight. But then the Italian suddenly seemed to falter, and Pinot, glancing gluttonously at his archrival, chose to accelerate, leaving “the Shark of the Straights” behind him. Under the gantry, the Frenchman recorded an advantage of twenty seconds over the defending champion, the resurgent Irishman Dan Martin cutting the line another twenty seconds later, all but too late.

The Groupama-FDJ leader stood his ground in the downhill section that followed and then increased his lead as he negotiated his way up the short Monte Olimpino. The subsequent plunge into Como felt like a formality.

A few months after surrendering his place on the podium of the Giro d’Italia on the nauseating slopes of the Colle di San Pantaleone, the Frenchman, whose fondness for Italy is well known, could savor his success on the banks of the country’s most beautiful lake. Cutting the line, Pinot punched the air, bearing the expression of a man whose love had finally been requited. 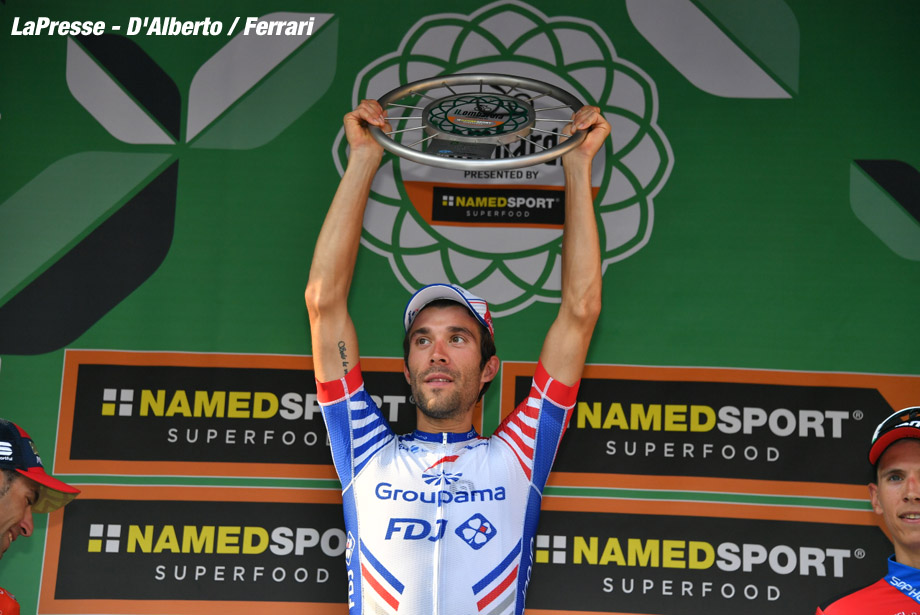