The 2016 Tour de Farnce route was revealed Tuesday in Paris, and PEZ was there. Here’s our PEZ-Clusive look inside the presentation.

The third Tuesday in October is hallowed to Tour de France fans, as the day they release the trailer for what will be the hottest blockbuster on the 2016 cycling calendar. Today is considered cycling’s day out, akin in fanfare to a Hollywood movie premier, as the ASO announces the 2016 Tour de France route. Gone are the helmets, glasses, and carbon frames. In fact, the only carbon you will see today might be on the bottom of someone’s expensive Italian shoes. 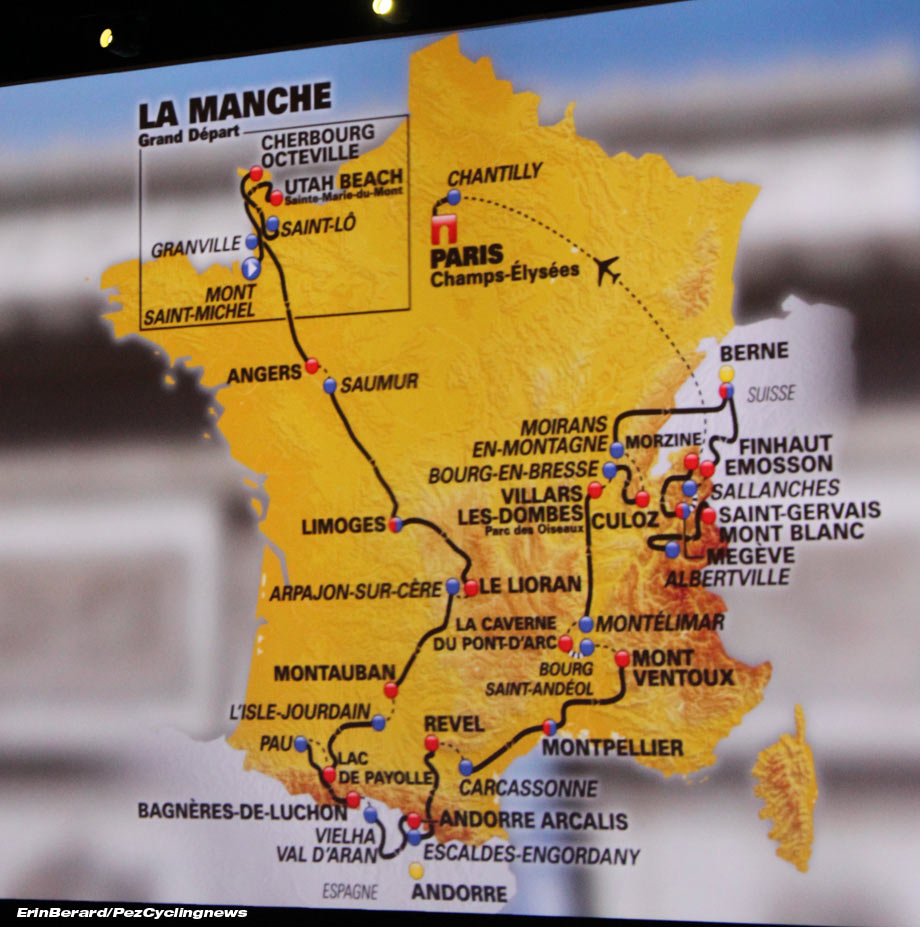 Imagine the ASO as the presenting studio, host of this party, complete with exclusive invitations, the pre-show red carpet, the rider stars, buzzing paparazzi and press, candid interviews, flashing cameras, agent – manager – sponsor schmoozing, studio execs, and a big theater in Paris. Then comes the big moment as the lights go dim and the video rolls, and one embarks on a visual journey along the plains, mountains, coastlines, and countries that will make its cinematic debut this July to millions of fans worldwide. 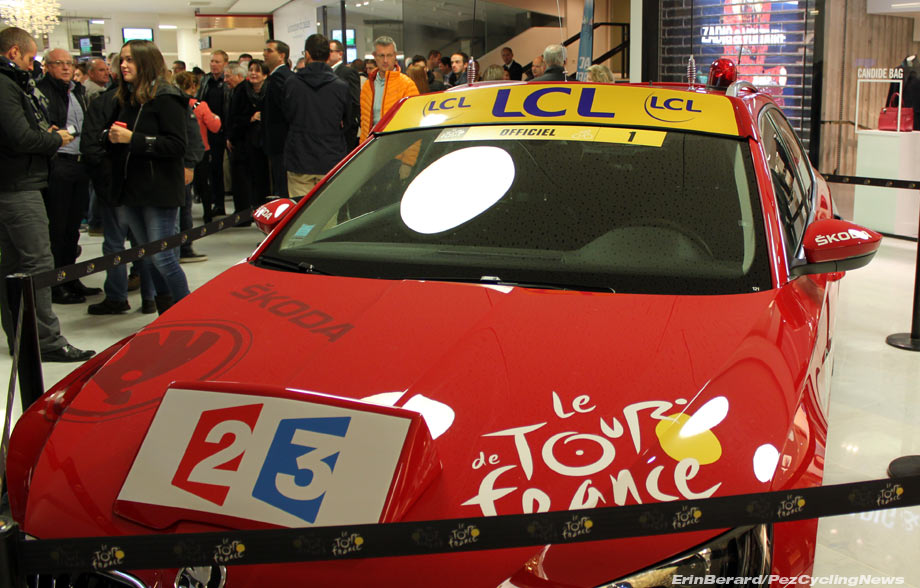 As I enjoyed my Nescafé stick instant coffee with mini moos in my miniscule Parisian hotel room, questions began swirling in my mind, which cities, which climbs? We already know about the epic start planned behind the backdrop of Mont Saint Michel but then what? Spain, Switzerland? Bloggers have been sleuthing the entire route for the past few months, calling local mayor’s offices and interviewing hotel owners for who had received ASO bookings. Whose guesses would prove correct? What surprises, would be revealed?

Live from Paris, Pez is here. 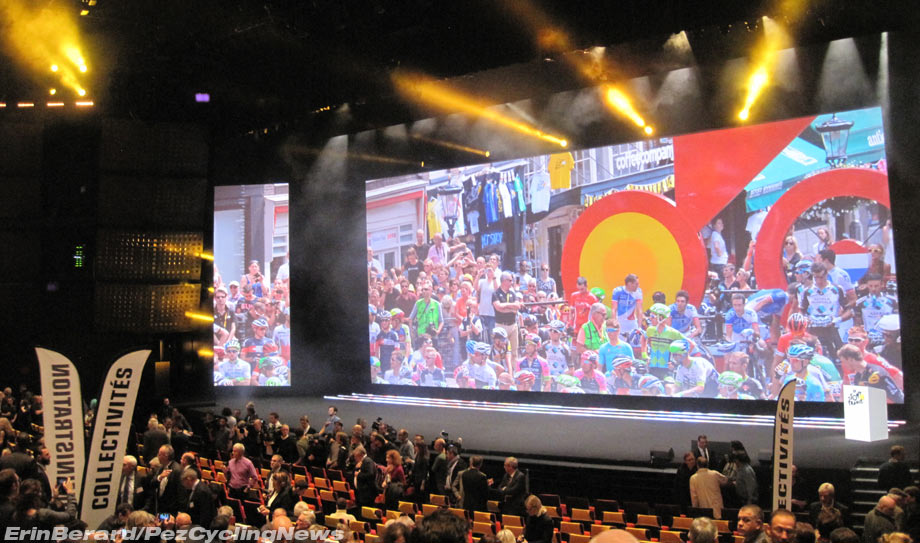 Arriving at Le Palais des Congrès, the somber concrete façade, typically French, neatly hides the colorful show about to unfold inside. You have to appreciate the French love of secrecy and mystère… Entering the Palais, I immediately start to scout out past and present riders, agents, managers, the who’s who of cycling. The marquee riders will enter at the last minute, in true red carpet style, this pre-show outside the theater is the time to find the legends of the sport. I spy Hinaut, Poulidor, Jalabert, and Virenque. 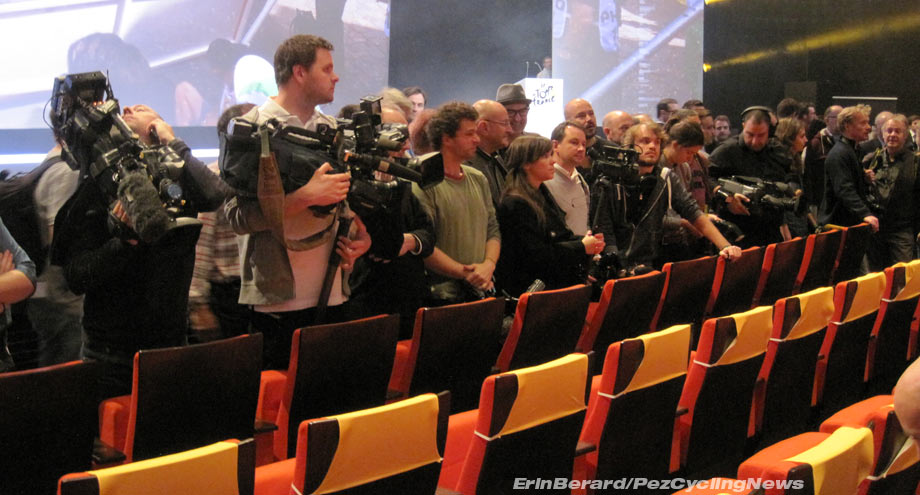 The theater finally opened and armed with our green press invitations, I entered the show and quickly grabbed our seats, before making my way down to the front row red carpet to await the arrival of the rider stars.

Making my way to the front of the theater, I noticed an invasion of blue and white striped scarves descending on the VIP area, and Le Grand Départ Manche VIP goody schwag bags in-hand! Pez loves Normandy, way to roll out your Grand Départ in true first-class style, every Tour fan does love their cadeaux from the Tour Official Sponsor Caravan, why not start in October? I just wanted to know what was in the bag… probably not spa treatments or designer watches but what… Saint Michel butter cookies, Cancale oysters, camembert samples?

I spotted Astana General Manager Alexander Vinokourov in the audience kindly signing autographs, as well as Sports Director Alain Gallopin representing Trek Factory Racing. As I waited with the mass of photographers and reporters in front of the yellow backed rider VIP seats in front, I noticed an elderly fan walking each row, inspecting up close the name tags on each. Just behind him sat a row of youth cycling VIPS, representing with their yellow Normandie jerseys, patiently waiting for the stars, autograph pads ready. 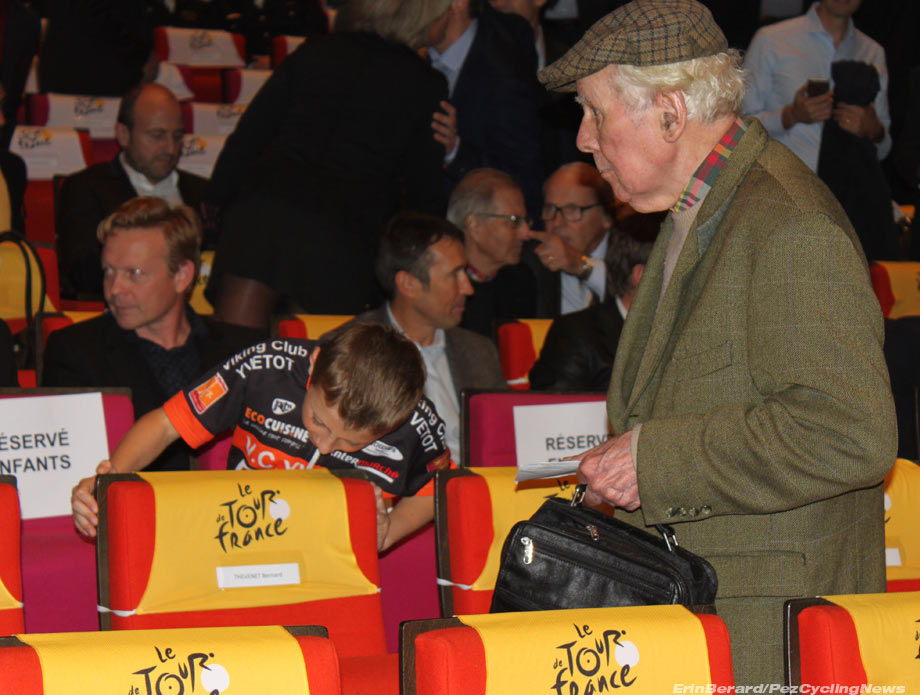 The lights dimmed as the pro riders, many 2015 stage winners, were introduced and entered across the stage. Among those winners included Chris Froome, Tony Martin, Mark Cavendish, Romain Bardet, Thibaut Pinot, Daniel Teklehaimanot, and Christophe Riblon. 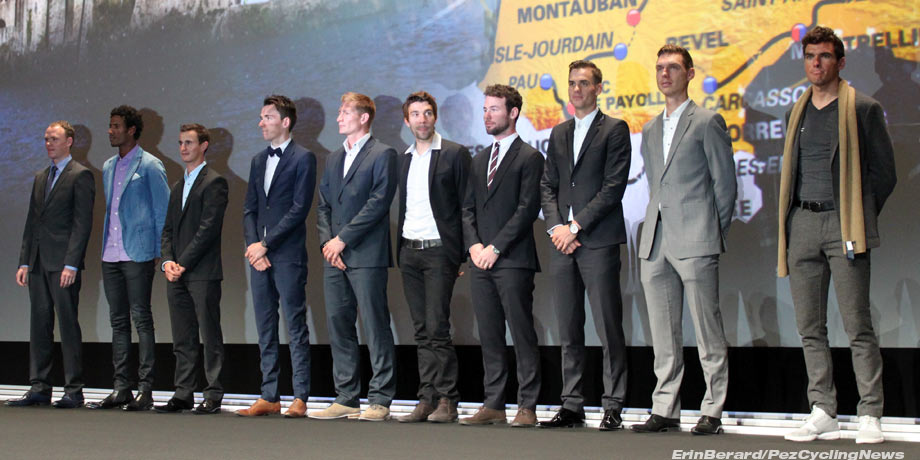 The Tour transcends age just as it does borders and that is exactly the mood today – international community spirit and the sharing of emotions the race evokes among all fans worldwide. In fact, this year’s official TDF poster Share the Emotion Partageons La Passion is composed of Tour tweets. #TDFPassion

The entire ASO presentation highlighted the global reach of the Tour and its efforts to continually strengthen its appeal, marking 2015 milestones such as the debut of the first African team and Daniel Teklehaimanot, the first African rider to be in the polka dot jersey. The Tour peloton now represents 30 nationalities and is broadcast in 190 countries. Christian Prudhomme, Director of the TDF, then treated the audience to a highlight reel of 2015, comprised of a GoPro style video of highs and lows of victories and crashes from last year, set oddly to a soundtrack combined from the best of ACDC and Tiësto. 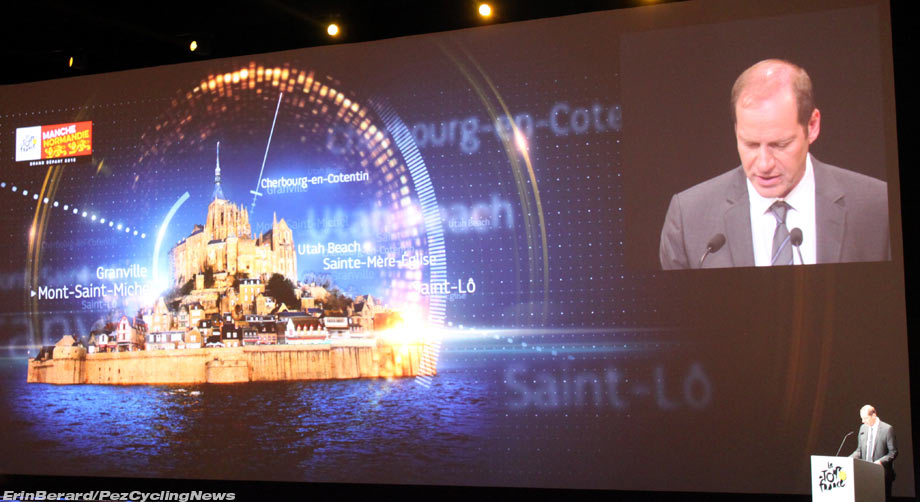 2016 marks the first time the Normandy department of La Manche in Northwest France will host a Grand Départ and Philippe Bas, Président du Conseil Departmental de la Manche, took the podium and offered a warm welcome and showed a short video of the region. There is already a TDF banner hanging from le Mont Saint-Michel itself. Vive le Tour!

He spoke of Normandy’s history, calling the three stages in La Manche a Tour de Souvenirs (Memories). July 2, 2016, on Stage 1, the Tour will travel 100 years of history in 188km, as it winds along the coastline and ends with an emotional finish along the D-Day beaches. The department is also proud since the Tour will spend 435km within La Manche, the longest it has ever stayed in one department. 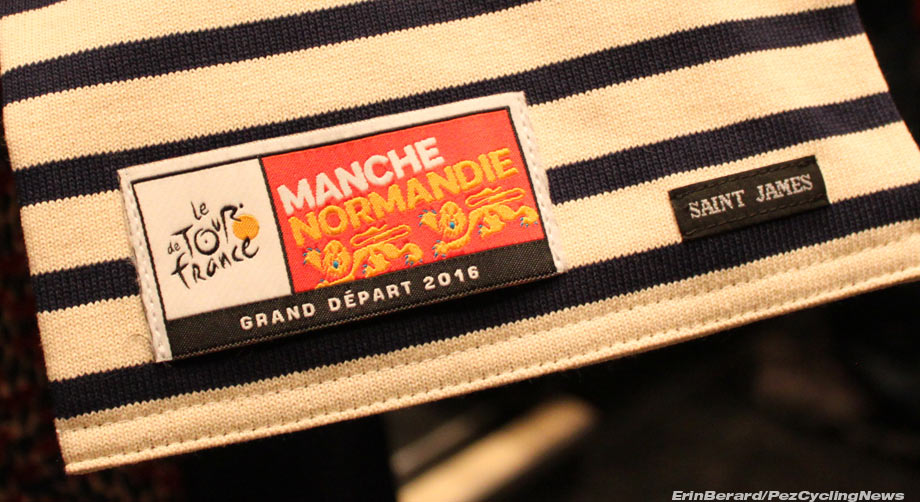 The time arrived for the viewing of this year’s route and before the audience could settle, we were treated to a Game of Thrones-style intro of Le Mont Saint Michel unfolding and emerging from the sand, amazing. From there, the yellow line took us around the country of France; through Spain, Andorra, Switzerland; and finally back into France and the Champs Élysée outlining every kilometer of the route along the way.

Sixteen new stage cities are showcased this year. Christian Prudhomme followed the video with a stage-by-stage introduction of each stage start and finish. The video differed from years past in that they included voice-overs from cycling journalists and broadcasters from around the world and showcased all of the foreign Grand Départ cities of Tour route fame. Froome’s podium speech from Le Champs Élysée last July wrapped up the video. 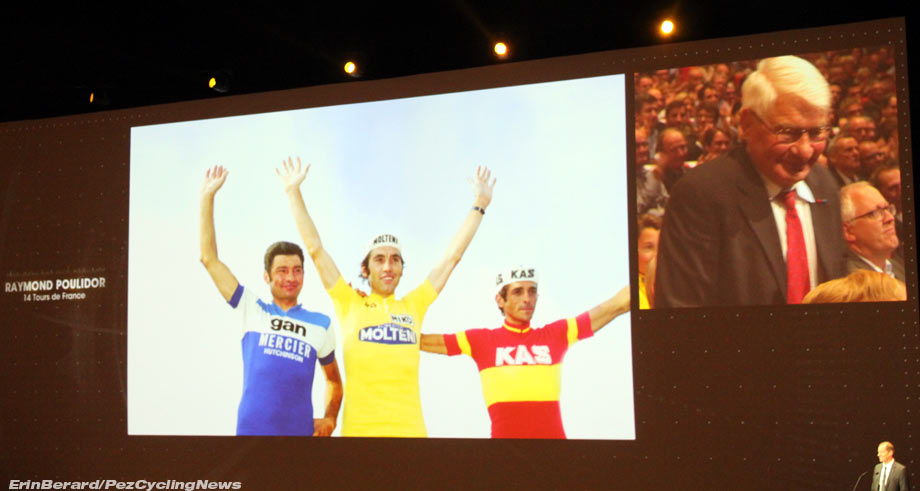 Just as any good Hollywood type event, a moment was taken to honor past greats, and today was Romain Poulidor’s moment. In 14 Tours, he finished 2nd three times and 3rd five times, 8 podium finishes total.

After the lights resumed, I caught up with French TV personality Vélo Club Host Gérard Holtz, who called this year’s route, a climbers’ route for sure but interesting and historic with all of its new cities and climbs. His eyes grew wide when speaking about the final mountain stage 19 finishing in Saint-Gervais Mont Blanc. He had just been vacationing there and winced at the steepness of the climbs. 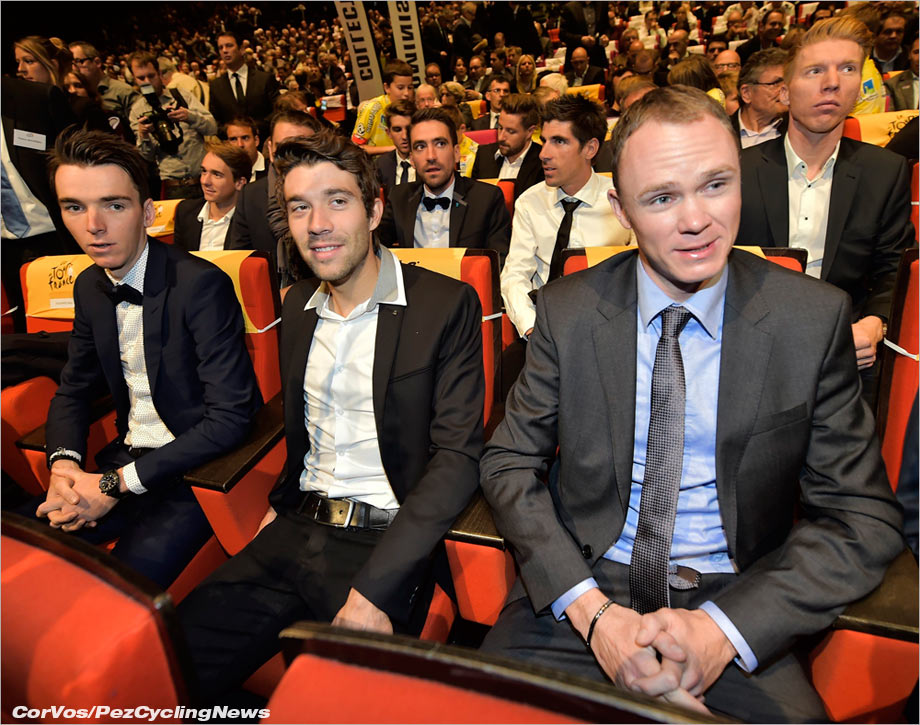 Richard Virenque, the former French darling of the polka dot jersey, mentioned the climbers will enjoy the Mègeve to Morzine, with a loaded “it will be intéressant,” complete with a French shrug. 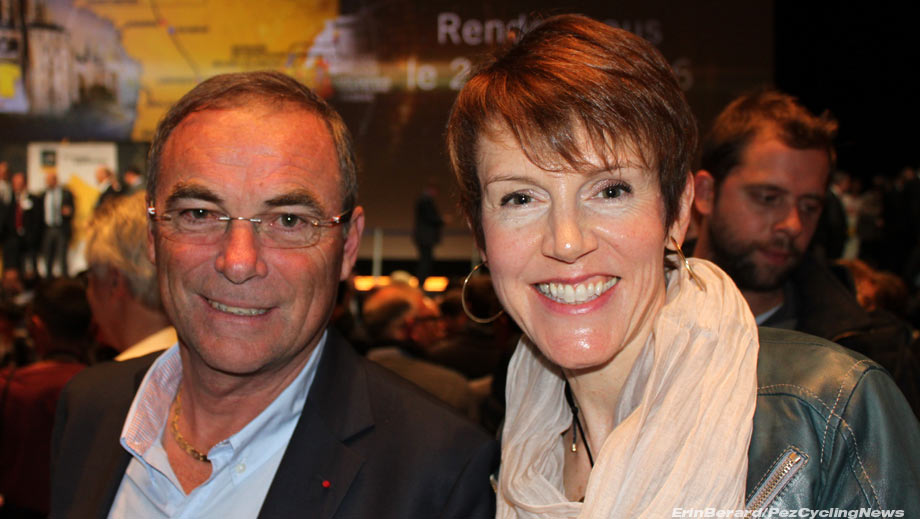 Erin gets her pics with the Badger – Bernard Hinault

The 103rd Tour de France starts Saturday July 2nd and runs through Sunday July 24th 2016. The 21 stages will cover a total distance of 3,519 kilometers (2,186 miles).
Highlights of this year’s Tour include:
• 9 flat stages
• 1 hilly stage
• 9 mountain stages with 4 summit finishes on Andorre Arcalis, Mont Ventoux, Finhaut-Emosson and Saint-Gervaix Mont Blanc
• 2 individual time trial stages (Totaling 54km)
• 2 rest days in Andorra and another in Berne, Switzerland
• 3 visits to the neighboring countries of Spain, the Principality of Andorra and Switzerland
• 16 new sites and stage cities, a phenomenon not seen in over 20 years of ASO planning
• Historic and memorable finish on Stage 2 at Utah Beach, Sainte-Marie-du-Mont
• L’Étape du Tour will be Stage 20 (146 km) Mègeve to Morzine
Stay tuned as we’ve got much more to come from Paris, and the full PEZ-Analysis of the ’16 Tour de France route.

Finally – we’ll leave you with the video of the route:

Entries for the Tour de Môn sportive are now open!