Stage Report: On the first mountain stage of the 2018 Tour de France, BMC’s Greg Van Avermaet fought to keep the yellow jersey on his back by going with the break of the day and holding off the GC men. From the same group, Julian Alaphilippe (Quick-Step Floors) attacked on the penultimate climb for a hard fought stage win. 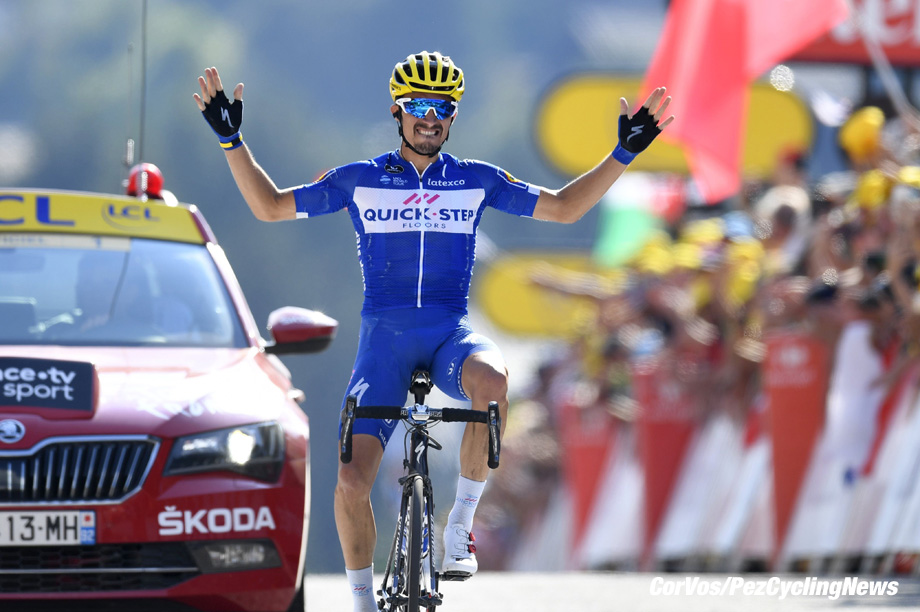 Van Avermaet and Alaphilippe were part of an early escape of 21 riders. Alaphilippe was not only after stage success, but also took the KOM jersey by crossing the summits of the Col de Bluffy and Montée du plateau des Glières. The Frenchman crossed to Lilian Calmejane (Direct Energie) on the Col de Romme, dropped him and soloed over the Col de la Colombière and all the way to the finish for stage and the mountains jersey. Van Avermaet was distanced when Alaphilippe made his move, but pushed on as hard as he could to finish fourth, 1:44 down on the stage winner. Behind Alaphilippe the was a battle for second place between Ion Izagirre (Bahrain-Merida) and Rein Taaramäe (Direct Energie) with the Spaniard getting the better of the Estonian.

A tough 158.5 kilometers from the lake-side of Annecy to La Grand Bornand with five categorized climbs before a 11.5 kilometer descent from La Colombière to the finish line. 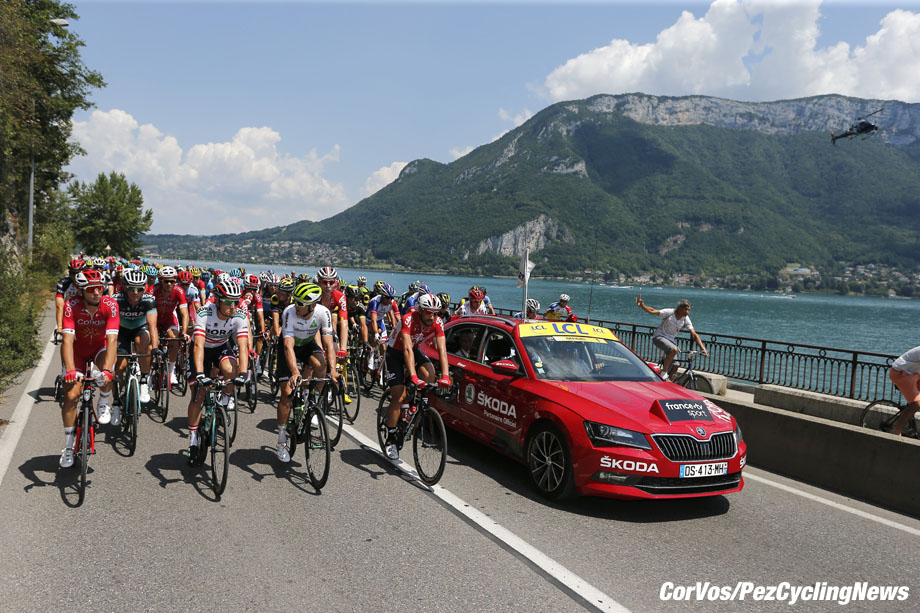 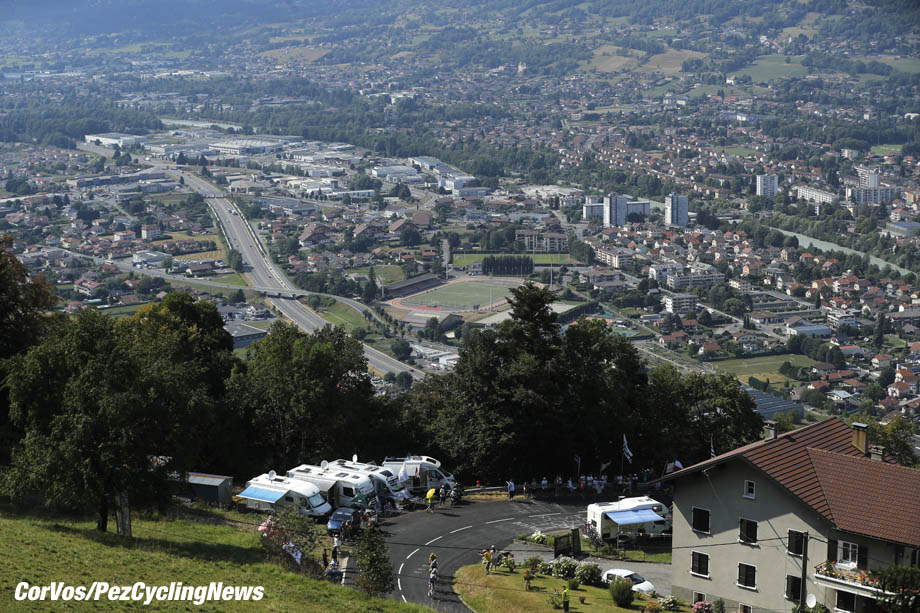 It was after the Cat 4 climb at kilometer 19 when the break of the day finally formed. 21 riders went clear. The break drove the pace as the peloton, led by Team Sky, settled into a fairly easy rhythm. 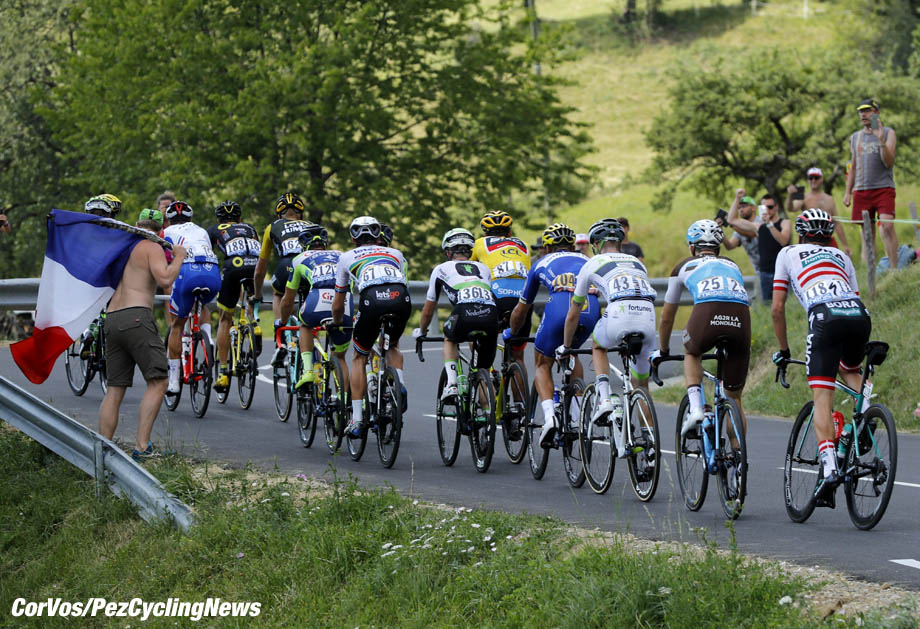 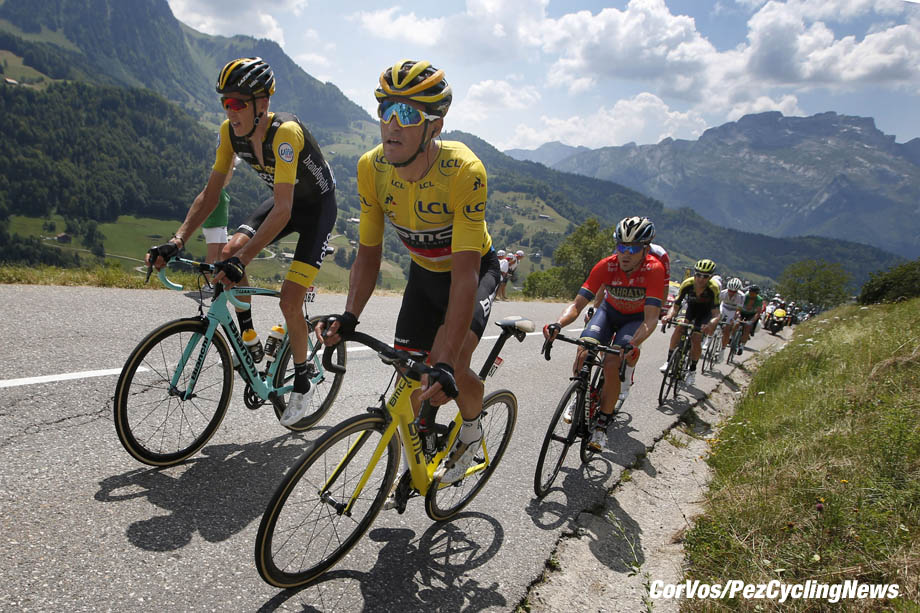 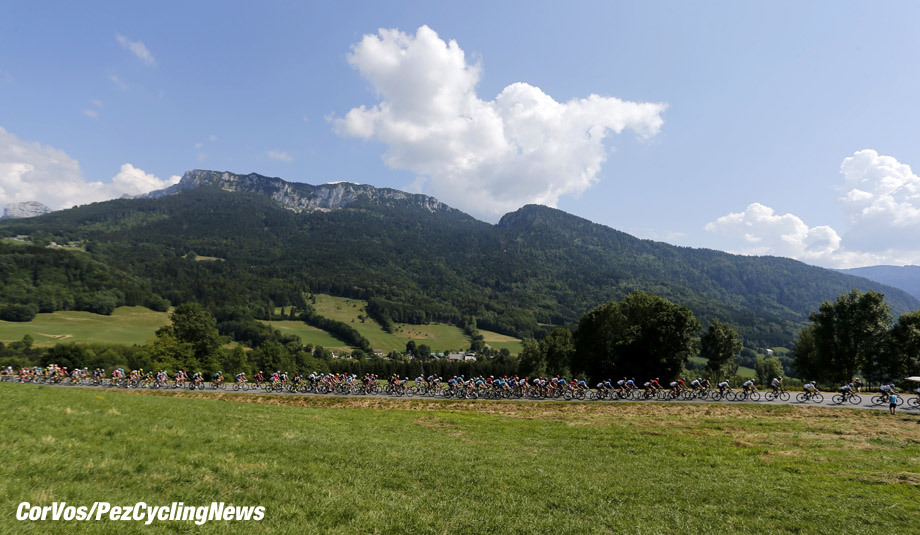 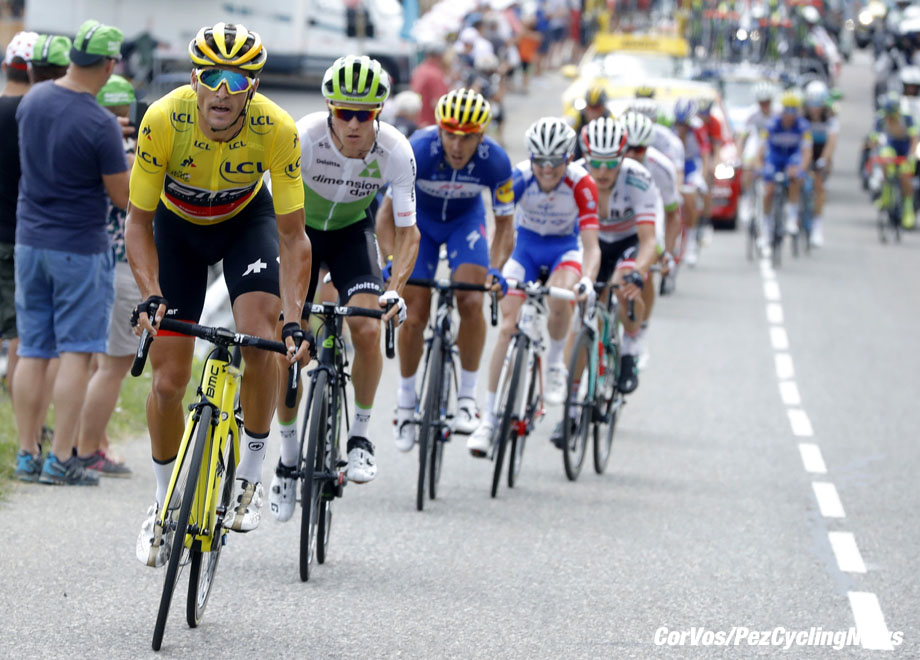 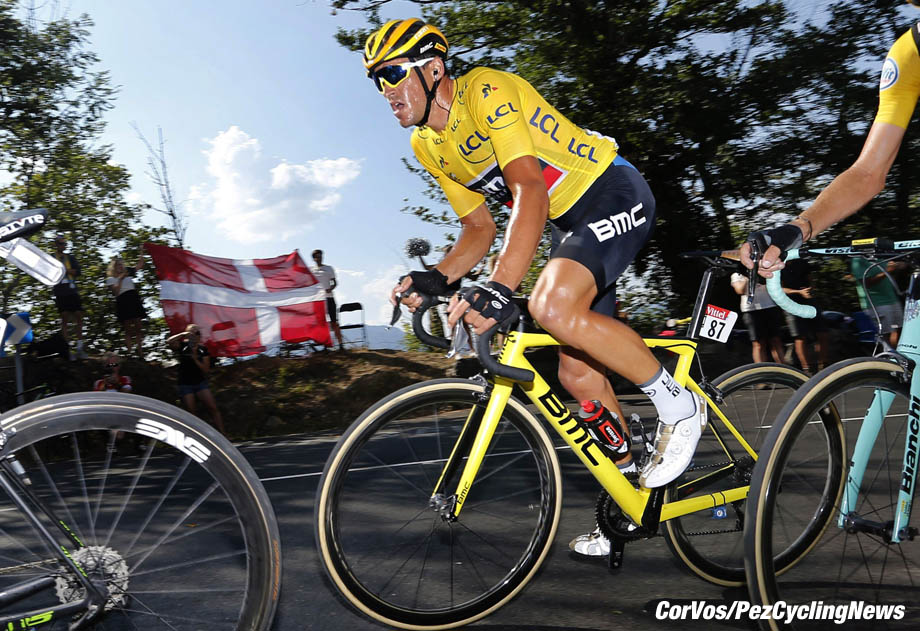 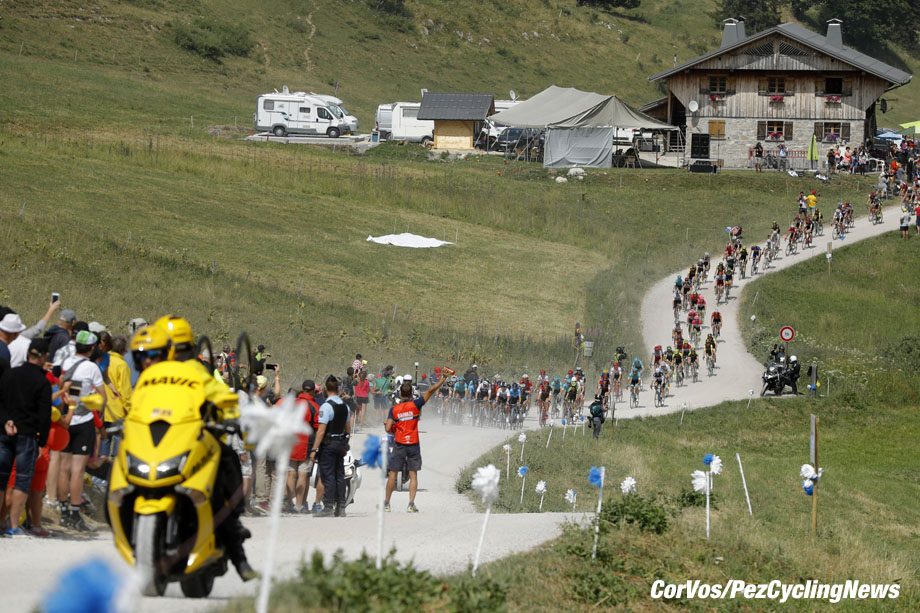 The group split up the col de la Croix-Fry, the first cat. 1 KOM of the 105th Tour de France, Molard beating Taaramäe at the top. Gaudu led the charge but was overtaken by Alaphilippe before the first H.C. KOM at Plateau des Glières. 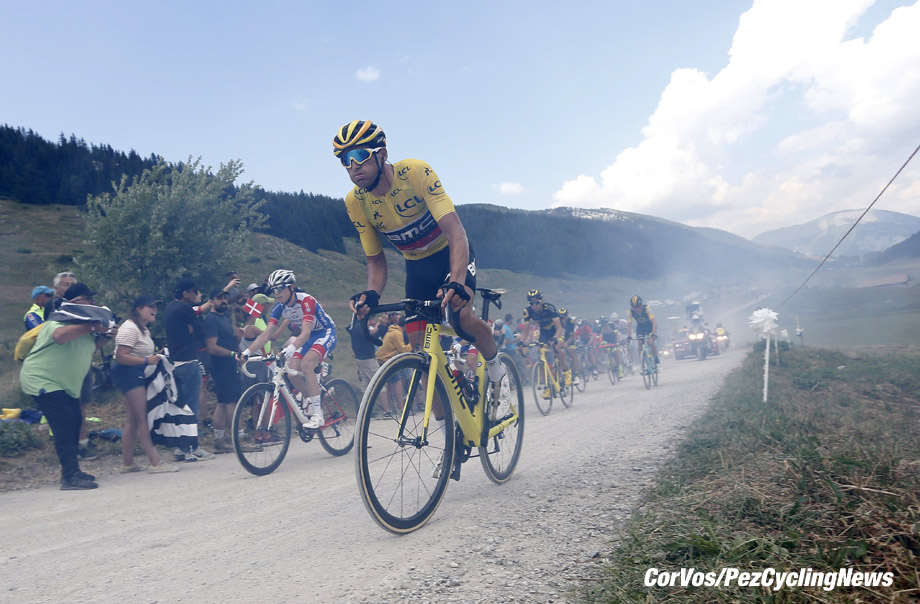 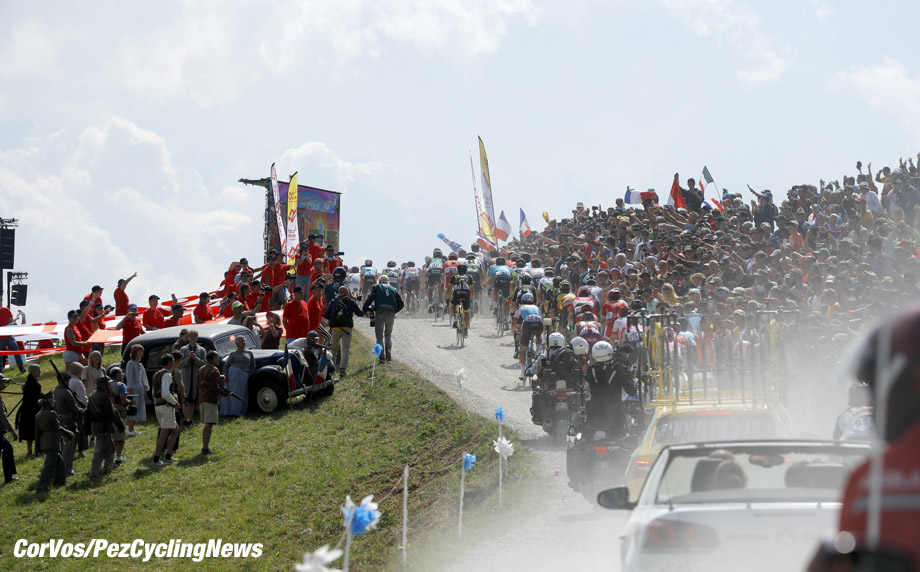 The winner of the Flèche Wallonne forged on by himself on the 1.8km long dirt road where Chris Froome (Sky) had a flat tyre before returning to the main peloton. The difference between the fifteen riders regrouped at the front and the bunch led by Team Sky was 6:40 with 90km to go. The gap kept increasing on the long downhill to the valley. 8 minutes was the maximum difference as 18 riders regrouped at the front, Bauer, Sagan and Pöstlberger being successively reeled in. 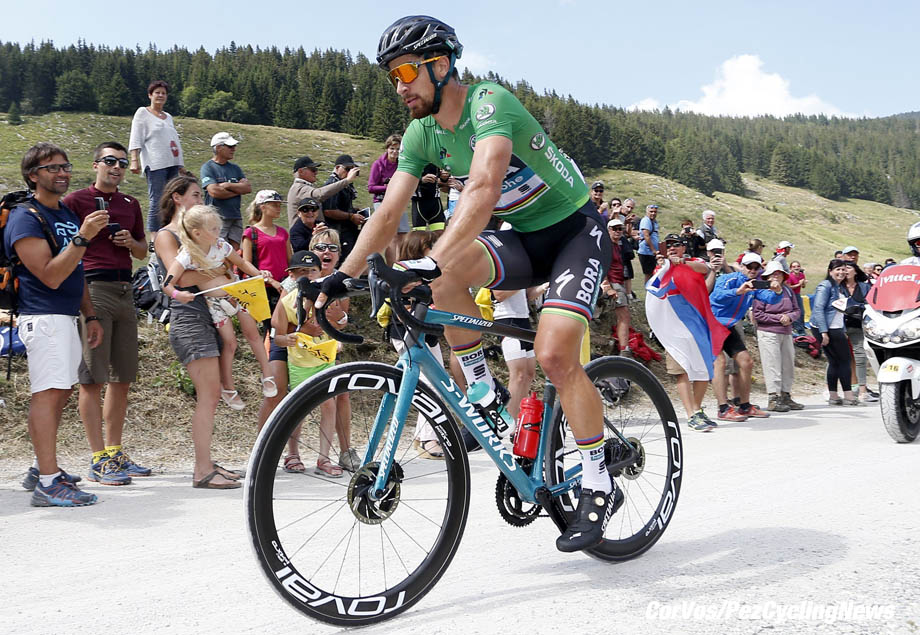 Taaramäe attacked 7km before the summit of Col de Romme while Warren Barguil (Fortuneo-Samsic) rode away from the peloton. Alaphilippe rejoined Taaramäe with 4km to go to the top of the hill. The Quick-Step rider went solo to crest in first position, 15 seconds ahead of the Estonian. He increased his advantage on the downhill and in the following ascent to Col de la Colombière. He crossed the last climb with 1:30 lead over the first chaser Ion Izagirre. 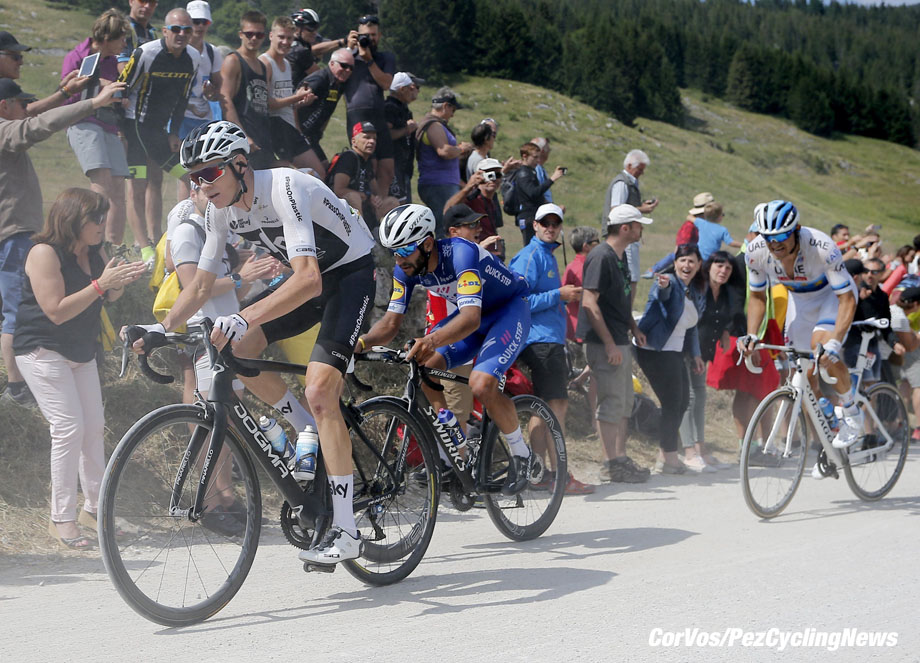 Sky’s Chris Froome had a problem on the gravel, but made it back to the peloton after a short chase. 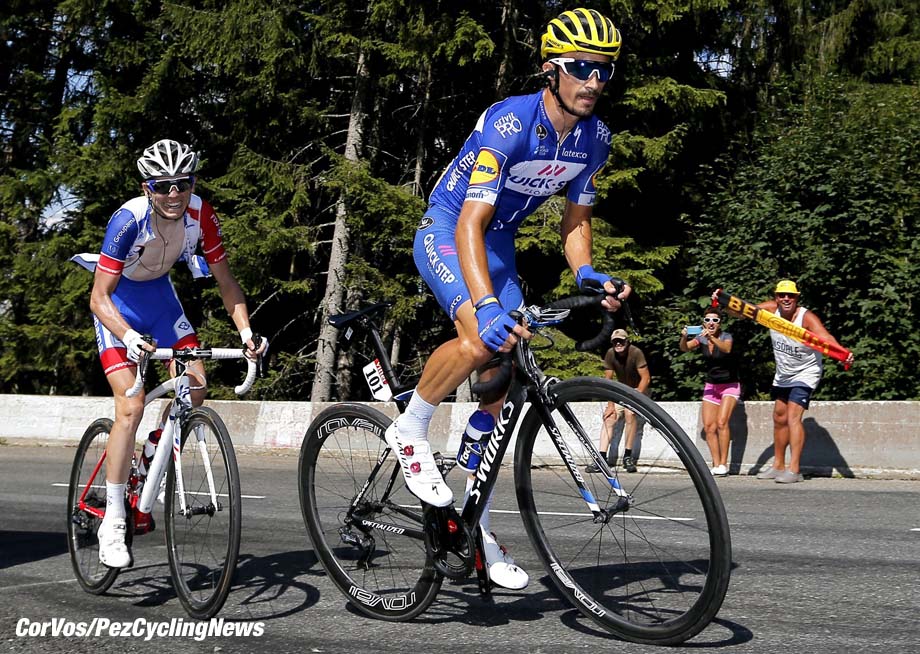 Alaphilippe didn’t make any mistakes on the descent to Le Grand-Bornand and had time to enjoy his first Tour de France victory. Fourth on the line, Van Avermaet, was designated the most combative rider of the day courageously retaining the yellow jersey. 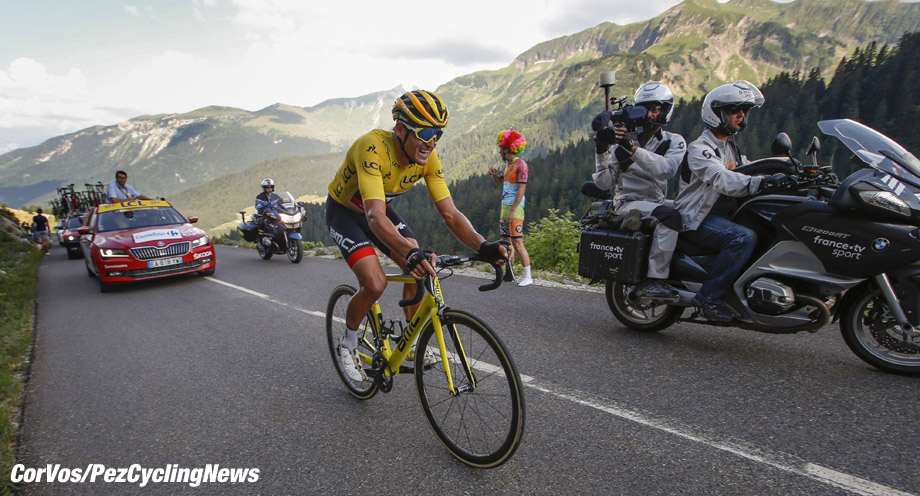 After the finish, stage 10 winner Julian Alaphilippe (Quick-Step Floors) spoke on TV: “There’s a lot of emotion, because winning at the Tour is not easy. I came close in my first Tour, two years ago, and to win in this way, it’s unexpected because, I don’t have the words, I’m just thinking about my family. I’m happy to make them happy. I’m happy for myself as well. Now I hope things go well for Bob on GC, and there are lots of great things still do, but today I really want to enjoy this.” 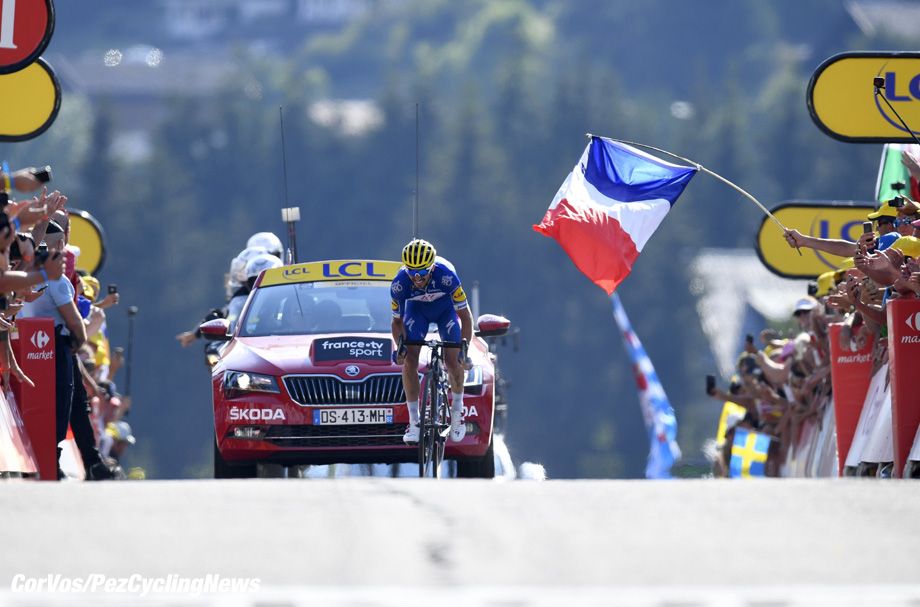 Greg Van Avermaet now has an overall lead of 2:22 on second placed Geraint Thomas (Sky), Alejandro Valverde (Movistar) is third at 3:10 and Astana’s Jakob Fuglsang is in fourth at 3:12. Van Avermaet said after the stage he didn’t expect to hold the jersey on stage 11, so we should have a different GC this time on Wednesday. Keep it PEZ. 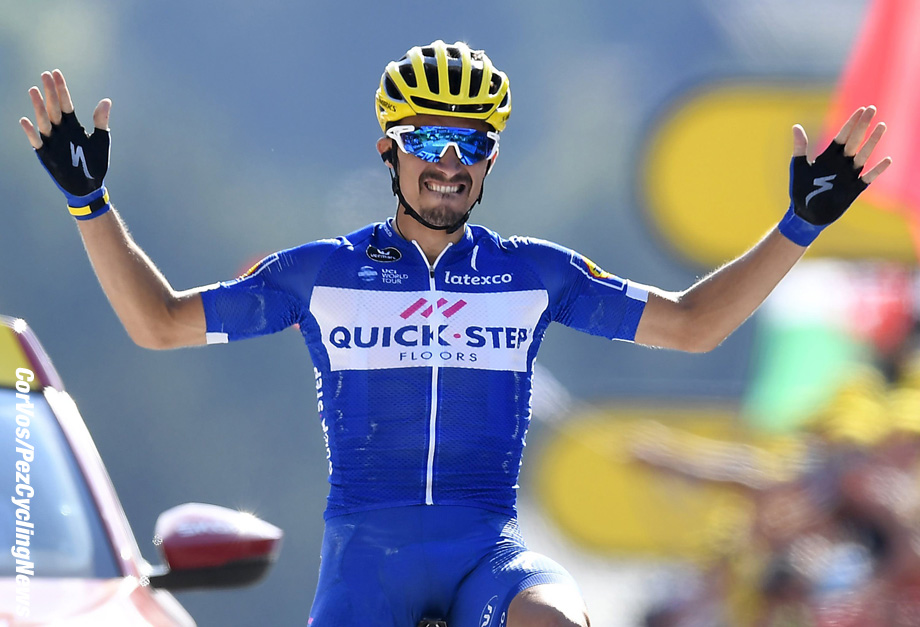 4th on the stage and overall leader, Greg Van Avermaet (BMC): “It was a hard day but two years ago, I also went into the breakaway in the yellow jersey so, it was super nice for me to spend the day in yellow in the mountains. I was waiting to find the right moment and when the big move went, I decided to give it a go and see how Team Sky reacted and they didn’t. I had to ride really hard to catch the breakaway but once I was there, and we directly took six to seven minutes, I knew it could be a good day for me.”