Stage Report: The stage to Pau looked perfect for the break of the day to succeed, but they were swept up with 15K to go and speed went through the roof. The battle of the fast men wound its way through the twisty streets to catapult the French sprinter Arnaud Démare (Groupama-FDJ) across the line for a welcome home win. All the top men on GC finished with the peloton, and so there was no change in the overall standings going into the super tough stage 19. 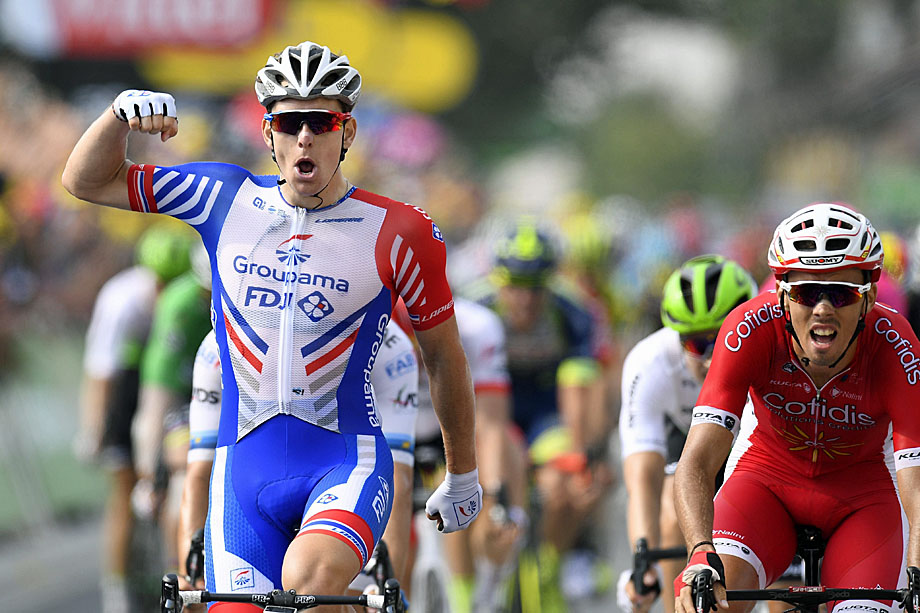 From second last on Wednesday to first on Thursday

French sprinter Arnaud Démare has struggled through the Alps and the Pyrenees, but on Thursday’s stage 18 he showed he still can do what he is best at… Sprinting. The Frenchman took the win ahead of Christophe Laporte (Cofidis) and Alexander Kristoff (UAE Team Emirates), with the green jersey of World champion, Peter Sagan (Bora-Hansgrohe) crossing the line in 8th place. His team had looked the strongest in the lead-out battle, but Sagan was obviously suffering from his big crash on Wednesday. 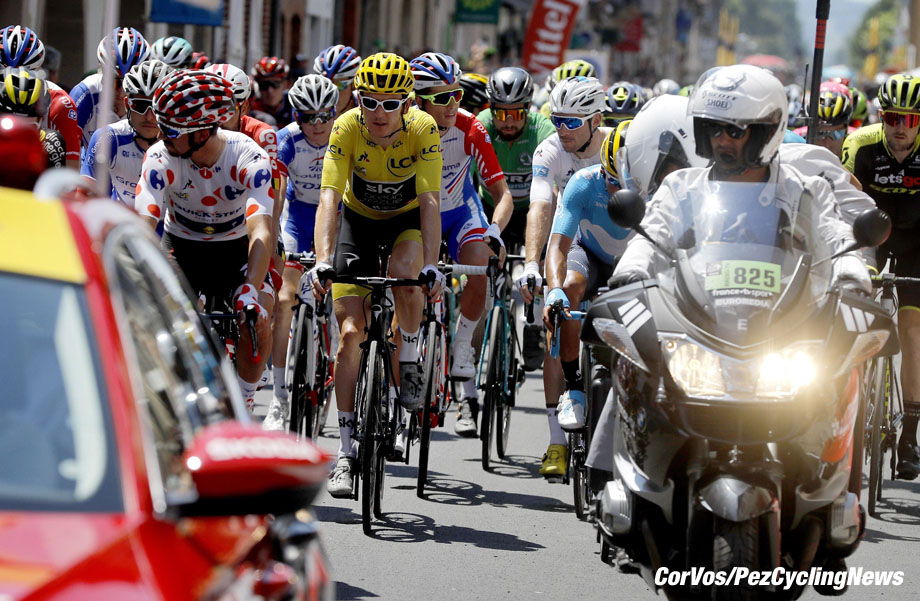 Stage 18 is a transition stage of 171 kilometers from Trie-sur-Baïse to finish in Pau for the 70th time since the first visit in 1930. The corse has two Cat 4 climbs, the first coming after 53.5 kilometers, the Côte de Madiran (1.2km at 7%) and the second with 21.5km to go, the Côte d’Anos (2.1km at 4.6%). There is also the intermediate sprint in Aurensan after 73.5 kilometers, but Peter Sagan has as good as won the green jersey. 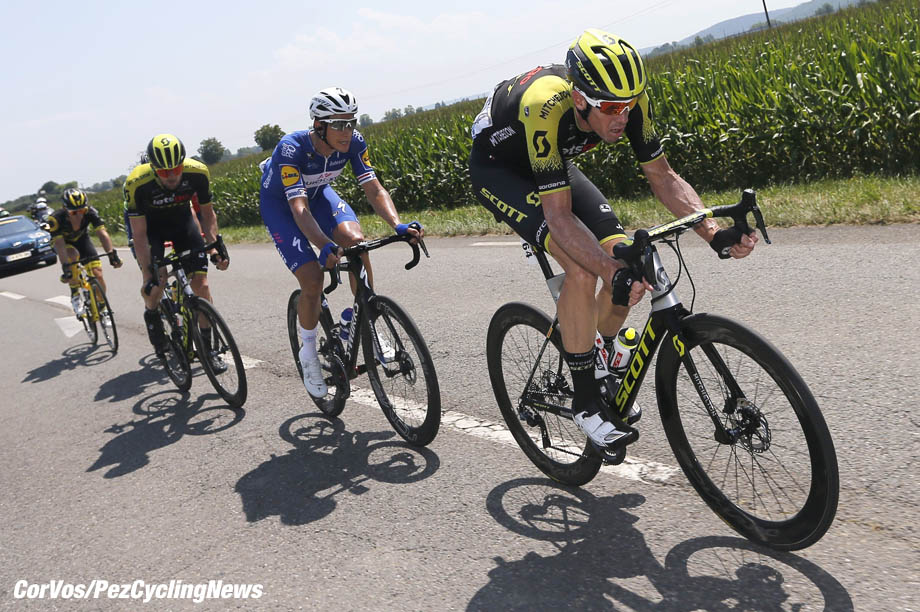 Haymen leads the break of the day 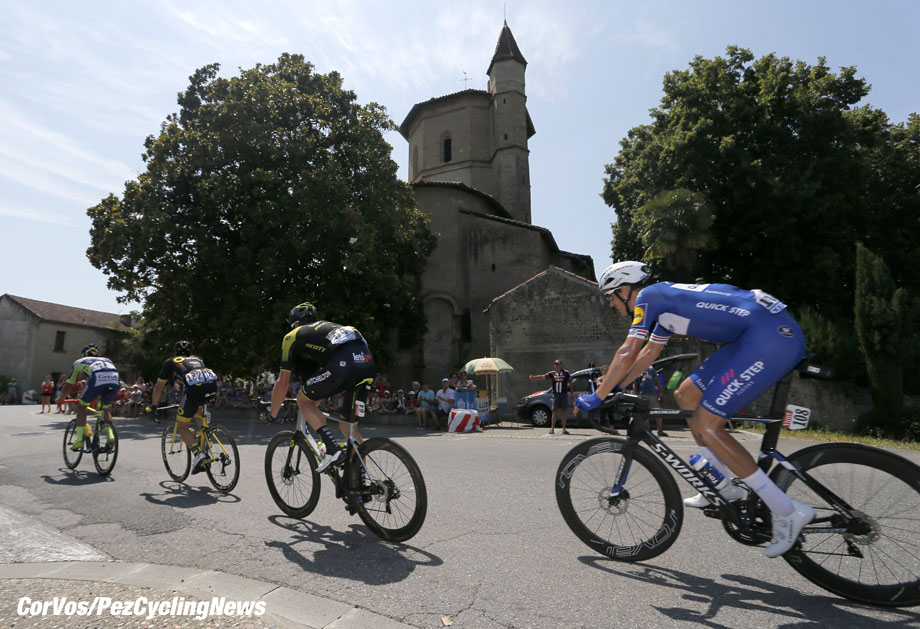 Lots of castles in these parts 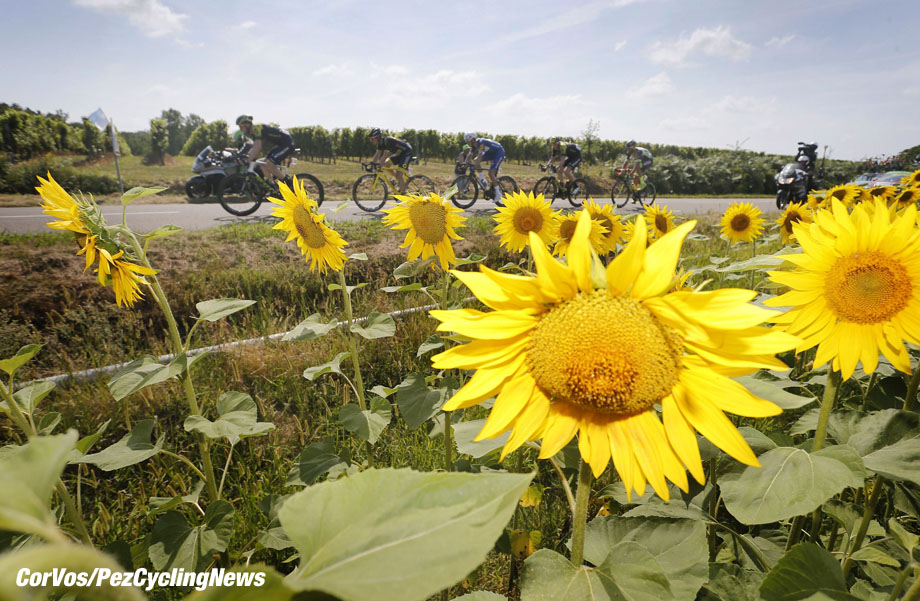 Five riders went clear after 1.5km: Niki Tersptra (Quick-Step Floors), Guillaume van Keirsbulck (Wanty-Groupe Gobert), Luke Durbridge and Matthew Hayman (Mitchelton-Scott) and Thomas Boudat (Direct Energie). After a fast and furious 25 kilometers, the peloton stopped chasing and sat back for an easier ride as they had covered 48.8km in the first hour. 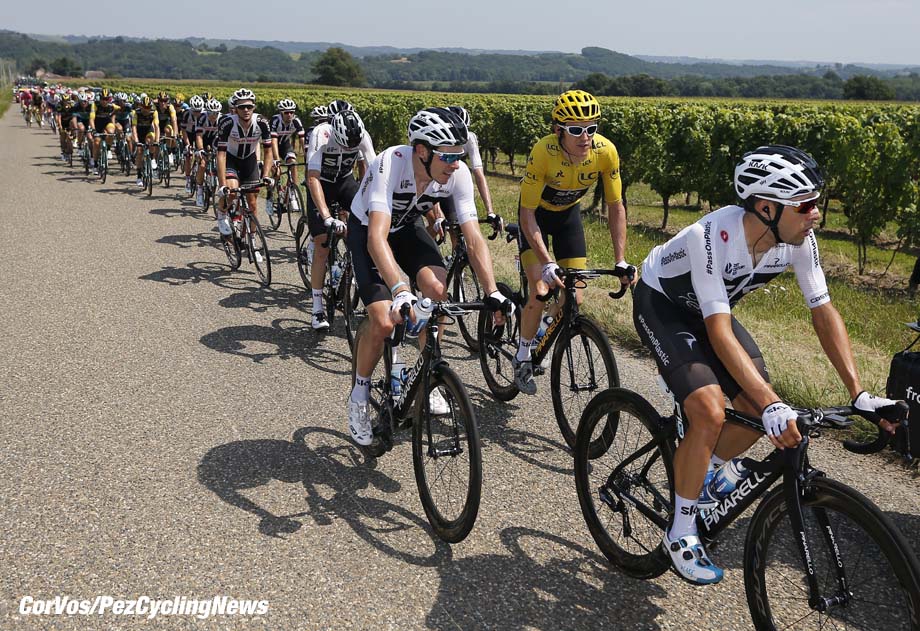 After the first hour the peloton eased up 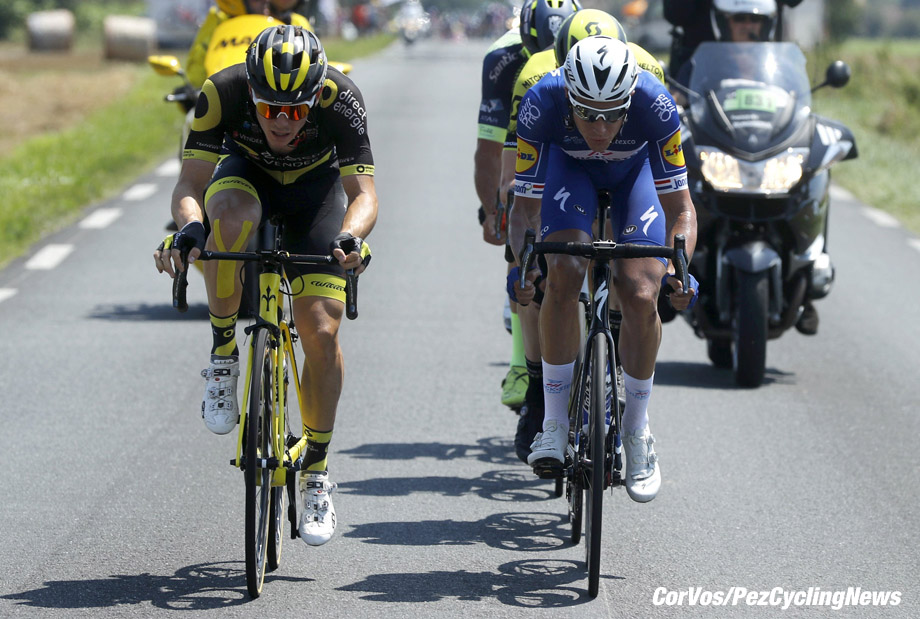 The escape didn’t gain much time

UAE Emirates, Groupama-FDJ and Bora-Hansgrohe kept the distance between the leading five and the peloton around 1:30 until Michael Gogl and Jasper Stuyven (Trek-Segafredo) and Sep Vanmarcke (Education First-Drapac) attacked from the peloton after 65 kilometers. At this point thete was a pile-up in the peloton with Nairo Quintana (Movistar) coming off worst with cuts to his left arm and shoulder. Things calmed down as the sprinter team took control to hold the leaders at 2:21 around the 80 kilometer mark. 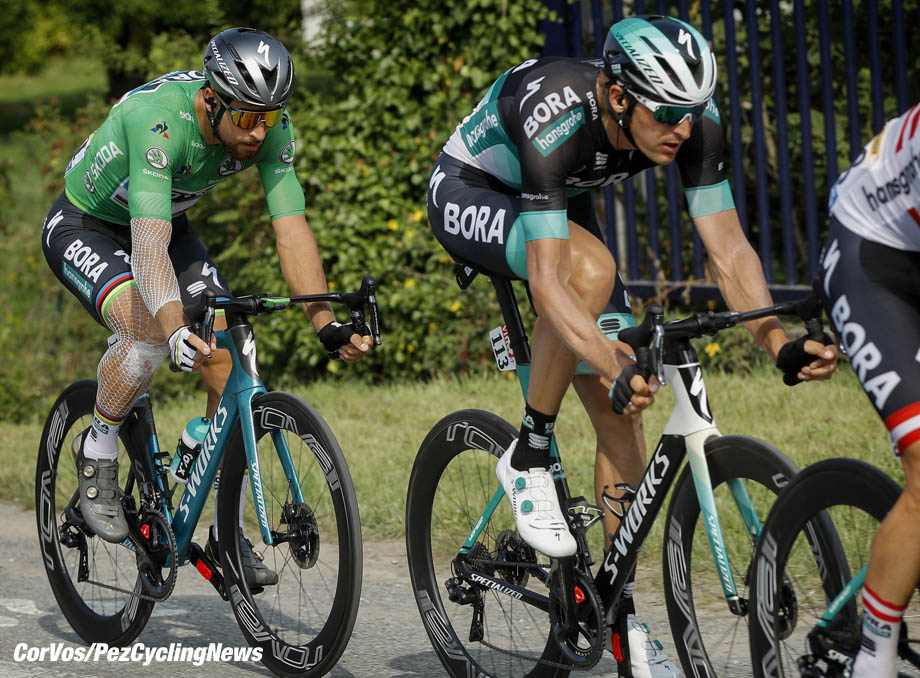 Bora-Hansgrohe were strong in the finalé, but Peter Sagan was not 100%

Rory Sutherland and Darwin Atapuma (UAE Team Emirates), Tobias Ludvigsson (Groupama-FDJ) and Anthony Perez (Cofidis) drove hard on the front of the peloton. The leaders advantage was down to 30 seconds with 22km to go. They were caught just after the climb of the Côte d’Anos with 16.5 kilometers to go to the finish line in Pau. Groupama-FDJ were the strongest team at first, but then Bora-Hansgrohe took over in the last 10km and pushed the speed up causing everyone to suffer on the run-in. It was looking like another stage for Peter Sagan. 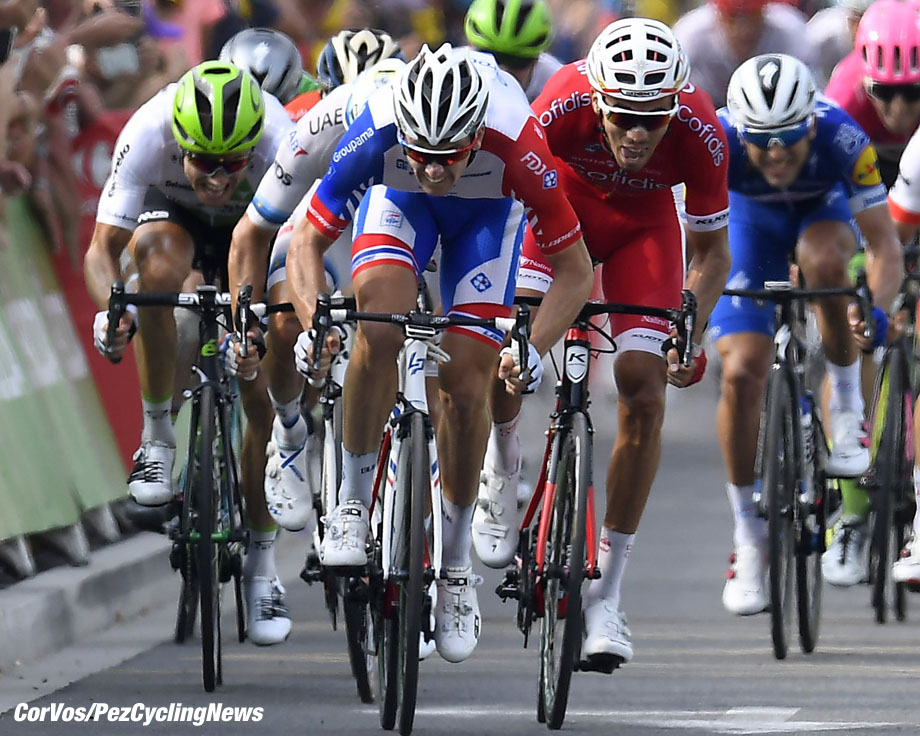 Arnaud Démare was in the perfect position

Jacopo Guarnieri put his Groupama-FDJ team leader, Arnaud Démare, into an ideal position to launch his sprint 250 meters from the line. The Frenchman held off a fast moving Christophe Laporte (Cofidis) for the win with Alexander Kristoff (UAE Team Emirates) in third. This is the first time French sprinters have taken the first two places in a Tour sprint stage since Jacques Esclassan came in ahead of Yvon Bertin in Saint-Amand-les-Eaux 40 years ago. Belgians Freddy Maertens and Walter Planckaert were 3rd and 4th. Despite a difficult time in the Pyrenees and his second last place on stage 17, Démare confirmed his win in Vittel last year. 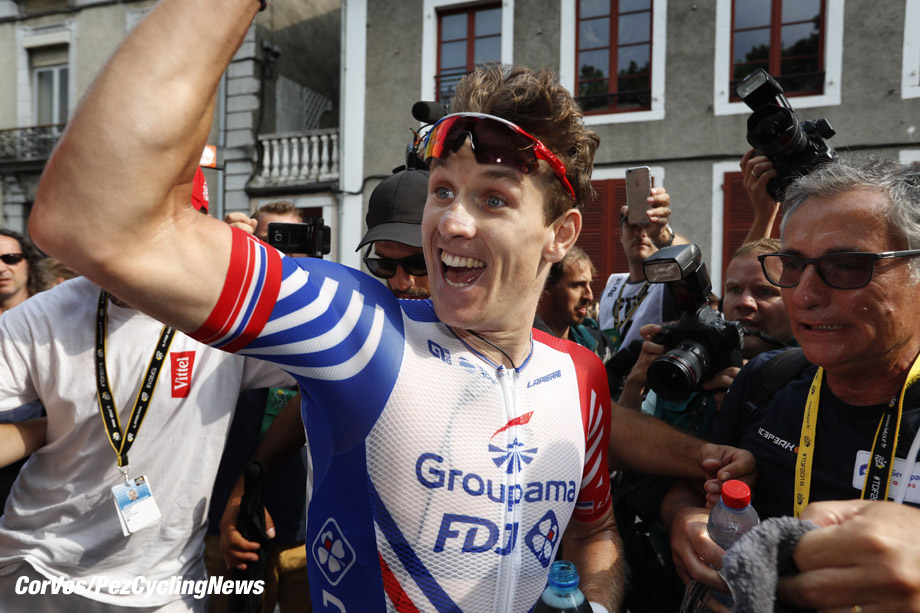 A happy stage 18 winner, Arnaud Démare (Groupama-FDJ), spoke on TV after the finish: “I’ve been through some difficult moments, but I really wanted to make it to the final sprints and play my cards. I always believed in myself and my chances of winning in this Tour. Winning today, before the final chance on the Champs Elysees is great for my motivation. This is for my wife, my family and my friends. It was a fast sprint after a fast stage. I was well-placed thanks to Jacopo Guarnieri and believed I could win. The team was perfect in the way they set me up. People who know me, know how hard I trained for the Tour de France and this goal. That’s why I’m so happy today.” 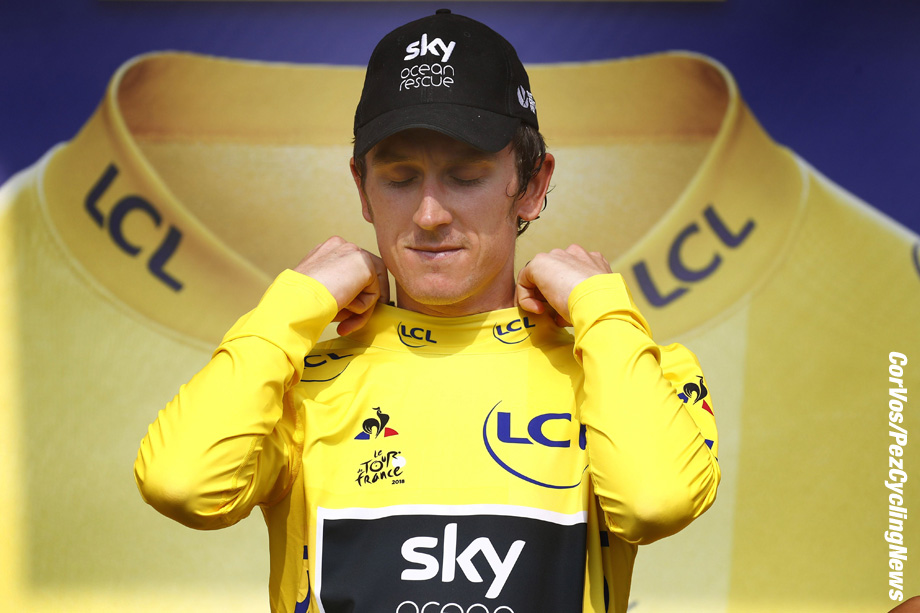 Overall leader, Geraint Thomas (Sky): “It was a solid start and it definitely wasn’t an easy stage. We were on the pedals all day and it was a hot day which made it tough. It was a really fast final too which was a bit stressful so I’m happy to make it through. I try to just think about it day by day. But obviously there’s one more big (mountain) day. It’s the last road stage and we’re expecting a lot of attacks. There’s a lot of climbing and it’s going to be a hard day. We’ve ridden really well as a team so far so we’ll look to keep that going. We’re expecting the worst really – guys trying to go in the early break and attacks maybe on the Tourmalet as well as the final climb and descent. The boys will go all in. We just need to be vigilant, stay on our toes and keep doing what we’ve been doing.”