Stage Report: Four top time trialists fighting over the 2018 Tour de France final podium, all within two and a half minutes of the overall prize. Thomas, Dumoulin, Roglic and Froome had it all to play for and the battle of truth went to the line – Dumoulin stage – Froome podium and the Tour’18 for Geraint Thomas. 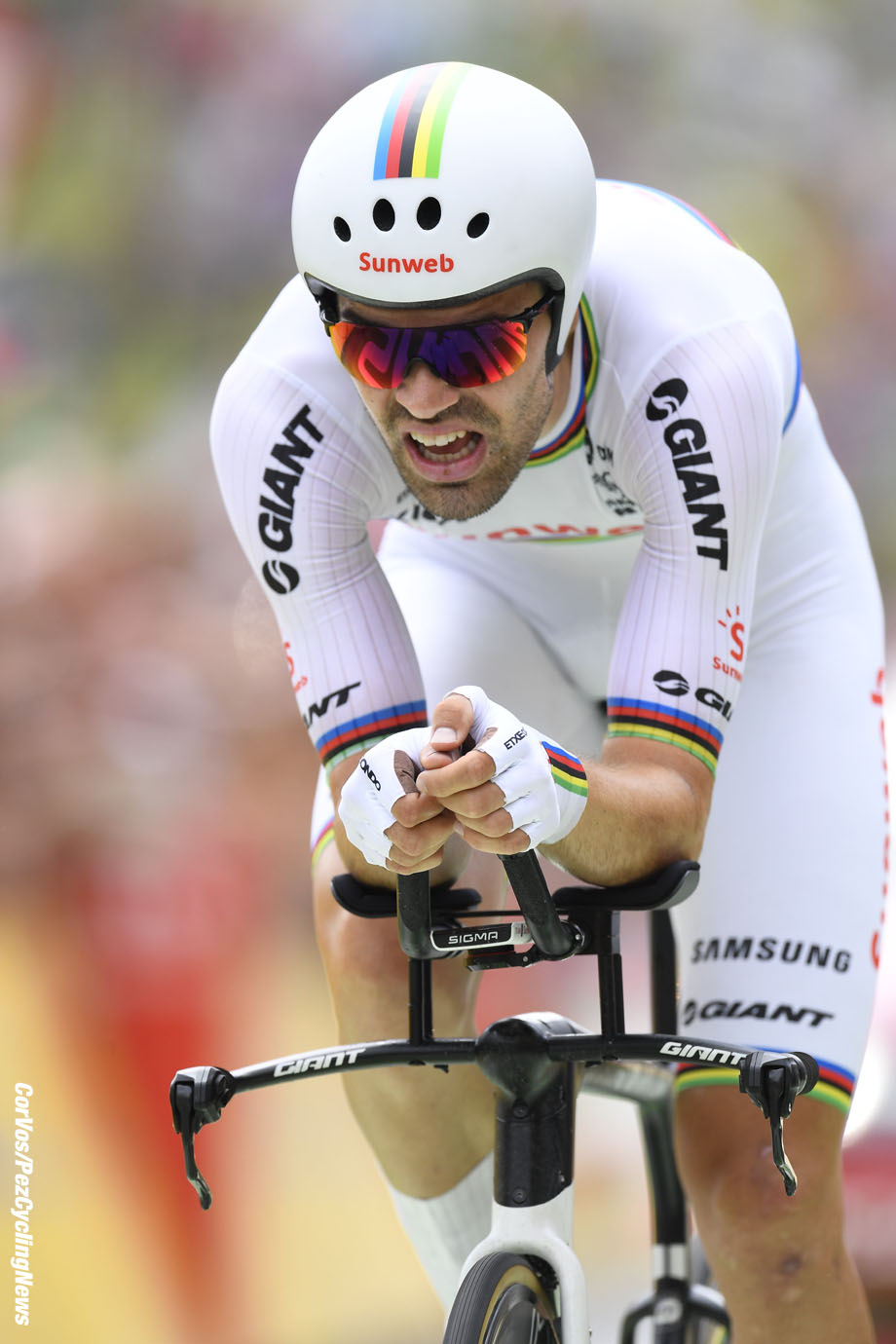 The Netherlands finest, Tom Dumoulin (Sunweb) takes the stage – a joy to behold, the winner on a parcours which didn’t really suit him; cementing his second overall spot. 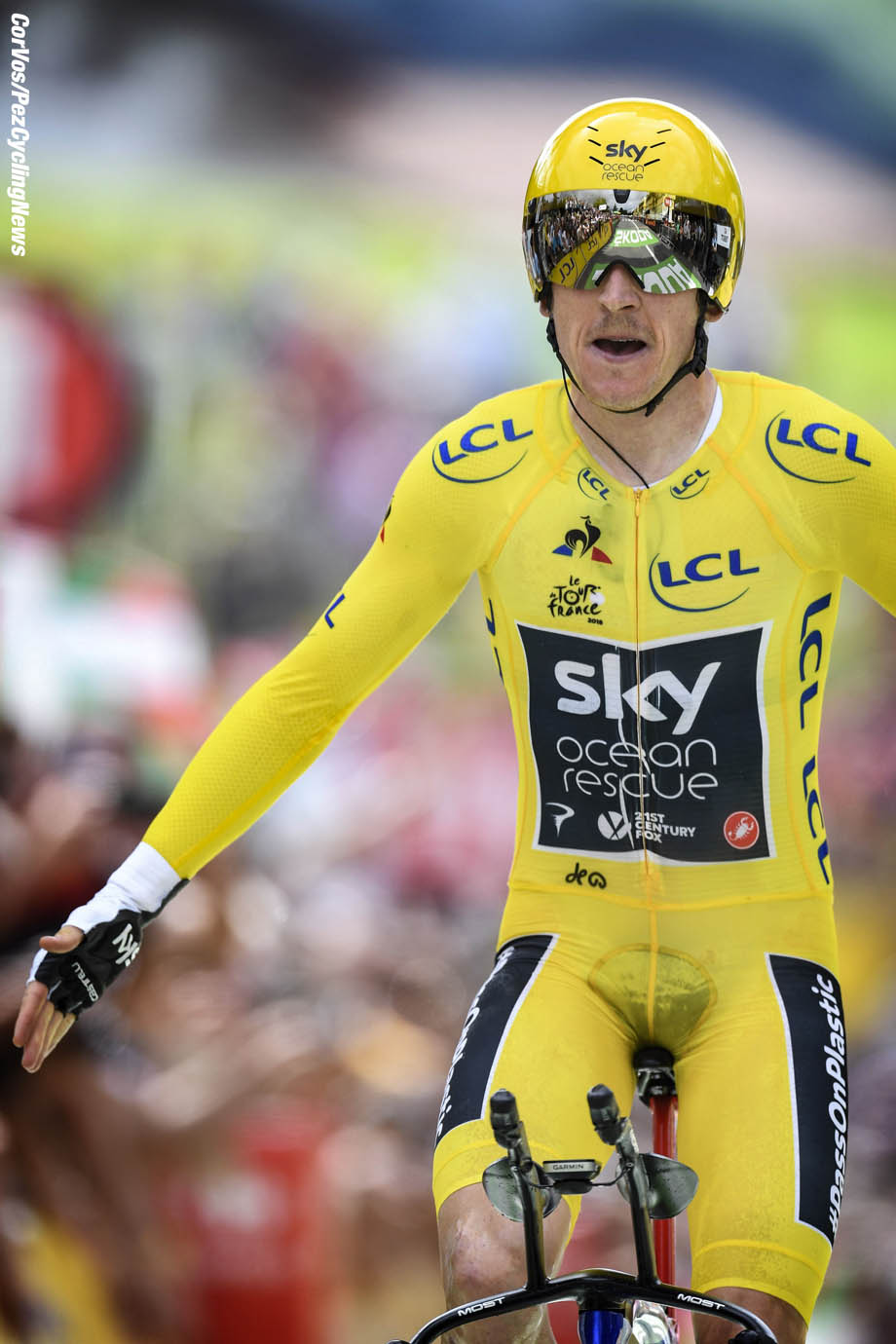 But the biggest news is that the maillot jaune is heading for the Land of his Fathers, the Valleys and the best steam coal there is as Sky’s Geraint Thomas finishes third on the stage and seals Le Tour 2018. And whilst it may not have been pretty, Chris Froome (GB) will join Sky team mate Thomas on the podium as Primoz Roglic (LottoNL-Jumbo & Slovenia) paid the price for yesterday’s heroics and dropped off the podium to fourth spot. 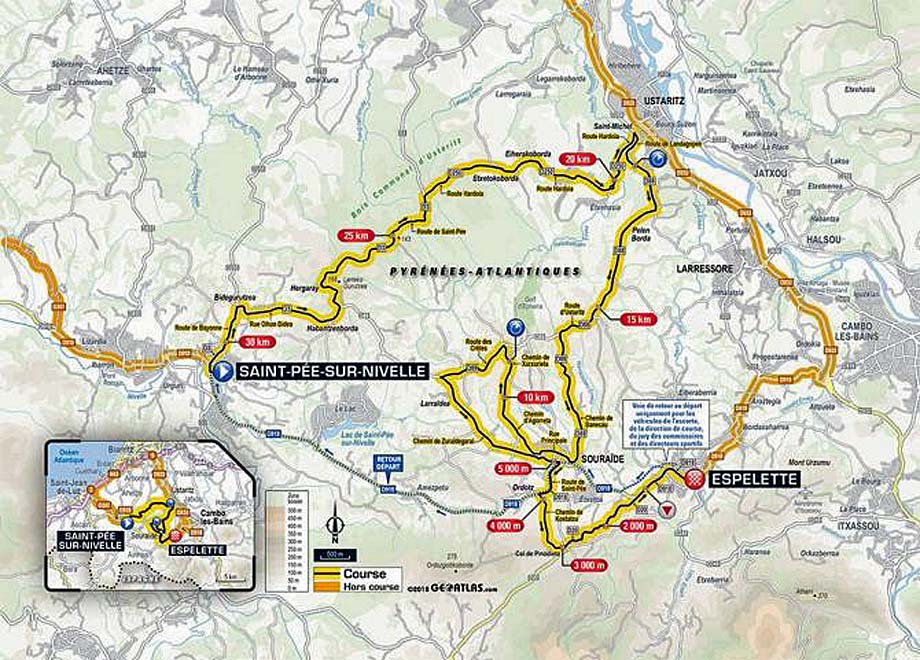 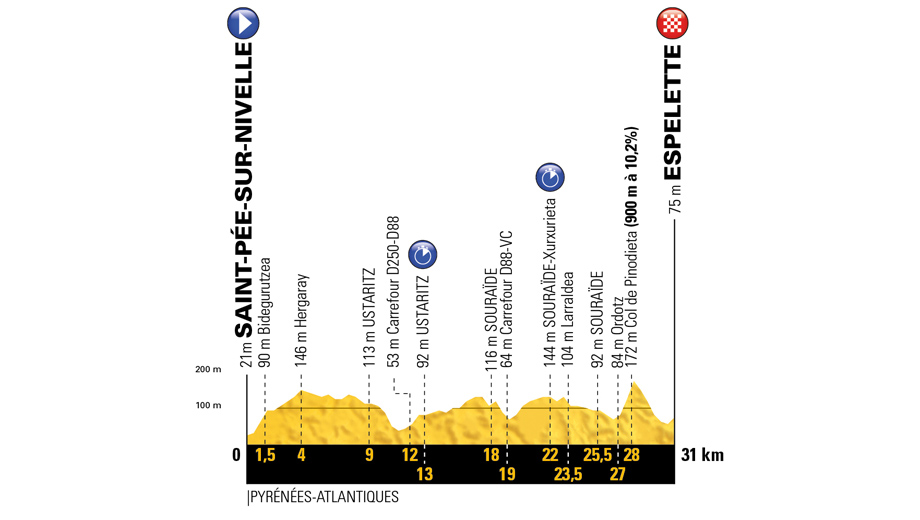 The final chrono; rolling and technical over 31 Pyrenean kilometers and despite all the work he’s done in the service of team leader Geraint Thomas it was Sky’s former Polish TT and World Road Race Champion, Michal Kwiatkowski doing the ‘full gas chrono path finder’ thing for his team leader – and taking the lead with 41:42 ahead of specialists like Stefan Kung (BMC & Switzerland), Michael Hepburn (Mitchelton-Scott & Australia) and Jonathan Castroviejo (Sky & Spain). 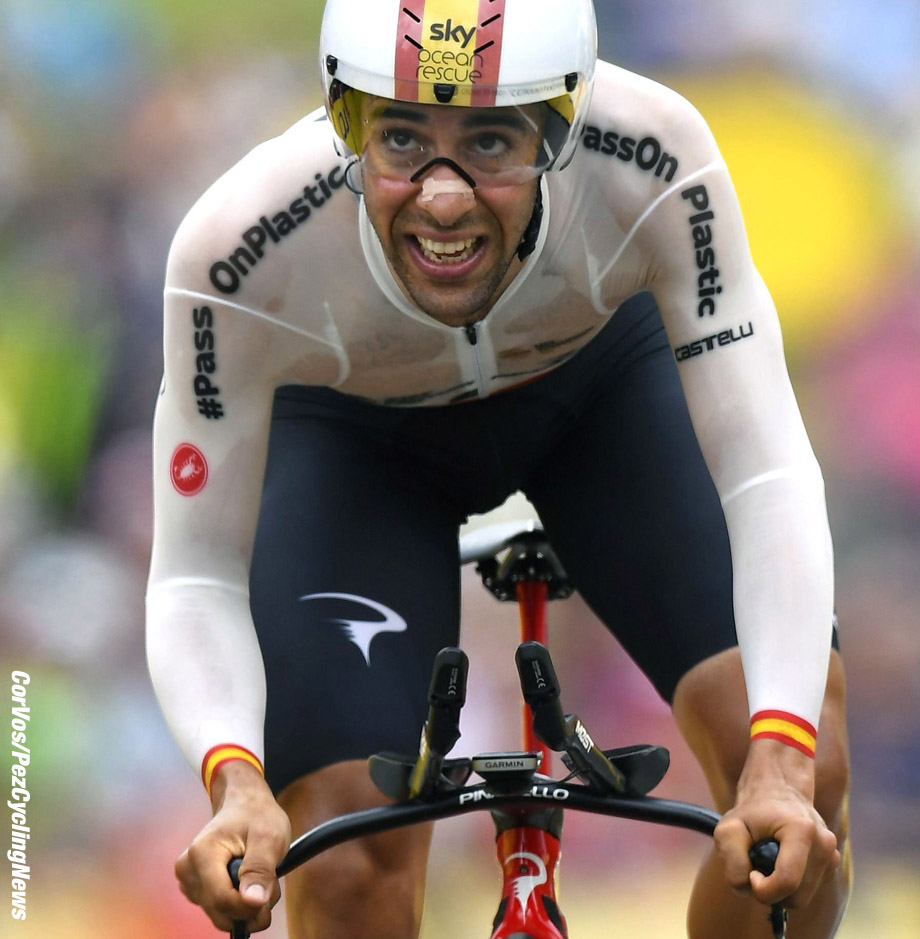 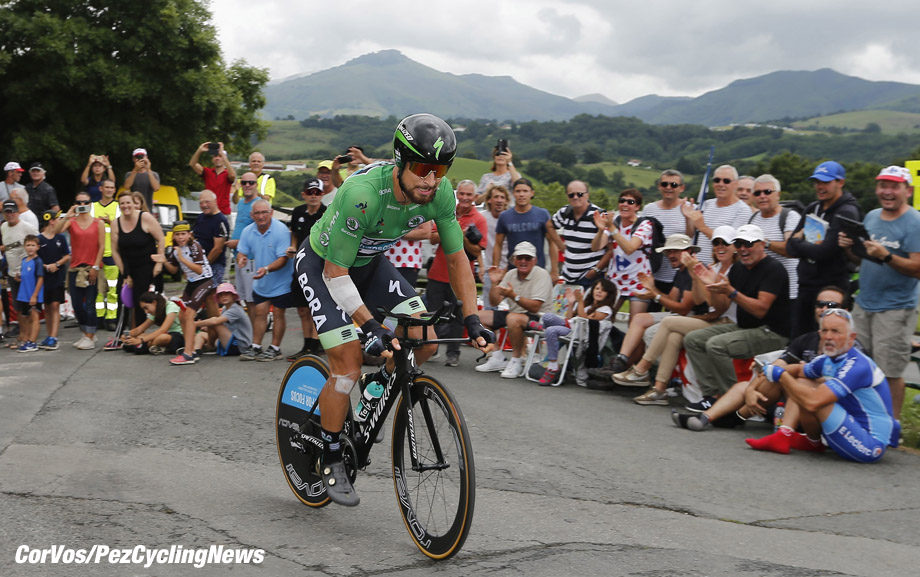 But it’s more of a parcours for the roadman then the chronomen – no ‘boulevard blast’ this one. Former Peugeot professional, Scotland’s Billy Bilsland always says; ‘the race is the last hour,’ – today’s race is about the last eight, beyond that the gaps are too big to be bridgeable – but among those last eight, Roglic could go second, Froome could get back on the podium and Landa and Bardet could move up. 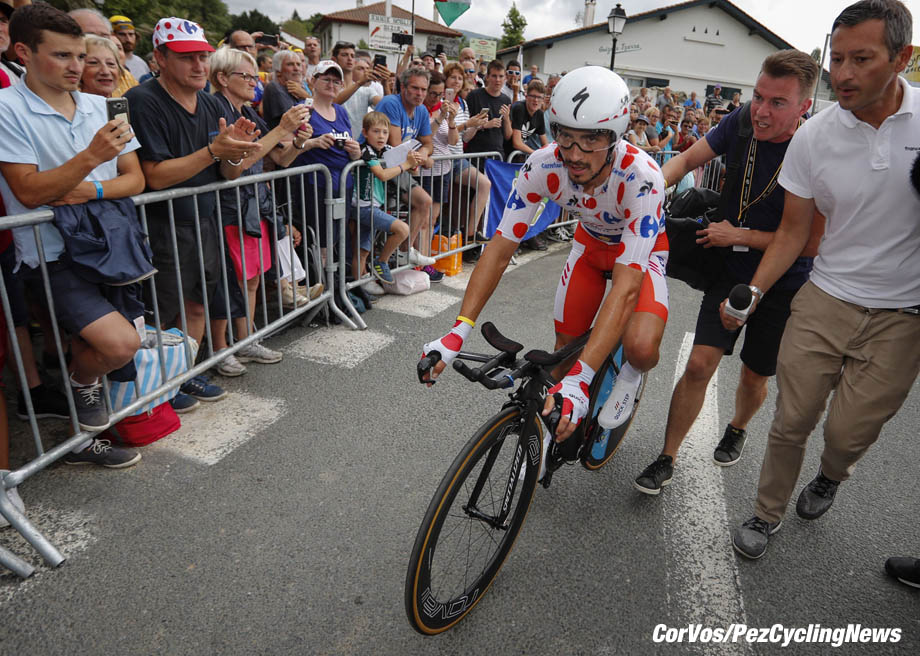 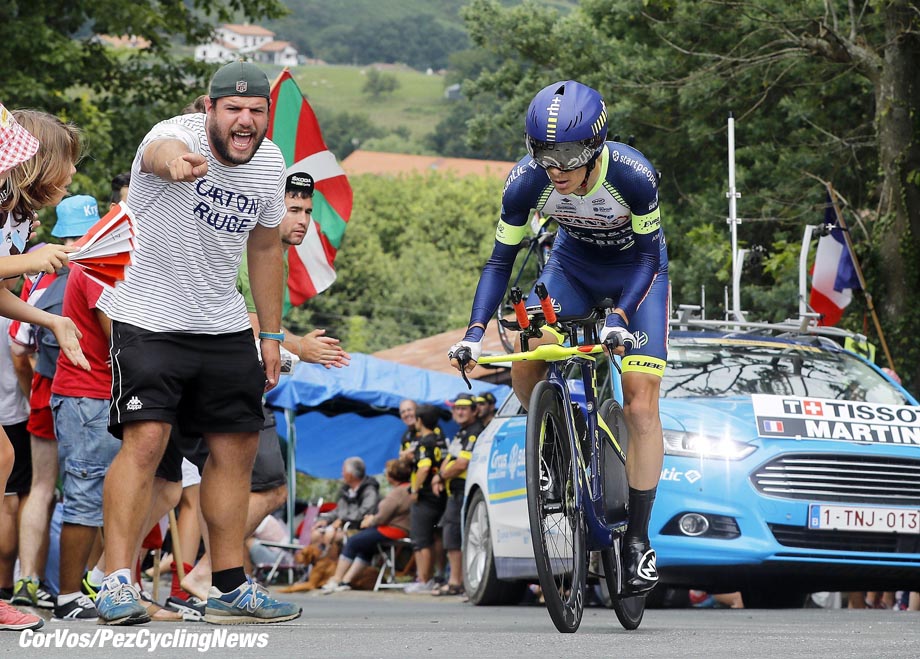 We move into the top 20 with Wanty-Groupe Gobert’s Guillaume Martin (France) rolling off the ramp. Alaphilippe ambles home, no risk, no dramas and the polka dot jersey secure. Top 15 now as Quintana (Movistar-Colombia) rolls – Movistar cannot be happy with this Tour; they’d be looking for more than a stage win out of that wage bill. 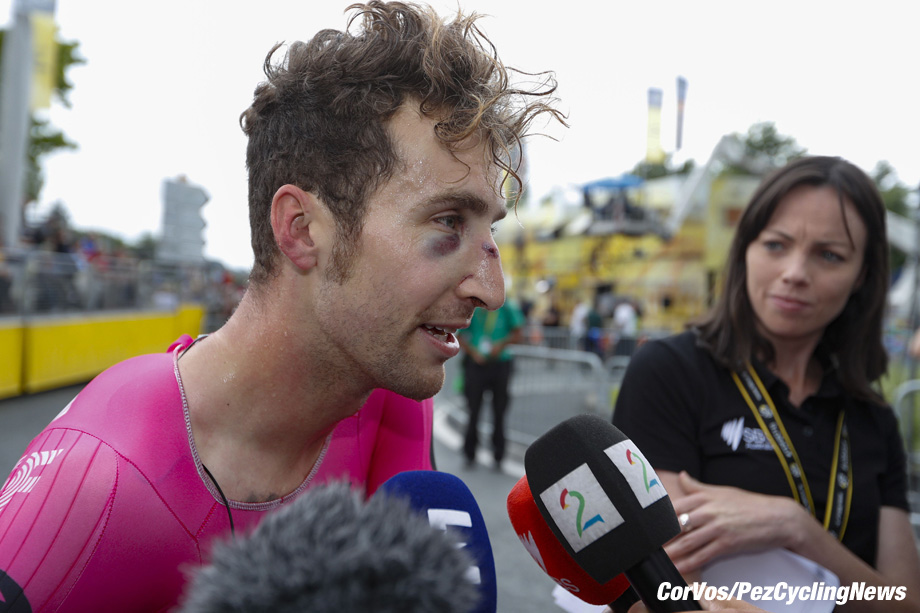 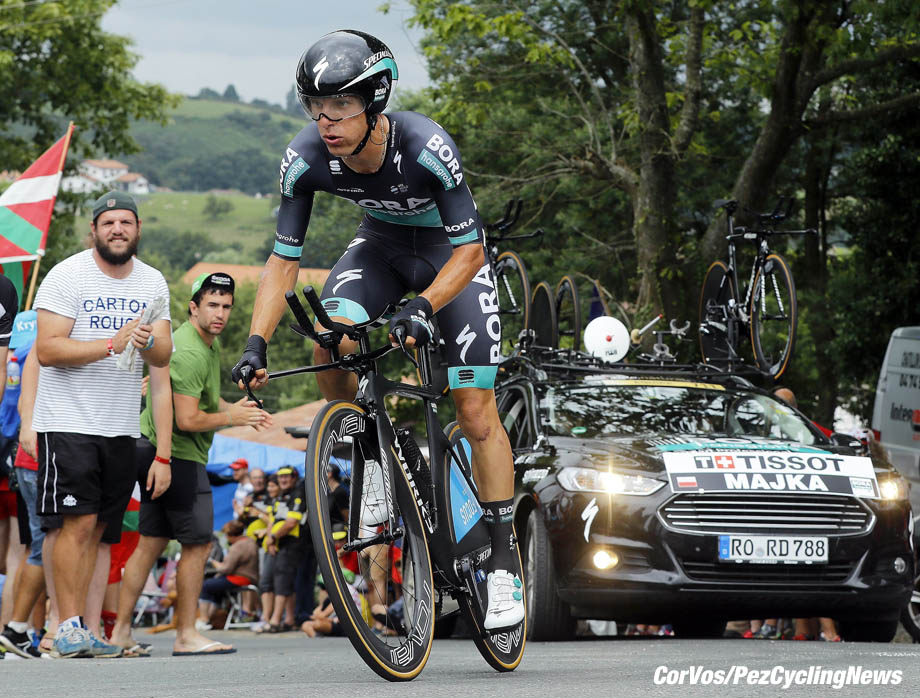 Dan Martin (UAE Team Emirates & Ireland) mow – can he hold off Bardet in seventh spot? – the Frenchman is another who won’t have fond memories of this Tour and AG2R-La Mondiale must be happy they have Pierre Latour in white to make it not too bad a Tour for them. 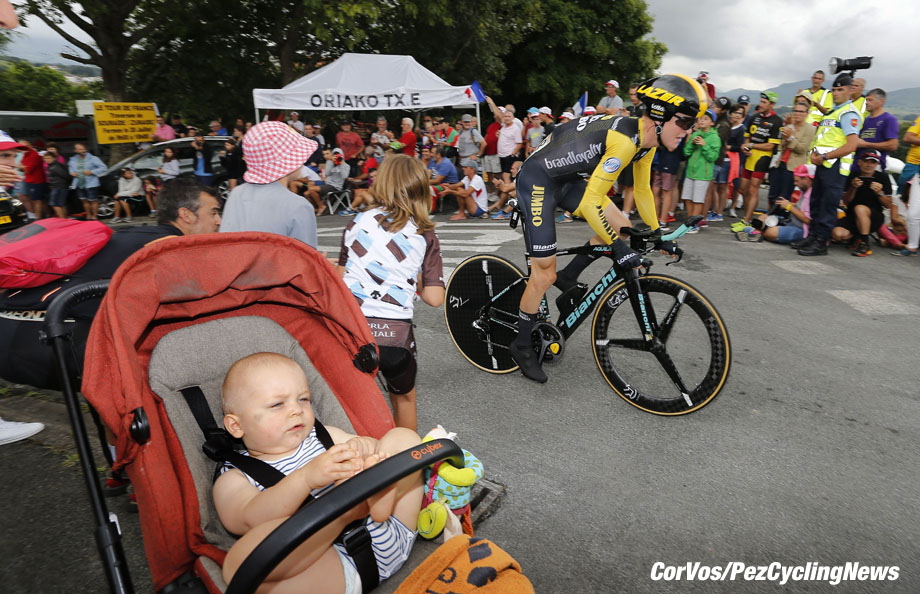 Mikel Landa (Movistar & Spain) rolls, he’s in sixth spot and just three seconds behind Kruijswijk (LottoNL-Jumbo & The Netherlands) on GC. But it’s unlikely the Basque can beat the Dutchman. Froome (Sky & GB) now, can he hop back onto the podium again? Doubtful – but he’ll try and Roglic could fall or have a mechanical. The former ski flyer goes next, he’s a top TT man. Second in the Worlds reminds us of that. 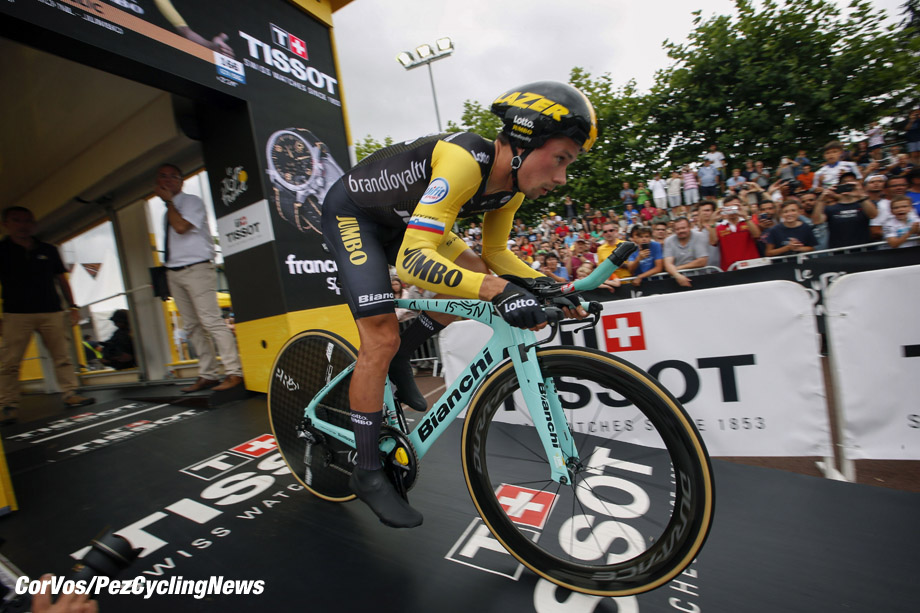 Roglic (LottoNl-Jumbo & Slovenia) goes now, if he’s at his best and Big Dumoulin has a ‘jour sans’ he could make it up to second spot on the podium. Dutchman Dumoulin, in freshly made rainbow Sunweb speedsuit (his usual one got ‘lost’!); he’s in the crouch quickly as Geraint Thomas gets ready for the most important time test of his life. The red, white and blue Sky Pinarello doesn’t go with the yellow skinsuit and helmet – but what the hell. . .

A Tour win for Wales? Is it a dream? 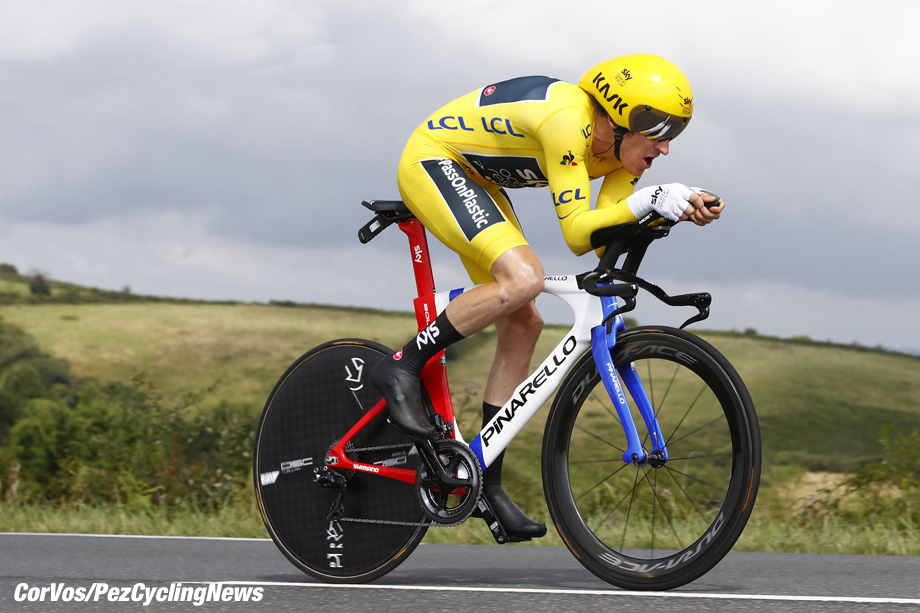 OK, they’re all out over the tar.
And Bardet is fighting as hard as a skinny man with a bad TT position can. Dumoulin is his usual poetry in motion, Roglic more compact but very powerful – Thomas is on a huge gear but looking good. Roglic is leading Froome, barring crash, mechanical or major Froome pace lift it’s a canine-free podium. Jungels (Quick-Step Floors & Luxembourg) goes to at check two – but that’s academic. Bardet is posting better times than Landa and it looks like he’ll hop over Landa and into sixth. The rangy figure of Zakarin (Katusha-Alpecin & Russia) tops Jungels time at check two as we hear Froome is top at check one. 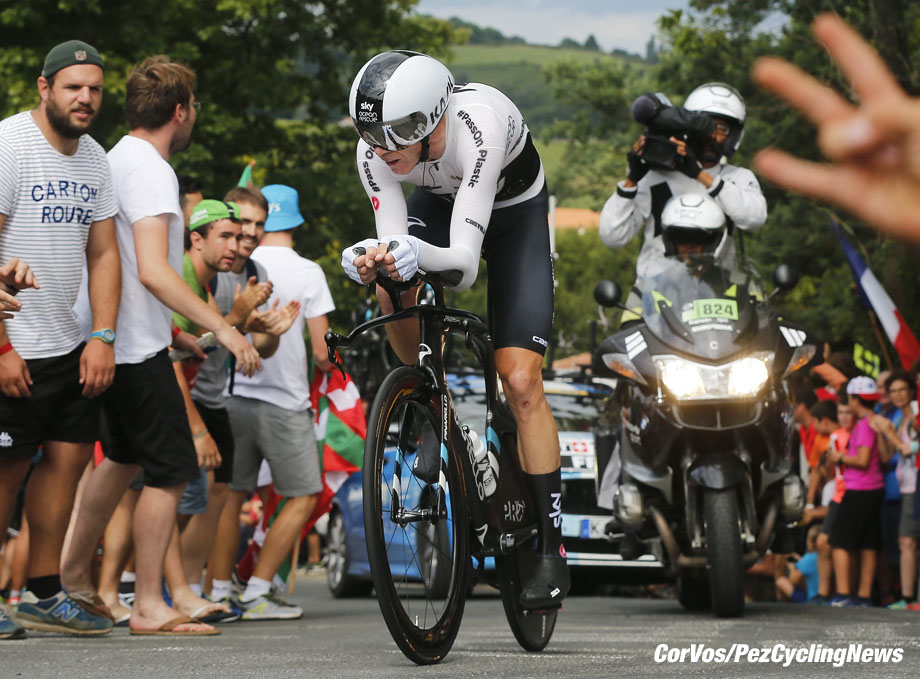 Froome is now riding very strongly and has put himself ahead of Roglic. Froome is up on Dumoulin too at check one – by two seconds. Thomas goes top at check one – that yellow jersey working it’s magic again. Latour fights home, that white jersey is safe. Thomas is far from rock solid in the saddle but the gear is big and he’s man handling it round well. 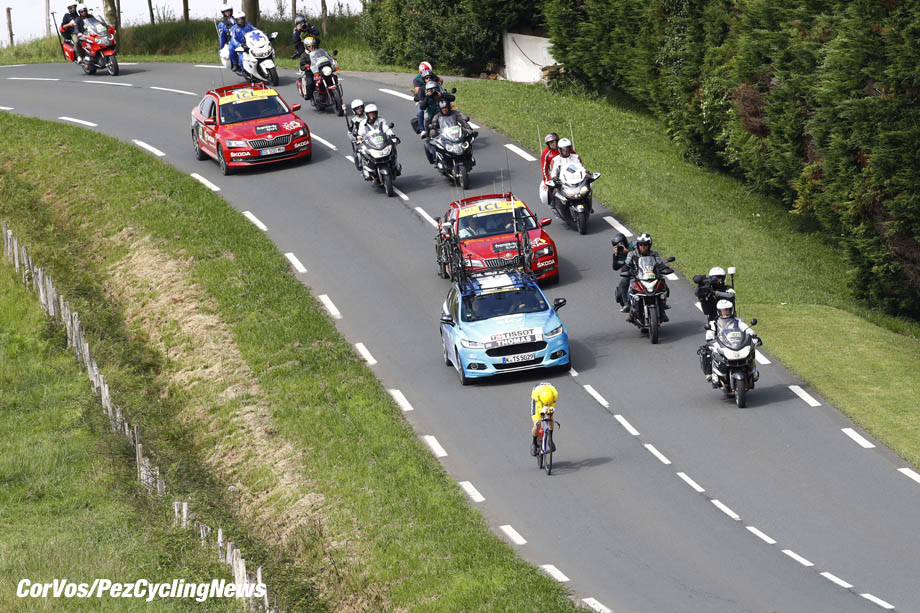 Surprisingly, Roglic continues to lose time on Froome. Rain spots on the lenses with Dumoulin looking imperious. Thomas horses it over another rise as Froome annihilates Zakarin’s time at check two. And no one has bested Kwiato’s time at the line – but that will change, soon. Roglic, check two and he’s 50 seconds back on Froome – wow!The dog is back on the podium. The French fans will be barking mad. 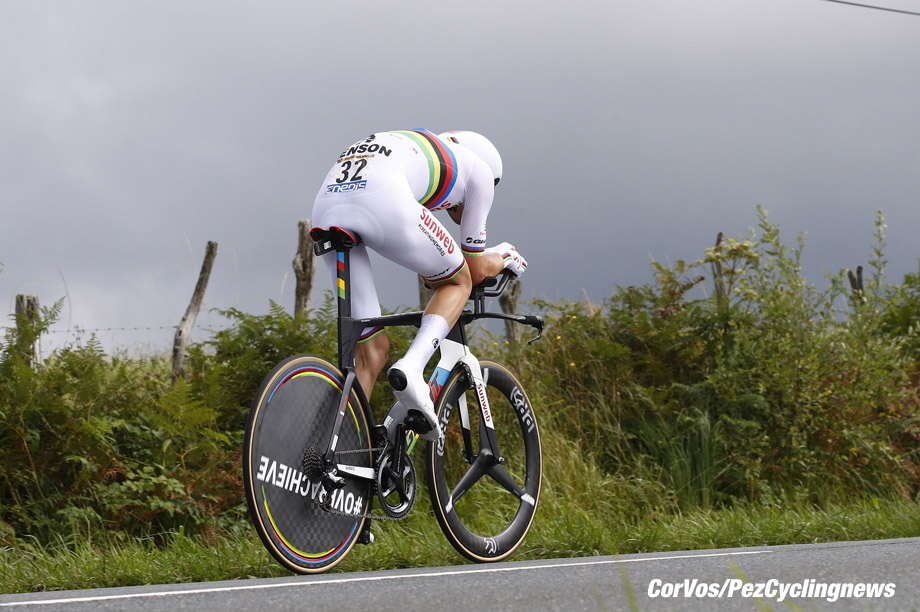 Dumoulin at check two, all square with Froome – second spot on GC looks safe for the TT champion of the world. Froome is on the ragged edge on the corners; as Thomas approaches check two – he chugs and stamps through 12 seconds up on Dumoulin and Froome. It may be stage win number three? Dan Martin grovels home but he shouldn’t slip a place. Bardet fights home, those skinny pins weren’t designed for 11 tooth sprockets. Froome spins his way up through the crowd abuse with three K to go, a most unlikely chronomen. 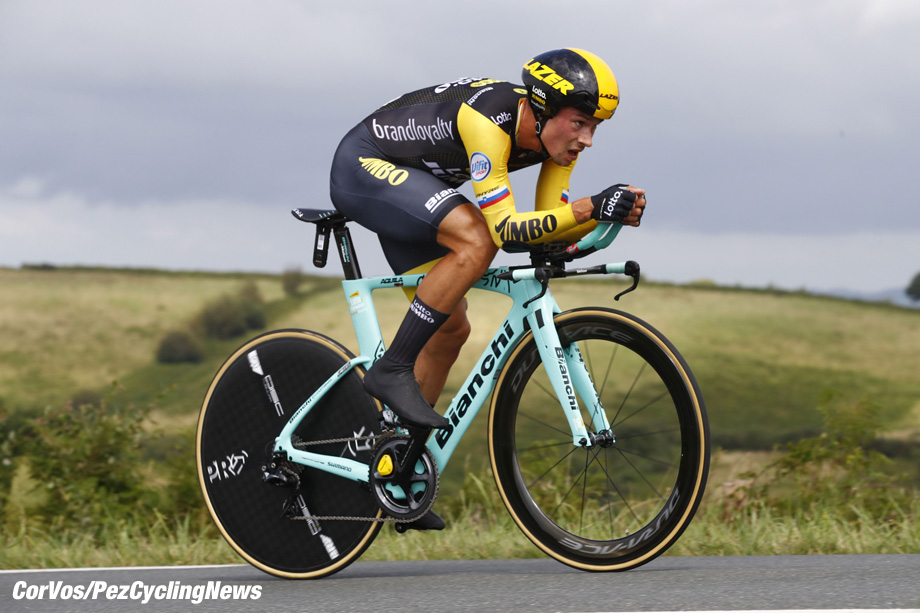 Roglic fights the same gradient, it’s not a good day for him. Dumoulin too is having to fight that grade, the closest I’ve seen the big chap to struggling. Landa come home with a weak time; Kruijswijk not far behind him. Froome now, he flies in to lead by 51 seconds, Kwiatkowski accepts his fate and slides out of the hot seat. 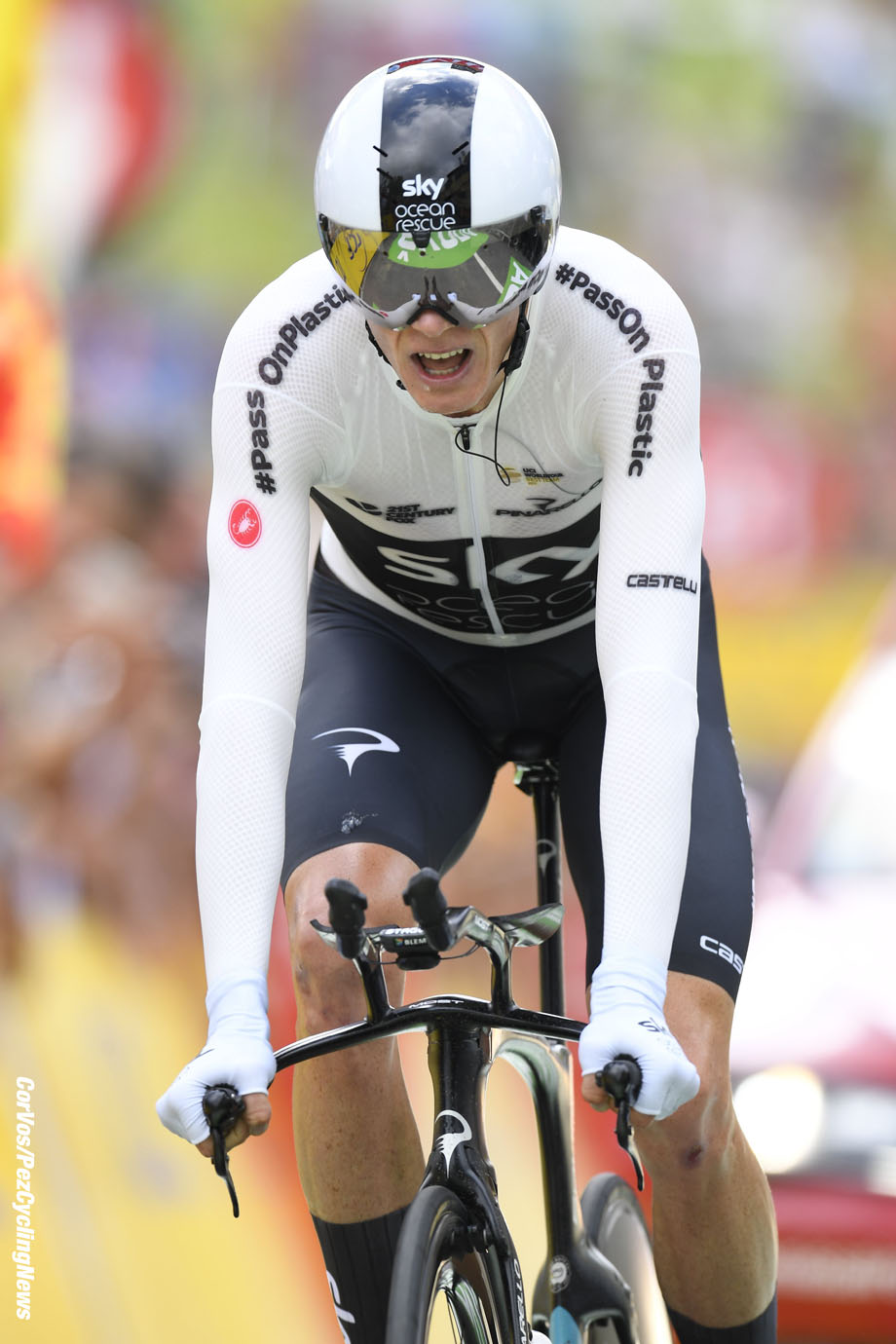 Thomas battles those closing grades, not pretty but effective. Roglic is hurtling towards the finish but it won’t be enough – Froome has nailed him by 1:14. ‘Big Tam’ D now, can he bump Froome? 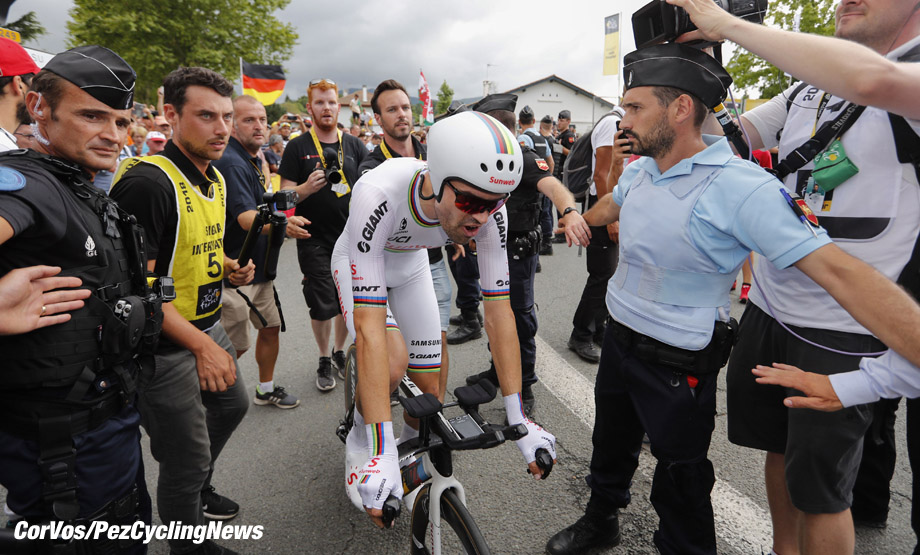 He goes TOP by one click of the second hand – Froome grimaces in the hot seat. Just Thomas to come now as the Welshman takes no chances on those final bends. Thomas’s shoulders bob, contrasting the silky smoothness of Dumoulin. He’s home and drops 14 seconds just – it’s Wales’ Tour de France. 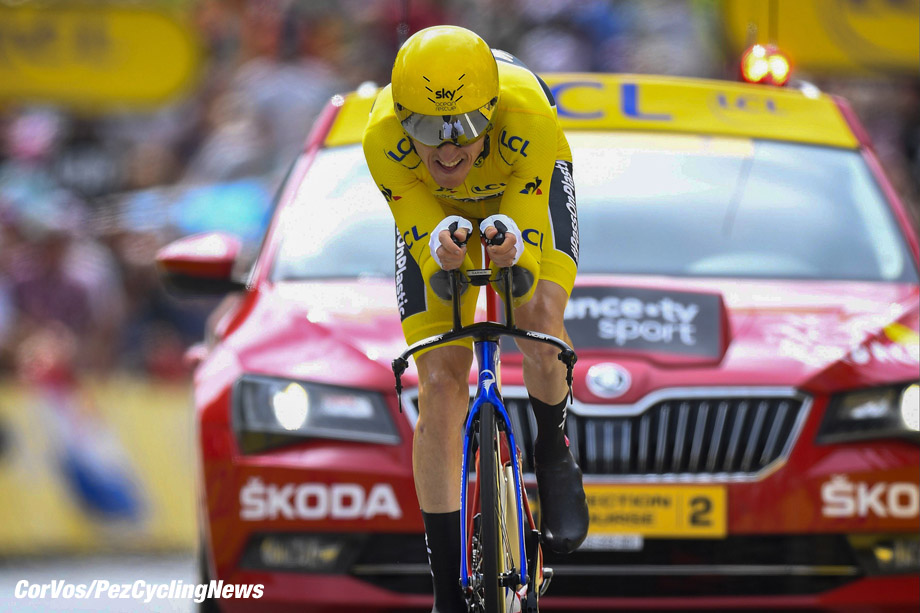