Stage Report: After a crazy day of farmer protests, tear gas and crashes, Julian Alaphilippe (Quick-Step Floors) took his second 2018 Tour de France stage win in Bagnères-de-Luchon, with the polka dot jersey on his back. Behind; there was a stalemate amongst the top riders and there was no change in the overall standings at the end of stage 16, the first in the Pyrenees. 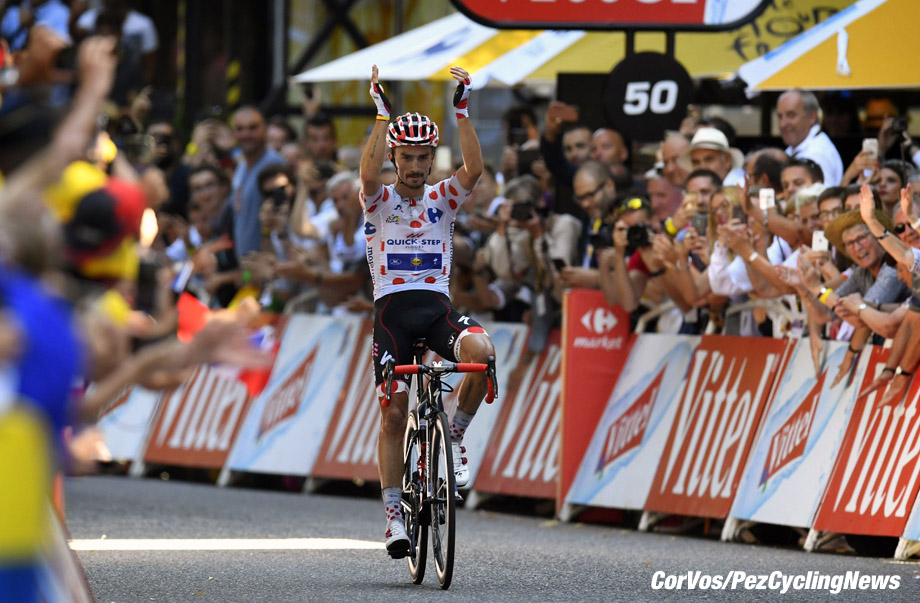 Another stage and more KOM points for Alaphilippe

There were tears on stage 16, but they were from the gas the police used on the protesting farmers on the course 30 kilometers from the start in Carcassonne. From the big break of the day, Philippe Gilbert (Quick-Step Floors) made a bold solo move on the Col de Portet-d’Aspet, but it came to a stop when he overshot a bend and summersaulted over a wall. Thankfully he climbed back to the road and continued. His teammate, Alaphilippe contained all the splits from the lead group to catch a crashed Adam Yates (Mitchelton-Scott) on the final descent and swoop to the finish line for the win. Mikel Landa (Movistar) tried to split the yellow jersey group, but to no avail and the top men finished together. 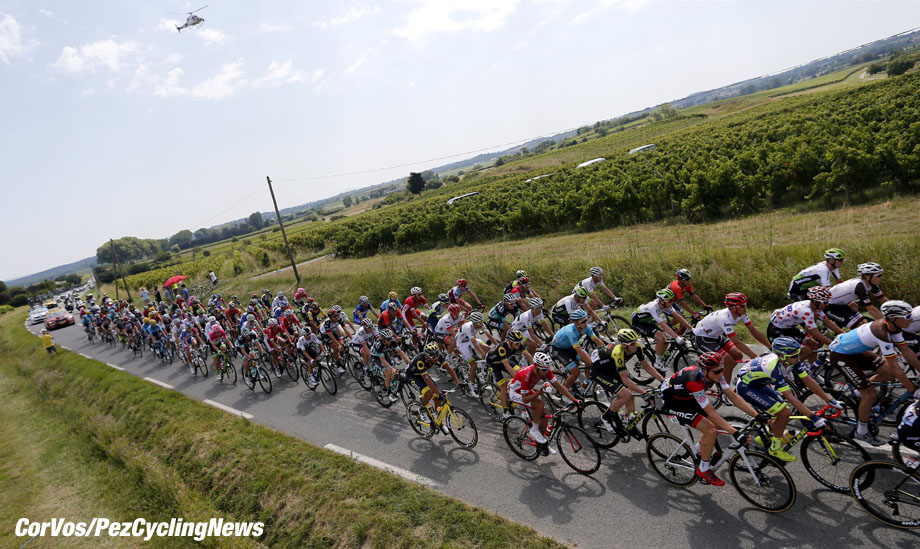 All was going well until the farmers closed the road 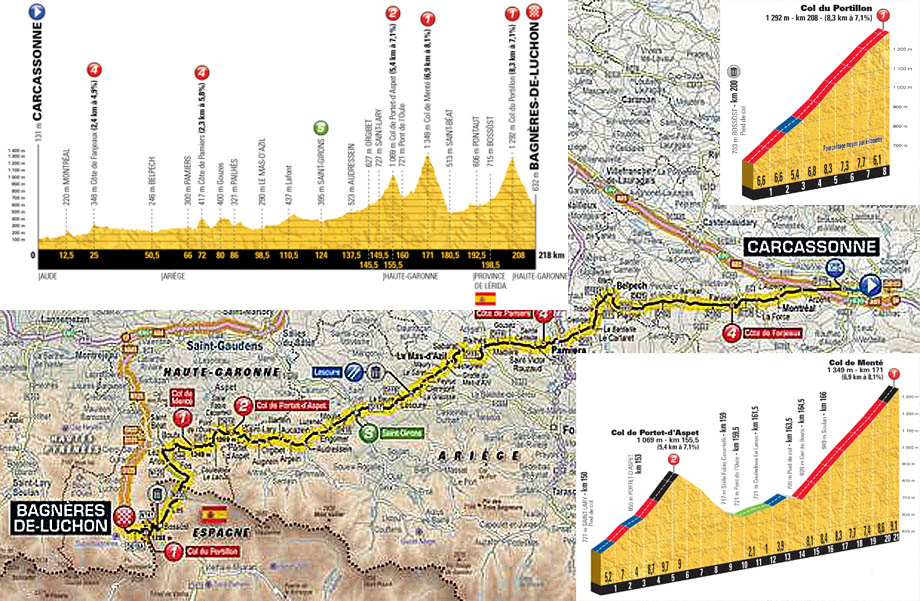 Stage 16; the first stage after the rest day can be tricky, especially with five climbs in the 218 kilometers from Carcassonne into the Pyrenees to finish in Bagnères-de-Luchon. The descent to the finish is where Chris Froome attacked in 2016 to take the overall lead, using the sat on the top tube aero position. 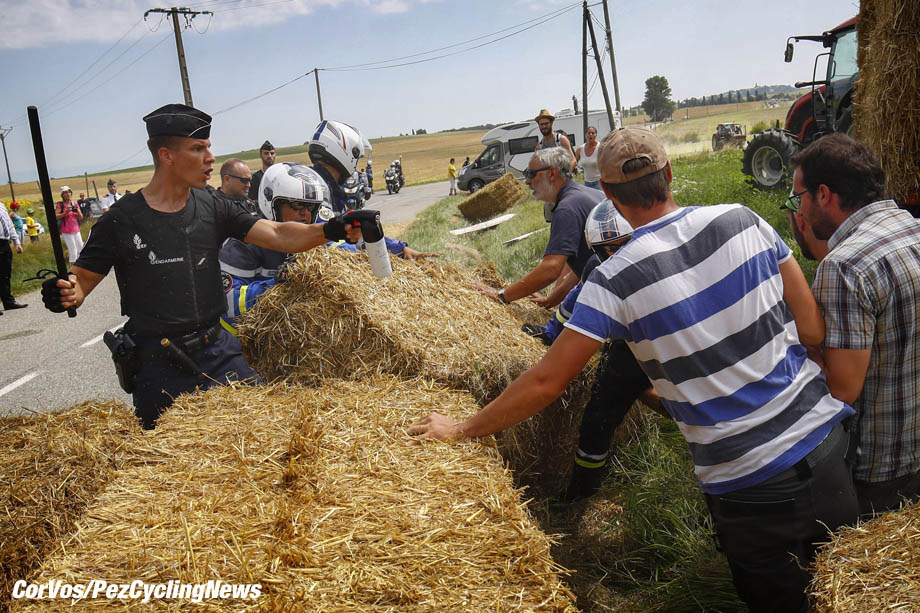 The police were kept busy

There were many unsuccessful attacks in the first part of the race. Warren Barguil (Fortuneo-Samsic) took the first KOM points on the summit of the Côte de Fanjeaux after 25 kilometers. 5K further on and the race was neutralized. 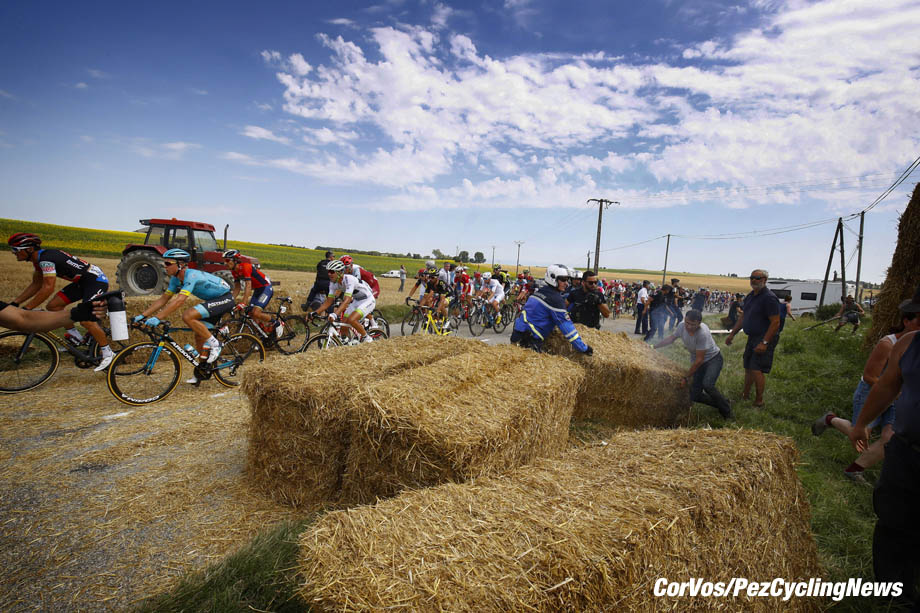 The riders did get through

30 kilometers into the stage the race was stopped as the police had to clear away hay bales that had been placed on the road by protesting farmers. The police used tear gas which affected most of the riders and so the race was halted for around 15 minutes so everyone could wash out their eyes. Apart from the eye irritation, there was no injuries due to the protest. 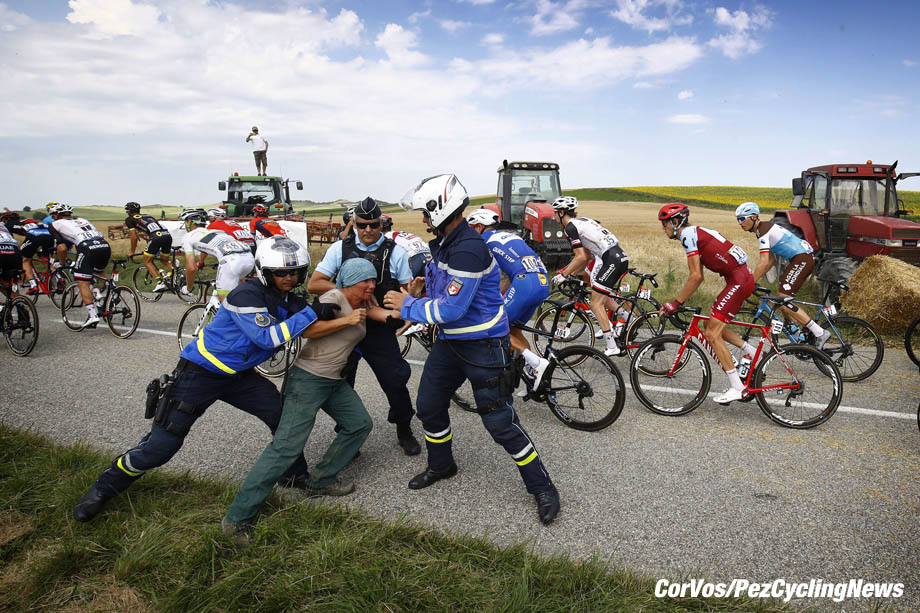 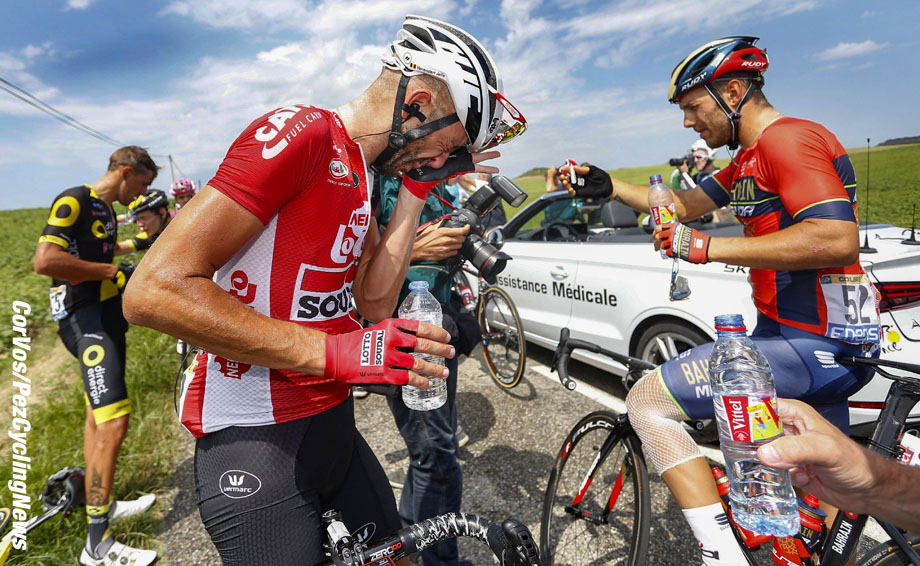 The riders seemed worse affected by the gas

Franco Pellizotti (Bahrain-Merida), Stefan Küng (BMC), Rafal Majka (Bora-Hansgrohe) and Andrea Pasqualon (Wanty-Groupe Gobert) attacked at 35 kilometers. They were reeled in after 13 kilometers. Many skirmishes took place. Julian Alaphilippe (Quick-Step Floors) took the second KOM of the Côte de Pamiers (72km). The race was still all together after 100km. 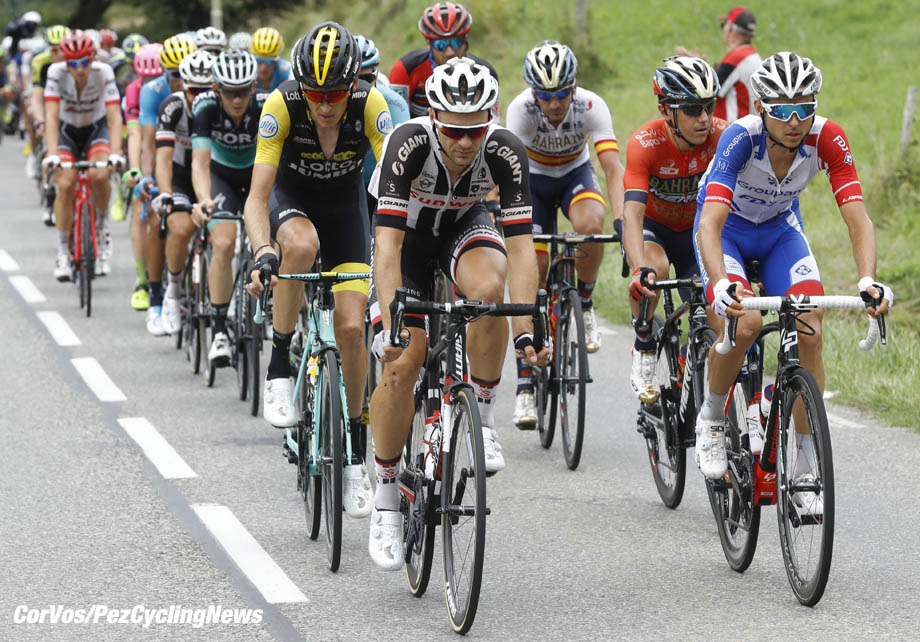 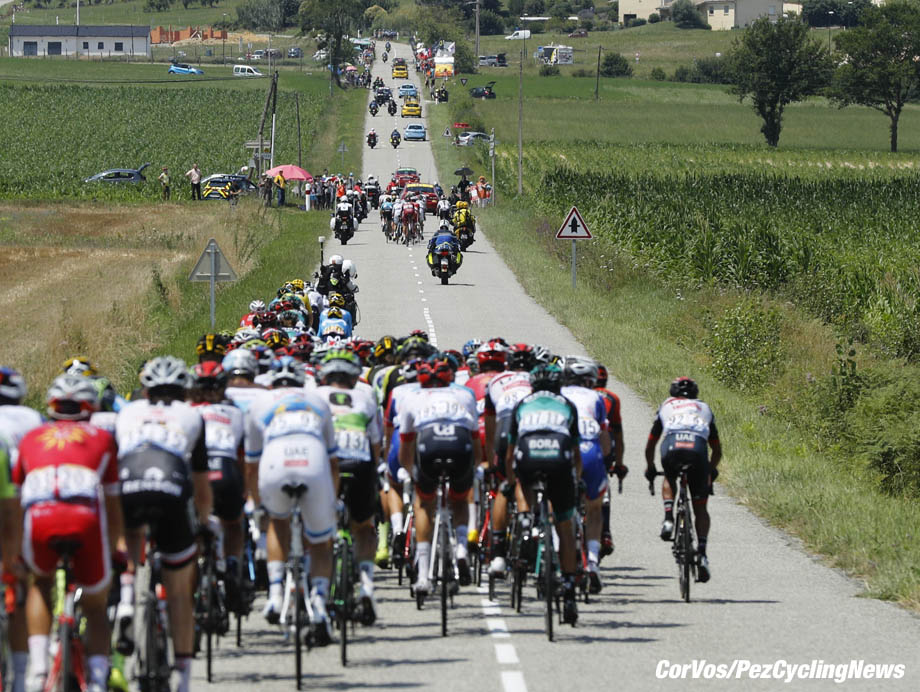 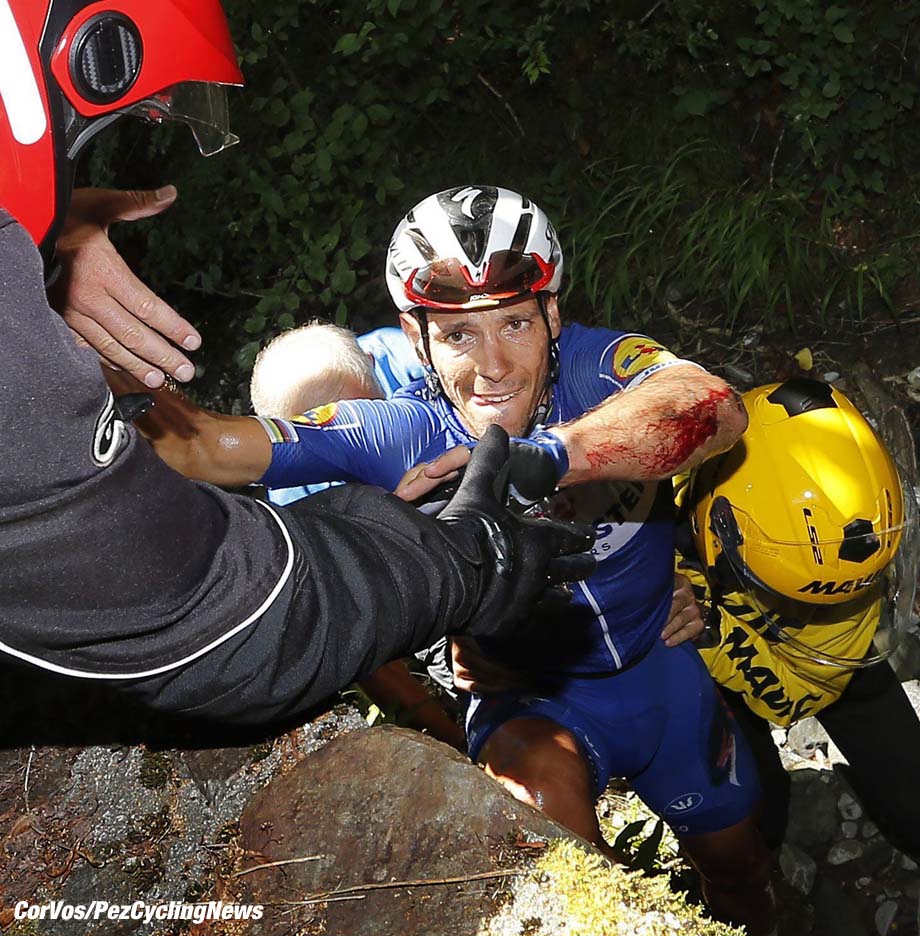 Philippe Gilbert was lucky, it could have been much, much worse

Gilbert rode away solo at the bottom of the Portet d’Aspet. He crested the Cat 2 climb in the lead with an advantage of 55 seconds over Alaphilippe and Barguil but he crashed on a tight corner and ended in a ravine. He was pulled out with cuts to his left arm and leg and remounted his bike. 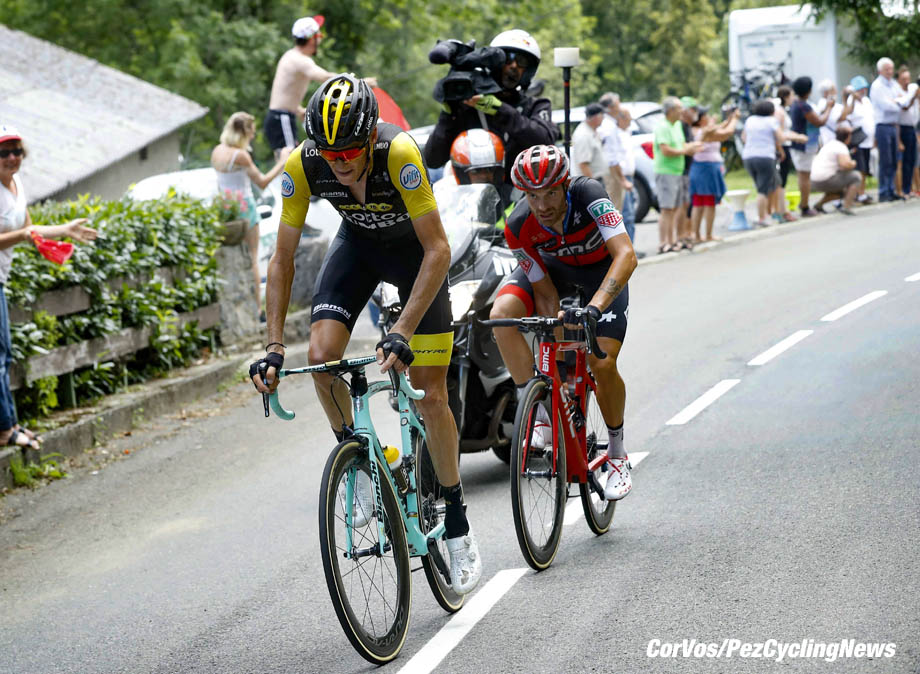 Gesink and Caruso on a late attack

Barguil put the pressure on before the ascent of the Col de Menté, but couldn’t hold the pace set by Caruso and Gesink who had countered his move. Alaphilippe bridged the gap to crest the Col de Menté first. Thirteen riders were in the lead at this point with 36km to go. They were joined by four others at the bottom of the Col du Portillon, the last climb of the day with the peloton cruising along 11 minutes behind. 5 kilometers before the summit, Gesink, Pozzovivo and Mollema took the command of the race. 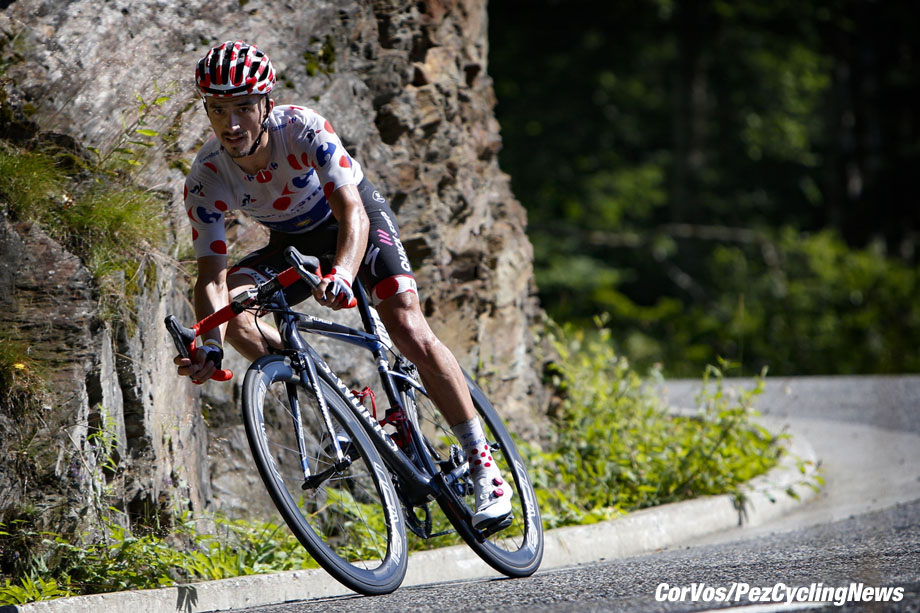 With 3km of climbing remaining, Adam Yates went solo to cross the summit of the Col du Portillon 15 seconds ahead of Alaphilippe. Yates was looking good for the possible win when he crashed on the descent with 7km to go, Alaphilippe passed him. The polka dot jersey was calm on the twisty drop into Bagnères-de-Luchon for the win, the fourth for Quick-Step Floors after Fernando Gaviria won two bunch sprints in Vendée and Brittany. The Belgian team is only one stage win short of its 2017 score. 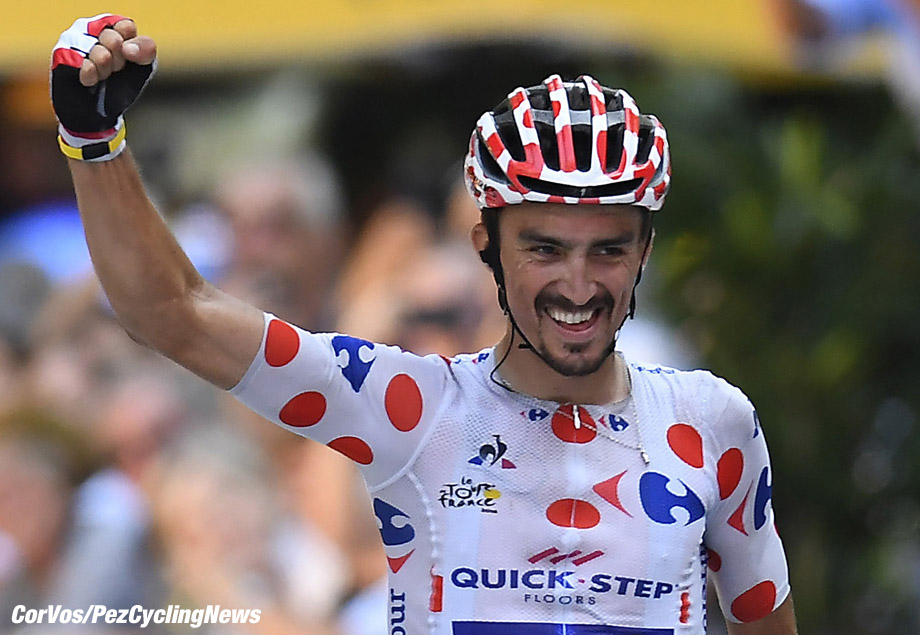 Stage winner and KOM, Julian Alaphilippe (Quick-Step Floors): “Today it was a really crazy day. I had pain in the legs, but I don’t think I was the only one suffering. I knew the finale, with the climb and the downhill, but I still can’t believe that I won again. Taking two victories, one in the Alps and another one in the Pyrenees, is mind-blowing.” 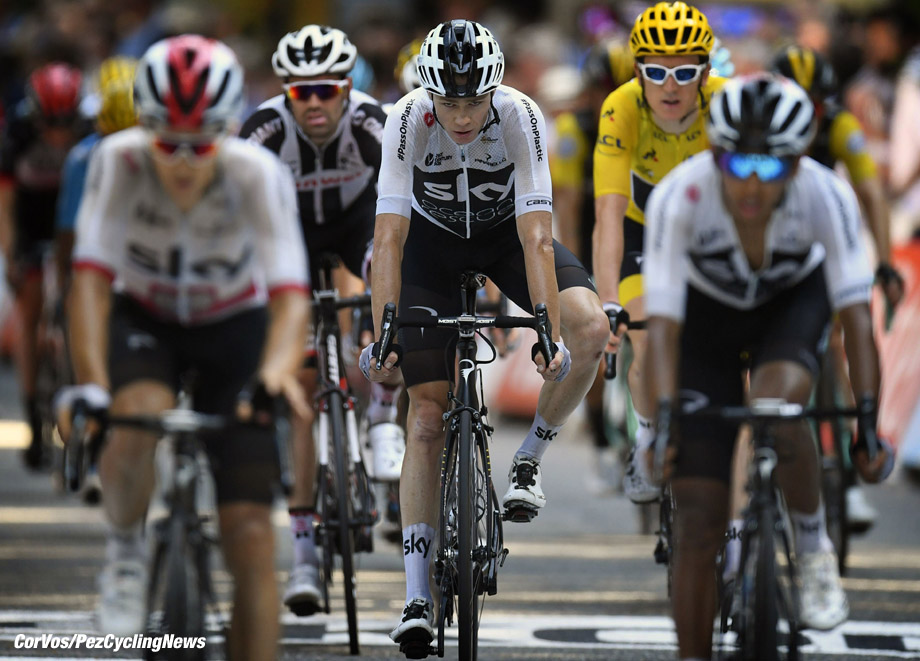 The top men came in together – Another day down

The yellow jersey group comprising all the favorites crossed the line 8:52 down on Alaphilippe.

Moscon, Cavendish And Other Things TOUR!