Stage Report: Another day of crashes, from the start to the finish riders were hitting the tarmac. Primoz Roglič (Jumbo-Visma) was the main loser of the GC men, but he wasn’t the only one. In the sprint The yellow jersey of Mathieu van der Poel (Alpecin-Fenix) led-out Tim Marlier for the stage win. The Dutchman held his overall lead. 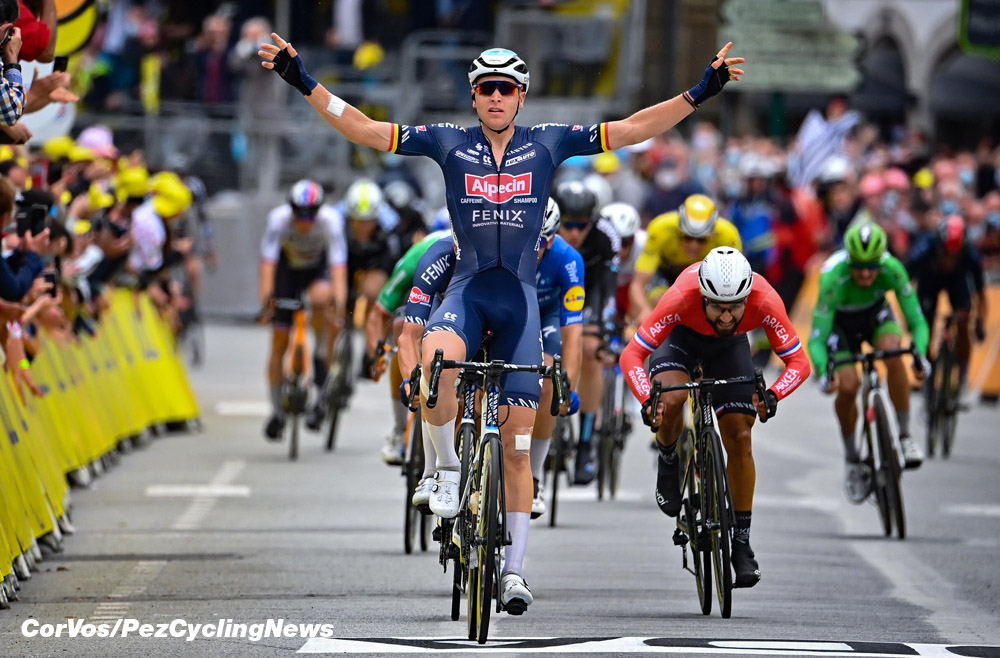 – The final kilometre of Stage 3 and read our full report and pics below:-

Tim Merlier won a chaotic third stage of the 2021 Tour de France. The Alpecin-Fenix sprinter was the fastest from a thinned-out peloton in the streets of Pontivy after almost 183 kilometres. The yellow jersey remains in the hands of teammate Mathieu van der Poel, who survived the crazy final. Top favourite Primož Roglič lost valuable time due to a late crash. 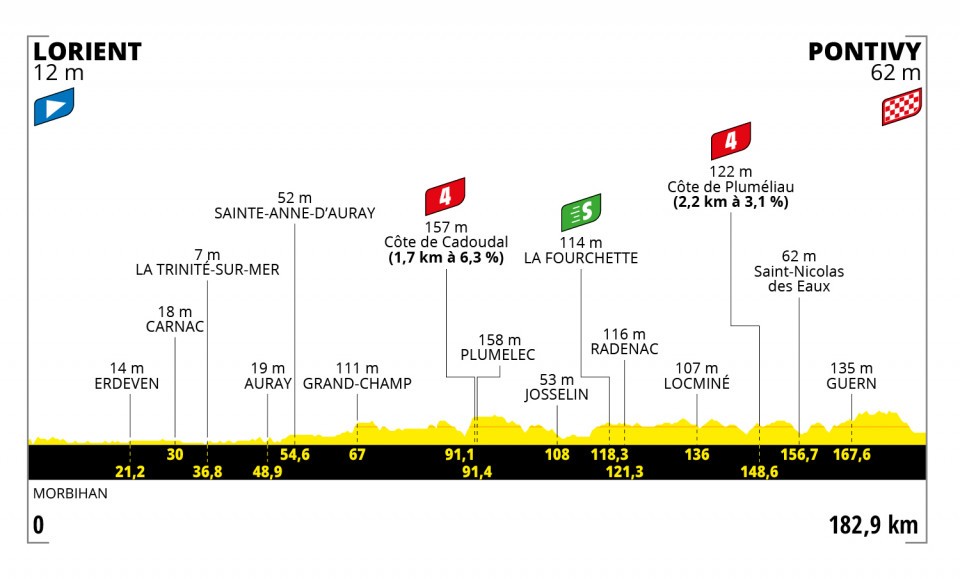 Tour boss, Christian Prudhomme describes stage 2: “Warren Barguil, best climber of the 2017 Tour should have all eyes on him as he takes off from his birth area. But he shouldn’t be in the spotlights at the finish: by the Château des Rohan, the sprinters certainly won’t want to miss out on this first opportunity they have to express themselves on this edition.” 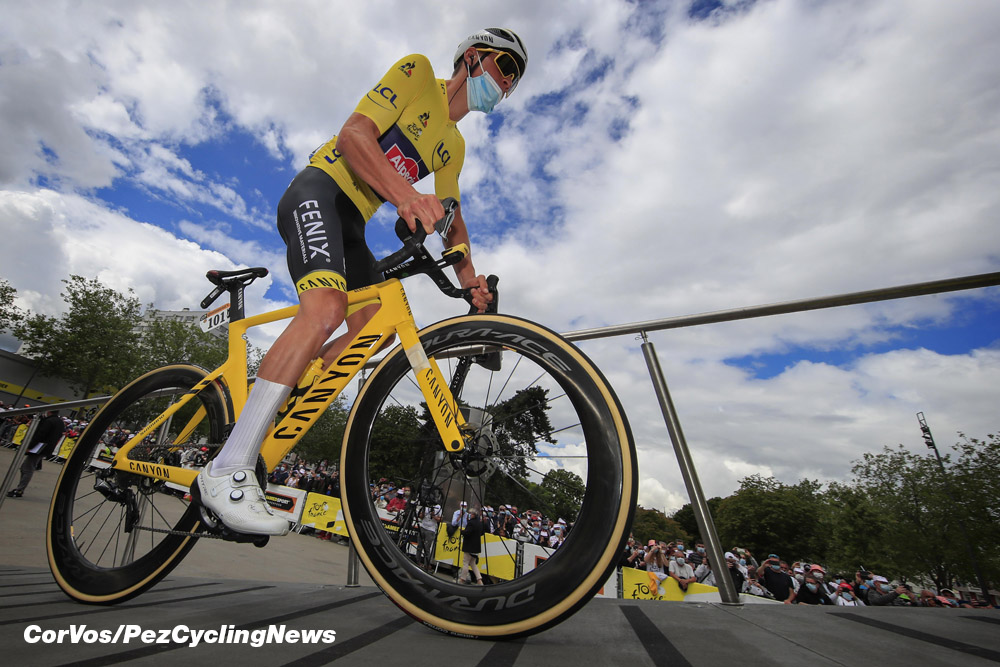 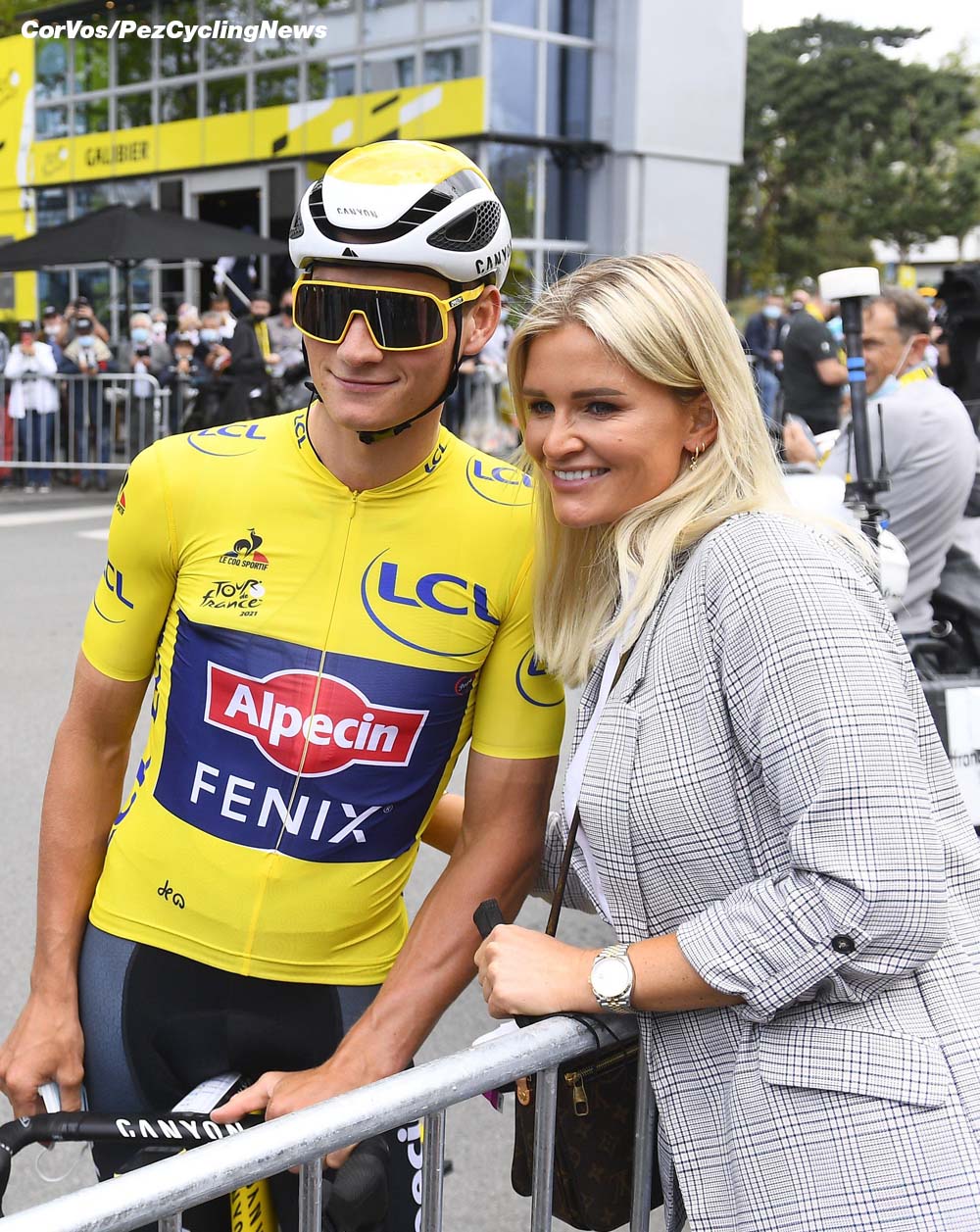 The first attack of the day was the right one. After a nod from Jasper De Buyst, Ide Schelling knew that he would be able to collect some KOM points. The BORA-hansgrohe attacker was the wearer of race leader, Mathieu van der Poel’s polka dot jersey and he knew he had to take at least 1 point to get on the podium. There were two climbs of fourth category and Schelling could end up being the actual wearer of the KOM jersey by the end of the day. 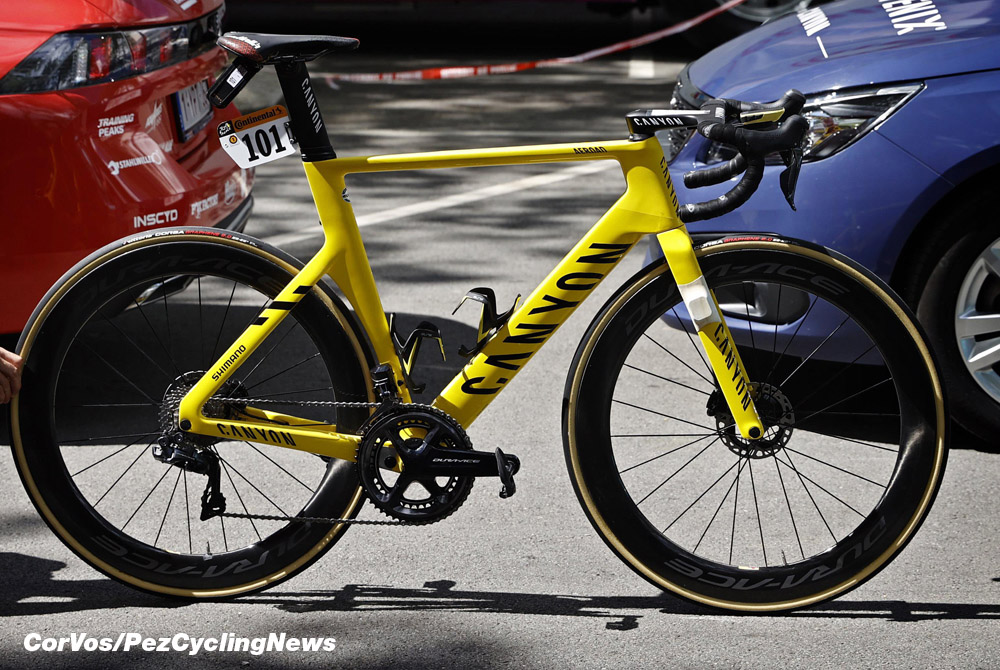 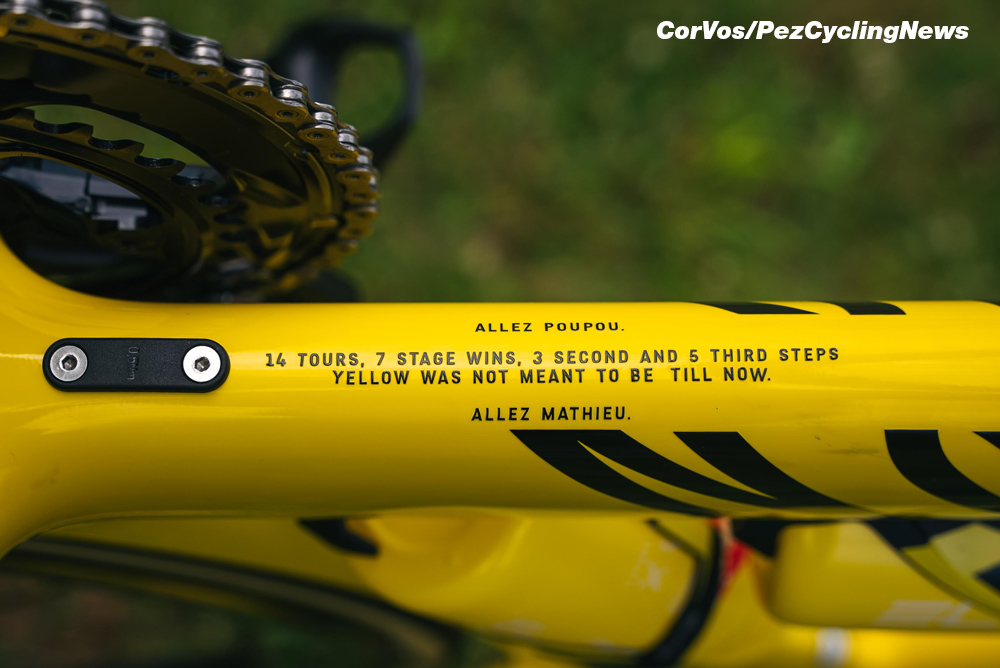 Schelling was accompanied by Michael Schär (AG2R Citroën), Jelle Wallays (Cofidis), Cyril Barthe and Maxime Chevalier (B&B Hotels). The five escapees never got more than 4 minutes, because the sprinter’s teams of Deceuninck – Quick-Step, Lotto Soudal and Groupama-FDJ had decided to keep the gap small. There was not much nervousness in the peloton, but after an hour there was a big crash. 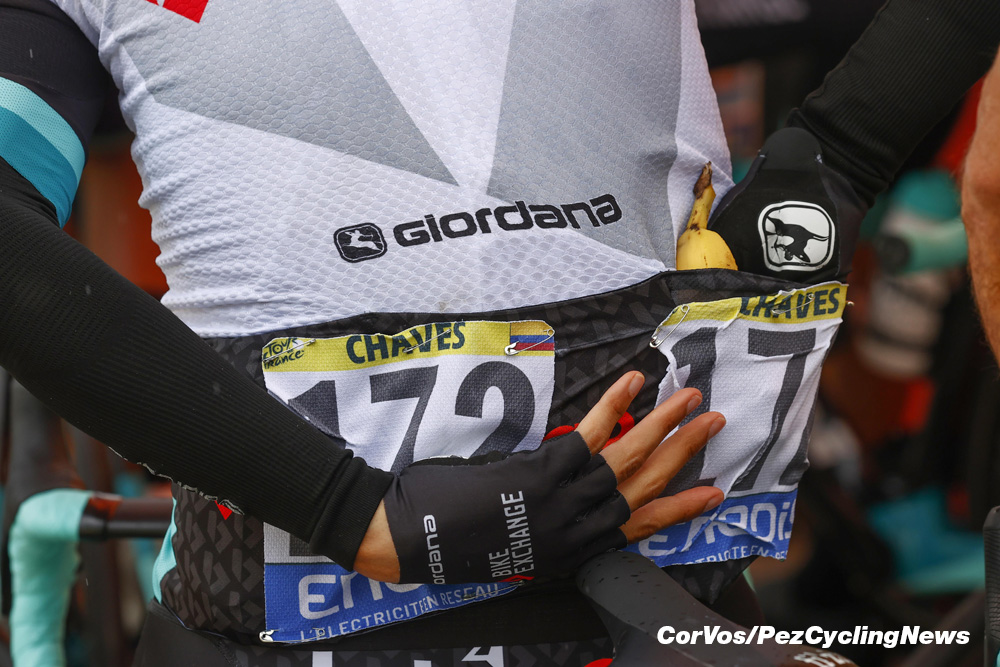 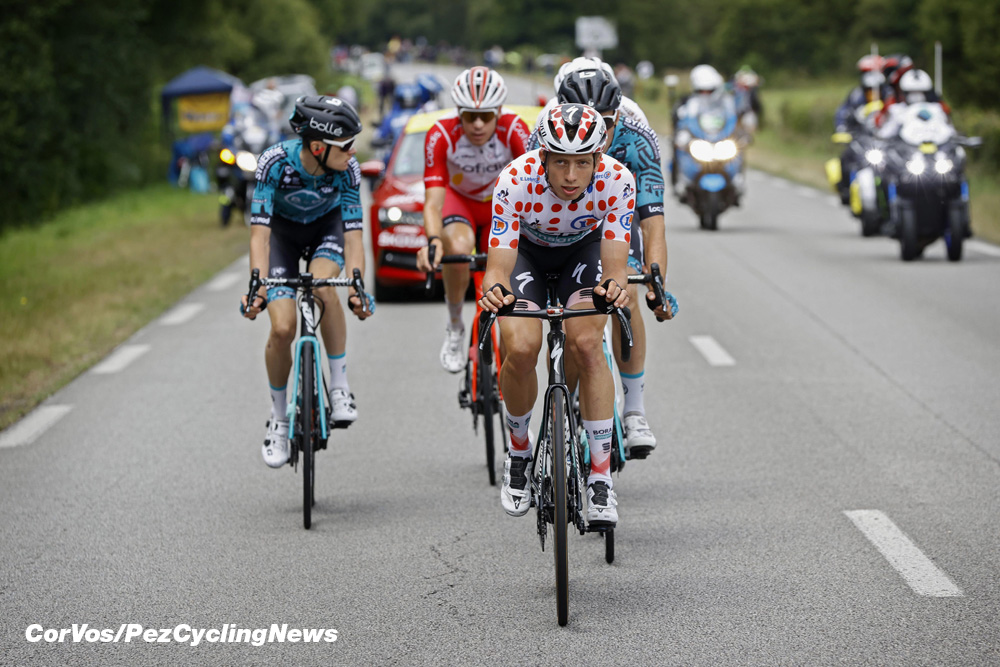 Geraint Thomas was the first rider to crash hard. The INEOS Grenadiers leader took Robert Gesink, Tony Martin and Steven Kruijswijk with him in his fall, with major consequences for Gesink. The experienced Jumbo-Visma rider had to abandon. Thomas had dislocated his shoulder, but it was quickly put back allowing the Welshman to continue. With the help of some domestiques he quickly managed to get back in the peloton. 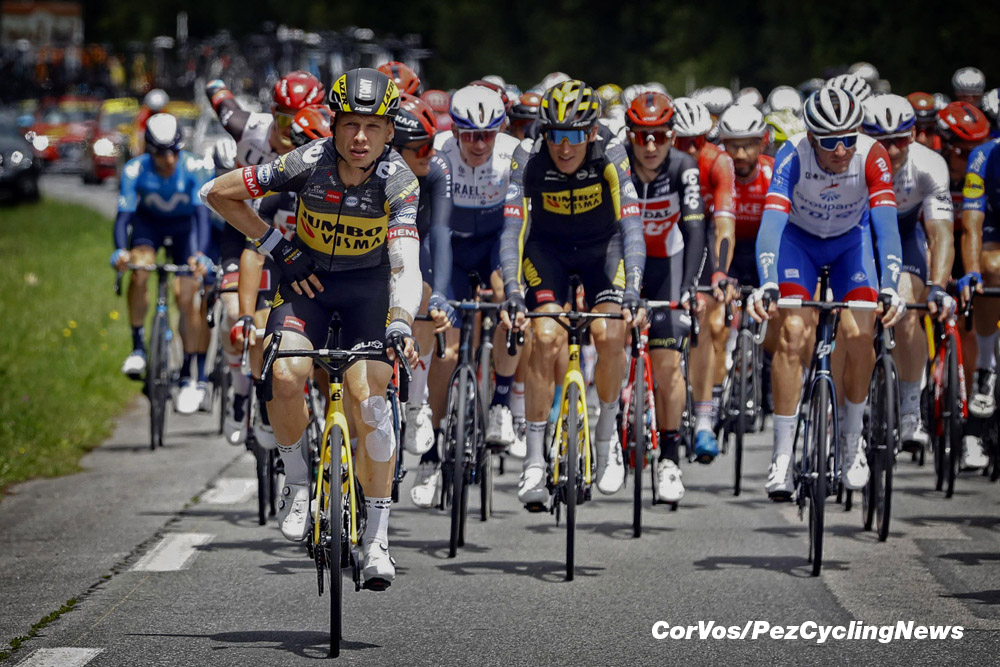 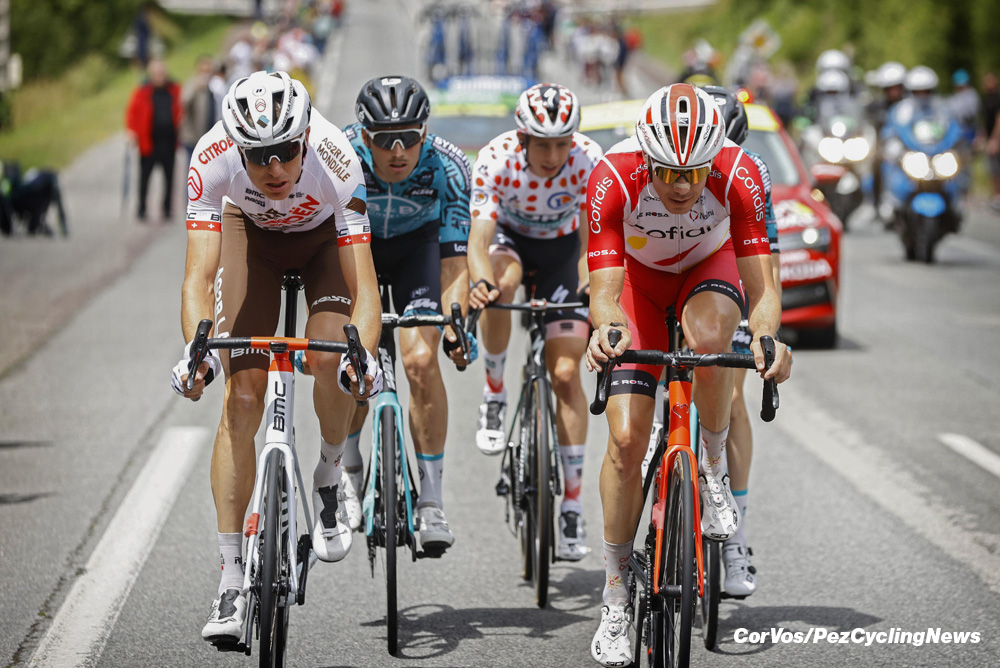 The break was not allowed too much time

Halfway through the stage was the first KOM of the day. Schelling was not troubled by his fellow escapees and was able to take the only mountain point, so that he was now in the lead of the classification. Schelling dropped back into the peloton, leaving Schär, Wallays, Barthe and Chevalier in the lead with more than 2 minutes in hand. Coming to the intermediate sprint, some time was taken back by the peloton. Ewan was just ahead of Cavendish. 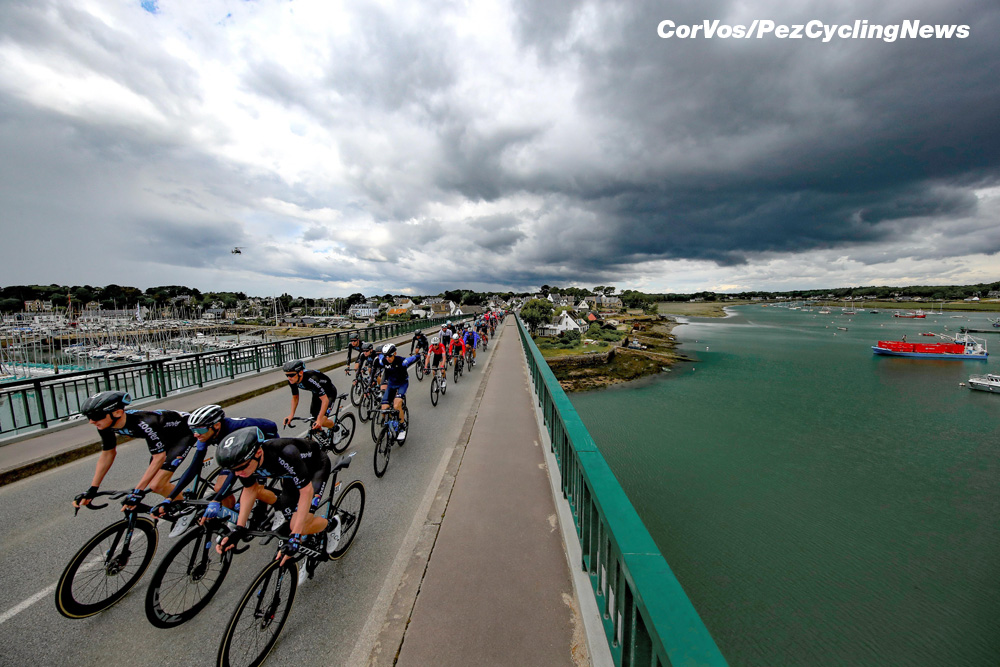 The peloton wasn’t at full speed, but not hanging around either 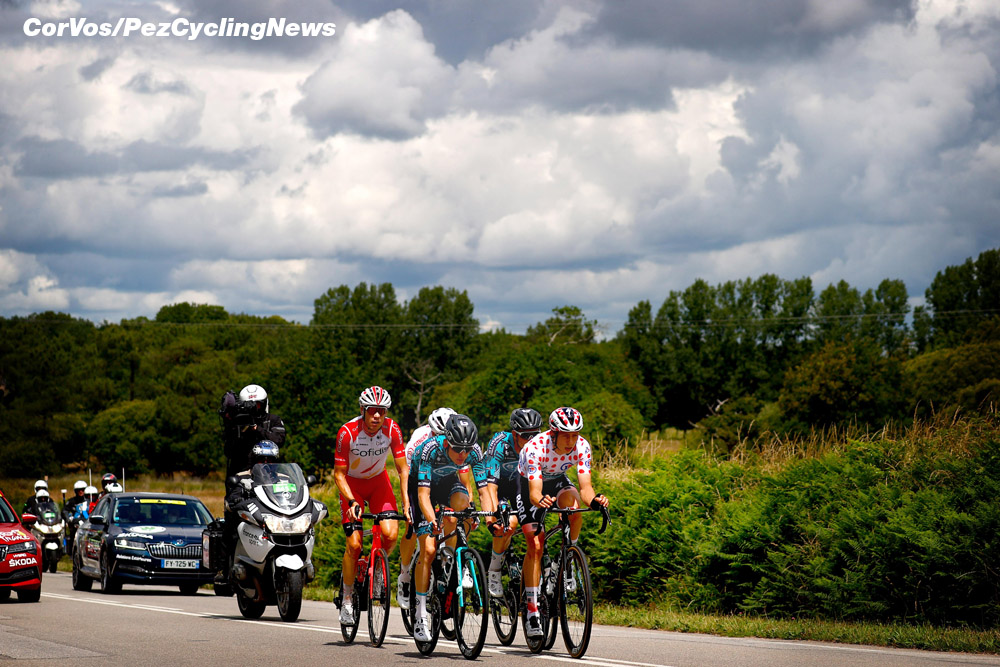 Schelling didn’t stay in the break

In the peloton, which was repeatedly hit by rain showers, there were punctures for green jersey Julian Alaphilippe, sprinter André Greipel and Christophe Laporte. They were able to return in time to join the battle of the lead-out trains at the head of the peloton. The peloton was still half a minute behind the three remaining front riders; Chevalier dropped out 15 kilometres from the finish. 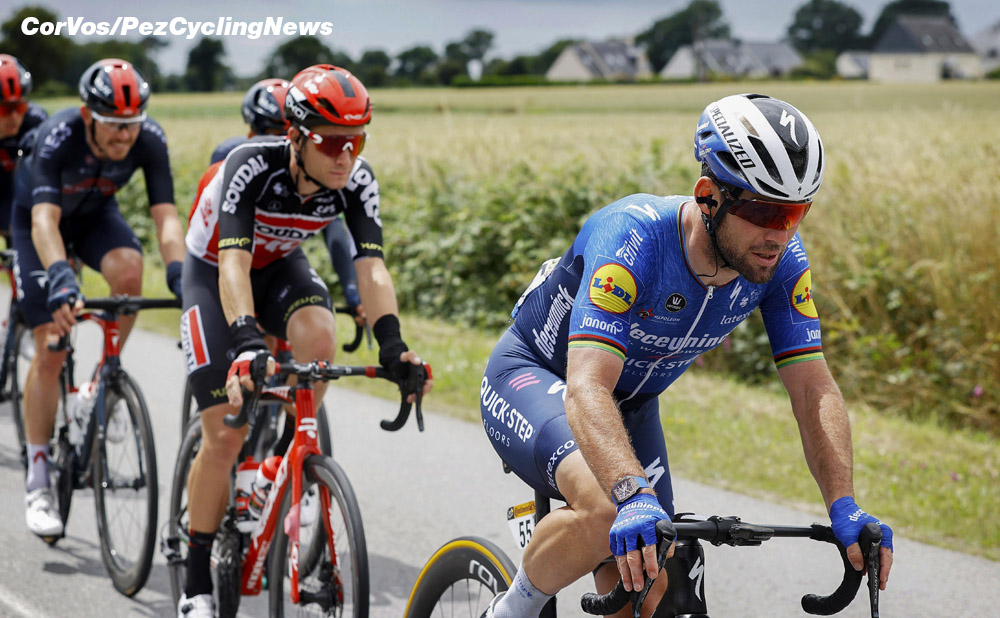 Mark Cavendish was very active during the stage 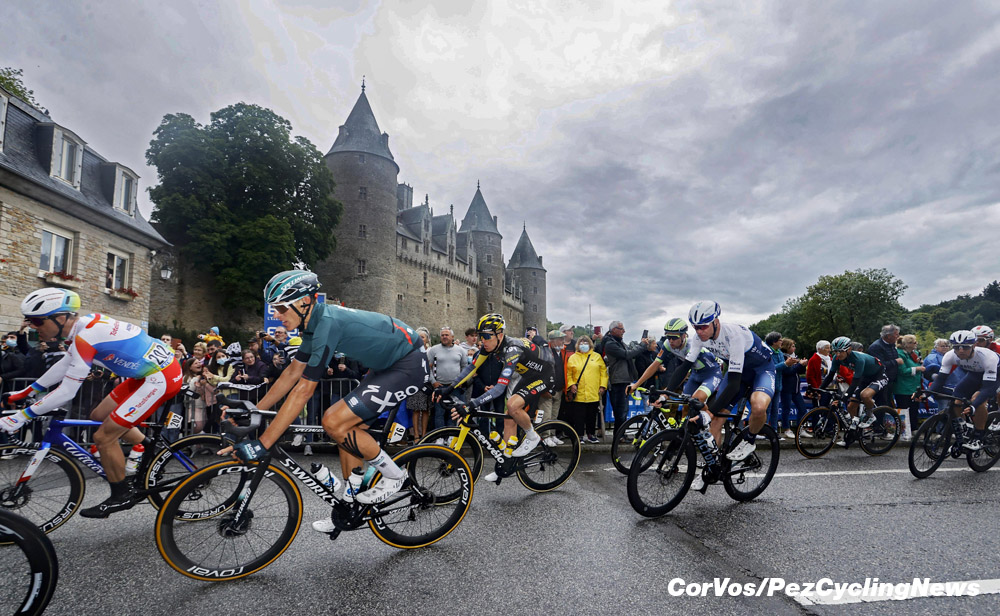 Rain showers on most of the course

Nervousness increased on the narrow Breton roads, this caused a small crash for Valentin Madouas and 10 kilometres from the finish a serious crash of another top favourite, Primož Roglič. The Slovenian fell hard, but managed to continue, bruised and scraped. The peloton was split into several pieces by the crash. A Jumbo-Visma train tried to bring the leader back, but they were already more than a minute behind. 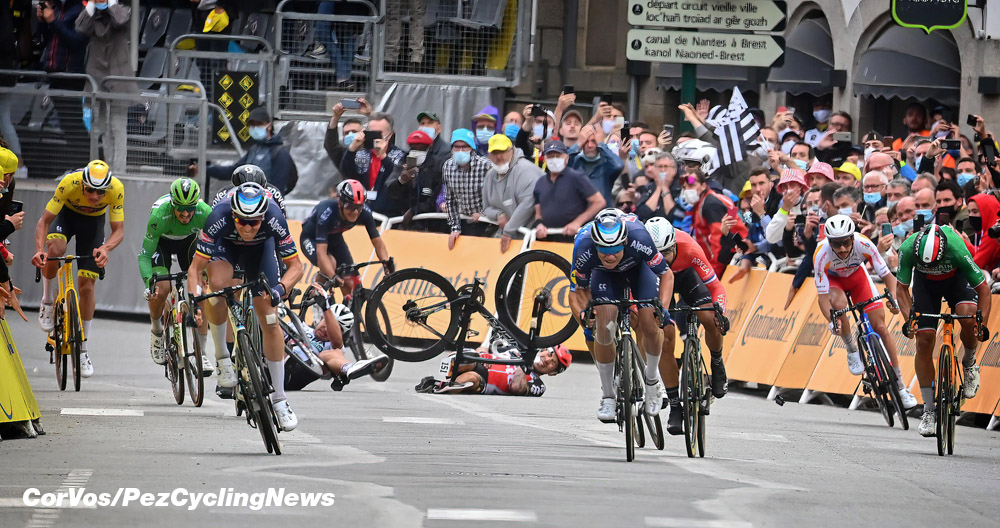 Sprint chaos as Sagan and Ewan hit the deck 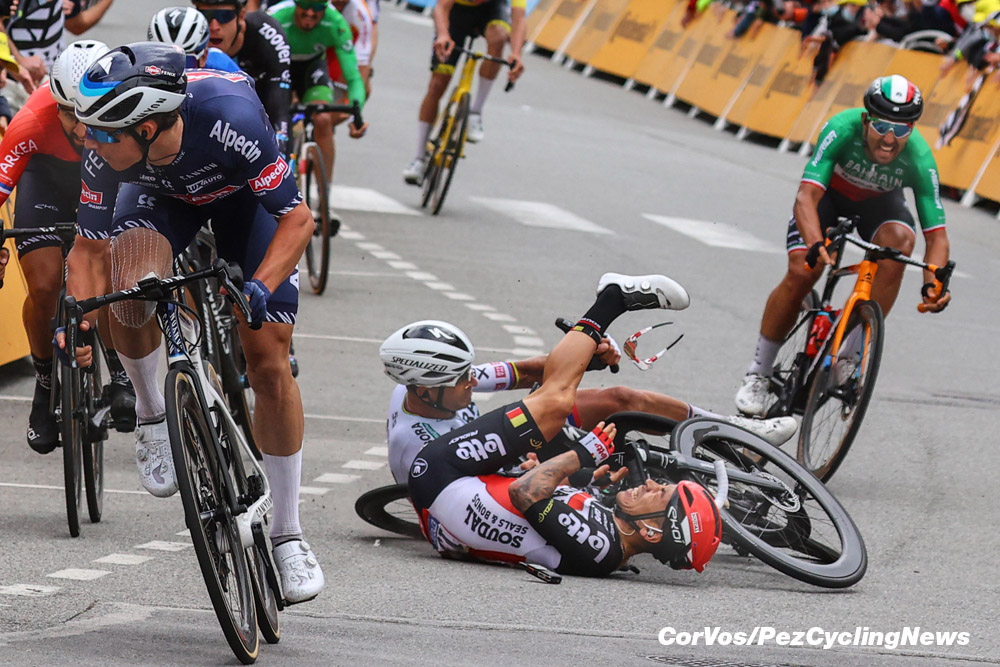 It didn’t look good for Ewan

Five kilometres to the finish, the last early escapees were caught by the peloton. An even larger part of the peloton was eliminated for the stage victory due to another heavy crash. Arnaud Démare with many others was involved. The remaining peloton consisted of only about 40 riders. Yellow jersey Van der Poel survived the chaos and took the lead for his teammate 2 kilometres from the finish. 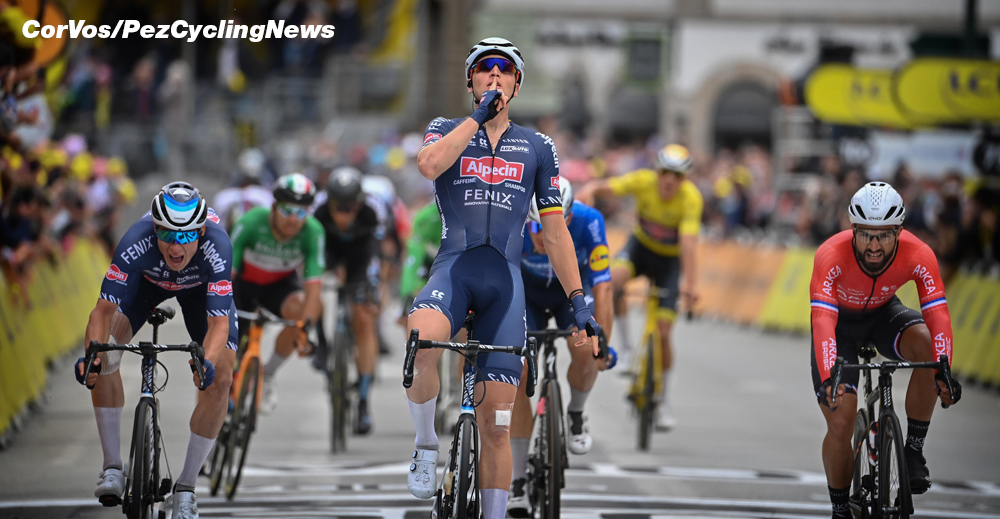 Tim Marlier – The fastest sprinter in the Tour? 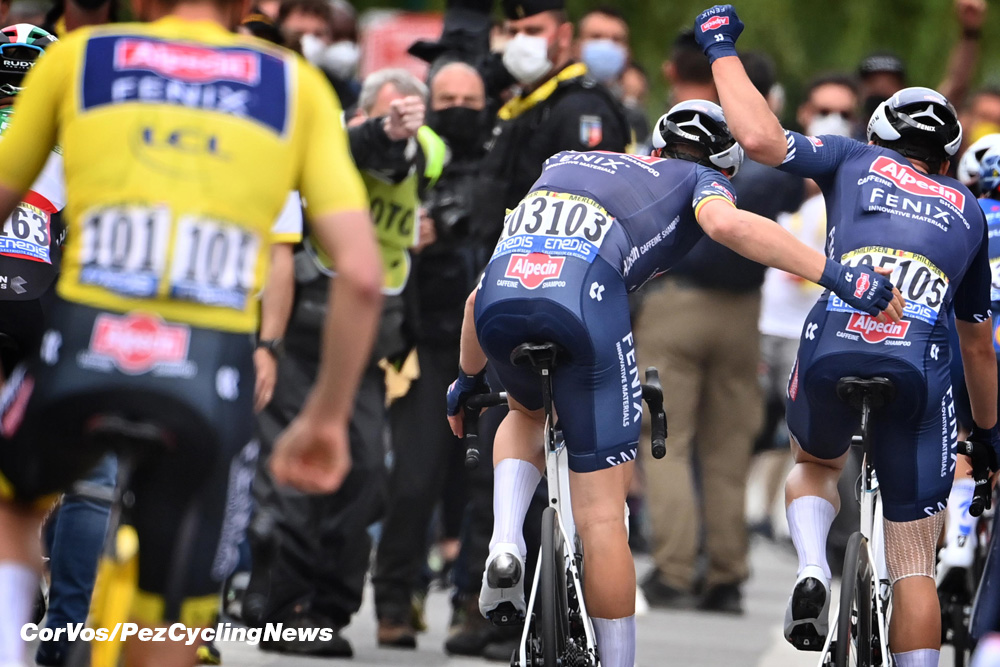 Another stage win for Alpecin-Fenix

Alpecin-Fenix ​​then started the bunch sprint with Jonas Rickaert and Jasper Philipsen for Tim Merlier, who finished it off perfectly. In the last chicane there was a crash with Caleb Ewan and Peter Sagan, who hit each other and went down. 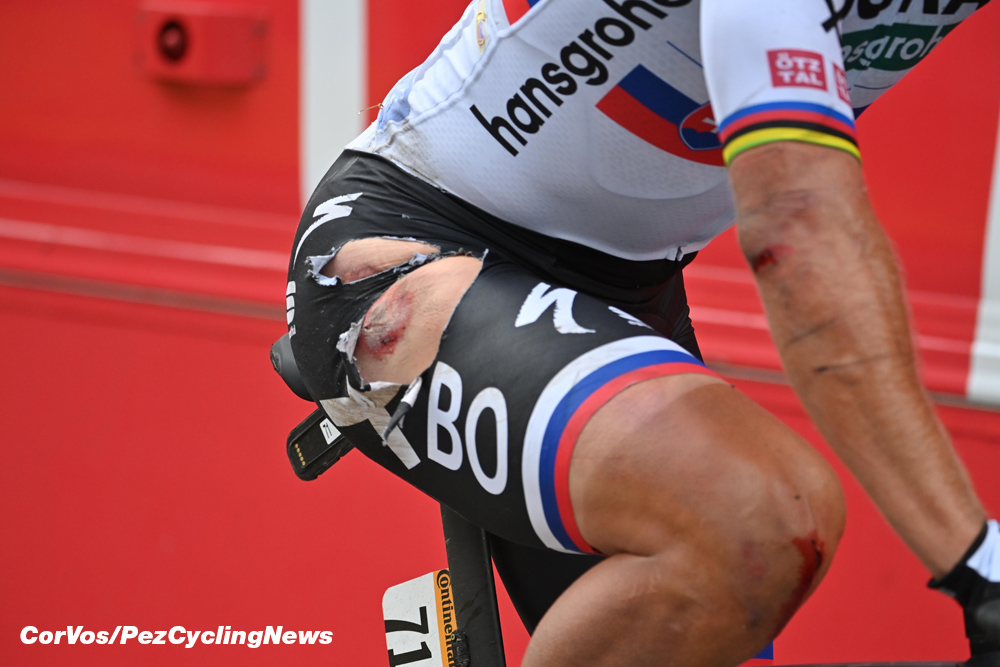 Damage to Peter Sagan – Caleb Ewan was much worse

Stage winner, Tim Merlier (Alpecin-Fenix): “This is the biggest victory of my career so far – a dream come true. After my victory in the Giro d’Italia I was already very happy, and now I’ve won a stage at the biggest race of the world. I just can’t believe it. You saw how Mathieu [van der Poel] did the lead out? He just loves to do it. Jasper [Philipsen] did an excellent job in the last 700 meters and I only needed to take off with 150 meters to go. I was surprised I didn’t have anyone on my wheel, but I heard there was a crash… so I guess that’s why. This Tour has already been a success for us at Alpecin-Fenix. We are very happy with these two stages and Mathieu’s Yellow jersey. I hope to reach Paris and fight for the victory in the Champs-Elysées.” 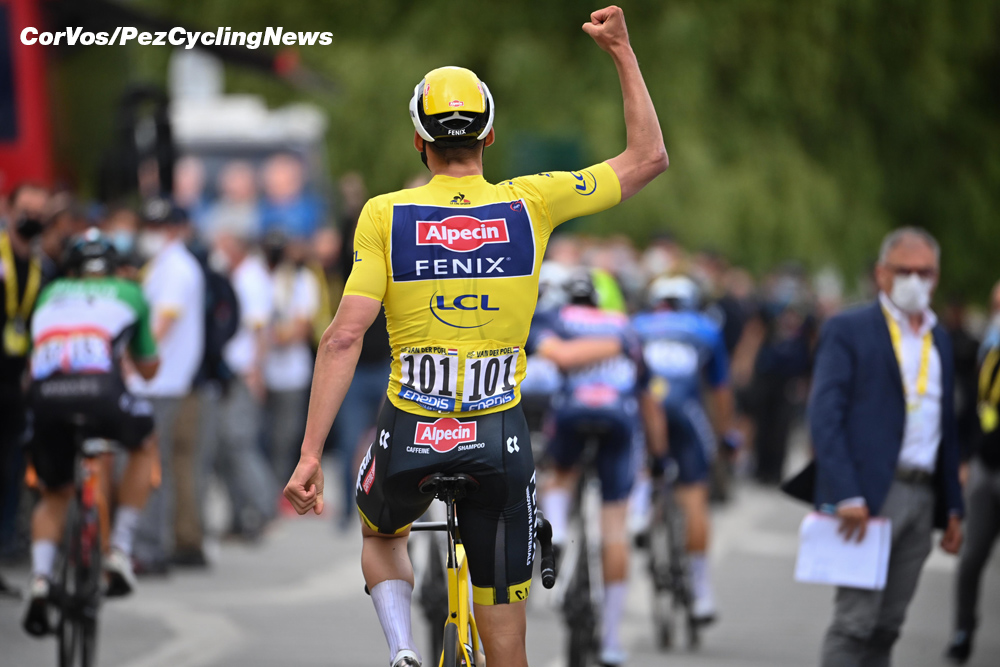 Overall leader, Mathieu van der Poel (Alpecin-Fenix): “I felt very good today. I wanted to help my teammates today if I could, although I also had to focus on defending the yellow jersey. The final kilometres were super hectic, with a lot of crashes. I like leading out and I wanted to be on the front as much as possible in order to keep my guys safe. My team actually likes to make the final kilometres as fast as possible in order to avoid the fight for the position within the bunch. I’m happy I can give something back to my teammates, who are always working for me. When I peeled off with one kilometre to go, I focused on following Alaphilippe because there is only a small gap between us on the GC. It’s special to wear this yellow jersey in France. It is pretty unique, pretty big. It’s unbelievable what the team just did today. This Tour has already been a success for us. Everything that comes afterwards is a bonus.” 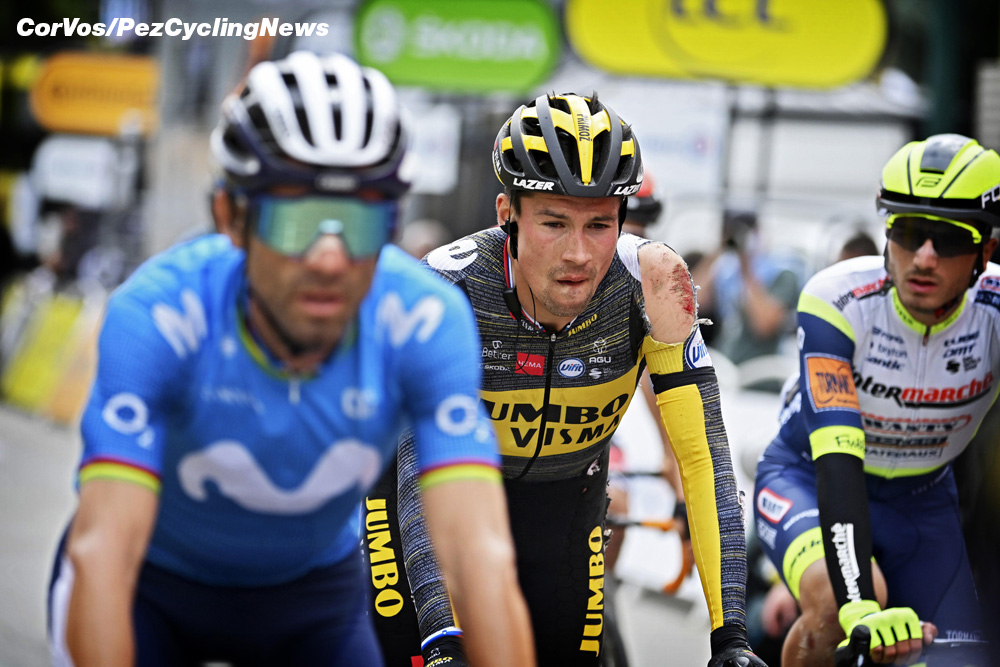 Not a good day for Roglič