Stage Report: The stage nearly went to the solo Brent Van Moer, but the Lotto Soudal rider was swamped by the sprint hungry bunch only metres from the finish line. The battle was on for the win and it was the Manx Missile, Mark Cavendish (Deceuninck – Quick-Step) who shot ahead of the others for his 31st Tour de France stage win. Mathieu van der Poel (Alpecin-Fenix) held the overall lead. 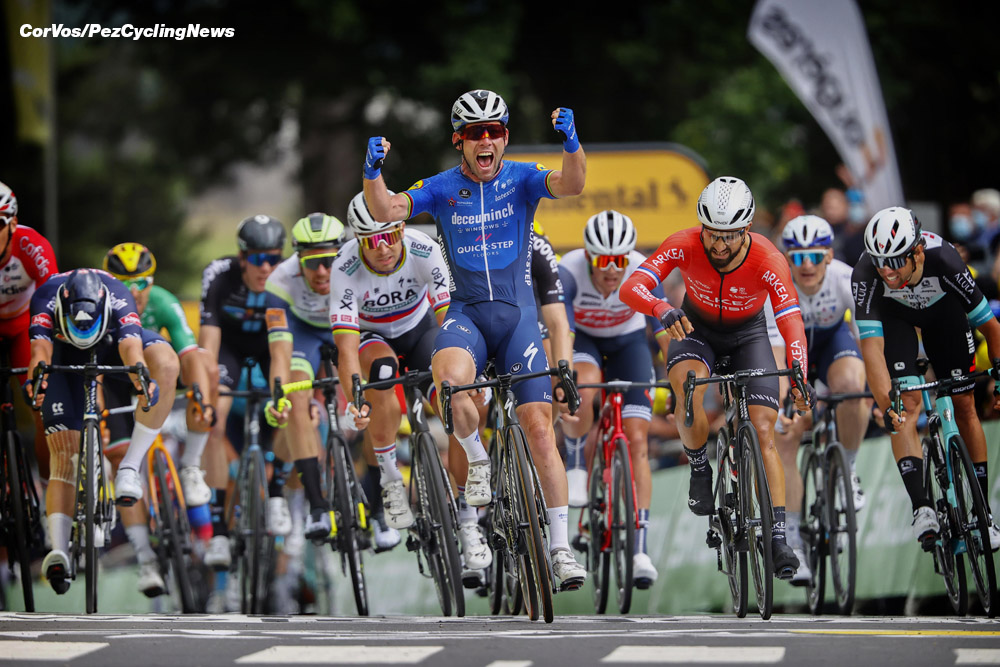 The stage win he promised the Deceuninck – Quick-Step team

– The final kilometre of Stage 4 and read our full report and pics below:-

The fourth stage of the 2021 Tour de France fell prey to Mark Cavendish. The Deceuninck – Quick-Step Brit, who also won in Fougères six years ago, was the first to cross the line after a 150-kilometre stage, ahead of Nacer Bouhanni and Jasper Philipsen. Mathieu van der Poel’s yellow jersey was not in danger. 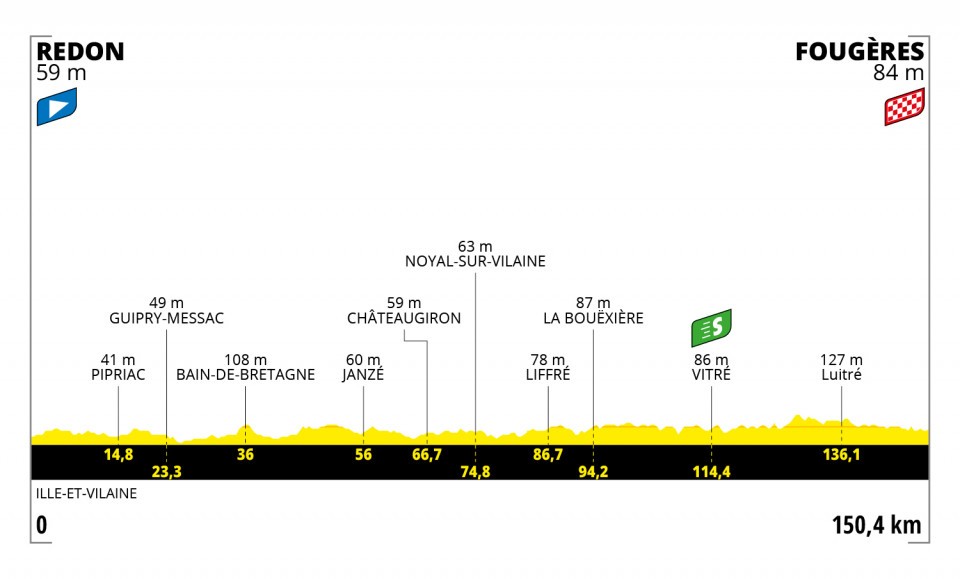 Tour boss Christian Prudhomme describes stage 4: “This journey through Argoat, the beautiful inland Brittany entirely set in the Gallo country and going from one side to the other of the Ille-et-Vilaine area is another fine opportunity for the sprinters. Unless if audacious riders make the best of the hilly forrest roads or windy conditions on the few unsheltered uplands to remain clear of the hungry pack.” 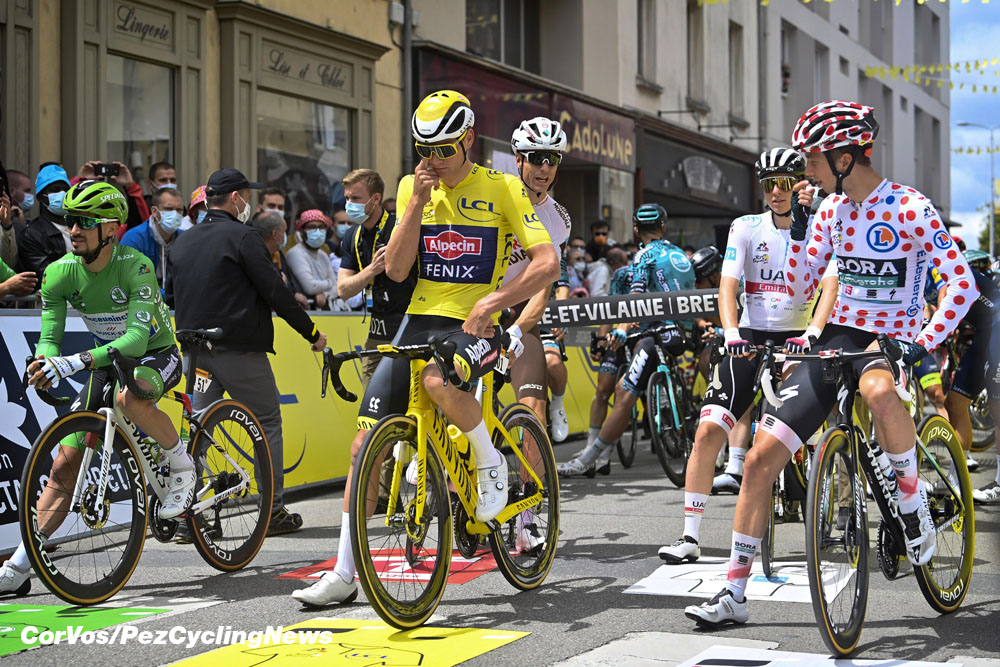 The jerseys on the start line 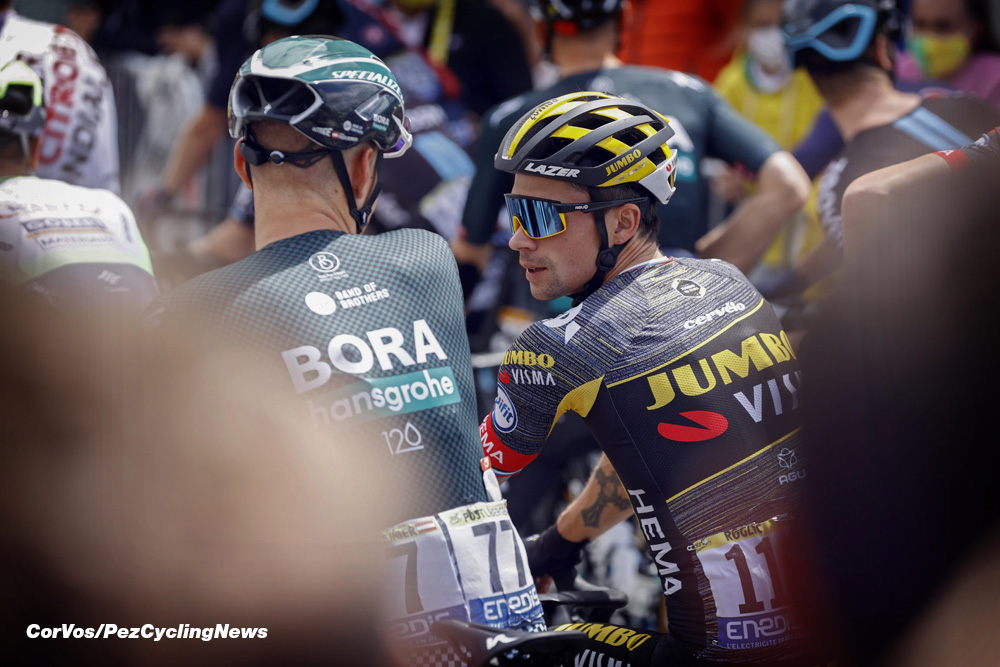 Roglič made it to the start line of stage 4

Prior to the stage, the talk was mainly about yesterday’s stage 3. Several parties wanted to take different action. There was a threat of a strike by the riders, but that was contradicted by the riders’ union CPA. On behalf of the riders, they wanted to draw attention to the use of the 3-kilometre rule. Other riders spoke of a short strike at the start of the stage. 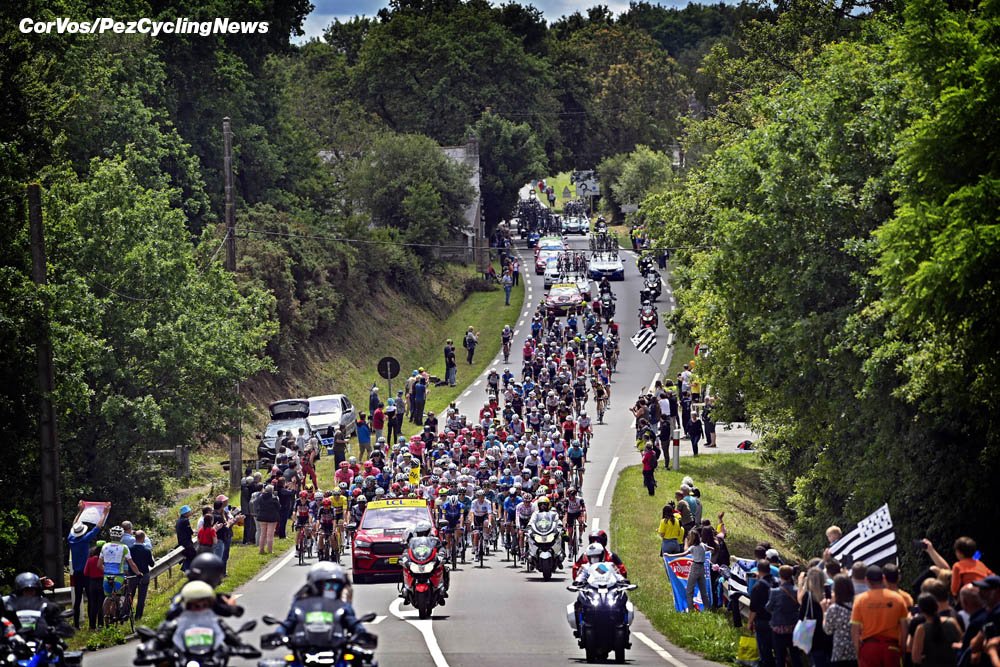 The stage was neutralised for a little at the start 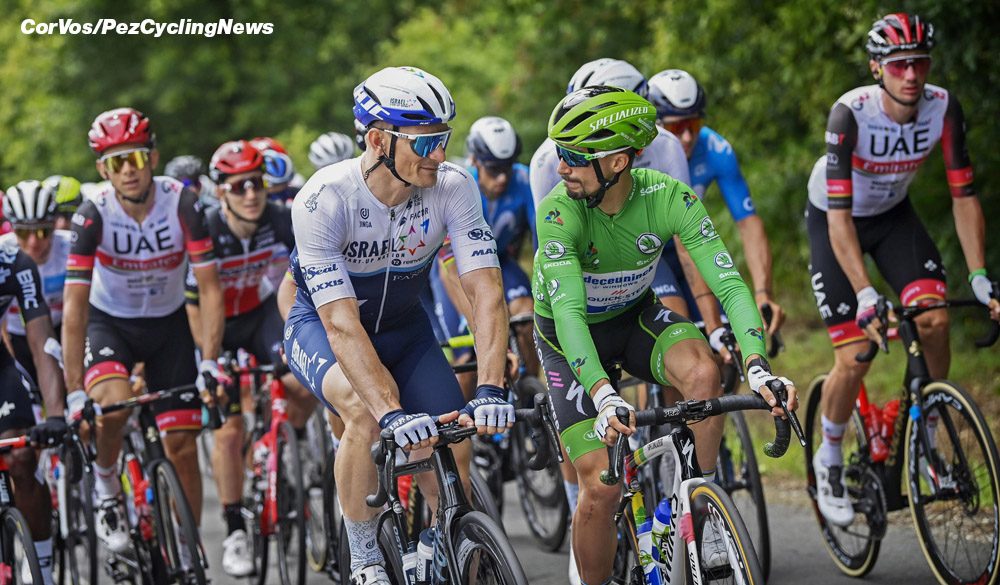 “Are we having a strike?”

After the neutralisation it didn’t look like there would be any action. Led by Julian Alaphilippe, the peloton continued at a slow pace, but experienced André Greipel put a stop to that. After a short chat with the green jersey wearer, he forced the race to a halt. It became a statement of almost two minutes to draw attention to safety, after which the peloton started again. However, it was still slow as the peloton remained compact for a long time. 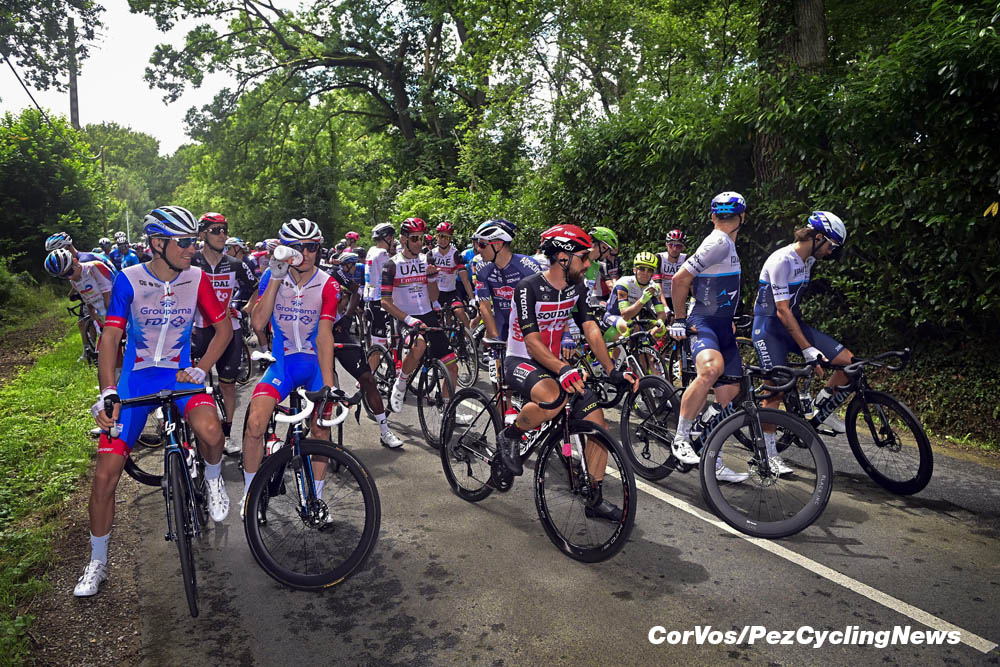 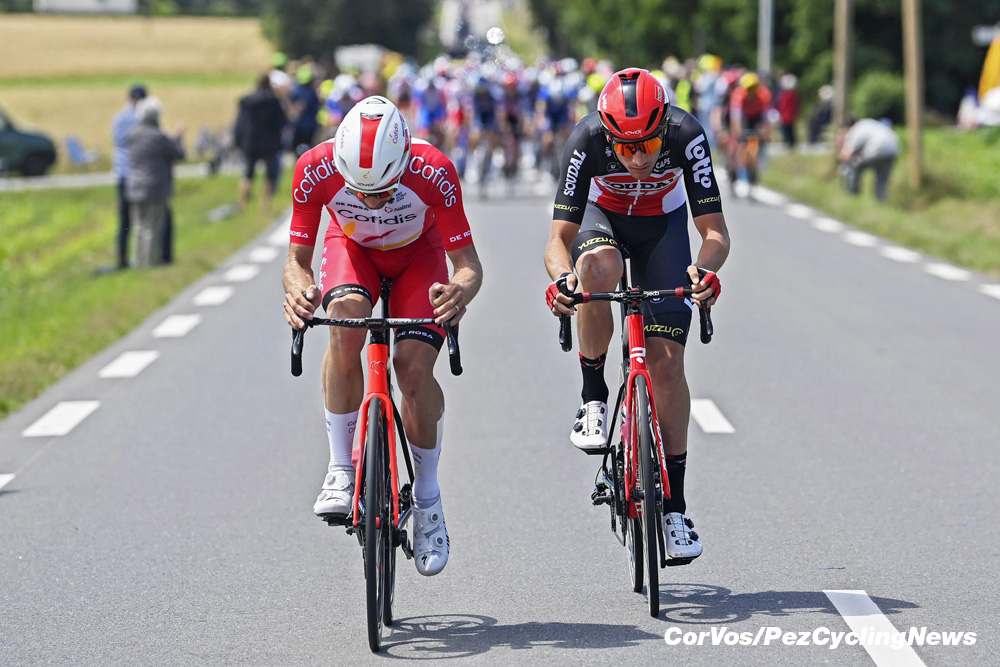 After 10 kilometres the first attack came from Brent Van Moer. For Lotto Soudal, attacking will be the motto after Caleb Ewan had to abandon with a broken collarbone. Pierre-Luc Périchon from Cofidis joined him. The two escapees got almost 3 minutes ahead of the Deceuninck – Quick-step, Groupama-FDJ and Alpecin-Fenix led bunch. The peloton kept the difference around two minutes. 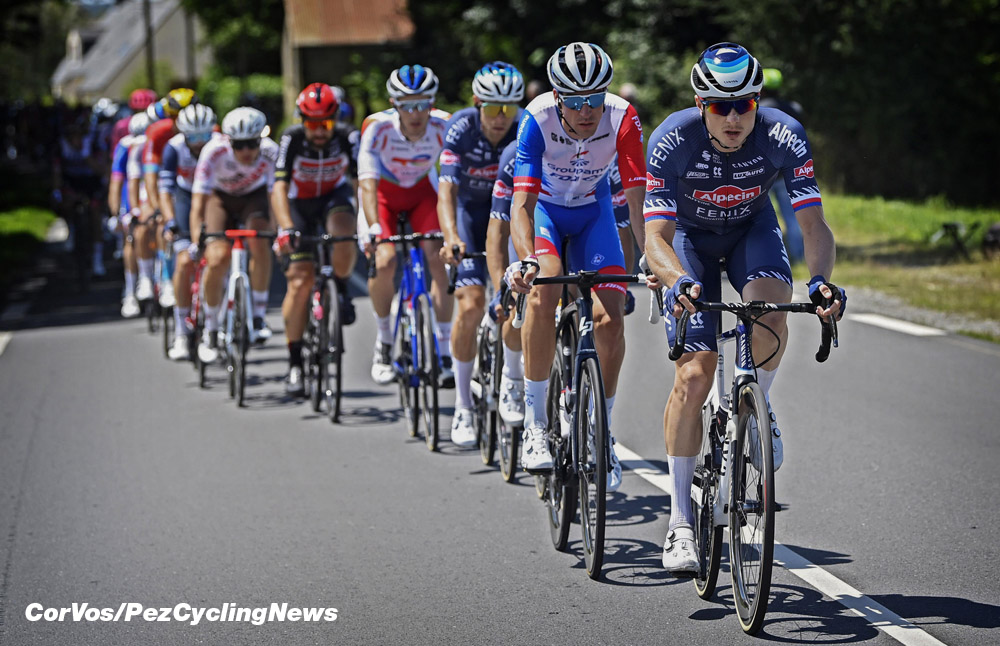 Petr Vakoc did some of the chase work for Alpecin-Fenix 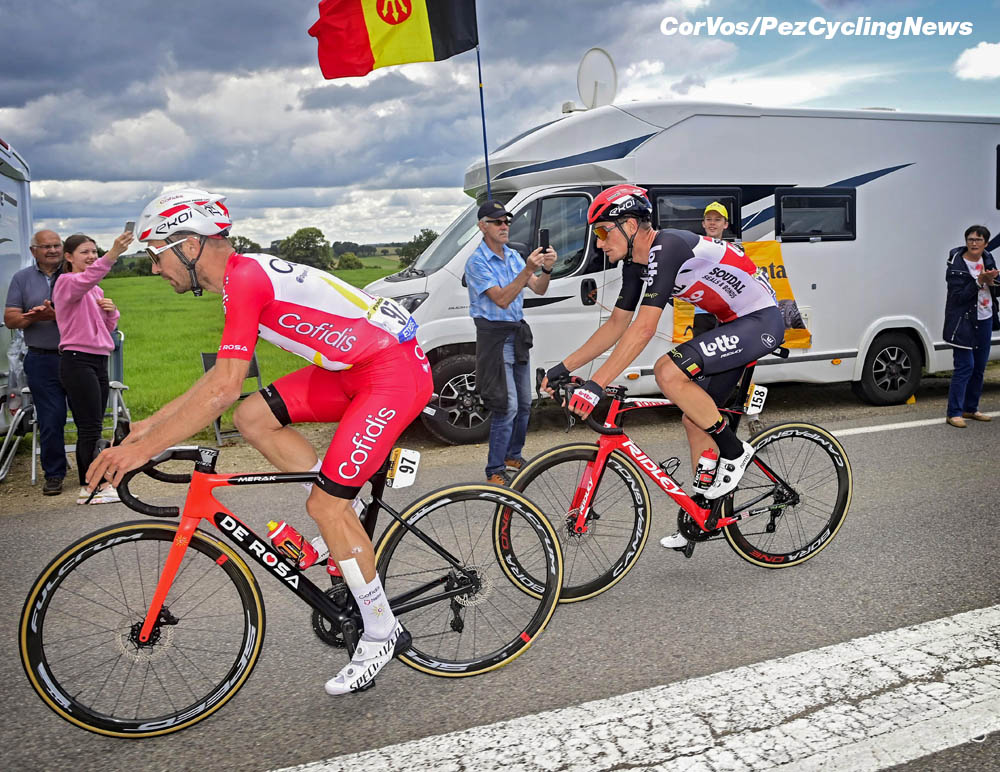 During the stage Mark Cavendish had to change bikes due to a broken saddle, but for the rest it was a procession of the peloton that kept the gap with Van Moer and Périchon small. At the intermediate sprint in Vitré, it was Van Moer who jumped his French flight companion. More than a minute behind it was Cavendish who was the fastest, ahead of Michael Mørkøv, Nacer Bouhanni and Michael Matthews in the bunch. Then the first lead-out trains were put on the rails at the front of the peloton. 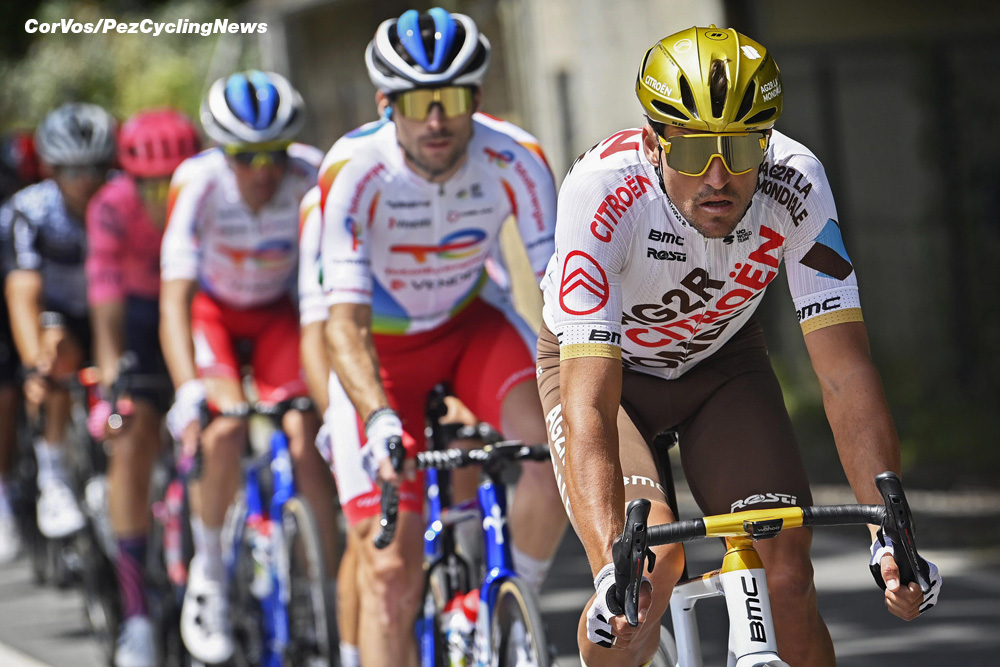 Greg Van Avermaet on the front 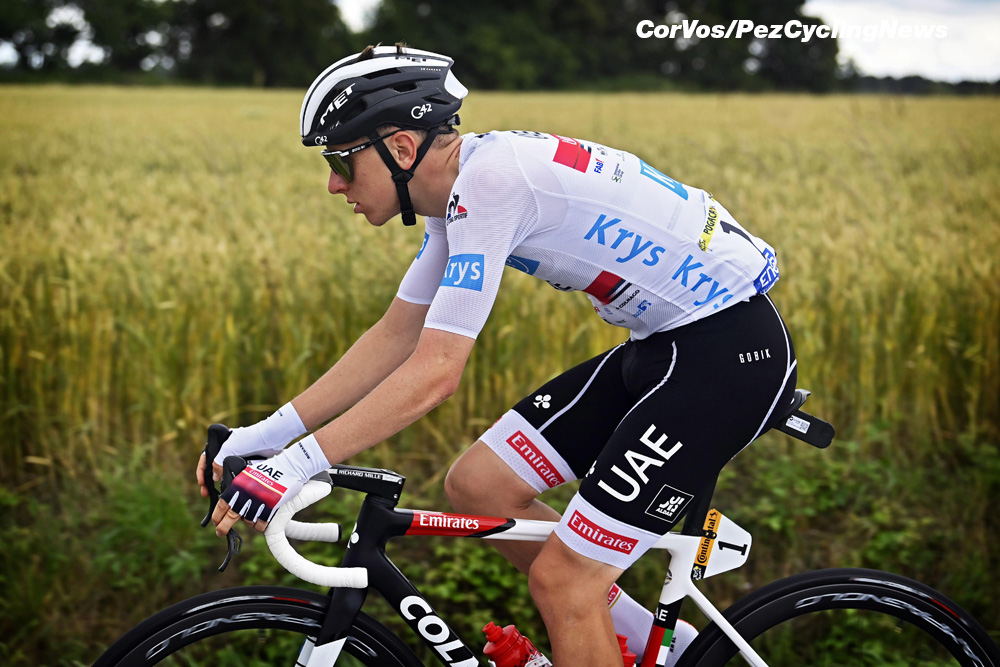 The leading duo worked well until 15 kilometres before the finish. Périchon tried to drop Van Moer, but the Lotto Soudal rider countered that attack and then jumped away himself. Van Moer went into the last 13 kilometres with a lead of 45 seconds, a difference that he managed to extend to over a minute in a short distance. 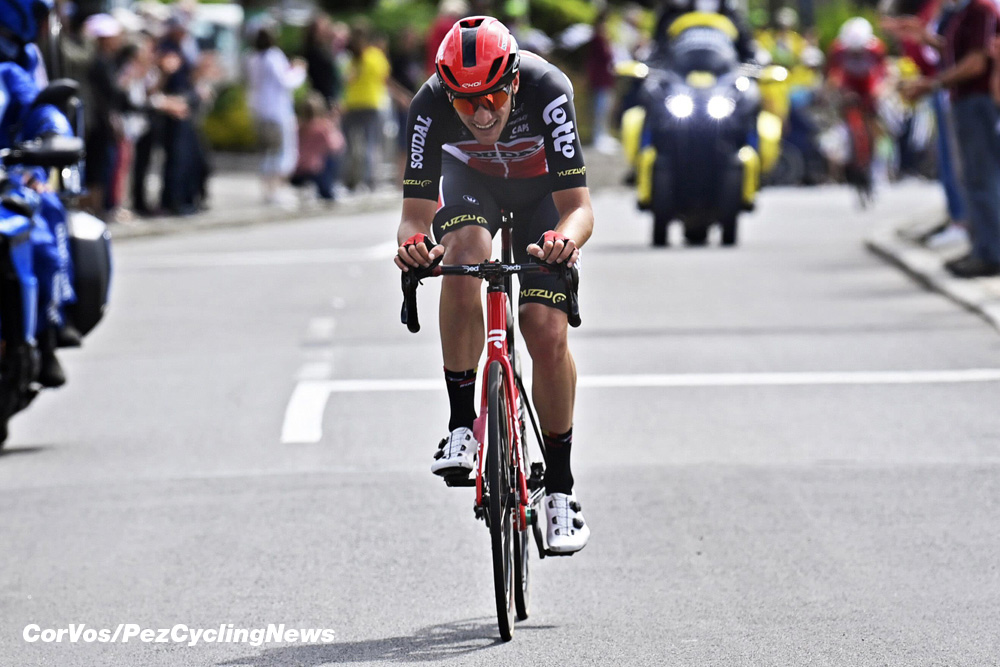 It was so close for Van Moer

The sprinter’s teams kept at the head of the peloton, with Alpecin-Fenix ​​and Deceuninck – Quick-Step doing most of the work, although Lotto Soudal tried to upset the chase. The difference went down rapidly on the run-in to Fougères in the finalé. Three kilometres from the finish, Van Moer still had a 30 second lead. 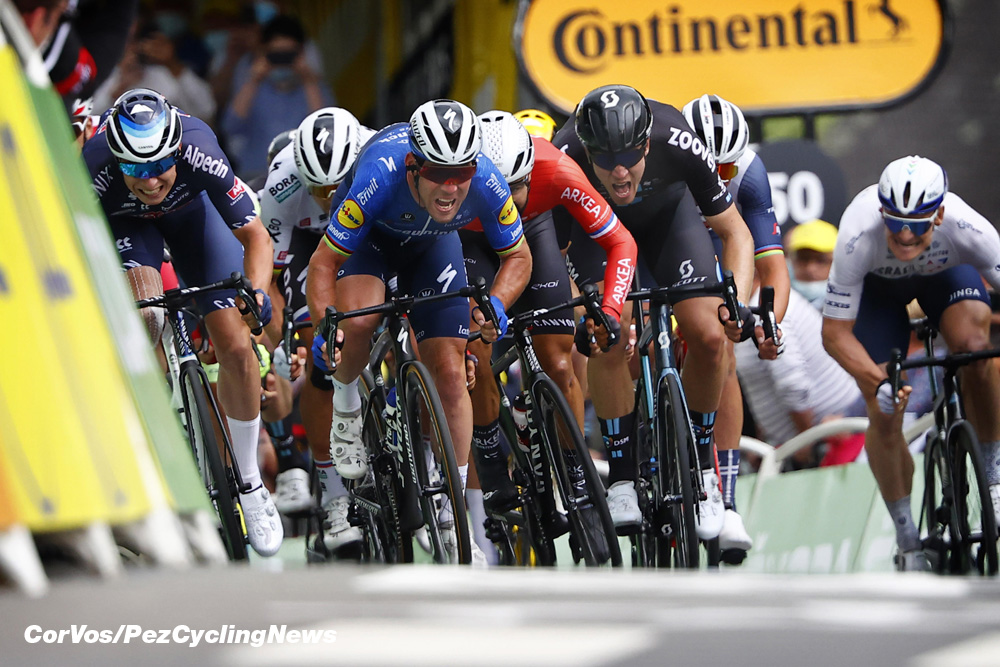 Cavendish charged through to the line

DSM and Trek-Segafredo also joined the battle at the front with Cees Bol and Mads Pedersen. The peloton was pulled onto a long thin line due to the high pace, after which Van Moer came into view on the rolling road to the line. Julian Alaphilippe also lent a hand in Cavendish’s service. The ascending finish line was ultimately the end for Van Moer. He was captured 150 metres from the line, after which Philipsen was the first to start the sprint. He was outclassed in the final metres by Mark Cavendish. The Briton managed to pass Philipsen and pushed his wheel over the finish line first. Bouhanni was second, Philipsen third. Michael Matthews fourth, Peter Sagan fifth and Cees Bol sixth.

Cavendish wasn’t going let this one get away 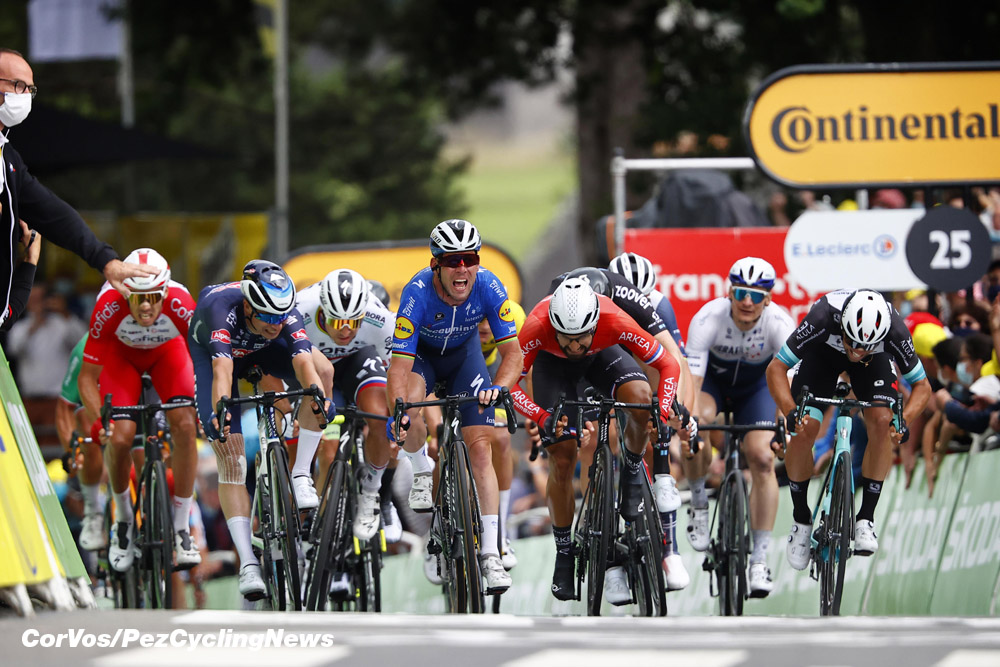 He knew he had it!

Stage winner, Mark Cavendish (Deceuninck – Quick-Step): “Just being here is special. I thought I might never come back to this race. Just thanks to the whole team. In the final kilometres we lost [Davide] Ballerini, who was due to launch my sprint, but then the green jersey and world champion [Julian Alaphilippe] put himself at my service. You see there what a team this is. So many people believes in me… When you come to DQS, with the best riders of the world, I knew it was going to be difficult to come here. I never ever want bad things to happen to other people… because it has happened to me before. Never give up. It’s a message for everyone who is going through a difficult situation. You can always come back. Never give up. That’s my message. Three weeks ago I wouldn’t even have dreamt of winning a stage like this. It takes a team like Deceuninck-Quick Step to make it. It is the best team of the world, the most professional one. It was so emotional to stand on the podium. When I was a kid, even before racing a bike myself, all I saw was the podium and the Tour de France. It’s been a whole life since I saw Chris Boardman crashing out in Ireland. To see circumstances taking that away for me was hard. It’s unbelievable to take it back.” 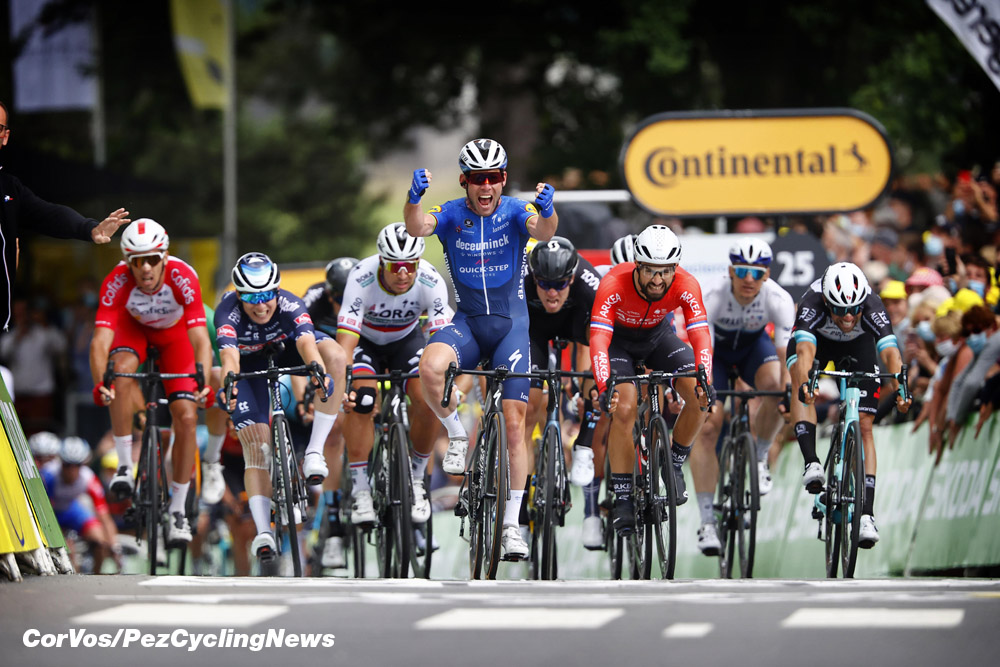 Overall leader, Mathieu van der Poel (Alpecin-Fenix): “I enjoyed the yellow jersey very much today. There was a nice weather and lots of spectators on the roadside. Of course we would have liked to win the stage. We worked hard for our sprinters, but it doesn’t always work out like planned. [Brent] Van Moer is such a strong cyclist. We knew what he was capable of because we had seen his performances in other races, like the Critérium du Dauphiné. What a strong ride he pulled off today! Tomorrow’s ITT is one for the specialists. I will try to do my best to keep the yellow jersey, but it won’t be easy. Wout van Aert, for instance, is a very strong time-triallist. TTs are something I don’t work that much on.” 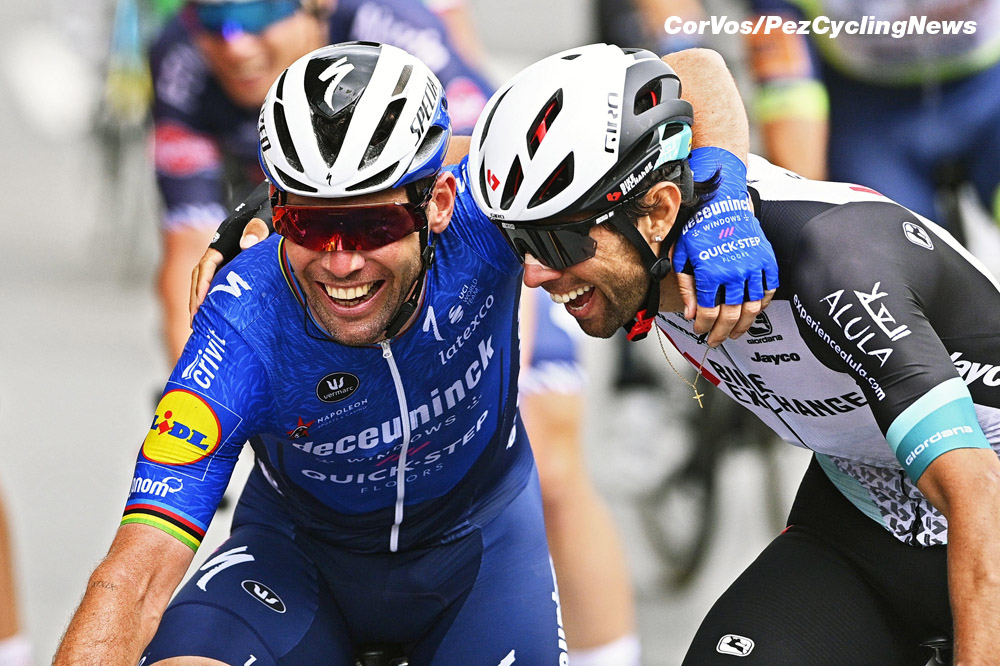 Everyone was happy for ‘Cav’