Stage Report: Mathieu van der Poel (Alpecin-Fenix) rode the time trial of his career to hold on to his yellow jersey by 8 seconds from stage winner Tadej Pogačar (UAE Team Emirates). Many of the top GC men kept their overall dreams alive, but there were some disappointments.

Stage win and second overall at 8 seconds for Tadej Pogačar

Tadej Pogačar struck a significant blow in the battle for the general classification of the Tour de France. In Laval, the Slovenian of UAE Team Emirates won the individual time trial and dealt a blow to the competition. Mathieu van der Poel managed to limit his loss to keep the yellow jersey.

– The final kilometre of Stage 5 and read our full report and pics below:- 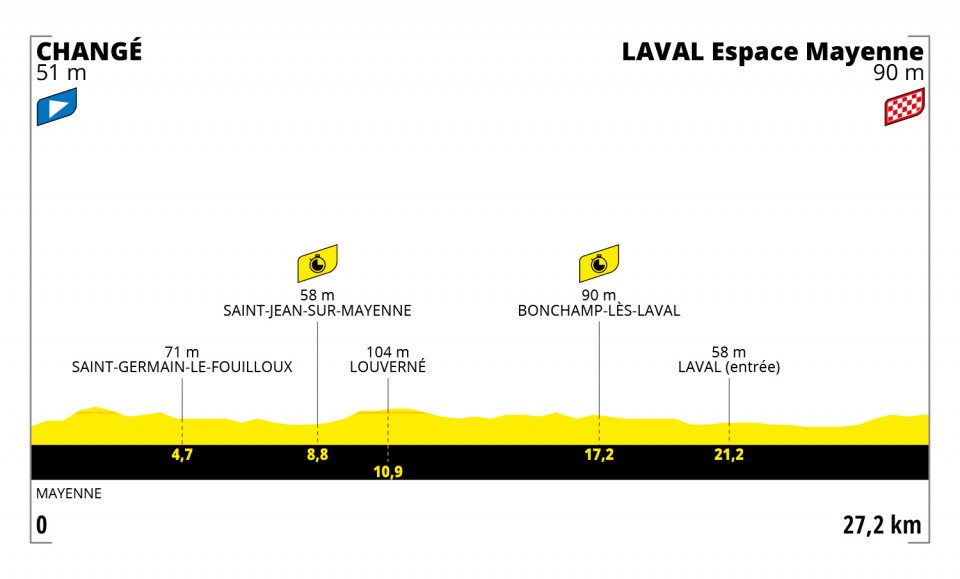 Tour boss Christian Prudhomme describes stage 5: “The first week of the Tour hadn’t offered such a long individual time-trial since 2008, year of the last Grand Départ in… Brest! Geography commanded to break an eventual litany of flat stages and this gift to the time-trial specialists shows our will to vary the scenario and reshuffle the established positions.” 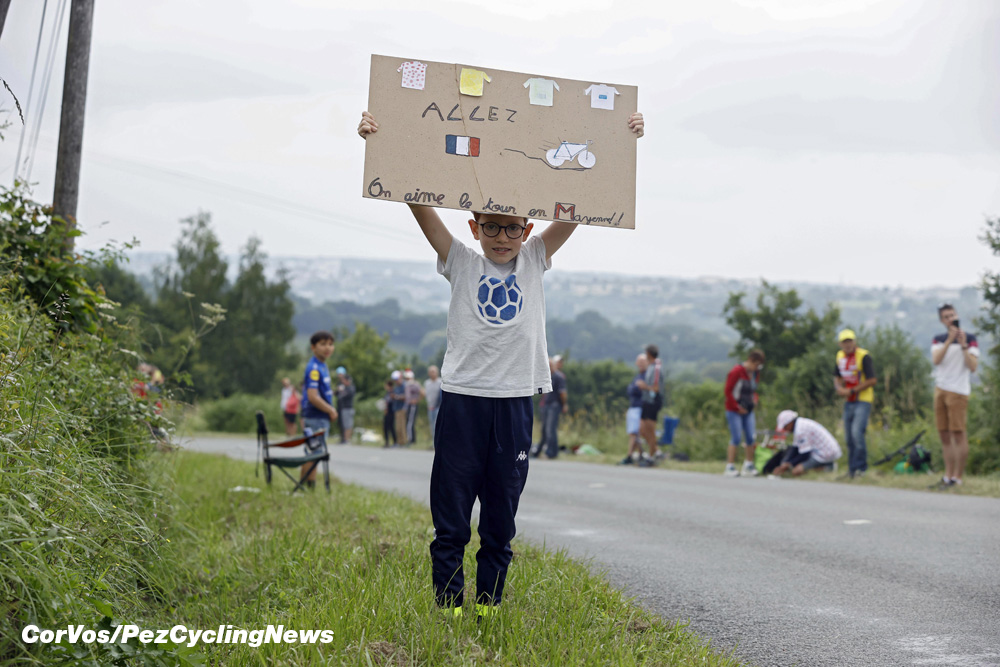 A young fan that knows how to hold a sign. The lady from the stage 2 crash has been arrested 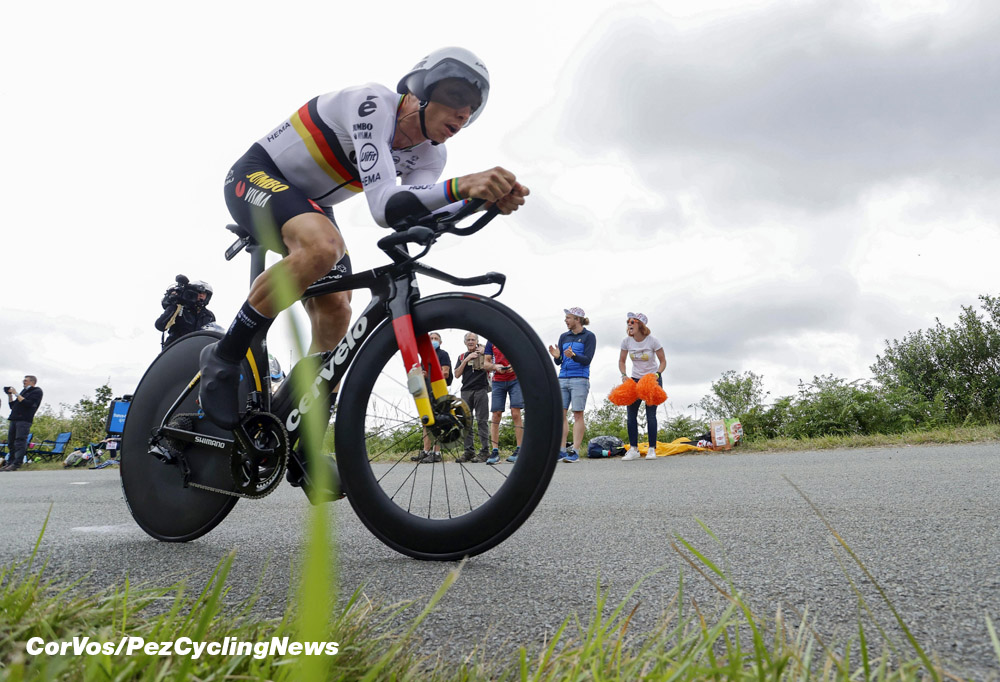 Tony Martin – German champion, but not the TT king he used to be

After four days, the Brittany region said ‘au revoir’ to the Tour as it moved into the Mayenne. Stage 5 was an individual time trial from Changé to Laval. There were several short climbs and some longer stretches of false flat. Yet it was a course made for real specialists. Men like Wout van Aert, Stefan Küng and Stefan Bissegger, who won a time trial in Paris-Nice this year, were among the top favourites for the stage victory. The other question was whether Mathieu van der Poel would still have the yellow jersey on his shoulders at the end of the day. He would ride with wheels that are also used by INEOS Grenadiers. 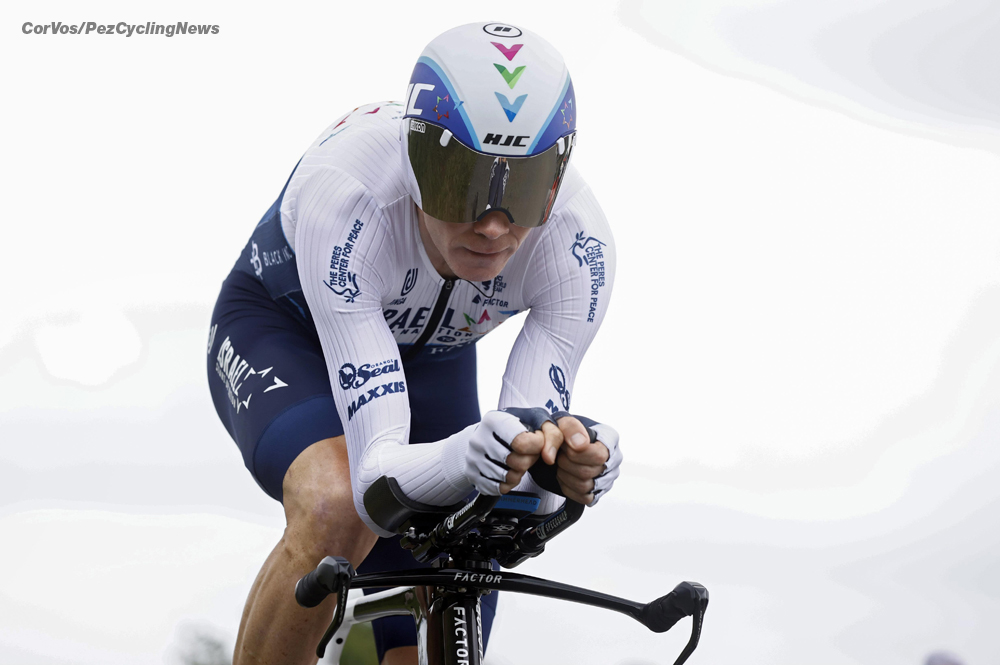 No pressure on Chris Froome today

Amund Grøndahl Jansen kicked off the time trial as the last rider on the standings. The Norwegian of the BikeExchange team set the first time of 37:04. He could not enjoy the top time for long, as Clément Russo went faster. Still in the first stages, the fastest time went to Marco Haller and four-time World champion Tony Martin. The German champion finished in 35:33. It turned out to be the prelude to fast times by his teammates Mike Teunissen and Sepp Kuss, who was the first to go faster than 48kph with 33:57. 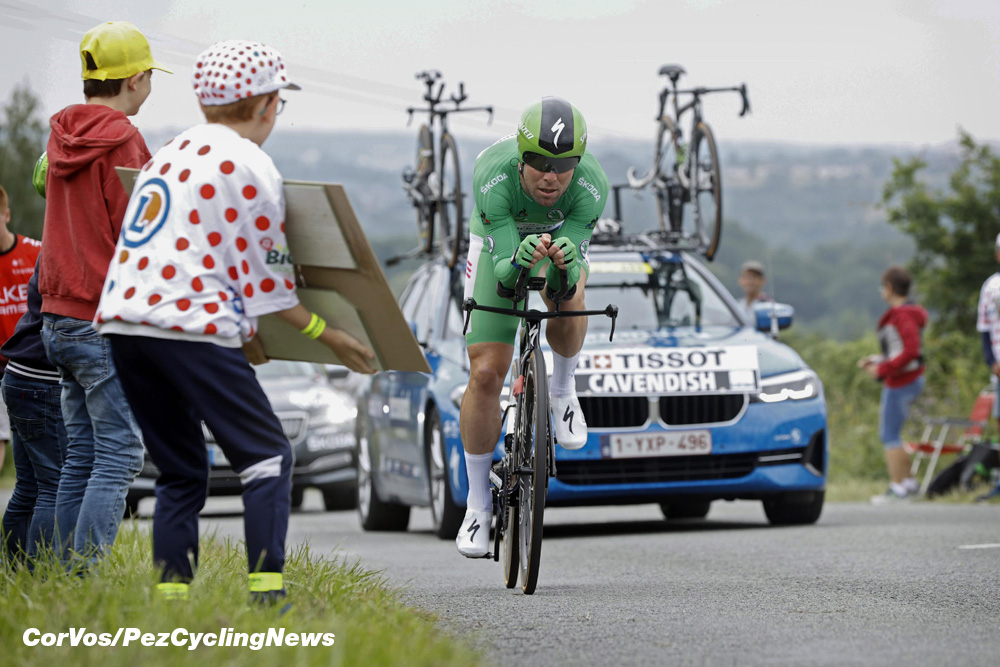 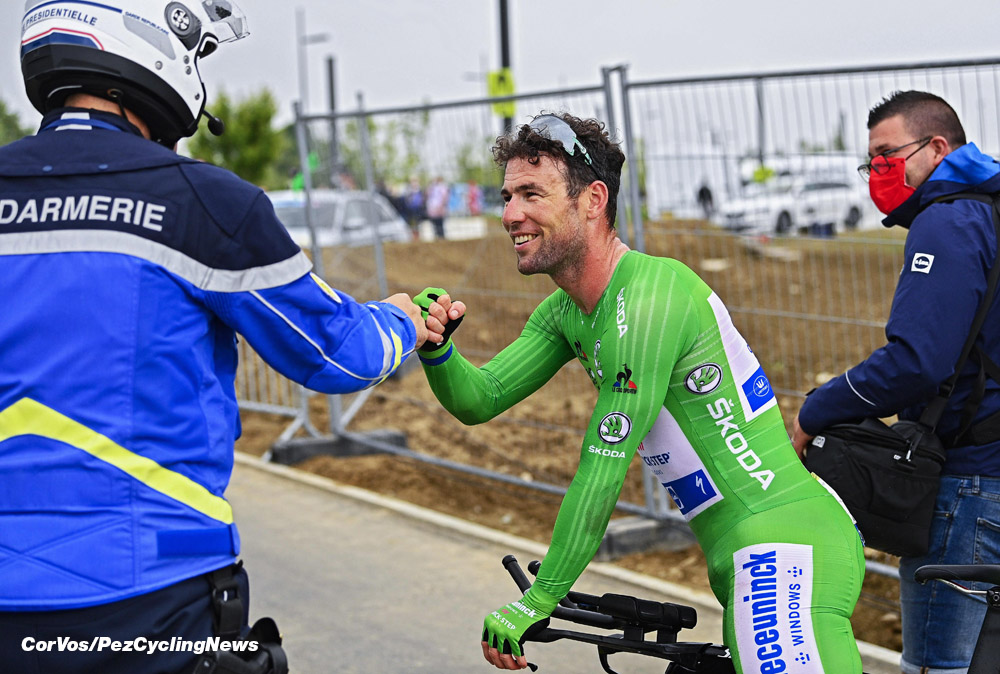 Harry Sweeny went a little faster. The Australian neo-pro of Lotto Soudal raced to a finishing time of 33:53. At that time, Mikkel Bjerg was already well on his way. The triple U23 World champion improved the fastest time to 33:01. After good times at the two intermediate points, Thomas De Gendt finally crossed the line in 33:57. The early riders had damp roads, but after two hours it started to rain heavily. Victor Campenaerts and Jonathan Castroviejo, among others, had very wet conditions. 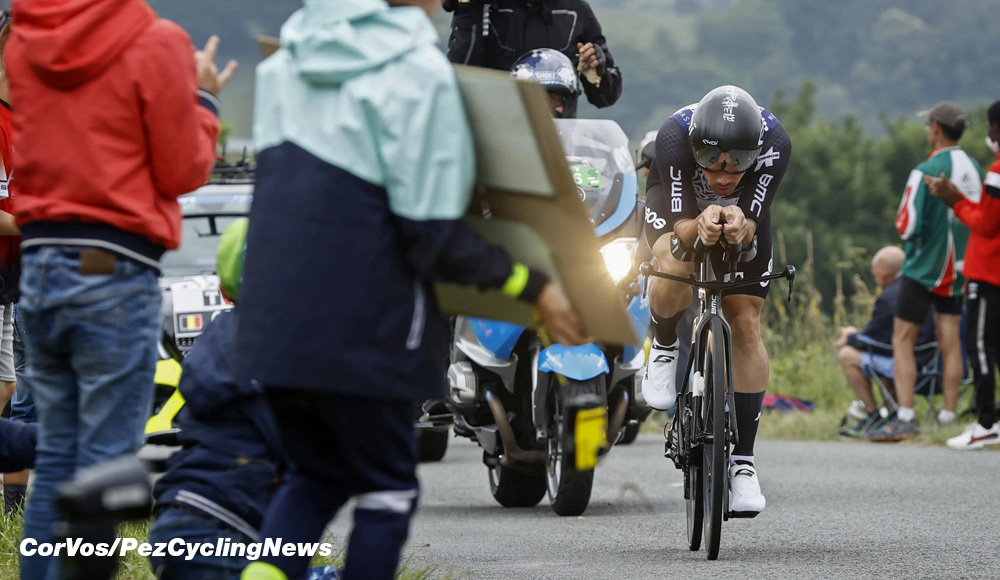 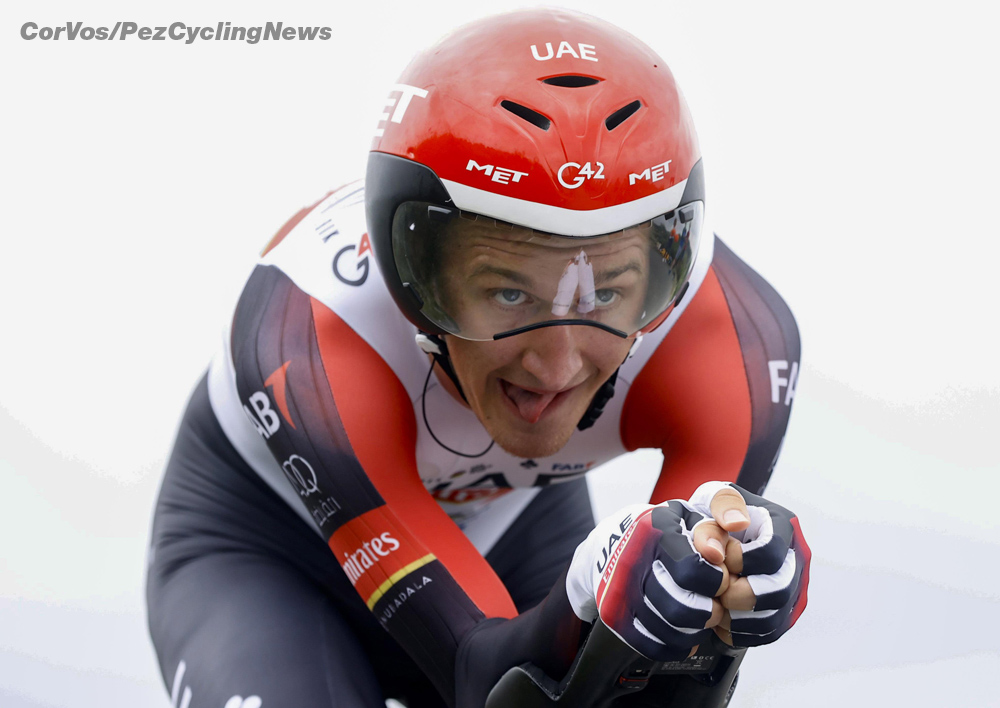 Stefan Bissegger was another contender for the stage victory. However, after 7 minutes, the Swiss EF Education-Nippo rider slipped in the rain. His bike went sideways, but he managed to stay upright. Another contender for the win, Brandon McNulty, did hit the tarmac, had to change bikes and was able to forget a fast time. Bissegger recovered well after his skid, but was no faster at the finish than Bjerg, who had been in the hot seat for a long time. The Swiss rider clocked the second best time with 33:22. 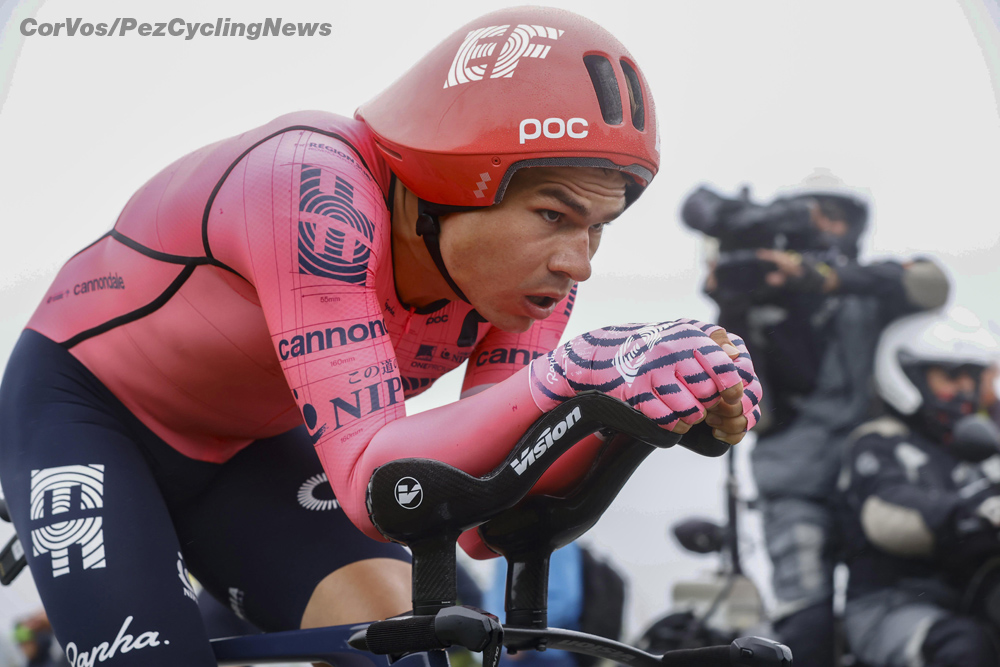 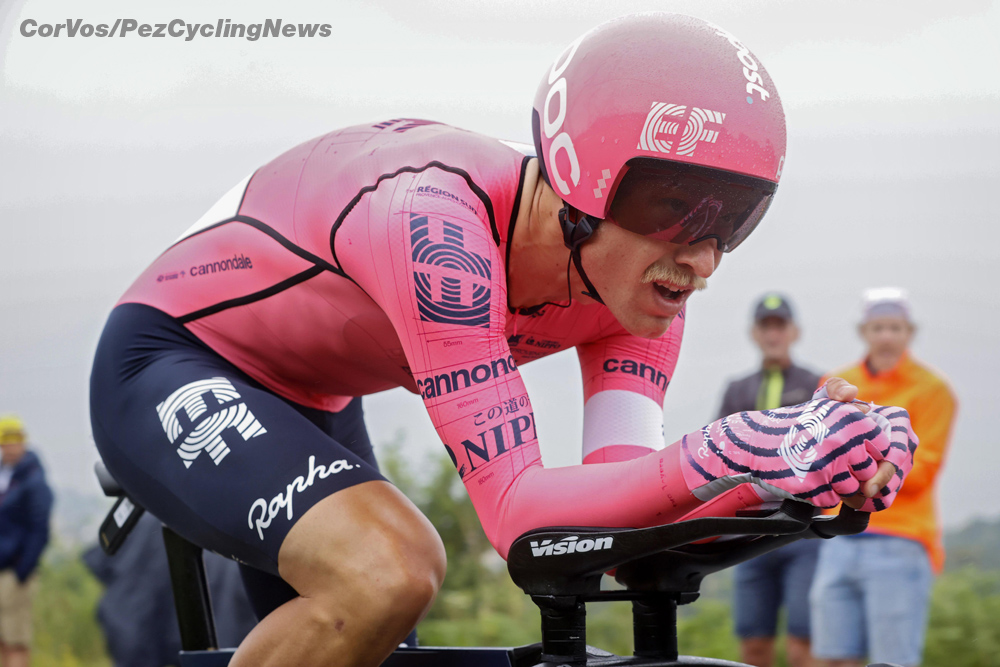 Bjerg saw one rider after another falling short, including his compatriot Magnus Cort. However, the Dane of EF Education-Nippo, who is often good at difficult time trials, came out strong and only lost 6 seconds. He was faster than his teammate Bissegger. In the meantime the weather became drier and the times at the first intermediate point also went up. First Mattia Cattaneo was faster than Bjerg after 8.8 kilometres, Neilson Powless was even better. But where Powless then lost a lot of time, Cattaneo held out and after a strong finish and a finishing time of 32:55 he took over the hot-seat. 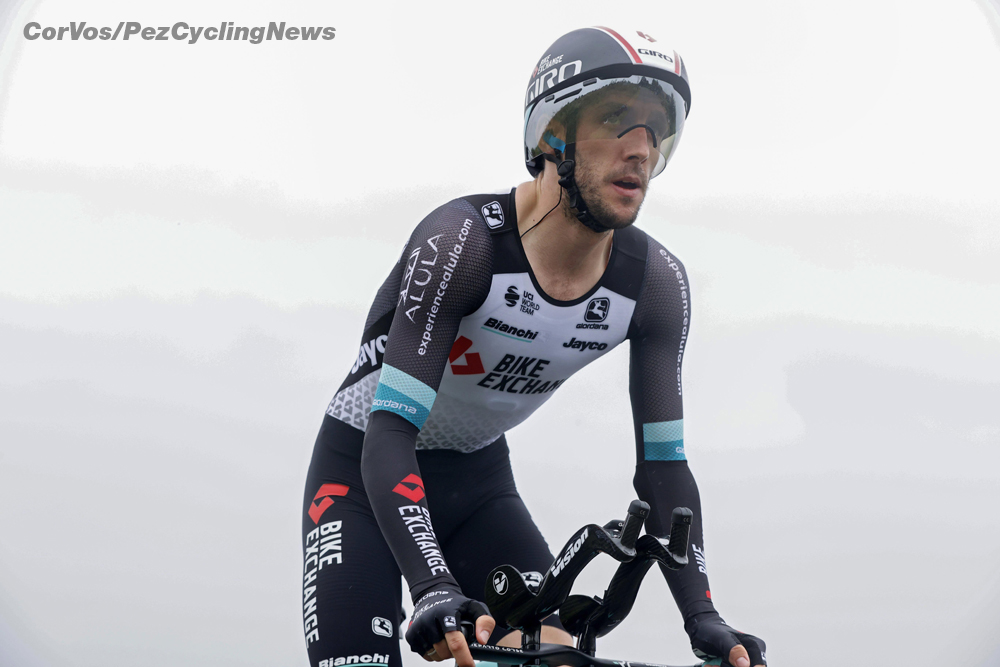 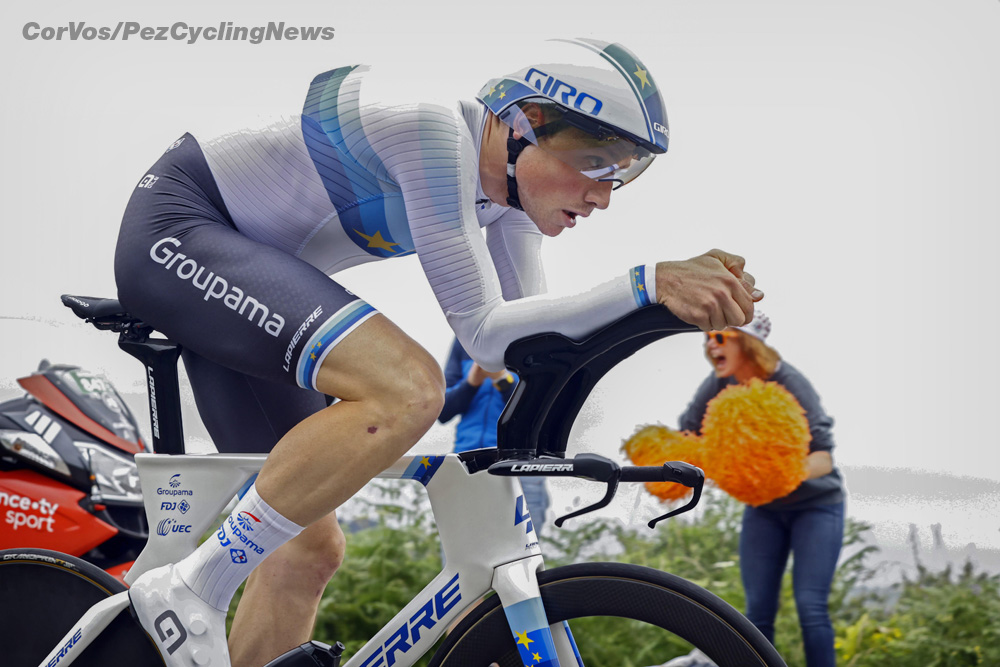 Cattaneo would not be at the top of the results list for long. European champion Stefan Küng was a lot faster at the intermediate points and at the finish he crushed the time of the Italian of Deceuninck – Quick-Step with 32:19. The Groupama-FDJ rider was the first to go faster than 50kph. Küng won a team time trial in Cholet with BMC in the Tour, but he has not yet achieved individual success. He was looking good for the stage victory, but after him a whole series of riders still had to cross the line in Laval. 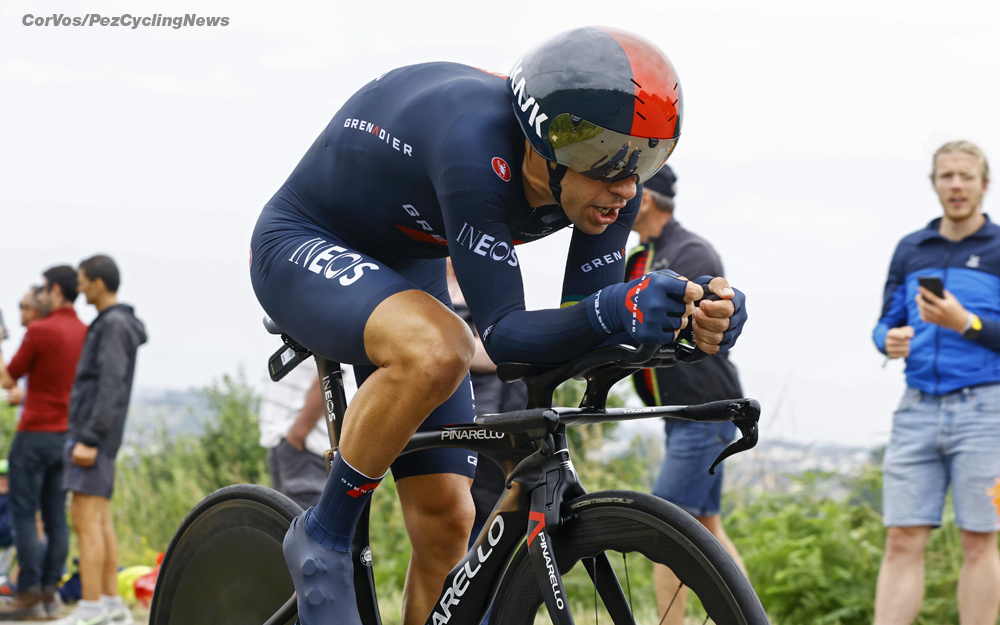 A fair ride from Richie Porte 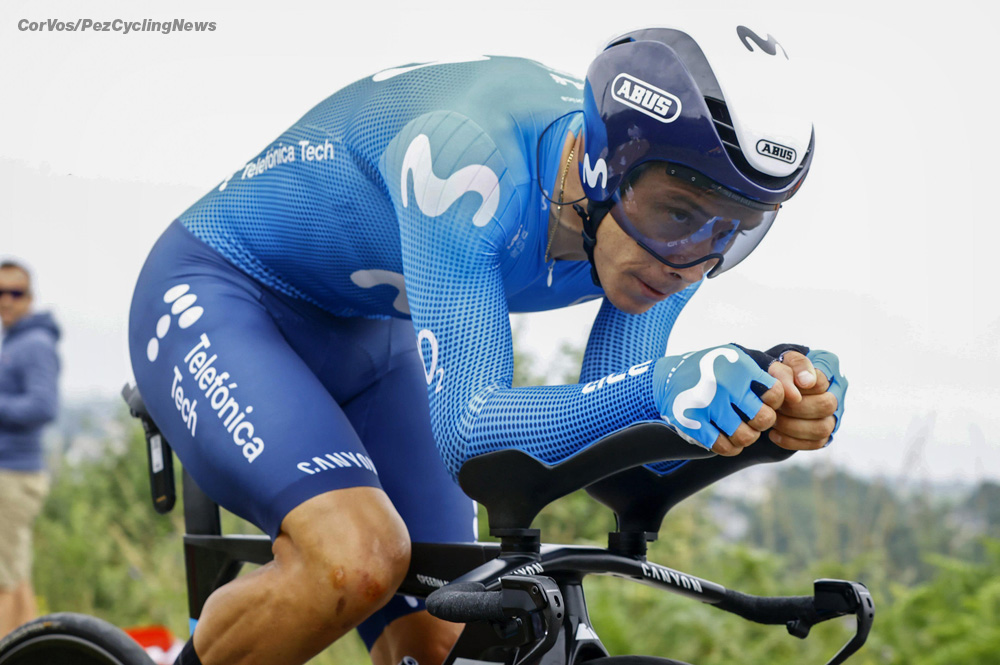 Despite a fast start, Jonas Vingegaard and Kasper Asgreen were unable to push Küng out of the hot seat. Vingegaard became the provisional second, Asgreen third. Then we had to wait for the arrival of Primož Roglič and Geraint Thomas, both had hit the ground hard in recent days. Despite all his injuries, Roglič rode a good time trial and clocked 32:44; Thomas took more than half a minute longer in his time trial and had a final time of 33:18. Rigoberto Urán, who rode a great time trial in the Tour of Switzerland, settled between the two riders with 33:08. 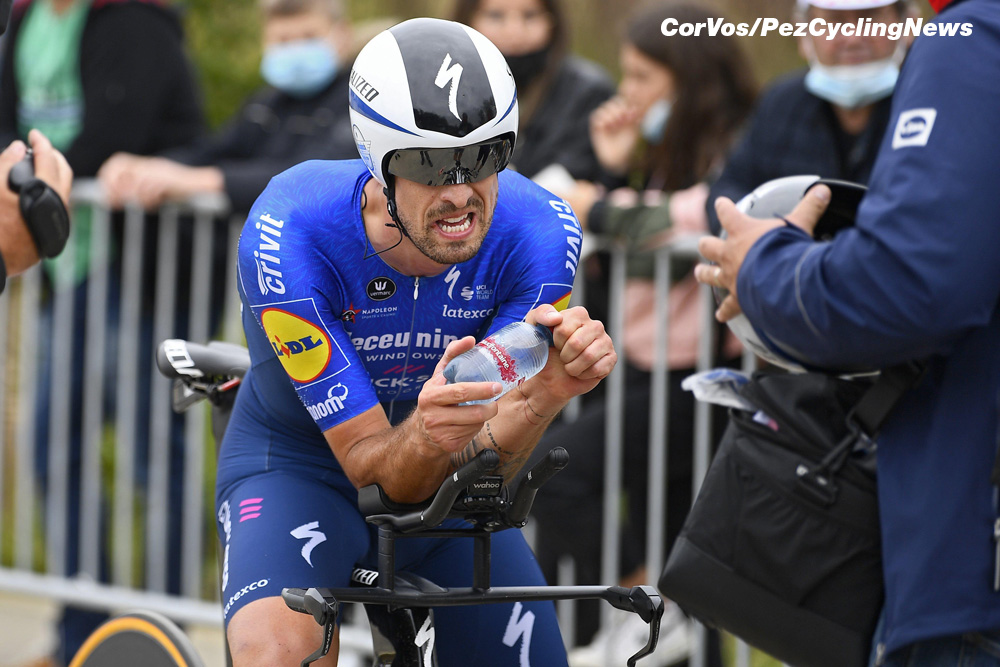 32:55 for Mattia Cattaneo (Deceuninck – Quick-Step) 2nd at that time 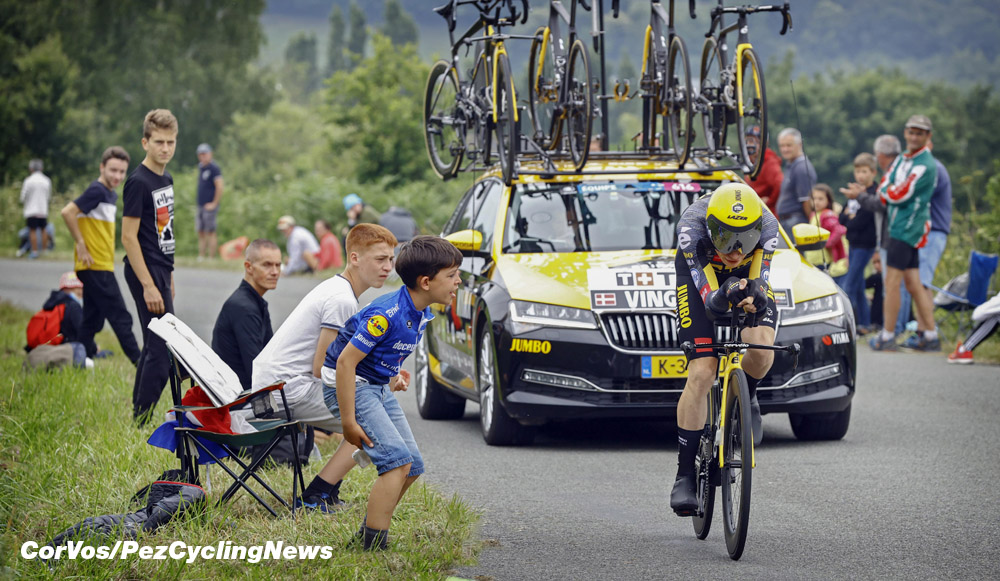 All the riders were on their way. Tadej Pogačar, the defending Tour winner, gave an important signal to the opposition at both the first and second intermediate points. After clocking the fastest time after 8.8 kilometres with 10:38, he was fastest again after 17.2 kilometres with 20:04. In the meantime Mathieu van der Poel was also well on his way. The yellow jersey wearer was tied with Wout van Aert at the first and second intermediate points. After 27.2 kilometres Pogačar stopped the clock at 32:00. Then only Wilco Kelderman, Van Aert, Richard Carapaz, Julian Alaphilippe and Van Aert still had to finish. 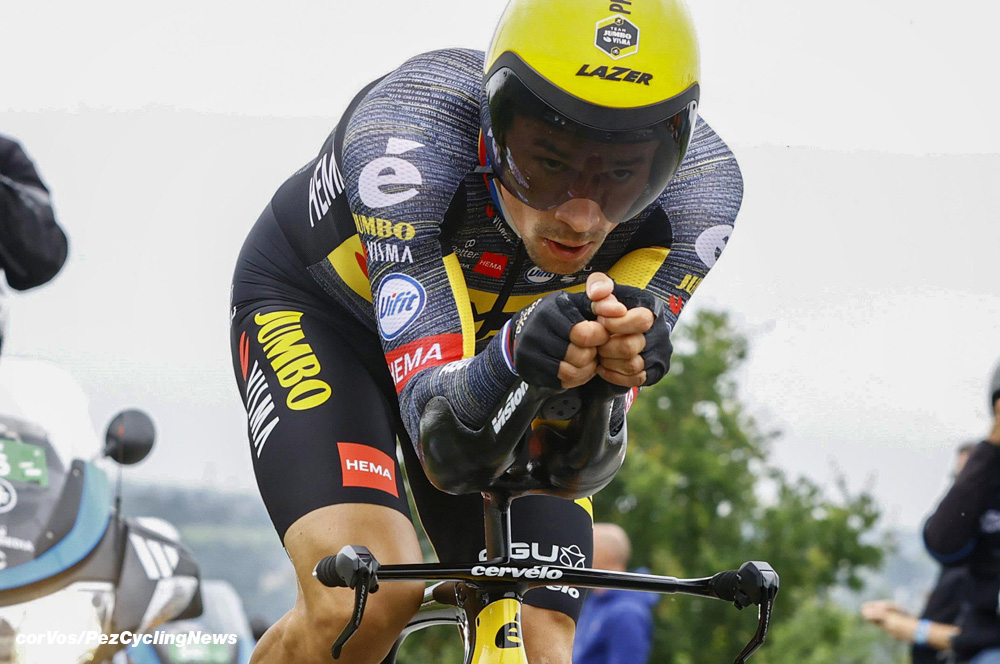 An injured Primoz Rogloč put up a good time of 32:44 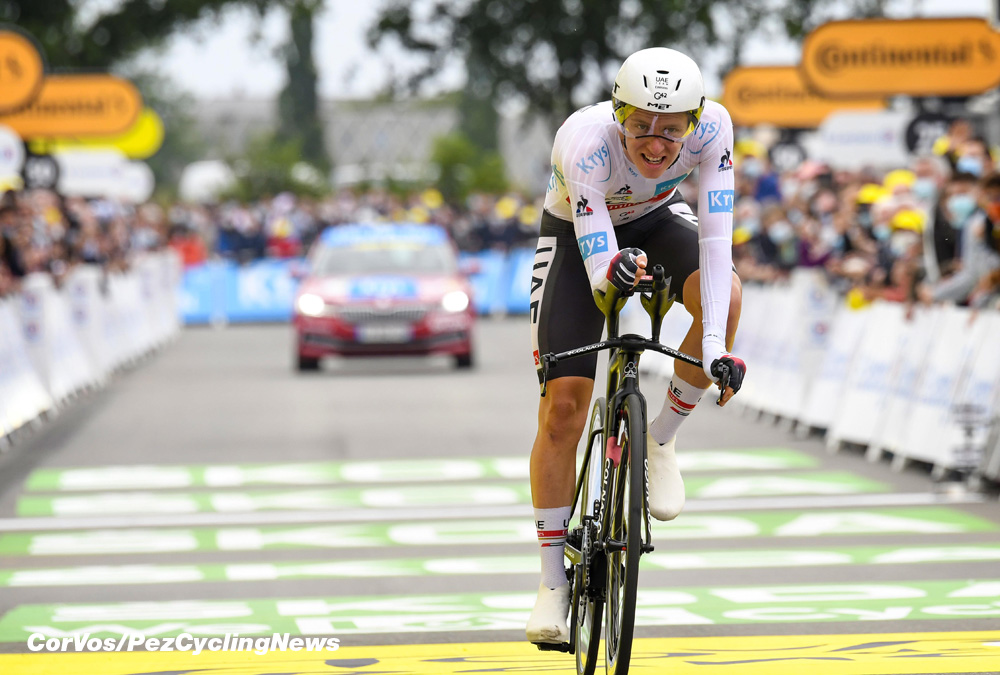 32 minutes dead for the winning ride from Tadej Pogačar

Kelderman rode a disappointing time trial and finished outside the top 20. Van Aert then had to give in to Pogačar for half a minute and with that Vingegaard surprisingly became the best rider for Jumbo-Visma. Carapaz crossed the finish line in 33:44 and was slightly faster than Kelderman. Alaphilippe had to fight hard and would not win a time trial in this Tour, just like two years ago. Van der Poel managed to keep his loss against Pogačar well within limits. With 32:31 and a 5th place, he defended his yellow jersey. 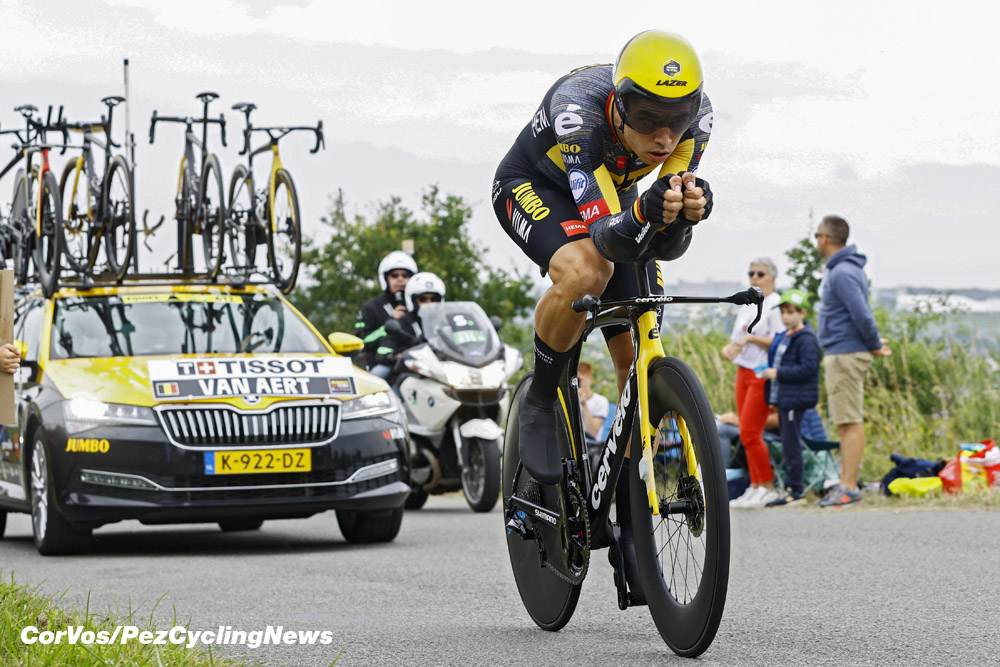 4th on the stage for Wout Van Aert 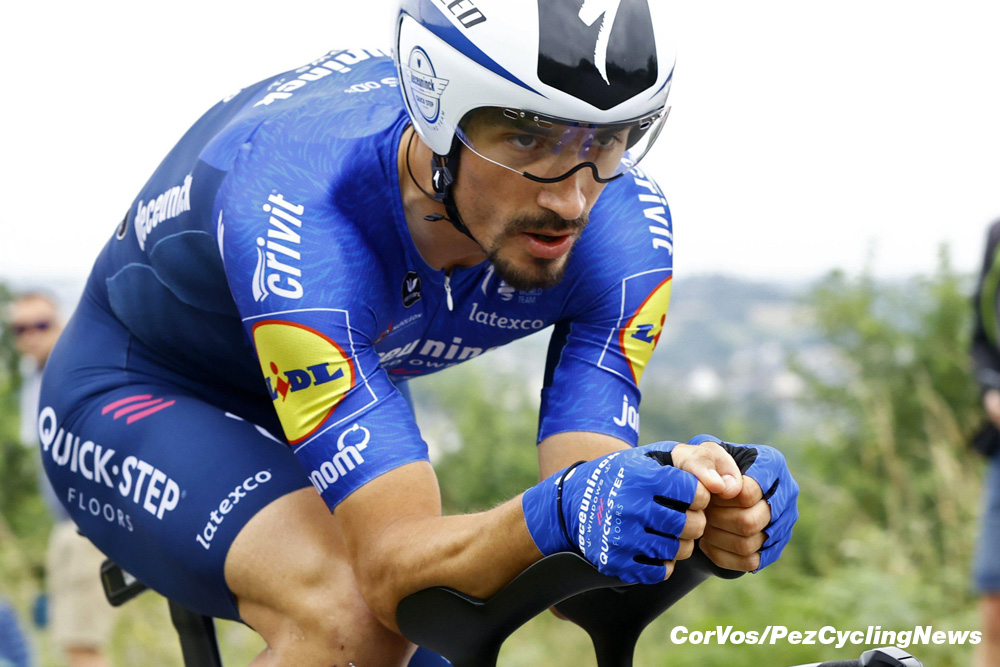 Stage winner and second overall, Tadej Pogacar (UAE Team Emirates): “Today was a very good day. I didn’t make any mistakes and the weather was perfect for me. Some guys had to ride in the rain, but luckily the conditions were perfect for me, as was the temperature. So it was a really good day. The last few time trials I kept making the mistake of starting too fast. With the short climb I was able to immediately find a good pace here and then maintain the perfect rhythm until the end. The goal was not to lose any time and I just got time. I’m super happy and I’m looking forward to the rest of the Tour. Am I glad that I am not yet responsible for the yellow jersey? Maybe it’s better, I don’t know. I love having the yellow, but the jersey also looks great on Mathieu. So it’s okay.” 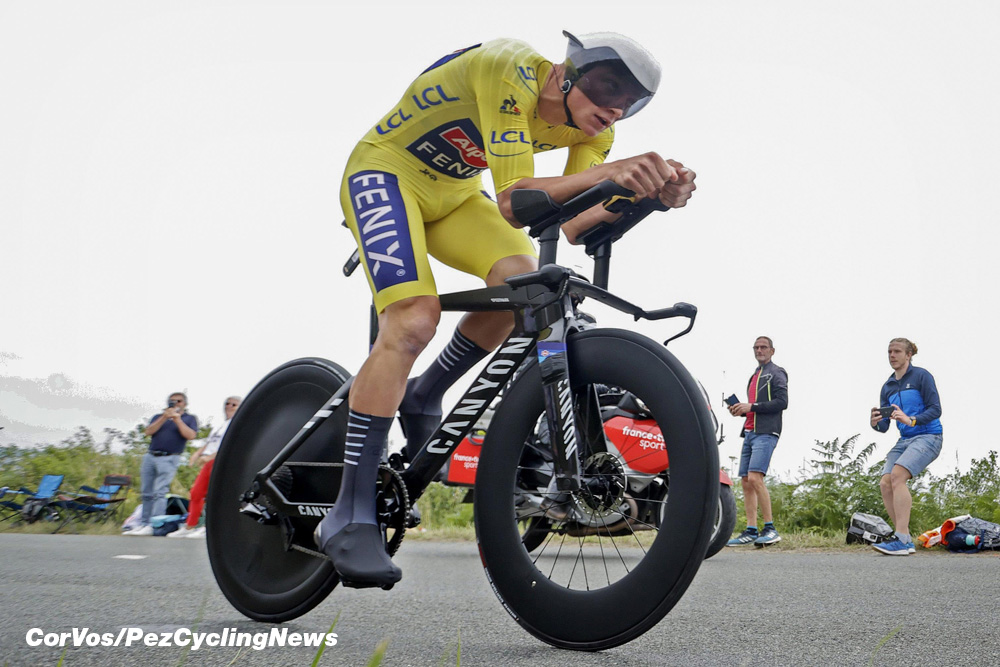 Overall leader and 5th on the stage, Mathieu van der Poel (Alpecin-Fenix): “I have to thank the team. We worked on the bike until midnight to improve my position a bit. It was one of my best days on the bike. I was able to push myself to the limit. I am very proud of myself and the team. That gave me confidence. I saved some energy to fight to the end, because the last few kilometres would be decisive. Luckily I had some left in the tank. I really surprised myself. I am very proud of this achievement. It was not a lie that I said yesterday that I expected to lose the yellow jersey today. After all, time trialling is not my specialty. He (Tadej Pogačar) is a very nice guy, always friendly. It’s phenomenal what he did today. He is one of the big favourites to bring the yellow back to Paris.” 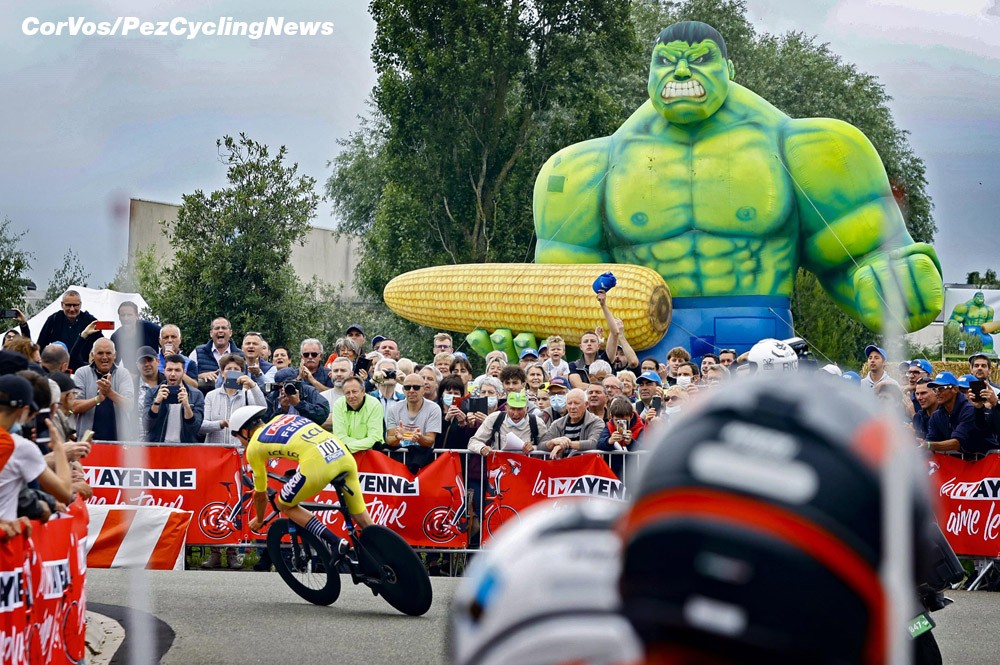