Stage Report: Bahrain Victorious’ Dylan Teuns may have won stage 8, but the ‘hero of the day’ and maybe the 2021 Tour de France was Tadej Pogačar (UAE Team Emirates). The young Slovenian crossed from what was left of the peloton to the front of the race, a gap of over 6 minutes. Teuns was the only rider he didn’t catch before the finish in Le Grand-Bornand. 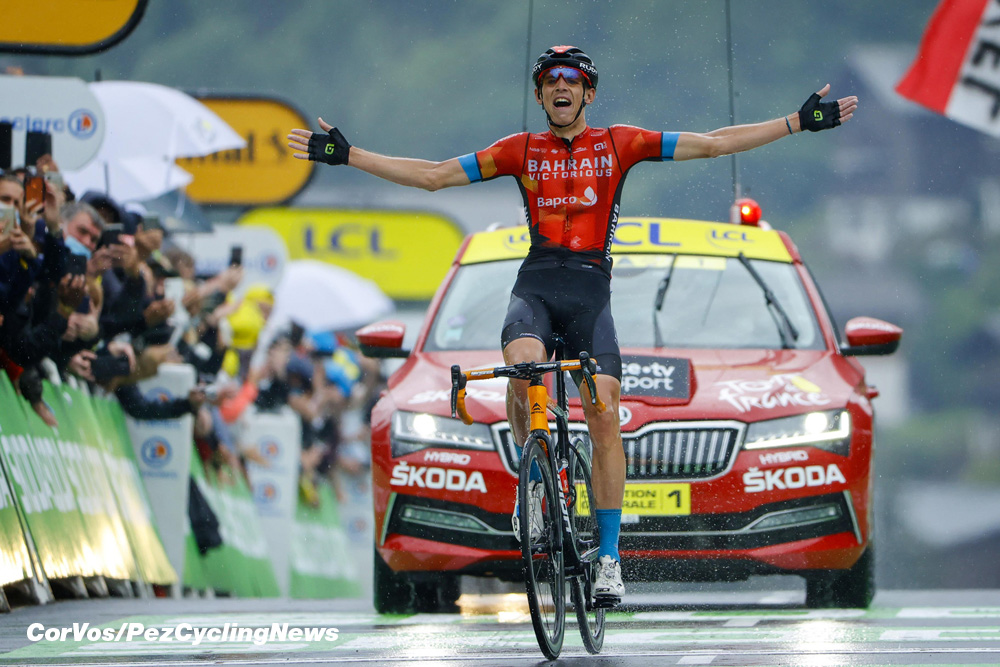 Dylan Teuns – The win for his grandfather

– The final kilometre of Stage 8 and read our full report and pics below:-

Tadej Pogačar showed in the first Alpine stage that he is the best rider in the Tour de France. With an early attack on the Col de Romme, the Slovenian got rid of all his competitors before the finish line in Le Grand-Bornand. He only had early escapee Dylan Teuns ahead of him. Ion Izagirre and Michael Woods managed to hold Pogačar to finish just ahead of him. 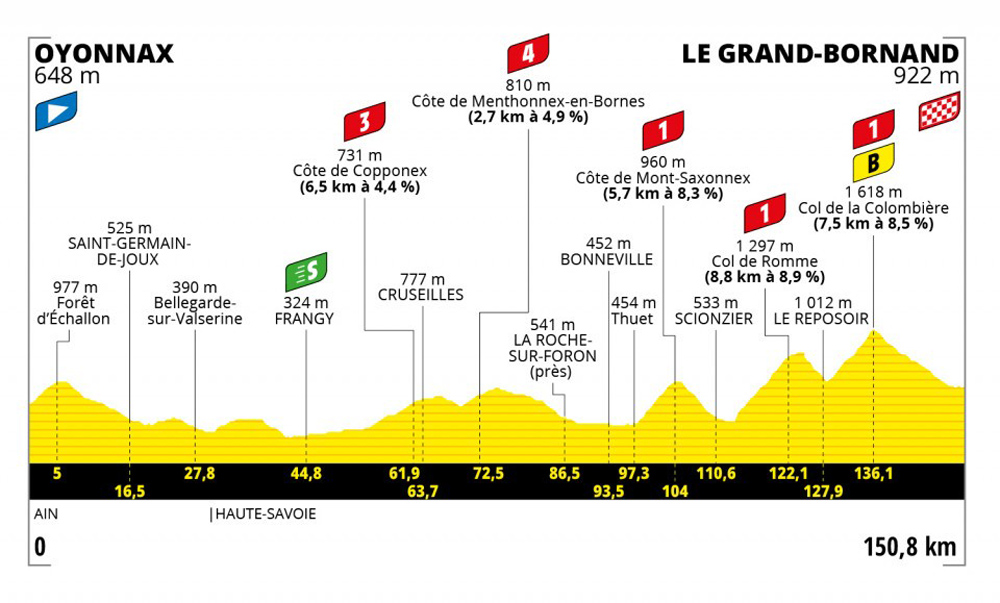 Tour boss Christian Prudhomme describes stage 8: “After 2009 and 2018, the finish at Le Grand-Bornand will once again be conditioned by the Romme – Colombière climbing sequence. But this time it’ll be preceded by the climb up to Mont-Saxonnex (5,7 km at 8,3%) first ascent towards the Plateau de Solaison, and will therefore offer a triple climb on a distance of over 20 kms at close to 9%. Of course it’ll be a day for the best climbers!” 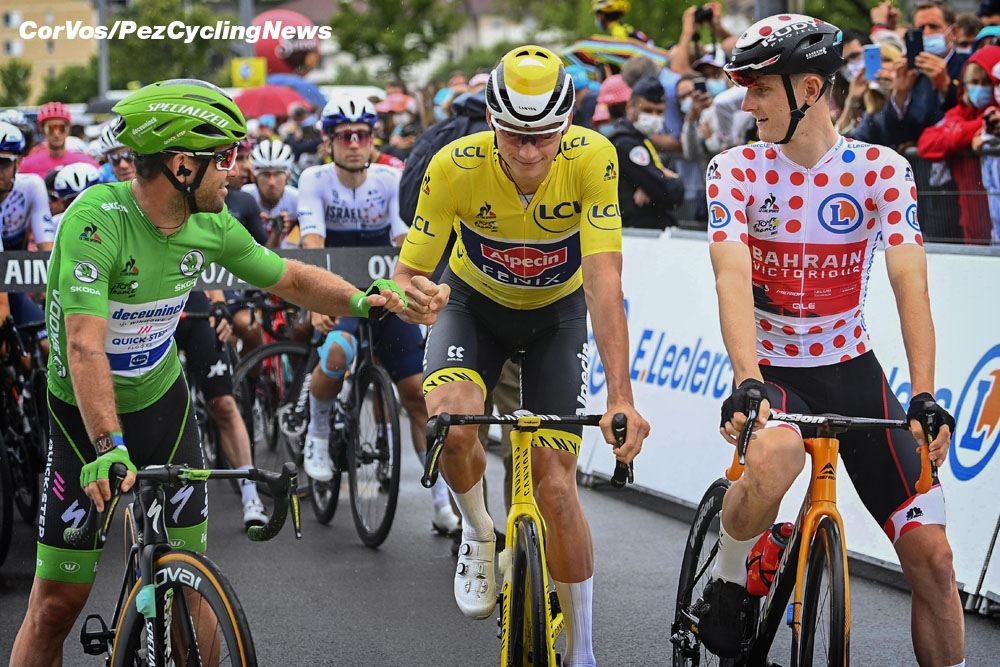 The leaders jersey’s – All change today?

The Tour peloton finally went into the mountains on Saturday. The climbs of the Col de Romme (8.8km at 8.9%) and the Col de la Colombière (7.5km at 8.5%) formed the final part of the stage 8. As in previous days, the riders did not need high cols to provide the action and the early part of the stage showed that once again. Even before the first categorised climb was over, Geraint Thomas, Pierre Latour and Primož Roglič were dropped. 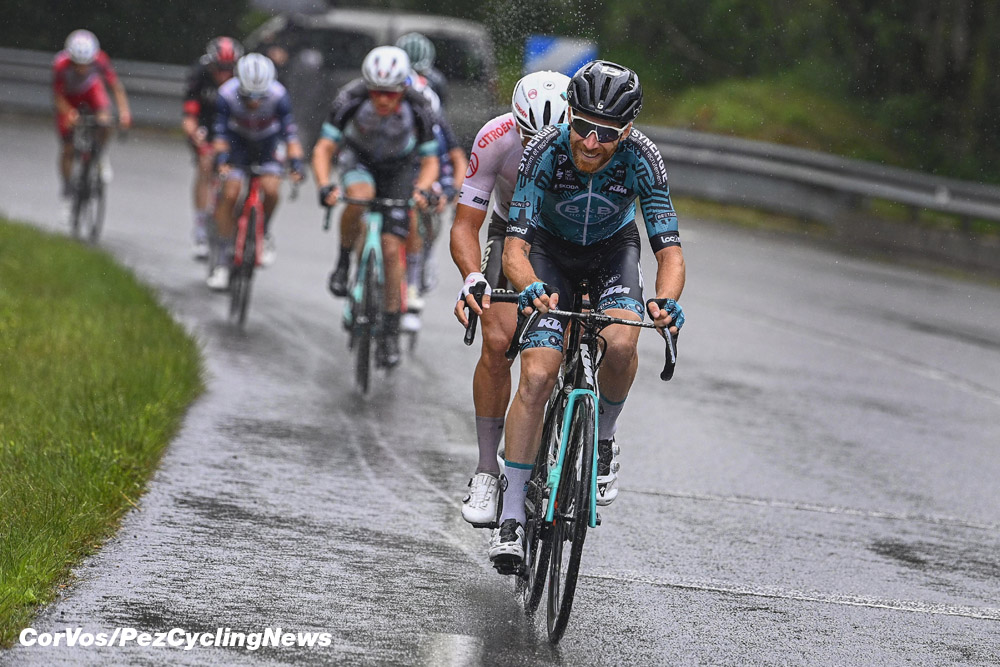 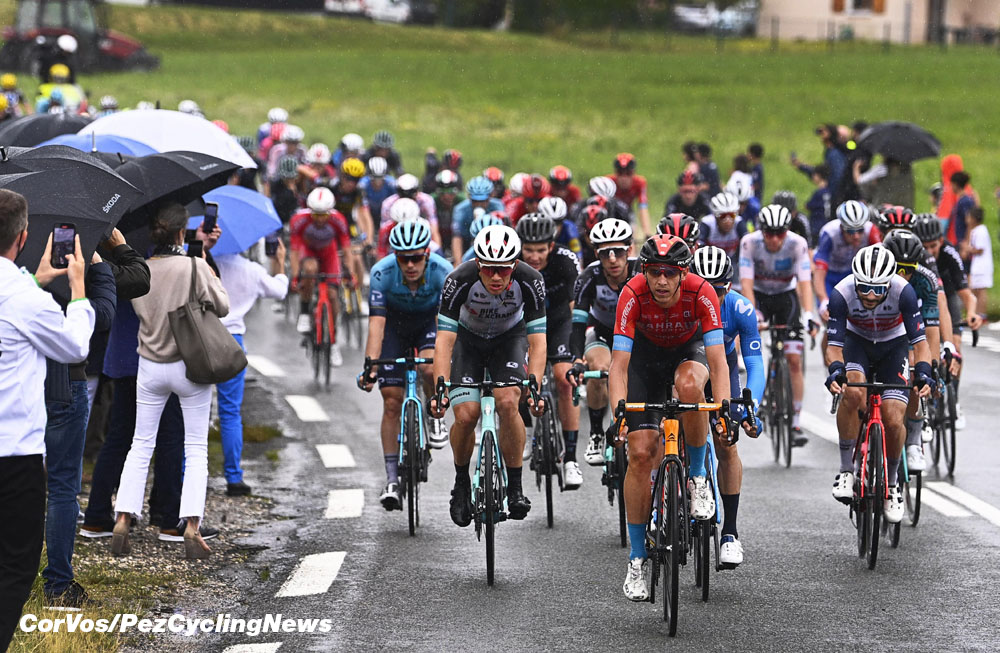 Wout van Aert was at the front of the race trying to see if he could get into yellow, but unlike Friday, Tadej Pogačar’s team was on the lookout. The Jumbo-Visma rider was not given much space. 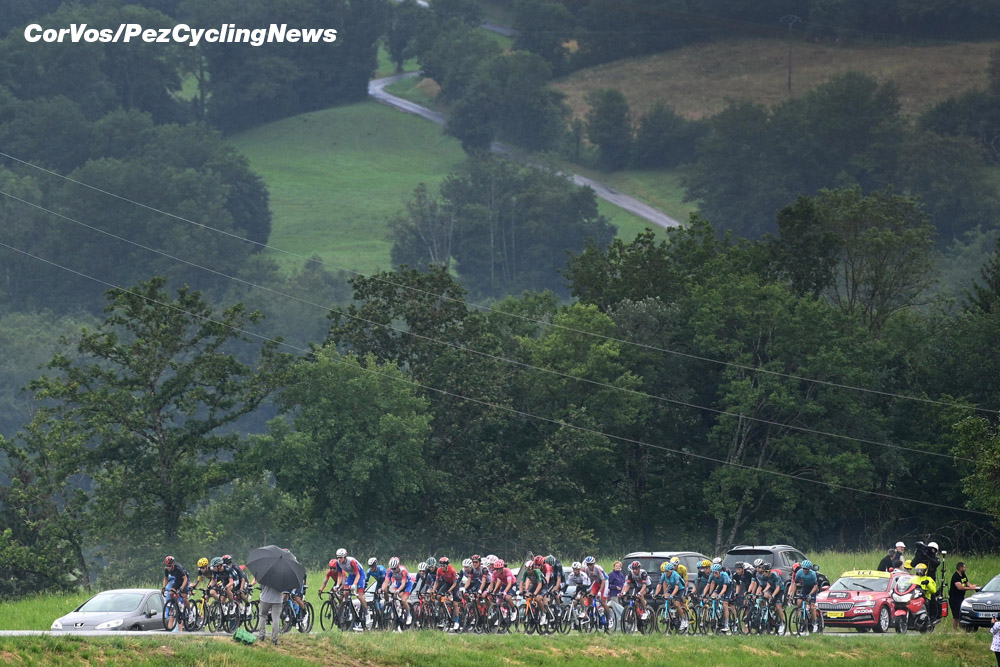 Not a nice day for a bike ride 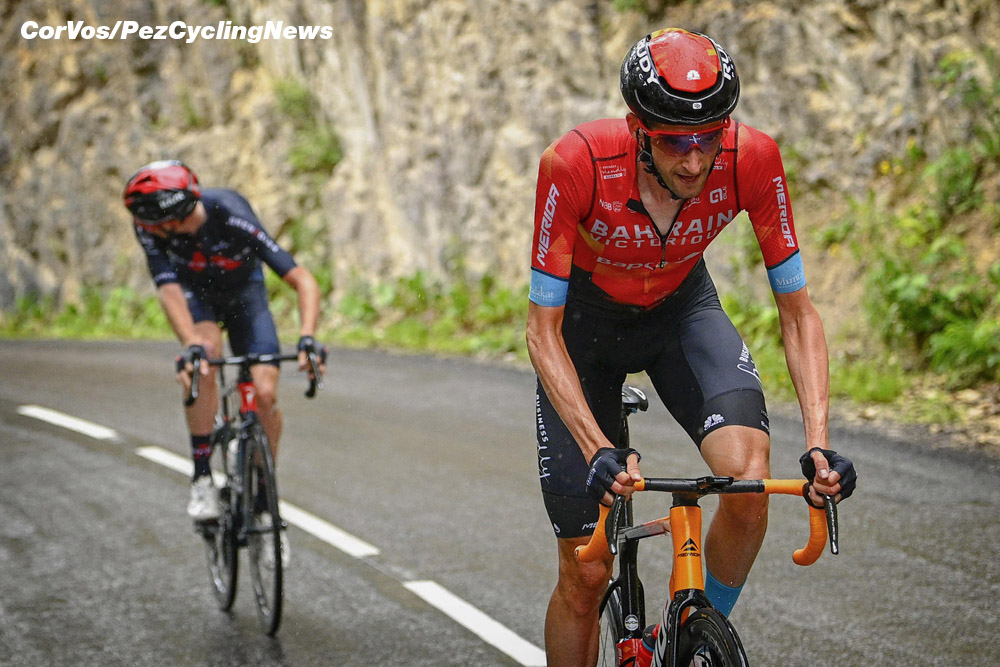 The Slovenian then tried it himself. With a 100 kilometres to go, the white jersey wearer was the best rider in a group that also included Wout Poels, Matej Mohoric, Brandon McNulty, Sepp Kuss, Guillaume Martin, Jakob Fuglsang and Michal Kwiatkowski. The alarm bells went off in time and with the help of Ide Schelling, the peloton closed the gap. Poels then continued solo on the Côte de Copponex. 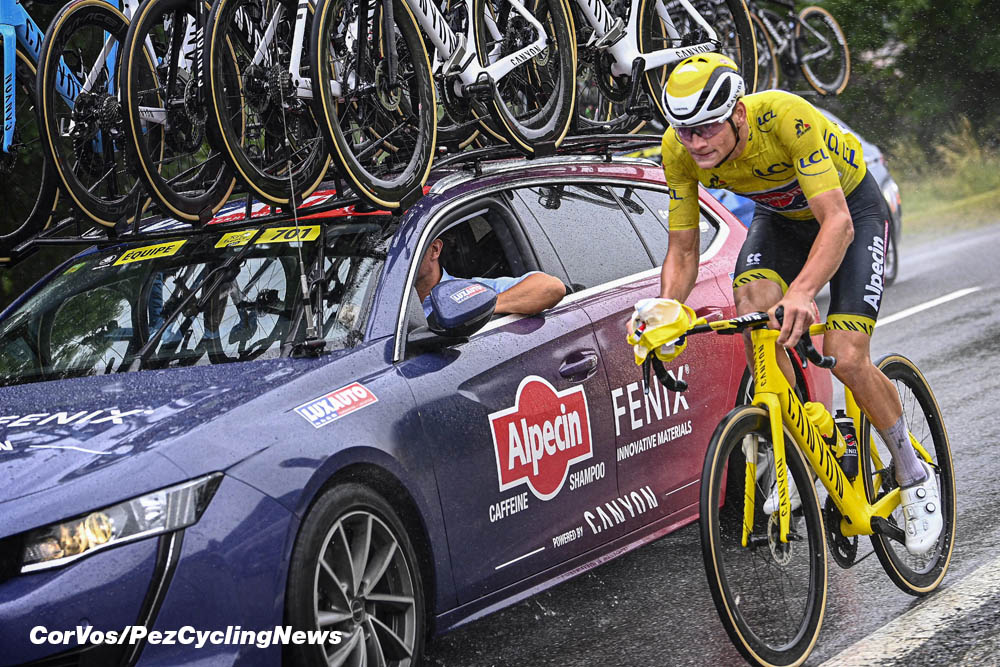 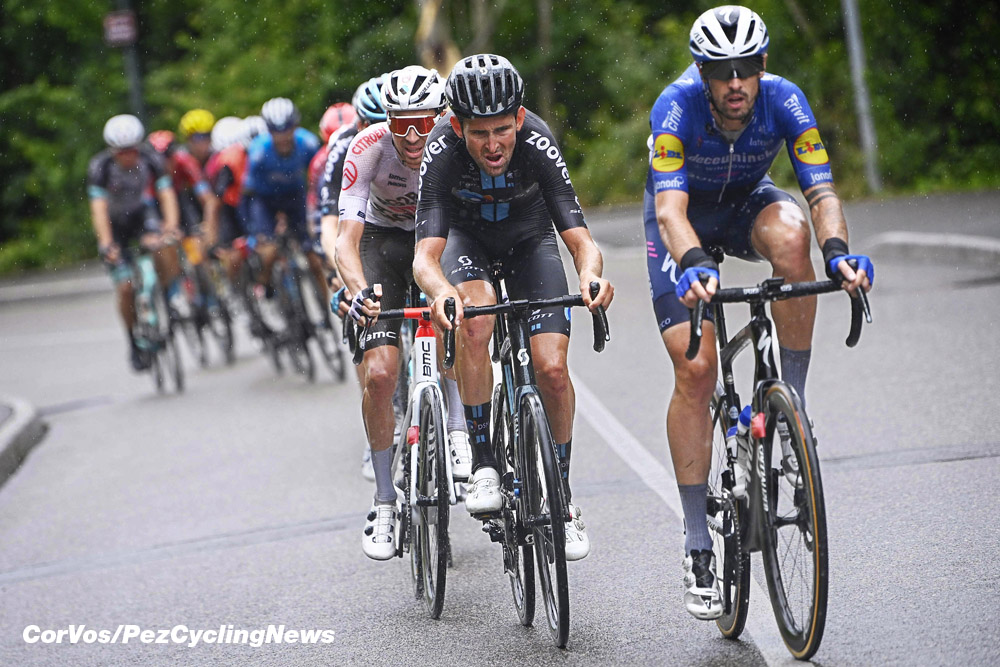 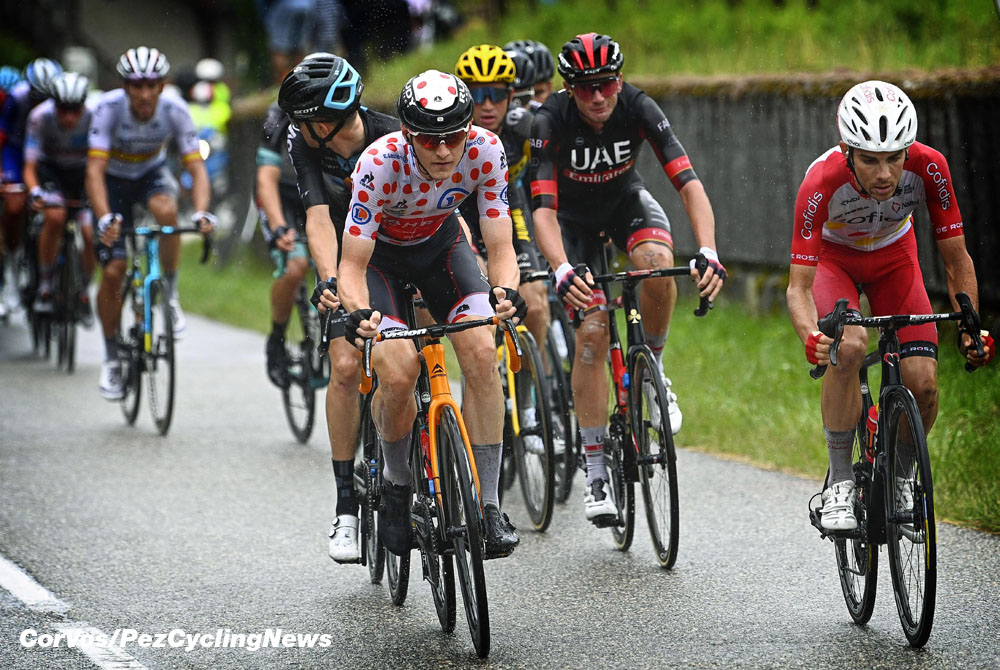 Not as good a day for Mohoric

The peloton let the group go on hunt for Poels, who was 1 minute ahead of the pursuers for quite some time. The Dutchman was only caught again at 55 kilometres from the finish, after a solo ride of 30 kilometres. The Dutchman secured the mountain jersey. 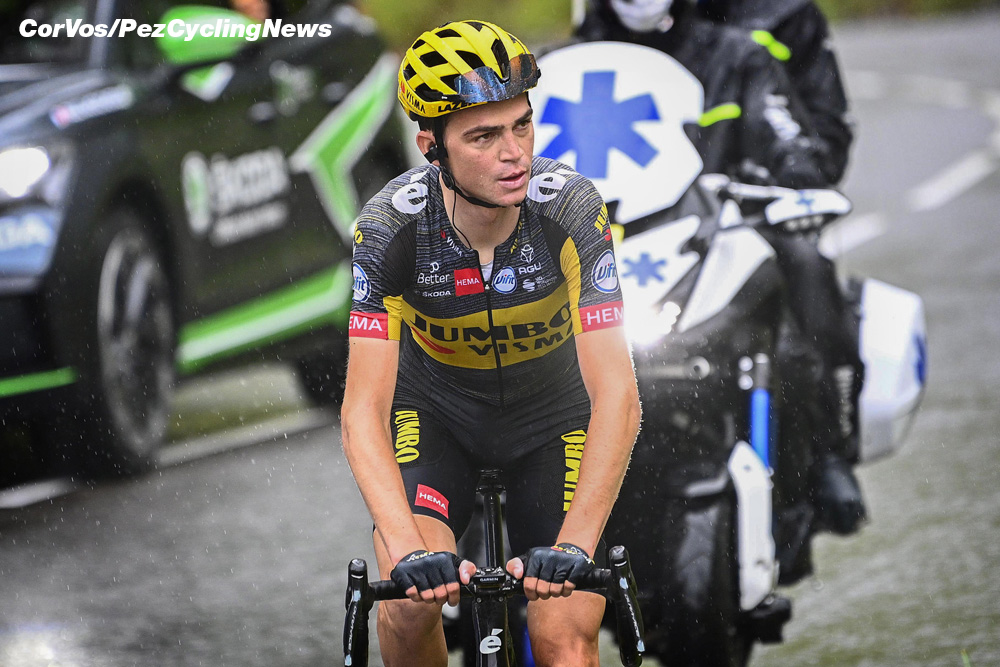 Sepp Kuss gave it a go

The battle for the stage victory could then start as the peloton was now more than 6 minutes behind. Kragh Andersen even took the virtual yellow jersey because of that lead. Just before the Col de Romme, the Dane attacked with Benoot. 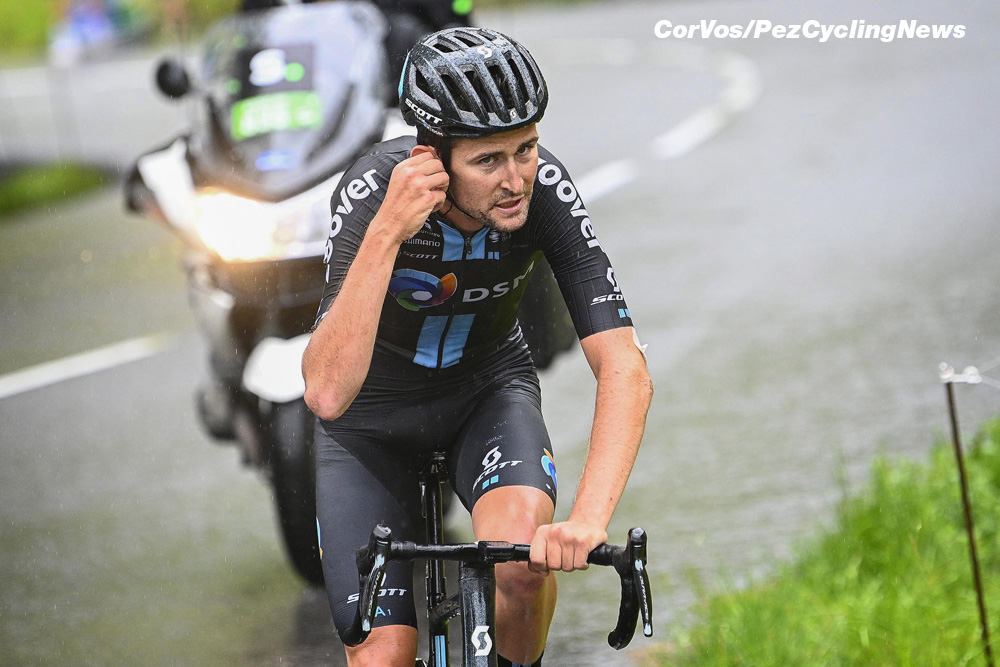 They did not last long. Once on the first category climb, it was the turn of the climbers to tear apart the leading group and catch up with the two riders of the DSM team. Woods was the first to catch them. He was closely followed by the strong-looking Poels, Quintana and Cattaneo. Just before the top they were joined by Martin, Izagirre, Teuns and Yates. 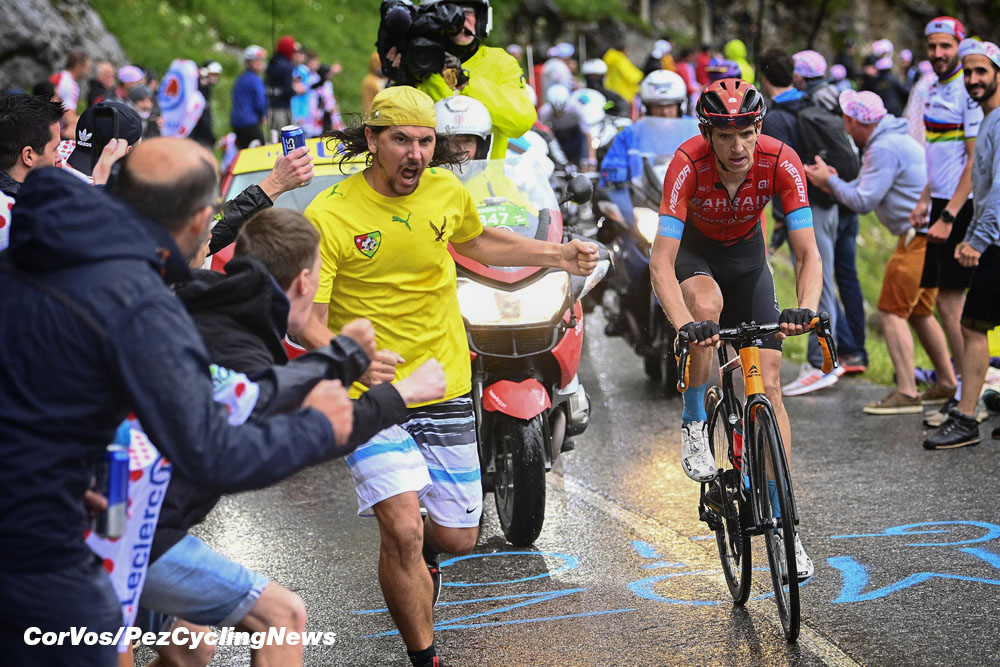 Teuns held off the storming Pogačar

A few minutes behind the front riders, one favourite after another was dropped from the group. Steven Kruijswijk was first, followed by Wout van Aert, Bauke Mollema, Richie Porte and Mathieu van der Poel. Van der Poel quickly lost ground and had to give up his yellow jersey at the end of the day. 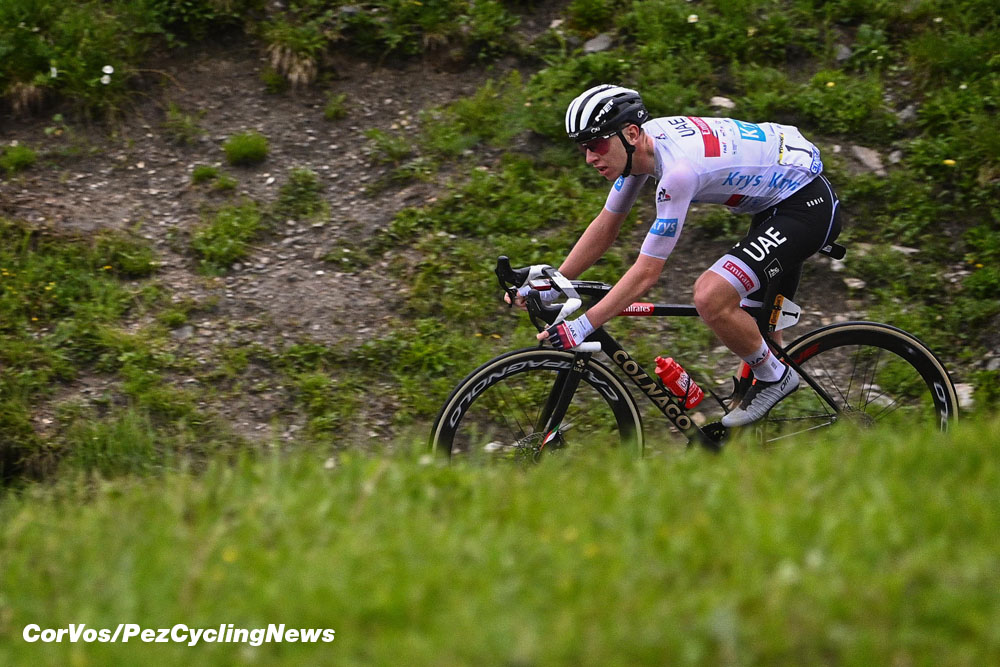 Pogačar rode from the back to the front of the race

Pogačar then decided to kill all his competitors. The Slovenian accelerated 3 kilometres from the top of the Col de Romme, leaving everyone. Richard Carapaz could follow for a moment, but he too would crack. The UAE Team Emirates rider quickly expanded his lead in the last 28 kilometres of the race. 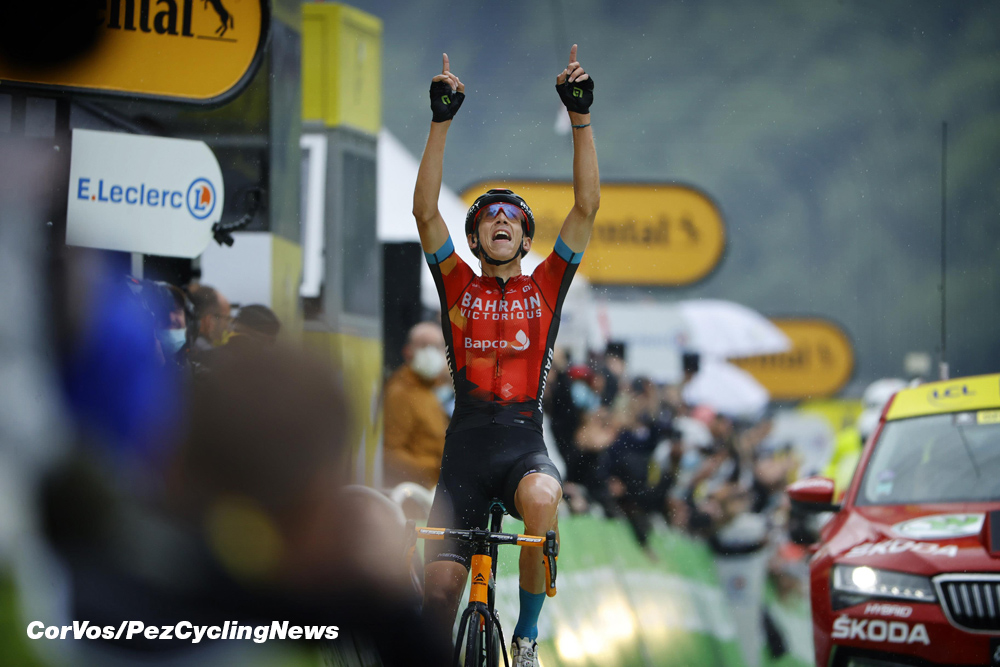 The win for Teuns 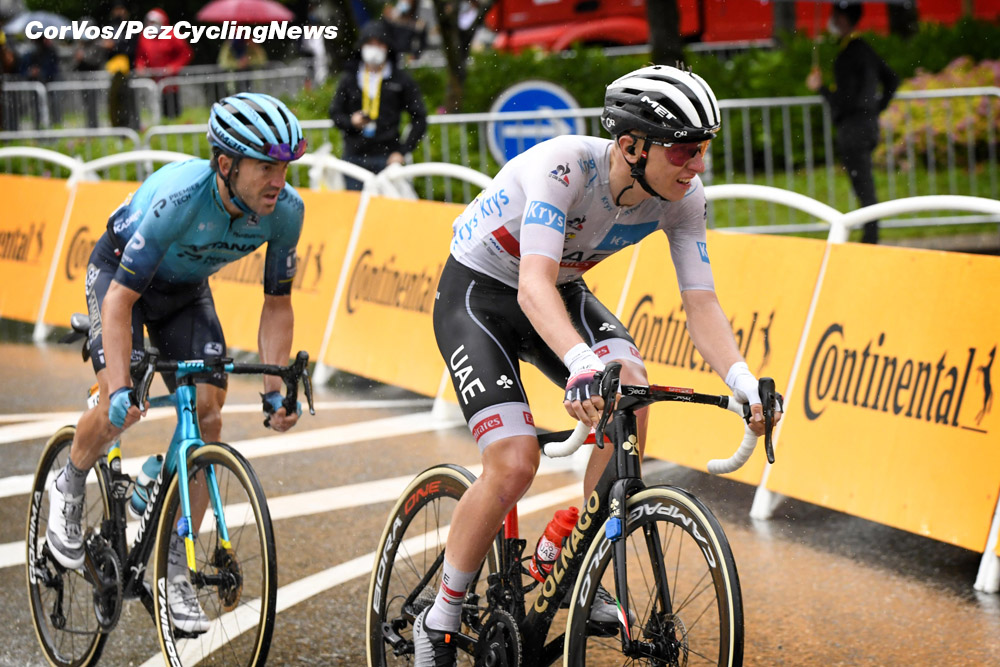 Pogačar caught and towed Izagirri and Woods to the line

At the foot of the Col de la Colombière, Pogačar’s lead was more than 1 minute over Carapaz and almost 2 minutes over a chasing group of Kelderman, Vingegaard and Gaudu, while he was 2:30 behind leader Woods and his pursuers at 1:30 seconds. Woods would not keep his lead. At 4 kilometres from the top, Teuns passed the Canadian, who was able to hold on for a while. Just before the top, Woods finally had to let go. 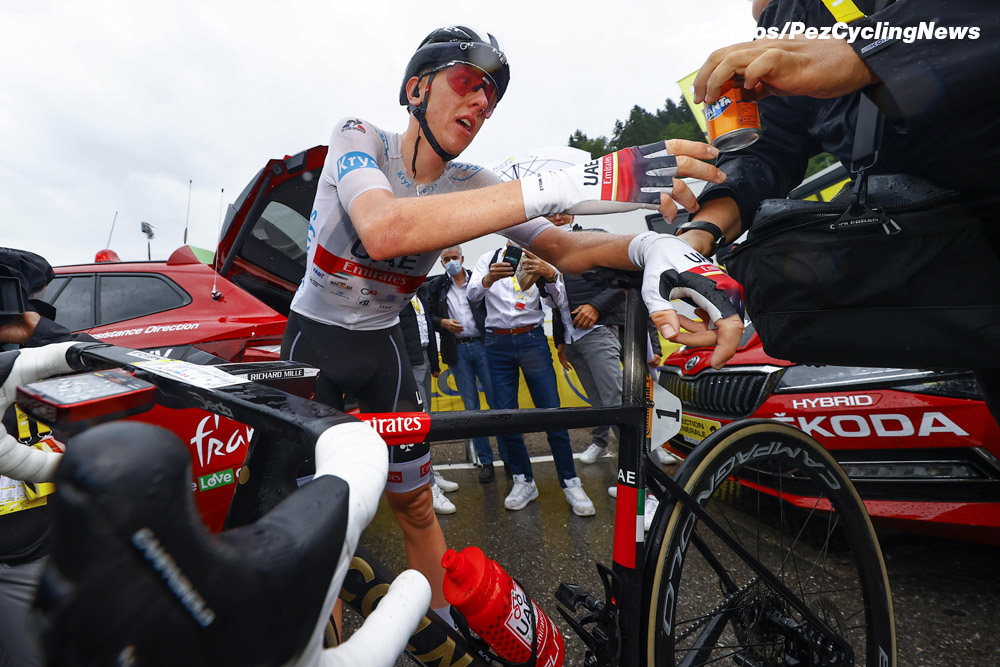 What a ride from Pogačar

In the last 12 kilometres the rapidly approaching Pogačar was the only rider that Teuns had to fear. Teuns was the only rider on the Col de la Colombière to stay out of the hands of the impressive Slovenian, albeit very narrowly. In the descent, the new yellow jersey wearer was still chasing the Belgian, but he couldn’t catch him. With 44 seconds on Izagirre, Woods and Pogačar, Teuns won the second Tour stage of his career. 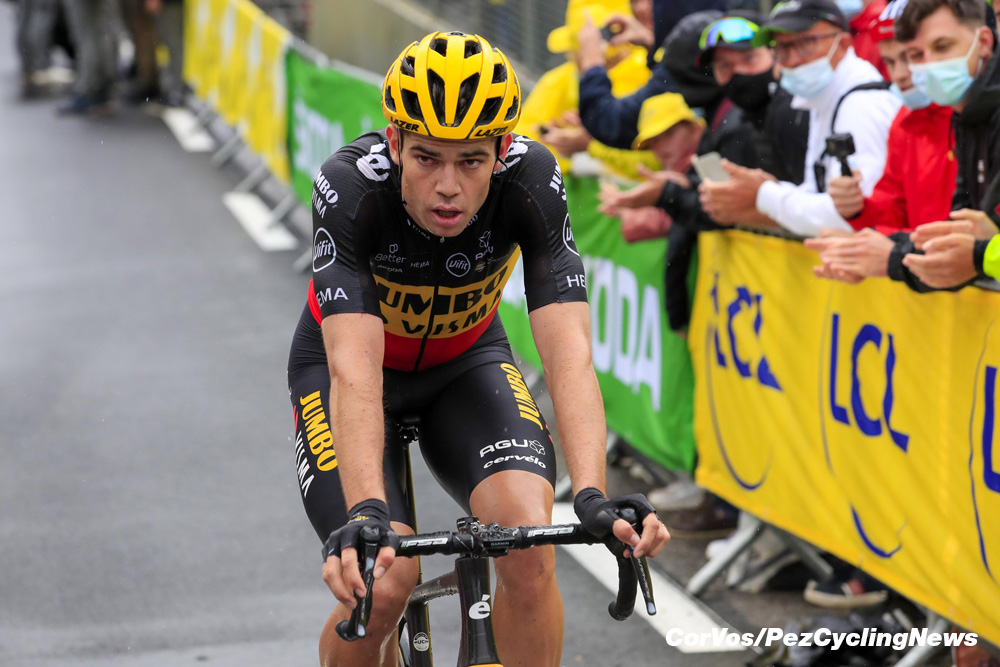 Stage winner, Dylan Teuns (Bahrain Victorious): “It has been super amazing. I have had a difficult year until now, as I had came short at every goal I had aimed at. Now I can finally celebrate. I want to dedicate this victory to my granddad, who passed away just before the Tour. His funeral was held only one week before the Tour. I was thinking of this during the last 10 kilometres: it has been very emotional for me. It was not an easy stage tactic-wise. The beginning of the race was very stressful. It was very hard for a break to get up the road as there were almost 60 guys going for it. In our case, Wout Poels was going for the KOM jersey, riding aggressively, and that allowed me to just follow wheels. On the second-to-last climb, many riders set a strong pace from the bottom and it was very hard for me to follow them. But later I found the right pace and it got better for me. On the last climb I was afraid Pogacar might catch me.” 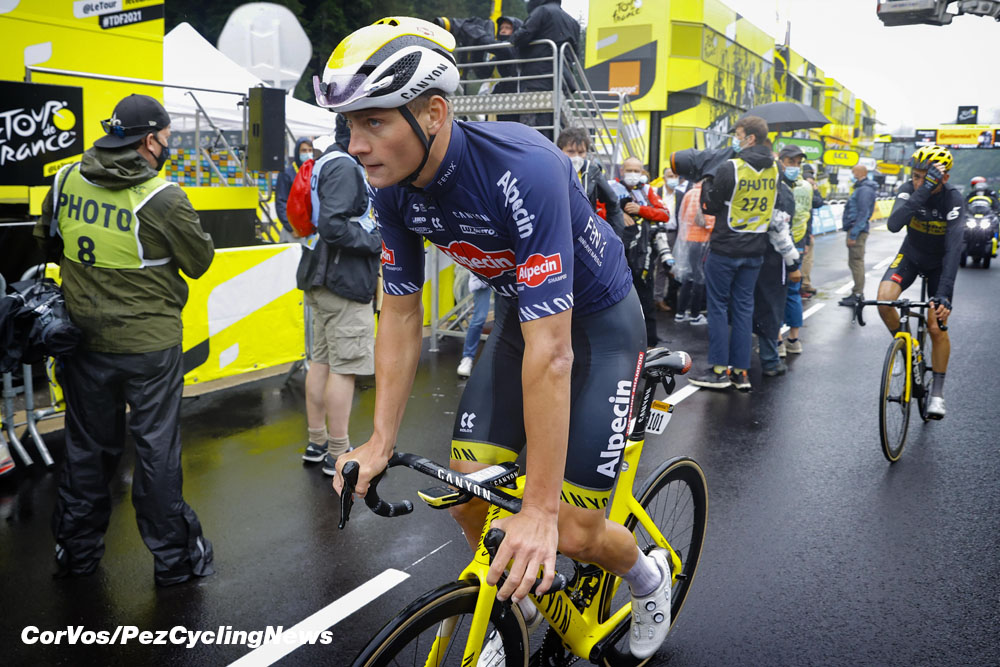 Overall leader and 4th on the stage, Tadej Pogacar (UAE Team Emirates): “In the morning we didn’t plan for me to hit hard today. We were rather thinking of waiting to see how the stage went. The start was super hard, very hectic, and I was even on the mix of a break. I feel great on this weather and, before the last three climbs, I told my teammates we were going to try and smash the race because I saw everybody was suffering. [Davide] Formolo, Rui [Costa] and Brandon [McNulty] did a super job for me to take off and go full gas all the way to the finish. I’m happy. The rivals thought they could break us as a team, but they have seen we can do a great work. I guess many riders paid the effort from yesterday. We will see day by day who my biggest rival is. For now, we have taken the yellow jersey and we have proven we have a super strong team.” 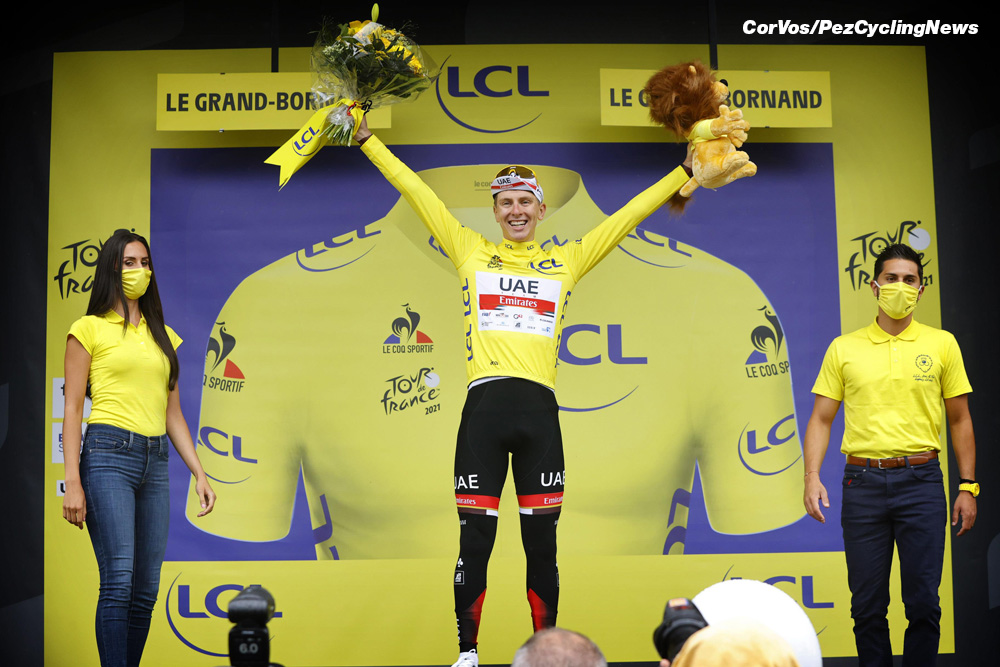 Tadej Pogačar – In yellow all the way to Paris?